Memorial Day - thank you veterans and all who served their country, making the ultimate sacrifice for us.  There are so many Americans who put their lives on the line every day for all of us, as we so sadly witnessed in Brentwood, New Hampshire last week.


There are more and more people around Lake Wicwas as summer approaches, and boats, docks, and floats are starting to appear on the water.  It's also a time when people get together to visit again after a long winter, with Memorial Day celebrations and BBQs.

While we are coming out of hibernation, more plants and animals are doing the same, including my favorite wildflower, the Trillium.


Trillium thrive in rich, acidic soil, usually in the shade of pine or spruce trees.  This pair lives hidden under the dense cover of a hemlock tree some 40 feet from Lake Wicwas.

Also deep in a hemlock forest, I heard the pounding of a Pileated Woodpecker working for its supper.  I followed the sound slowly and carefully, being fortunate enough to get a glimpse of it hewing into an old dead snag.  I watched for several minutes as it attacked one hole after another, harvesting whatever insects, grubs, and eggs it could find.


Black Cherry is blooming now, attracting pollen-collecting insects of all shapes and sizes to their flowers.  If you walk by on a calm afternoon, you can hear the collective buzzing of hundreds of tiny wings from three of four feet away. 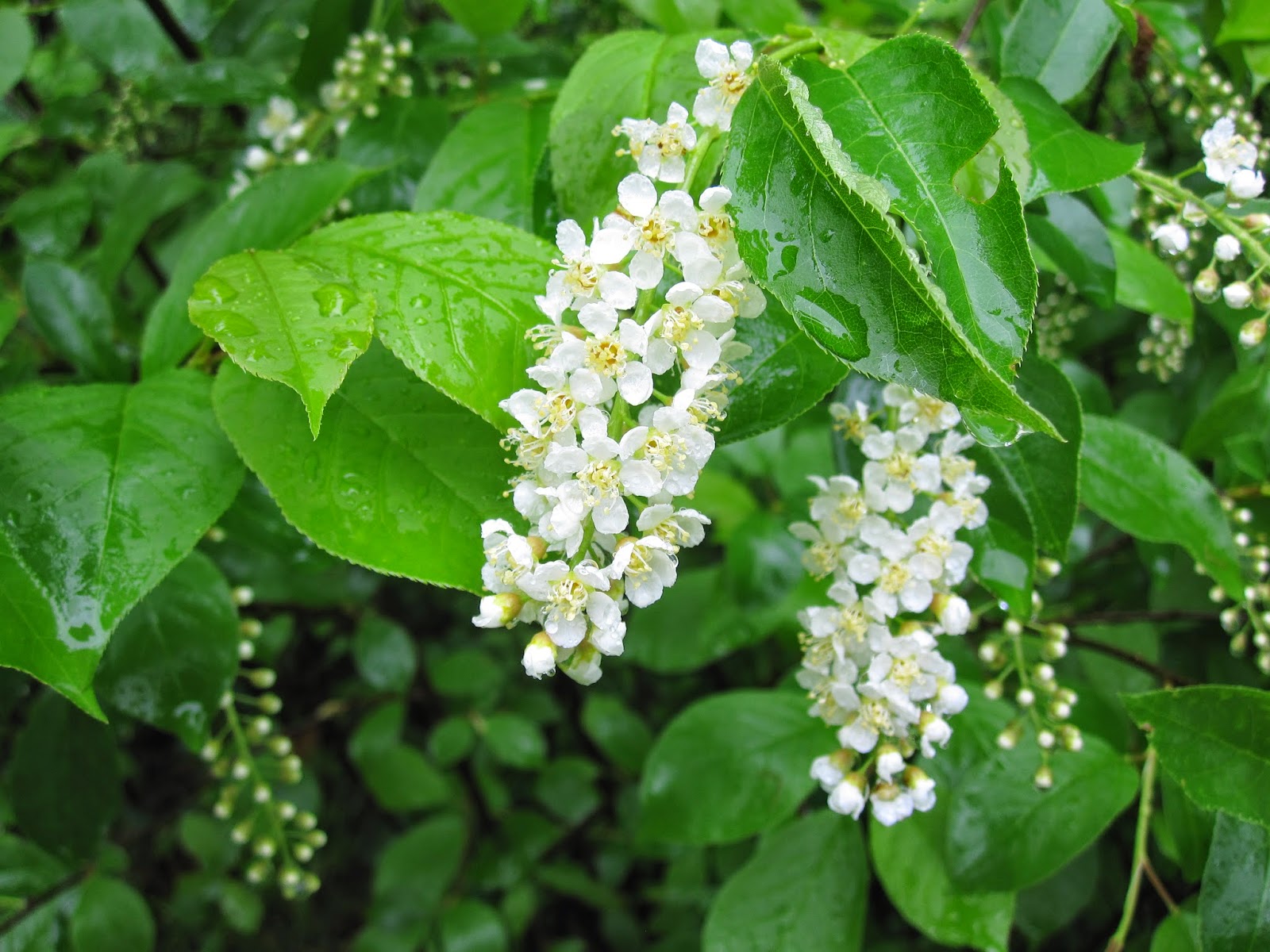 This unknown bee has good-sized pollen sacs - called corbicula- on its hind legs.

The Red Maple leaves were nearly full size last week;  compare that to the oak leaves, which are now just forming.

Here's a size perspective - why are these trees on such different schedules? 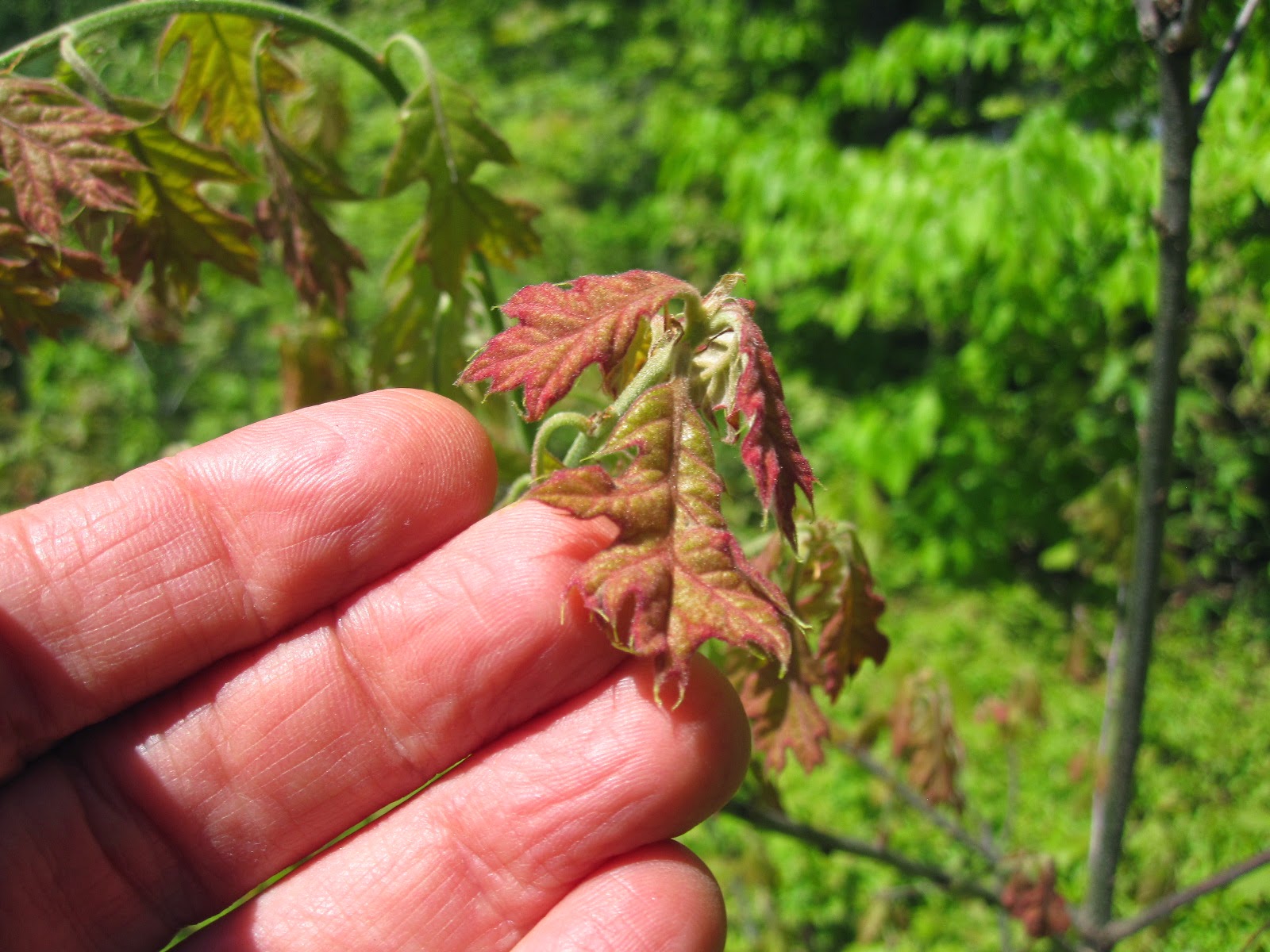 The vernal pools will be drying up soon, so  the amphibians that breed there will be moving on. I found this Red Eft (newt) on a damp trail one morning.

The terrestrial eft is a juvenile, having spent the first phase of its life in water as a larva, but not yet mature enough to be an adult when it will return to water to breed.

The wet weather this spring has been favorable for moisture loving creatures, such as this Leopard Slug, sliming its way along the ground.

This big, juicy shell-less mollusk would be great meal for a snake.  This thought came to mind after I discovered a reptile I have never seen before, and may not again:  a Smooth Green Snake (what a great name!).  They are reportedly rarely seen due to their superb camouflage and tendency to stay amongst the low grasses and green plants, feeding on spiders and insects. 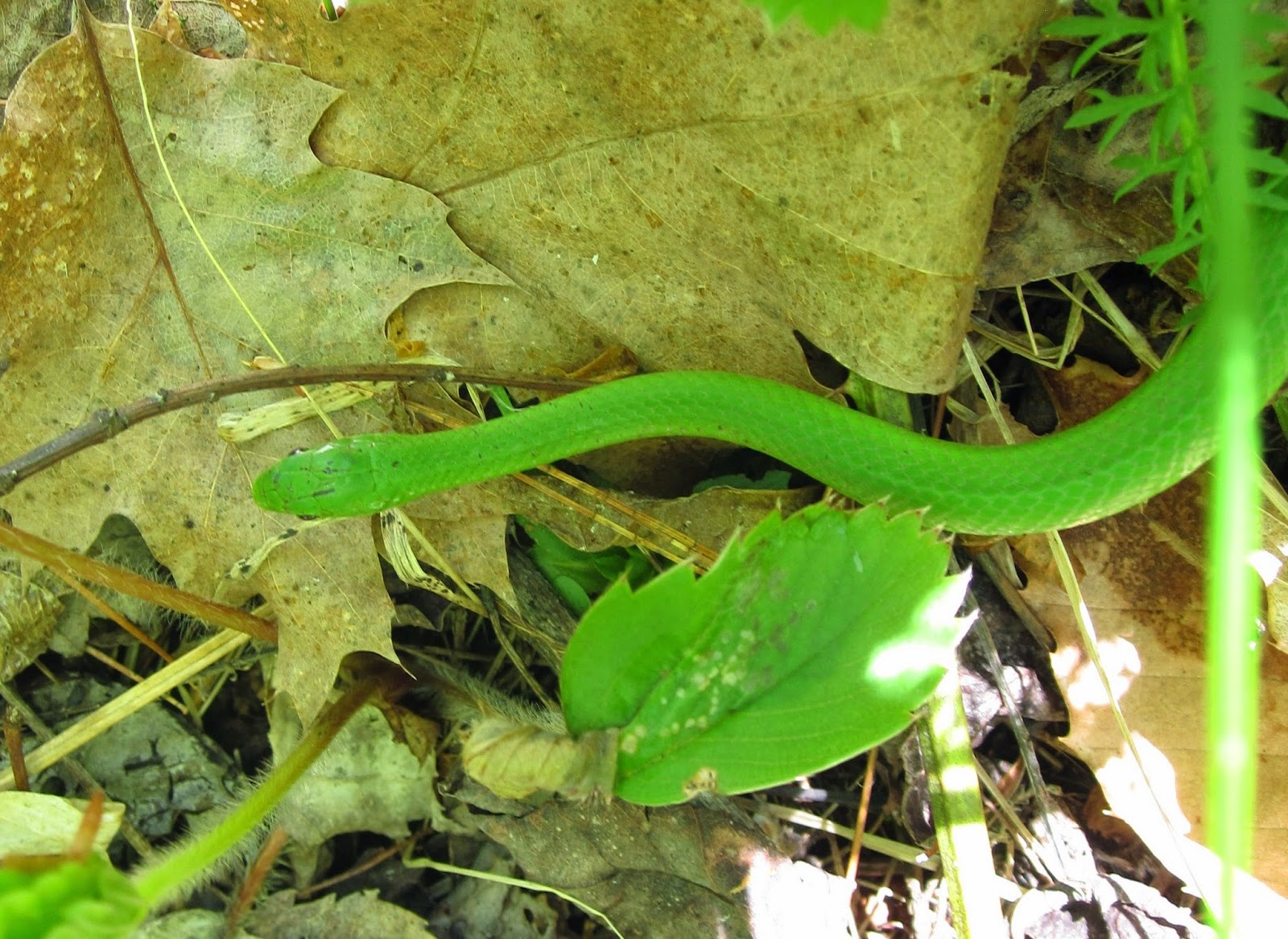 Speaking of spiders, no snake is going to get this spider!

Hanging from its silk three feet above the ground, this orb-weaver is safe from snakes and other ground predators.  However, it was dangling only feet away from the robin's nest;  that seems like an easy meal for mother robin!

And the robins - sure enough, three days later, there were four eggs in the nest.  The incubation period for robins is 12 to 14 days, so perhaps next week there will be tiny birds peeping madly for their first meal. 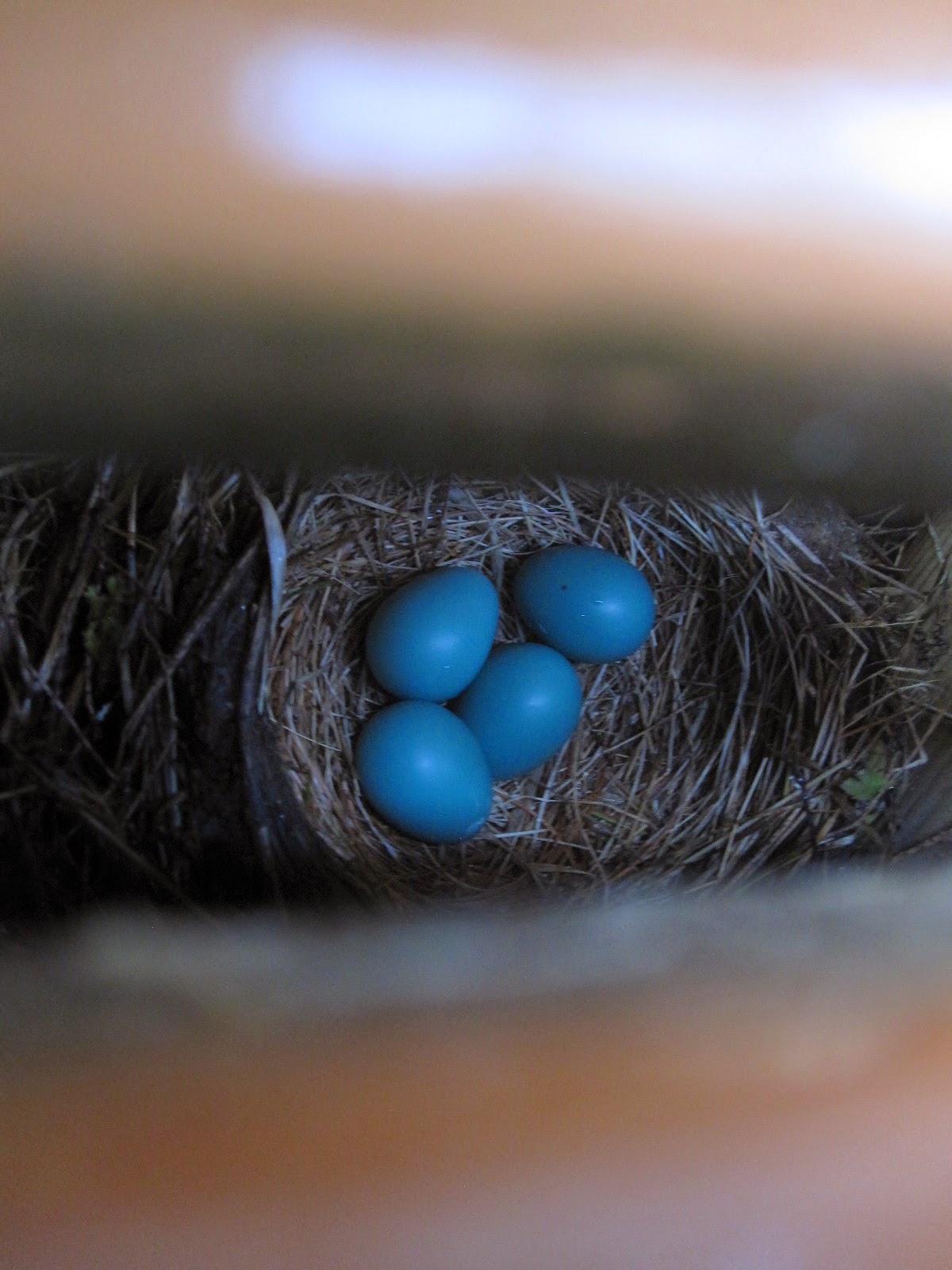 The robins are doing their part to paint patriot pictures for Memorial Day!

Posted by Scott Powell at 7:35 PM No comments:

Signs of growth, renewal, and rejuvenation are everywhere around Lake Wicwas now.  The small, delicate wildflowers that emerge in the spring are coming into their full beauty, and with them arrives a wide range of insects that feed on the blossoms' nectar.


Continuing with the progression of the Red Maple, the leaves that were tiny proteges grew rapidly in one week to become full-fledged photosynthesizing chlorophyll factories. 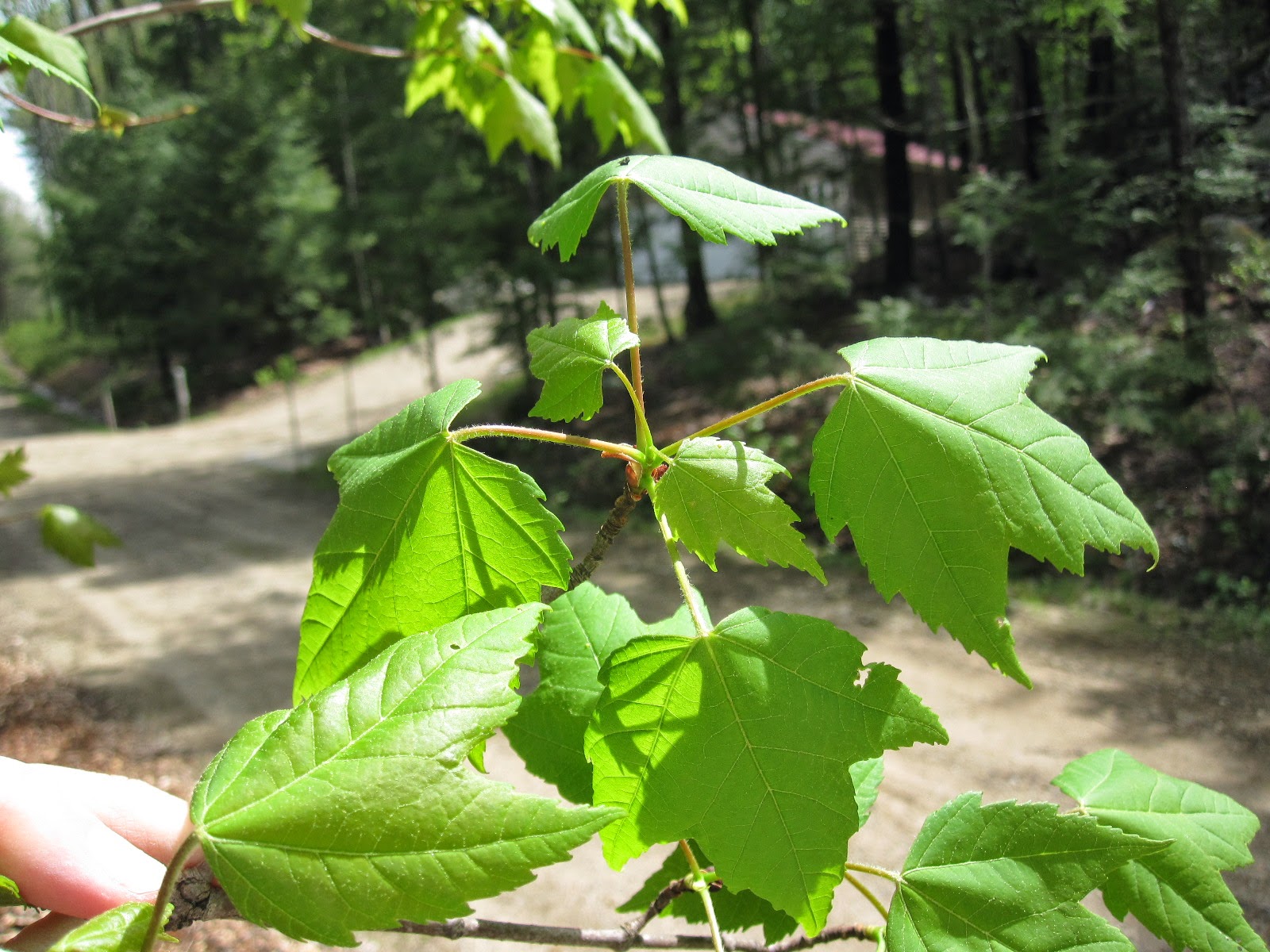 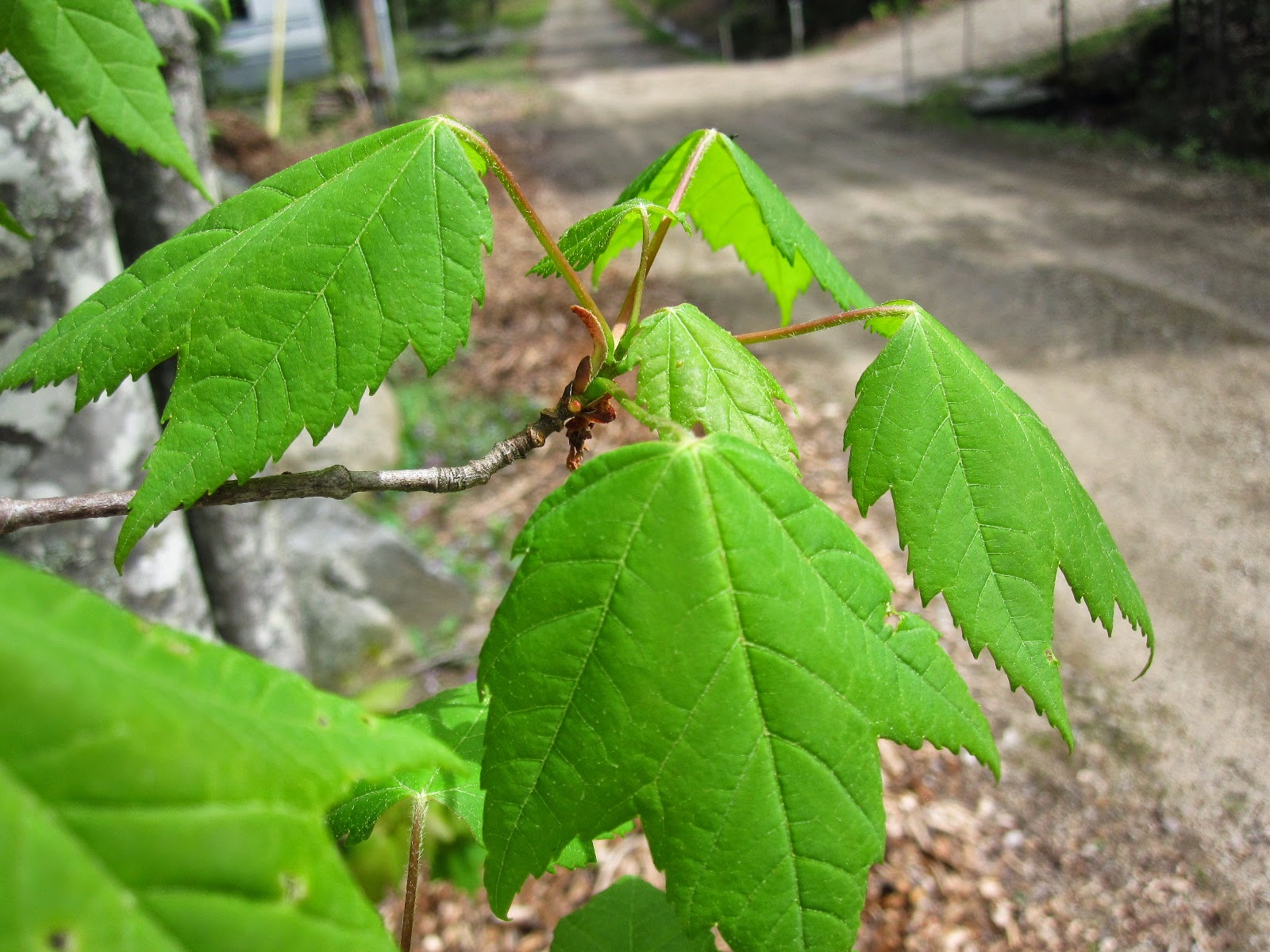 Being the only trees to have developed large, green leaves, the forest is still wearing its early spring blazer of pale, yellow-green hue. 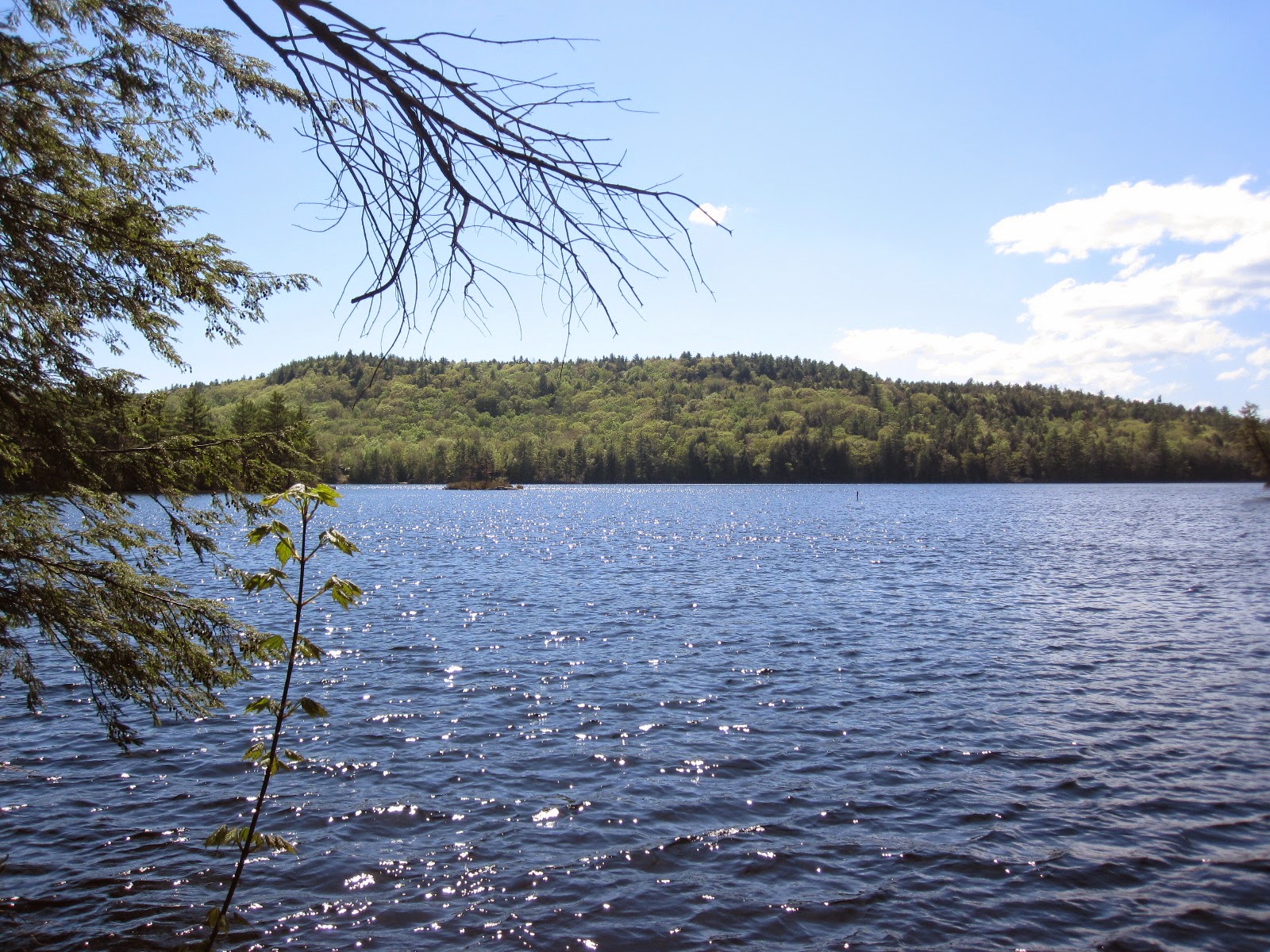 Another sign of renewal - a bright blue Robin's egg appeared one day. 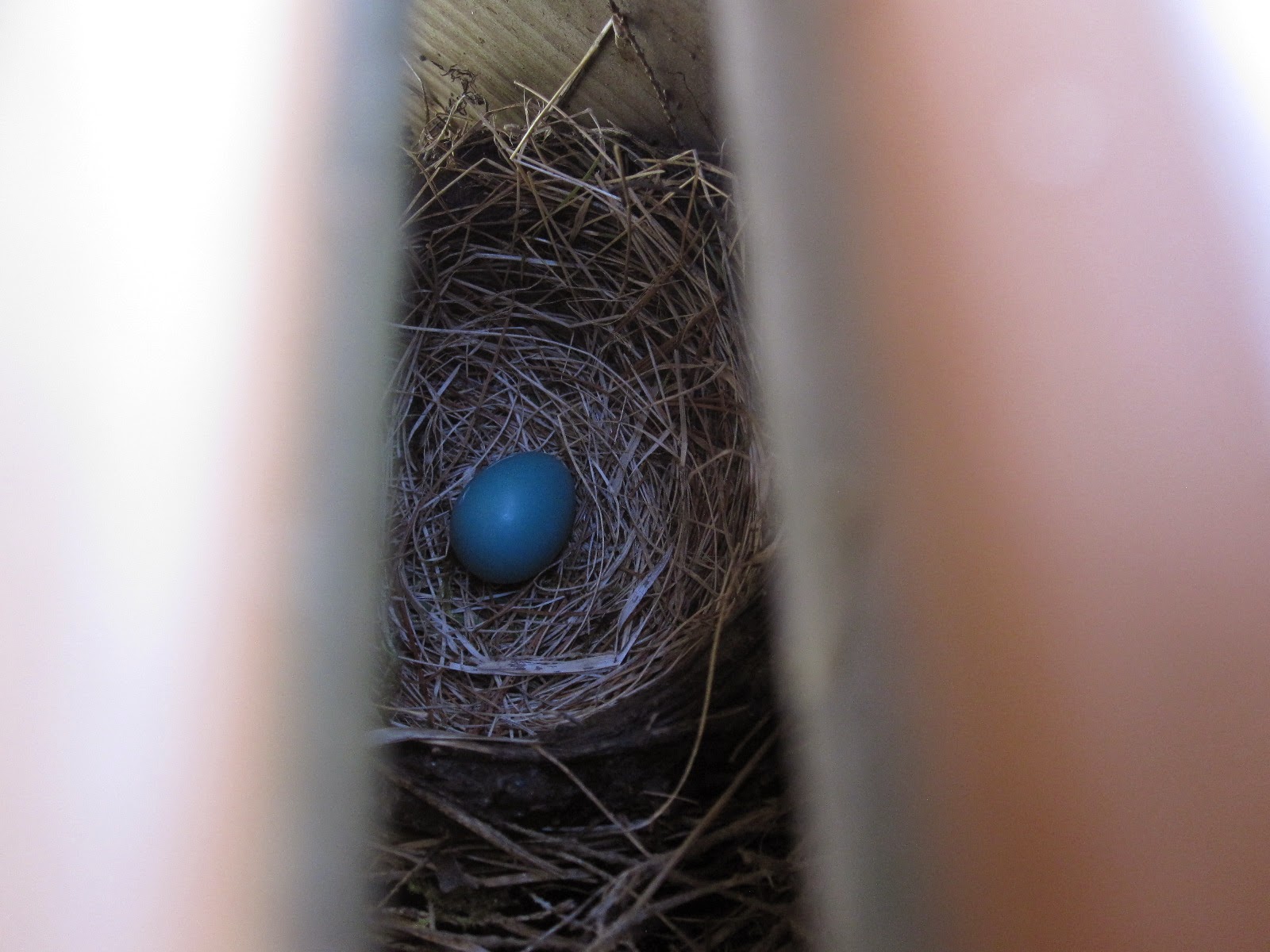 This particular beam has fledged baby robins before;  it is likely that by now another one or two eggs have arrived.  I hope I'll be able to follow this story of birth and development - it will require care and attention to not alarm the caretakers.

I wonder if the loons have selected their nesting site yet....
Posted by Scott Powell at 10:21 PM No comments:

Happy Mother's Day!  Mother nature gave her best today, providing all mothers with a fabulous day at Lake Wicwas - warm and sunny with a deep blue sky reflecting off the water. 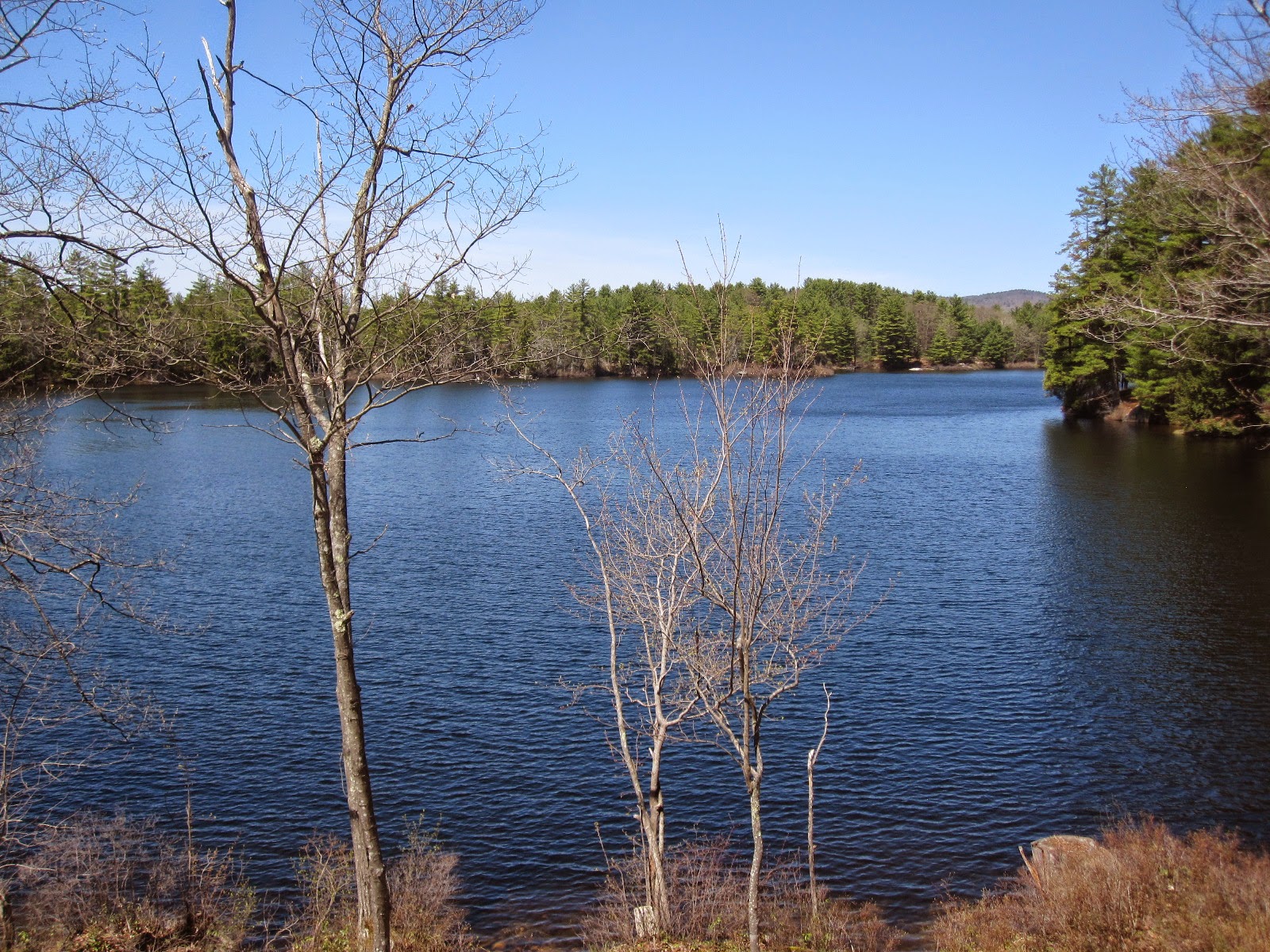 The warmer weather has brought along the trees, as more buds are swelling and starting to pop.  The Red Maples are the first to have pushed out early, tiny leaves. 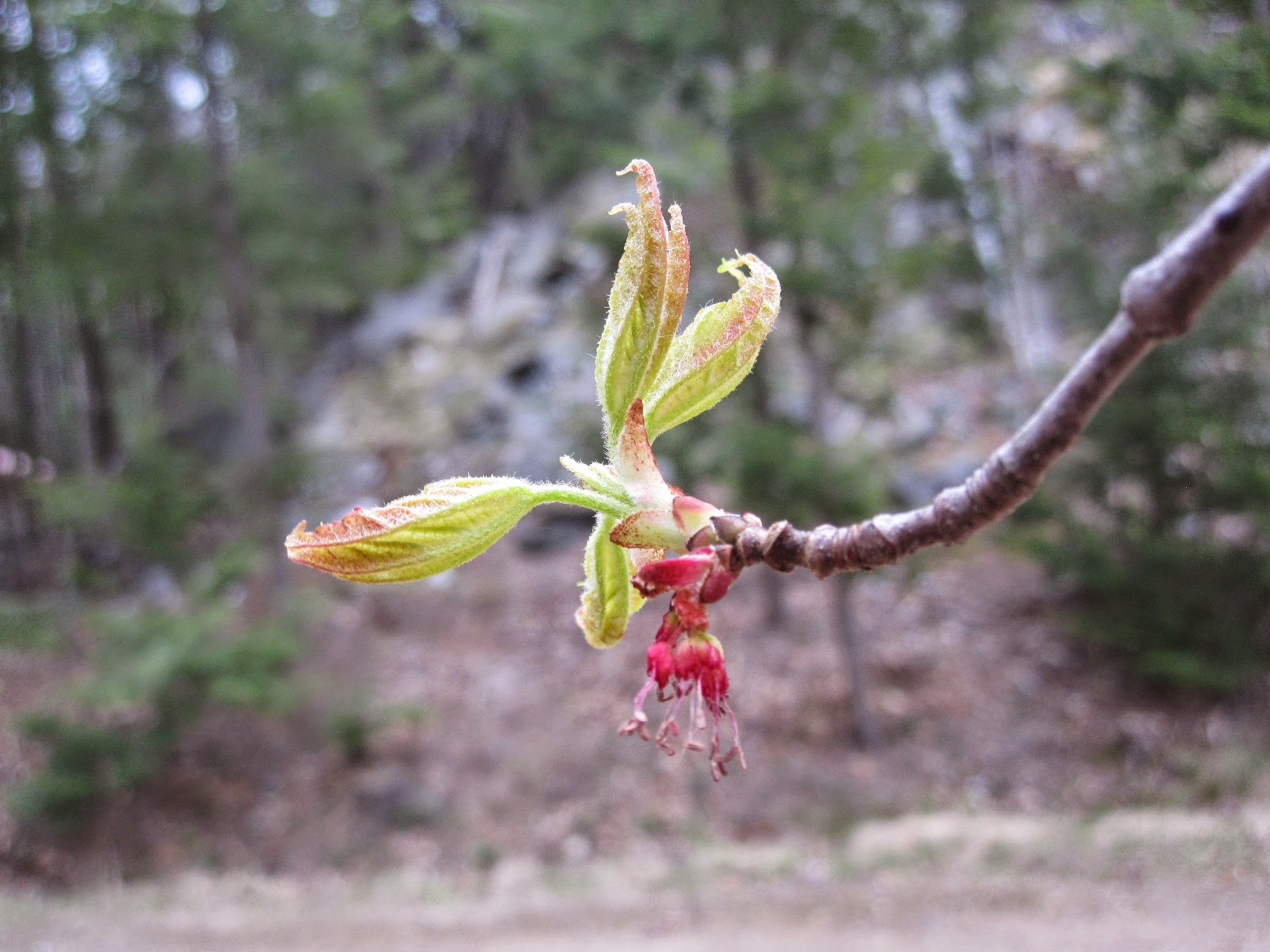 And then just two days later, they are already exhibiting the familiar structure of the maple leaf.
The Sweet White Violet is blooming in the sunniest locations and the Canada Mayflower and some ferns have sprouted, adding some green to the otherwise brown and drab forest floor.  . 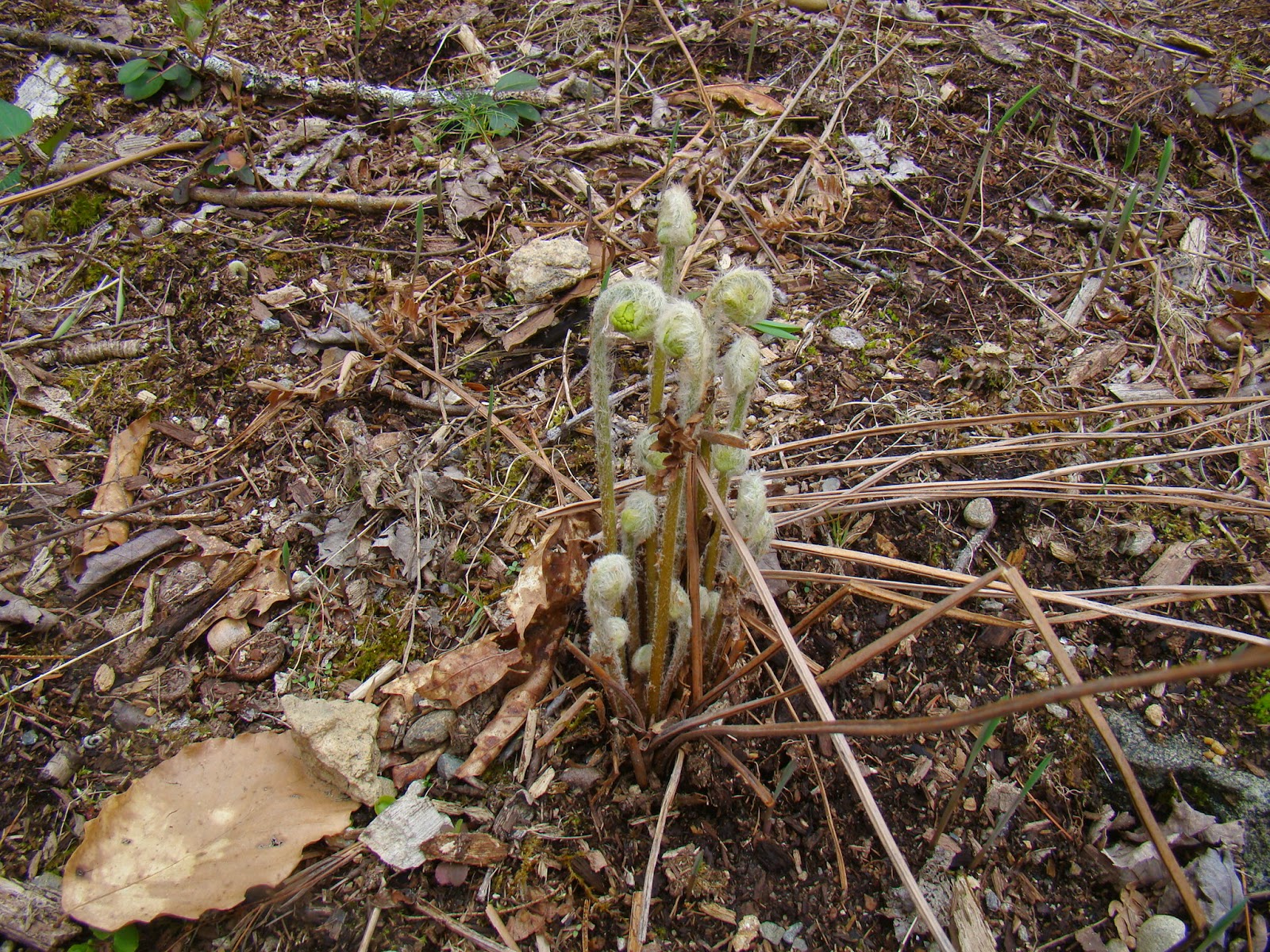 The lake is still high, and the outlet flowing rapidly;  the streams emptying into the lake are full and wide.  The high sun and open canopy allows more light to penetrate than during any other season, which aids in warming the ground, fostering the growth of the new plants. 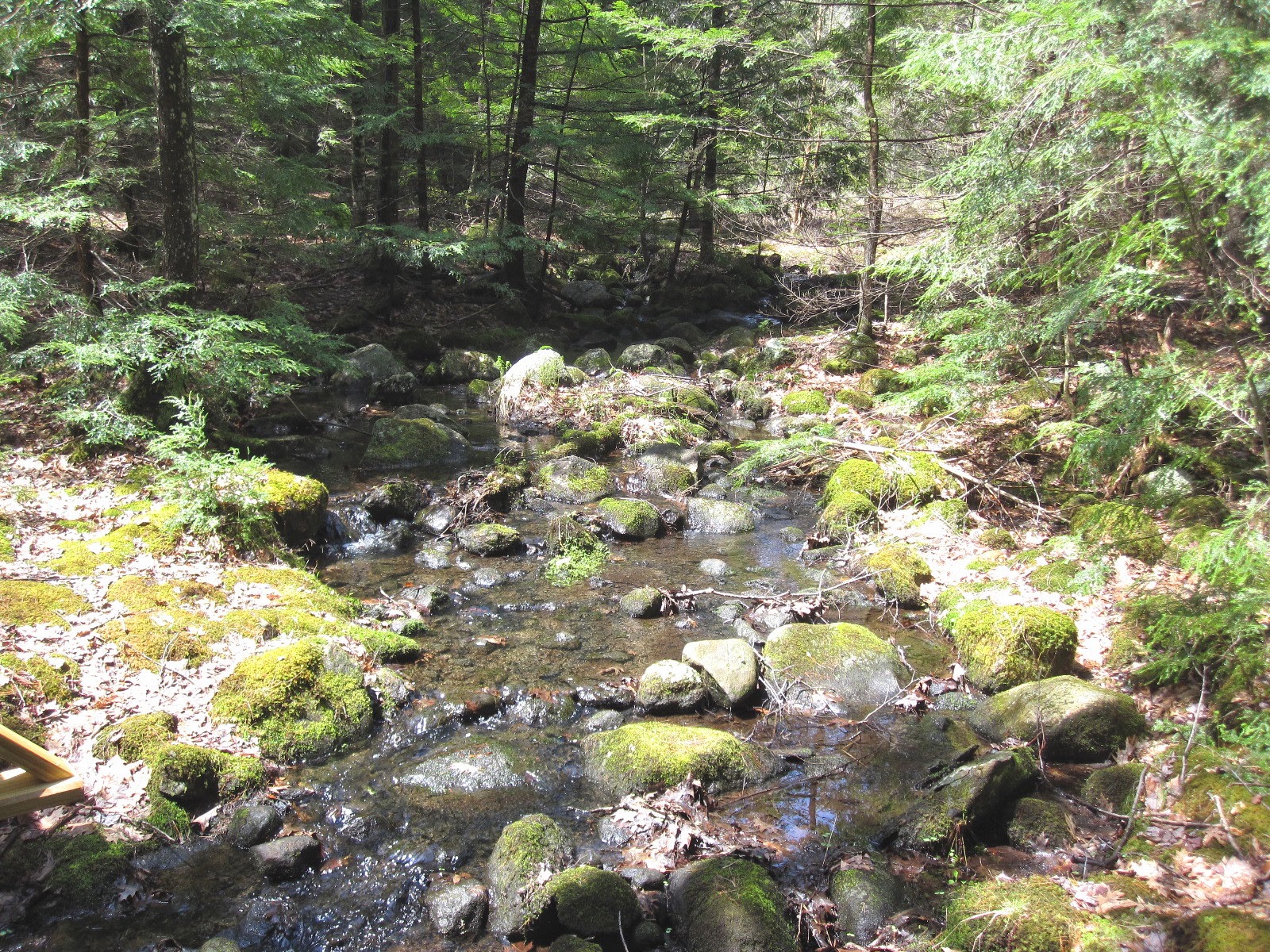 And my now good-friend, the garter snake was out enjoying the sun again as well. 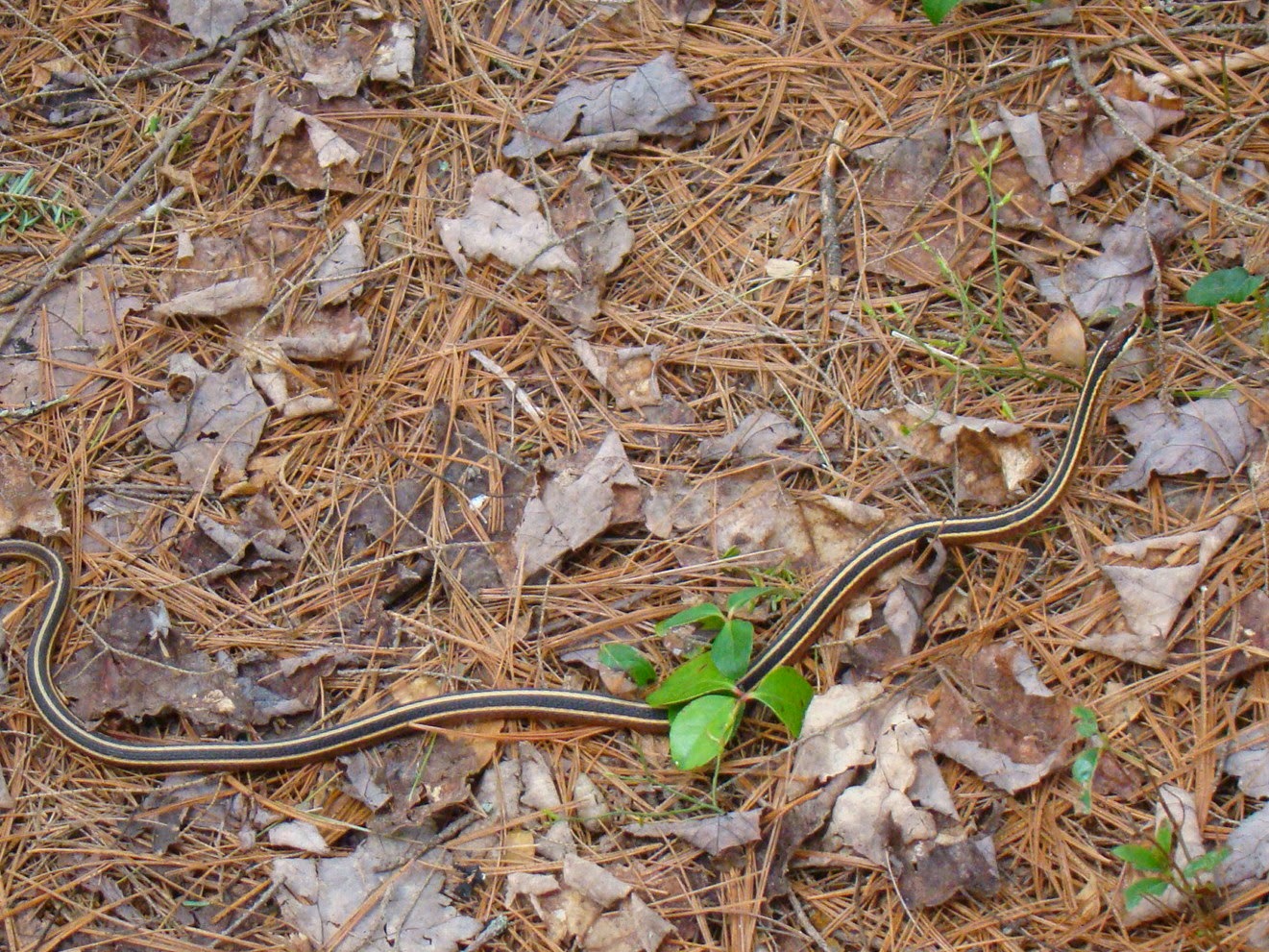 Watching the surface of lake I noticed little wakes being made by small animals, thinking at first it was a snake, but soon realizing there too many of them and their travel pattern wasn't consistent with a Water Snake.  So I took my first kayak trip of the year to investigate.  They were made by an insect about half an inch long, which I think is the Water Boatmen.  I couldn't get a picture but here's a photograph of a Water Boatmen from the North Carolina State University web site.

Continuing along the shore of the lake, taking advantage of the high water and lack of pond weeds, I saw many turtles sunning themselves wherever a spot providing good exposure.  This log had six or eight turtles all lined up it, which I didn't notice until I heard them splooch, splooch, splooch, one after another into the lake. 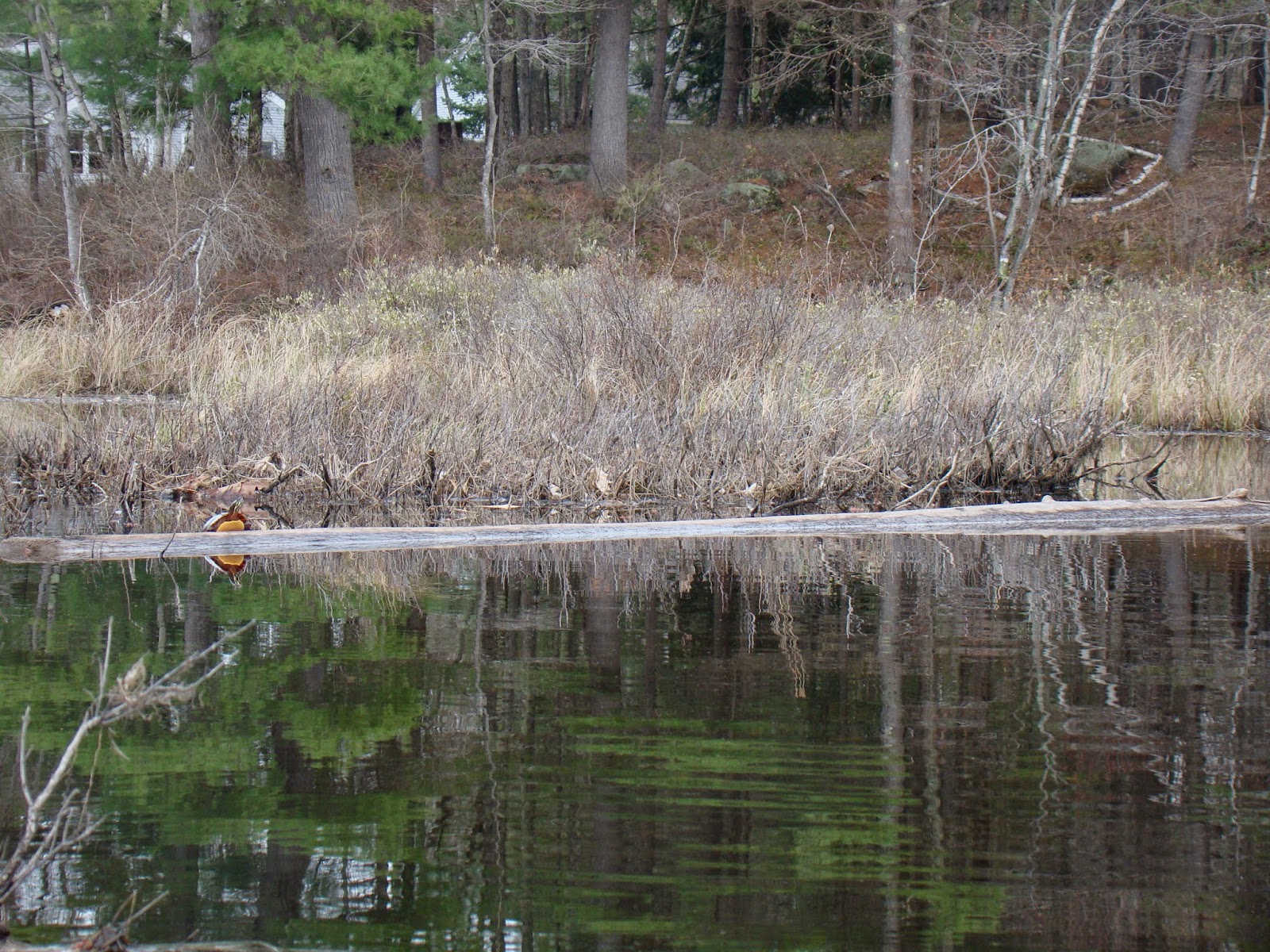 Soon their scout came back up to see if the coast was clear.

I identified a new shoreline plant that is blooming around Lake Wicwas.  This is known as bothLeatherleaf and Cassandra, and is an evergreen member of the Heath family.  It is responsible for much of the deep red and maroon color that appears all along the shore of the lake in the late fall when its foliage turns.
Meanwhile, at the bottom of the lake, plant growth is starting as well;  in the shallows I could see the pond lilies putting out leaves that will soon rise to the surface.


The flycatchers and song birds are arriving in large numbers now;  I watched a group of them doing acrobatics as they feasted on bugs over the water, and the raspy call of the Phoebe is heard frequently.

Last night I captured a picture of a fox;  it still had its bushy winter coat on.

I suppose it is still cold in their den, and with nighttime hunting, a warm coat is in order for a little bit longer.

Back up at lake level I came upon the male Wood Duck in the cove near its nesting site.  No sign of mom - she's at home working at the nest.  I'm sure dad is out finding her something special to bring her for a mother's day treat!

Posted by Scott Powell at 10:19 PM No comments:

The Lake Wicwas Music Festival has returned for its 2014 season.  Their season opener presents a well-know chorus consisting of a full complement of amphibians, featuring in particular the Spring Peepers.  These free concerts are open to anyone who partakes in an evening walk - or just opens their window.


Later in the season the troupe will add featured soloists such as the wood frog and that famous bass player, the bullfrog.

At the conclusion of the opening night performance, the musicians were presented with a fragrant bouquet of spring's first wildflowers;  the Trailing Arbutus being the first to bloom as usual.

There is still great visibility in the woods before the leaves fill in the open spaces.  I saw the Osprey and  a Hawk sitting up high in the trees.  I didn't see another late-night vocalist, but I did hear the first Barred Owl hooting one night under a crescent moon.  This time of year also reveals just how large the cliff is behind Lake Wicwas.  During the summer all but the top of it is hidden behind tall trees, but presently a substantial portion of the sheer face is visible.  There was a group up on top enjoying the beautiful weather on Saturday.

We still haven't had a warm stretch of weather, and the flowers and trees are a bit behind schedule, but only by a few days.  The Red Maple leaves have progressed to the point where the first emergent leaves are barely visible.

I was able to find a bit of ice still hanging on deep in a crevice in the ledges, but it won't last much longer now.

It sure is heartwarming to see the sun, moon, and bright mornings reflecting off liquid water. 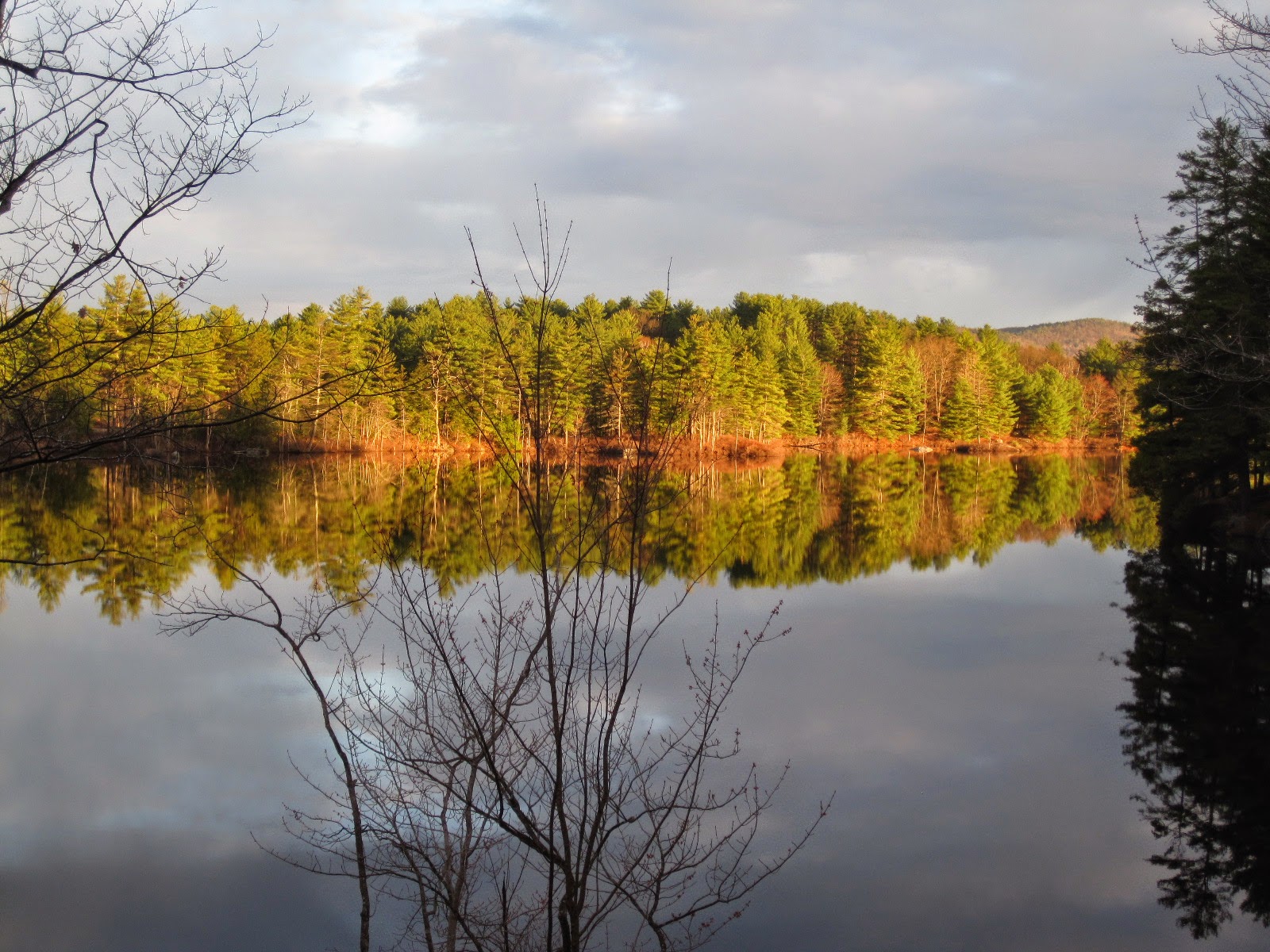 Posted by Scott Powell at 7:33 PM No comments: