We spent some time on a much different lake last week, Lake Powell, in Arizona and Utah.

This lake is 168 miles long, though much of it is winding canyons once you get a few miles from the Glen Canyon dam which holds back all that water. 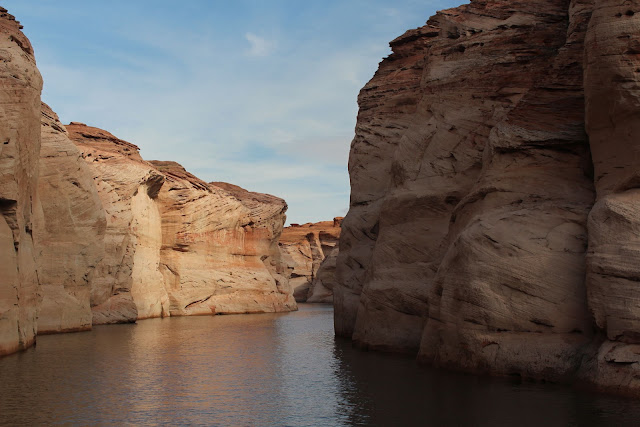 Just below the Glen Canyon dam is one the most impressive sights on the Colorado River, as the river has worked for millions of years to carve out a huge horse shoe right through the rock. 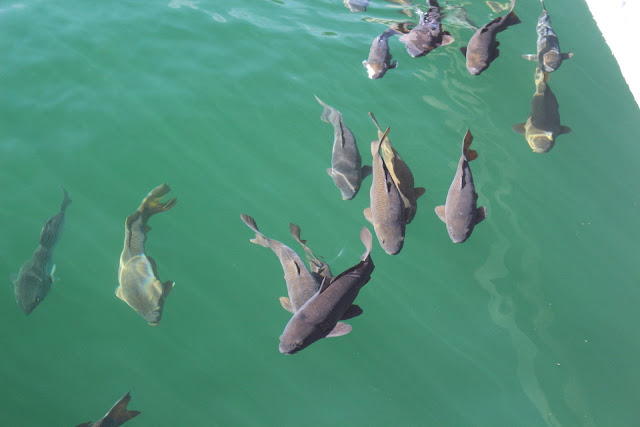 I was surprised to learn that even below the dam the river was altered, as the lack of silt flowing in the river (the lake catches it all) allows more light to penetrate the water, letting algae and other plants flourish, creating the green water below the dam.
But about 12 miles downstream a major tributary, the Paria River, joins the Colorado.  We were there right after a good thunderstorm, so the Paria was full of red silt, and at the confluence just below Lee's Ferry, we saw a two color river - red on the west side, green on the east side, though it's hard to see in these pictures.

A few miles farther downstream, at Navajo Bridge, the mixing was nearly complete, and the Colorado had returned to the color that that gives the river its name.


The river may look like this until it reaches Lake Mead, behind the Hoover dam where the silt will settle out again.  Of course, with all the water being extracted, the Colorado River doesn't make it to the ocean anymore before it dries up.  Imagine what that has done to the habitat farther south.  However, they are working on restoring indigenous fish populations, and are looking at renegotiating the water contracts to allocate more water to the country of Mexico.

And what would a Lake Wicwas blog be without at least one wildlife shot (real wildlife, not invasive fishes!) and a look at the lake in peak foliage season!

Posted by Scott Powell at 7:00 PM No comments:

It has been interesting watching the wildlife in the southwest and comparing the similarities and differences to those in New England.  Some species are quite similar, yet have sometimes subtle differences as they evolved in a different environment.  A good example are the deer.  They are similar in size and shape, but their coloring is different.  In New Hampshire they are often reddish-brown to blend in with the colors of their New England forests, while here they are more gray, which is much better camouflage in this habitat;  they blend in so well I didn't even notice this group until I was right next to them, and even then, only  because they moved. 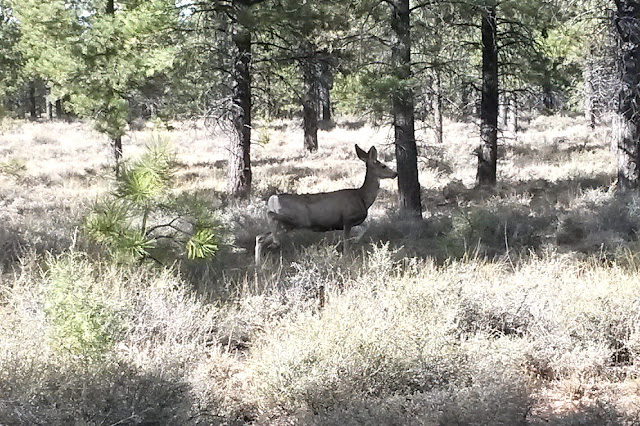 This behavior is the same as our deer exhibit - even to the point of curiosity sufficient that they stood and watched me go by. 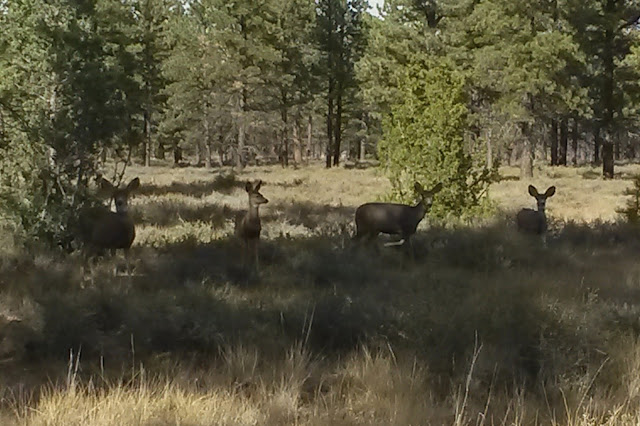 But their mode of transportation is much different;  our deer bound, leaping up with the front legs first and then pushing off with with hind legs so their bodies move in an arc.  These deer jump with all four legs at once, moving up into the air with their body horizontal, looking live overgrown rabbits hopping across the scrub - a very different and amusing sight!

The following day at Zion Canyon I spotted a deer in a most unusual spot, all alone in the middle of a cliff. 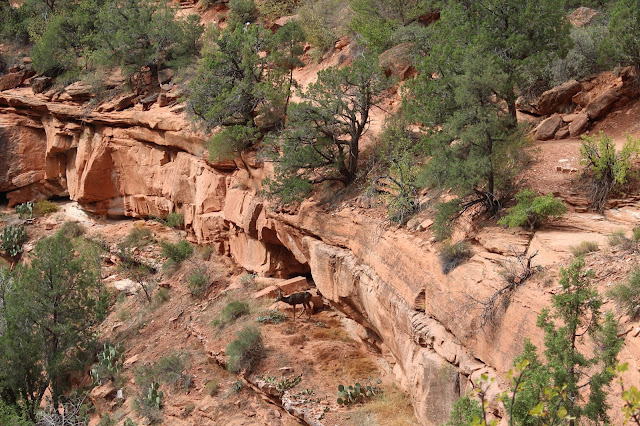 It wasn't until I expanded the picture that I discovered why it was there - do you see what's unusual? 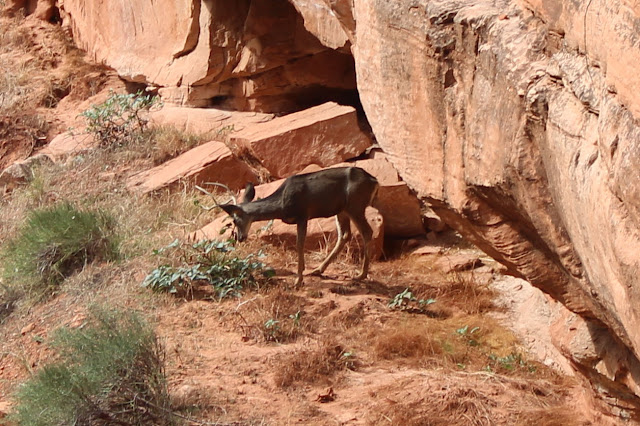 Another animal similar to ours is the golden--mantled ground squirrel (Callospermophilus lateralis) which is almost identical to our chipmunk (Tamias striatus), but different enough to be considered a unique species.

There is also an insect here that is similar to our flying grasshoppers.

I believe this is a Mountain Meadow Grasshopper, also known in Utah as a "Snapping Grasshopper".  But this western version is much more dramatic than ours when it flies, as it local name suggests.  Our version makes an occasional little "click" as it flies, and shows a little bit of yellow-green color, but the western insect makes a long series of clicks that is so loud it is startling.  And it displays a bright yellow abdomen that is completely incongruous with its drab gray body when stationary - more good camouflage when at rest.

I also saw signs of Elk, but haven't seen any yet.  We don't have elk in the east anymore;  the closest animal in New England might be the moose.

An insect I saw right on the trail in Zion National Park, a Jerusalem Cricket, is nothing like our cricket in New Hampshire:
This insect is almost 2 inches long;  you can gauge the size somewhat by the footprint it is next to.

Finally, a reptile, nothing like which exists in New England, was beside a trail we hiked.


I don't know anything about lizards, but I think this is a Sagebrush Lizard (Sceloporus graciosus).  Perhaps our salamander - an amphibian - is the closest relative living at Lake Wicwas.

All of these creatures, except for the three-legged deer and the Jerusalem Cricket, I saw in the area around Bryce Canyon in Utah - one of the most spectacular areas I have ever experienced!

Posted by Scott Powell at 8:28 PM No comments:

The leaves are  starting to turn in New Hampshire (thank you LC!), while out in the west the colors range from full green to completely gone depending on elevation and available moisture.


I have been avoiding this post for quite a while, but now that I am away from the lake perhaps it will be a little easier to relate the sad news that many already know:  neither of the Lake Wicwas loon chicks survived this year.   As reported on August 9th, one chick was killed by a rogue loon - there were observers of the fight and the dead chick was recovered.  The fate of the second is unknown, but I can only surmise that the rogue came back to finish the job.

Loons are terribly territorial;  they also have a strong instinct to propagate their own gene pool, strong enough that they will kill their own species to provide better prospects for their own offspring, even if they don't have any of their own at the moment.

I had seen a single loon on the lake for much of this summer as well as last summer, spending most of its time in a single cove far away from the pair.  I wonder if this loon decided it wants Lake Wicwas for its own, and acted to drive our resident pair away.  Is our nesting pair becoming old and weak, unable to defend its territory and its offspring against a younger, stronger animal?

Recently there was a loon on the lake with a juvenile appearance, but after a check with John Cooley at the Loon Center, it appears it is an adult loon that started to molt its summer colors earlier than usual.  This was interesting enough to be noted in the Loon Preservation Committee's latest news letter!


Fortunately, the reports from other lakes in New Hampshire are much better, with high rates of successful chick hatchings.  We'll have to wait until later in the fall to know how many make it through to fly off for the Atlantic Ocean.  The outstanding photographer Kittie Wilson, who often observes on Pleasant Lake in New London, took some fantastic pictures of the young loon on that lake.  I've seen pictures of the adult loons catching small fish for the young one, but I've never seen one quite like this.

And she collected evidence that they don't only eat fish - here's a shot of a parent bringing up a crawfish for junior.


Somehow she also managed to get photographs of the loons as they swam under water.  It's the first time I've seen what they look like while diving - their feet stretched out behind them, propelling them through the water.


So thanks to Kittie we can at least enjoy the success on Pleasant Pond, even as I fear that if we are successful in increasing the loon population in the northeast, there will be more similar territorial battles over our lakes.  Nature is an unforgiving test of survival of the fittest, strengthening the gene pool, and is why the Common Loon has survived for millions of years.  Note that Ms. Wilson also writes a weekly nature journal which you might enjoy - you can email her at lanesend2@tds.net - ask to be added to her distribution list.


We on Lake Wicwas will remember Freedom and Liberty fondly. 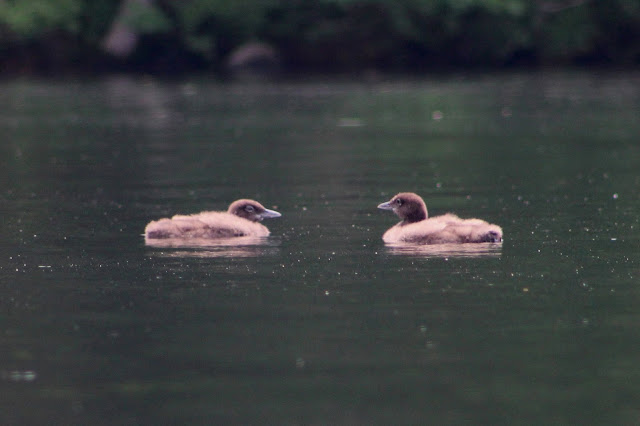 Posted by Scott Powell at 9:52 PM No comments:


I was excited when a fellow nature watcher acquired a trail camera and placed it at the shoreline of Lake Wicwas near the conservation area on the west side of the lake.  It didn't take long before he caught several wild creatures visiting his shore.  The first customer was a well fed raccoon, sniffing along the ground looking for a bit more food to add to its winter store of fat.

The raccoon was followed soon by a skunk (photographed at an angle that doesn't reveal the usual trademark white stripe).

And then good size beaver arrived, having just climbed up out the lake, as indicated by the ripples in the water.

This is harvest time for beavers, when they collect trees to stick in the mud at the bottom of the lake for their winter food supply.  You better guard your trees, or you may soon have your own fresh stump to be a nursery for a new generation of life!   (Reference last week's post.)

Talking about watching out for animals, it's always a good idea to keep a close eye on small pets, especially cats, as we have a good supply of Fishercats in the area that will take even a good size cat for their supper.  But we also have other predators to look out for, and his trail camera caught one of the most elusive - the bobcat!


It's a little blurry as the cat must have been moving along quickly, but the short tail, rounded ears, and the markings down low on it hind legs are clear identifiers.

This spot is a great location for wildlife, being right at the edge of many acres of undeveloped property, but any of these animals - except perhaps the bobcat - can make an appearance most anywhere around the lake.  And of course, it's prime bear season, as they are fattening up for their winter slumber, so hold off on those bird feeders a few more months.

Thanks for sharing Dave!


This week I spent some time on some very new mountains in Colorado - they were formed only about 50 to 80 million years ago.  Contrast that to the mountains in New England, which are between 200 million and 400 million years old (see March 7, 2015 post).  This explains why the rocky mountains are much higher and more dramatic than the white mountains - they have had far less time to be worn away by wind, water and ice.

Posted by Scott Powell at 11:17 PM No comments: