Lake Wicwas is frozen!
The cold night on Thanksgiving did the trick, with a solid layer of ice across the entire lake on Friday morning. Most of the surface is smooth, with only a few rough areas that froze up in windy conditions.  If this holds, it will tie a record for the earliest ice-in that I have seen.

The ice was not even an inch thick, but it was crystal clear and sturdy enough to bear my weight (a foot from shore that is). 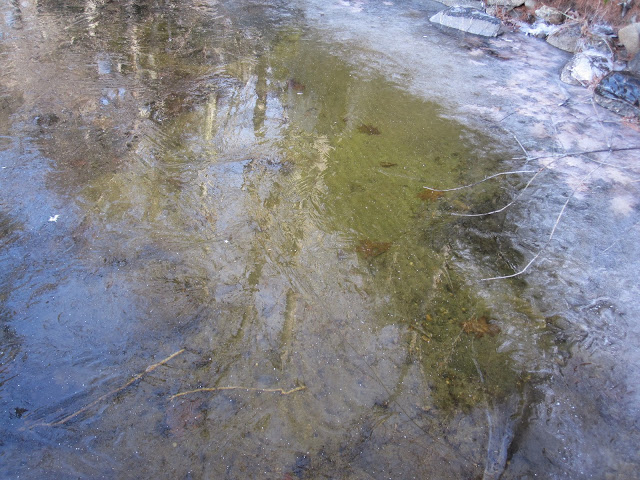 Standing on it, I could see the ice flex, pressing down into the lake and pushing water up over the surface from gaps along the shore line.  On Friday night the temperature dropped into the single digits (the average low for today is 22 degrees) and the ice was already cracking loudly enough to wake me up in the night.  The dam is drawing water out rapidly from the lake, so the level is dropping which likely adds to the stress on the ice.

I woke up to ice also forming on the porch windows. 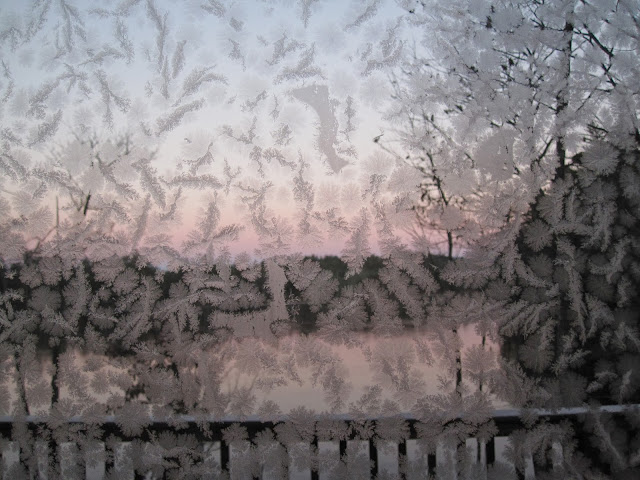 These ice formations on the glass always intrigue me, with their widely varying designs. 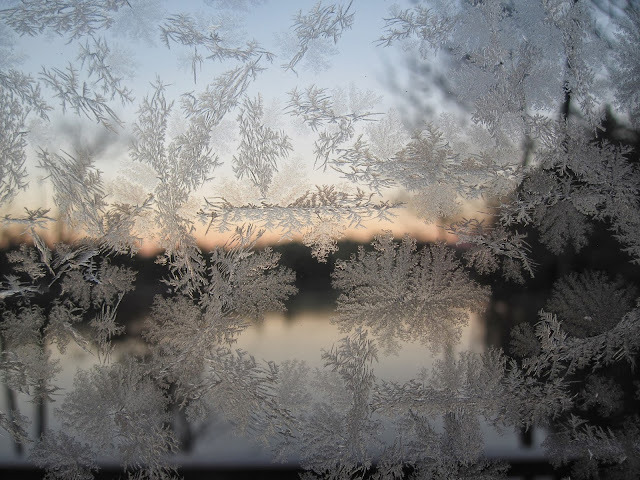 Sometimes they form sharp, dagger-like shapes, while in close proximity there can be smooth, curling shapes. 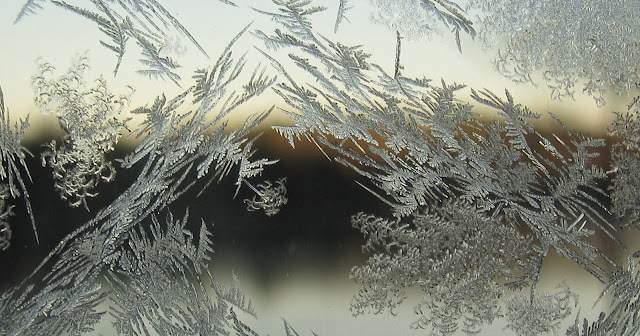 But they are always fascinating. 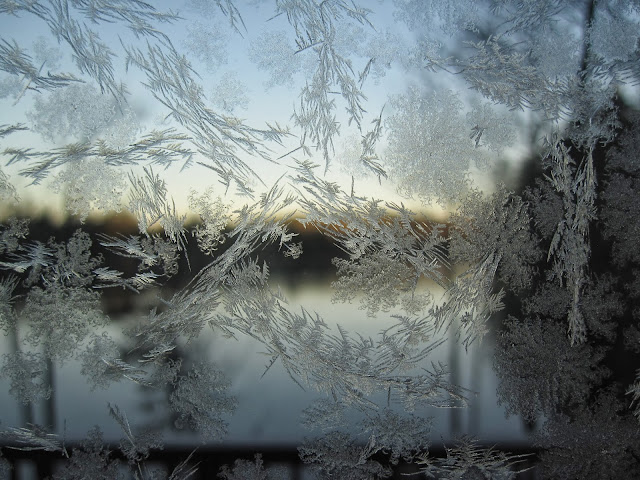 After the cold night and continued below-freezing temperatures during the day, the ice had increased to two inches thick by Saturday noon - I stepped out far enough to cut a hole. 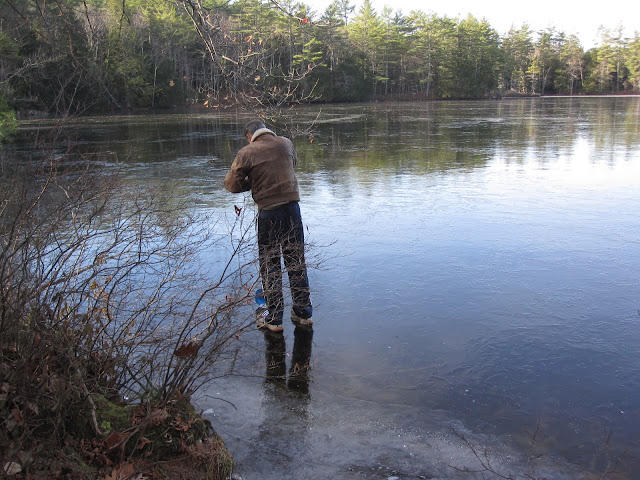 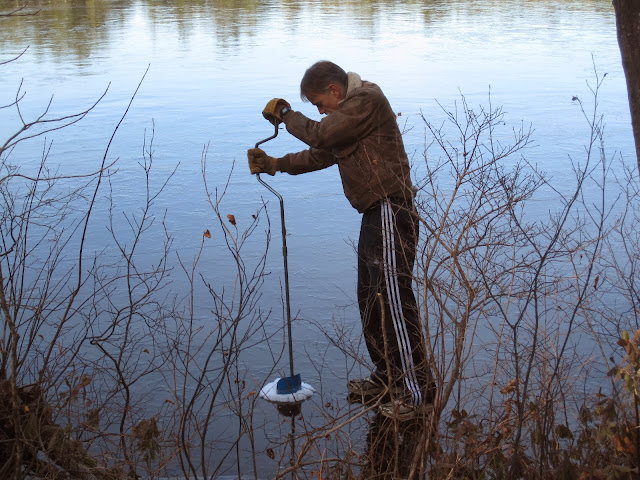 A few chips of wood had blown out onto the ice, and it appears the water they absorbed during last week's rain was being extracted by the cold, forming even more fantastic ice crystals shooting out of the porous wood. 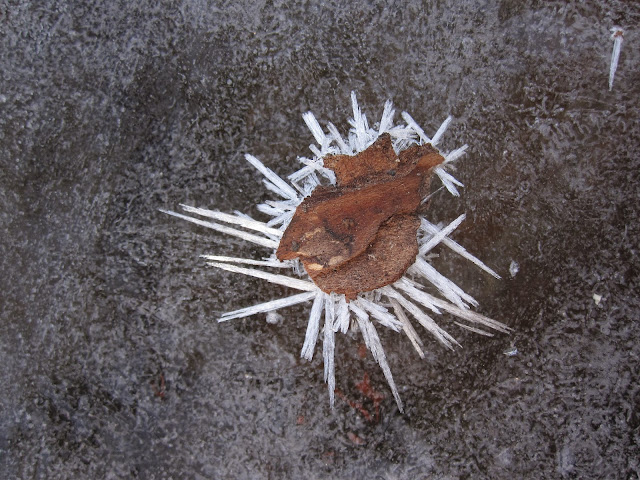 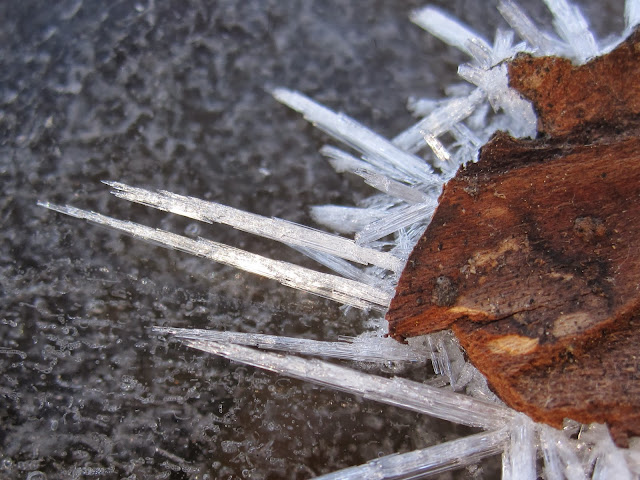 I think Lake Wicwas may be frozen over now right into spring, as it would take a pretty long stretch of warm weather to thaw out two inches of ice with no open areas to let the wind and waves participate.  Only time will tell.  But with a little luck from the weather, maybe we'll get some skating over the next few weeks. 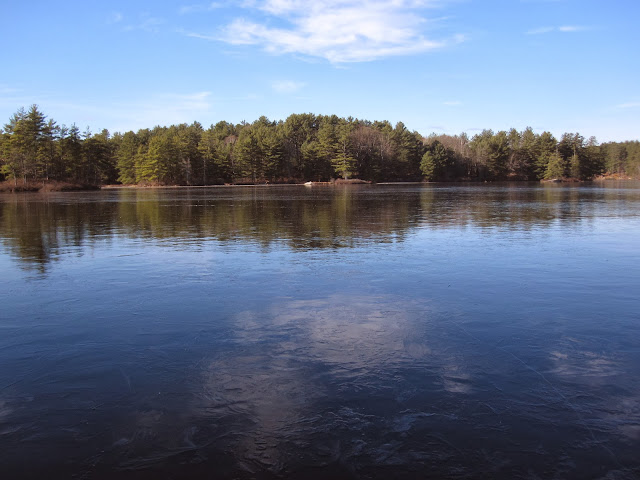 Posted by Scott Powell at 4:49 PM No comments:

Email ThisBlogThis!Share to TwitterShare to FacebookShare to Pinterest
Labels: Ice Crystals, Ice In

One week after the peaceful tranquility of my kayak trip last Saturday, Lake Wicwas gave me the polar opposite today - and "polar" is appropriate, since that's where the weather came from!  Saturday was merely cold, starting off with a nice sunrise in the morning. 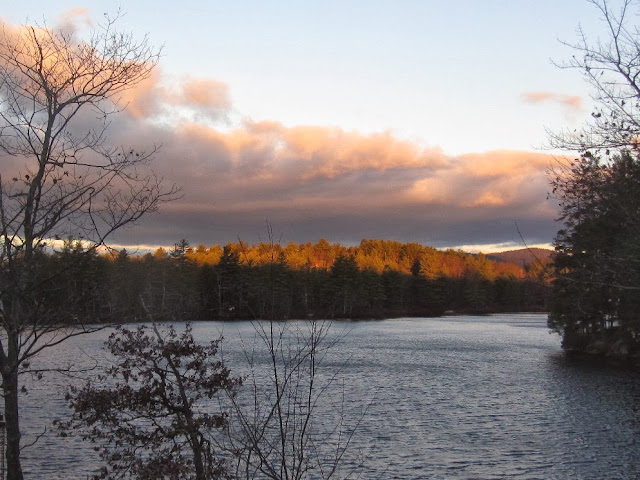 But the cold hit hard on Sunday.  A bit of snow came over night with the front, making it look a bit wintry around the lake. 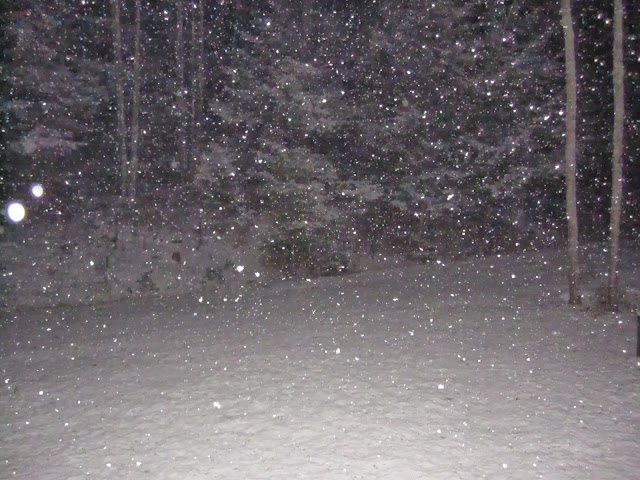 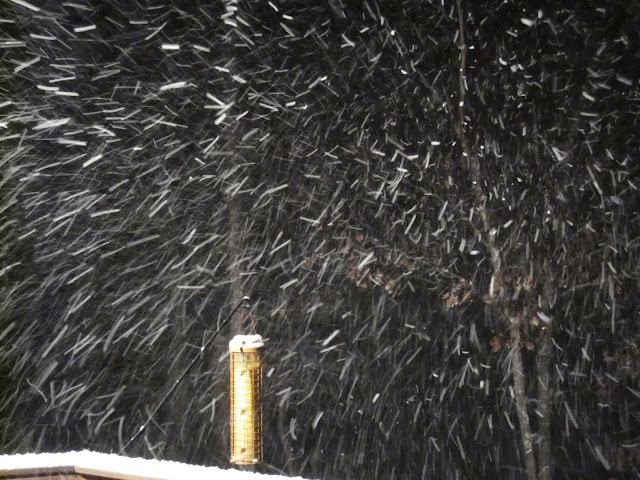 It's a good thing Wicwas is too small to stimulate lake effect snow (upstate New York got two feet of lake effect snow), as Sunday was brutal: 35 mile per hour winds, temperatures in the teens, and wind chills in the low single digits.  It wouldn't actually seem all that bad in January, but this is November!

The winds were blowing up white caps out on the lake.

Along the shore line, with the ground frozen, the waves and wind blew the lake up onto rocks, trees, and branches along the shore, glazing them with a layer of ice. 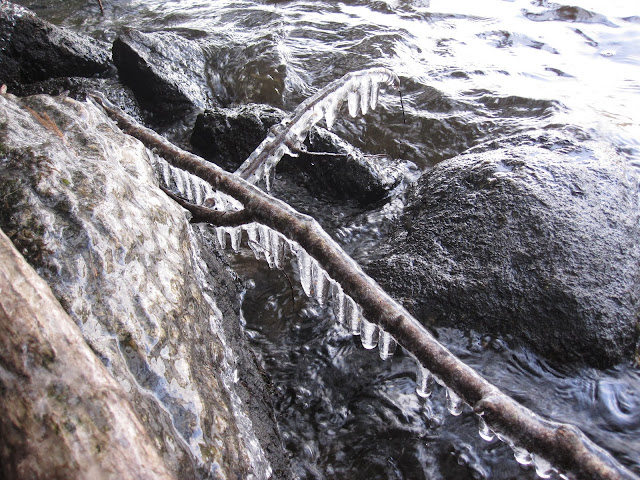 There was a hemlock tree with low-hanging branches that dipped into the lake when the wind bent it over;  each time the branch came up it had another layer of ice added to it.  It looked like it had dipped candles hanging from the branches - it was the same process, where the container of liquid is above the freezing point, while the air is below it.

The wind was blowing straight at the dam, where the ice was piling up. 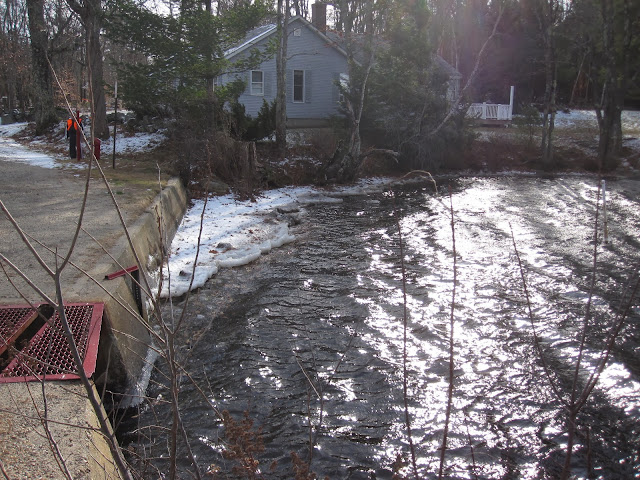 Not much of surprise that I didn't see any wildlife this week, though they are out and about, as I found deer and fox tracks in the fresh snow.  They have to eat no matter how cold it is.

It has been a meager fall for seeing migratory birds - I have seen none of the interesting birds that usually visit Lake Wicwas in the fall:  no Mergansers, Ring Neck Ducks, or Buffleheads.  It's likely they were here, just that I missed seeing them.  I saw only black ducks and a few wood ducks.  And with the long range weather forecast, the lake may be freezing over sooner than usual.

I saw one more sign of winter, and a sure signal that ski season is here:  Looking to the north from the hills behind the lake, the white arc formed by the Oblivion and True Grit ski trails on Mt Tecumseh (Waterville Valley Ski Area) is clearly visible.

Posted by Scott Powell at 5:14 PM No comments:

I was hoping to get one more voyage out on Lake Wicwas before it got too cold, and Saturday provided what might my final excursion.  It was one of those rare November days where everything lined up - it was warm, sunny, and dead calm.  There wasn't another soul out on the lake, and with nothing to disturb the surface the entire lake was a giant mirror.

I don't think I've ever seen it quite that calm.  I never realized how one tiny kayak can perturb the surface of a lake;  just getting into the boat sent ripples that could be seen far across the cove.  Pictures needed to be taken ahead of the boat - and quickly - to avoid rippling the surface.

The lake level is quite low, about 7 inches down, and the difference between the high water and the low water mark is conspicuous. It is also rather odoriferous as you approach the shoreline in many areas, with muddy, swampy areas now exposed to the air. 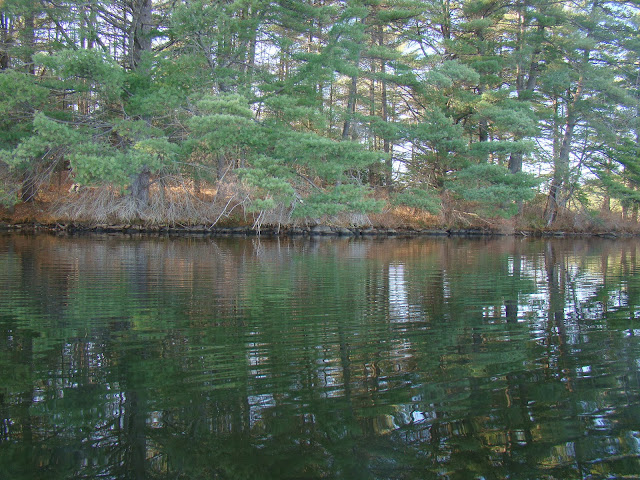 It was a rather lonely trip, as I didn't encounter much wildlife along the way.  No ducks, heron, eagles, or hawks.  I did hear a couple of geese, and saw a flock of ducks flying overhead.  The osprey are long gone, and there was no sign of the loons either, so they may have headed off to their winter homes as well.

Fortunately, I did have one welcome visitor who accompanied me on the trip, starting just north of Bryant Island: 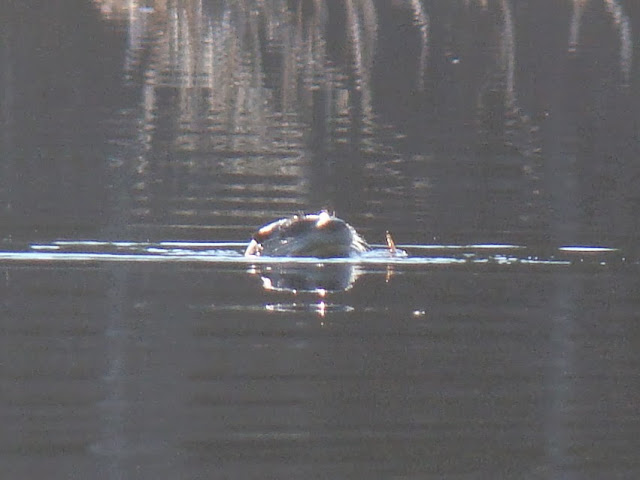 An otter!  It was floating perfectly still watching me, and as I came closer it dove and surfaced again another 30 yards off my bow.  It continued doing this, leading my trip around the island until we came to the marsh south of Bryant where it disappeared.  Every time it came up it stared right at me;  it clearly knew I was something to keep an eye on.

It was fun to watch, and to listen - I heard my first otter sounds!  Several times when it came up it kind of snorted, perhaps telling me to go away so it could have the lake back all to itself. 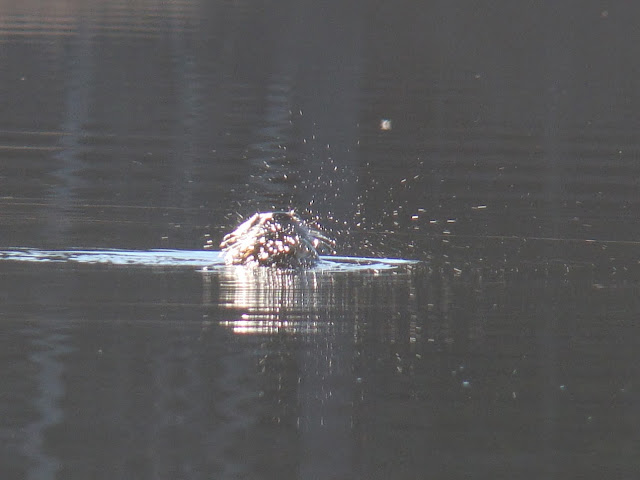 Even though I was out in the late afternoon when the air temperature was 50 degrees, I found ice in some sheltered coves,still hanging on from the night before;  so the water temperature is getting down close to freezing.  Certainly the calm, clear night helped the freeze.

With the colder weather we were brave enough to put out the bird feeder.  The very next morning we had a full complement of feathered visitors:  chick-a-dees, nuthatches, woodpeckers, finches.  It doesn't take them long to find a new food supply.  And it brought another clear sign of winter:  goldfinches that are no longer gold!

I very much enjoyed what might have been my last excursion on a liquid Lake Wicwas until 2014;  my next journey might be ambulatory! 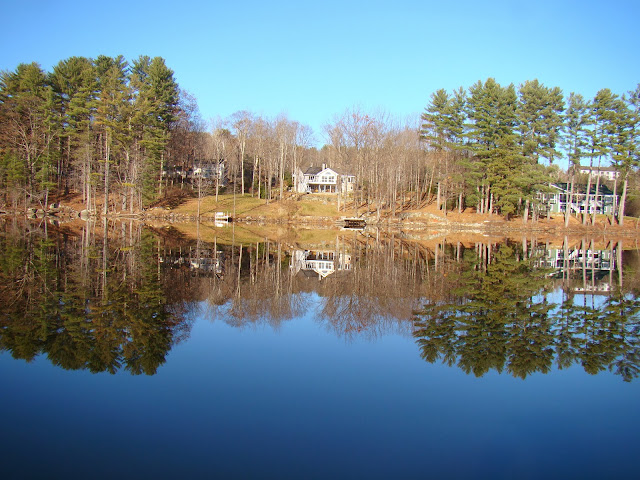 Posted by Scott Powell at 4:36 PM No comments:

A thin veneer of winter graced Lake Wicwas this morning. 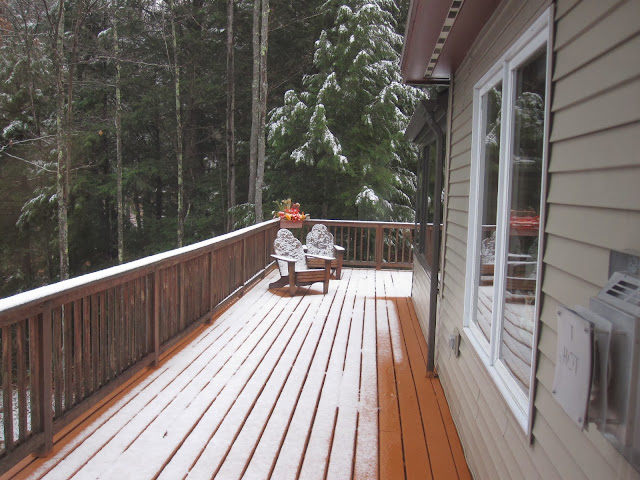 It was the first real sighting of white so far.  And amidst the gloom, a moment of brightness appeared and brightened the lake, for just a fleeting moment. 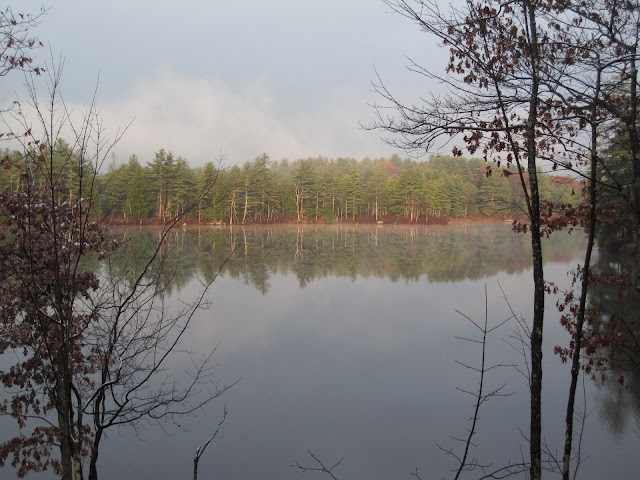 Other than that, it's been a November day.

I also saw the first bit of ice on the lake on Saturday. 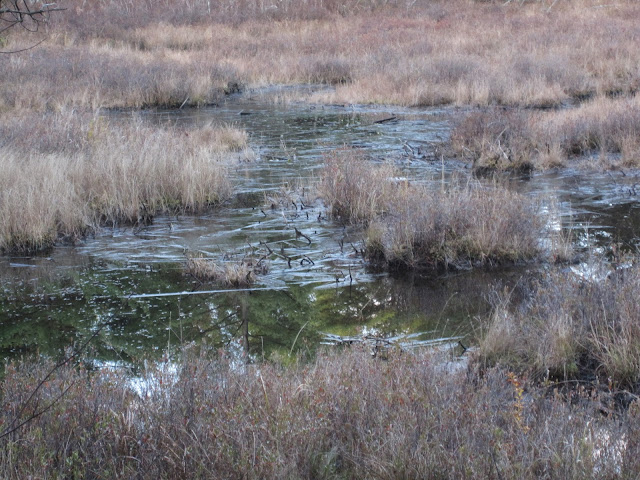 There was only a skim in the marsh which must have been accelerated by radiational cooling, as even tiny puddles caught in the leaves under the tree cover were still liquid.

I took a trip up the beaver pond on the Blue Trail to see if the beaver had come back to collect its wood that got hung up in a tree (see October 27).  It had - the tree was gone.  However, it still hadn't learned its trigonometry, as it had left another one caught in a tree! 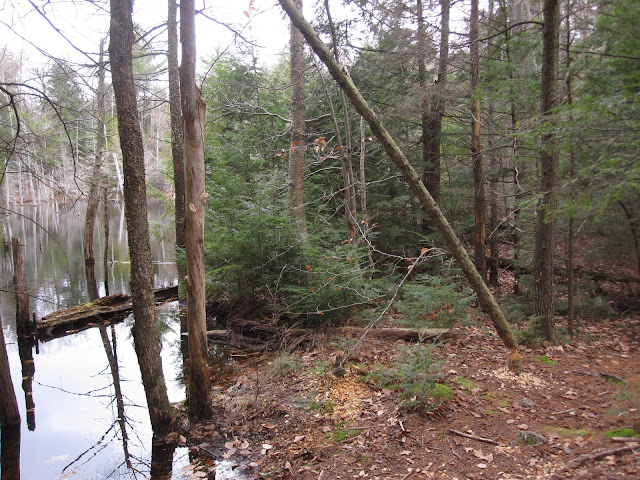 Here is where all that wood goes:
This dam may be 30 or 40 yards long, and being up to four feet high, there are a lot of branches and trunks in there. 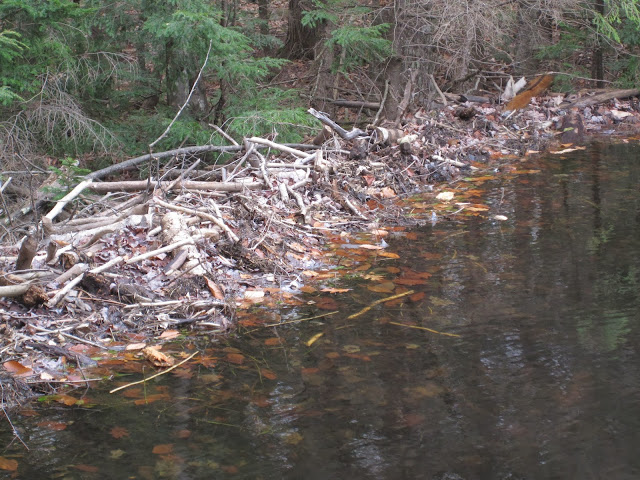 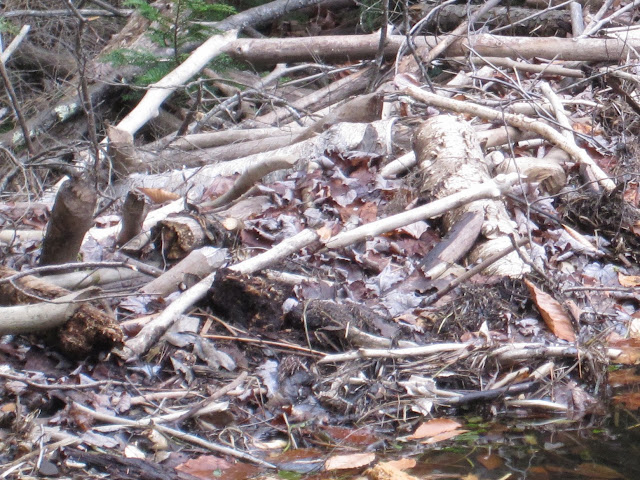 This is the back side of the dam in one spot where it is visible. 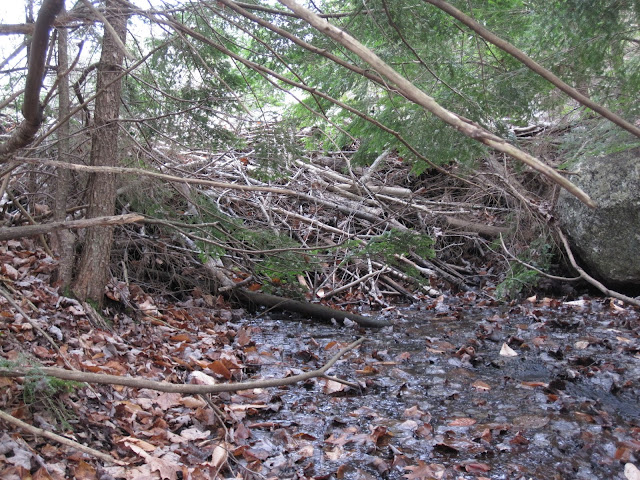 In addition to seeing the signs of deer marking their territory, there are a lot of other animals doing the same thing right now.  The fox leave their signs prominently on rocks, logs, and other exposed areas. 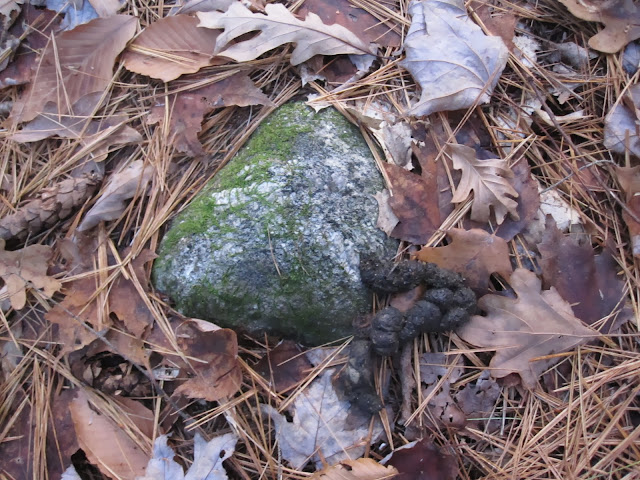 The muskrat do the same on rocks at the water edge.

They are all notices to others that this piece of hunting ground is claimed!

This is a time of year when Lake Wicwas can be quite beautiful, 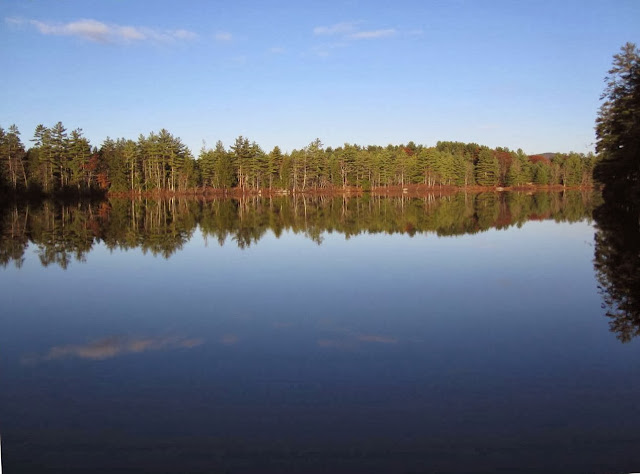 Posted by Scott Powell at 11:39 AM No comments: