More warm, damp weather was the theme of this holiday week, much to the disappointment of ski areas, their customers, and kids everywhere.  The cold water held onto the fog long into the days, sometimes never clearing all day.


But Christmas morning greeted us with a little ice, a few remaining wisps of fog, and some sun to enjoy the day. 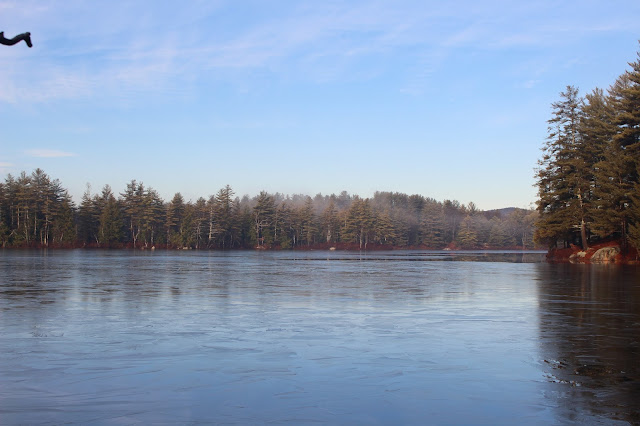 The calm Christmas eve had embellished the lake with yet another crystalline quilt. 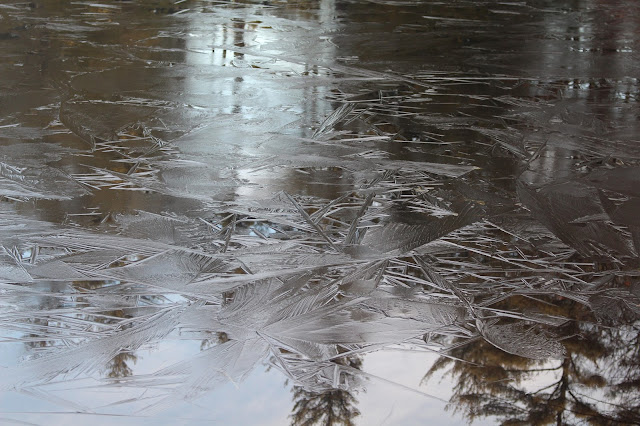 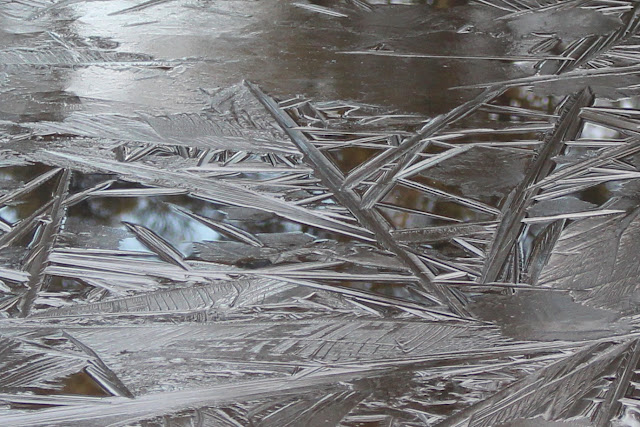 But by the afternoon the sun had melted most of the blanket, so instead of skating this year, a different lake activity was taking place.
The following morning, right at sunrise, a beautiful full moon set over yet another attempt at ice on the lake. 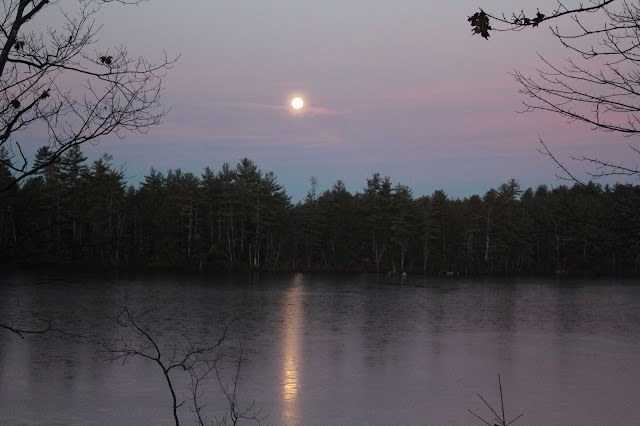 But it too, didn't last the day. 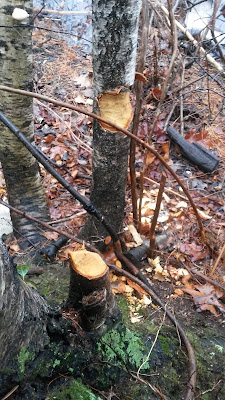 The beaver have been taking advantage of the open water to add a few more morsels to their winter food stocks down at the bottom of the lake.  They have been active near the boat landing, leaving blatant evidence of their presence. 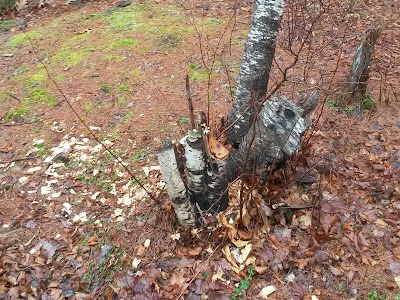 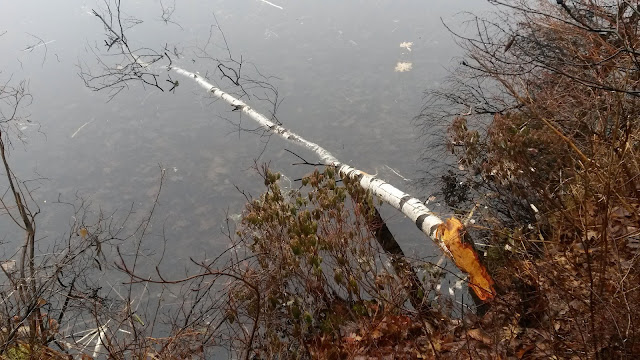 They will have brought many parts of these birches back to their lodge for winter dining, but clearly enjoyed snacking on the small branches while they worked.

It is time for them to say good night to 2015 - maybe we'll have some winter sightings before the new year arrives.


Posted by Scott Powell at 8:33 PM No comments:

It's nearly here, and there's little hope for a white Christmas this year.  The best we have mustered all season were a few snow squalls just yesterday, which at least gave a tiny taste of what it should be like In New Hampshire in late December.

The weather has portrayed the lake in a wide variety of settings over the past few days, from the heavy fog of last week, to blustery squalls, to gorgeous calm and warmth.


The bird feeders are still hidden in the house waiting for winter to tell the bears it's time to sleep.  It's always interesting how mother nature takes care of her own.  There may be little human-supplied food for the birds, but with no snow there is plenty of natural food for our feathered friends to find.  I watched a flock of chick-a-dees one morning - that would typically be visiting our feeder - uncovering plenty of small seeds among the exposed forest litter. 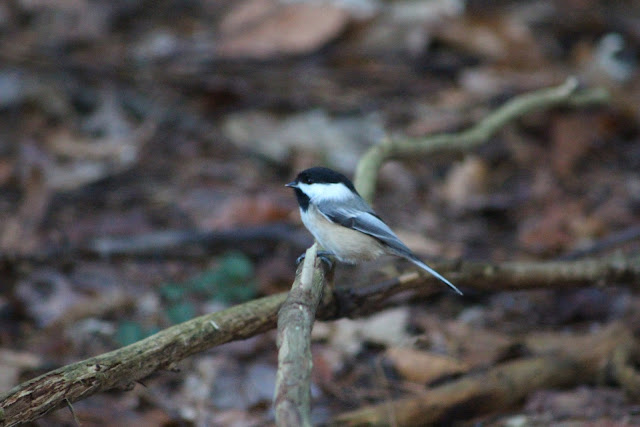 And more proof that the deer survived hunting season:  hoof prints on a neighbors beach. 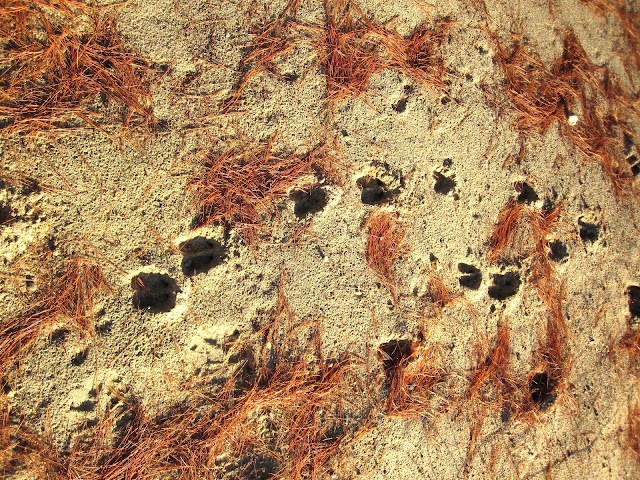 All it takes is one cold night after a good rain to give birth to these beautiful little ice formations which emanate from the warm, saturated soil. 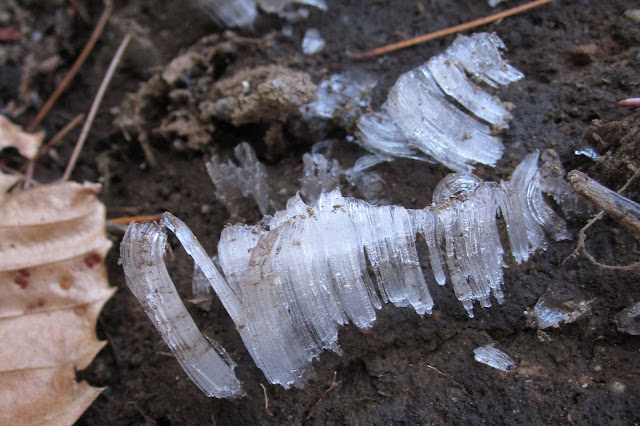 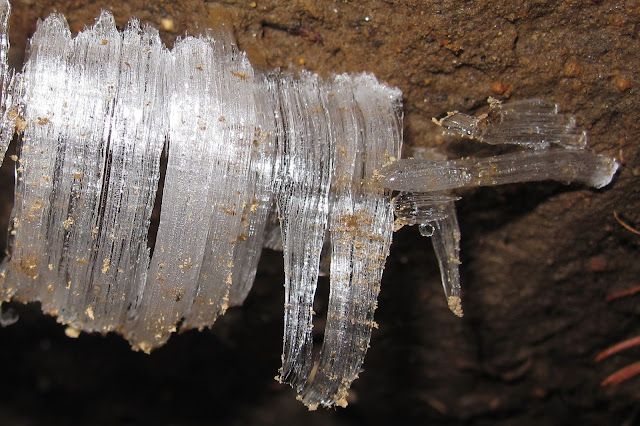 These curved crystals are about a half an inch long and grow right of pores in the soil, extracting ever more moisture from the ground, pushing the ice crystal farther and farther out. 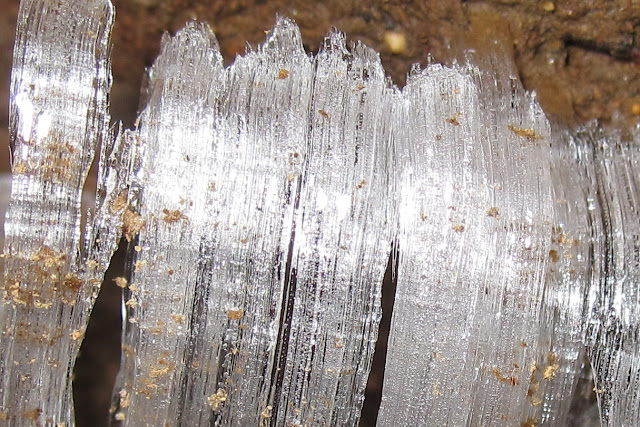 The sun is now just about the lowest it ever gets in the sky;  the winter solstice occurs on Tuesday.  By Christmas the days will already be getting longer - next time I see you, we'll be on the other side!

Posted by Scott Powell at 9:40 PM No comments:

It was rather gloomy around the lakes region this week with lots of humidity and plenty of continued warmth to go with it.  Fog was the notable climate condition, with this a common sight:


It has been, as the saying goes, good weather for ducks;  a few Mergansers appeared on the lake to prove the point.  It looks like a group of two males and one female. 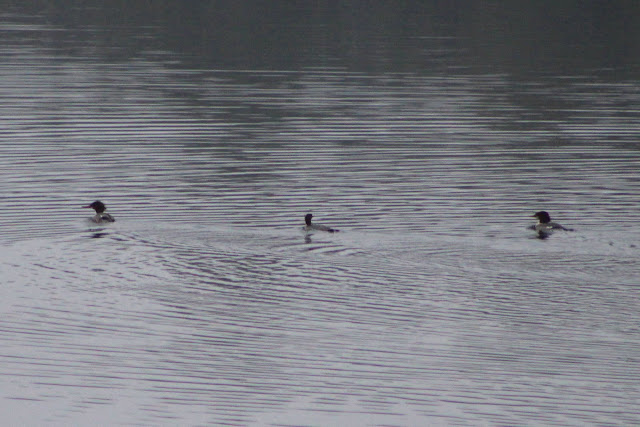 One of the males appeared to be showing off. 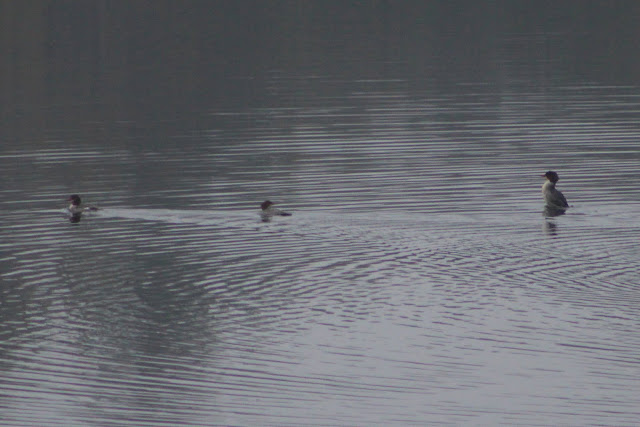 Which seems to have worked, as the female selected him to sail off with into the mist. 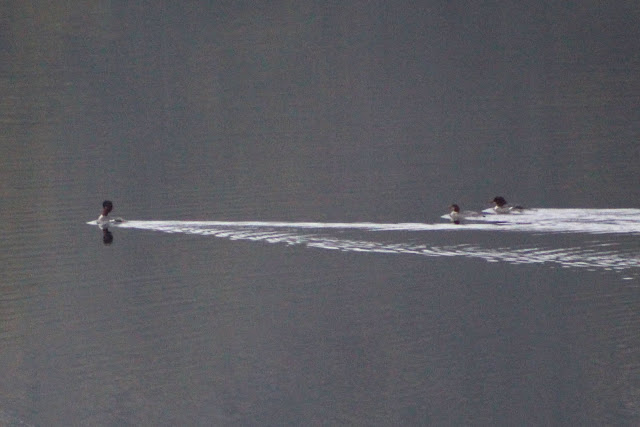 Later in the week, when the sun did come out for moment, a lone female Hooded Merganser stopped by the lake to do some fishing on her way to her winter home. 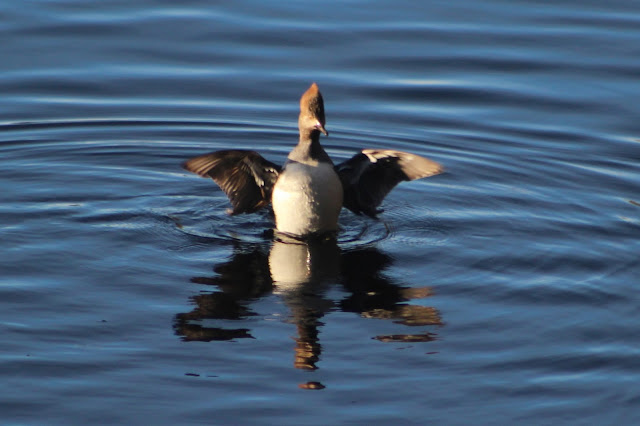 Both the male and female of this species are quite striking and always a treat to see.  The inland hunting season for ducks ends today;  I hope she made it - I heard gun shots this morning! 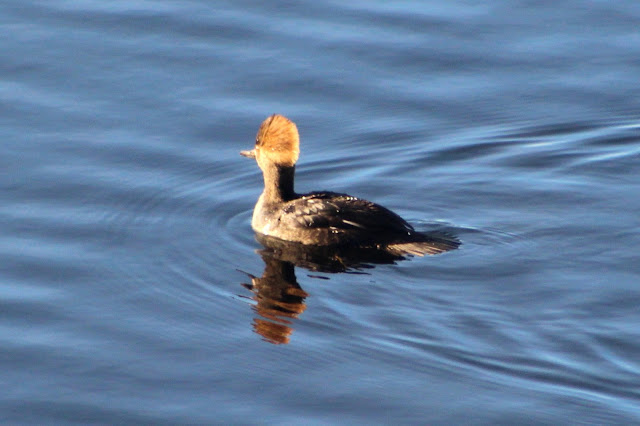 Although I didn't see much other wildlife - no owls this week - I did come across lots of their signs, showing I was on the right path.  Here are some of the signs the animals scattered around Lake Wicwas this week.


Next, scat from one of the coyote's winter prey, a white tail deer, and again two versions indicating the varied diet as the season changes from lush summer foliage to dry, winter forage.

More scat - this is from a bird - probably last week's Barred Owl, as it was not sprayed out over a long area as a hawk would do, but rather dropped straight down by an owl. 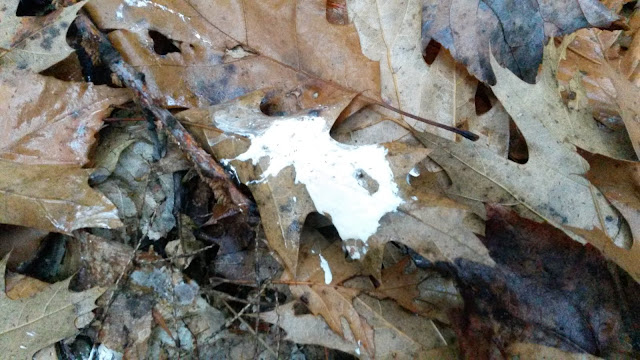 And finally, some small trees with their bark recently chewed by a porcupine fattening up in case winter ever arrives. 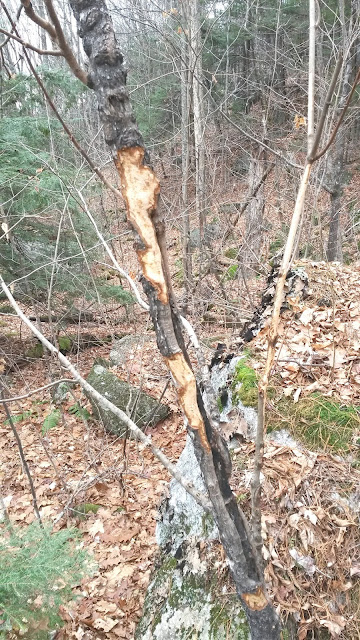 You can find this if you walk on the lower-ledges section of the Red Trail in the Hamlin-Eames-Smyth conservation area.  But be warned, the heavy rains and wind have taken down some trees and re-routed some of the streams near the Maple Grove.


Soon the trail crew will have it cleaned up.  This week they were working to clear out drainages along the Beaver Loop (Blue) trails.

Dave Anderson published a nice article titled "How to See More Wildlife" on the Society for the Protection of NH Forests website;  he gave permission to link it here.  Click here to see his suggestions for the next time you head out into the woods.

Posted by Scott Powell at 6:27 PM No comments:


All of New England continues to enjoy above average temperatures (it hit 50F in Meredith today) but that doesn't mean we haven't had a cold night here and there.  On one chilly morning Jack Frost visited the house, this time blazing his creative flourish on the front windows of the sun room. 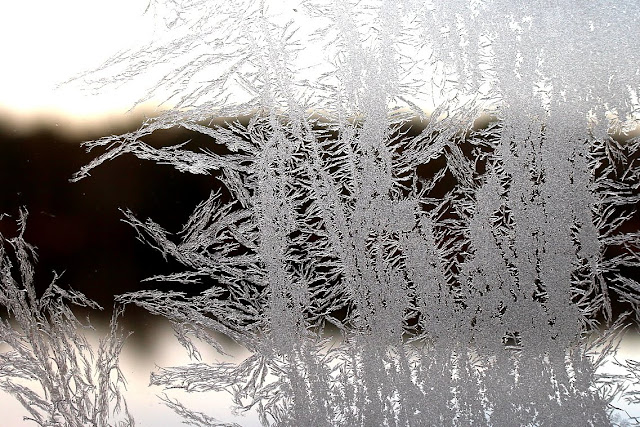 There is a narrow set of conditions that permits the formation of these ornate creations.  These crystals formed only on the lake-side windows on the outside of the glass;  the other two sides of the same un-heated room did not have a touch of frost on them.  The humidity must be high enough, and the temperature cold enough for water vapor in the air to freeze directly on the glass, without condensing into water first.  In this case the moisture drifted up from the still-unfrozen lake and was deposited on the cold glass facing the shore. 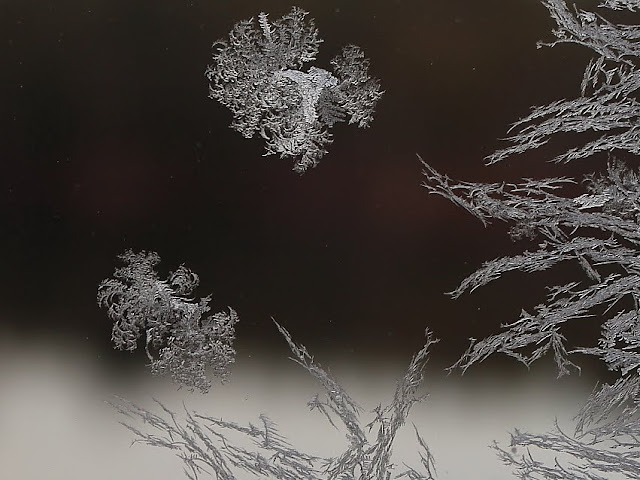 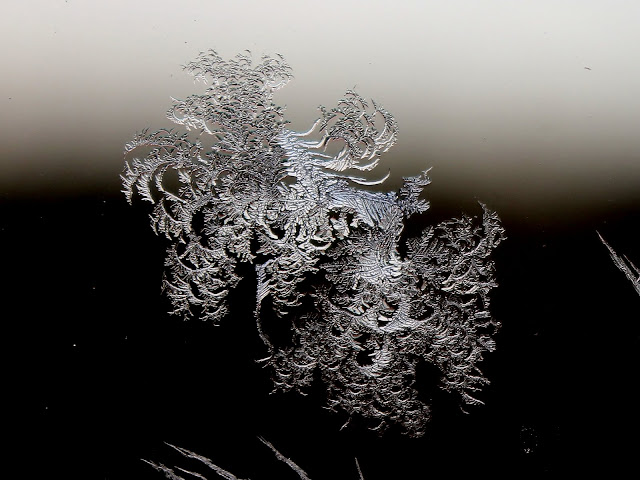 The particulars of the patterns are not completely understood, but they are guided by imperfections and impurities on the glass:  bits of dirt, finger prints, cleaning residue, scratches in the glass - they all provide discontinuities for crystal nucleation and then subsequent growth. 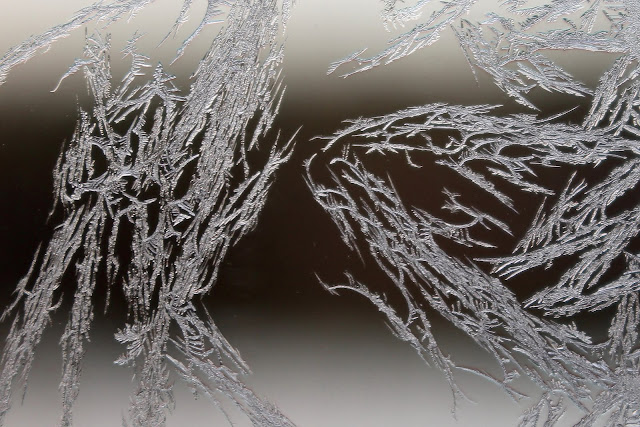 I saw a lot more wildlife activity around the lake this week;  perhaps the animals are out enjoying the nice December weather as well.  One morning I saw a mink hopping along the shore line looking for lunch, and later in the day there was an otter out playing in the lake.  On two separate days I saw huge eagles flying overhead - not Bald Eagles, but probably Goldens on their way to the central Appalachian mountains for the winter.  Golden eagles have not bred in New Hampshire for many years, but do pass through on their way to and from their breeding grounds in Labrador and Quebec.  You can read more about Golden Eagles in New Hampshire in this post by the Society for the Protection of New Hampshire Forests.

All of these sightings were too fleeting to catch a picture, but I did get a good look at another fabulous bird just yesterday.  I was returning from doing some trail maintenance when a beautiful Barred Owl flew right over me and perched on a branch some 30 yards into the woods. Because I was working I only had a small camera in my pocket, but was able to get a clear enough shot to be able to identify it.

I stood and watched for a long time, as it swiveled its head back and forth, either looking for food or just trying to determine if I was a threat. 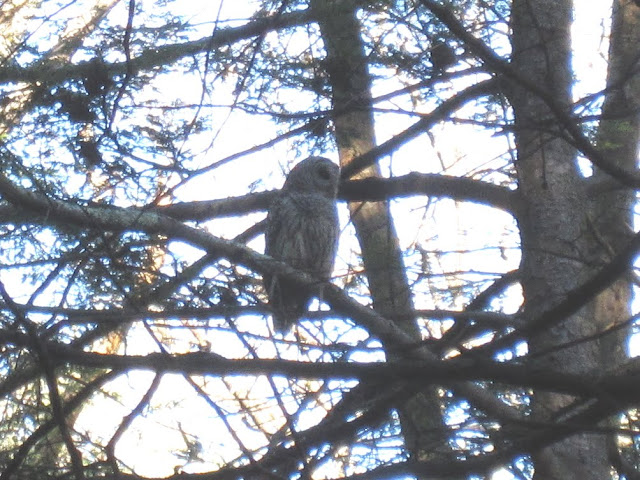 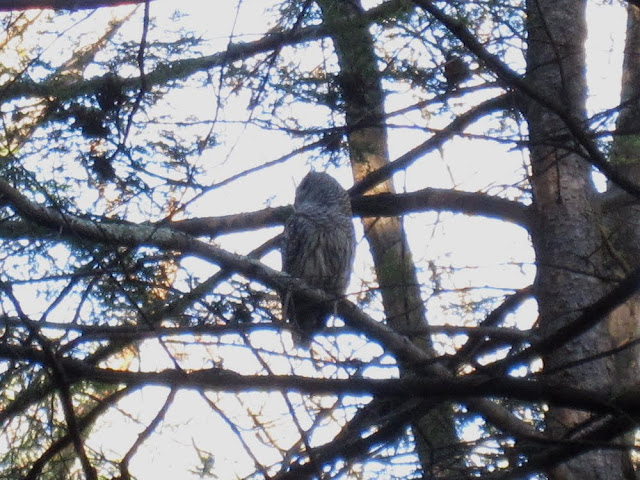 This bird is almost 2 feet tall and has a wing span over three and half feet.  It's amazing to see such a large bird fly in complete silence.  The only time it make a sound was when a wing tip brushed against a branch as it navigated deftly through the trees - remarkable for such a large bird in a dense forest.

The barred owl is a friend to farmers, as its diet is predominantly small and medium sized rodents:  mice, moles, chipmunks and squirrels, as well as larger mammals including rabbits, weasels, and even mink.  It will take a bird as well if it has the chance.  Think how many rodents this skilled hunter needs to catch in week to maintain its weight. 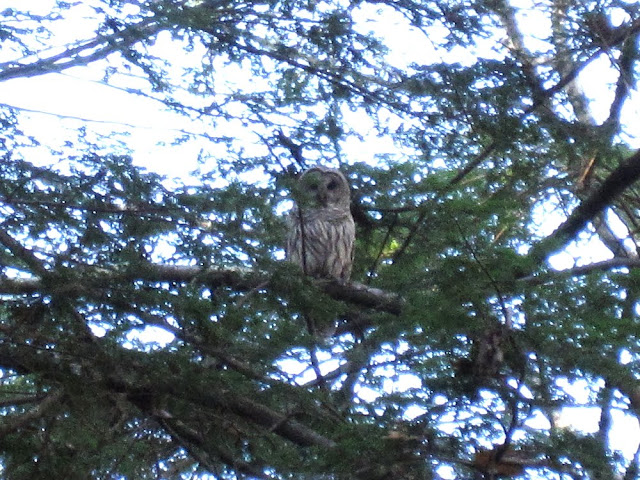 I'm a little torn between enjoying the nice weather, and wanting to get out on the skis, snowshoes, and ice skates.  But I know winter will get here eventually, so I've decided I'll be happy to take the warm weather as long as mother nature and el nino will send it our way.

Posted by Scott Powell at 10:31 PM No comments: