Merry Christmas from Lake Wicwas!  It certainly has looked like Christmas Town around the lakes this week.

That's a picture from the Hamlin Conservation Area taken on the Blue trail around the beaver ponds three days before Christmas.  It was still snowing lightly, so there were no animal tracks to be seen but it was a beautiful, peaceful time to be out.

On a later trip along Lake Wicwas I did see tracks, and saw that with the ice growing thicker, the fox have started taking shortcuts across the lake to get from one hunting ground to another. 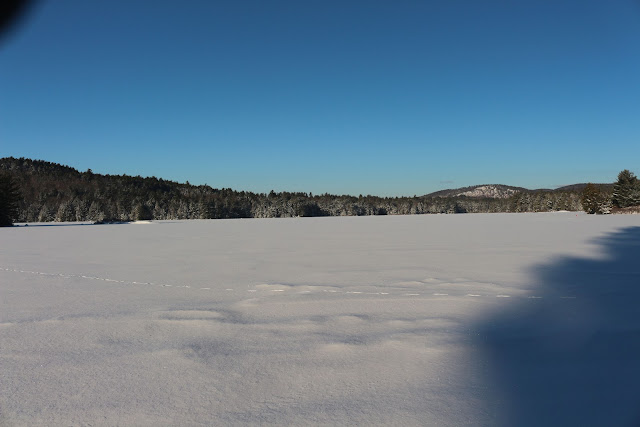 With only a little snow on the lake it must make for fast and efficient travel.  They were rather busy, hunting around the shore, the islands, even the beaver lodges, in search of food. 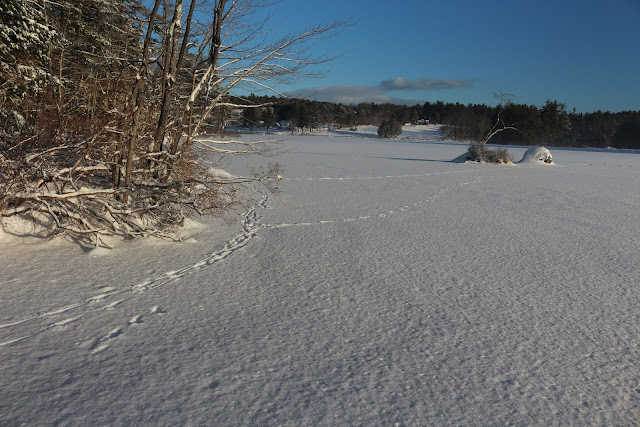 I say "they" because there were two of them.  It often looks like one set of tracks, but one fox will follow exactly in its mate's tracks for long distances.  Since fox "double register" it means there are four footsteps in each print.

Here's one of their favorite entrees, fattening up on Linda's bird feeders. 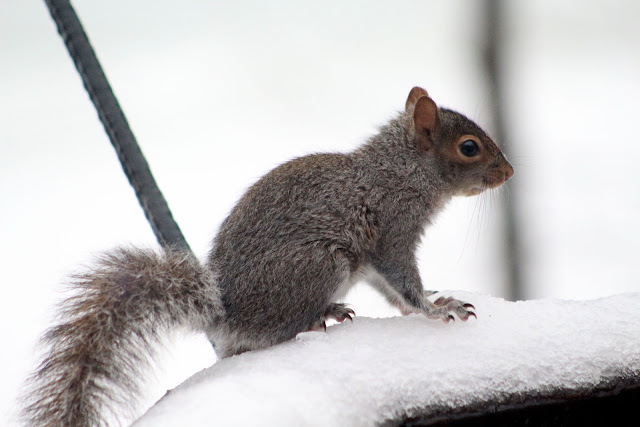 Of course, the fox have to compete with the fishers, coyotes, hawks, owls, bobcats, and a host other predators that feed on the squirrels.  Nice to know Linda is doing her part to support the entire food chain so everyone will have a nice Christmas feast.

Up on higher ground away from the lake I found a spot where a fox had made a bed in a bright sunny spot, curling up in the snow for winter's nap.

We had a just a touch of rain on Christmas eve, but with the current weather pattern I'm optimistic more of the fluffy stuff will soon fall.  If you are visiting the lake over the holidays I hope you can get out to enjoy the beauty of the season.  And remember, with the winter solstice behind us, the sun is rising higher in the sky - the days are already getting longer! 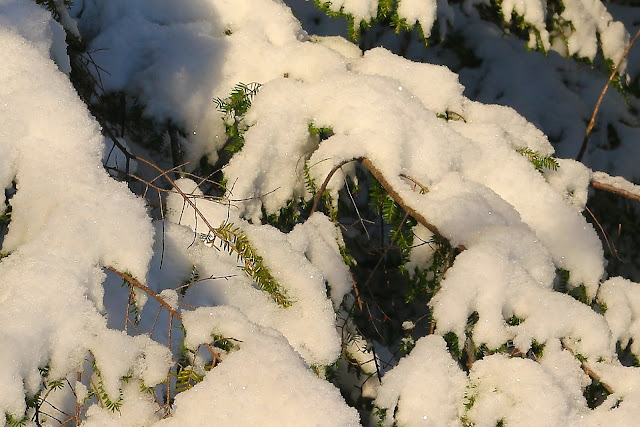 Posted by Scott Powell at 7:00 AM No comments:

If you live pretty much anywhere north of Florida you know that winter hit hard this week.  Temperatures here in the Lakes Region were below zero and we had a couple of storms come through, bestowing fabulous light powder upon us.

But then today it all was spoiled by a dose of rain and freezing rain last night. 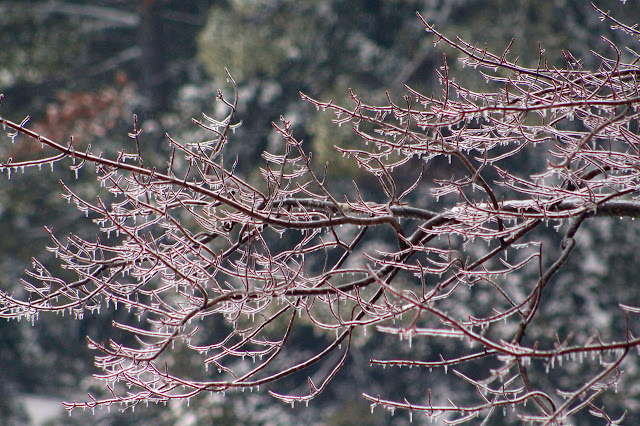 In New England, one has to take advantage of good weather when one can, so after the first snow I got right out for a quick ski on gentle terrain to enjoy the conditions.

The very next day, I saw that a gray fox had already found my tracks and took advantage of them for ease in his winter travel. 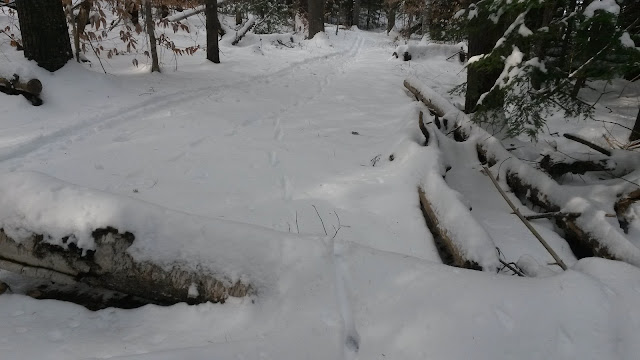 He also blazed a prominent spot to mark his territory (that's why I assume it's a male).

I only say it's the gray fox because I've seen one in that area many times.

My friend the mink from a couple of weeks ago was back out running around, but this time on top of the lake rather than in it.
Here it snuffled around a hole in the bank, following the scent of something to eat:

A short squall had left the thinnest layer of dry snow on the ice which made a great substrate for prints.

I've only ventured out a few feet on the ice in coves where it froze up quite a while ago - in those locations it is already 4" thick - but I'm giving the wider lake more time before I'll consider it safe.

Well after those protected coves froze over, a strange hole opened up and was bubbling away like a hot spring at Yellowstone. 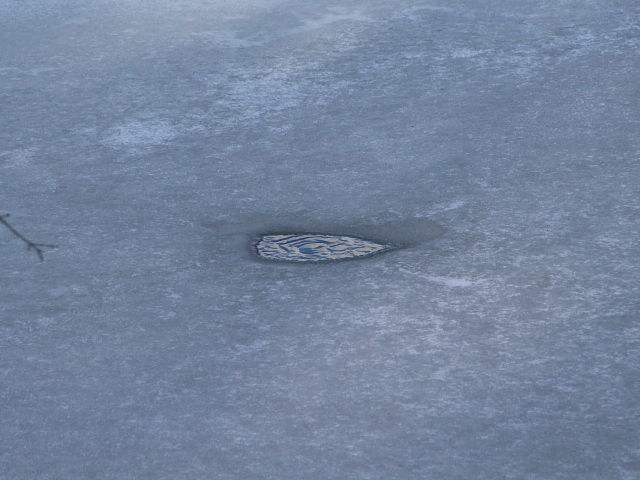 I don't know the cause of this - perhaps a warm spring in the bottom of the lake?

Lake Wicwas is frozen over but Winnipesauke has a long way to go, and the northwest wind blows the mist coming off the water down Meredith Bay on cold mornings. 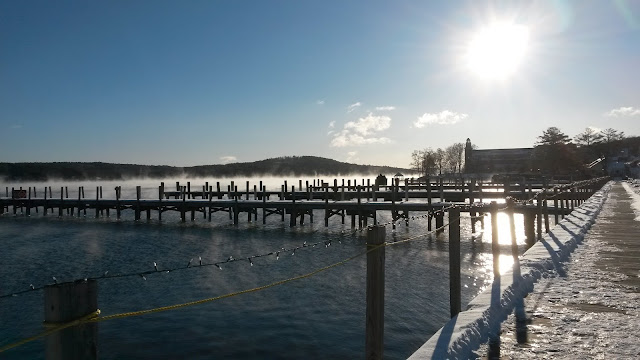 These are pretty times here, when the cold and snow arrives in New Hampshire. 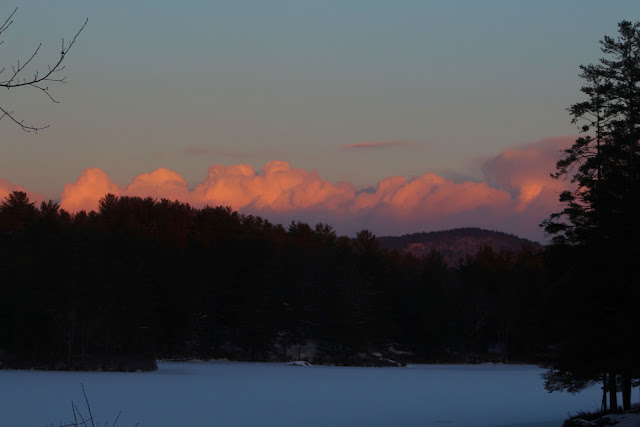 Posted by Scott Powell at 1:00 PM No comments:

Last week's bright wintergreen is now a memory, buried beneath the snow until spring - at least if the winter continues the way it is starting out.  On Monday we had a nice fluffy layer of fresh snow draped across the landscape. 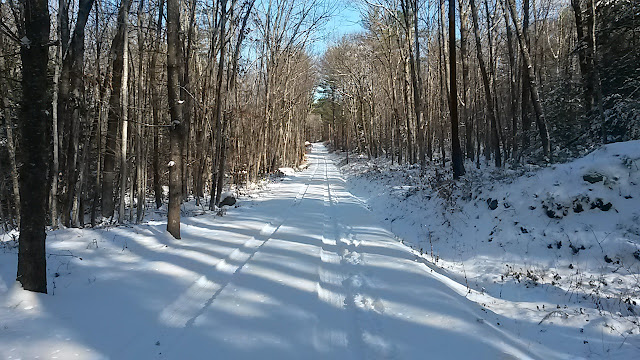 Falling into the open water it provided ready-made ice which froze up over a good portion of the lake. 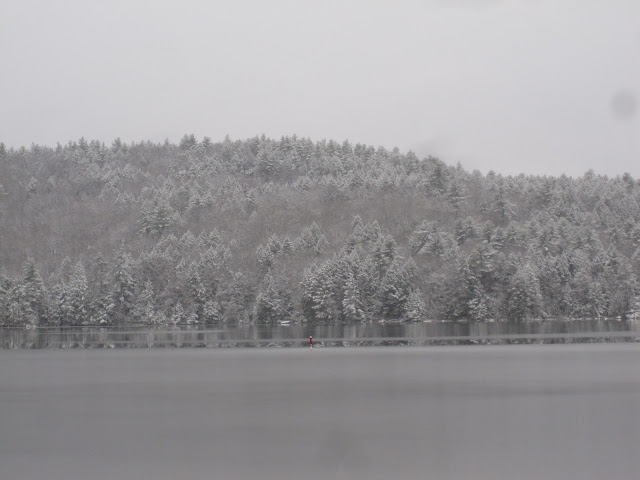 Then a strong wind a few days later blew much of it away, opening up the majority of the lake again.  Even with temperatures down into the teens, the wind kept the lake wide open as recently as Saturday.

The wind does tend to splash water up near shore, creating interesting ice sculptures.
But last night, with the wind abating and the air temperature dropping to 5 degrees, the lake did freeze over, with ice-in declared this morning, December 11.


Every year the lake freezes up in a new manner.  This year the early ice in protected coves, followed by some moderate temperatures and sunny days created perfect circles in the ice with spider-cracks where water must have trickled off the surface, finding its way back into the lake.


Returning home from a Christmas shopping trip one afternoon I ambushed a rafter of turkeys that had discovered Linda's bird feeders.  They left quickly but calmly, and I was able to catch a quick picture of the last two as they strutted off into the woods. 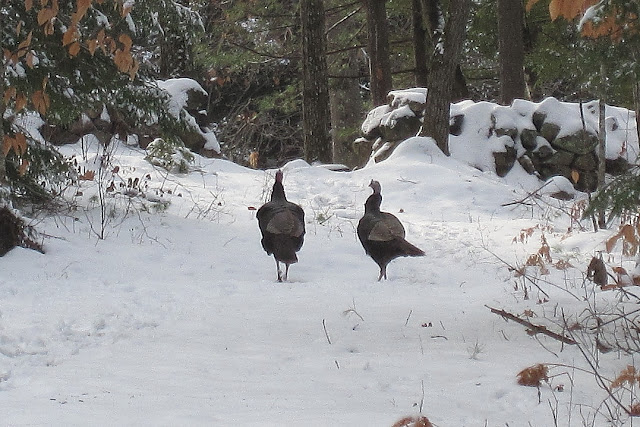 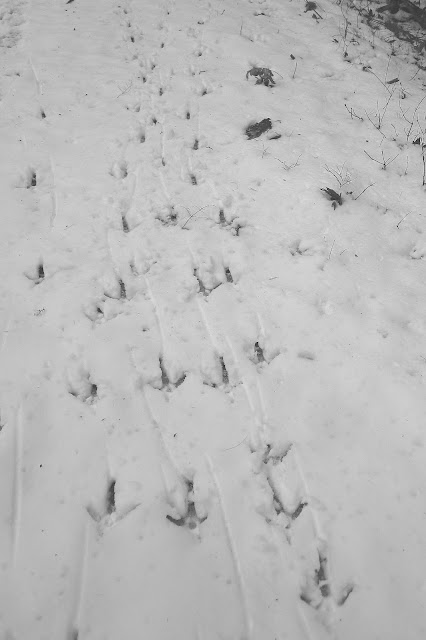 They had been around long enough to thoroughly trample the areas around the feeders, leaving plenty of evidence - they are not a stealth bird, that's for sure. 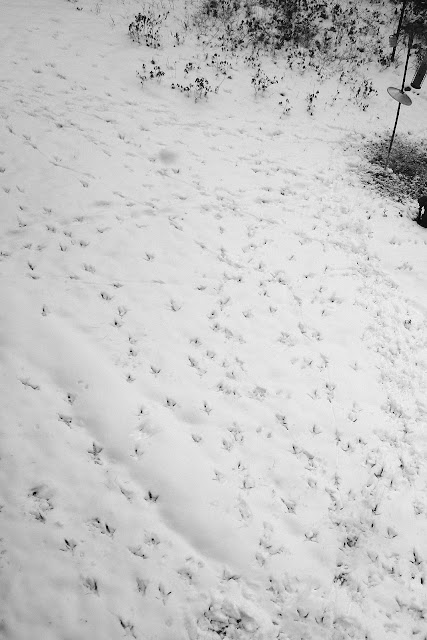 Fresh, early snow is always great for seeing what animals have been out around the lake all year, often without any prior trace.  In addition to the turkey and the usual squirrels, this past week fox, coyote, rabbit (or hare), mice, deer, and otter all left their mark around the lake.  Here a rabbit and a mouse followed the same trail. 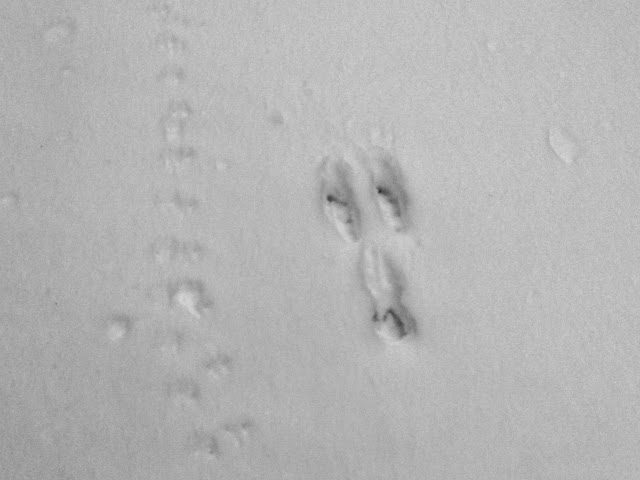 At this point an otter slid along on its belly right across the trail and down into the lake. 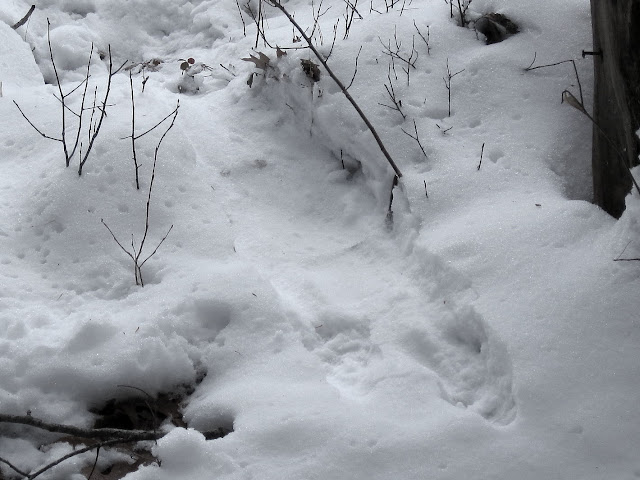 All these tracks will soon be covered up, as more snow is forecast to arrive tonight.  It means there may be no skating on Lake Wicwas this year, but I'm starting to think:  snow shoes, cross country skis, and pretty sunrises.

Posted by Scott Powell at 1:40 PM No comments:

December is here, and with it came some December-like weather:  cold and blustery with whitecaps being whisked down the lake by a strong northwest wind. 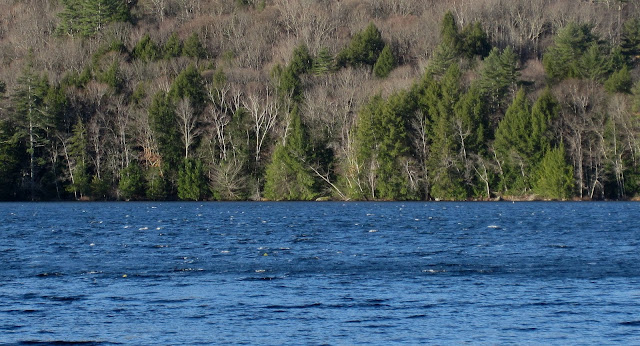 But every December is different - compare this year to what 2013 brought us:

That northwest wind blows needles the white pines dropped during the fall (even the evergreens lose a good number of their leaves in the fall) to the edge of the lake where they can get all wrapped up into a tight bundle and then washed up onto shore.  This looked like a small porcupine curled up by beside the lake.

Turning it over you can see the dense packing of the needles. 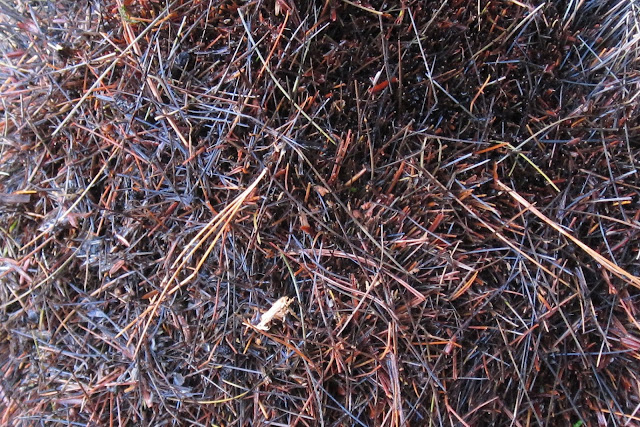 The week also brought some warm and wet weather, so the bird feeders came back in the house, but not before a visit from a pretty downy woodpecker. 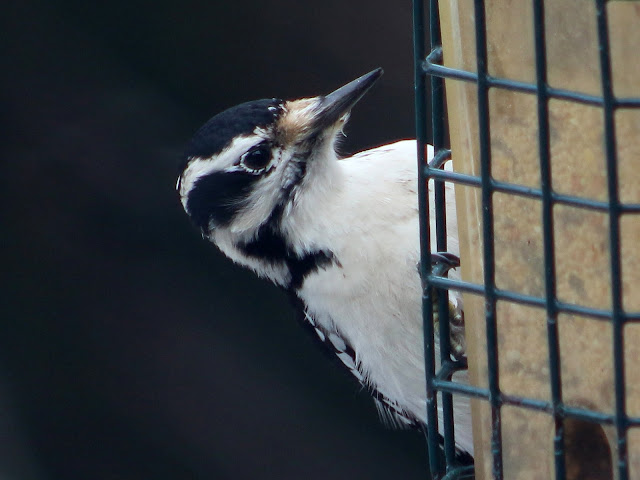 Check out those claws, evolved to hang on to bark as they search for food on trees. 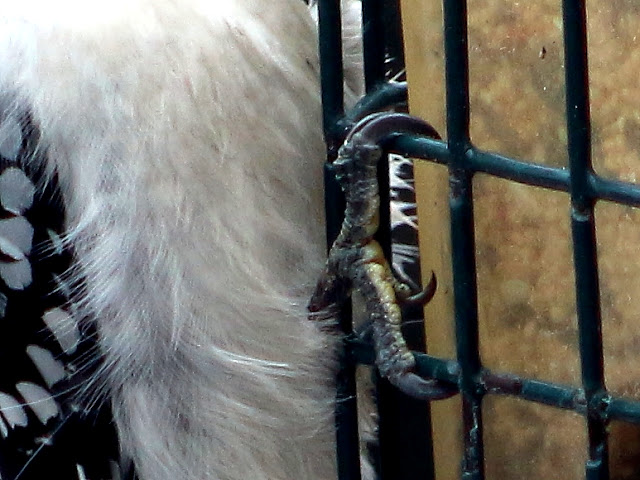 Did you ever think about the fact that birds have tongues?


Duck season runs until December 17 in our region and the sportsmen are still out on the hunt, complete with an eager and attentive hunting dog. 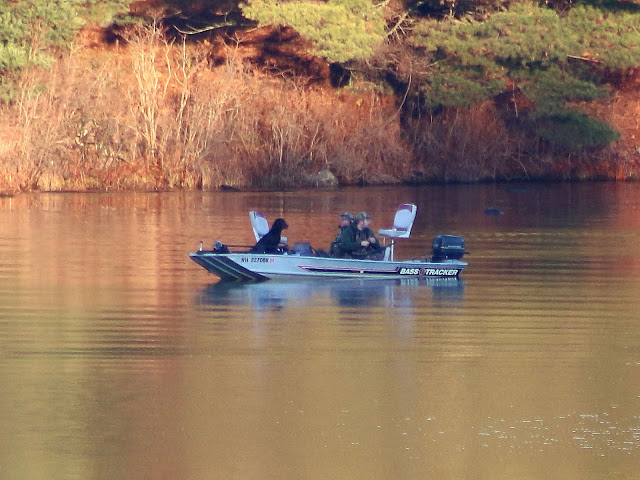 Just twenty minutes after they went by, two hooded mergansers, having eluded them, arrived in the very same spot.

There have been a few more ducks around this week, including this pair of common mergansers resting quietly on a rainy day.


A very wet squirrel was also out adding to its winter stores.

The earlier snow is gone now.  As we await the arrival of winter to be blown in with that northwest wind, we can at least soak up the last colors of fall before they are buried under a blanket of white.