Late July already - the summer is flying by as usual.  We found a quintessential New England summer scene from the waters of Lake Wicwas yesterday:  Harvesting the field. 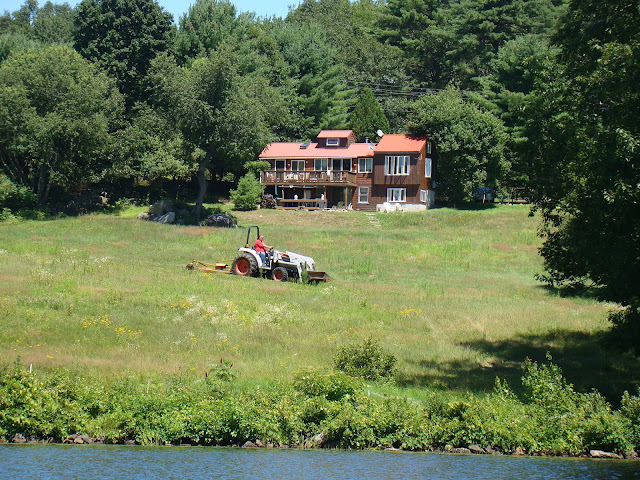 The water temperature has cooled down from last week, but it is still pretty warm.  Last week during the warm spell it reach 86 degrees near the surface.  I have not seen any cyano-bacteria blooms, but there have been reports of them.  Right now in the lake there are many small green globules floating everywhere in the lake that may be clumps of algae. 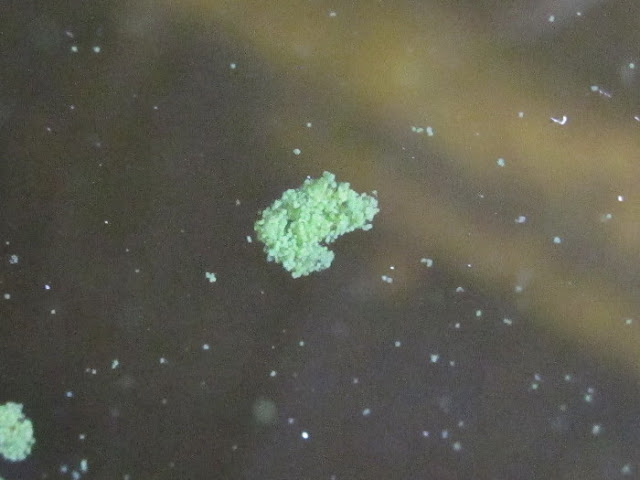 Perhaps the water quality experts can identify these for me at next week's Lake Wicwas Association annual meeting.  We'll get a full report on the lake water quality at the meeting.

I noticed another aquatic flower floating in the lake this week - a tiny yellow flower. 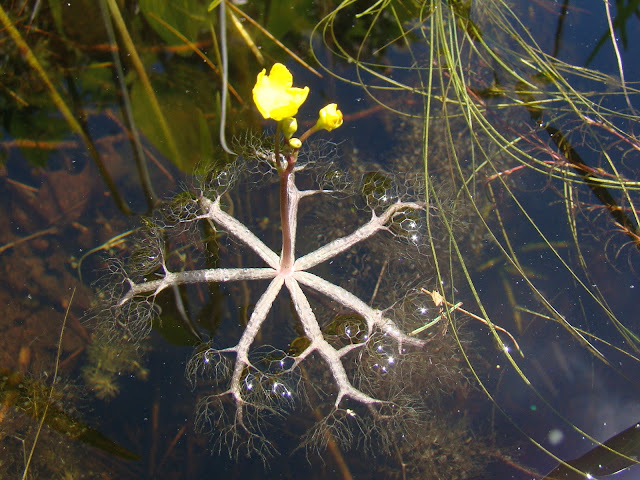 It is kept afloat by a seven-pointed star pattern of its leaves, and suspended in the water below is a soft network of roots (the weeds trailing to the lower left in the picture below). 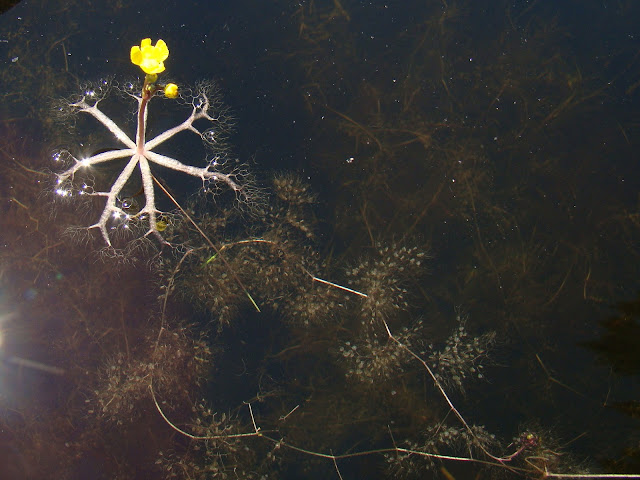 It appears that the mother plant releases these when it is ready to send off its seeds to propagate itself, as they are free floating and not attached to the lake bottom.

Back on shore, I have seen many times the cones of the Alder tree after they have matured, but for the first time I noticed green cones just emerging. 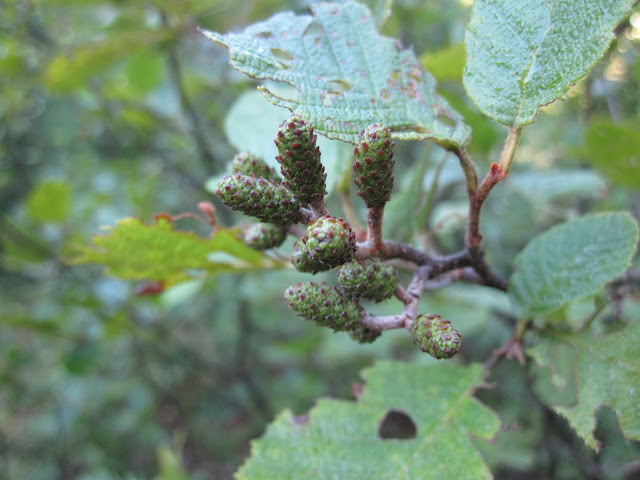 The alder is interesting in that it is a deciduous tree, yet it has cones like an evergreen.  The cones are the female flower containing the seed, and they remain on the tree long after releasing their seeds, which is why they are so noticable in the fall and winter when all the leaves are gone.  This mature cone is on the same tree, left over from 2012. 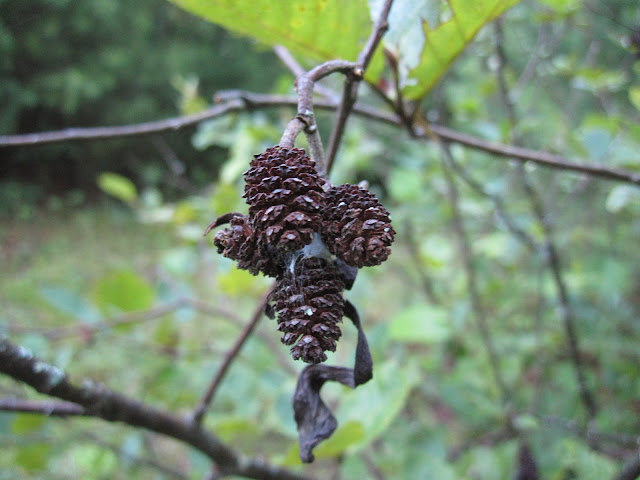 Reading about the Alder tree, I learned some interesting facts.  The Native Americans used Alder bark for medicinal purposes;  we now know the bark contains salicin, which the body turns into salicylic acid -  or asprin.  Also the wood is a favorite of electric guitars manufacturers.  According to Wikipedia,  Fender has used Alder wood for their bodies of their Stratocaster and Telecaster guitars since the 1950s!


Let's not tell them we have Adler trees in New Hampshire.   ; )    Long live beautiful summer days at Lake Wicwas! 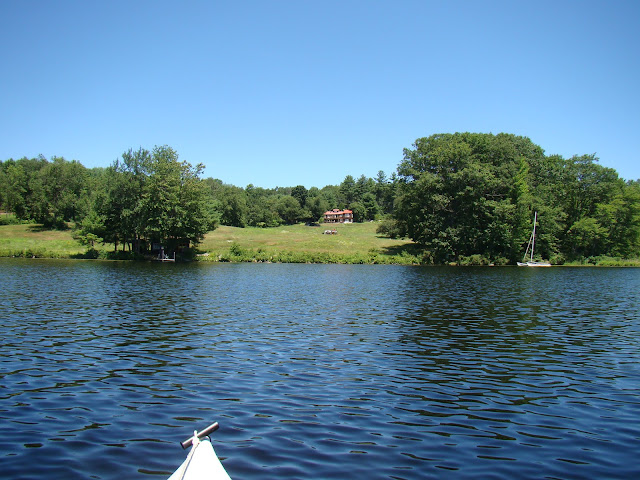 Posted by Scott Powell at 5:24 PM No comments:

The long stretch of hot and humid weather finally ended last night, much to everyone's relief.  And the strong thunderstorms that were predicted to occur when the front came through never hit Lake Wicwas - they just skirted us to the north.  Which was a good thing, because the Lake Wicwas Association was having a wonderful event at the lake just at the time the front passed!  The association was recognizing another of the many conservation events around Lake Wicwas, this time for the effort that created Hamlin Park.  Several members of the Hamlin family were present for the event.

Everyone who attended had a good time, and we all thank the gracious hosts for their generosity and hospitality!

I had some challenging bird identification this week, after seeing two different groups of birds flitting around the shore line, feasting on the berries now ripening.  My best guesses are that one is a pewee and the other is a warbler, but both could be wrong.  Any guidance from bird experts would be welcome here.

The Pewee(?) was enjoying some little red berries which I have not been able to identify either.  Not a good week for me;  I have more work to do! 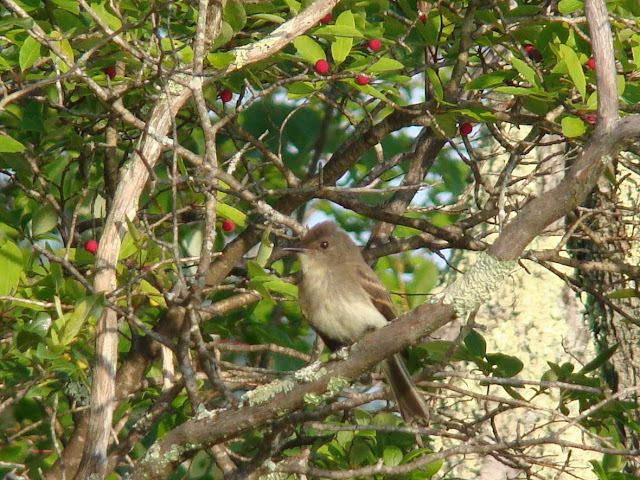 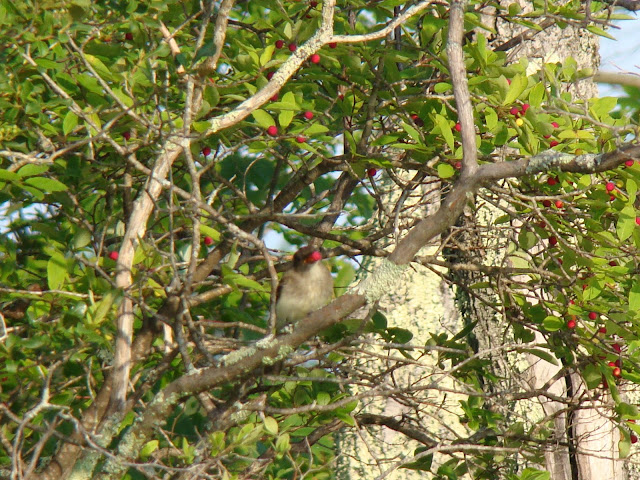 Those pictures were taken in the morning near a marsh where many Fragrant Water Lilies are blooming.  They provide quite a colorful show on the water. 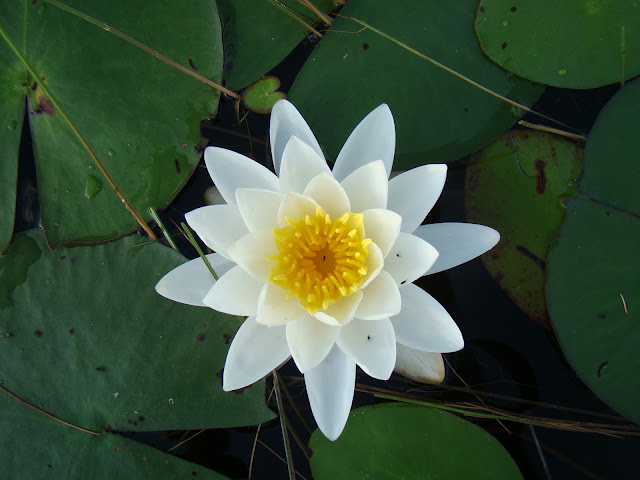 There has been a fair amount of Gypsy Moth damage to the trees this year, primarily the oaks, which are their favorite food source.  However, some of the damaged trees are now putting out new growth where their leaves had been decimated.  These young, red oak leaves will have time to mature and provide extra energy to the trees to help them survive the assault. 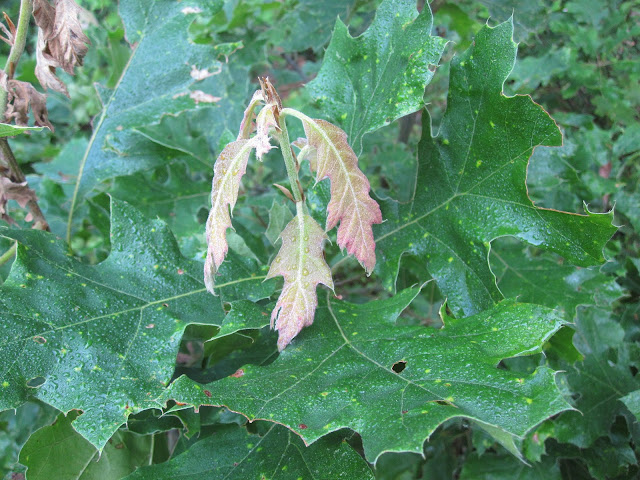 Let's hope the more pleasant summer weather will stay with us for a while now.
Posted by Scott Powell at 9:34 PM No comments:

Lake Wicwas is enveloped in a summer weather pattern.  More hazy, hot, humid days with strong thunderstorms.  The result is the lake is still 8 inches above full level in the middle of July.  When the thunderstorms are at bay, like the past two days, we've had some very calm and quiet days.  I've been entertaining myself watching the fly catchers around the lake.  A small flock of King Birds has been in the area, sitting in the tip-tops of the oak trees in the afternoons and evenings, flitting out and catching numerous insects large and small. 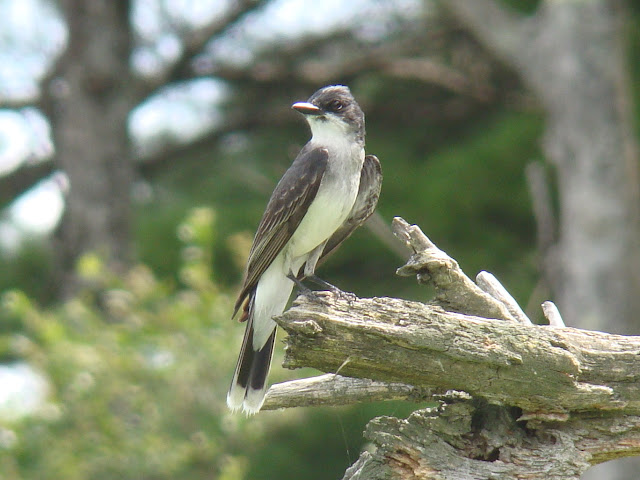 One pair was bringing tasty morsels their chick.  One evening they were joined by a group of Great Crested Flycatchers.  These birds were also catching insects on the wing, but they also hopped around in the branches, picking caterpillars and other bugs right off the leaves.

Here's an insect that managed to escape the birds, collecting its own sustenance.  I wonder if the birds would go after a bumble bee.

All the animals around Lake Wicwas are taking advantage of nature's summer bounty to fatten up.  Look at the size that the Water Spiders have attained in just a few weeks:

I saw a blueberry bush shaking on a perfectly calm day, and found the culprit - a chipmunk enjoying a good anti-oxidant meal.
Look at those fat cheeks: 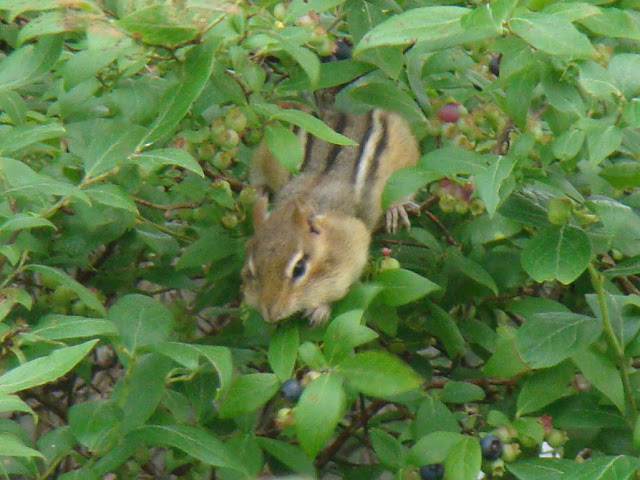 There goes another one! 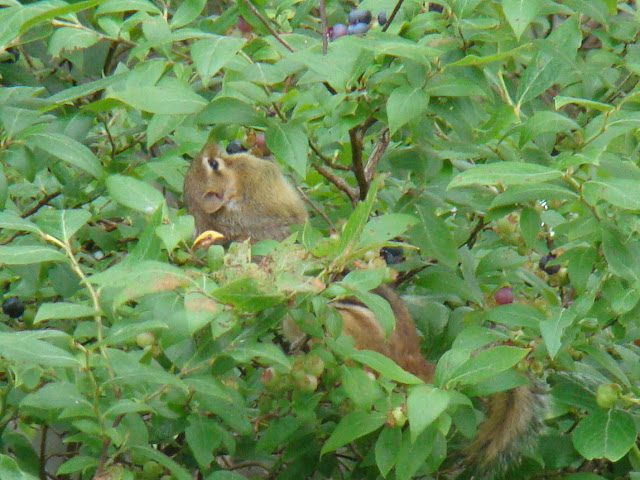 On a visit to Arbutus Hill a generous farmer shared their crop of fabulous blueberries with us - much easier than competing in the wild bushes with chipmunks and mosquitoes!  On the plus side, although still plentiful, the deer flies have started to decrease in number.

The summer flowers are still blooming, but some of the best color can be found at, or on the water.  The water lilies and pickerel weed are bloonming, as is a pretty pink flower I have yet to identify.

After another great summer weekend, I just can't resist adding yet another warm summer day sunset. 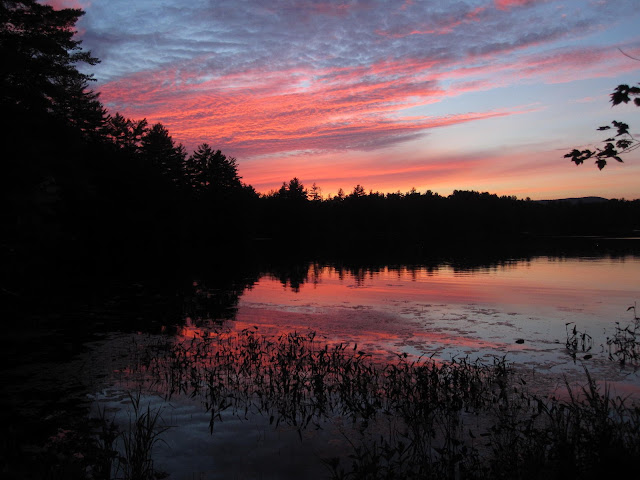 After several more days of near constant rain, the weather finally turned just in time for the holiday weekend.  Although it was still very humid, at least the rain went away so everyone could enjoy their outdoor events.  The lake was busy with boaters, fishermen, and swimmers. 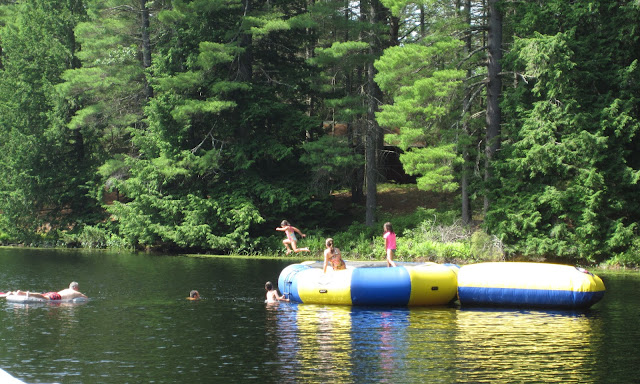 One of the highlights of the summer season for me has begun:  Blueberry season.  They are just starting to ripen in the sunniest locations, and should be going strong for several weeks.  All the rain and now the hot weather has made them very plentiful this year. 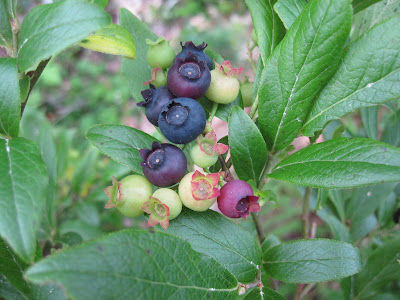 We're looking forward to lots of blueberry-themed breakfasts, desserts, and all kinds of treats! 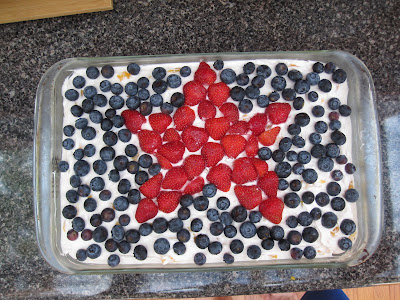 As for wildlife around the lake this week, it has been pretty quiet as expected with hot and humid days.  There are lots of nighttime sounds, but not much visible during the day.  I did see a couple of hawks and a Turkey Vulture, as well as the loons.  There has been a single loon as well as a pair on the lake, and occasionally a group of three loons fishing together.  I can only guess that the group of three might be the pair and the lone celebrating their own Fourth of July event.  It's not looking like there's going to be a chick hatched on Wicwas this year.

The highlight of the week was seeing a young bear run across the road right in front of me one morning on a run.  It came up out of the swamp in the Chemung Forest, bounded across Chemung road, and up into the woods by Old Stanton Road.  It left big, wet paw prints on the road, and lots of sprinkles of water that shook off its fur as it ran.  Alas, it was far too quick to even think about getting a picture, and I wasn't about to follow it!

So, no pictures of animals around the lake, but there were lots of humans enjoying great summer weather in New Hampshire, and the humidity made for awesome sunsets.

Posted by Scott Powell at 7:58 PM No comments:

The theme for this week at Lake Wicwas has been water:  Rain, clouds, showers, fog, thunderstorms, humidity - everywhere it's been wet.  The lake is full, the streams are flowing profusely, and the bugs - they are about the only creatures that thrive in this weather.  The deer flies seem to be having an especially good year.  The Mayflies also came out this week, as usual, one month late based on their name.


The Mayfly has some unusual characteristics.  For one, after living as a an immature "naiad" for up to a year in the water, once it matures into an adult, it lives only a day or two.  (Its species, Ephemera, means short-lived.)  It is also unique in that it is the only insect that molts after it has developed wings.  It undergoes many molts during its life as a naiad in the lake, living under rocks or leaves at the bottom of the lake.  Its final molt as a naiad is to a winged "subimago" which can fly, but is not sexually mature.  This near-final stage then molts once more into the final adult form.  This explains why I find Mayfly skins up on the windows facing the lake - they must fly up from the lake, and then perform their final metamorphosis.  After that, they mate, lay their eggs on the surface of the lake, and die.

Out on the trails around the lake, I found many more Red Efts (Eastern Newts) enjoying the damp weather - they don't need to hide under ground when it's so humid, so they can be out exploring and looking for food. 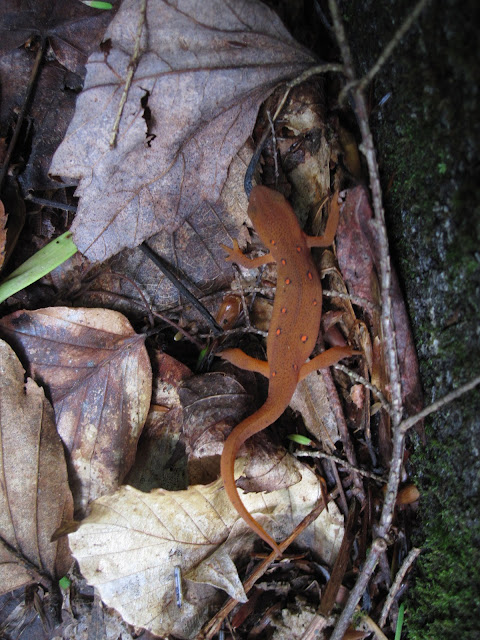 At the other end of the animal spectrum, I came across some very fresh Black Bear scat right in the middle of a trail.
It shows their current diet is mostly vegetation and seeds.  This was not a very large animal based on the size of the scat. 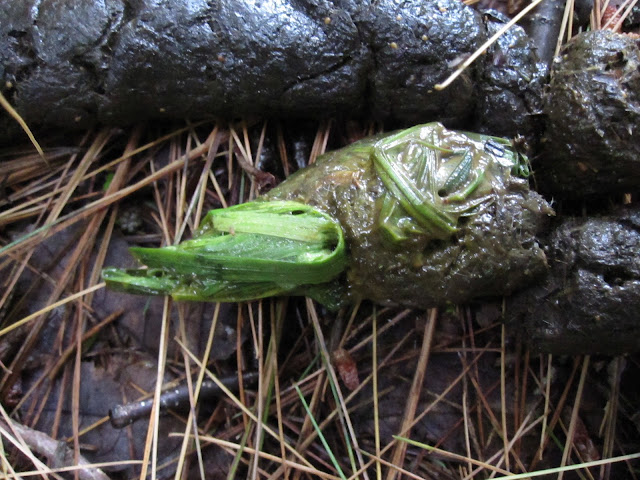 All the rain has reconstituted the vernal pools, turning them into "estival" pools.  (I had to look that up:   "estival" is the equivalent term for summer, and "hibernal" the term for winter!)

With all the water, the lush growth, and the high water content in the air, it's looking more like a tropical rainforest than northern New England! 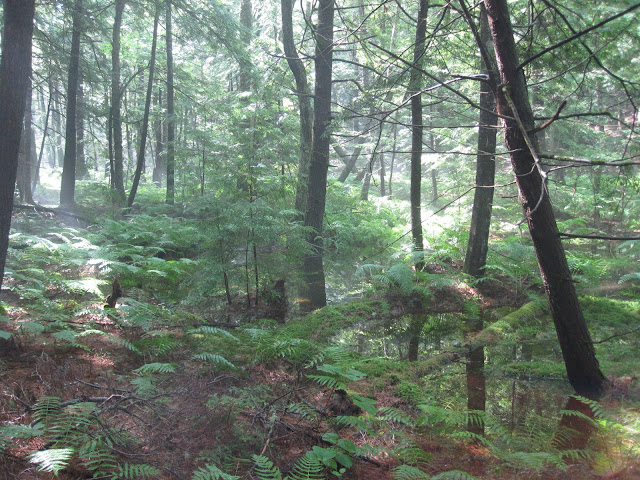 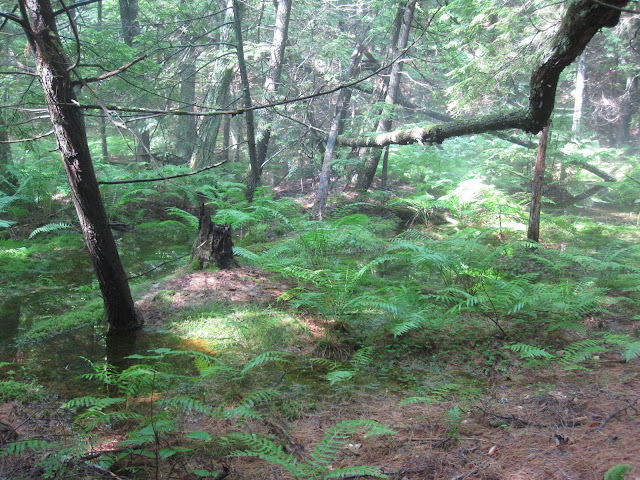 Let's hope things dry out a bit in time for the holiday weekend.  Have a fun and safe Fourth of July!
Posted by Scott Powell at 9:38 AM No comments: