More snow, and more cold weather! It’s hard to believe that a week ago I was thinking I was done going out on the ice. Now the openings around the shore have frozen solid again, and the ice has firmed up completely. Admittedly, 2010 was a record-early spring and ice-out, but at this point last year the ice was completely gone from Lake Wicwas, and this year it’s still two feet thick. The only openings right now are where the streams empty into the lake.

The wildlife must be struggling to find food, and wondering where spring is. Look at this poor little guy, out searching for something to eat and thinking, what is all this white stuff doing in my backyard?

Maybe the cold weather will keep the bears in hibernation a bit longer, because if they come out now, their usual food supplies won’t be available, which could result in even more human interaction than usual. But it will be sad to bring in the bird feeders.


The snow pack is still deep, but the surface just under the latest few inches of snow is frozen, so one can walk through the woods easily without snow shoes. Today we took a walk around Sheep Island, and found lots of otter tracks all around the lake. We saw their signs from sliding down the shoreline out onto to the lake, as well as gallivanting around on the ice in circles, bounding along, and then sliding along on their bellies leaving long, smooth trails.There were clearly at least two of them playing together, as their trails merge and split, and follow each other all around the lake. 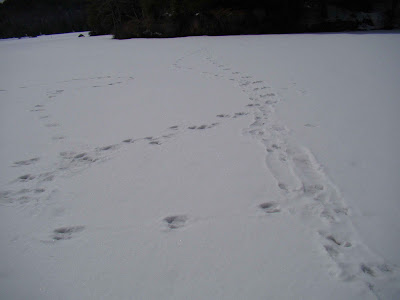 And one of them was obviously curious as to when spring will arrive. 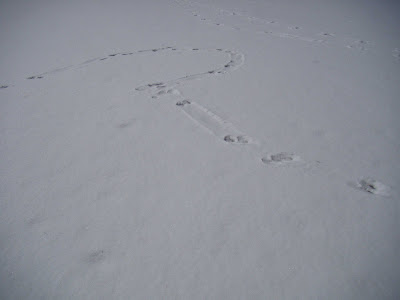 We also found the remnants of an old lightning strike.  This huge white pine was split right down the middle, with the upper portion of the tree jammed into the lower portion.  There is still evidence of charred wood in the split. 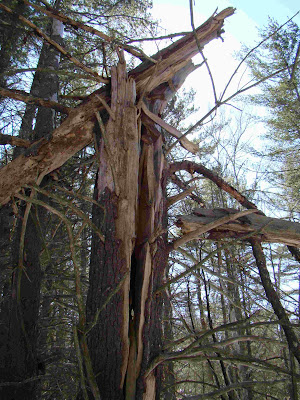 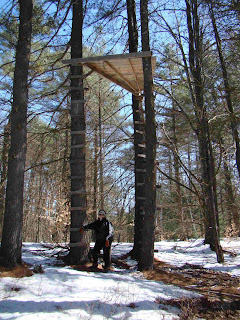 Then we found another interesting artifact in a stand of white pines.  One just never knows what will grow on the shores of Lake Wicwas.

While we're on the topic of white pines, here's one that has fed a lot of pileated woodpeckers over the years.


The living plant progress was slowed considerably this week due to the cold weather, but the maple sugar season must be doing very well. I found a large icicle hanging from a branch of a maple tree where it had been damaged by another tree; it was sap from the tree that had oozed from the wound. Even though it wasn’t a sugar maple, it still had the sweet taste of maple sugar. Seeing this reminds me of how fascinating it is that liquid can run freely inside a tree – that is clearly below freezing temperature – only to freeze as soon as it leaves the confines of the cells in the plant. The Taggetts were boiling sap in their sugar house this weekend - be on the look for their syrup in a few weeks.

The one sign of spring progressing is the increasing size of the open water at the dam.  The strong current from the runoff continues to erode the ice;  the water level is four inches below full-lake, and there is still a strong rush of water over the lowered dam.  This is also reason to be careful on the ice at any time of year.

Oh, and for the record, it was 16 degrees this morning, with a wind chill of 2 degrees below zero. On March 27. At least the sun was shining!
Posted by Scott Powell at 6:17 PM No comments:

We had two beautiful March days at Lake Wicwas this weekend, with seasonable temperatures and bright, warm sunshine.  With today being the vernal equinox, the sun is as strong now as in late September, and we can really feel the solar warmth.  We even had clear skies to see the full moon, with its closest approach and largest, brightest appearance for the next 18 years!

I went for a snow shoe trip this afternoon to see what's happening in the woods, and found that the woodpeckers are starting to sound their mating and territorial calls, hammering away on the dead, resonant trees. 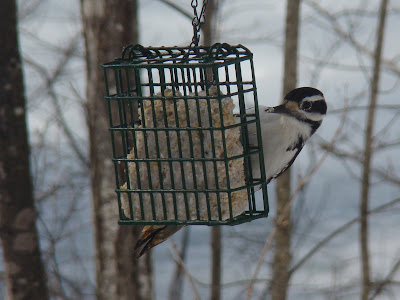 Later on this male stopped by our feeder for some suet.  There are also a lot more red squirrels out and about than we've seen all winter.  Suddenly there are many small, healthy, brightly colored animals running all around on the firm snow cover, and making tunnels from tree to tree.  We also saw our first chipmunks this week.

As for the larger animals, there are still no deer moving around, and the fox, traveling mostly at night or in the early morning when it's cold, aren't leaving many tracks.  Likewise the porcupine aren't leaving tracks, but their signs are clearly evident.  There are cut-off branches on hemlocks everywhere, and the ground is littered with branches they have cut, and then left on the snow. 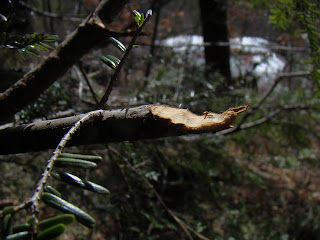 Many animals will soon be feeding on the spring buds of trees - these maple buds are first I've seen this spring.  Considering the deep snow cover this late into the spring, it is likely to be a year with lots of bear-human interaction, as the bears will become active while much of their natural food supply is still covered with snow.

Posted by Scott Powell at 7:04 PM No comments:

The battle between the seasons continues on and around Lake Wicwas.  Winter launched a feeble attack on Wednesday with a few inches of snow, but today Spring made a major assault, bringing in warm air on strong west winds, raising temperatures all the way to 65 degrees.  The new snow freshened up the ski trails again, and it was so warm I skied in shorts and a t-shirt.  I saw no animal tracks since the snow on Wednesday. 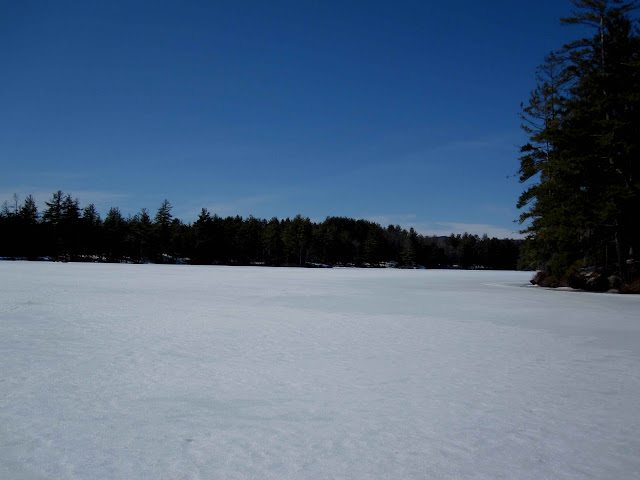 Out in the middle of the lake in the afternoon I could hear water running - it was the ice melting and flowing down through the porous top layer of ice.  I cut a hole and found there is still 25 inches of ice just ten feet out from shore, with a good nine inches of solid ice below 16 inches of soft ice.  It may be the end of venturing onto the ice though, as the edges of the lake are getting  thin now. 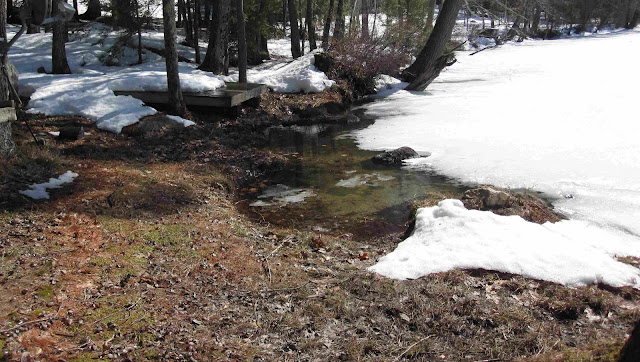 At the outlet there were some large open areas by mid afternoon, with a strong rush of water flowing over the dam, and the stream flooding wide onto its overflow paths.

But here is a sign of who will ultimately win this battle.  Even though these are right next to the house, the signs of life pushing up, right through the ice and snow, show that spring is coming to Lake Wicwas. 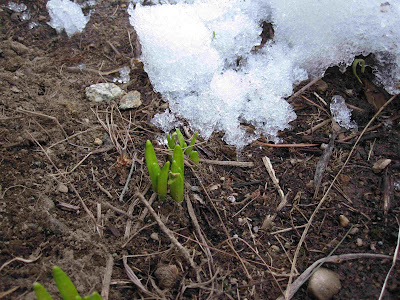 Posted by Scott Powell at 9:37 PM No comments:

Email ThisBlogThis!Share to TwitterShare to FacebookShare to Pinterest
Labels: Ice

After a few weeks away from Lake Wicwas for a visit to Colorado for some skiing with the kids, we found there was a tug of war taking place between winter and spring while we were gone.  Winter took a strong shot with another good dump of snow two weeks ago, but then last week spring countered with some warm weather and a good dose of rain.  Overall, spring came out on top, with a reduction in the snow pack by several inches, especially in the open areas.  In the woods, it seems more like a draw - there is still close to three feet of snow. 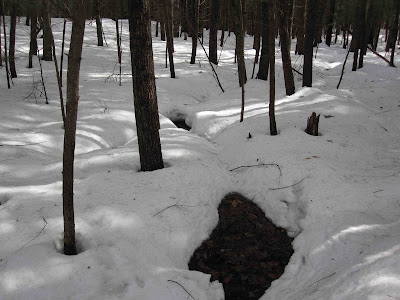 Where the run-off has flowed beneath the snow it has melted the cover down to the ground, showing the depth of the snow pack.  It makes stream crossings on snow shoes a challenge.

This weekend we had classic New Hampshire March weather, with a little sun, a lot of clouds, moderate temperatures, and threatening looking skies, even though there was no preciptitation.  The surface of the lake is firm and extremely uniform.  The total ice depth is a good 18 inches, with perhaps 6 inches of porous white ice on the surface.  If we had a good cold night, one might even be able to skate on it, though it wouldn't be very smooth. There were several groups of ice fisher-people out this weekend, certainly appreciative of the better lake surface. 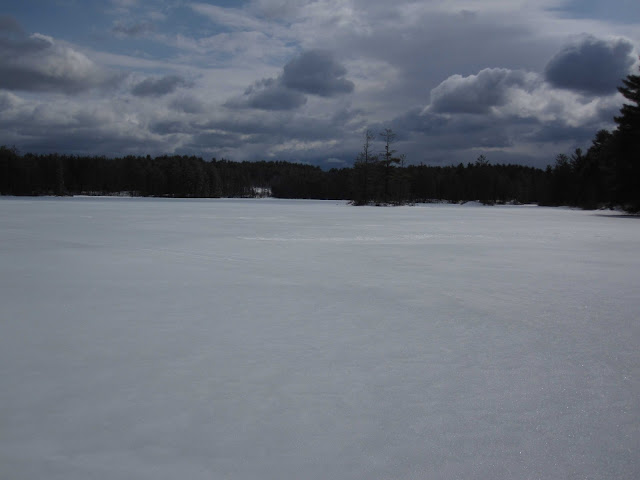 But the impact of the run-off from the rain is starting to make changes to the lake.  There are open areas around the shore of the lake, especially where the streams enter the lake. 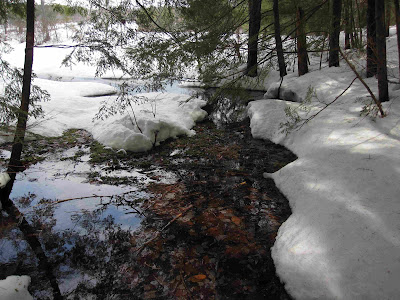 Construction on both ends of the lake is moving along, with one house looking weather-tight, and like it will be ready for summer. 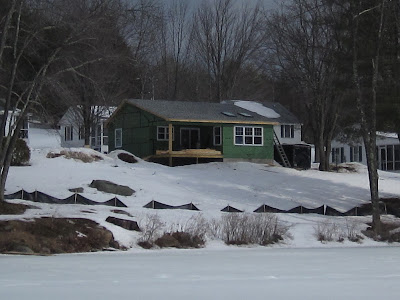 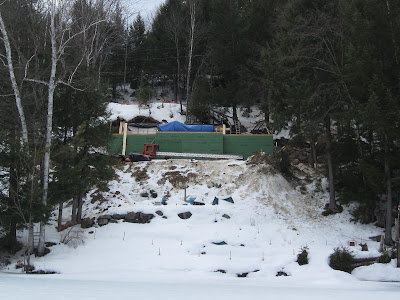 The other isn't making quite the same rate of progress, but it's starting to take shape. 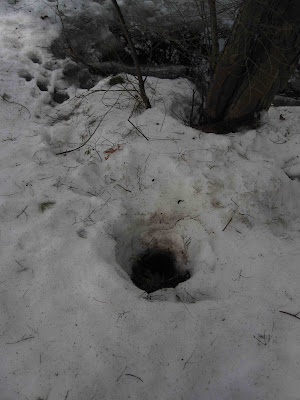 The cracks of spring are also bringing more animal activity.  There are lots of signs of otter venturing out of the cold water onto the warmer land.  This otter tunnel opening was several feet from the shoreline, with tracks heading up the hill away from the lake. 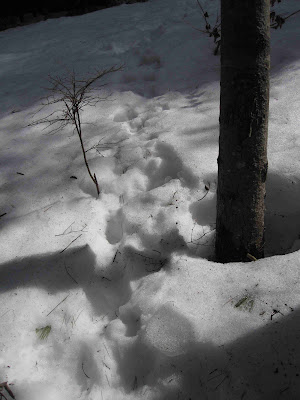 Along the lake under the trees were tracks where the otter had slid along the ice on its belly.  It also left its tell tale scat of fish scales nearby. 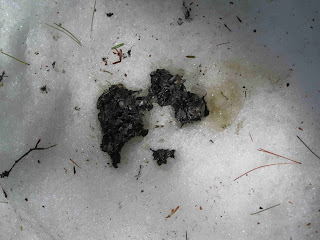 The wildlife are already enjoying the early victories of spring over winter;  we'll be joining them soon enough.
Posted by Scott Powell at 8:40 PM No comments: