Wednesday night's warm rain took the ice back out of Lake Wicwas!  It was 47 degrees overnight - the peak temperature recorded sometime around 2:00am.  There was heavy rain, and although much of the lake remained iced-over, the main body of the lake was completely open today, even today after a very cold night last night.

This means that even if it freezes back over tonight, it will be the latest ice-in I've recorded - just barely later than 2006 when it froze over on December 29th. We shall see.
Posted by Scott Powell at 10:34 PM No comments:

This evening we experienced yet another new creature at Lake Wicwas - something we've never seen before:  a flying squirrel.

They are reportedly quite common in this area, but being nocturnal, they are not often seen.  Flying squirrels do frequent bird feeders, but since we don't put our feeders out during bear season, and we don't usually bird-watch in the middle of the night, we've never seen one.  This evening though, Linda turned on the light to see if the approaching cold front was bringing any snow, and there on the feeder was this cute little guy.

I don't know if it's a "northern" or a "southern" flying squirrel, but I'll guess a northern because of its rich brown coloring, where the southern has a lighter fur in the winter.  The northern is larger, and this one seems rather small, but it was scrunched up due to the cold, so it's difficult to judge its true size.

It hung onto the feeder for a long time - at least 30 minutes - trying to get to the seed, which it couldn't reach with its short legs.  Linda spreads lots of seeds under the feeders for the ground birds, and the squirrels enjoy that as well, and they know that where there are seeds on the ground, there's a source up above!

You can see the dark line that separates its dark uppper-body from the the light fur on the underside of the layer of skin that stretches between its legs and its body that it uses to glide from tree to tree or from tree to ground.

This guy was not at all concerned about us or the light coming on the middle of the night - it made no attempt to run off.  In fact, it let me go out and take a couple of pictures with a flash from only a few feet away!  I thought when I went out it would leap off the feeder, but instead it just hung on with its little feet, and went on trying to crack the cache.

One more of nature's fantastic creatures observed on the shores of Lake Wicwas!
Posted by Scott Powell at 9:38 PM 1 comment:

8.4 degrees last night just about did it.  By mid morning the entire lake was frozen except for one section in the widest part of the lake, and I expect that was frozen over by sunset. 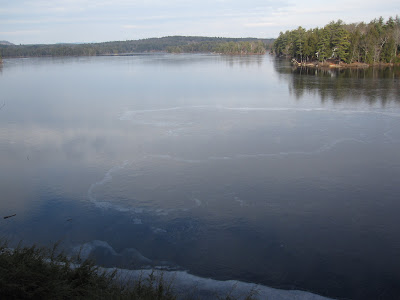 It looks like beavers finished their building just in time.  Now all we need is for the cold weather to stick around long enough for the ice to bulk up, and we'll some fantastic skating.  With the lack of snow we're having this year, there's good chance, but then after all, this is New England.

Posted by Scott Powell at 5:30 PM No comments:

Email ThisBlogThis!Share to TwitterShare to FacebookShare to Pinterest
Labels: Ice In 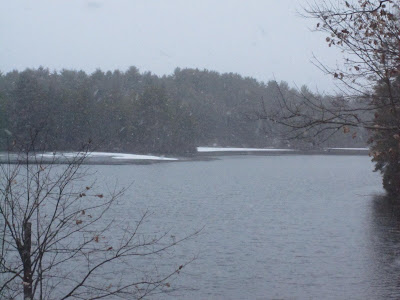 It's starting to look a little like winter around lake Wicwas.  A light dusting of snow fell early Saturday, just frosting what little ice there is around the edges of the lake.   By noon the sun was out, shining on the fresh snow and blue water. 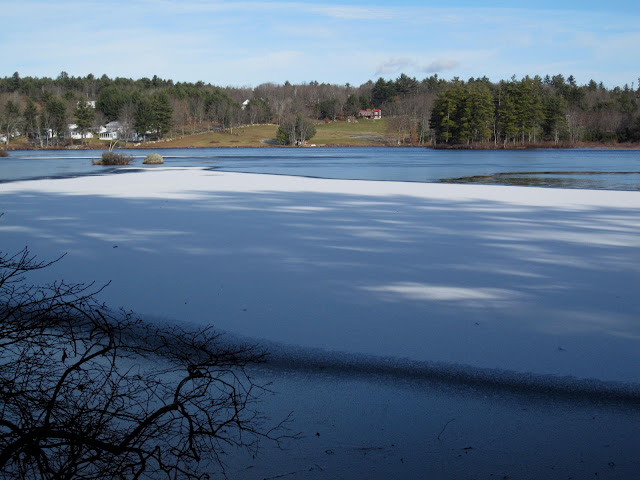 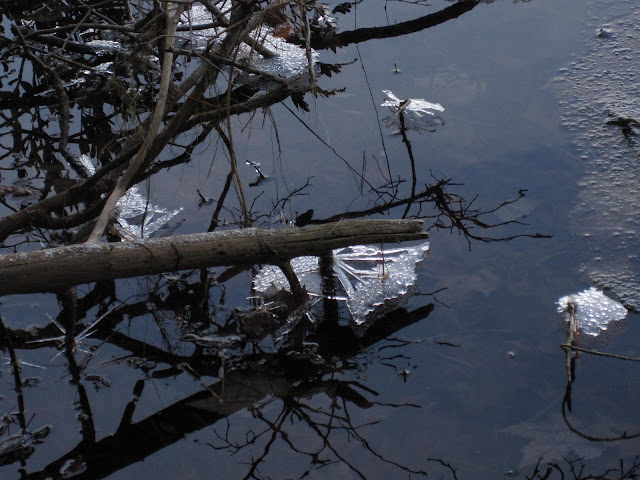 Saturday night was quite cold, down to about 13 degrees, which encouraged the ice to grow farther out from shore, at least in the coves.  During the day the edge continued to creep outwards, and we watched the pattern form:  smooth ice when it was calm, interrupted by rings of roughness when the wind blew water up onto the ice and froze. 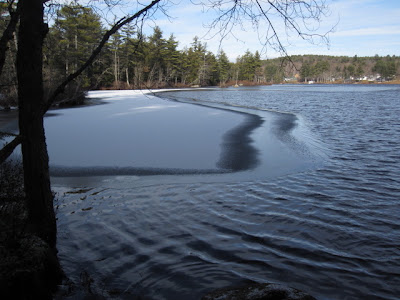 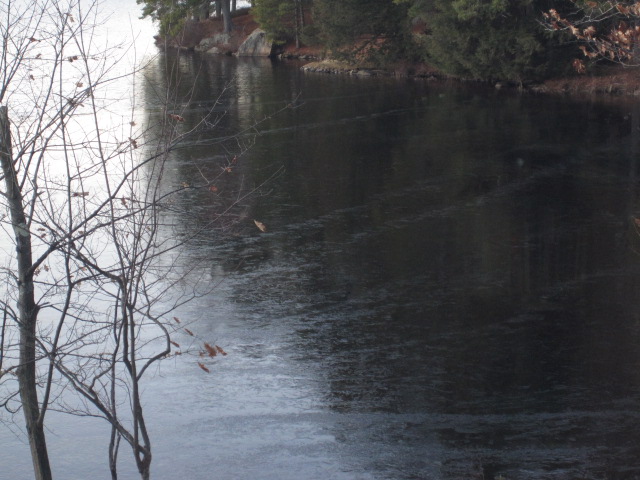 The main body of the lake remains ice-free, but with another cold night, it should start to freeze over.  If it stays cold this week as forecast, the whole lake will likely freeze in the next couple of days - and maybe this time it will last.  It will be the latest ice-in since 2006;  that's the year that winter came so late that loons in Lake Winnepsaukee had molted their flight feathers by the time the ice came, and they had to be rescued.  We haven't seen our young loon for a couple of weeks now, so we're guessing it has flown off to the ocean for the winter.

We also noticed that the beavers were busy on their lodge again this week.  They have pulled mud up from the bottom of the lake and packed it in all around the new framework they built in the prior few weeks.  They then threw a few more branches up on top for good measure.  Here are pictures comparing last week with this week.

Posted by Scott Powell at 8:30 PM No comments:

Winter creeps ever closer towards New Hampshire and Lake Wicwas.  There have been one or two glimpses of snow in the area, and an occasional skim of ice along the shores of the lake, but it is looking like we'll have a late ice-in for the start of the 2011-2012 winter.  People up north are trying to make up for what nature is lacking, and the product of snow guns can be seen forming a white arc on Mount Tecumseh from the north-facing hills around the lake.

Back closer to home, the full Cold Moon could be seen setting late in the morning behind a thin ribbon of ice.

It is quite strange to see the full moon hanging so high in the sky late in the evening - well above the trees, much higher than the sun rises at its zenith.  The full moon has a trajectory opposite of the sun, so near the solstice, when the sun is low, the moon rises high in counterbalance.

I mentioned in November that the November full moon was known as the Trading Moon.  It is also called the Beaver Moon, and this year, that certainly is fitting.  Since last week, the beaver have been back to the same area, clearing more and more of the trees.  But if you want your trees back you know where to find them - they have used them to construct a second story on their lodge for an in-law apartment!

The heavy rain this week has brought the lake back up near flood level again, at almost a foot above normal level even with the dam allowing a very large flow.  I saw one pair of common mergansers near the south end of the lake, and still more pairs of ducks.

Hunting season ended this week, and some of the local deer have eluded the hunter's sights, as we found fresh hoof prints after the heavy rains.  We also found evidence of an animal strategically marking its territory in a highly visible - and olfactory - location. It is most likely a fox, as this is their characteristic mark, and it's on a trail where I often see fox, but it's large enough that it could have been a coyote. 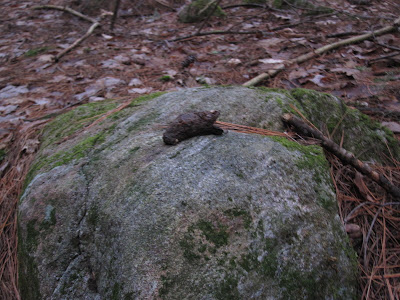 Posted by Scott Powell at 6:34 PM No comments:

Winter is approaching slowly at Lake Wicwas, after a couple of false starts with early snow storms.  Two cold nights in a row brought a bit of ice to the edges of some protected coves, but that is about all.

The ducks continue to come and go, traveling in groups of several pairs, though we did not see the remaining loon this week.


The beavers, however, are very much visible, or at least their handy-work is.  We found  a low section of the shore line where they had taken well over a dozen trees in the last two weeks.  The area is getting thinned out. 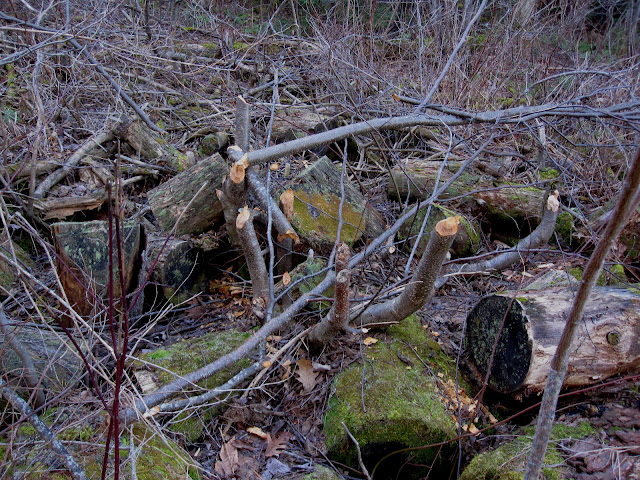 They have worn themselves quite a pathway where they come out of the water, and then drag their harvest back down to the lake.  This entire shore used to be thick with two to three foot high shrubs.


They were mostly taking the birch, with some as large as four inches in diameter.  This one they cut down, but left the tree.

They leave behind wood chips of surprising size;  the grooves left where their two incisors cut into the tree are visible in the chunks of wood.  The strength of their jaws and teeth must be tremendous. 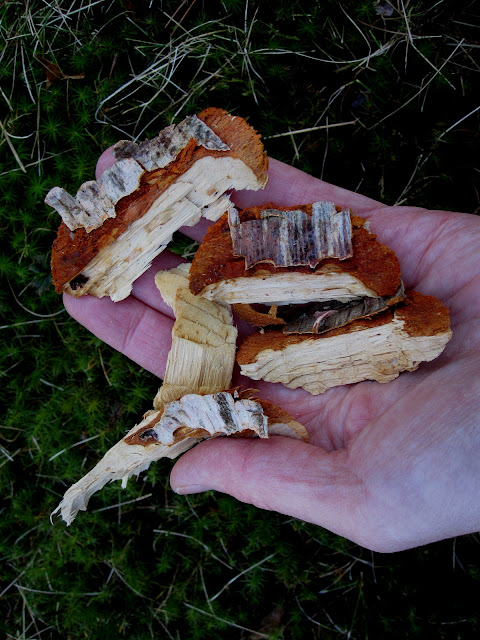 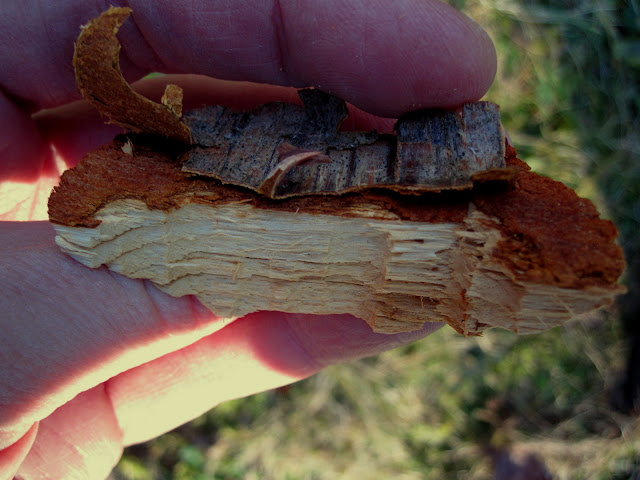 Another update on Child's Park:  Sturdy wood benches have been installed, and the base of playground is being delivered and spread around the equipment. 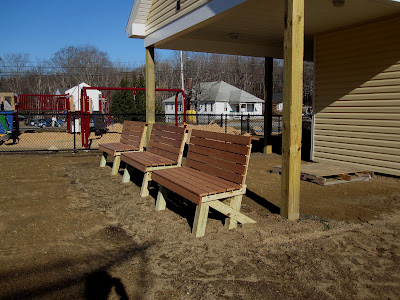 The fruit of the winterberry contrasting against the drab backdrop of December is a bright reminder of the season that is upon us.  They raise the caloric intake of the birds that feed on them, as well as the spirits of those who see them.

Posted by Scott Powell at 5:11 PM No comments: