The cold weather continues to bring winter closer, and with short days, the full moon set this week early in the morning.  This is a "blue moon" because it is the third full moon in a season that has four full moons, a relatively rare event.  Full moons this fall occurred on September 23, October 23, and will happen again on Dec 21, just before the winter solstice, thus fitting in four full moons between the equinox and the solstice.

Last week ice was forming only in the most protected areas, but by this week there was ice in some of the smallest coves - the cove right beside Chemung Road had a skim of ice by Sunday morning.

Signs of the coming ski season are also visible.  From the White Mountain Ledge in the Hamlin area one can see the ski trails on Waterville Valley turning white.  In fact, if you look carefully you can make out the clouds of snow coming from the snow-making guns at the top of the Sunnyside Lift.  The curve of white is the top of the trail "True Grit" going down to the right and "Oblivion" down to the left.  With binoculars you can see the summit lift buildings, as well as the radio towers near the top of the High Country Lift on the summit to the left.  Mount Osceola is behind and to the right.

We saw more signs of rabbits around Lake Wicwas, (much to Linda's dismay).  This branch shows the tell-tale nibbling of a rabbit, cut clean at 45 degree angle, looking like it was cut by shears.  Deer make a more ragged cut, as they don't have upper and lower incisors to make a clean cut, so they tear and pull at the branches, leaving them ragged.

On an afternoon walk I saw this large glacial erratic with a beautiful, healthy crop of lichen growing on its northwestern side.  If you're ever lost in the woods, this is supposed to be edible and somewhat nutritious.  I'm told is best to boil it to soften in up. 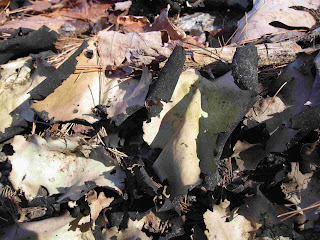 I haven't seen or heard any loons for a couple of weeks now, so they may have flown off for the winter.
Posted by Scott Powell at 6:11 PM No comments:

Lake Wicwas experienced both extremes of November this week:  cold, wet, windy weather early in the week, offset by fabulously warm, sunny, calm days with crystal blue skies on Friday and Saturday.  With very low humidity - dew points were in the teens - the temperature dropped into the twenties over night, and I saw the first skim of ice on Lake Wicwas in the protected marshes, with some wonderful shapes and patterns. 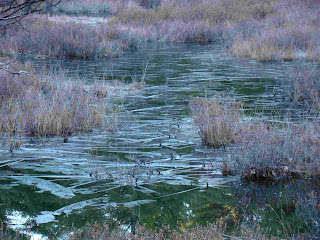 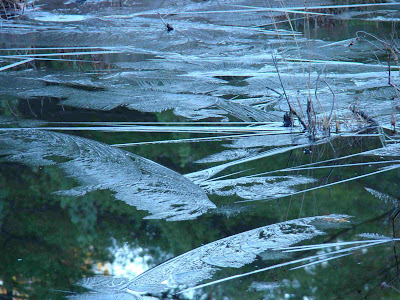 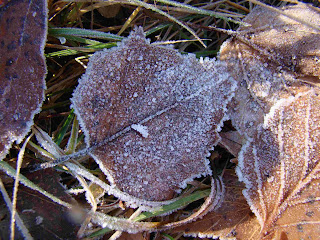 As late as noontime the frost was still holding on in shaded areas even though the temperature was well into the fifties in the sun.  The combination of temperature and low humidity was just right to form ice crystals on the edges and the veins of dry leaves lying on the ground in a field that was exposed to radiational cooling.  Leaves just a few yards, leaves away under the cover of trees had no such crystals. 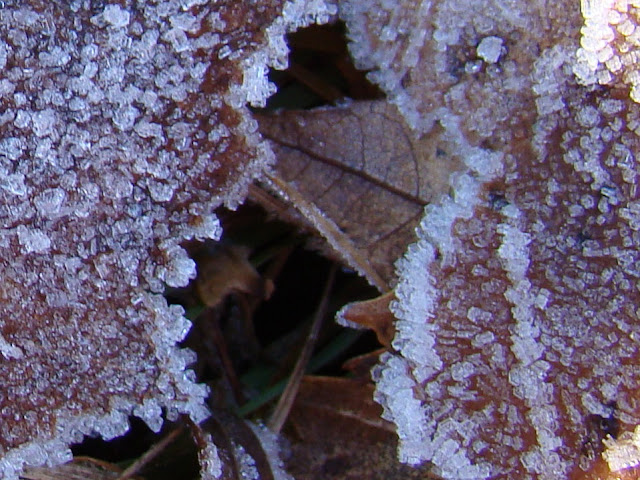 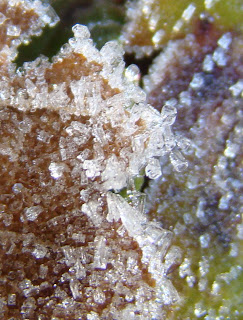 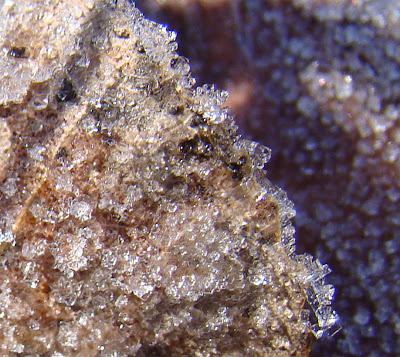 By early afternoon it was warm enough to go for a paddle.  It was so calm, and with not a single other boat on the lake, the entire lake was a mirror from shore to shore. 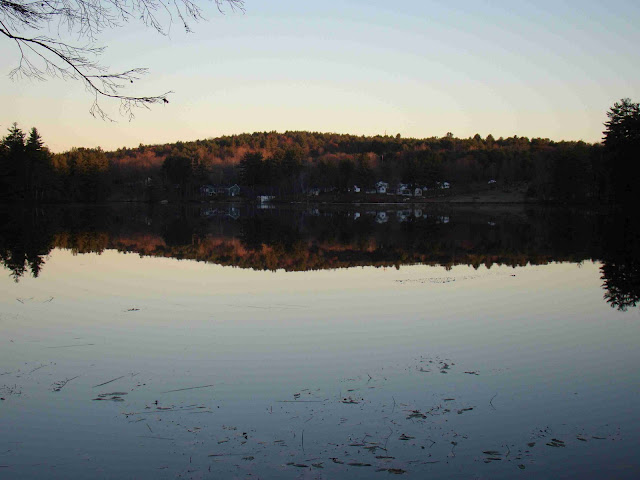 I saw only a lone duck, and just one loon, though it took us some time to identify it, as it already had its winter colors.  All the boats are off the lake now, some shrink wrapped for their own form of winter hibernation.  All the docks have been pulled as well, excepting the three docks on the Henmor Properties….  The water is perfectly clear, and the lake level is back to within one or normal level;  the town has removed a board from the dam, and with water flowing rapidly the lake will soon be down to its winter level.
With not a lot of human activity around the lake this time of year, it is one of the best times to see uncommon animals, and on Friday we were treated to a visit by an ermine.  It spent several minutes searching all the holes around our yard where the mice, chipmunks, and squirrels might hide.  I was amazed at how quickly it could move; I thought a chipmunk or squirrel is fast, but this animal is in another league.  I’d be looking right at it, and it would just disappear, and reappear several yards away.  The ermine also had its winter coat on already – snow-white, with just a black tip on its tail, and a pink nose.  The long-tailed weasel has almost identical markings, but is quite a bit larger.  Based on its size, this was almost certainly an ermine.  It was far too quick and shy to get a good picture, but here are a couple of shots as evidence. 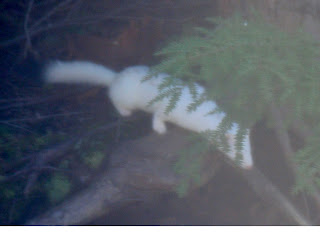 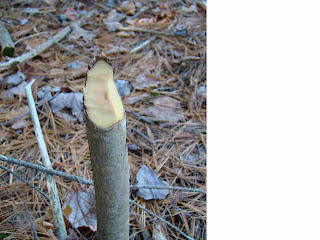 I also saw a fair amount of new beaver cuts, mostly young saplings used for food more than construction.  They must be stepping up their activity to build their stores for the winter.
Posted by Scott Powell at 10:36 AM No comments:

Another sign that the cold weather is coming:  the animals are putting on their warm winter coats.  Here's a picture this week of the red fox, followed by what he (she?) looked like back in the middle of summer (August 8th):

In addition to lots of deer and moose droppings, there was this otter scat left right in the middle of a trail about 30 yards from Lake Wicwas.  Otter scat is distinguished by a very soft consistency, and a preponderance of fish scales. 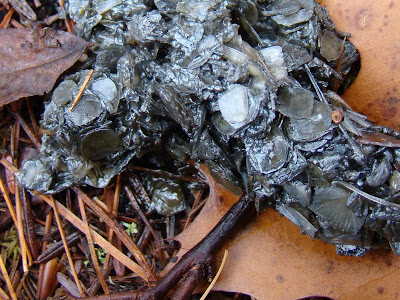 If you've been on the trails around Lake Wicwas you may have noticed a lot of surveying flags.  According to Don Berry, president of the Lakes Region Conservation Trust, the town of Meredith is doing a ground water assessment, and these flags are part of the ongoing research.  They are going to be removed when the assessment is complete. 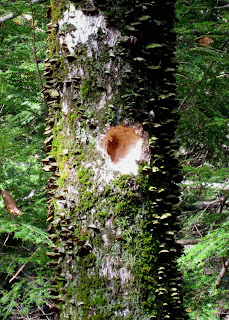 On the ridge on the red trail going towards the White Mountain Ledge in the Hamlin area, I saw pile of fresh wood chips on the ground, and looking up I saw the hole in a dead tree where the pileated woodpecker had been pursuing insects.  It wasn't the distinctive square hole one usually finds, but clearly the work of a pileated.  As I stopped to take a picture, I heard the bird hammering away at another tree nearby.  And then, a few minutes later while looking out over the White Mountain Ledge, I saw the bird take wing across the expanse to the north, flashing its distinctive white wing spots as it flew, and landed in white pine.

There has been lots of other bird activity this week, including Blue Jays, which have not been prevalent until the last couple of weeks.  I saw a group of seven migrating mallards, but I did not see any loons - has anyone seen them in the last week?

Finally, although the water is receding, it is still high and flooding lower lying areas around the lake.
Posted by Scott Powell at 4:22 PM No comments: