Thursday it was 82 degrees and we were swimming in the lake.  Today the high temperature was 58;  it was 39 degrees in the morning with mist rising off the water as a few ducks swam by at sunrise.

We humans have air conditioners and heaters to help us deal with the rapid changes; wild creatures aren't so fortunate.  Amphibians and reptiles manage fine as they have water to retreat to, or perhaps they will venture down into the first few inches of the earth - the ground is still warm, as is the water (the lake surface was still 72 degrees on Friday).

I saw this huge snapping turtle crossing Chemung Road early one morning, traveling from Lake Wicwas to the wetlands in the Chemung State Forest.  She's quite a specimen.

Can you see her sharp jaw, her claws, and the spikes on her tail?  She looks like something right out of the Jurassic period.  The large snappers are females;  here she is with the road in the background to provide some size perspective. 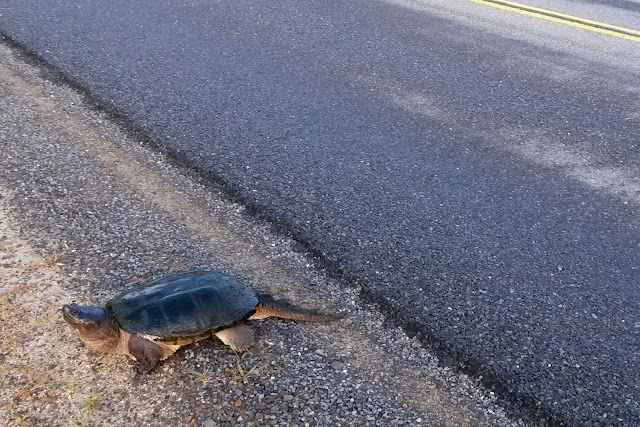 I hope you'll understand why I didn't put my foot down next to her to provide a scale!

Fox, chipmunks, and many other mammals can retreat to their dens to keep warm on these first cool nights, but they still have to get out in the cold morning to look for food, as this is critical time for building up winter stores.  Bears have no problem keeping warm overnight in a den, and they are now building up both a layer of fat and a thick fur coat to keep them warm all winter.  They need to store up a lot of fat during the summer and fall, as they lose 20 to 30 percent of their body weight over the winter.  I saw evidence of one of these large animals working on its winter store of fat.

This black bear had ripped into a rotting tree trunk so it could feast on the insects or eggs or larvae that were inside.  A backpack provides some perspective on the size of this activity. 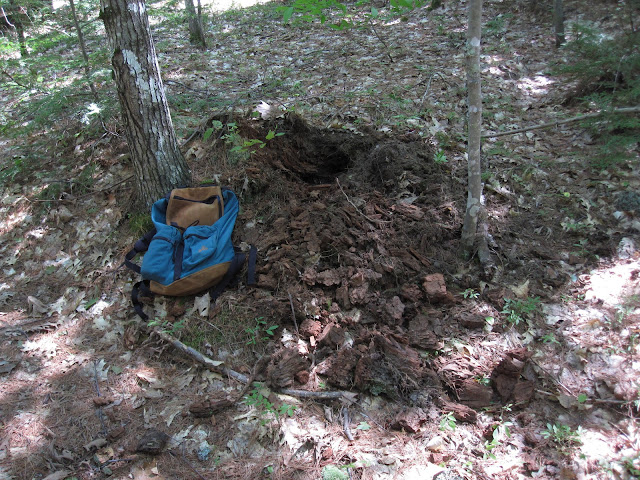 Chipmunks also will be warm in their underground dens.  They won't put on a lot of winter fat but rather will collect stores of food to consume throughout the winter.


But what about squirrels and deer and other animals that spend the night above ground?  It has been so warm this fall - I wonder if their coats have started to thicken up yet. This young White Tail Deer is still wearing its spring coat, and is just now getting its first taste of cool weather.

It's going to be in for a quite a shock when it experiences its first New Hampshire winter - assuming it's a real winter that is, unlike last year.

The dry, warm summer has perhaps slowed the foliage just a bit, but color is beginning to appear around the lakes, starting first in cool, low-lying wet areas.


Perhaps the shock of cool weather will move things along quickly now. 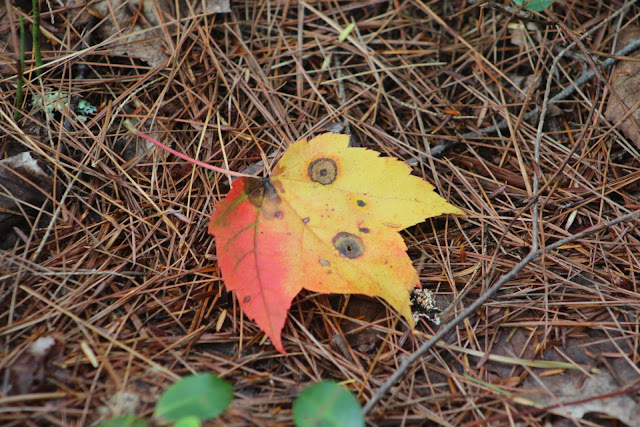 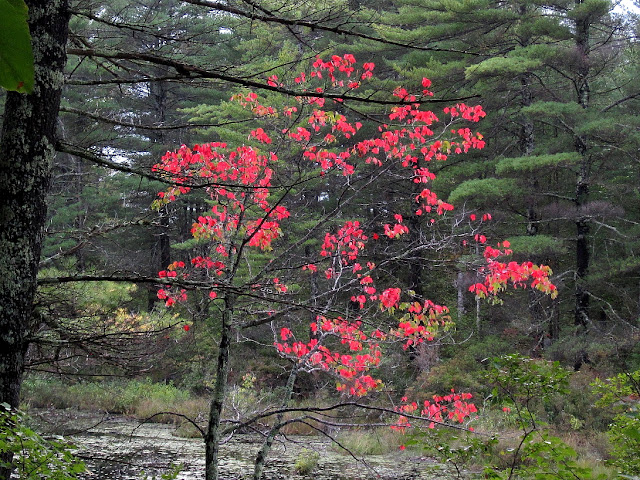 Posted by Scott Powell at 5:00 PM No comments:

It sure is dry all around the Lakes Region right now.  The drought isn't as severe here as farther south but still, everything is brown and parched, and the small streams feeding the lake have gone dry.

Lake Winnipesaukee is a foot and a half below full pool, and a fisherman told me Lake Massabesic in Manchester is four feet low and the boat ramps are closed.  Lake Wicwas has been very fortunate that - between good management of the dam and the assistance of the beavers - the lake has been high all summer, and as of yesterday is just one inch below full level.

The beaver have helped us in two ways.  First, all summer long they have been stuffing every manner of debris in the dam.  (Note all the vegetation they've added in the picture above.)

In addition to raising the water level until the town comes and removes the mess, they also plug up all the leaks that every dam has, further reducing the outflow from the lake (beavers are genetically programed to impede any running water they find).  The other contribution they've provided is a dam they created where Blake Brook enters Lake Wicwas (see August 21 post).  This has raised the water level behind the dam two or three feet, impounding a good reservoir of water that continues to feed the lake.  I expect we are also blessed with many springs that supply the lake as well, as it's hard to believe the small trickle of visible inflow would keep the lake full without other sources.

I was on duty for a morning session of Lake Hosting on Saturday and I went early to watch the sun rise from Crockett's Ledge.  It had the makings of a beautiful morning, with a full moon shining through a thin layer of fog to light the trail on the way up.  When I arrived the fog was low and the mountains were rising above.


But within minutes the fog thickened and rose 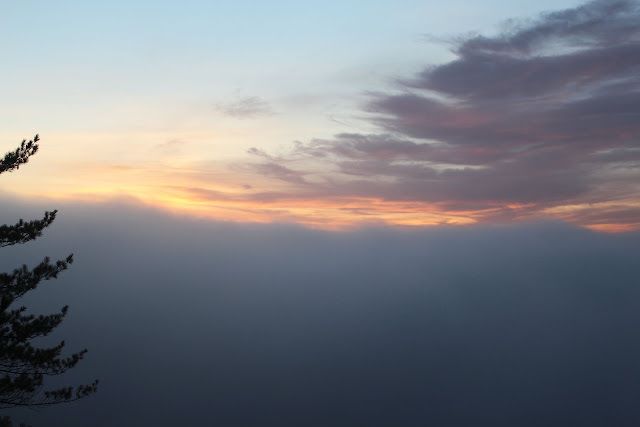 and soon obscured any view.

Still, it was calm and serene, with birds starting to sing, and there was a little early foliage to enjoy.

Back at the boat ramp the lake remained pretty much fog-bound.

But the sun to the east was working its magic.

By 7:30 it had cleared and unveiled a perfect, warm, sunny September day.

In the afternoon the goldenrod was radiant in the rich autumn sun, calling to a wide array of pollen-collecting insects to amass their reserves of pollen.


Nice to see them all sharing the bounty of the fall flowers.

Finally, on a late-afternoon walk I spotted the elusive Hermit Thrush deep in the forest, and very skittish.

This is a bird I hear often but rarely see, in keeping with it's name.  It is one of the last birds to migrate, but nonetheless, it will soon be off on its travels south, as autumn hints at its impending arrival to the lakes.

Posted by Scott Powell at 6:12 PM No comments:

This week I took a walk along the shores of Lake Wicwas with a couple of good friends, and it was remarkable how differently everyone sees the same world.  On a path I have traveled many times, they both noticed things I have passed right by.  An example:  this wonderfully intertwined tree:

Somehow it managed to bend over sideways, then back around and wrap itself right through the branches of another tree.  And there it is, right along a trail I walk regularly, and I never saw it.

Here's another:
A great rock formation that was aptly named "Baby Bear" by the person who discovered it.

Careful eyes (not mine) also caught a nice Wood Frog sitting well camouflaged in a small depression near the trail.

And how many times have I looked at the common pickerel weed growing in the lake and forgotten to appreciate just how beautiful it is.

Dragon flies are a ubiquitous sight throughout the summer - we all see them everywhere around the lake.  But to capture the special feel of these delicate insects, intertwined in a different manner, and well assimilated with the late summer foliage is something special.

Everyone is unique, everyone has their own eye to the world around us.  It is a joy to spend time with people and learn what they see, beauty that I might overlook.  Take a walk with someone you know and see what new things you find!  I look forward to future walks - or paddles - or snow shoe trips - with all of you!


Post Script:  For those of you following the loons on Wicwas this summer, our long-term pair is still on the lake - I got a glimpse of the bands on the female this week.  Our single loon is still here as well, but I haven't seen the second pair lately.

Posted by Scott Powell at 6:29 PM No comments:

Sometimes you don't have to go anywhere to witness nature's wonder.  Sometimes it comes and knocks on your door.

This week a brilliant Black and Yellow Garden Spider paid a visit, choosing to set up home on the deck, using Linda's Begonia for a foundation.

This is one of the largest and most recognizable of all the orb weaver spiders and is always stunning to see, especially in this haunt, high up with green trees and the blue lake in the background.

She picked a nice spot to spend the summer.  I say "she" because females make these webs - males only occasionally make a web, when they are young and use it for protection.  There are several theories for the purpose of the wide vertical band in the web - called a stabilimentum - including strengthening and stabilizing the web, and providing defense and camouflage.

Perhaps you heard the NHPR "Something Wild" report on yellow jackets recently - they are particularly aggressive this time of year, as their ground nests, fully stocked with larvae, are prime targets of bears and skunks in search of protein.   And they sure can be annoying on a late summer picnic as they land on your potato salad or try to sip your iced tea.  But thanks to this pretty spider, there is one fewer to bother us now.  One afternoon I noticed Mrs. Arachnid was in her usual position, hanging upside down in the center of her web, but there was something else with her, and she had her fangs embedded inside it, sucking out all the juices.

From this angle it was clear it was one of those pesky yellow jackets.

When she was done with it she carefully unwound it from the tomb she had used to secure it. 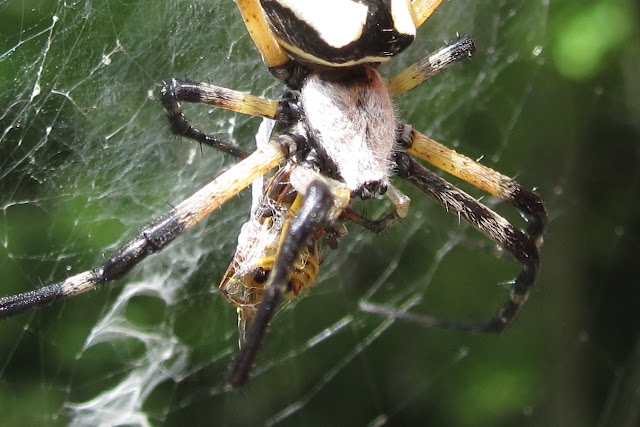 She rolled it around, unwrapping and recycling the silk to be used again. 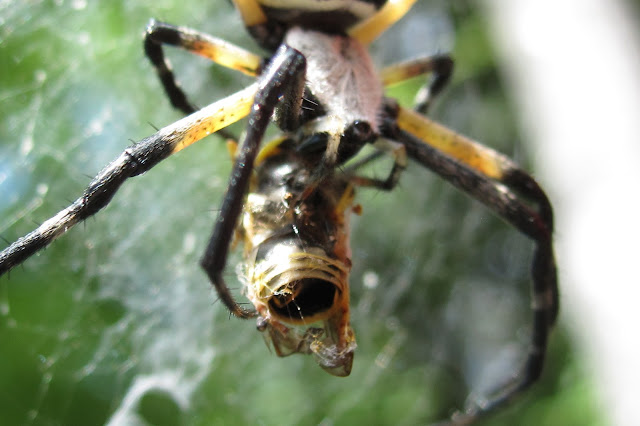 Her dexterity and deftness with her legs in handling her prey was amazing.
Fully desiccated and unwrapped, she released it from her web. 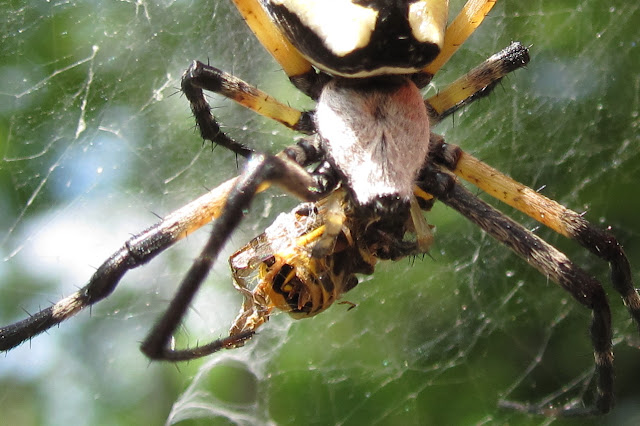 Most orb weavers consume their entire web every night, recovering their thread for a new web to built for the next day's trapping.

I thought I'd give her a little help with her food supply to ensure good egg production, so I caught a fly that had been buzzing around the house that afternoon and tossed it into her web.  I was amazed at how quickly she acted:  before I even realized what had happened, she had run over and secured that fly by wrapping it up in a new cocoon.  I could see six or more threads coming from her spinnerets that were still attached to the cocoon.  And those multiple spinnerets are used to produce at least seven different types of thread!  Some are formulated for strength, some for their sticky property, others designed for wrapping prey or forming an egg sac, and the spider somehow knows how to make the right mixture to use for each purpose. [Ref:  Encyclopaedia Britannica]

So next time a spider comes knocking on your door, feel free to show it the exit, but treat it kindly and it will repay the favor by catching its share of mosquitoes, flies, and maybe even a yellow jacket that will no longer be after your burger. 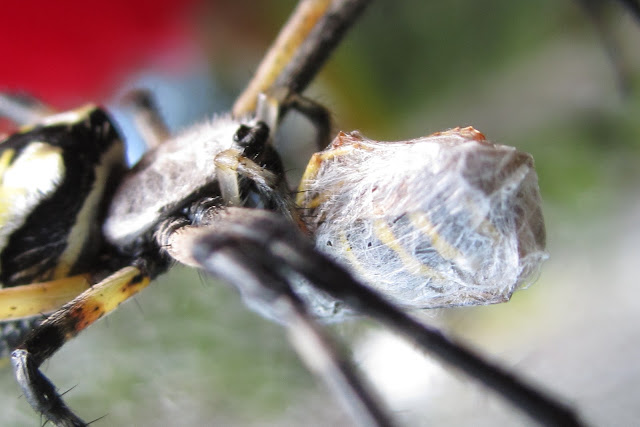 Posted by Scott Powell at 3:00 PM No comments: