Today was the calm before the storm - a beautiful, calm, peaceful day - the complete opposite of what Hurricane Irene will bring to Lake Wicwas tomorrow. 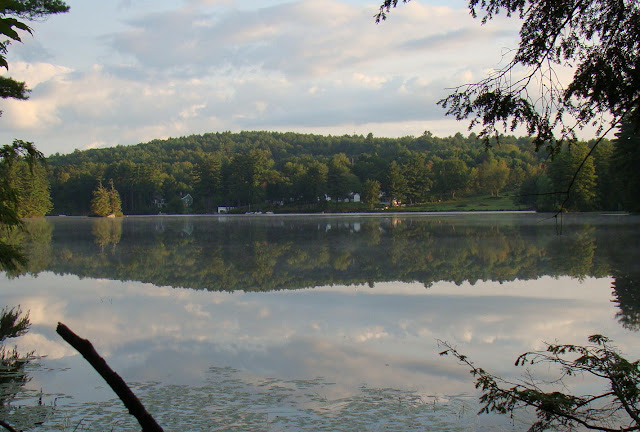 I caught a glimpse of the sun shining through the trees just after sunrise. 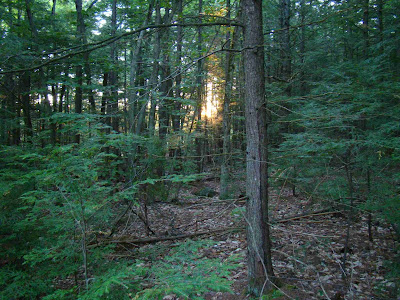 Someone has already started to lower the lake to provide a larger reservoir for flood control, and the lake is down about six inches.  It looks like that will be corrected soon enough....

The beech trees are having a good crop this year, as there are many nuts around the bases of the trees.  This is good news for the black bears, as beechnuts are one of their favorite foods.  Look at the trunks of the beech trees to see if there any claw marks where a bear has climbed up to collect the nuts right off the branches.  The first acorns have also started to fall. 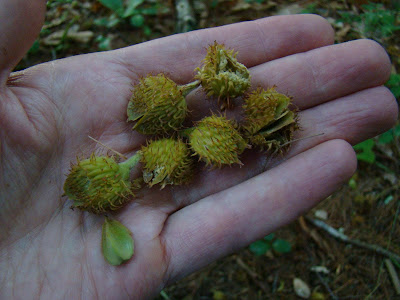 The foxes are also enjoying the summer harvest, as their diet has turned mostly vegetarian, giving the mice a chance to build up their population for the winter feeding season.  The fox scat is showing evidence of lots of seeds and berries. 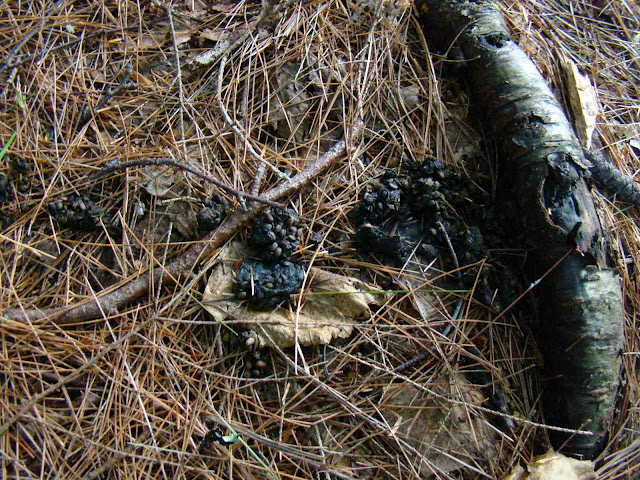 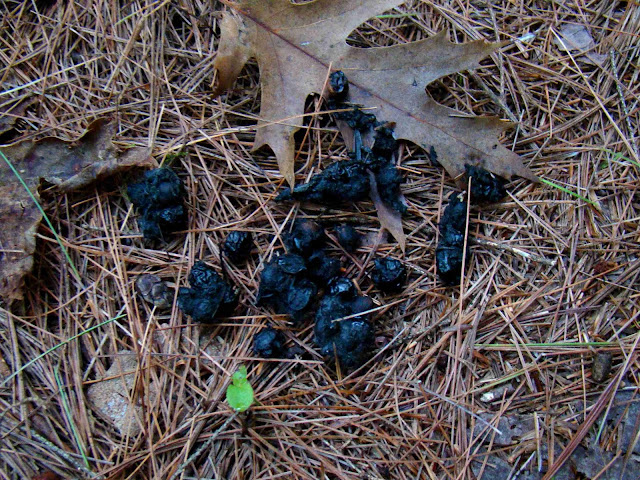 But some animal is still killing for its meals.  I found this collection of coarse gray fur on the ground;  it's not clear what animal it came from, or what the event was, but it looks like something met its demise at this spot. 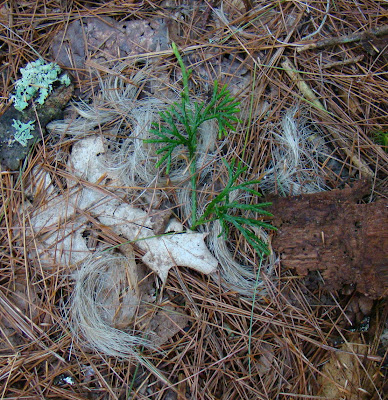 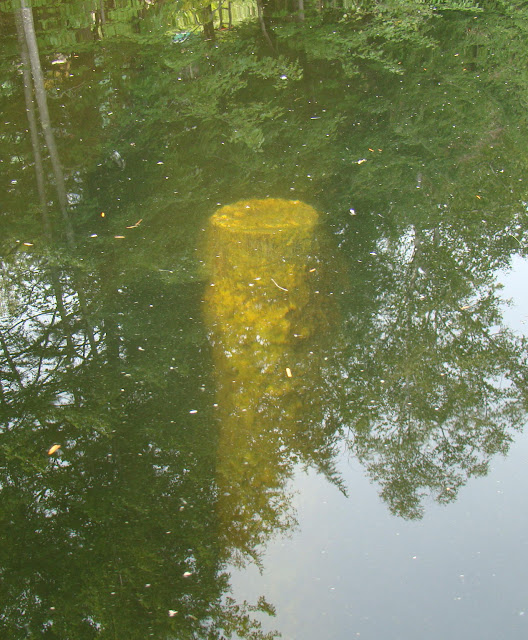 The water in Lake Wicwas remains very clear, although the surface was covered today with thousands of black flying insects.  The fish were having a feast this morning, but by afternoon the insects were all dead.  Kayaking today revealed many hazards to boat props, mostly near the shore: leftover logs lost during logging many years ago that are floating back up to the surface. Beware!

I also saw this very rare bird species at the south end of the lake. 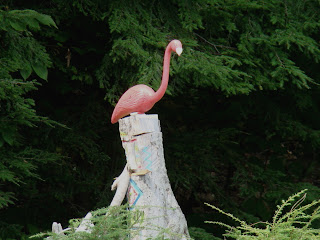 This weekend brought in some classic late-summer weather to Lake Wicwas, with foggy mornings, warm, humid afternoons, and even a late day thunderstorm.


This was after some heavy rains earlier in the week which brought five inches of rain, bringing the lake back up several inches above full level.  Rather nice for this late in the summer.

After not seeing many deer this summer, on one of these foggy mornings I came across a whole herd of them.  I walked right past where they must have bedded down over night without seeing them.  It wasn't until I stopped to look at something on the ground, and then started walking again, that three or four of them sprung up from the low growth in the field and bounded off into the woods back where I just came from.  It was just a flurry of brown rumps and white tails.  If I were a predator, I wouldn't have known what to chase.  And then 50 yards later, entering the woods on the other side of the field, another two or three took off up the hill in the other direction.  Finally, 20 minutes farther down the trail, I spooked another off into the thick woods - who knows how many other animals watched me walk by and never revealed themselves.

On the other end of the animal spectrum, there were lots of frogs enjoying the humid weather.  One pickerel frog has been enteraining Linda all summer in one of her gardens. 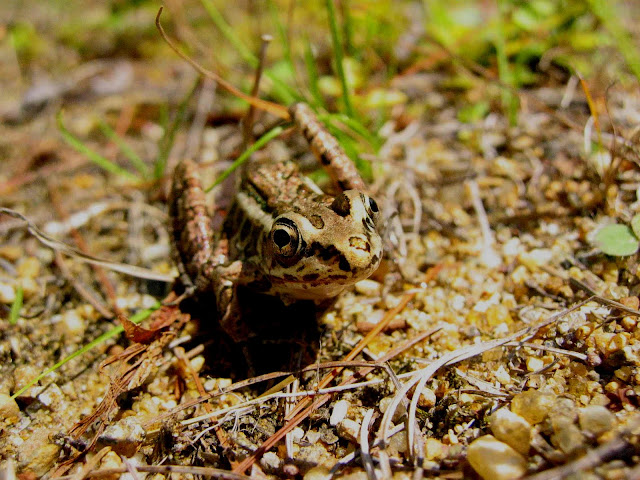 Plus I found a green frog sitting half submerged in a small pond.  The green frog has really bright green spot on its nose - this was my first chance to get a picture of one of these amphibians. 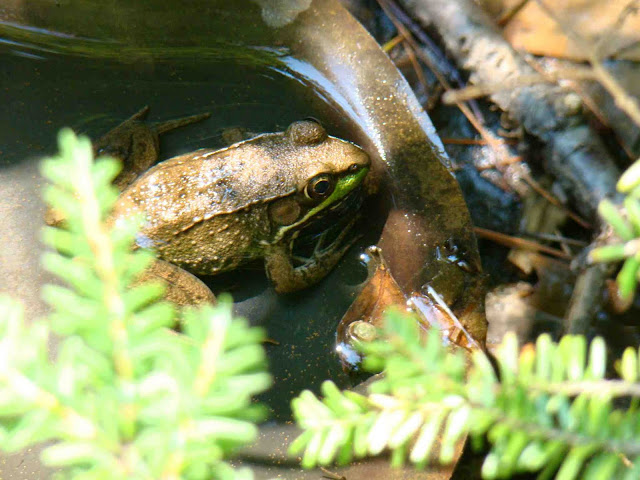 Here are a few more fungi to add to last week's collection, including one of my favorites, the Indian Pipe, which popped up this week. 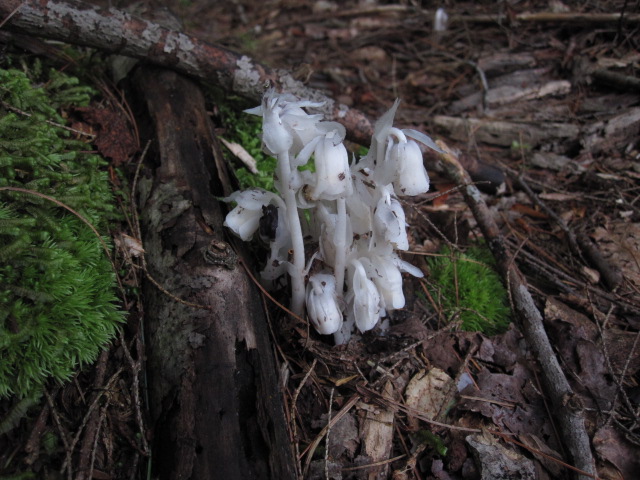 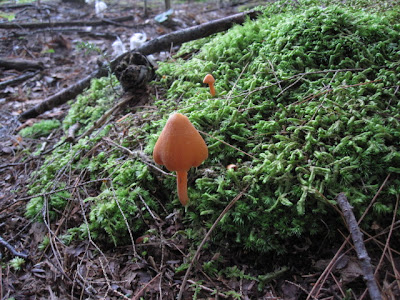 And here was a cute yellow caterpillar to brighten up the day: 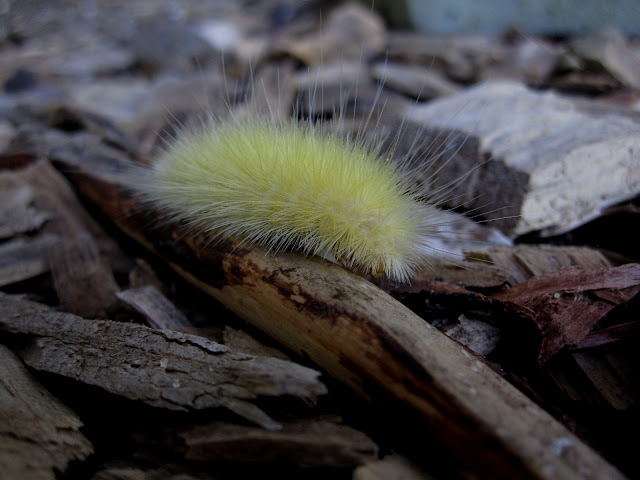 I also have started to see more ominous signs of late August, and what comes thereafter.  There are only a couple of stray branches on weak trees, but it's a sign.... 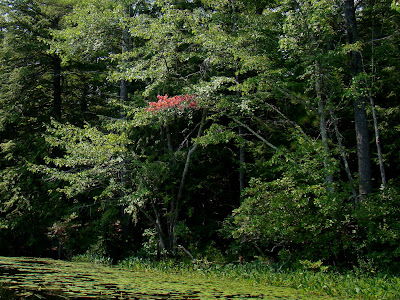 And the humidity of August continues to bring intense sunsets! 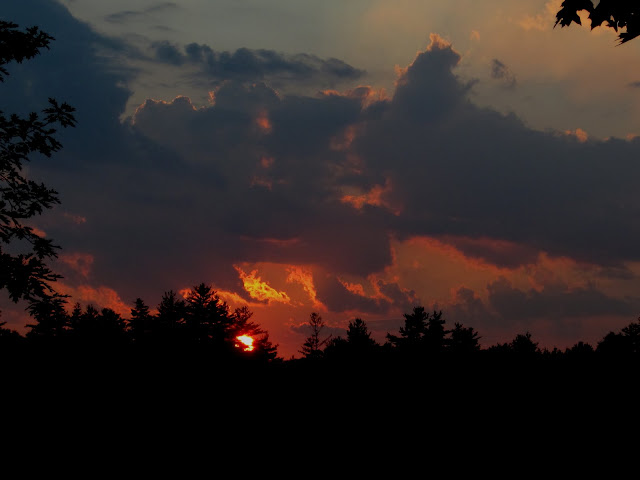 Posted by Scott Powell at 7:41 PM No comments:

We had several good opportunities to observe the loons this weekend, as they made the rounds each morning.  The loon chick has just about become a juvenile.  It has molted almost all of its baby fuzz, and has taken on some of the markings of an adult, although with much lighter shading on the darker markings.

And it is behaving a lot like a teenage too.  It seems perfectly happy to lounge on the lake surface while mom or dad goes off to work, diving again and again for food, just watching until dinner is brought to the table (I hope my kids aren't reading this  ; ).  Although, I do have to say, today, it did quite bit of diving as well, though I never saw it come up with a fish.  And like a teenager, it is getting almost as large as its parents - when you see it alone on the surface at a distance, its hard to tell whether its an adult or not.

We did see the adult come up from one dive with a good size perch.  It spent a few minutes playing with it on the surface, dropping, and recapturing it before swallowing it down.  Maybe it doesn't like the feel of a live, flapping fish down in its stomach!  The juvenile seemed to know it wasn't for him/her, as it never even approached the adult when it came up with this one. 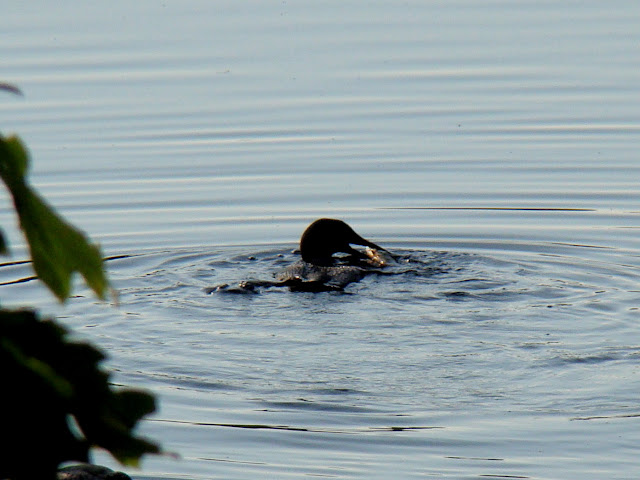 We did not see the entire family together at all this weekend - there was always only one adult with the juvenile, but we have no idea if it's always the same parent, or whether they are sharing responsibilities.

Posted by Scott Powell at 5:52 PM No comments:

Email ThisBlogThis!Share to TwitterShare to FacebookShare to Pinterest
Labels: Loon

There was a large flock of amphibious mammals out on Lake Wicwas this weekend.  They seemed to congregate in the late afternoon at the south end of the lake, and then travel in a somewhat fragmented group up the lake and around Bryant Island, and then regroup on the eastern shore of the lake.  Yes, the big event this weekend on Lake Wicwas was the 2nd annual paddle regatta!  It was another fabulous event, with lots of people from all around Lake Wicwas participating.  It again started near the boat launch, with kayaks, canoes, and boats of various sizes and shapes paddling around Bryant Island, and returning to our gracious  hosts on the east shore of the lake.  As there was last year, we enjoyed great food and drink, interesting company, and learned lots about what is happening around the lake.  Many thanks go to those who arranged and hosted the event! 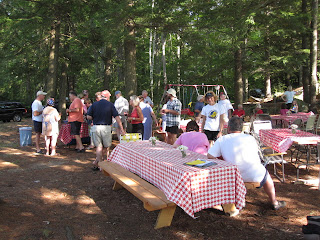 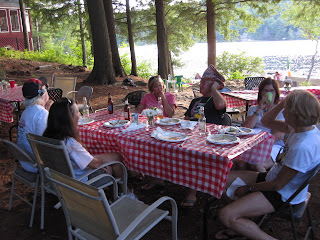 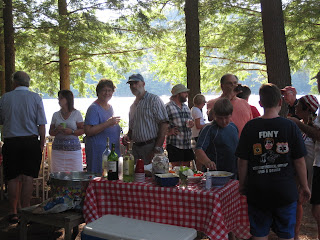 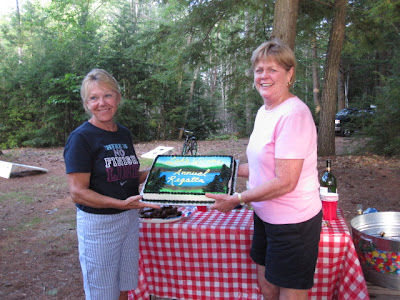 There were multiple generations of families, from  young to young-at-heart, and lots of fun.  We even invited the loon family, but they decided to keep to themselves.

Somewhat less known, there was also a wonderful wedding celebration on the lake this weekend, with a fantastic new couple, and friends and family from as far away as Virginia.  The weather for both events was perfect, and eveyone had a great time.

As for quieter things going on around the lake, the mushrooms have the action right now.  Here's just a sample of what you'll find around the lake at the moment.  The speed at which these grow is amazing - they can be just poking out of the ground in then morning, and by afternoon they can be 4 inches high.  That is, of course, if the chipmunks, squirrels, and slugs don't eat them first. 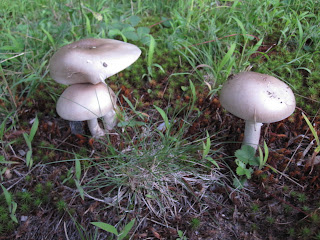 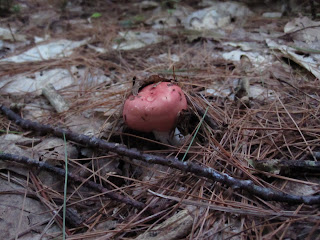 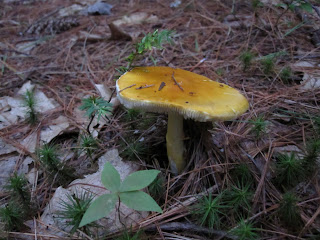 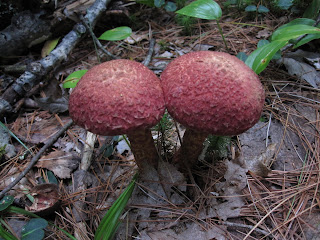 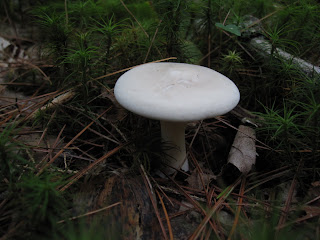 Do you remember the hobblebush viburnum blossoms from May 14th?
Here's what those blossoms have turned into:
Oh - and there were also two fishing tournaments on the lake this weekend;  a large one one on Saturday, and a somewhat smaller one on Sunday.  Good thing Chuck was busy this weekend, so there were some fish left for them!
Posted by Scott Powell at 8:31 PM No comments:

There was a lot of activity on Lake Wicwas this weekend - this time people activity.  I'm sure it was due to everyone wanting to be here for the Lake Wicwas Association annual meeting!  I was very disapointed to miss it, as I heard Jeff Schloss was an excellent speaker with lots of good ideas about how to design waterfront property to help protect the lake's water quality.   But Dustin and I were up at Franconia Notch participating in the Top Notch Triathlon.  You can't pick dates for triathlons, and we put in too much training to miss it!

After the mosquitoes were getting rather scarce with the hot dry weather lately, they have made a comeback this week due to the rain.  But it was actually nice to have a little break from all the heat.

As our new loon grows bigger, the family is getting more comfortable swimming around the lake, and is much more visible now.  It also appears more vulnerable to powerboats, so being attentive is important! 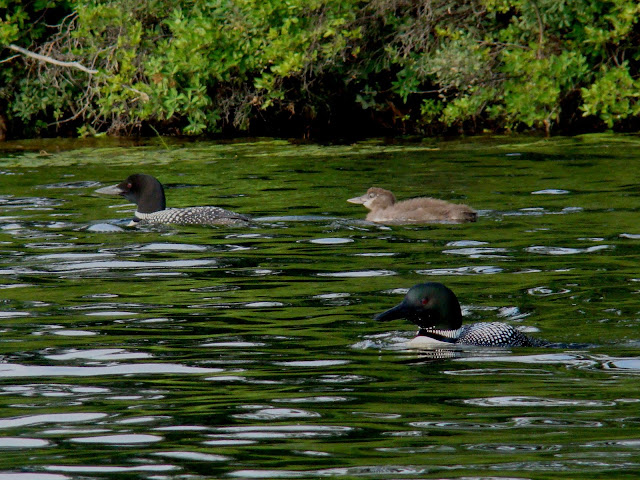 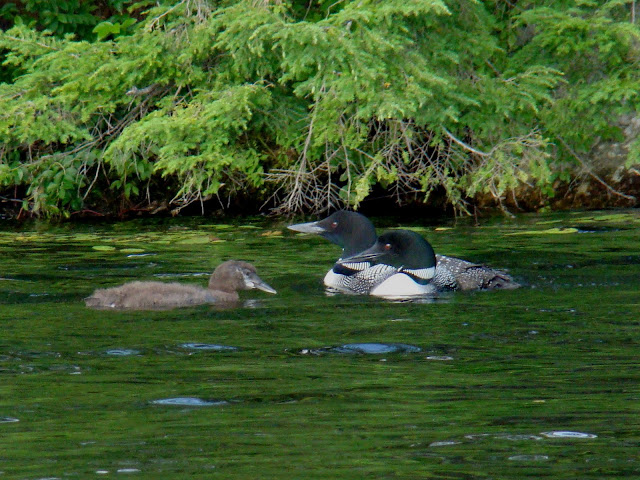 They still tend to keep one adult apart from the other parent and the chick so it can create a diversion when needed.  But when the distant parent finds a small fish, junior makes a fast beeline across the open water to it to get its meal.  So, although the chick is diving now, it's still getting help from its parents. 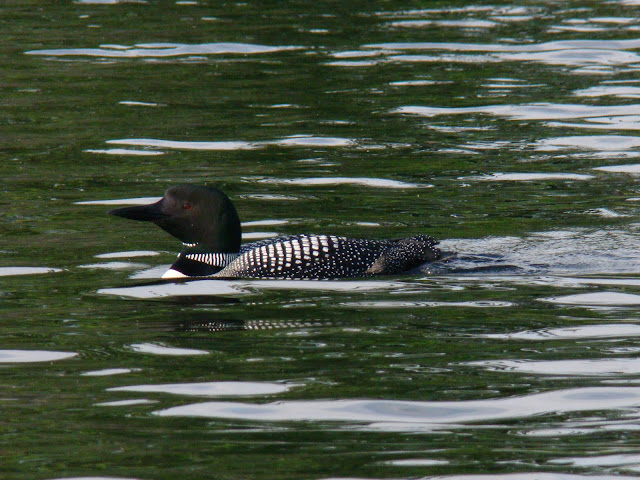 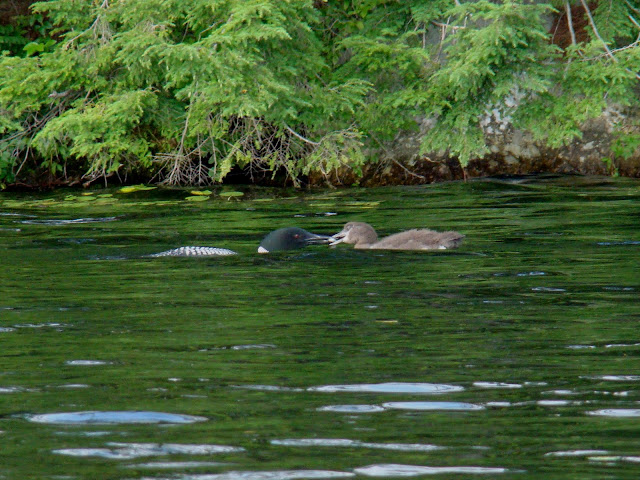 There is also another large bird that has taken up residence on the lake - an osprey!  I've seen it a couple of times this week, although unless I can find it from the water, I won't be able to get a good picture.  Both times I've only seen it because it gave itself away.  As I walked near the lake it gave out a very clear, distinguishing call - click this link to hear it.  Following the sound I easily found it, but couldn't get a decent picture:  osprey perch on a branch out over the water, waiting for an unsuspecting fish to swim by, at which point the bird dives right into the lake to catch it.  If you hear a giant crash into the water in the middle of a summer day, that's probably what it is!  (Someone sent me this link showing an osprey doing its thing - the first scene is the same way an eagle takes a fish, but the others show how only the osprey dives right into the water - truly amazing pictures!) 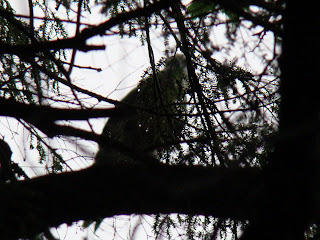 By the way, blueberry season is still in play, but it's nearing the end.  Get 'em now before they're gone for another long eleven months.
Posted by Scott Powell at 9:35 PM 2 comments: