With all the cold weather, there hasn't been much activity around Lake Wicwas this week, including myself!  I did get in a ski today - I saw a few other ski tracks, filled in with the blowing snow from last light, and few fox tracks in the woods where it was a little more sheltered.  There was also evidence of lots of  mouse activity, running back and forth from spot to spot, probably carrying food home to its nest.  At least it shows there is still plenty of food around for the foxes and fisher cats.

Since I don't have any pictures to add from Lake Wicwas, I thought I'd post some incredible photographs taken by a friend from way back.  Those who have known me a long time will remember Lindsey Brown from our Concord, Mass days.  Lindsey is an accomplished wildlife photographer who has the skills to capture the most spectacular pictures.  Recently he has been along the New England seacoast observing birds of prey, and he has photographed some of the most beautiful Snowy Owls you'll ever see.

The Snowy Owl is mostly a native of Canada and the arctic, but in winter they will travel to the northern United States in search of food.  The Snowy is not the largest in size, but it is the most massive of our owls due to the weight of the thick feathers that protect it from the arctic temperatures.  They even have feathers to keep their legs and feet warm.

(We think it's cold here!  Maybe that's why they are here now, just trying to find some "warm" weather.)

The Snowy Owl is diurnal, unlike most owls which hunt at night.  It prefers wide open country, which is why they are commonly found along the shore, but they also will hunt at farms and large fields.  They hunt from the ground, sitting at a location with good sight lines, and flying, sometimes running, to capture their prey. 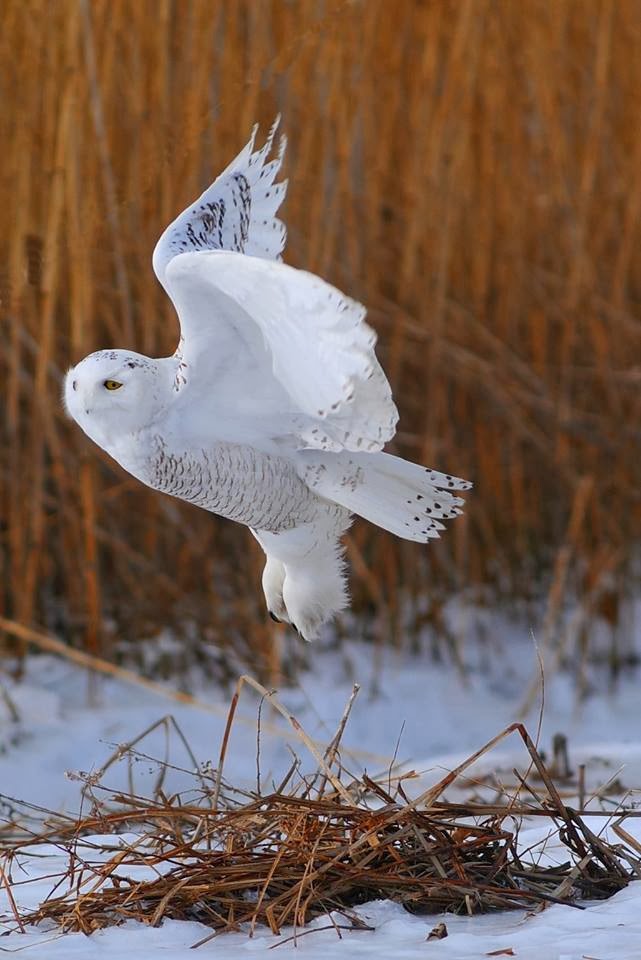 Their preferred food source is lemmings, of which a single animal may consume 1600 in one year.  Their population tends to fluctuate along with the Lemming population.  Along the New England coast, their diet may change to seabirds as well as mice, squirrels, and other small animals.

If anyone has ever seen one around the Lakes Region, I'd be interested to hear about it.

Lindsey - thank you for sharing!

Posted by Scott Powell at 4:00 PM No comments:

The most tantalizing aspect of using my trail camera is the mystery of what I might find when I retrieve it and down-load a set of new images.  Most of the time I haven't capture anything extraordinary, but I usually get a least one or two interesting pictures - and I always learn something about the animal life, even if it's just that they aren't active, at least in my chosen location.

Knowing we would have warm weather and a full moon, I set my camera out for a few days last week to see who was in the neighborhood. As is often the case, the Gray Fox came by a couple of times, once on the 13th and once on the 15th, both times traveling in the same direction.

I'm always excited to see this magnificent animal in the area, with its thick winter coat and beautiful colors.

But then I moved onto the next image and beheld one of the greatest shots I've ever gotten:

A good-size Fisher Cat carrying a large Gray Squirrel home for breakfast!  A few weeks ago (see December 22 post) I followed Fisher tracks around Lake Wicwas, and I knew one was in the local area because I had seen its scat.  But I have never got a picture of one, probably because they take such varied paths from tree to tree in their search for food.  My guess is that after getting such a large meal, this one was happy to take the shortest route back to its den to either eat or store its bounty for later.

The picture was taken at 6:45 am, before sunrise when it is still quite dark;  I don't see squirrels out this early, so the fisher had probably found the squirrel's nest in one of its trips up an oak tree.  (This time of year it is pretty easy to see the ball of leaves that form a gray squirrel's nest high up in an oak tree.)  At any rate, there will be one less squirrel under the bird feeder this week.

We had a beautiful, light snowfall on Saturday night, which greatly enhanced the scenery around Lake Wicwas - it was getting a little drab after the recent thaw. 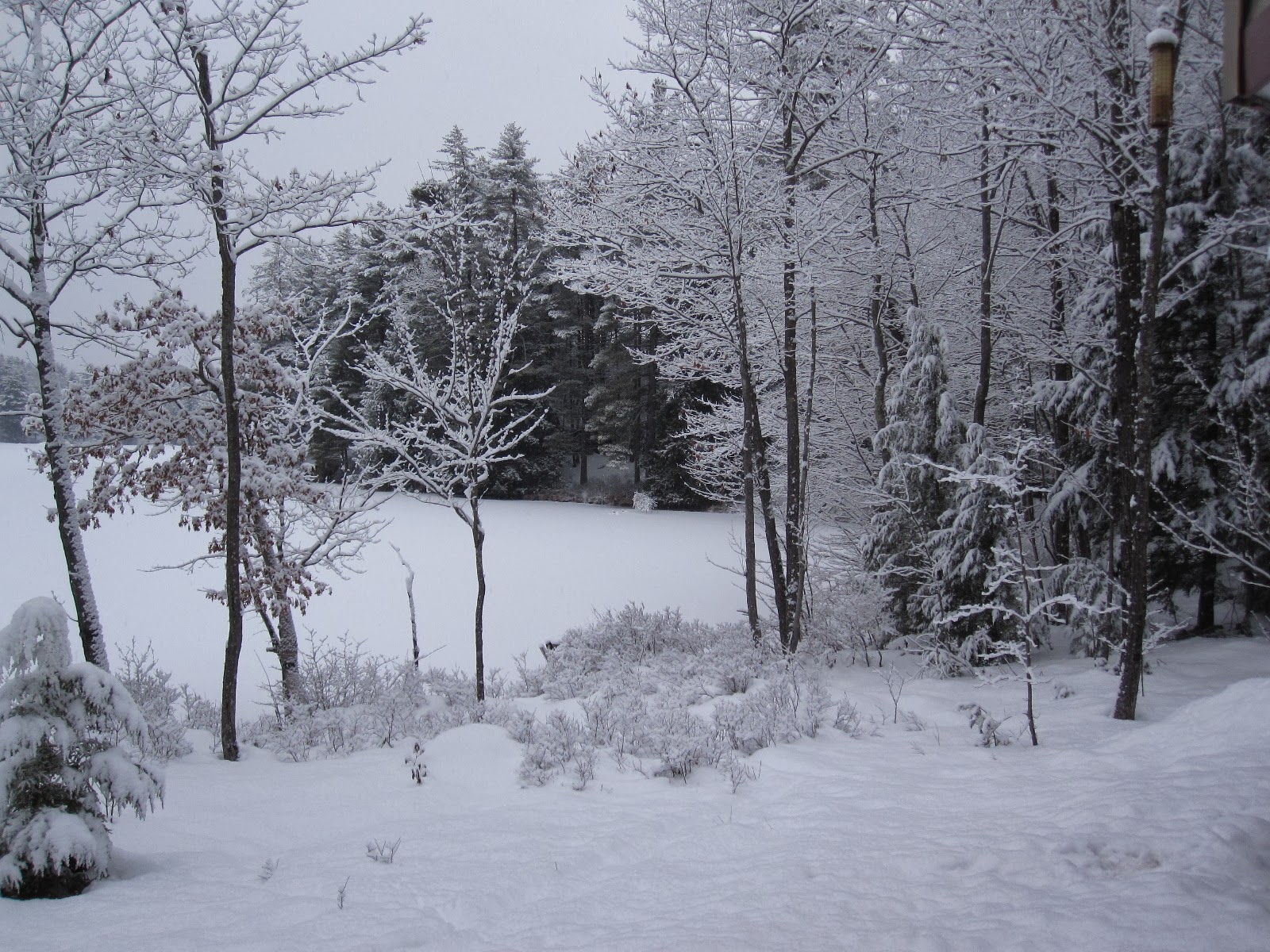 And this morning, the squirrels were back searching for food under the new snow.  (Though I only saw one gray squirrel!)  With a layer of crusty snow and ice on the bird feeder baffle, one clever red squirrel found a way to climb up and mount an attack on the feeders. 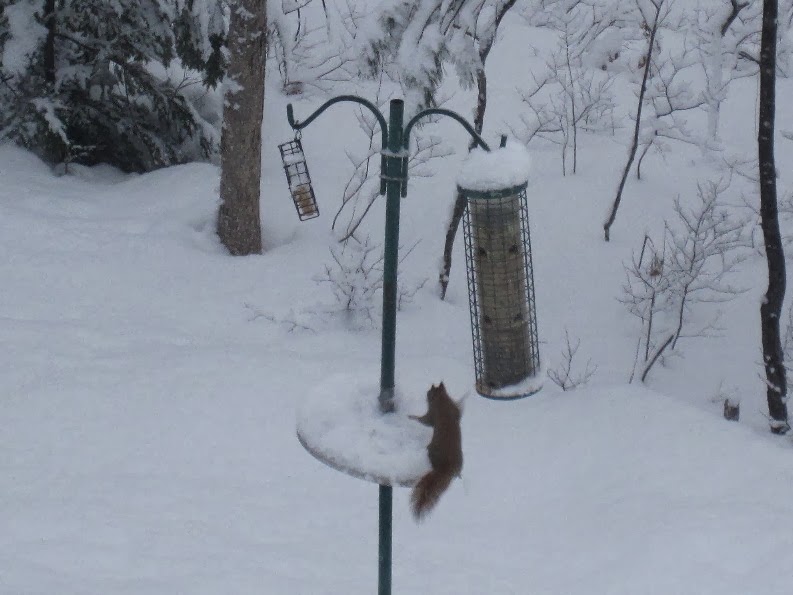 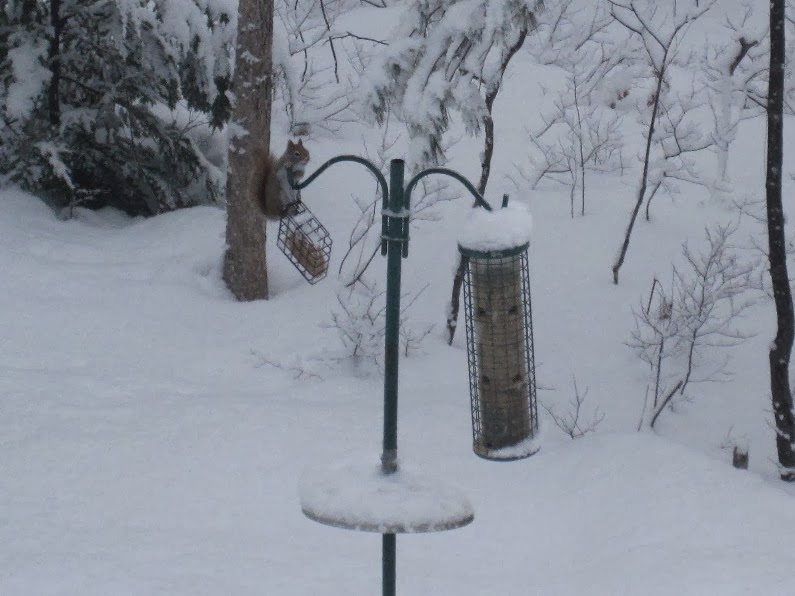 Linda enjoyed the ensuing display of creativity and acrobatic ability. 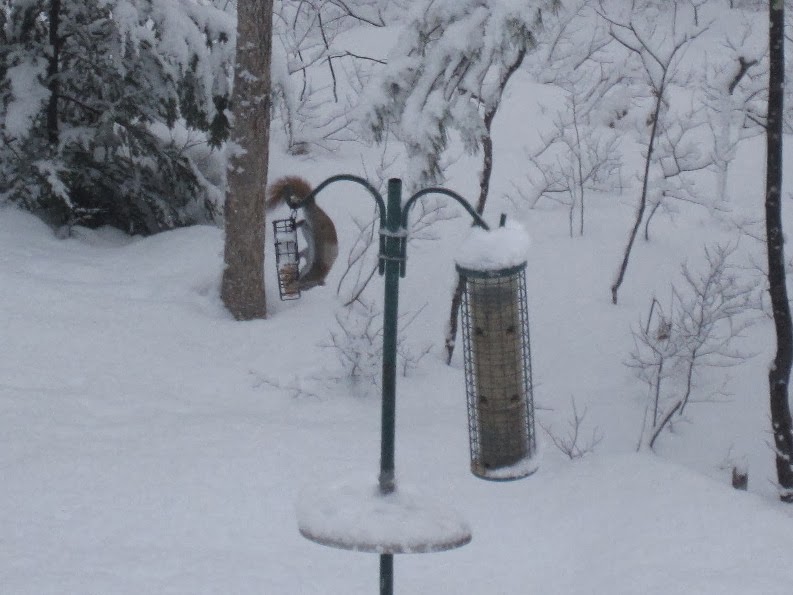 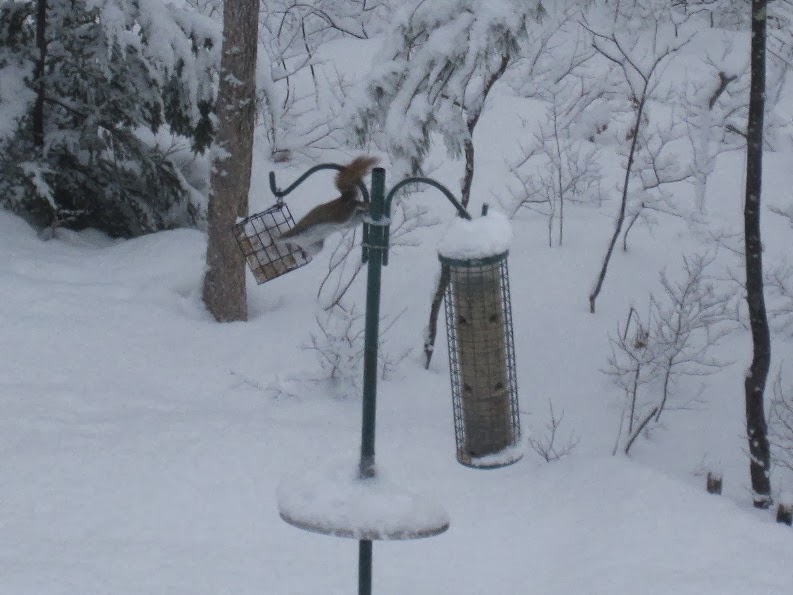 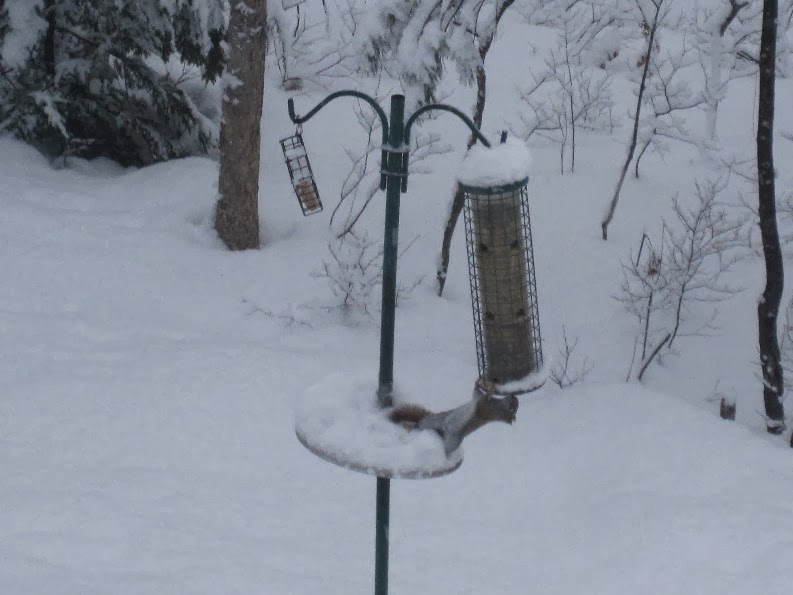 You have to appreciate their drive for sustenance!

I hope all the animals managed to get a good supply of fat and protein to store up, as the weather is now forecast to return to a prolonged stretch of deep freeze!  We'll see if it will surpass the last one.... 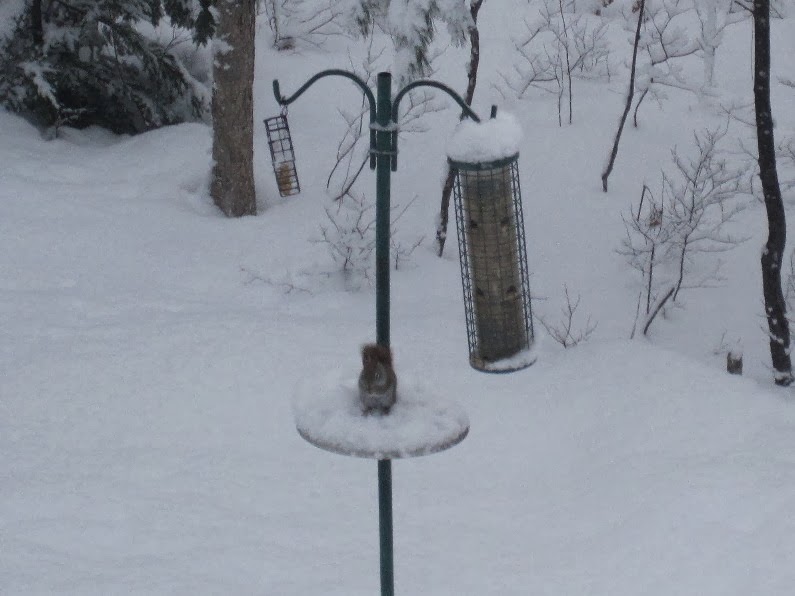 The polar vortex retreated back to the north pole, allowing a stubborn temperature inversion to take hold which gave Lake Wicwas over 24 hours of freezing rain.  While the temperatures were well above freezing above 1500 feet in elevation, along the Merrimack River valley the temperature was stuck right at the freezing point.  The trees received only a thin layer of ice, 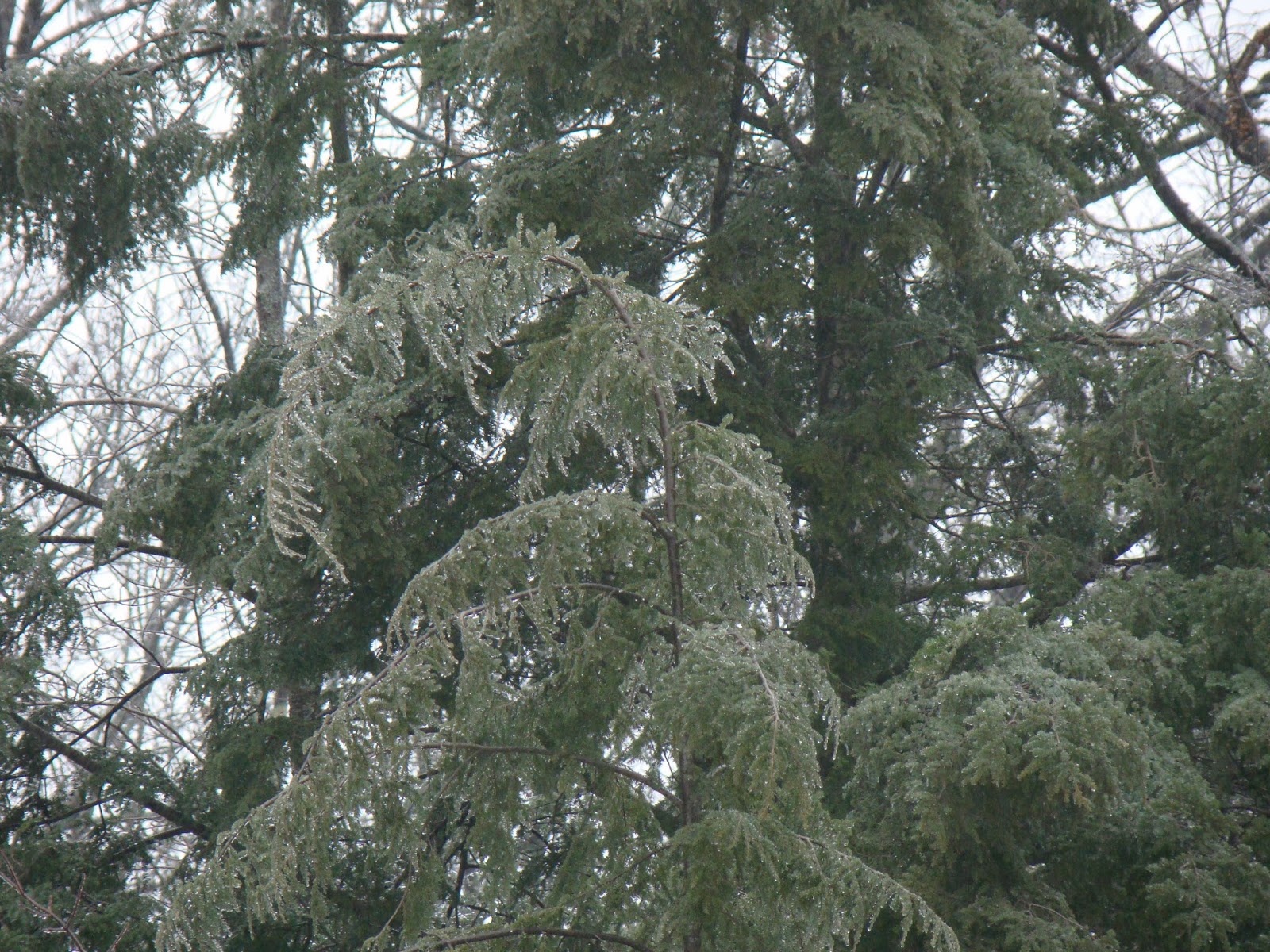 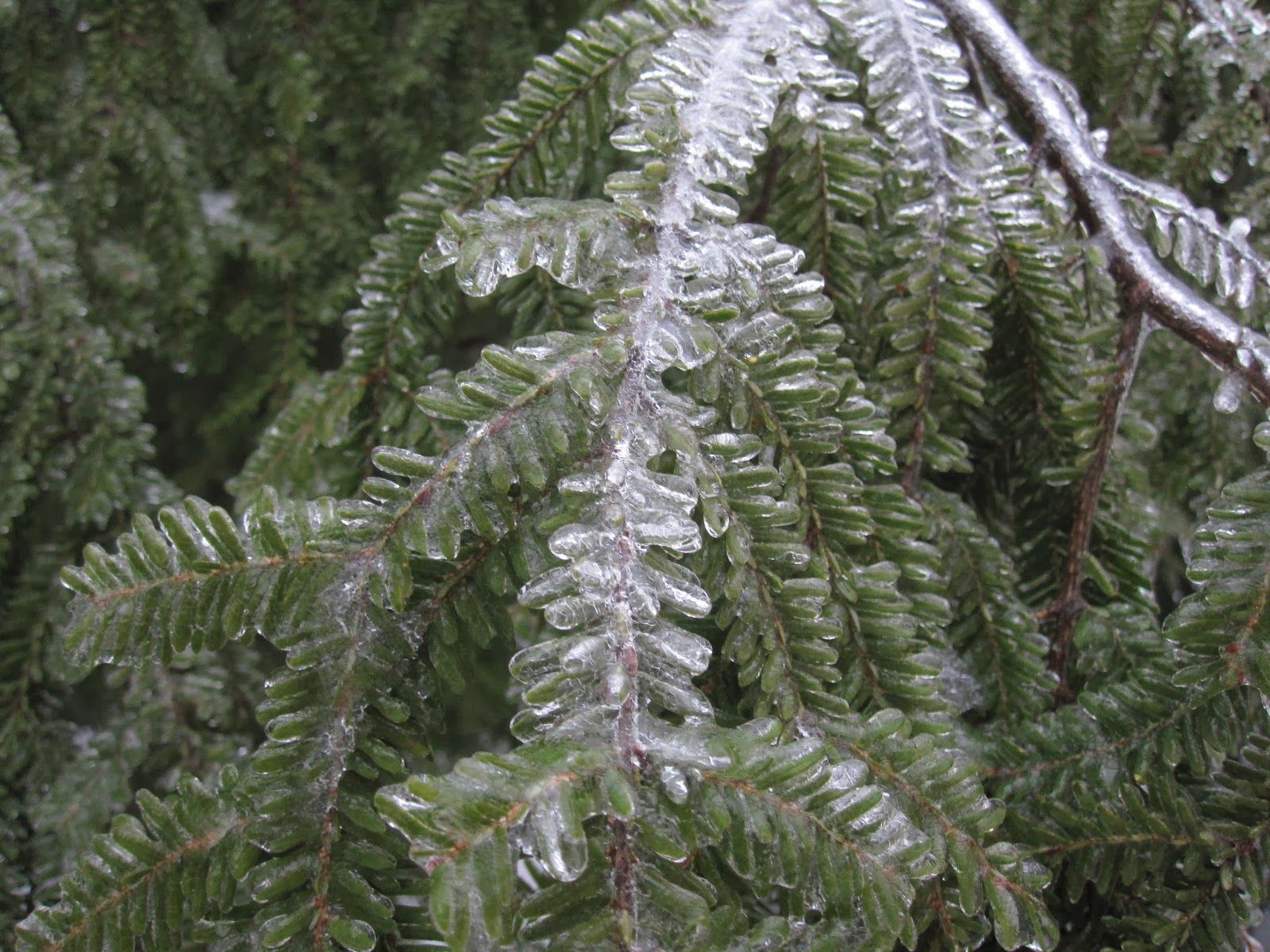 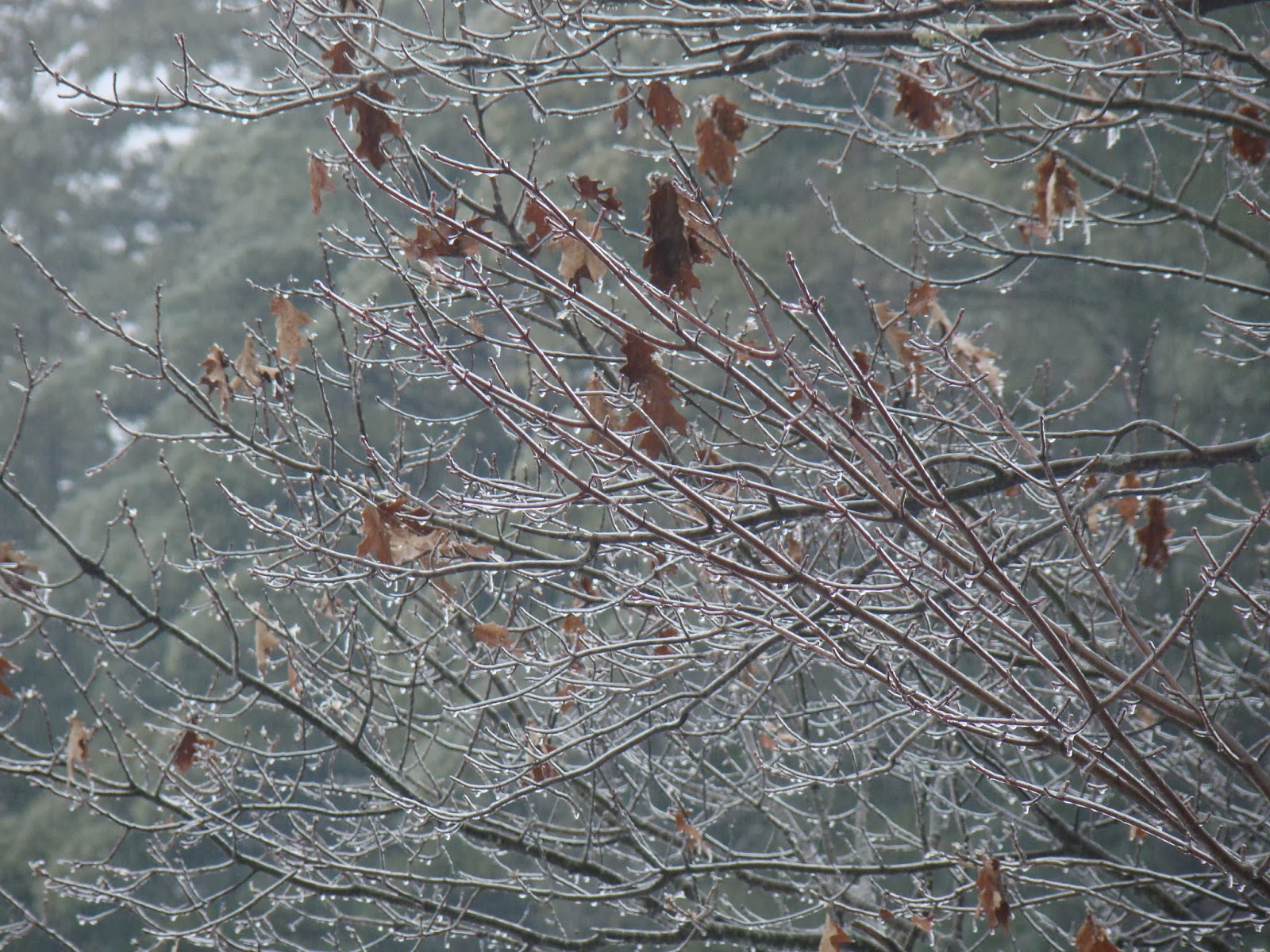 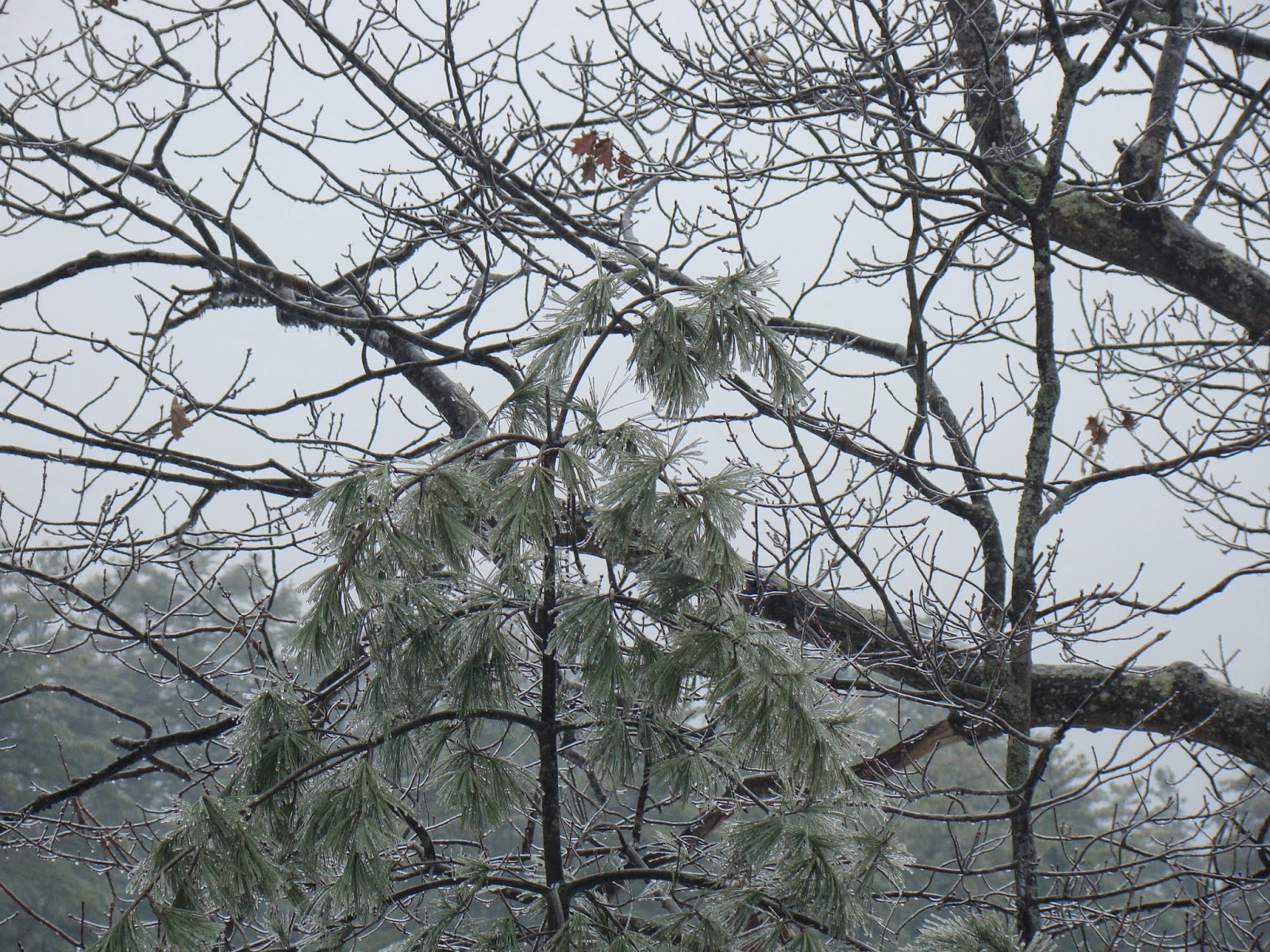 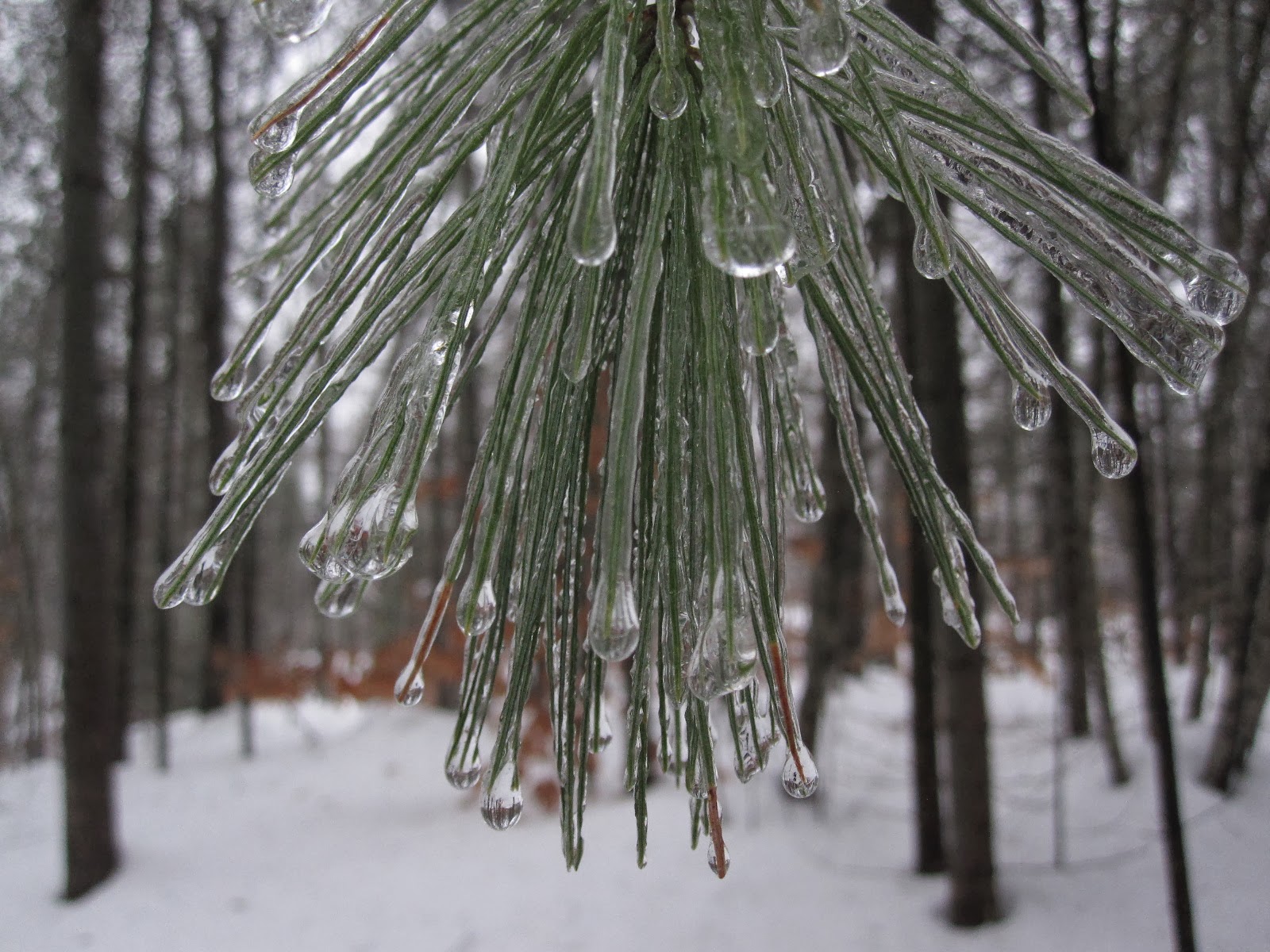 but the long cold-soak we experienced allowed an impenetrable (and impassible) sheath to form on the ground. 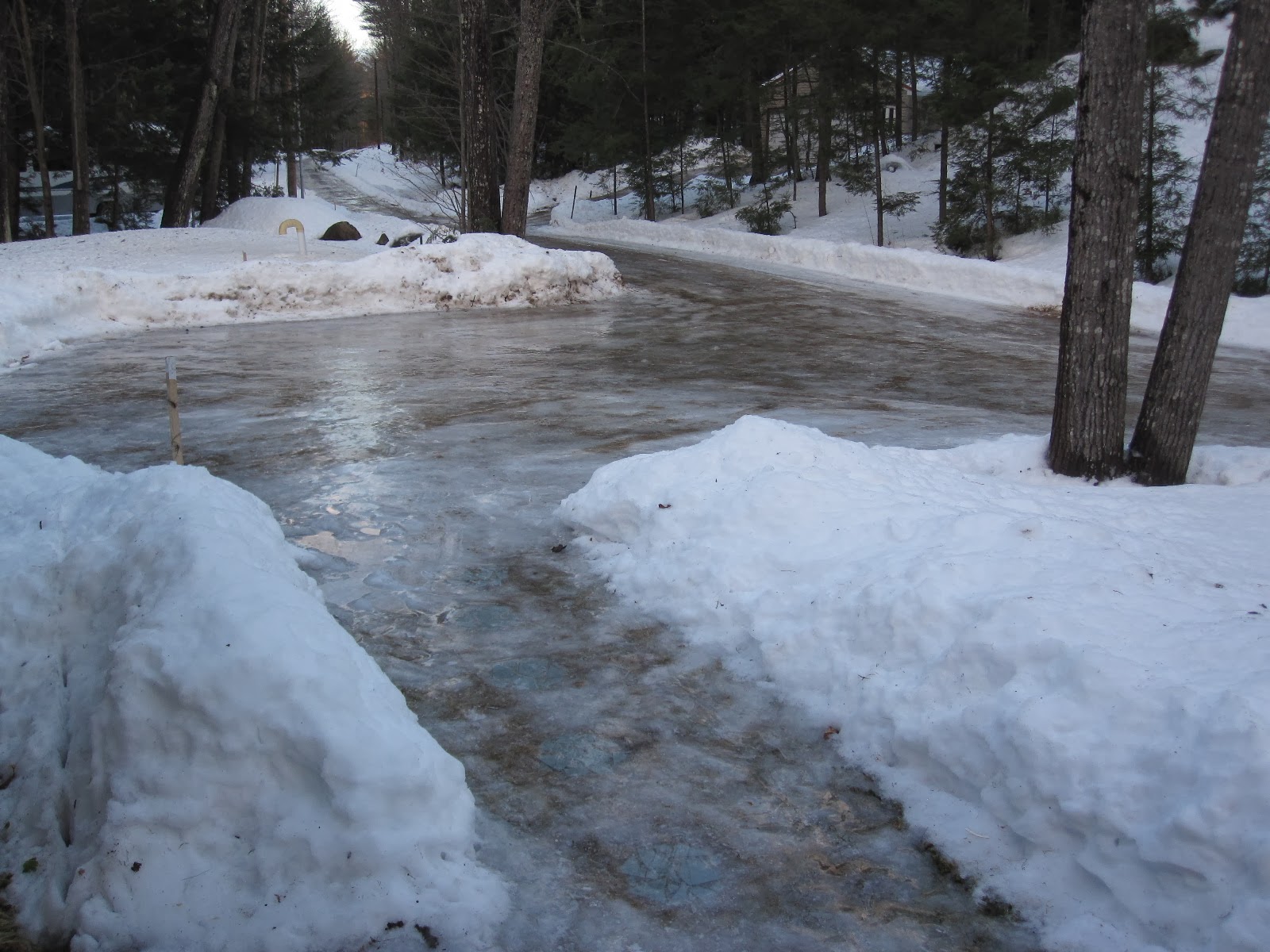 Any surfaces not treated with sand or salt had nearly an inch of beautifully clear ice!

The snow-pack is thick enough that it easily withstood the rain except on the lake, which became mostly saturated.  This afternoon the temperature rose sufficiently to soften the snow up enough to go for a ski, but there was so much debris that came down from the ice that it was more of a maintenance project than a ski event. 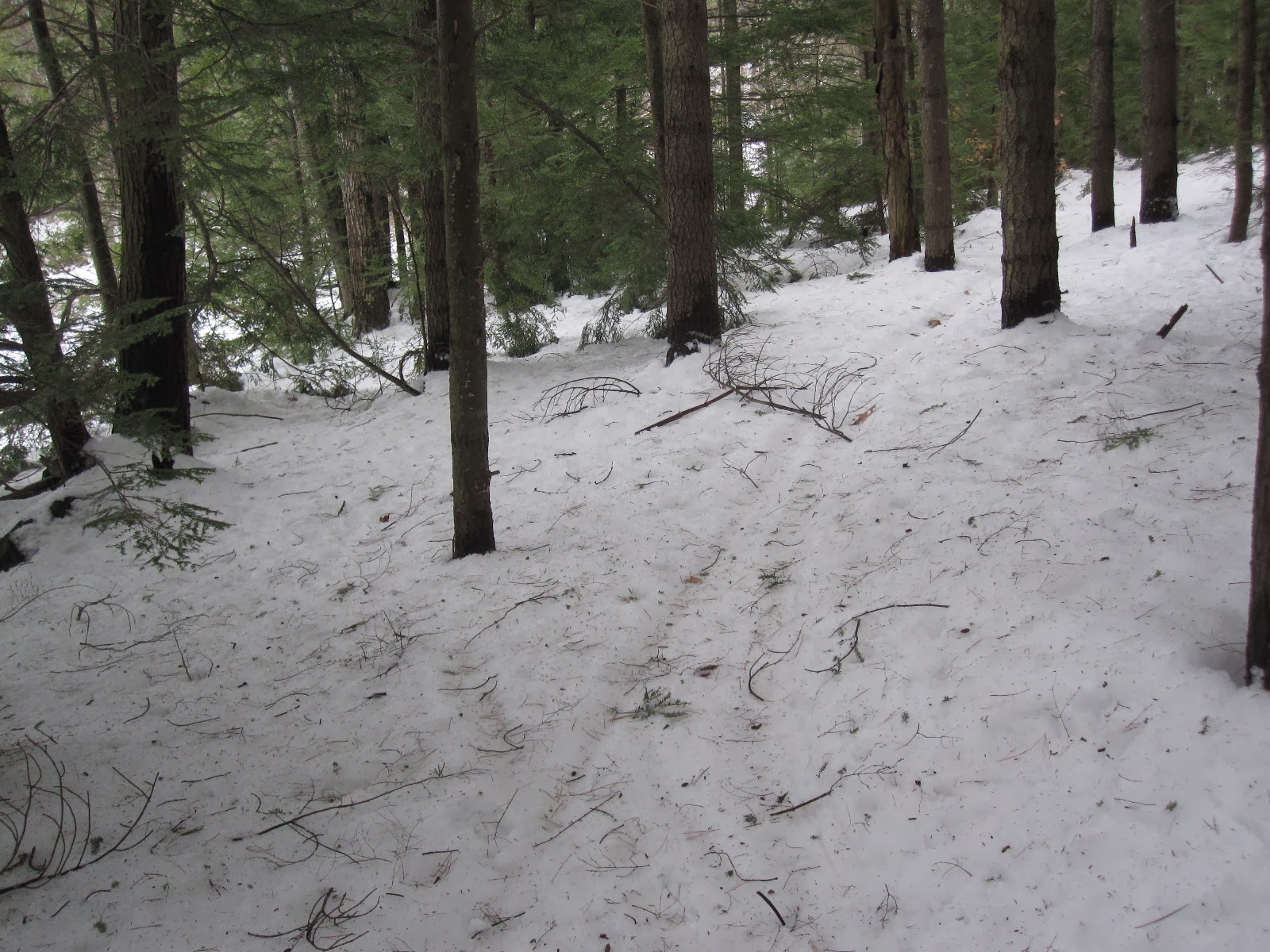 The water level in the lake rose a few inches from the rain, and the outlet stream is running strongly.  A few openings were created along the shoreline from the rain as well. 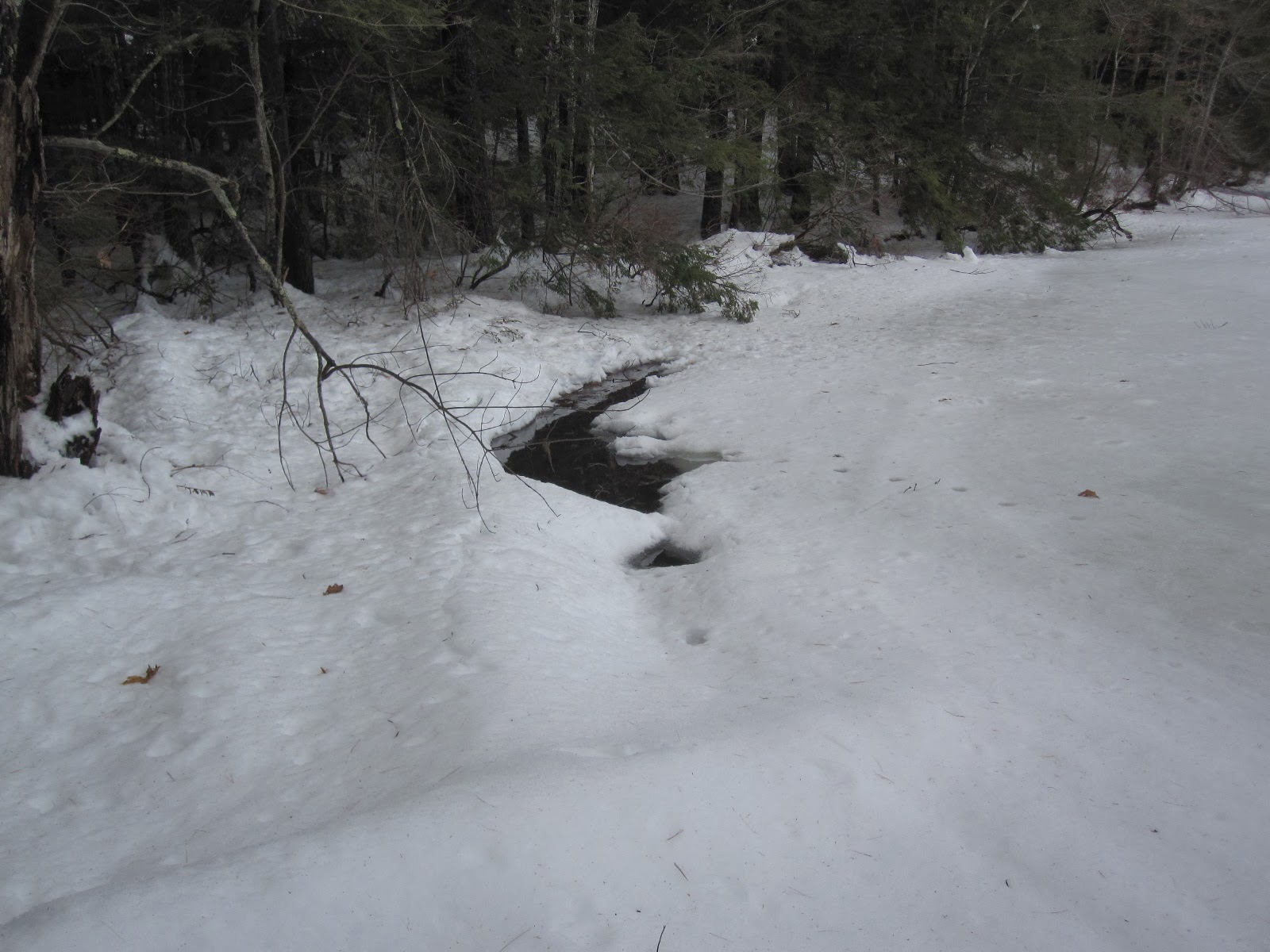 I saw no animal signs today other than an old set of tracks from a fox that sought out the open water for a drink. 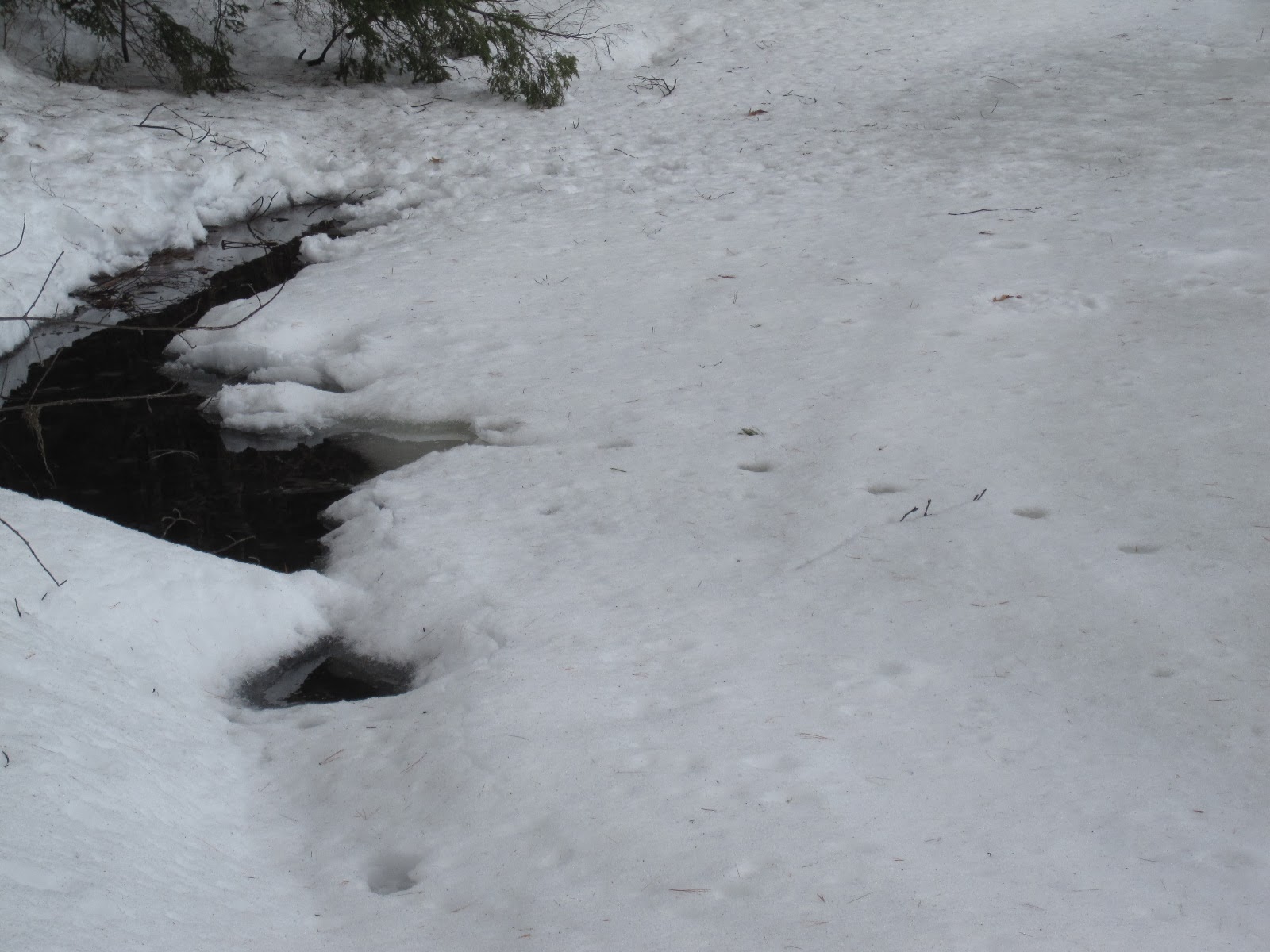 A little cold weather now and maybe we will get some skating on Lake Wicwas this year. 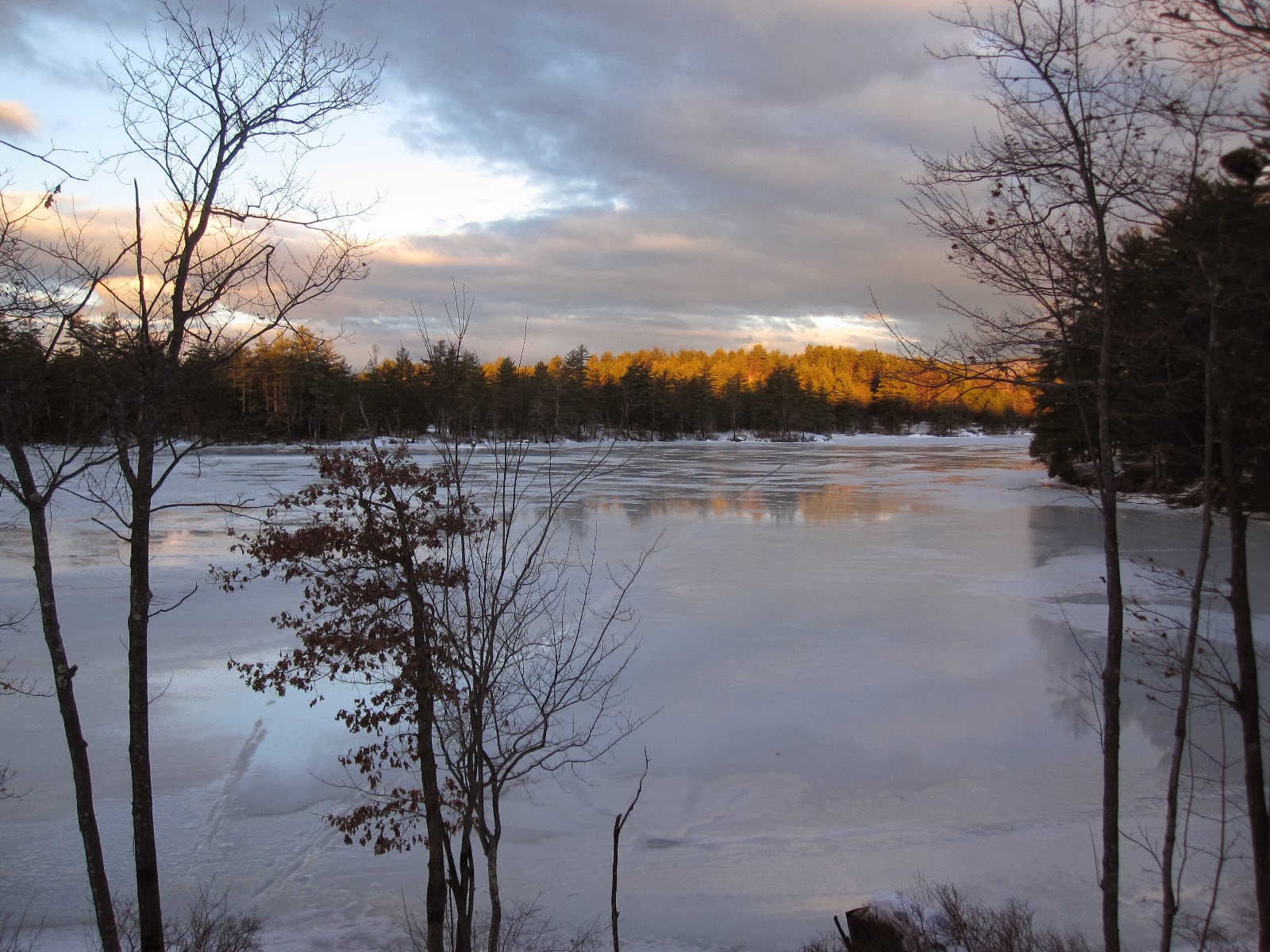 Posted by Scott Powell at 3:25 PM No comments:

Sorry to talk about the weather, but that's about all that happened around Lake Wicwas this week.

Yesterday the temperature dropped to 17 degrees below zero, the coldest we've seen here since 2009.  The low temps have been at or below zero for six days now, but at least we have haven't had a lot of wind to go with it.  An uncommon snow storm event at these temperatures brought us 10 or 12 inches of snow on Friday - incredibly light and fluffy snow, four times less dense than our typical snow according to one report.  That means the amount of precipitation that gave us 12 inches of snow would usually produce only 3 inches.  If you could brave the cold, it made for some awesome skiing - almost like being out west (almost).

It was so light and deep that the cross country skis tunneled down far enough that the ski-tips didn't even disturb the surface of the snow.  But it sure fashioned smooth skiing with some beautiful sights to behold. 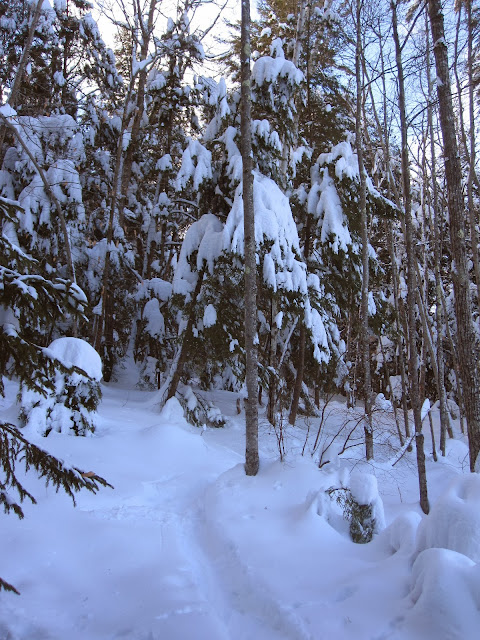 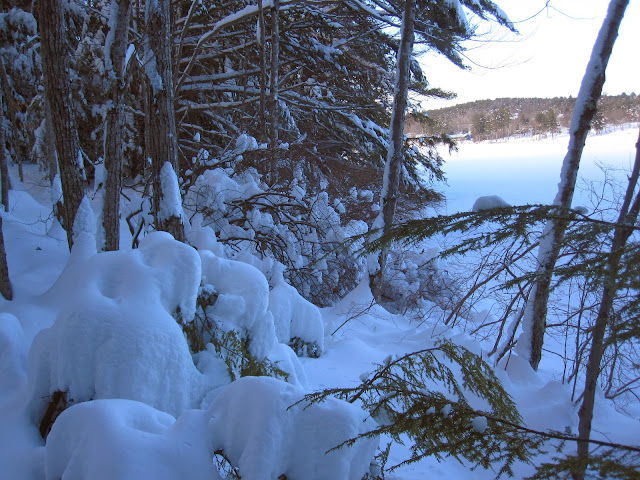 The cold mornings and clear air graced us with pristine sunrises hinting of alpenglow.

And frosty sunsets that even look cold!

Sunset is already occurring 15 minutes later than it was in early December, but the sun is just now starting to rise earlier in the day;  overall daylight is eight minutes longer than on the winter solstice.

It was cold enough on Sataurday that the only sign of animal life I saw was one set of fox tracks in the deep snow.  It used my old ski tracks a little bit, and I expect it will be taking advantage of them more now that they are tracked out again.

Today it warmed up 45 degrees from yesterday's low - all the way to 29!  And that brought out a lot more activity.  I saw skiers, and a couple of sets of snowshoe tracks on the lake. 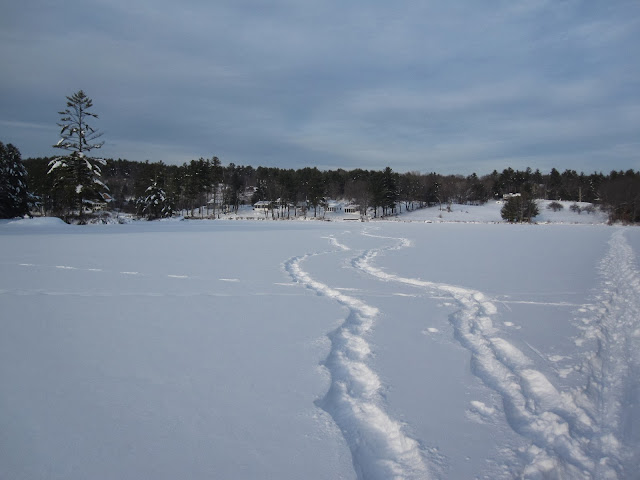 It's amazing that 27 degrees can seem downright balmy! 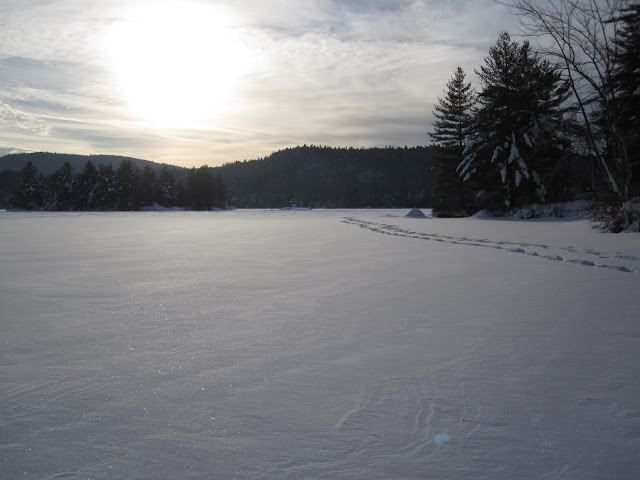 I followed someone's ski tracks (TG and HC I expect - thanks!) for a while, which made for much speedier travel than breaking out a new trail.

The animals were more active as well - I saw weasel scat on the road, and there were now deer tracks in snow, though they travelled on the road quite a bit as well.  And when it's been so cold, I'm always surprised to find wet slush on the ice under the snow.

Next we're onto a quick New England roller coaster ride, with temperatures forecast to rise to 40 degrees on Monday before dropping right back into the single digits.

I hope you caught a glimpse of the crescent moon on Saturday evening just after sunset - where ever you may have been.  It was fabulous here in Meredith.
Posted by Scott Powell at 5:35 PM No comments: