Defining the northern boundary of the Lakes Region is a set of mountains known as the Sandwich Range, the best known of these being 3490' tall Mt. Chocorua, with its bald peak sticking out prominently even among taller mountains.  Mt. Whiteface and Mt. Passaconaway are also in this range, and these two are the most southerly mountains of New Hampshire's famous 4000-footers (these two are visible to the right-of-center in the photo at the top of the blog).

Hiking these two mountains this week I was thrilled to come upon a large quantity of moose droppings on the trail leading up to Mt. Passaconaway.  In fact, on one half-mile stretch I counted 64 piles of scat right on the trail, some being quite large (and fresh).

It was nice to see signs of a good moose population close by the Lakes Region, even if not quite within the formal boundary.  I used to see moose regularly in Meredith around Lake Wicwas - sometimes up near Arbutus Hill Pond, sometimes swimming across the lake, and sometimes right on Chemung Road.
But the last moose I've seen around Wicwas was in 2013, and even their signs have been few and far between.  In 2016 I found scat on the trail in the Eames Conservation Easement, and also on Fogg Hill in Center Harbor, and in 2015 there were fresh tracks along Marion Lane in Meredith.

The moose activity I found this week was at an elevation between 3200 and 3300 feet;  it's likely they are now favoring the cooler environment to the north and at higher altitudes as the climate becomes warmer.  I recently read an article by Kristine Rines in the May/June issue of the New Hampshire Wildlife Journal about the decline of moose in New Hampshire.  Over the past 17 years, the estimated population of moose in the state has declined from over 7,100 to 3,200, and the biggest cause is shorter winters which allows more ticks to attack and weaken moose.  Research done by collaring and tracking moose shows the impact of shorter, warmer winters:  collared moose calves were found to have mortality rates as high as 80% when winter arrived late, versus 30% when there is an early snow and dry fall.  Considering that our winters are already 3 weeks shorter than they were just 30 years ago, and getting worse, it doesn't look good for our local moose population.

When I first heard of the tick problem, I couldn't understand how a tiny tick could kill a giant moose.  (Note:  these are "winter ticks", Dermacentor albipictus, not the wood ticks or deer ticks that bother humans and domestic pets.)  But biologists studying moose harvested by hunters have counted ticks in the tens of thousands on a single animal.

Now I get it.  They not only kill calves and adults, but they weaken females enough that it lowers their reproductive rate.  One helpful factor is that the state tracks moose populations and reduces hunting permits based on the population in each wildlife management area (WMA), and will stop hunting altogether when a threshold population is hit.  Already, hunting has been stopped in two of New Hampshire's wildlife areas - how long will it be before it's stopped state-wide?

Around Meredith, I still expect to see moose again, but it may be a rare event.  We can only hope that other species don't have the same fate, although there is concern that we may lose the loons to a warming climate as well.  But not this year!  Our loons are back on the lakes and hopefully focused on finding a good nesting site. 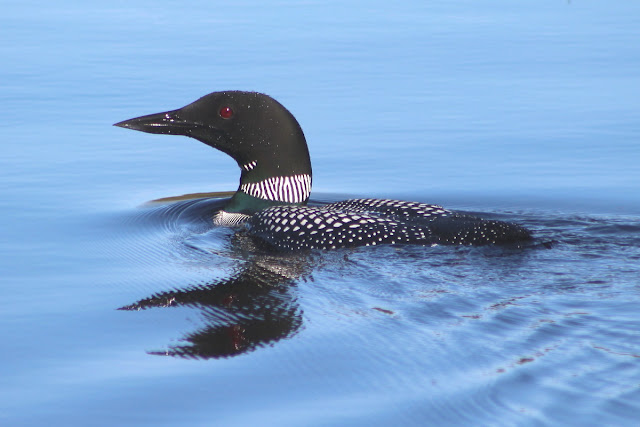 The nesting season is looking a lot better than last year's rainy spring.  The lakes are already at their summer levels and having been rather dry (the past two days meager rainfall notwithstanding), perhaps the black flies won't torment the loons as much.  We're keeping our eyes open for signs of nesting activity already.

And if you're out and about (with your tick repellent in hand!) keep your eye open for more flowers.  The lilacs and colombine are blooming now, and I saw my first Lady's Slipper on Wednesday.

And if you're on the water over the next few weeks, be careful to give the loons a wide berth;  we want to give them every chance to avoid the fate of the moose as long as possible. 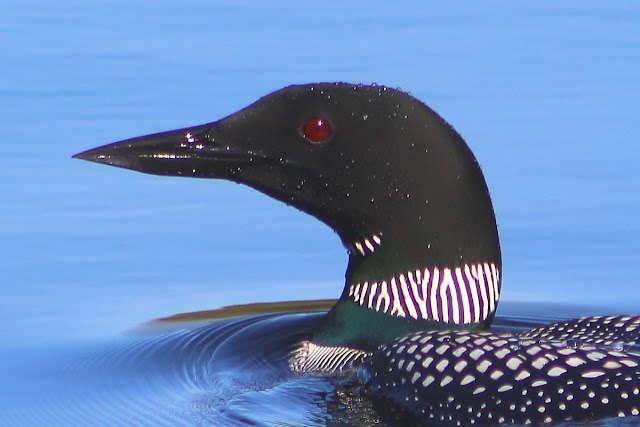 Posted by Scott Powell at 1:04 PM No comments:

The weathermen have really struggled the past two weeks - they keep forecasting rain, but it never happened.  The incredible stretch of warm sunny weather ended yesterday, but it was much appreciated by the trees which blasted out their leaves in just one week, and though good size, the leaves haven't turned dark green yet. 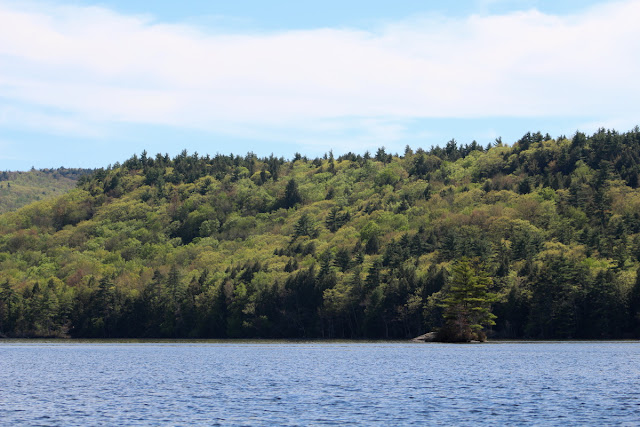 This provides a unique window into seeing what kind of trees make up the forests of New Hampshire as the dark green of the coniferous trees - pine, hemlock, spruce - stand out from the light green of new leaves on the deciduous trees.  A stark strip of light green leading up from the lake caught my eye again this week. 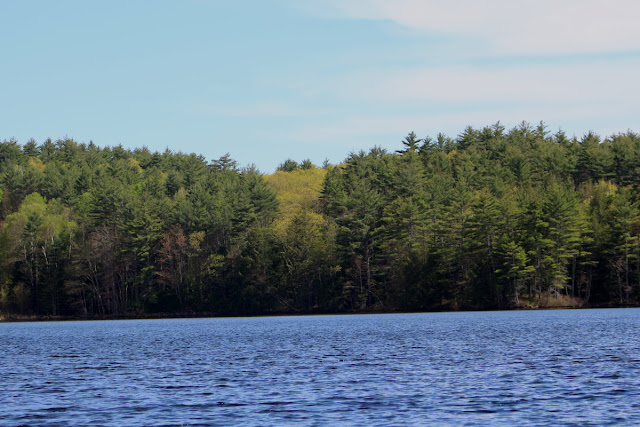 I asked why there is such a uniform stand of deciduous trees with white pines lining both sides.  The answer came quickly:  there is a ravine here with wetlands at the bottom.  White pine thrives in dry sandy soil, but not in the soggy soil of a wetland.  The natural community known as a Red Maple - Black Ash Swamp [Ref:  Sperduto & Kimball, "The Nature of New Hampshire", University of New Hampshire Press, 2011] is the domain of red maples which thrive in the rich, wet soil, and crowd out most other trees, save for a rare Black Gum.

A wide range of birds use this community for food and cover and on any morning a dozen different birds can be heard, though most are hidden away in the dense forest.  One pretty Chestnut-sided warbler did present itself to me.

The squirrels and chipmunks which live on the edges of these wetlands are not so shy, especially when you're standing just beyond the entrance to a chipmunk's new home that it's still in the process of furnishing. 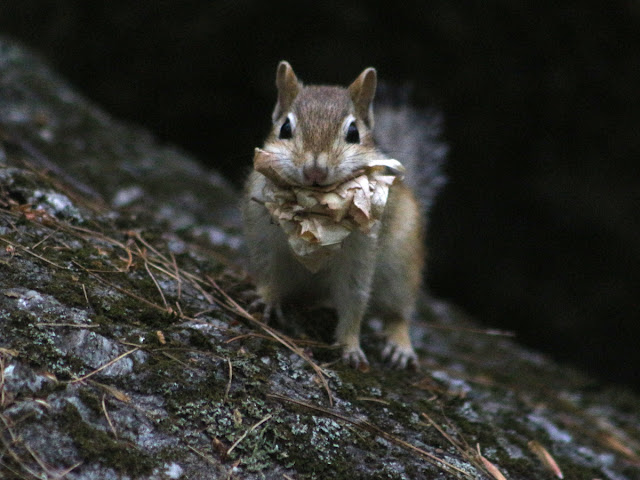 The squirrels just seem annoyed that you are in their territory. 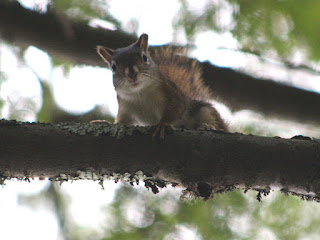 We can optimistically hope that the dry weather will mean a shorter black fly, mosquito and tick season.  Have you ever wondered why you can come back from a walk with three or four ticks on you?  Maybe you happened upon lunch break at a parasite conference.

But we allergy lovers sure appreciated the little rain we did get on Saturday to knock down the pollen levels a bit.  Those trees, loving the hot dry weather after those April showers, can dump out a lot of pollen from all those branches.

I'm hoping the weathermen - which are forecasting another dry week - are wrong again, and we'll get a little much-needed rain.
Posted by Scott Powell at 8:45 AM No comments:

Our particular latitude of planet earth is robing itself in the color of new life as trees burst out to show off their new summer sportswear.  The drab hills of brown and gray, having passed mostly through the short crimson phase, have progressed to the lime-green of emergent leaves. 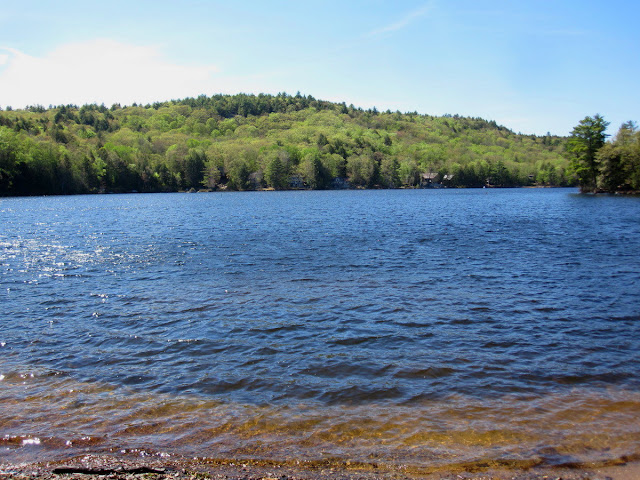 The lower trees tend to open their leaf buds first, as seen by these beech leaves which have escaped their long, thin buds.
And smaller red maples have done the same.

Upstairs, the taller trees lag behind, but only by a few days this year as the sudden warm weather pushed all residents along in quick succession.

One doesn't have to look hard to find flowers among the trees this time of year, as many are wearing white flowers with their green leaves to recognize Mother's Day.
After a cold and misty start early on this Mother's Day, the morning turned bright and mostly sunny here in the Lakes Region.

So in observation of Mother's Day, here is a bouquet of birds and blossoms that made an appearance this week to honor all mothers.  Happy Mother's Day!

Love you mom!
Posted by Scott Powell at 8:10 AM No comments:

A late ice-out didn't slow down the native flowers one bit.  The Trailing Arbutus, commonly known as Mayflowers, blossomed right on schedule, appearing on the first day of May.
These are always the first wildflowers to appear in the spring, and although tiny, they have the most beautiful, sweet fragrance, which is strong enough to note even as I run past a patch of them on the trail. 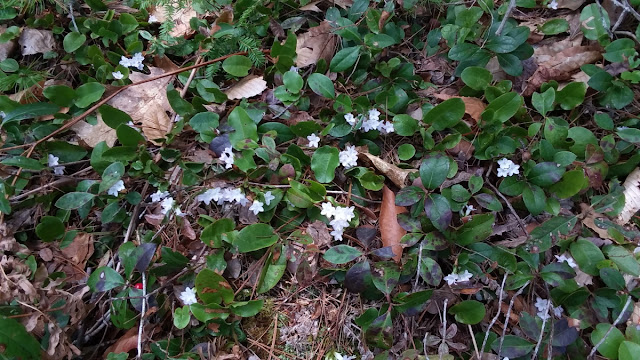 Pick one up and roll it between your fingers and you will be amazed at the scent.

I thought the late snow pack might slow things down a bit, but apparently not, as Marge Thorpe found a Purple Trillium blooming on the trail to Crockett's Ledge on Saturday morning, having survived the storm that blew through Friday night.

Another early bloomer is the Bloodroot, though this one has the advantage of being pampered in Linda's flower garden.

Though lacking a blossom, another early, very fast grower in New England forests is the Skunk Cabbage.  These seem to explode on the scene in wet, marshy areas, growing by leaps and bounds.  This cabbage patch is beside Chemung Road approaching the Hamlin trailhead, being fed by the stream that drains the beaver ponds that give the Four Ponds Trail its name. 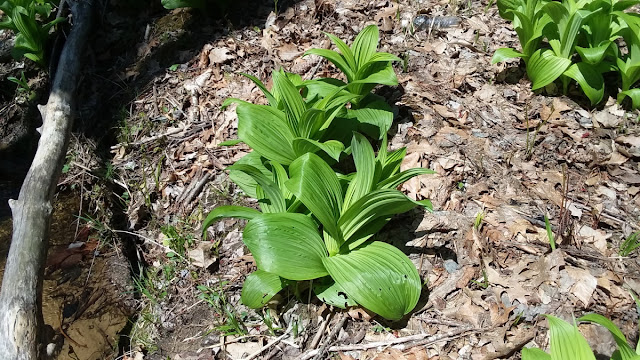 Unlike the Trailing Arbutus, Skunk Cabbage gives off a most unpleasant odor when disturbed;  its name is quite appropriate.  I have distinct memories of these from my earliest escapades in the woods around my home, wondering where that awful stench was coming from as I traipsed through swamps and marshes.  (And mom never yelled at me when I came home with mud up to my knees.)

Odoriferous or not, the season of wildflowers is just beginning, and will brighten our world for the next five or six months - a great reason to get out and brave the bugs.  Yes, the black flies have arrived too.

In the world of reptiles, one may find turtles on both land and water at the moment as they escape the cold water of their winter dungeon to seek out the warmth of spring air.
That big snapper was right on the trail in the Page Pond Town Forest, and doing a good impersonation as a rock, wasn't noticed until she snapped at us as we walked by - more than a little startling!  It's still a little early for momma snappers to be laying eggs, so perhaps she was also just out enjoying a walk on a warm spring day.

On the bird front, there has been an eagle scouting out Lake Wicwas almost everyday this week, causing much anxiety to the other birds on the lake.  The loons tend to call out when it's soaring overhead, but the Canada geese really get squawking when its around.  The eagle might only be catching fish and water snakes at this point, but I expect it's taking note of future dining opportunities when little loon and geese chicks hatch out later this summer.    : (
I would so love to someday see a bald eagle flying with a three foot long Northern Water snake dangling from its talons.

Finally, there is one more May flower that adds color to the otherwise gray forest this time of year - the Red Maple blossom.  One of my friends says the spring foliage season, which is largely administered by the red maples, is her favorite season.
Imagine how many of these tiny blossoms there must be to wash an entire hillside with the red hue of a New Hampshire spring.

Posted by Scott Powell at 3:09 PM No comments: