Astronomical winter won't arrive for almost four weeks, and even meteorological winter doesn't begin until December first, but it sure looked like winter in New England this Thanksgiving. 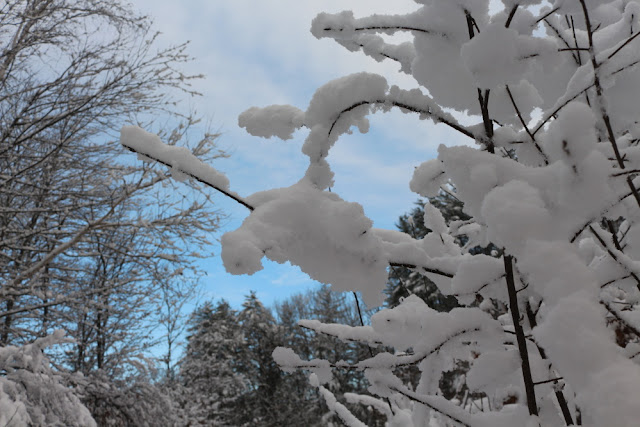 Change happens fast around here sometimes.  On Tuesday Lake Wicwas was mostly open water, but Wednesday the snow dropped in the lake made it look like the lake was starting to freeze over.
But it was mostly slush, and when the wind came it blew all that away so the next day there was only ice in the coves.
But as soon as the wind let up the entire lake froze over save where the current flows toward the dam, and around the shore where earth retains the heat - that's what a couple of nights in single digits will do.  I will be surprised if it lasts the winter though, and I always wonder if it counts as ice-in if it opens up again.  My rule is no, it has to last, and with warm weather this week we'll wait to see what happens. 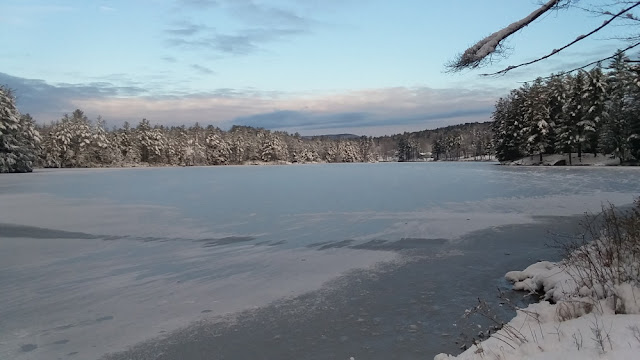 A frozen lake makes travel for animals much easier - even if we get a lot of snow because the wind will firm it up - and the lighter animals are already taking advantage of it.  Our local bobcat came by to hunt for squirrels yesterday.  We heard a ruckus outside in the early evening;  going to investigate we found the source:  squirrels high-tailing it for safety having seen a bobcat approaching on the lake.
Seeing a bobcat is always one of the highlights of winter, and it didn't take long for them to show up this year.  We put up one bird feeder after the snow and the cold stretch, thinking the bears were in for the winter - time will tell if we're right, but so far, so good.  So, the squirrels are back in force (they never completely go away) and right on cue, the bobcats came to hunt.
I wonder if it was its first visit this year, as it didn't seem to be keeping its approach hidden.  Usually they creep along the edge of the lake using the blueberry bushes for cover.  That's the approach it took once it realized there was food here, but then it was too late.

So this cat went away hungry tonight, at least from our yard, though with the plentiful stock of rodents this year, I expect it won't have much trouble finding a meal.  I'm hoping for more sightings, and maybe even a chance to see a bobcat catch a squirrel under the feeder.  If this snow keeps up there will be lots of good stalking opportunities for the predator, and difficult escapes for the prey. 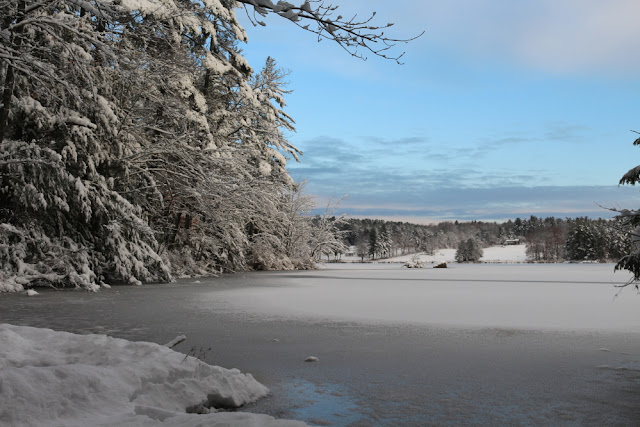 A late update: there were fresh bear tracks in the soft snow today. Bird feeders are back in the house.
Posted by Scott Powell at 8:24 AM No comments:

Email ThisBlogThis!Share to TwitterShare to FacebookShare to Pinterest
Labels: Bobcat, Ice In?, Snow

My how quickly things change.  Just a few days ago I was studying deer scrapes in the leaves, and by this weekend they disappeared under a white cloak and all kinds of tracks were waiting to be discovered. 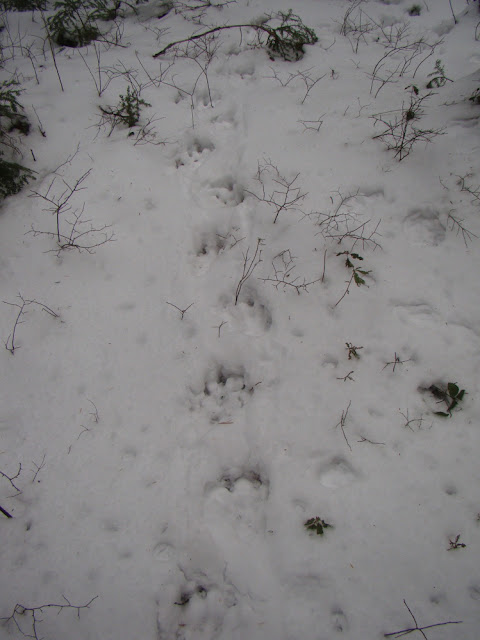 The sudden change in scenery occurred on Friday with a nice soft blanket of snow;  I even got to make my own the tracks in the forest as there was just enough cover for a short ski on the smoothest trails. 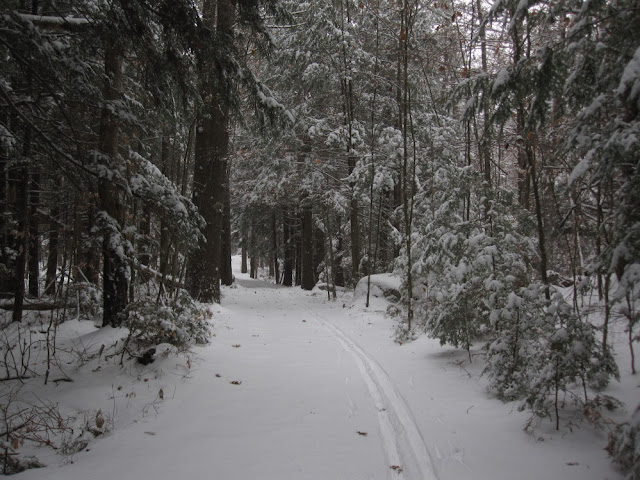 An early snow lets one see a great variety of tracks, as animals that will soon bed down for the winter are still active, joining those that will be out and about all winter long.  One big example (no pun intended) is the black bear.

Marge Thorpe found this great set of tracks over on the west side of the lake after a dusting of snow earlier in the week.  It appeared to be a mamma bear with at least one cub in tow.  Marge noted that as she followed the tracks, when they came to the top of a stone wall, they turned around and went back rather than climbing down off the top.  Maybe the cub didn't like the look of that big step!  Weather will determine when the bears settle down in their dens;  it may be a few more weeks before the bird feeders come out.

Another set of tracks not often seen in snow were made by beavers.

Beavers don't hibernate, but once the lake freezes over they become much less active, staying close to home.  But right now they are still building up their insulating layers of fat and collecting food for winter consumption.
There wasn't the visible tail-drag usually seen with beaver tracks so I wasn't sure it was beaver when I saw the first tracks, but soon enough there was no doubt. 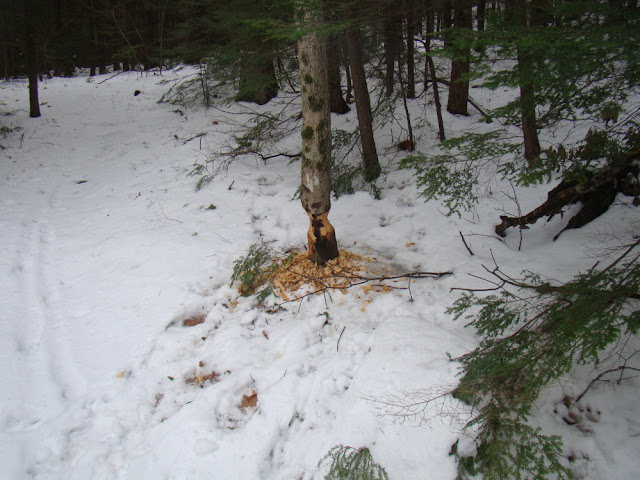 It was also quite clear where they come up from the lake to do their logging work.
They have even cleared out channels in the thin ice/slush on the lake from their frequent travels.

Where do they take all those trees and branches?  They put them right beside their lodge for handy winter snacking - a sure sign of an active lodge.
A bit farther along I thought I saw another, more ragged beaver channel. 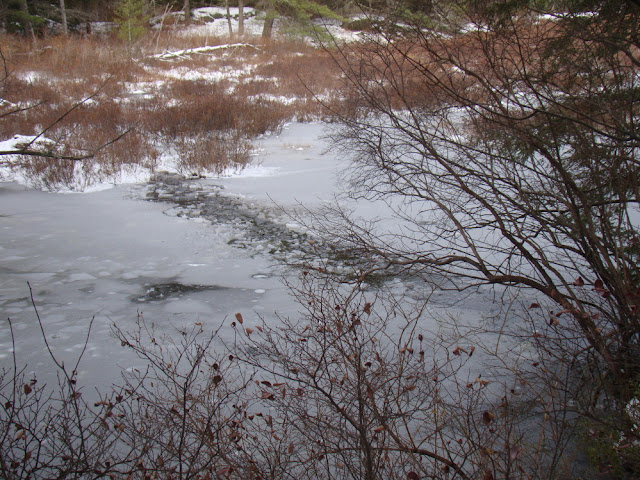 But as I approached I saw only deer tracks leading to the point of entry, so evidently a deer decided to make its way over to the nearby island to browse.  And there are lots of deer tracks everywhere - often following the trails - including these two tracks which were made by a doe and her fawn. 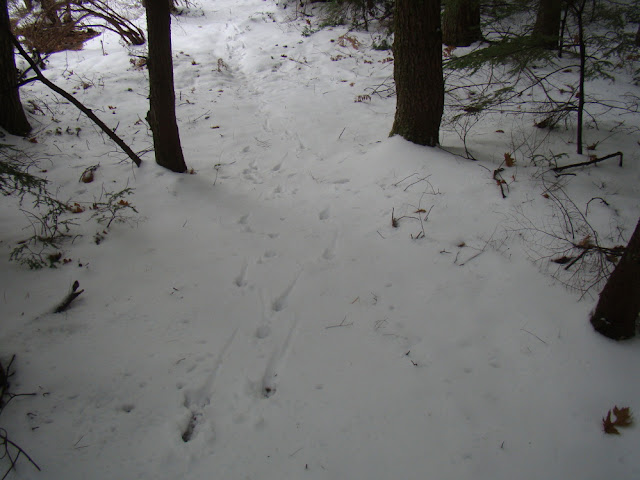 In several places they stopped to feed, in this spot, nibbling on some sheep laurel on the shoreline. 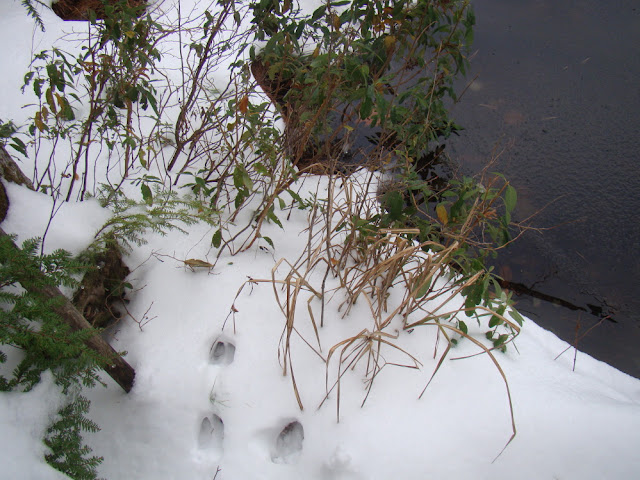 It was just an early taste of getting to see who's been out travelling through the forest all year.  I'm always humbled when I'm reminded that all these animals have been here all summer long without me ever knowing it.

This snow looks like it won't last long, but there will be more on the way!

Most of the smaller animals have their mating season in late winter or spring with their offspring being born or hatched several weeks later.  But the larger animals including moose and deer have much longer gestation periods, so they mate in the fall, again to give birth in the spring when food is plentiful.  (One interesting exception to this is the black bear which mates in June, but then employs something called "delayed implantation" so gestation starts around November with birth occurring in January, though the young won't leave the den until two or three months later, relying completely on the mother's milk during that period.)

The white-tail deer has a gestation period of just over 200 days, geared toward birth in late May or early June, so their mating period is right about now, and the bucks are busy marking their territory and rounding up their does.  The most visible signs of this are large scrapes bucks make in the forest floor where they scrape up leaves and soil and then mark the area with their scent using urine and the glands on their hind legs.

They tend to build these sites underneath branches - typically  hemlock in our area - and they will also scent these overhanging branches with the glands on their forehead.

Also, if you look at the very top of the photograph below you will see where the buck has used its antlers to rub scent on the trunks of small hemlocks, scraping off the bark, adding further scent to the site.

I can imagine scented trees facilitating the buck's scent drifting through the forest with the wind, and the scented liquid absorbed by the soil lingering for days.  This behavior will alert both male and females that a buck has claimed this territory and the does within it as their own.  You might see these right on a trail as deer often take advantage of easy travel along these cleared paths through the woods.

The cooling weather has started to drive the birds migrating from Canada our way;  this week I saw two groups of hooded mergansers on Lake Wicwas, including one pair, and one group of two males courting a single female.


We haven't had any winter weather here in the Lakes Region yet, but 30 miles farther north it's starting to look frosty.  I took a hike up Mount Moosilauke last week, and there were sure signs of winter up at the 4800 foot summit. 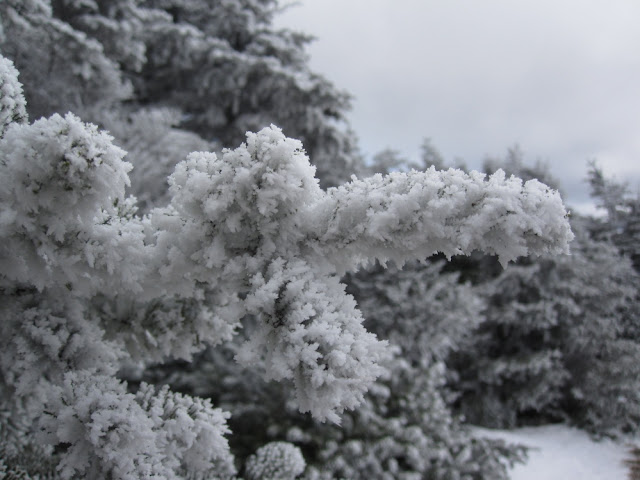 It was just a taste of what's to come.

Finally, on this Veterans Day, a thank you to all those who served our country - especially you dad! 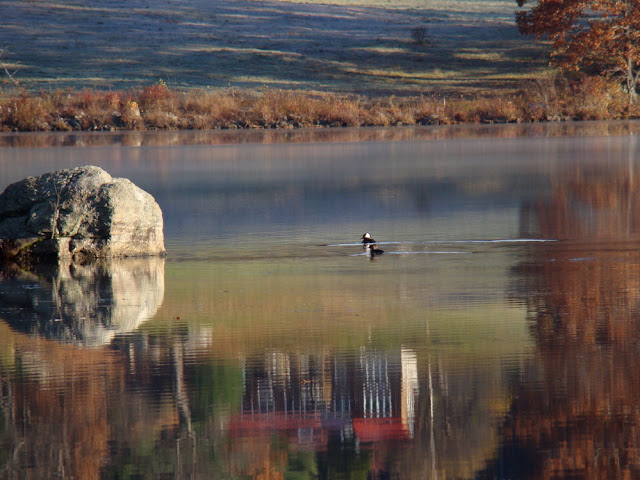 November 4, 2018: Signs of change visible through the fog

There's only one word to describe this week:  wet. 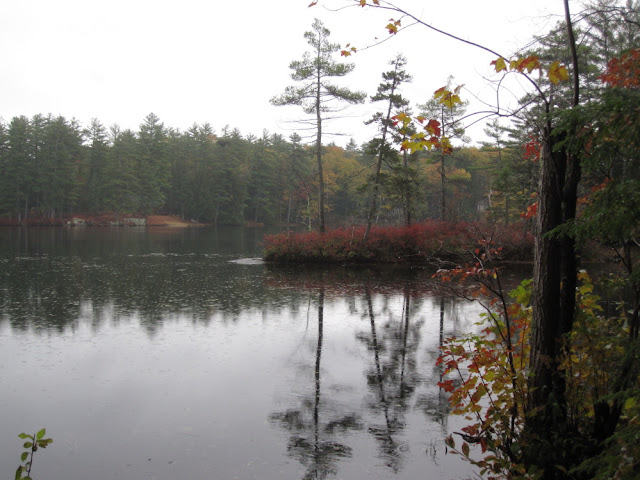 Well, maybe fog, rain, mist, or drizzle would work too. 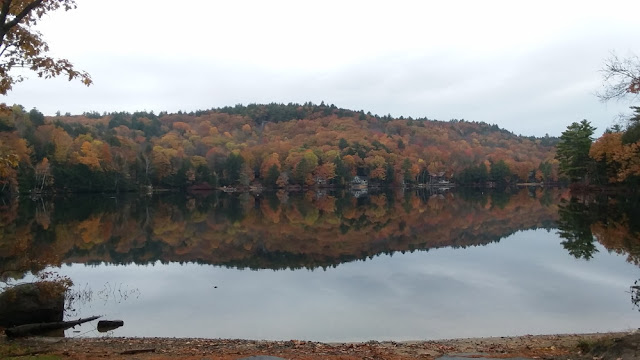 And gray would be pretty fitting as well, for that was the predominant "color" of the week. 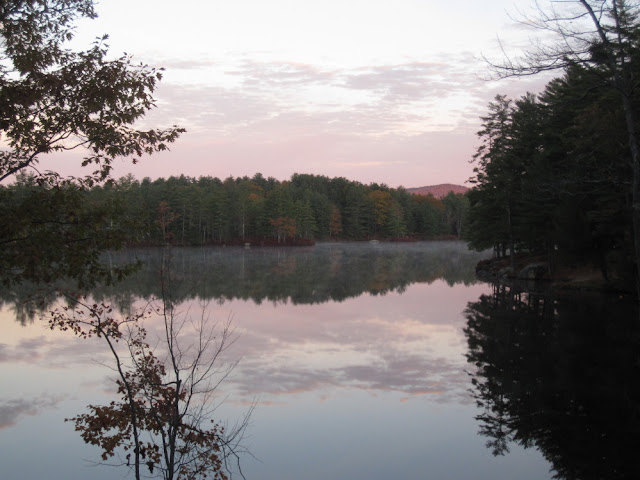 But it sure was calm - until yesterday when the winds howled.  The one decent day was Wednesday and I was fortunate enough to have a trip planned with a couple of good friends for that day; we got in a mostly-dry walk up to Crockett's Ledge in the Hamlin Conservation Area.

On the way we stopped in at the old cellar hole, the Stanton Cemetery, and took in the view of the White Mountains, where through the fog, we could see an early sign of winter:  Waterville ski area has started making snow on their trails.

Despite the rain I got outside enough during the week to appreciate the beauty of nature, even when the colors are yellow-nearing-brown with a patina of brushed pewter. 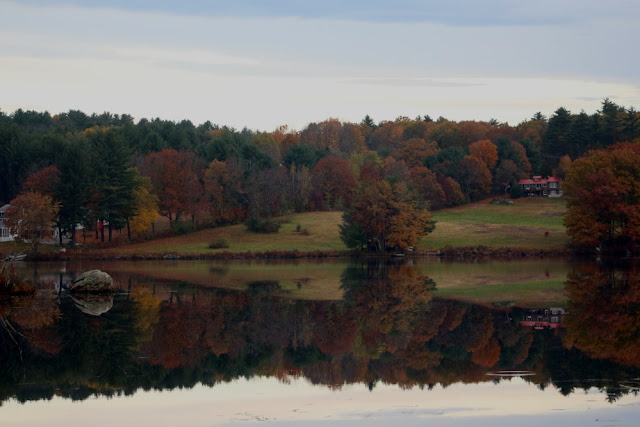 The brightest colors I saw all week were bittersweet berries I found last Sunday when it was almost sunny.  I had always thought that bittersweet had both red and yellow berries, but looking carefully at these I realized that's not the case.  It appears that all the berries start out with a yellow sheath over them, which when it peels off, reveals the red berry that lies inside. 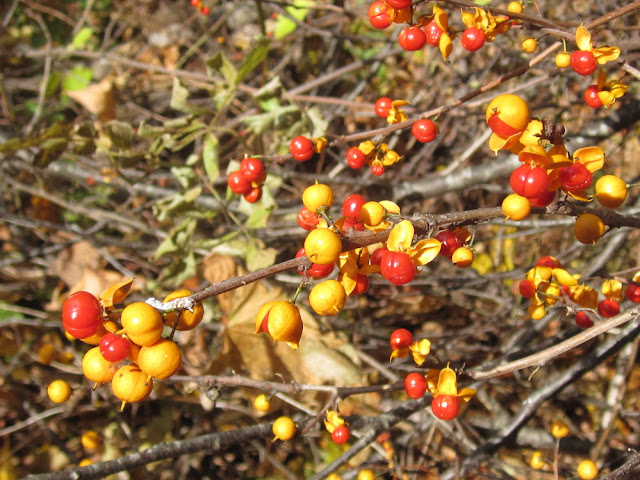 These provide beautiful contrast with the drab of November, which perhaps explains why they are so prevalent in New England, but it's still hard to look past the destructive power this invasive plant has on native trees as it grows around and up them, strangling them to death, and choking out competing plants down below.

Signs of wildlife were few and far between this week.  I saw a few mallards on the lake and one pair of migrating ducks far out on the lake that I think were buffleheads.  The coming weeks are prime time to see migrating birds on our lakes as they migrate south from Canada.  I also found fresh deer signs around.

Note that muzzle-loading season for deer started yesterday, and hunting for all firearms starts on November 14th, running through December 9th.  Wear your orange in the woods - you'll need it to been seen through the November soup.