Lake Wicwas enjoyed a fabulous Memorial Day weekend - it's so hard to believe it's only May with the kind of weather we've had these past two weeks.  There was a bit of wind, but in the calm moments the pollen is collecting and starting to clump up.  I think we still have several weeks of tree pollen to go. 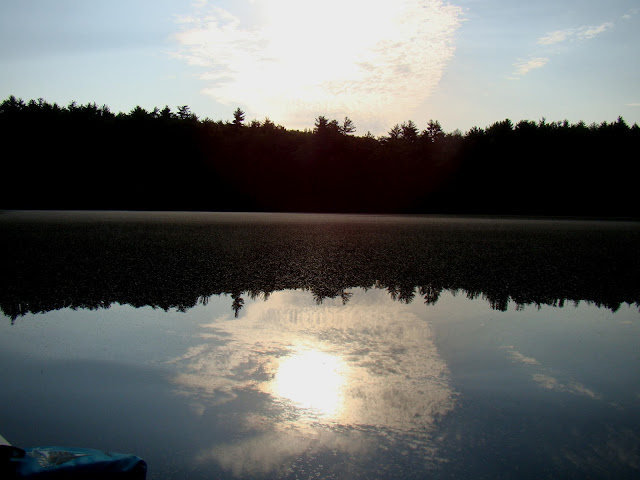 One never knows when an interesting bit of nature will just walk by.  I was out working in the yard on Saturday when this Yellow Spotted Salamander crawled right by me on the walk way.  These amphibians are usually pretty secretive, and this was in the middle of the afternoon, so I don't know what he was up to.  The Yellow Spotted  is one of the largest salamanders; this one was about six inches long.

At the other end of the spectrum of visibility is the Red Squirrel.  They are acting especially territorial right now, chasing each other all around in the dry leaves and up and down the trees.  They don't seem to have any fear and will stare you down if you're near "their" tree. 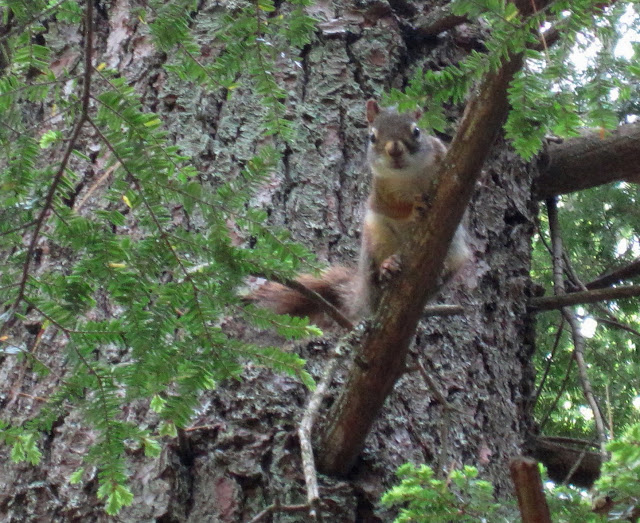 The Lady Slippers are now joining the wildflower collection, though this pair seems a  little pale.

Linda's mother's day flowers were attracting the Tiger Swallow Tails which have been quite abundant this week. 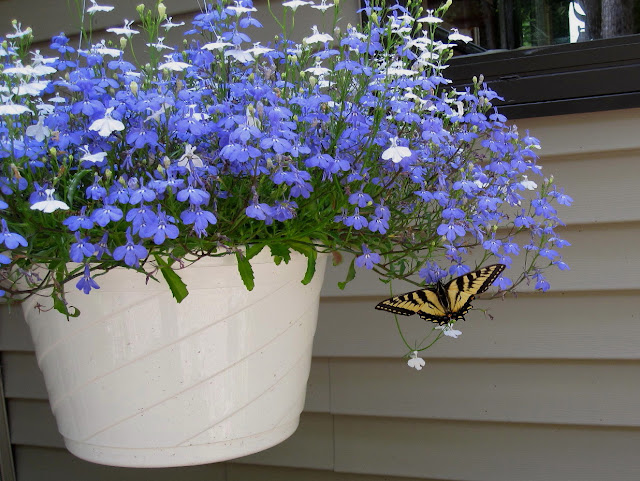 The black stripes and blue dots show this is a male of the species.

Dragon flies have been out for quite a while, but are now getting very numerous.  There are a few damsel flies emerging as well.  This one must have just come out of its larval stage, as it has almost no color yet.

Humming birds are also numerous at this point.  Even though there are lots of fresh flowers around, they still seem to favor the easy meal from the bird feeder! 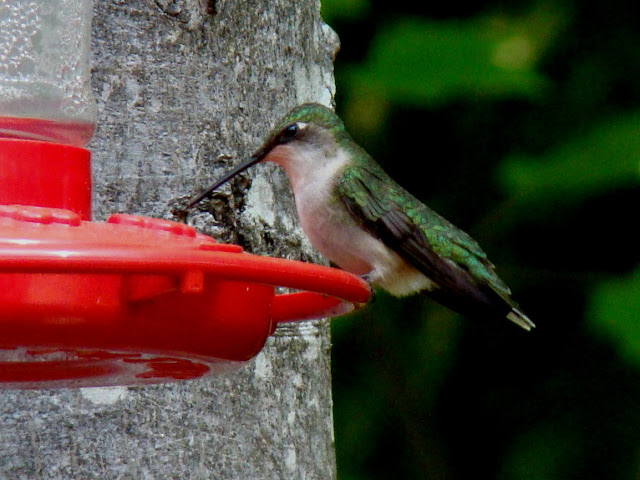 Posted by Scott Powell at 10:29 PM No comments:

After six weeks, I'm finally back on my feet and able to take my first kayak on Lake Wicwas, and a walk along the shores - and there's a lot going on!  We had some gorgeous warm, sunny weather, and this calm morning revealed the presence of what's afflicting allergy sufferers, with a layer of pollen on surface of the lake. 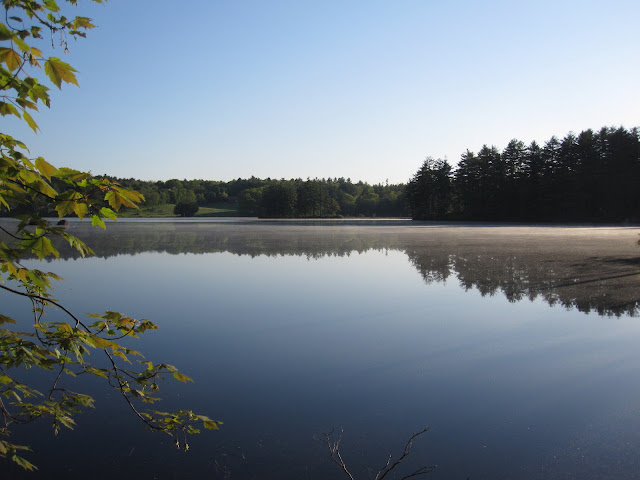 While taking this picture, I noticed a small black fly suspended in the air, caught in an invisible spider web! 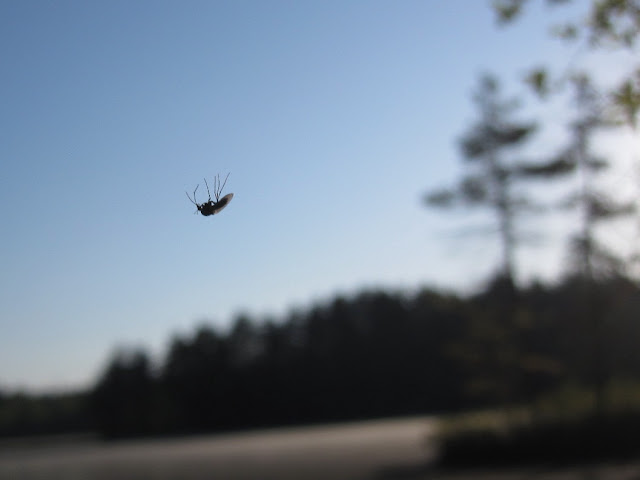 Here's the source of much of the pollen - the flowers in the oak trees are releasing their massive store of pollen.  It's perhaps not as thick as the White Pine pollen that will be released soon, but there is a lot of it. 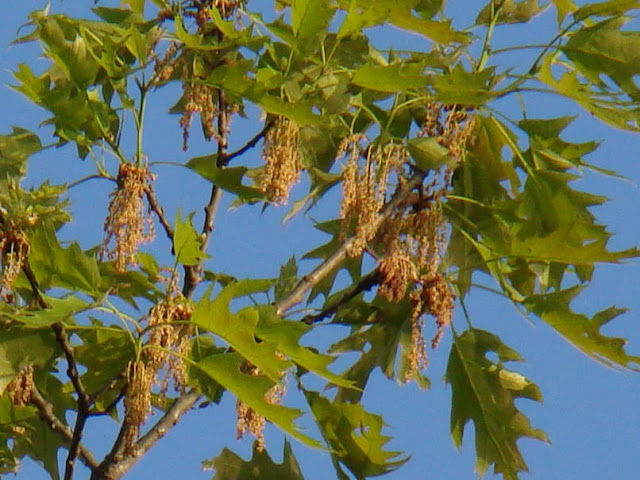 From flowers at the highest point of the forest - the Red Oak - we go to the lowest floor and find one of the most remarkable flowers in the forest, the painted trillium. 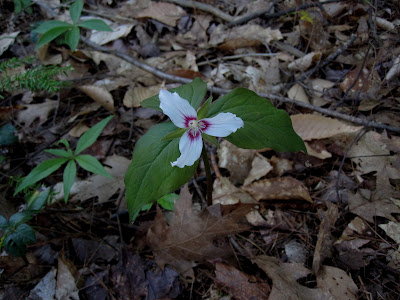 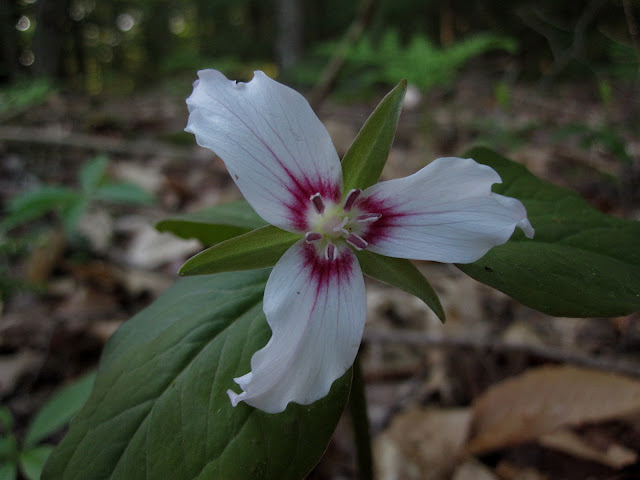 I don't quite understand why there are hundreds of starflowers, and thousands of violets and mayflowers, but only one trillium along my usual  hike.  What is it about that one spot that nurtures a trillium that is so different from the rest of the forest?  It also makes me realize how easy it is for a rare flower to be eradicated - just one person plucking or trampling a trillium every few years could be the end of them.

Along the shores of the lake I found lots of Hawthorn blooming.  I first noticed the sweet fragrant smell coming form shore, and that led me to the flowers. 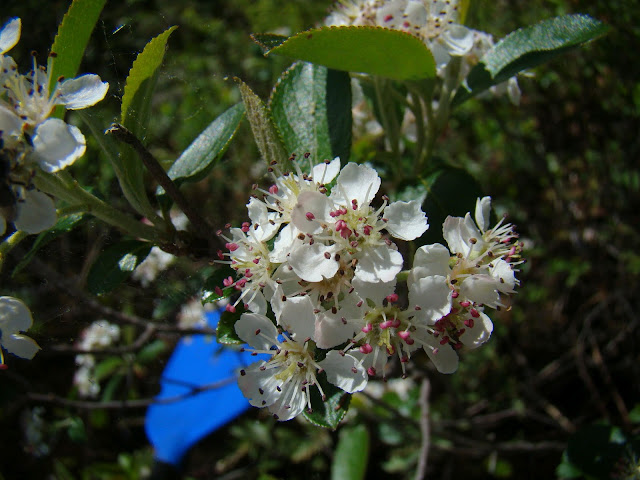 On this one you can see another fly caught in a spiders web! 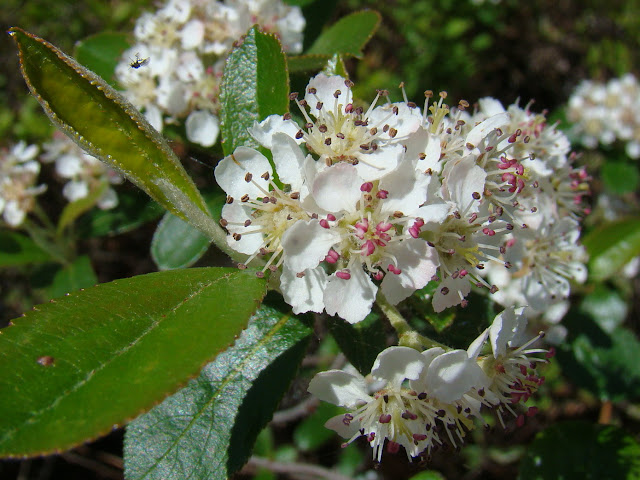 And here's an insect that evaded the web and is helping with pollination. 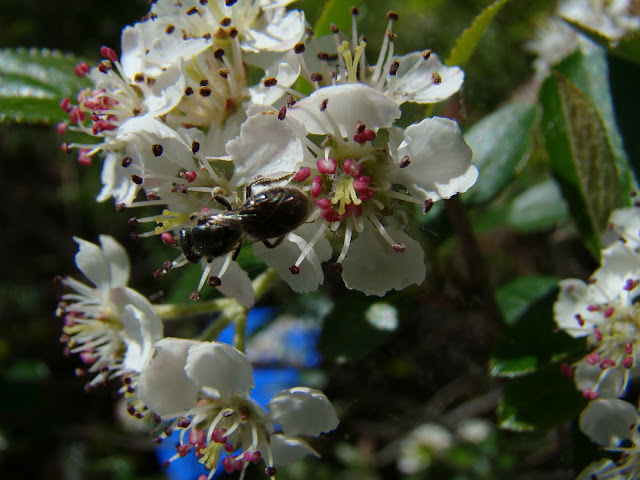 Out on the lake itself the plants are growing rapidly.  The Yellow Pond Lilies are already blooming where they get a lot of sun, and the lily pads are already giant. 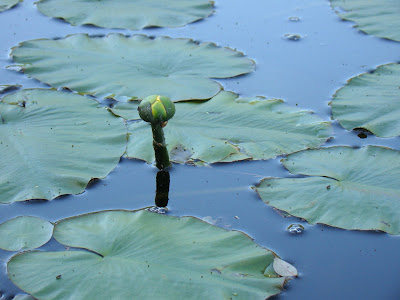 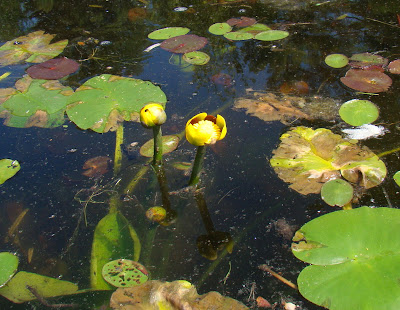 The young water creatures are also growing quickly.  I saw a water snake that is already almost a foot long, and this painted turtle - which is only about two and half inches long, though there's no scale to see that in this picture. 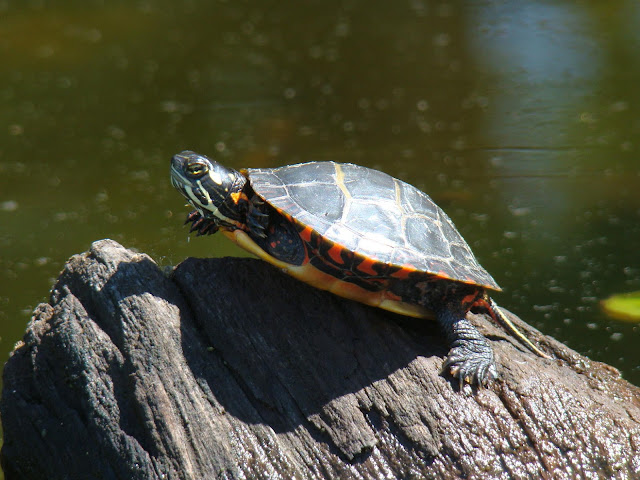 I saw lots of birds also, including the cormorant sitting high on its pine tree, the loon pair (scouting for a nesting site) and the geese.  It looks like they have a child care center, as this one pair of adults was watching over at least 15 goslings. 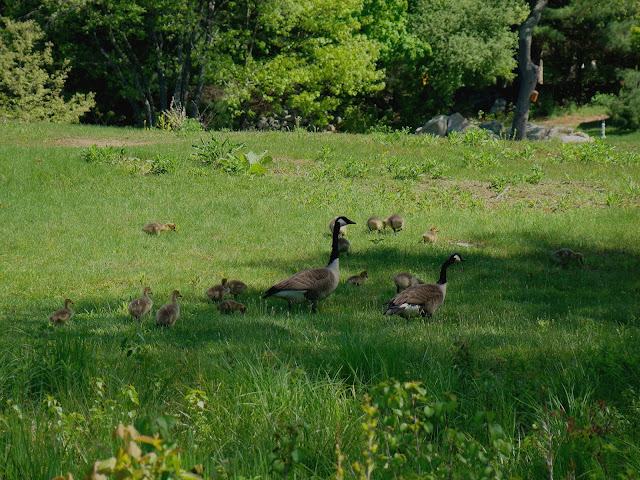 When they go on family outings they somehow know which ones are theirs. 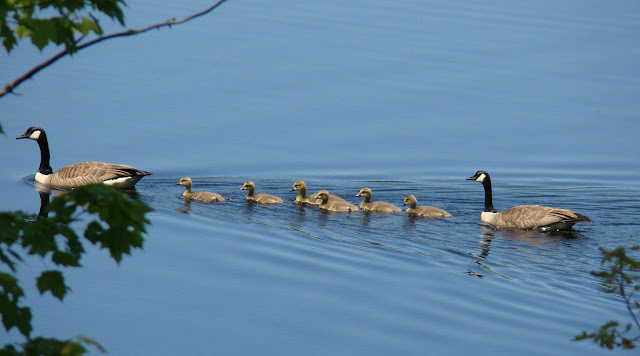 There are many Red-Wing Blackbirds providing lots of color to the marshes, both visually and aurally, as they bestow a large variety of loud, stark calls to all visitors. 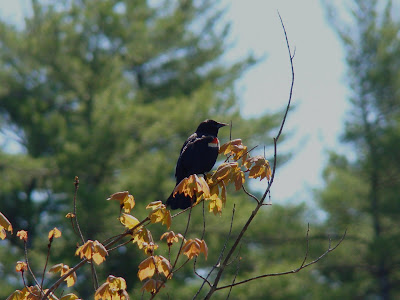 A bird I don't think I've seen before at the lake is an Oriole.  I had to go to the books to look this one up - it's a female.

She was flitting from shrub to shrub along the shoreline.  Orioles like fruit, and she was in the blueberry bushes, but she wasn't finding any yet! 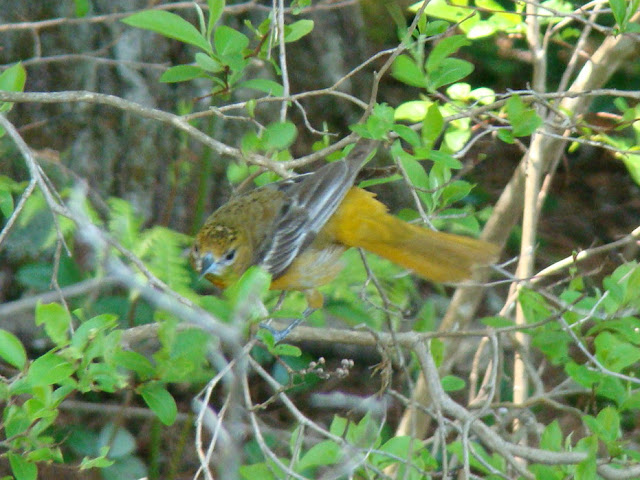 But the most exciting bird sighting was a pair of Broad-Winged Hawks that circled overhead for a long time.  On the thermals of the hot afternoon (it was 84 yesterday, and 89 today!) the two of them soared directly above us.  We first heard them calling in the trees, so we saw them as soon as they set sail, getting a great look at their wings and tails as they spread, flared, and narrowed them, maneuvering to find the best lift.  It was too fascinating to leave to get a camera, but here's a link to a picture that shows the sight.  (I'm respecting the photographer's copyright request.)

One other really neat sight this week that I didn't capture on film (that is, silicon) was a Mink that hopped along our shoreline about 8:30 one morning.  It went right along a path, then down the bank of the lake, and we followed it along the shore by the shaking blueberry bushes as it searched for frogs, chipmunks, or anything else it could find where land meets water.

There were a couple of less enjoyable sights this week.  This one, man-made, of an old tire in the lake, was disappointing.  It was right next to a pressure-treated 4x4 from the dock on Bryant Island that was cut out of the ice two years ago.  This must be the spot where flotsam collects.  I'll go back once the boat's in the lake - nothing to be done about it in a kayak.... 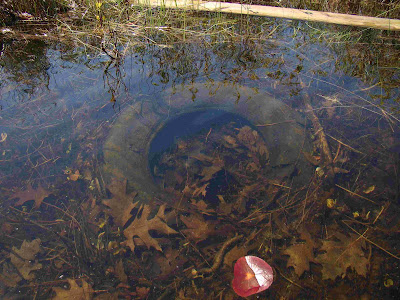 The sight of tics on the grass is much easier to take, but still not fun to see! 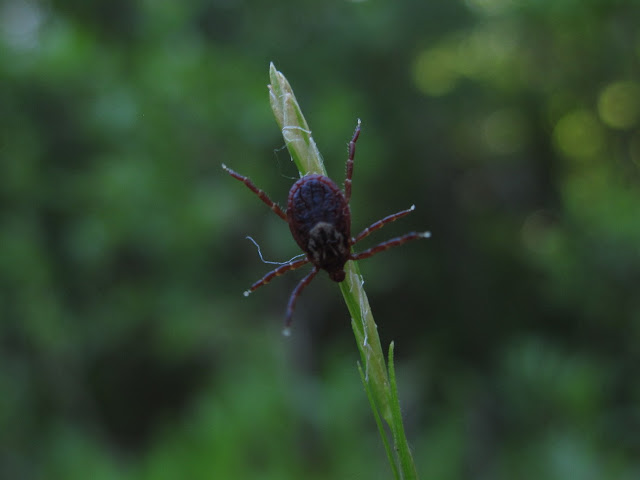 They are so incredibly well adapted to catch anything that goes by them - look at the tiny barbs on their legs.  Their legs move around slowly most of the time, but when I got really close, they starting vibrating madly to increase their batting average.

These tent caterpillars are also not a pretty sight.  This nest was munching on a black cherry tree, already having stripped a number of branches. 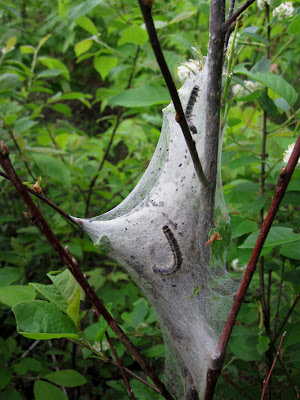 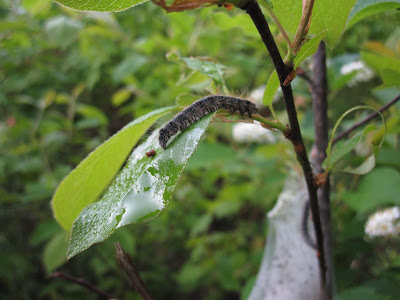 I'll end this rather long rant with a beautiful sight of the coming season.  I'm looking forward to seeing lots of people out on the lake next weekend as we remember those who gave the ultimate sacrifice so that we may enjoy the freedoms of this beautiful country. 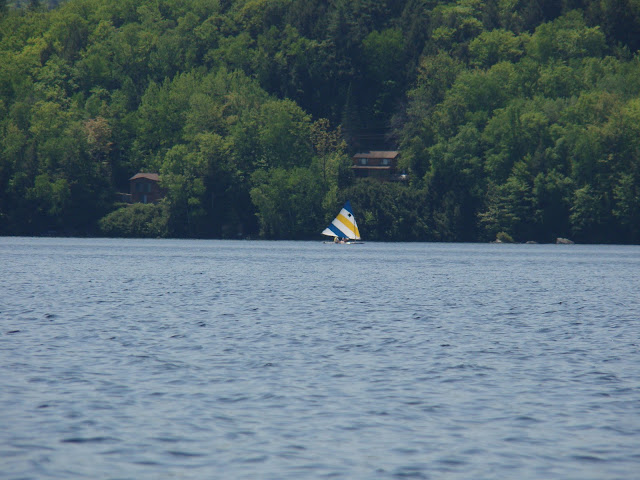 Lake Wicwas is really starting to come alive now.  All the trees save the oaks have leafed out and are turning darker green, and more and more of the other plants are joining them, including a flower I haven't noticed before - a tiny member of the lily family, the Sessile Bellwort.

Here a fern that was just a sprout last week is about to unfurl. 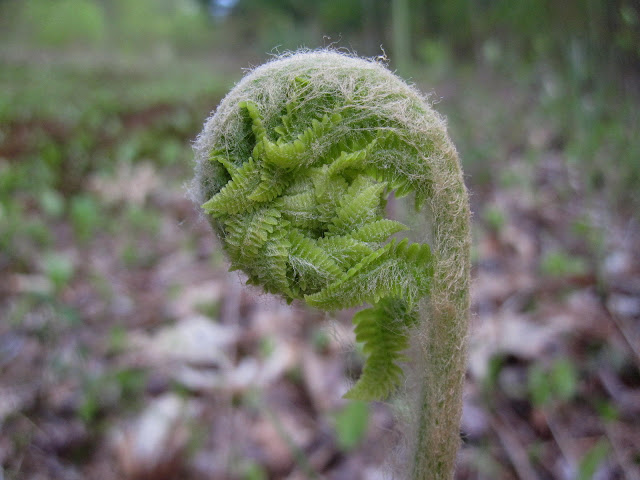 And a few other pretty flowers:

The blueberries have set their blossoms, and the vestiges of this summer's fruit can be seen as minute green specks where the blossoms have been relinquished.

Another fruit, the black cherry is in bloom;  each blossom will form a single cherry, and tiny insects are helping with the pollination. 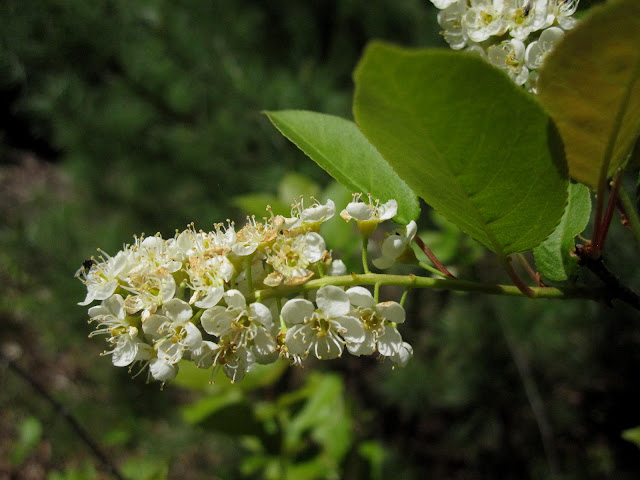 An advantage of the cool, wet weather this past week (in addtion to filling the lake back up) is that the flowers have a much longer season.  Also, the black flies aren't too bad yet, but there are plenty of tics around.

I found this Orange Jelly Fungus on the ground, but it must have fallen off the tree where it grew.  Jelly fungus are reportedly edible, but I didn't sample it!
I saw a deer enjoying the fresh, tender foliage of the spring plants, consuming lots of nutrients in the last month of her gestation period .  Whitetail deer have a gestation period of 200 days, with mating taking place in late November.  Both male and female mating clocks are triggered by the amount of light in the day, so they have a quite precise mating date that is not influenced by weather.  Thus fawns are usually born in early June, though it can be delayed if there is insufficient food for the doe so the fetuses (there are most often two) need more time to gain sufficient weight.  And if a doe doesn't conceive at her first mating, she will have a second heat in about 30 days, delaying birth until July.

The geese don't wait so long - their young have already hatched out and the goslings are being introduced to the lake by their parents.  Talk about having your ducks in a row! 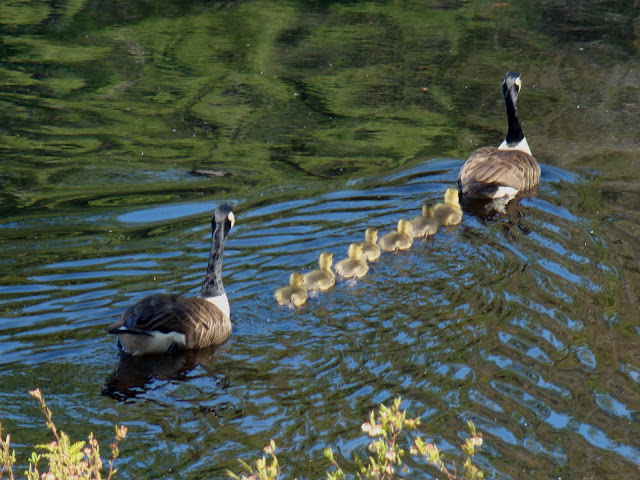 Posted by Scott Powell at 9:10 PM No comments:


This week the insects started to invade Lake Wicwas.  The black flies have hatched out, but they aren't the biting types yet - at least mostly.  I did get a bite or two, but mostly they were still the swarming types.  But by next week, life outside will change....

There are lots of other bugs joining them, including tiny green caterpillars rappelling down their silk threads from high in the trees, floating far on the wind as they travel to spread their genes to new territory.  I also saw the first butterflies of the season, including a Red Admiral, which shows the migratory insects have started to find their way to their summer homes.  The Red Admiral winters way down in Texas!

With the insects comes the arrival of the flycatchers.  I watched a phoebe sitting in the tip-top branches of the tallest oak trees, flicking its tail about, and then darting off to capture an insect before returning to its perch.  One less insect to deal with!

A more diverse range of flowers is coming out as well; we are nearing the peak of the spring wildflower season.  Decorating our world right now are Fringed Polygala, Goldthread, Wild Strawberry, and many others.  Any walk outside will surely reveal some of these for you to enjoy. 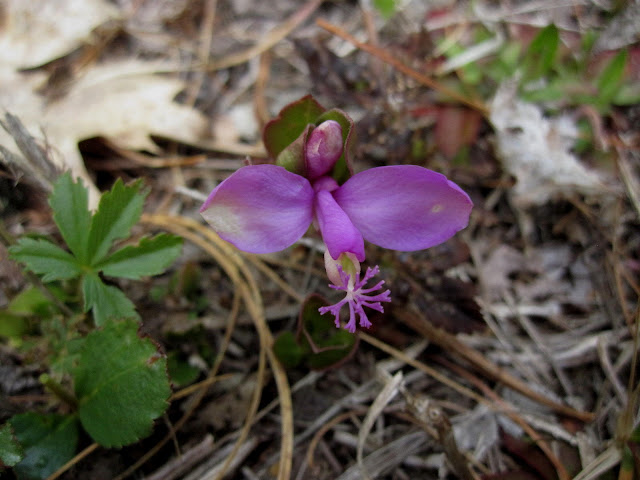 The trees are also making good progress toward summer.  The red maples are especially colorful;  their true color is apparent on both their fruit ("keys") as well as their leaves that have not yet turned green with chlorophyll. 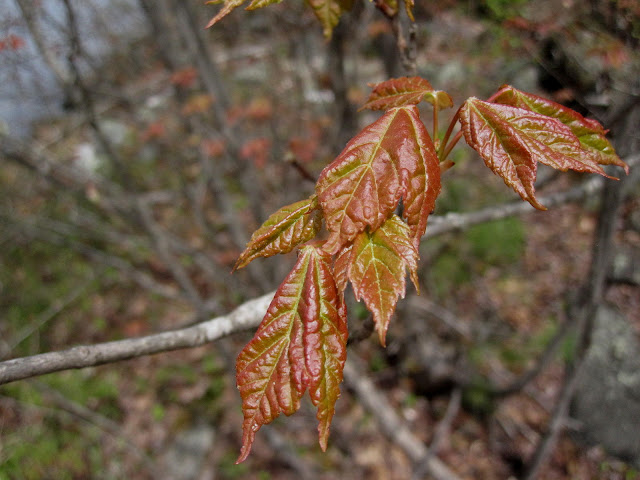 I was interested in the bracken fern, which are just starting to unfurl.  Bracken are the three-branched ferns, and it appears that they send up a tall, sturdy stalk as much as two feet high before they open up their leaves.


In just a few weeks it will look like this: 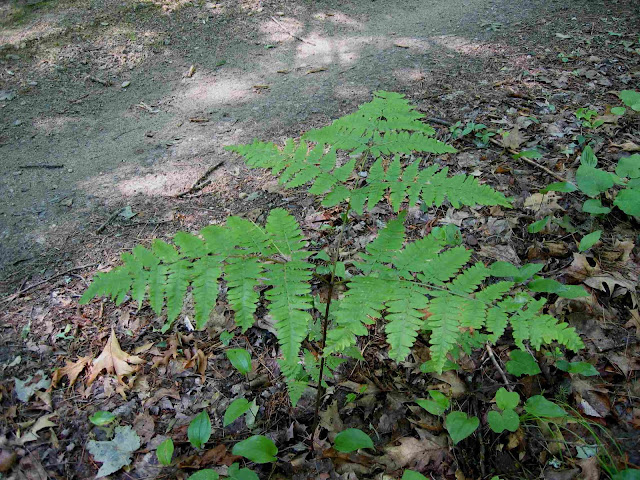 Posted by Scott Powell at 9:37 PM No comments: