It's certainly Wood Duck migration season in the northeast.  All weekend there were large flocks of wood ducks visiting Lake Wicwas on their way to their winter home in the southern part of the united states.  They started to congregate in the evenings just before sunset.  First a group of five or six would come into the cove, then another group would come along and join them, drifting around a bit while they decided where to put down anchor for the night.
A third, or even a fourth group would add to the flock.  One night there were 20, the next there were 27, more than I've ever seen, so their population seems to growing. 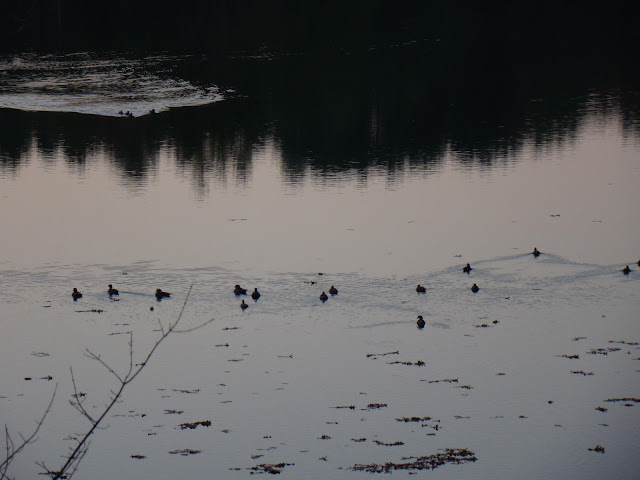 Less than a hundred years ago, wood ducks were just about absent from most of their range, due to over-hunting for their meat and their colorful feathers. 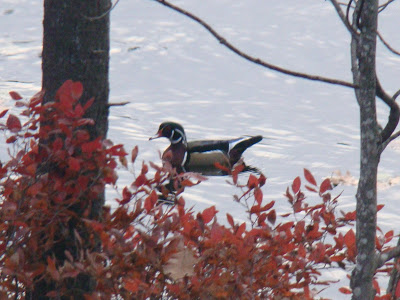 But the Migratory Bird Treaty Act of 1918 started their path to recovery.  They also had help from beavers in their recovery.  Beavers, which themselves had been exterminated by trapping for their pelts, were reintroduced to central New England in 1921.  Their habitat-building creates ideal wetland environments for wood ducks and aided their recovery.  It's another example of how species are interrelated, and losing one species can have a ripple effect others.

On the topic of birds, yes, the loon chick is still  here, as is at least one of it parents.  The two were fishing together, and even though junior is almost as big as the adult, the parent is still catching fish for it.


The geese are still on the lake as well;  perhaps they know it's hunting season, and are hiding in plain sight where they blend right in with the rocks. 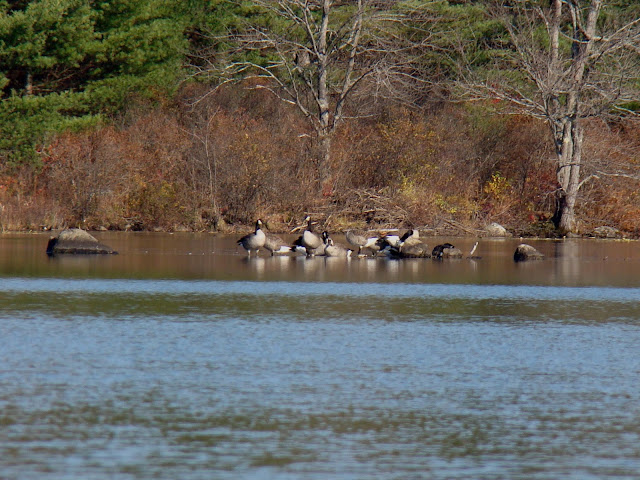 As for human activity, it is declining along with the temperatures.  There are still a few boats left on the lake, but only three or four, 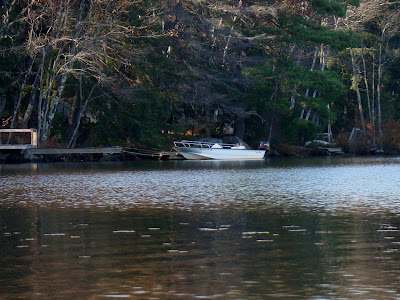 and most of the docks are out of the water. 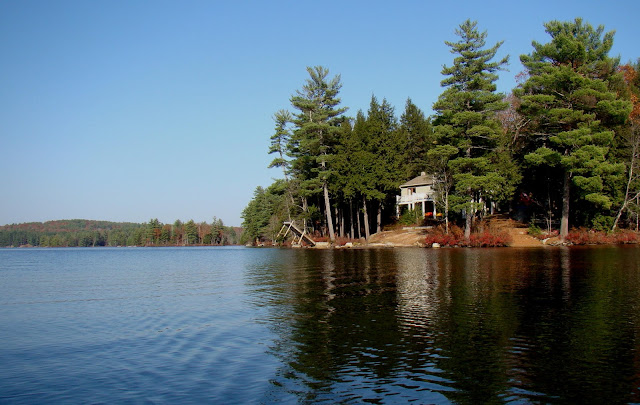 Someone even is giving us an early warning about the coming season, though I think at this point it is pretty evident. 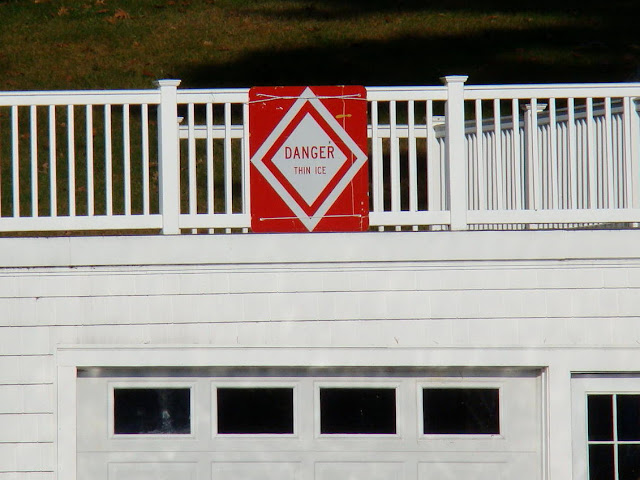 The lake level is a few inches below full, and draining rapidly, with all the boards out of the dam.  There should be enough time to give Lake Wicwas a nice reserve capacity for the arrival of Hurricane Sandy.  Late October has been a stormy time the last couple of years - remember last October?

Let's hope we avoid a repeat of this scene with this storm!

It's transition time at Lake Wicwas.  One day it feels like summer is trying to hang on, and the very next day it feels like winter is around the corner.  Saturday was warm and humid; nice enough to go out on the lake for a paddle.  There were dragonflies in the air, water striders on the lake, bumble bees on the flowers, gnats or flies swarming around, and even a spider out enjoying the sun. 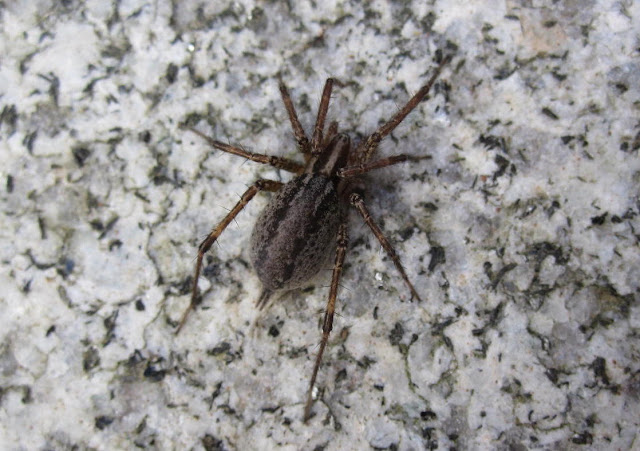 I also saw two Osprey - unless it was the same one twice - and our young Loon still on the lake, though no sign of its parents. 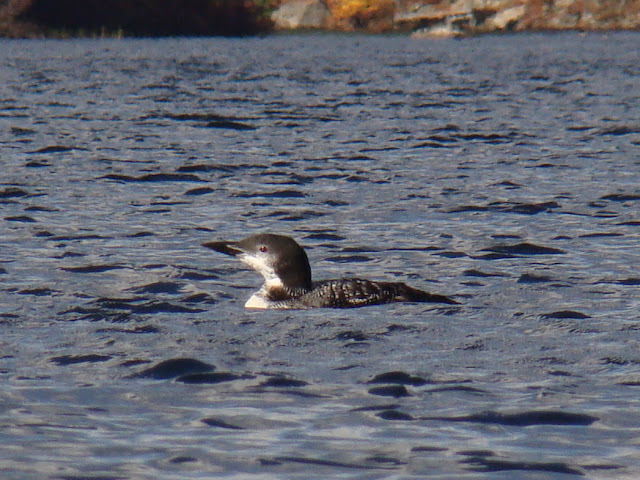 The foliage is past peak now;  the primary colors are the burnt yellow of beech and the dark red and maroon of oak, with an occasional bright splotch of aspen.

The blueberry and huckleberry are also providing some bright red color along the shore line.

The heavy rain late in the week followed by the warm, humid weather seems to have brought out a battalion of mushrooms, mostly of one variety.  There are masses of them everywhere.  They emerge brown with a slimy, sticky liquid on them, and then turn white and drier in a day or two. 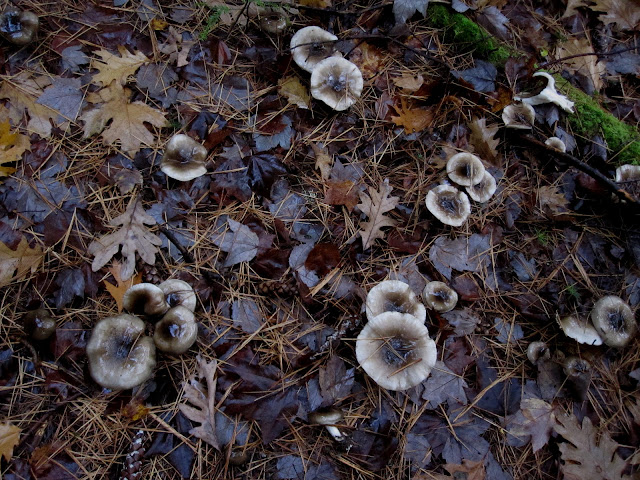 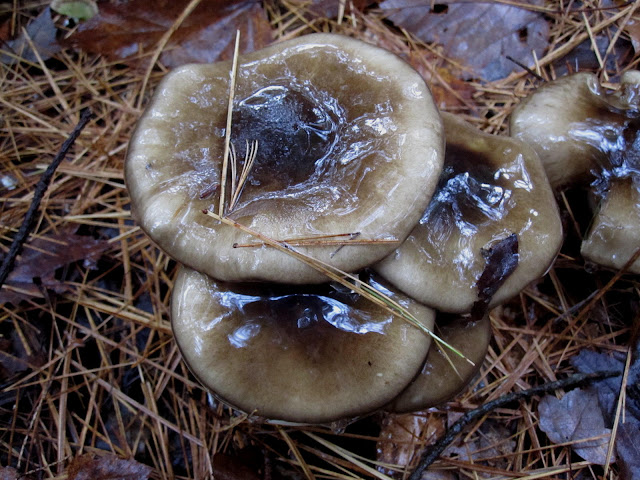 There was a fishing tournament on the lake this weekend.  They were out early in the morning with the temperature in the 40s.  My first thought was, that doesn't look like much fun.  But then I figured it's no different than skiers out in -20 windchills, or golfers waiting at the first tee for the frost delay to end.  People are just in love with their chosen pastime! 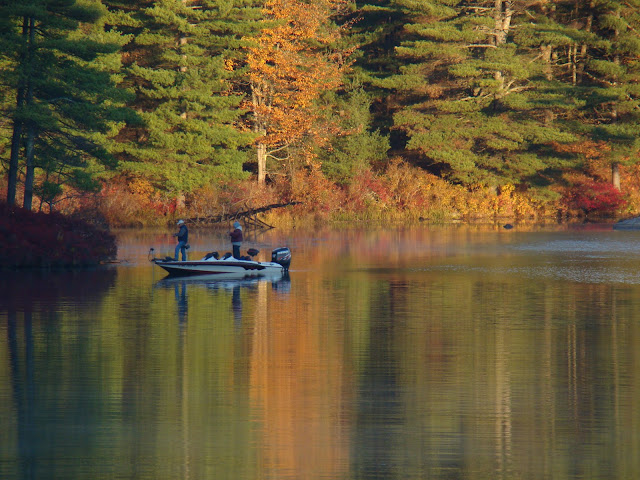 Earlier the same morning a flock of six Wood Ducks came by looking for breakfast - and evading the morning hunters! 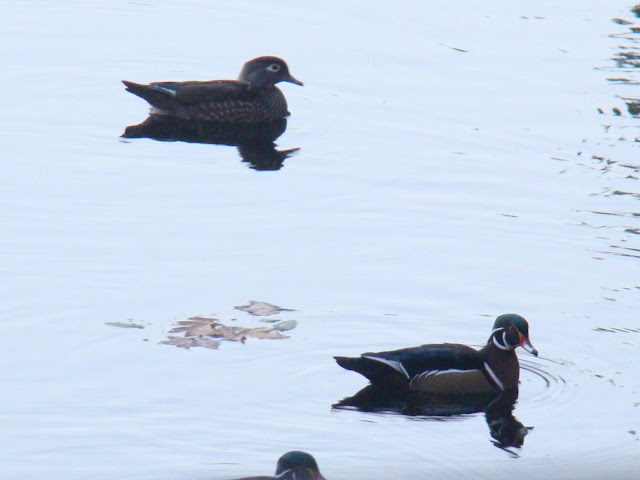 Vestiges of summer, then inklings of winter.  It's that time of year. 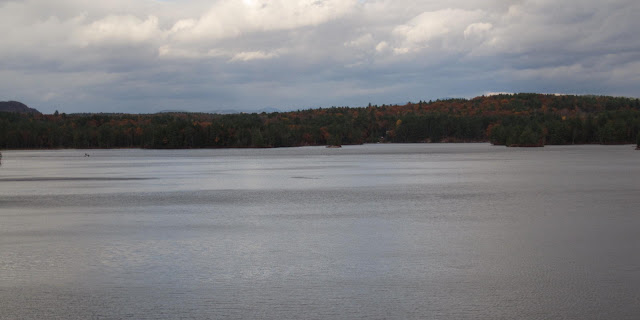 Frost on the pumpkin!  Lake Wicwas had its first freeze on Saturday morning, though only in open areas that were exposed to the cold sky and the effects radiational cooling - anyplace protected by a cover of trees remained frost-free.  I didn't see any pumpkins around the lake, but there was frost on the leaves that had fallen into open fields. 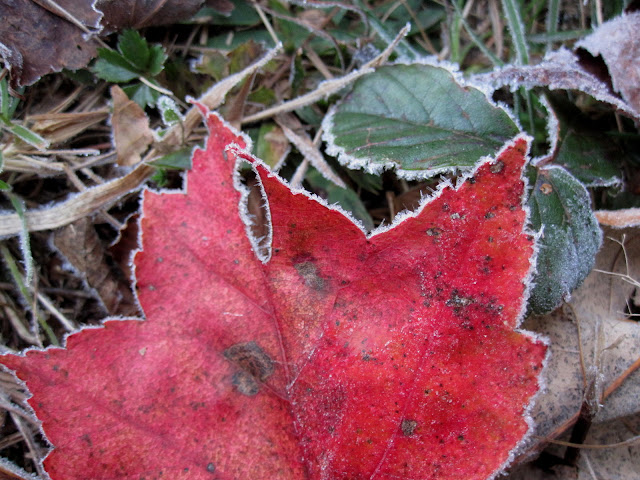 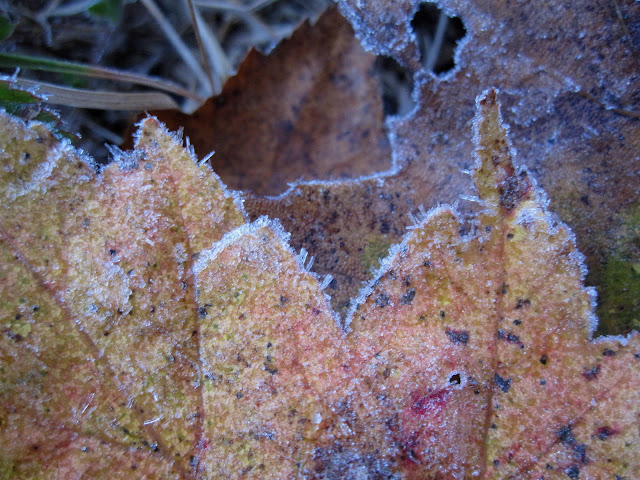 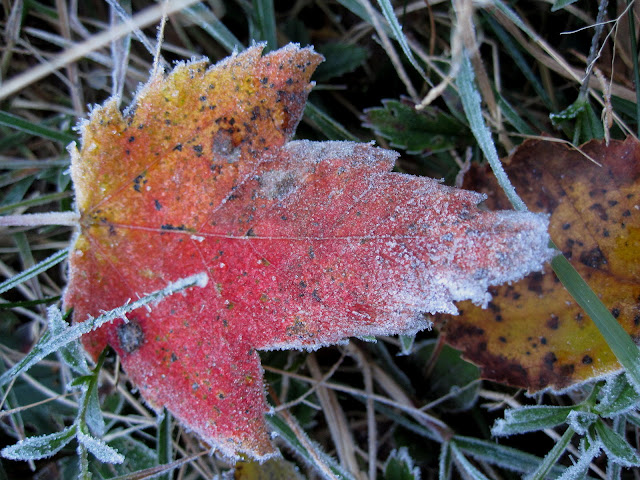 With a clear day upon us, we had a beautiful walk up to the White Mountain Ledge on the Hamlin trails, and found some nice views to the north.  We got one glimpse of a snow covered Mount Lafayette when it cleared from its cloud blanket, but all the other mountains are still green.

There were beautiful views around the lake as well, with the dark blue water sparkling in the brisk north wind.  Here is the scene looking northeast towards the Lakeland School.  Old timers around the lake will remember when this was the Wicwas Lodge - maybe even some who remember the Lake Wicwas House?  There is a great history of the site on Dean Dexter's New Hampshire Commentary, "Smith Corner, Lake Wicwas, Meredith NH"   (Click Here).

We also visited Crockett's Ledge, where there are still many yellow trees looking looking over towards Lake Winnisquam.

This large structure - visible with binoculars - on the hilltop looking east towards Winnipesaukee was built in the last few years.  Could it be just a private residence? 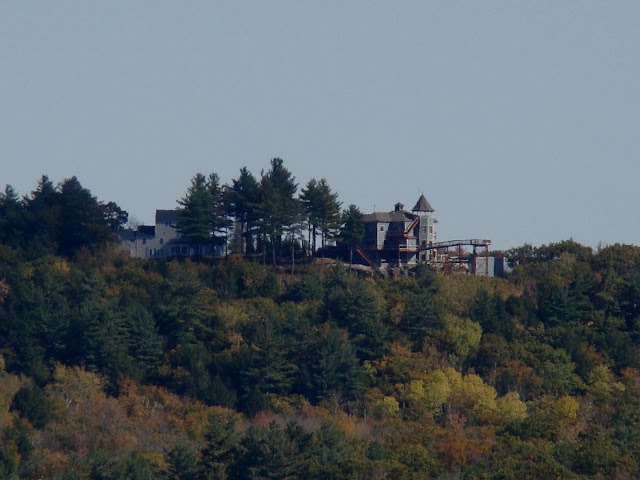 On our hike we saw lots of old tree stumps that are decomposing, and becoming hosts for moss, lichen, fungus, and now even small trees.  These new residents will accelerate the rate of the stump's decay.  Some of them have the appearance of tiny fairy yards. 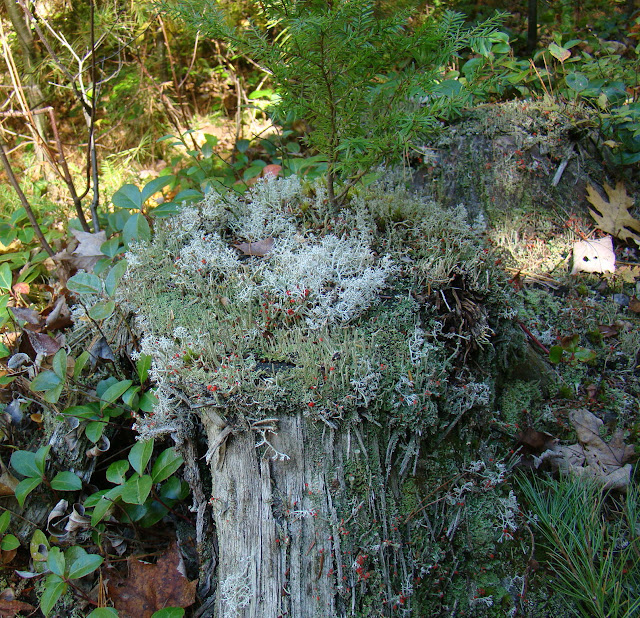 There were lots of animals out enjoying the pleasant day, collecting food for the winter.  Perhaps the first frost got them thinking about the long season ahead.  Or, more likely, it is just that we put the bird feeders back out.  (Risking the bears as well!)  In addition to the usual visitors, we saw the first Snow Bird, and a Purple Finch.

There is still plenty of color around the lake to enjoy! 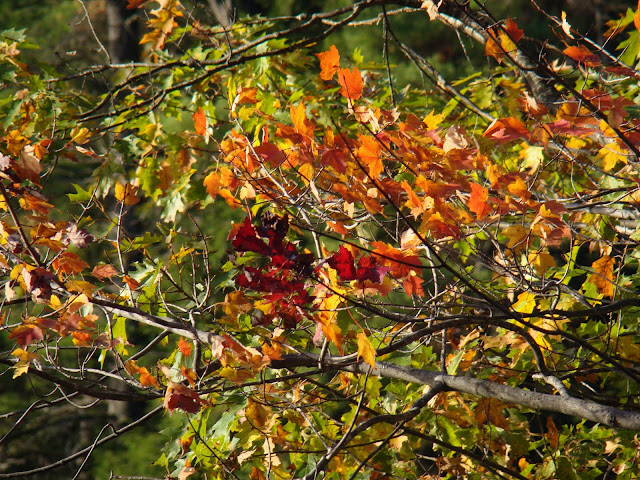 Posted by Scott Powell at 5:44 PM No comments:

After a beautiful late-summer day on Friday, the weather at Lake Wicwas turned back to fall.  I did not see a lot of activity around the lake, but I did see an Osprey, which surprized me, since I thought they had all started their migration by now.  Perhaps this one was coming down from a summer in Canada.  Dave T. told me about the Squam Science Center's project that is tracking osprey with RF transmitters, and it's fascinating to watch their journey.  They have tracked osprey that had their nest right here in Tilton and spent the summer in the neighboring lakes (but they weren't the birds that were at Lake Wicwas this summer according to their maps).  You can follow their migration here:  Project Osprey.  One of the new chicks (Jill) left Tilton on September 11 and arrived at the Amazon River three days ago - including a 24 hour flight from Cuba to South America - a trip of 3900 miles in 25 days!

Back closer to home, the fall colors are near peak in the Lakes Region, and the weather allowed some good leaf peeping.  We took a nice walk along the Winnipesaukee River Trail from Tilton to Franklin;  the water is flowing rapidly in the river, probably due to a combination of last week's rain fall and lowering the lake level in Winnipesaukee.

But the foliage is better right here - these are some of the sights you'll find right on the shores of Lake Wicwas: 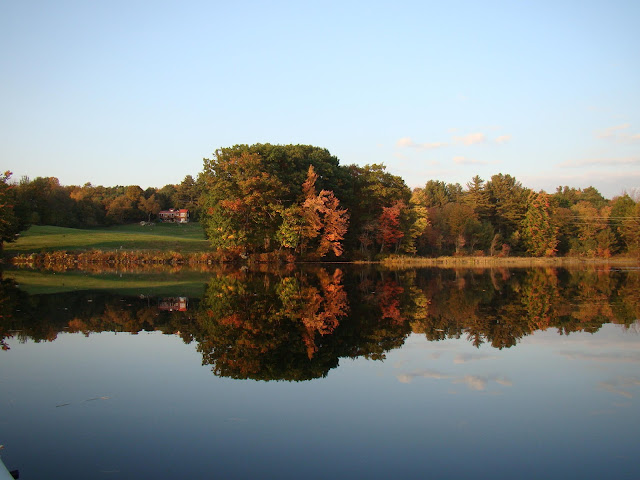 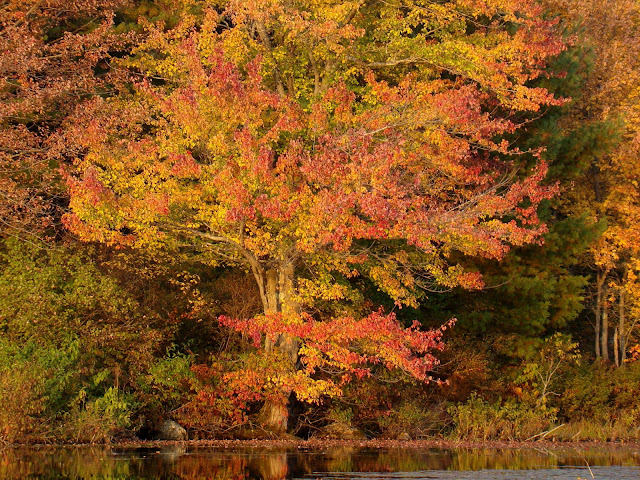 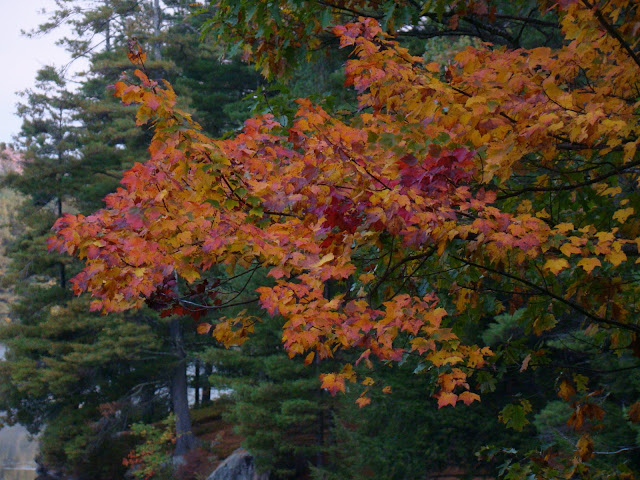 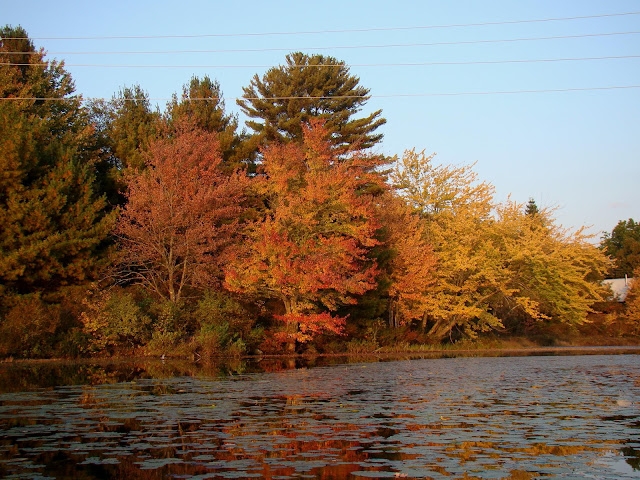 There are still a few brave fishermen out enjoying their trade in the beautiful surroundings. 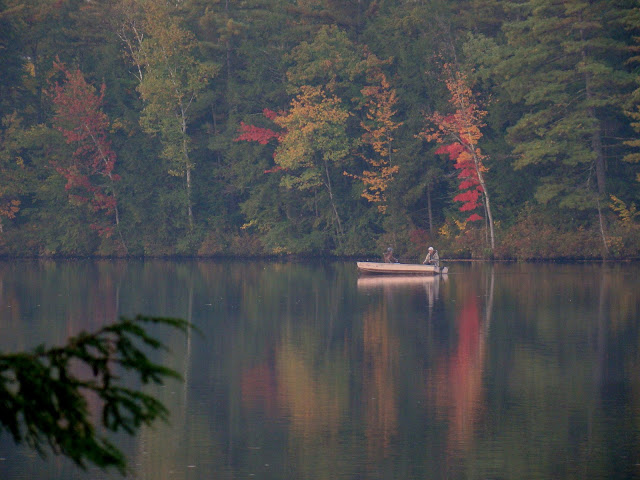 The Partridge Berries and Wintergreen are ripening now, trying to attract some of the attention from the trees above, and providing some bright color right at our feet.
There is also a lovely fall flower blooming now - a tiny orchid with the name Nodding Ladies' Tresses: 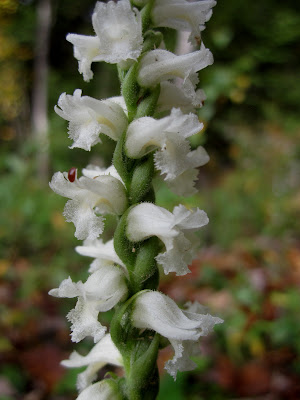 And on a morning walk, the moon was trying its best to draw my attention up above the trees. 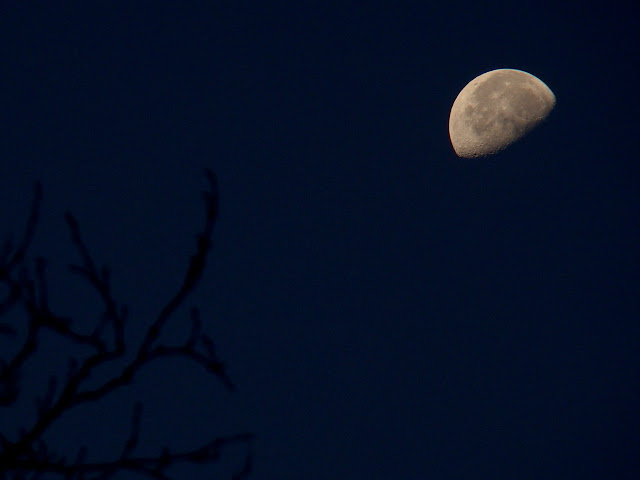 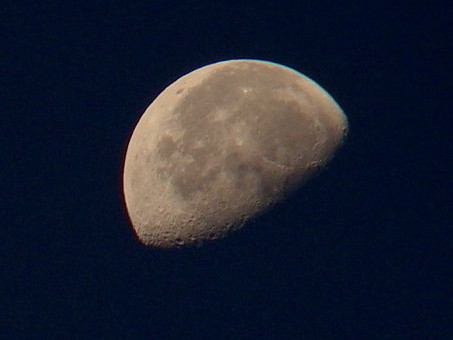 It is amazing to think there is NASA equipment that has been up there for over 40 years now.

I did see a pheasant dart out of a thicket, but there's little chance to get a picture of that bird.  Here's one (sort-of) wild creature I did capture. 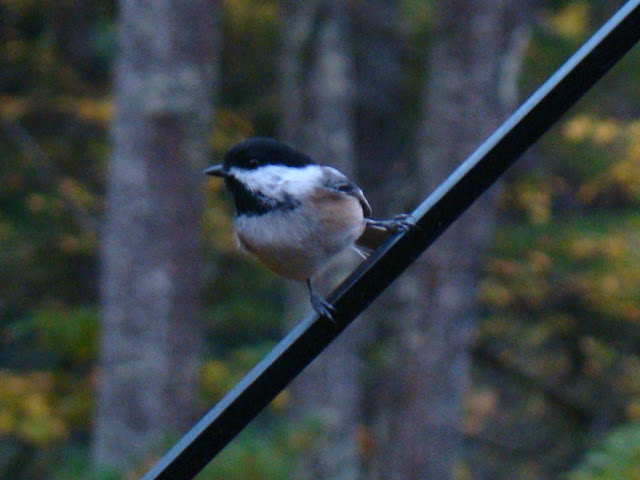 If you've ever wondered if evergreens lose their needles as the deciduous trees do, there's plenty of evidence in the lake  right now.  These are white pine needles that have been shed. 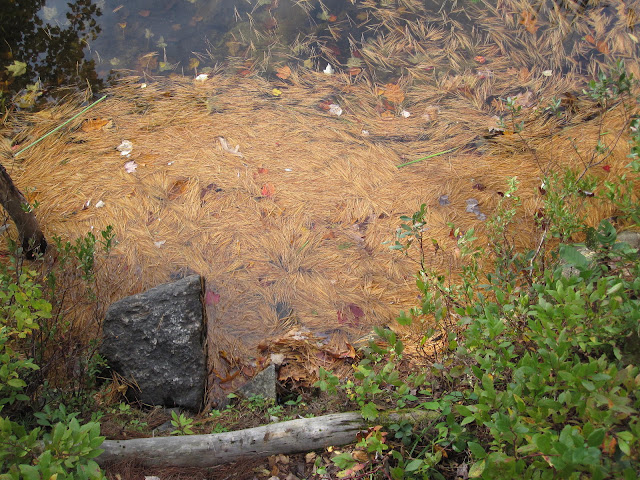 They are also forming a soft, quiet carpet in the forest at the moment.

Enjoy the autumn splendor while it lasts! 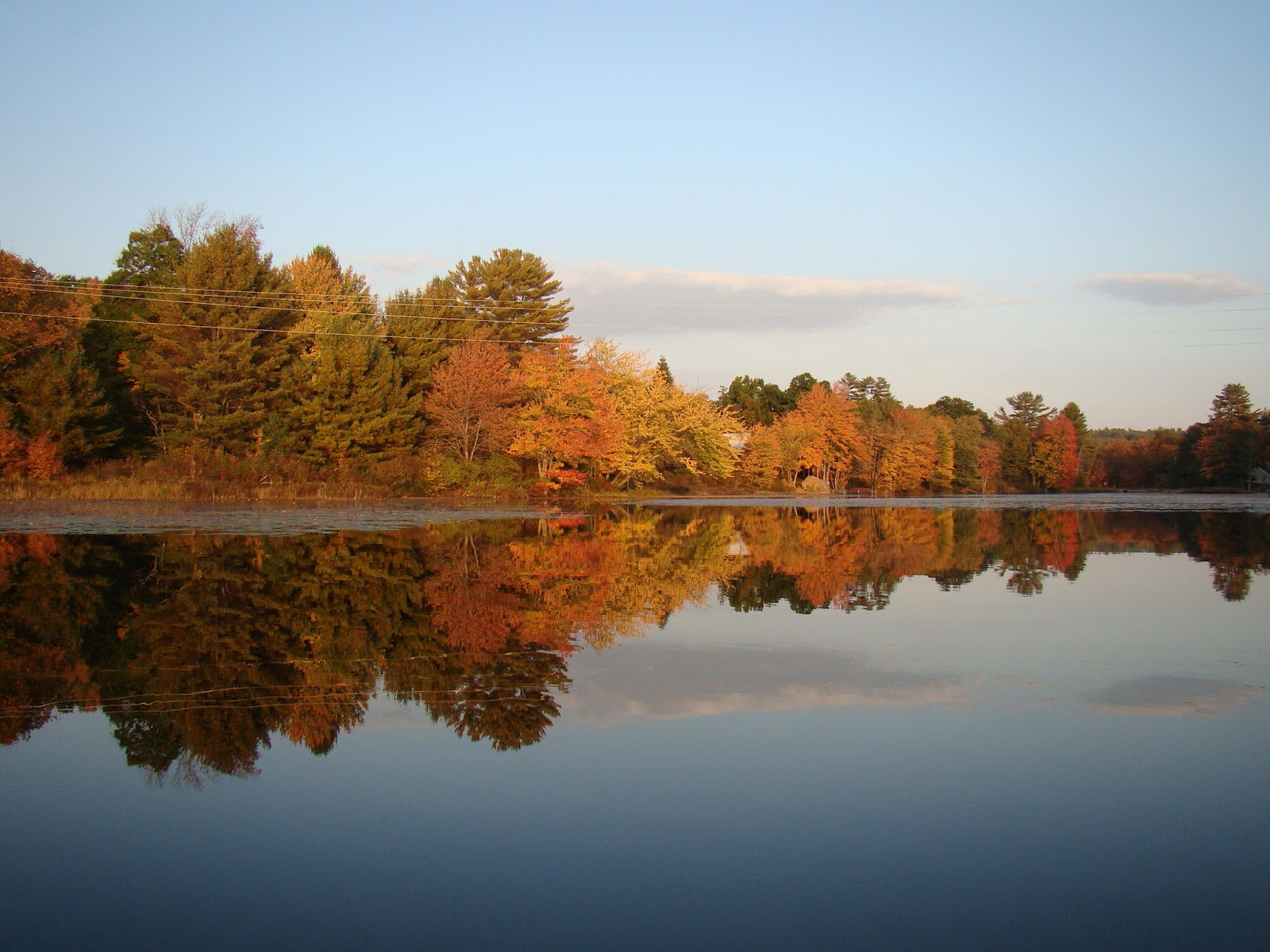 Posted by Scott Powell at 8:20 PM No comments: