Well, who knew that when I left for Colorado to get some skiing with the family, I'd come back to New Hampshire and find Spring!  I guess I missed summer - the report was it hit 82 degrees, but today it's back in the 40's.

I never expected to miss ice-out;  just two weeks ago the ice was 13 inches thick.  But Tom C. reported that, in what may be the warmest winter ever, Lake Wicwas had ice out on March 22nd!  Lake Winnipesaukee ice out came just one day later on March 23, setting a record for the earliest ice out by one day.  The previous record was March 24, occurring in 2010 - two new records in two years - global warming anyone?  Tom also saw the first blue heron of the year just today.  Perhaps those snow fleas knew something the weather forecasters couldn't predict.

So, I missed the entire coming of spring in the 2012 - no pictures to share.  We'll probably get a blizzard in April, so maybe I'll get another chance.  But at least it was still winter in Colorado - here are a couple pictures to prove it!

Posted by Scott Powell at 9:41 PM No comments:

Even with a few more inches of snow this past week, signs of spring are becoming abundant.  The brilliant white snow and warm sunshine made for beautiful spring days, and melted the new snow quickly wherever it had southern exposure. 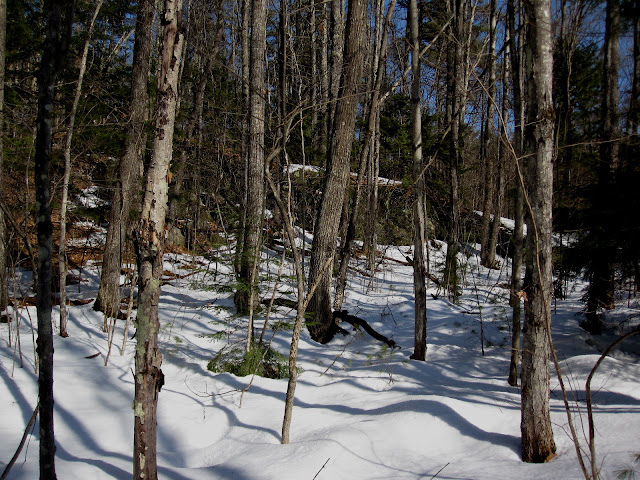 The streams are flowing well with snow melt now, but there is still enough snow cover to form bridges to cross over them if you travel up or down stream a bit. 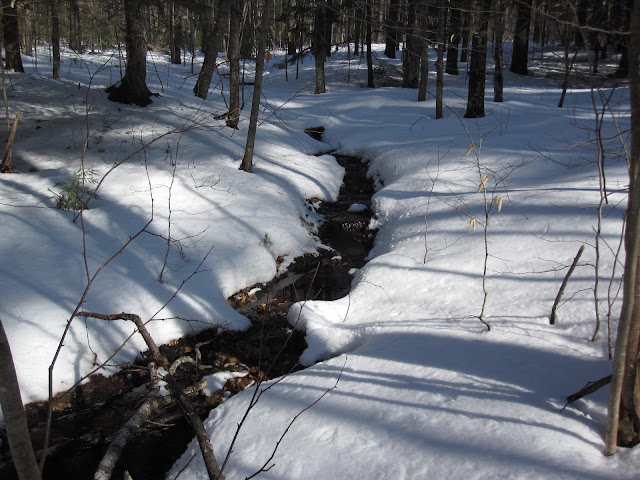 In a field there were a few well-melted tracks I couldn't identify, but following them into the woods it became clear it was a turkey - or actually four of them.  I've seen their tracks around the lake only a few times this winter. 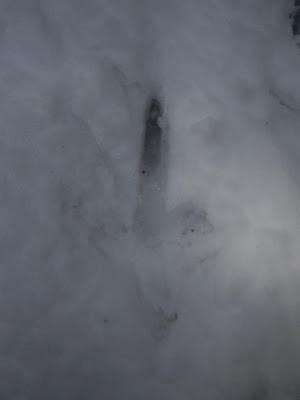 A sure sign of warm weather - if not necessarily spring - are the snow fleas.  I've seen these tiny insects as early as January, and as late as May depending on the temperature and the depth of the snow pack. 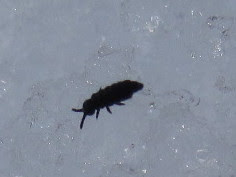 Then along the lake edge I came across a set mink tracks that followed along my ski trail from last weekend.


In this print I could just barely make out that there are two paw imprints in each footprint in this "2 by 2" trail.  The front feet land first, and then the rear feet land right on top of the front prints. 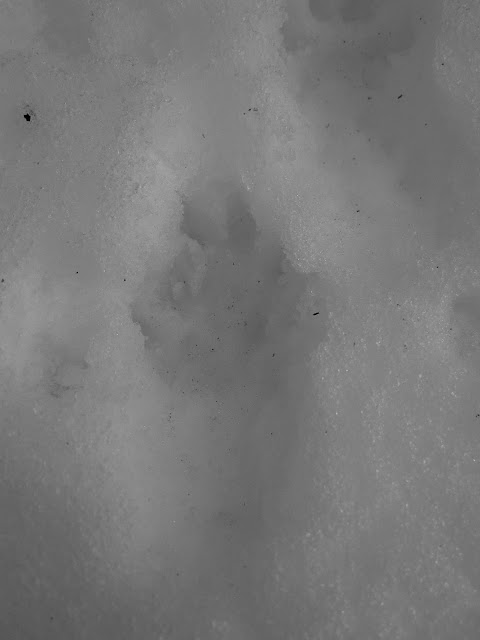 An audible sign of spring was the honking of Canada geese, as a group of three flew over the lake looking for enough water to take up their summer residence. I wonder how many will make Lake Wicwas their home this summer....

I also came upon yet another interesting beaver tree.  It must have been an inexperienced beaver that took this one down, as it didn't cut enough away on the lake side, so it split high up on the trunk, leaving an interesting landmark on the lake. 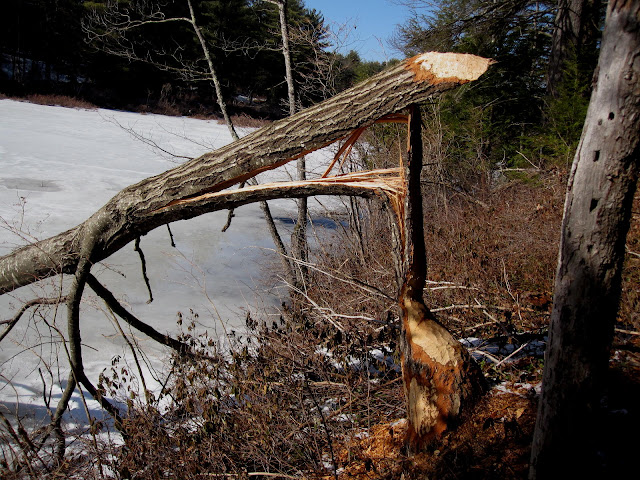 And even when you think you're surrounded by wilderness, signs of humans jump out at you.  I was standing right next to this tree stand before I even realized it was there.  I wonder if this hunter did as well as the coyotes  this year. 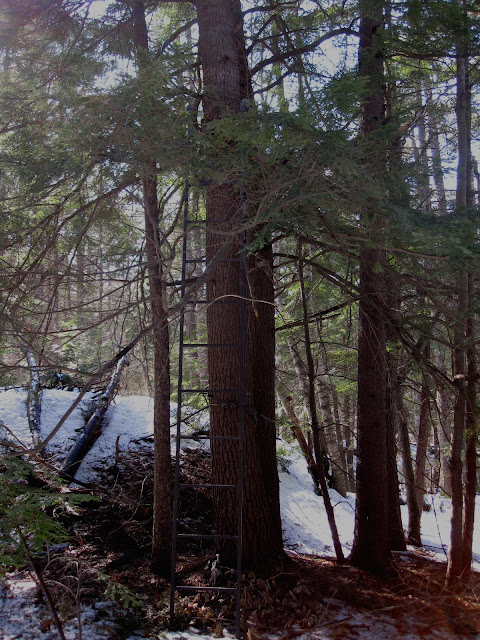 One other great sign of spring today:  the sugar shack on Chemung Road was boiling!  Fresh maple syrup will be ready soon;  I'm already thinking about this summer's blueberry pancakes!
Posted by Scott Powell at 9:54 PM No comments:

Now that spring (meteorological spring that is) has arrived, mother nature decides it's time for winter.  Thursday brought the biggest snow fall to the area since Thanksgiving - nearly a foot of light, dry powder. 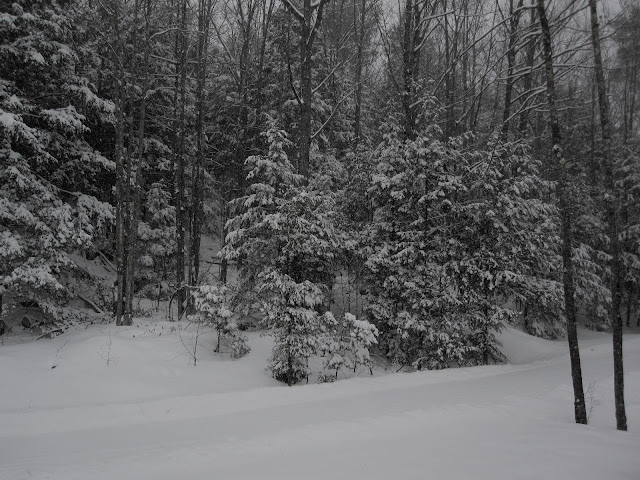 I took only my second cross-county ski trip around the lake, and the last one was in October.  Yes, I haven't skied since the Halloween snow, meaning I missed November, December, January, and February!  Actually, there were a couple of times I could have gotten out, but it would have been pretty thin with lots or portages around bare spots, and rocks to damage the bottoms of the skis. 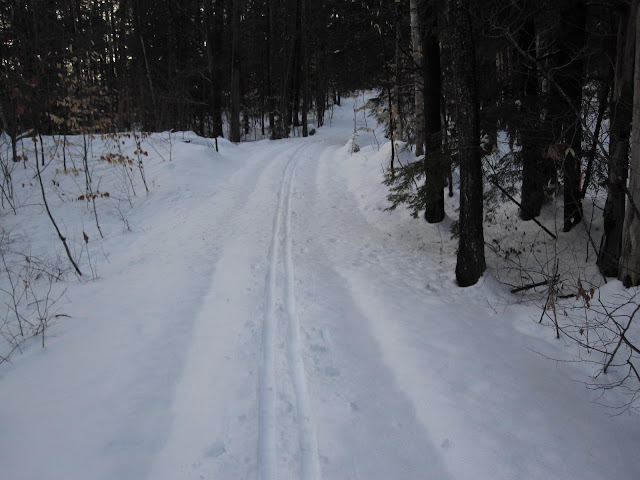 Saturday was back to warm weather, and late in the afternoon a few peeks of sun came out to brighten up the winter scene. 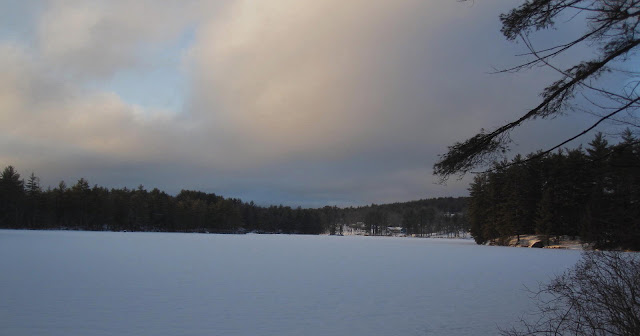 By evening, there was bright moon light, and with low ground fog it made for a very eerie feeling.  The world was well lit, but looking into the woods or across the lake was like peering into a haunted forest.  There was also a nice astronomical show - Jupiter and Venus are close together in the WSW evening sky, and will continue to get closer for a few more weeks before they start to separate.  If you look within an hour of sunset, you can also see Mercury just above the horizon.  Finally, Mars, which on Monday makes its closest approach in its two-year dance with Earth, is also visible in the eastern sky early in the evening,

We have had more goldfinches than usual this winter - perhaps due to the warm weather.  We usually see only a few goldfinches, and lots of chick-a-dees, but this year has been the exact opposite.  The snow storm brought them out in full force, sometimes there were seven or eight on the feeder at once.  The snow birds (juncos) appreciate all their dropped seeds. 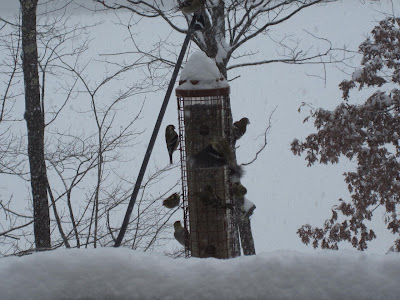 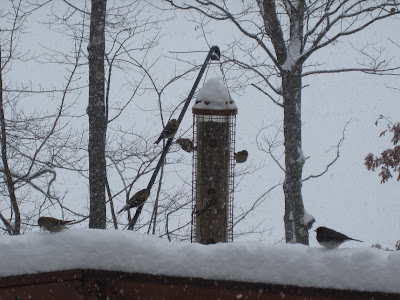 Unfortunately, rain came on Saturday to saturate and pack down all that nice light snow.  Then the cold night froze everything up, so we had a rather noisy snow shoe trip on Sunday morning, though on the lake the sun had softened things up.  We saw only a few tracks, as most animals could walk easily on the frozen crust.  We did find quite a few little tufts of lime-green lichen that were blown out of the trees when last night's cold front came through with strong wind gusts.

This looks like a Usnea lichen, so named because it contains usnic acid.  Usnic acid has anti-biotic properties, and has been used medicinally since ancient times.  So if you're ever stranded deep in the wilderness with an injury at risk of infection, just look for this little lichen. 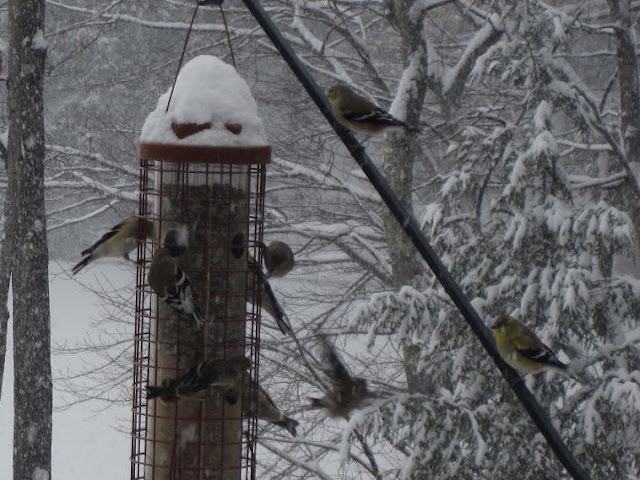 Posted by Scott Powell at 4:21 PM No comments: