It was a wet week around Lake Wicwas with almost two inches of rain falling on the lake.  Nonetheless the water level continued to drop as the dam has been lowered and water is flowing rapidly from Lake Wicwas, through Meredith Center, and into Lake Winnisquam.  The lake is six inches below full level and a lot of typically unseen shoreline is visible. The rain and wind drove yet more leaves from the trees, leaving mostly brown oaks and beech. 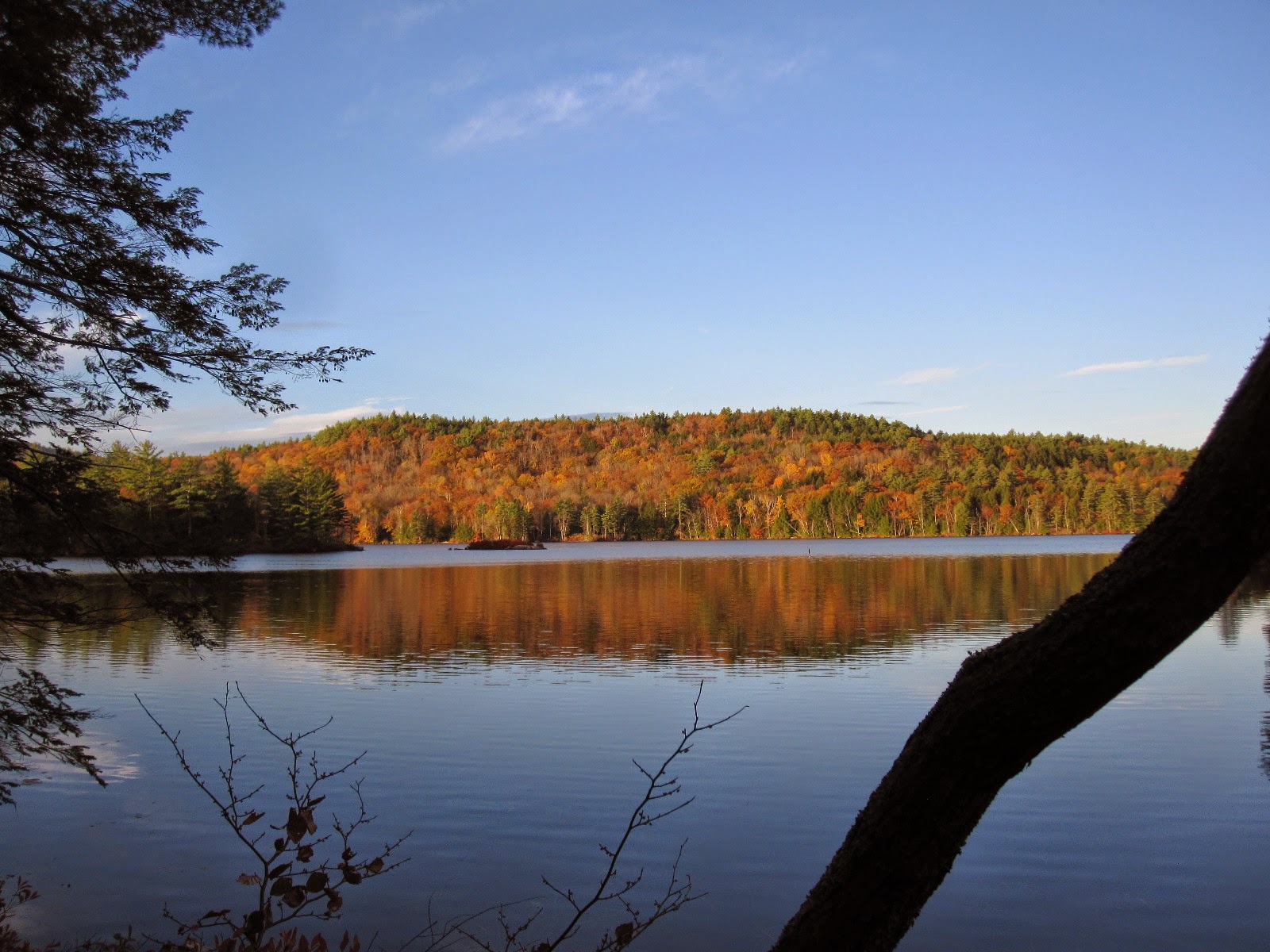 The occasional green tree stands out in contrast to its drab surroundings. 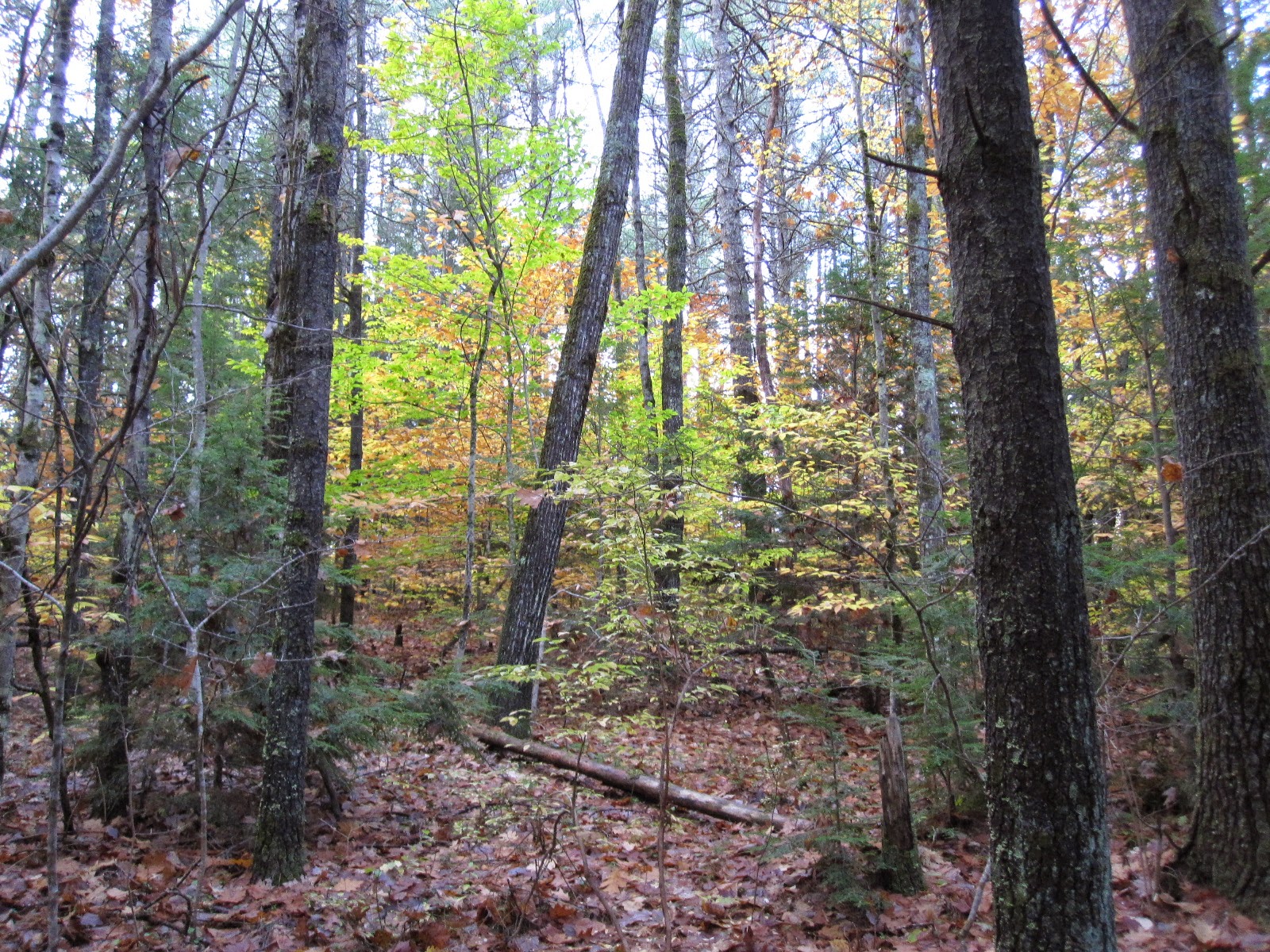 The White Tail Deer have started the fall rut and I have come across a couple groups of four or five deer that a buck has probably rounded up.  I have also seen a few scrapings on the ground where a buck is marking out its territory.

Other than this, it was a quiet week for wildlife around the area.  There were a few more Wood Ducks on the lake, and I heard at least one loon still on the lake.  I did notice an old rotten tree that had been ripped apart by something.

Could it have been a bear looking for insects?  It's more than a woodpecker usually does, and there are no wood chips around.

A couple of weeks ago we took a trip up to the Sky Pond State Forest.  This is a beautiful State Forest right near-by in New Hampton with geology and an ecosystem very similar to that of Lake Wicwas.  From the parking area it's a short hike to a ledge high on the west side of Lake Winona, very much like that on the west side of Lake Wicwas.  It is a common formation created by glaciers as they scoured the earth moving south over what is now the Lakes Region.

From the ledge one can see Lake Winona, Lake Waukewan, Hawkins Pond, and even a bit of Winnipsaukee.


There are also nice views of Mt. Chocorua, the Rattlesnakes, and the cliffs on Mt. Whiteface.

This is an easy hike that I highly recommend.  You can find driving directions and details of the hike here.


Posted by Scott Powell at 6:54 PM No comments:

Heavy rain and strong winds have taken their toll on the trees around Lake Wicwas;  there are still a few pretty sights left, predominantly in the deeper yellows of the oaks.  Most of the maple leaves are now lying on the ground, getting ready to provide nourishment for next spring's wild flowers. 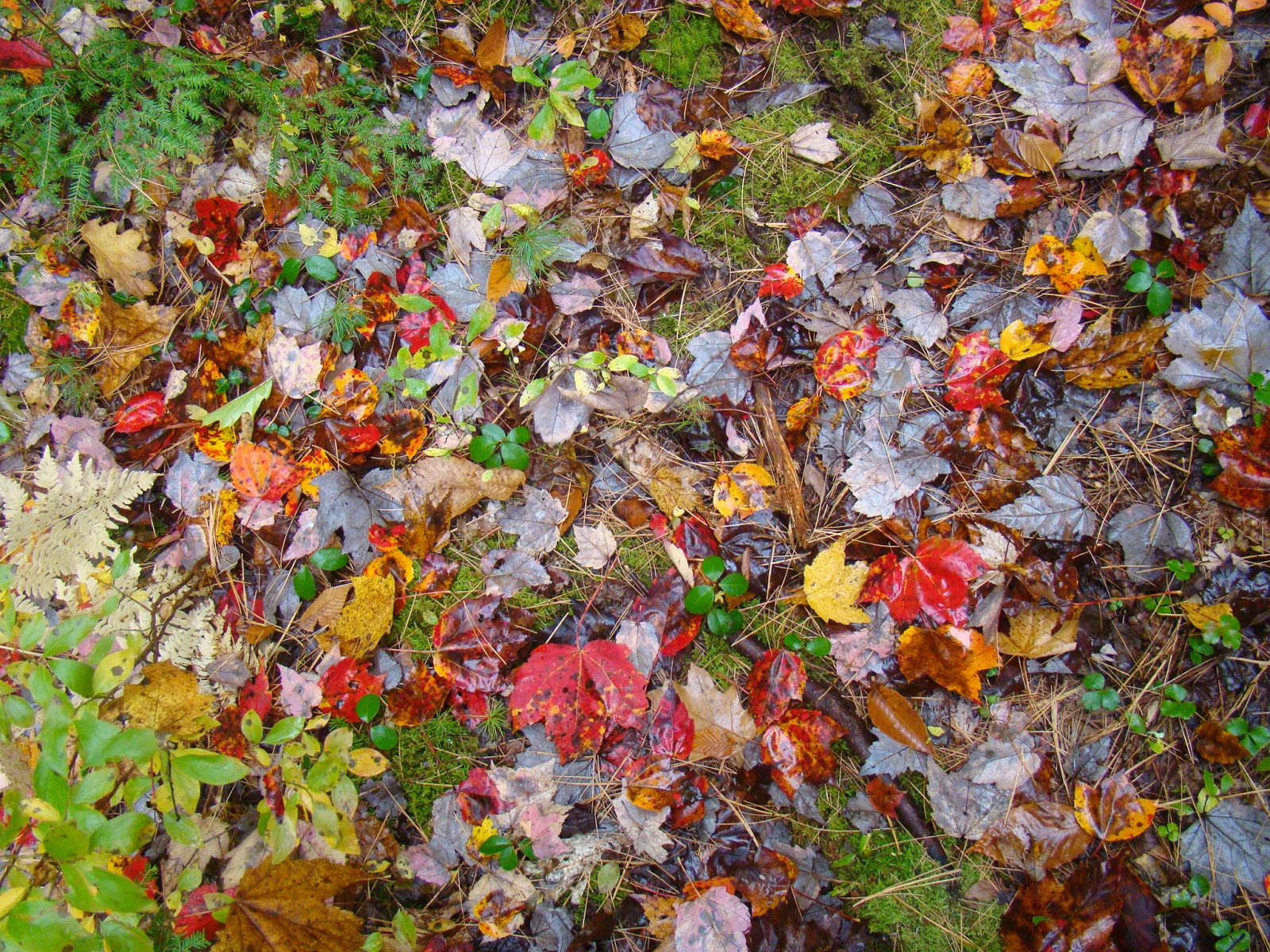 On a walk along Chemung Road one morning, while appreciating an unusually hued maple, 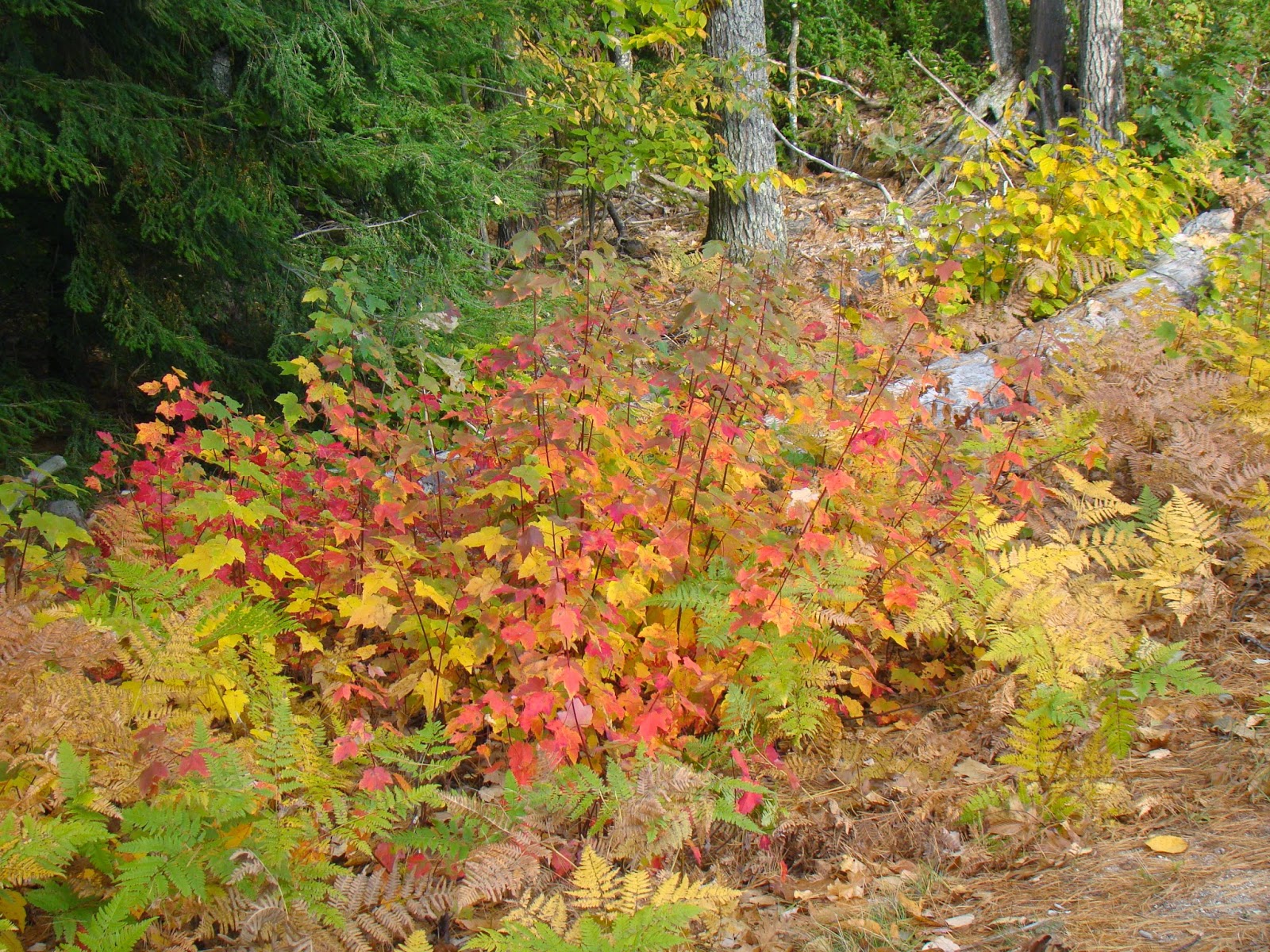 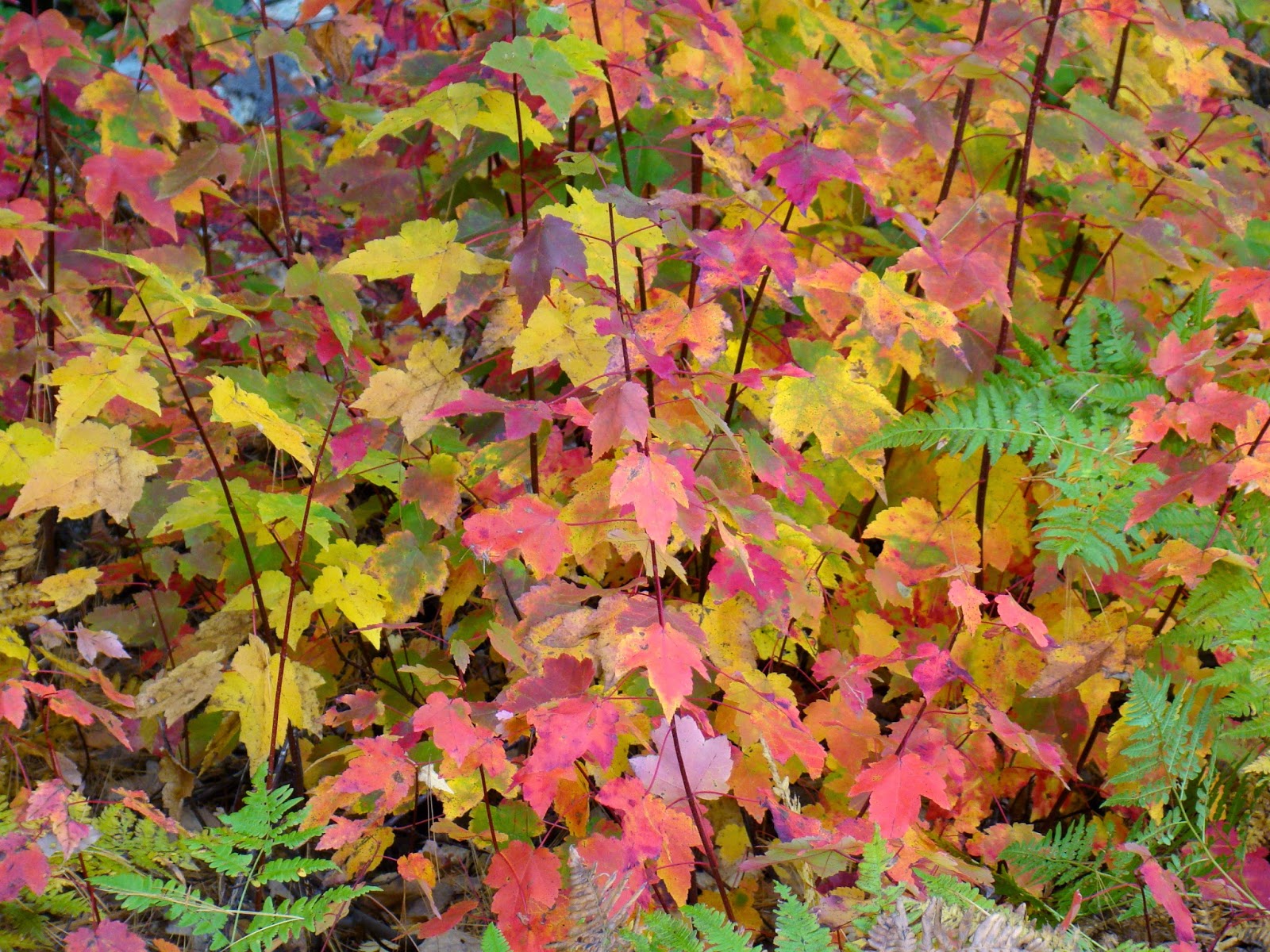 I noticed birds flitting out of the branches, and landing on the ground right at the edge of the pavement.

They had found a good supply of seeds that they were feasting on, fattening up for the coming winter. 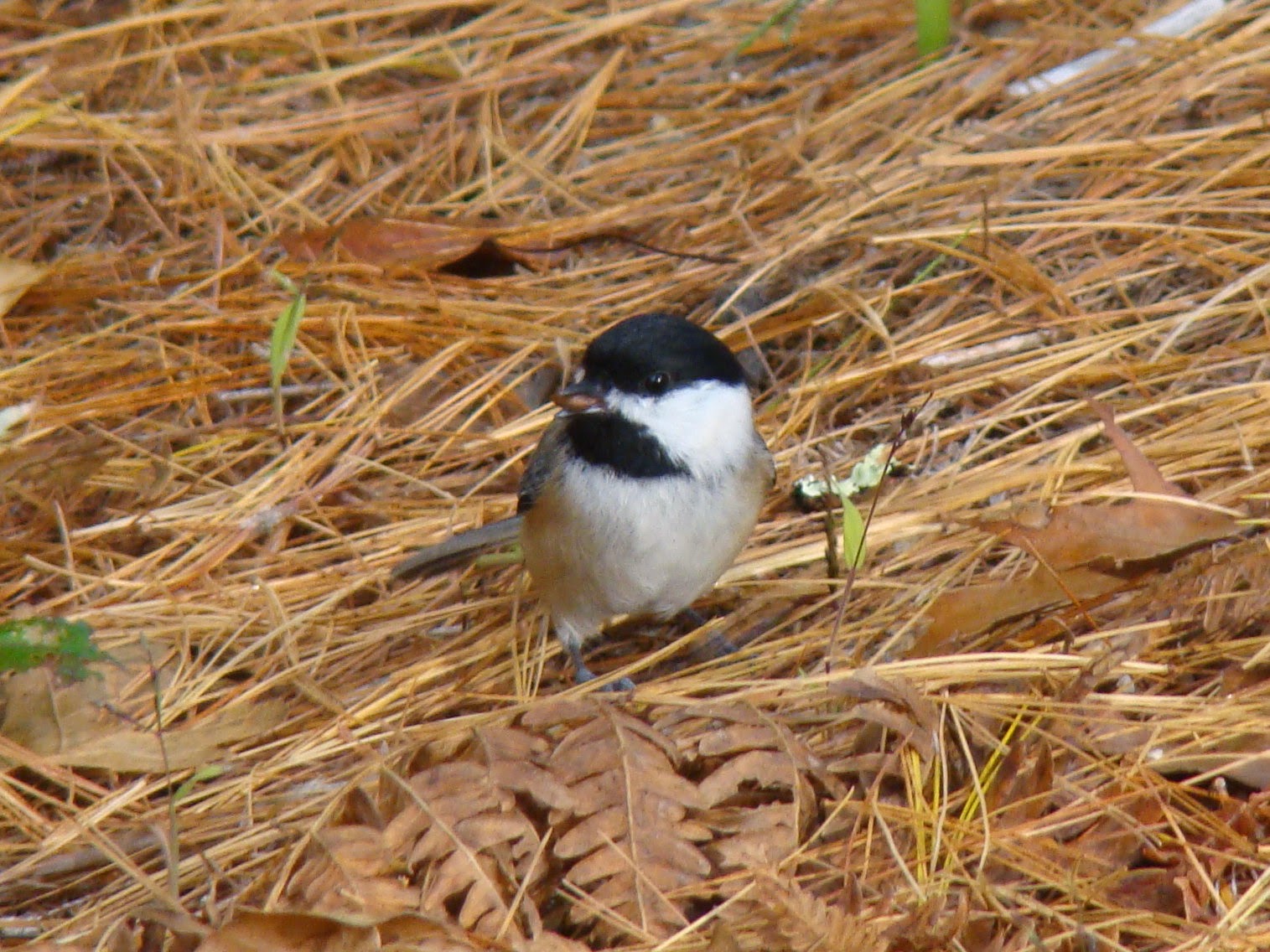 I think it likely they were white pine seeds that had been liberated from their cones by cars driving over them on the side of the road.

On the opposite side of the road were the tracks of several deer that must have passed by that morning.

I have put out the trail camera a few nights recently, and though I haven't captured any deer, I do continue to see the gray fox most nights, passing in both directions on its hunting trips. 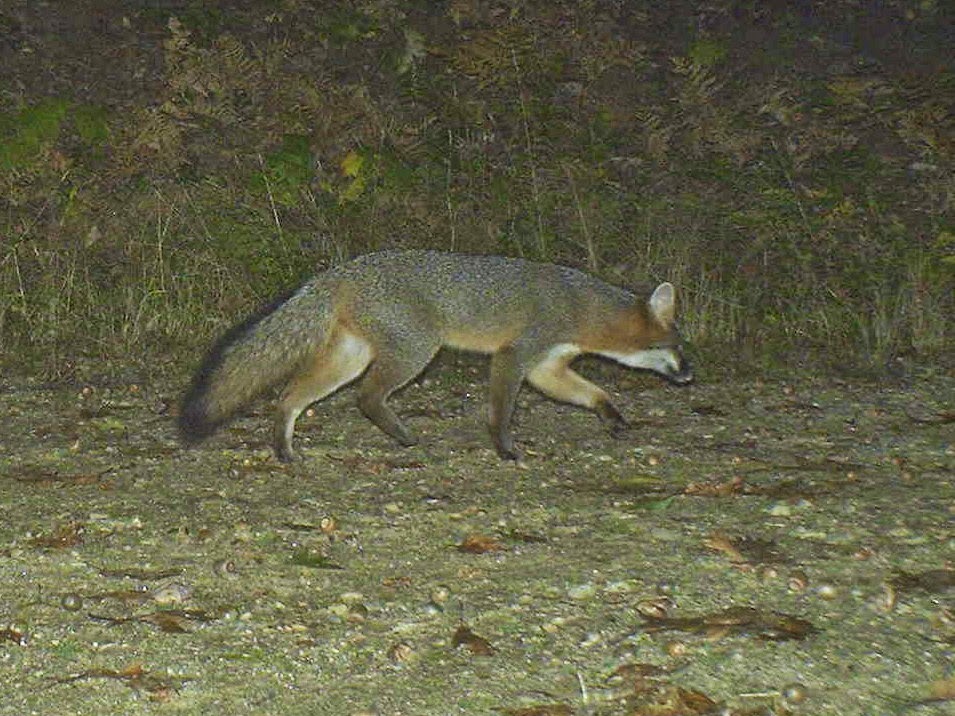 The very same morning I saw (and smelled!) a fluffy little skunk waddling along the side of the road. 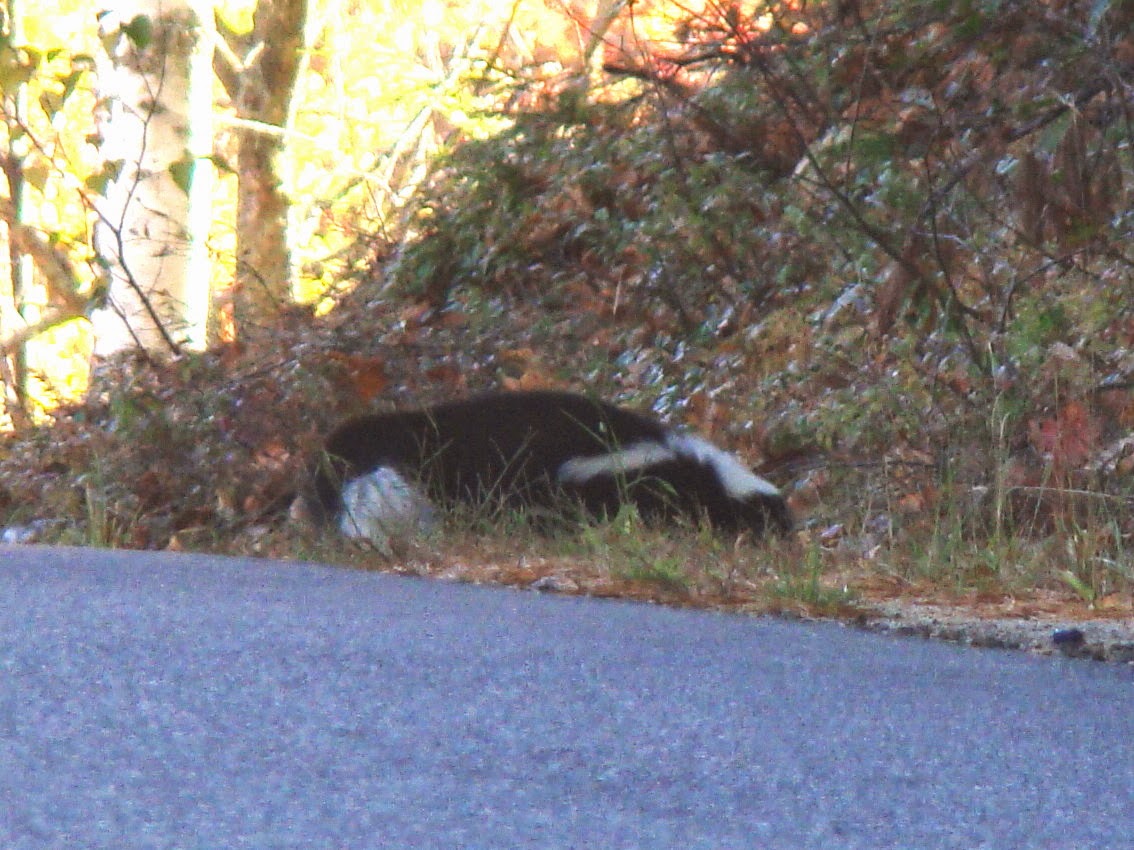 Autumn is good time to see nature!  I resisted the urge to get a closer picture....

The fog hanging over the lake was thick that morning, but now and again it would lift enough to see part way across, revealing a solitary creature out getting its breakfast as well. 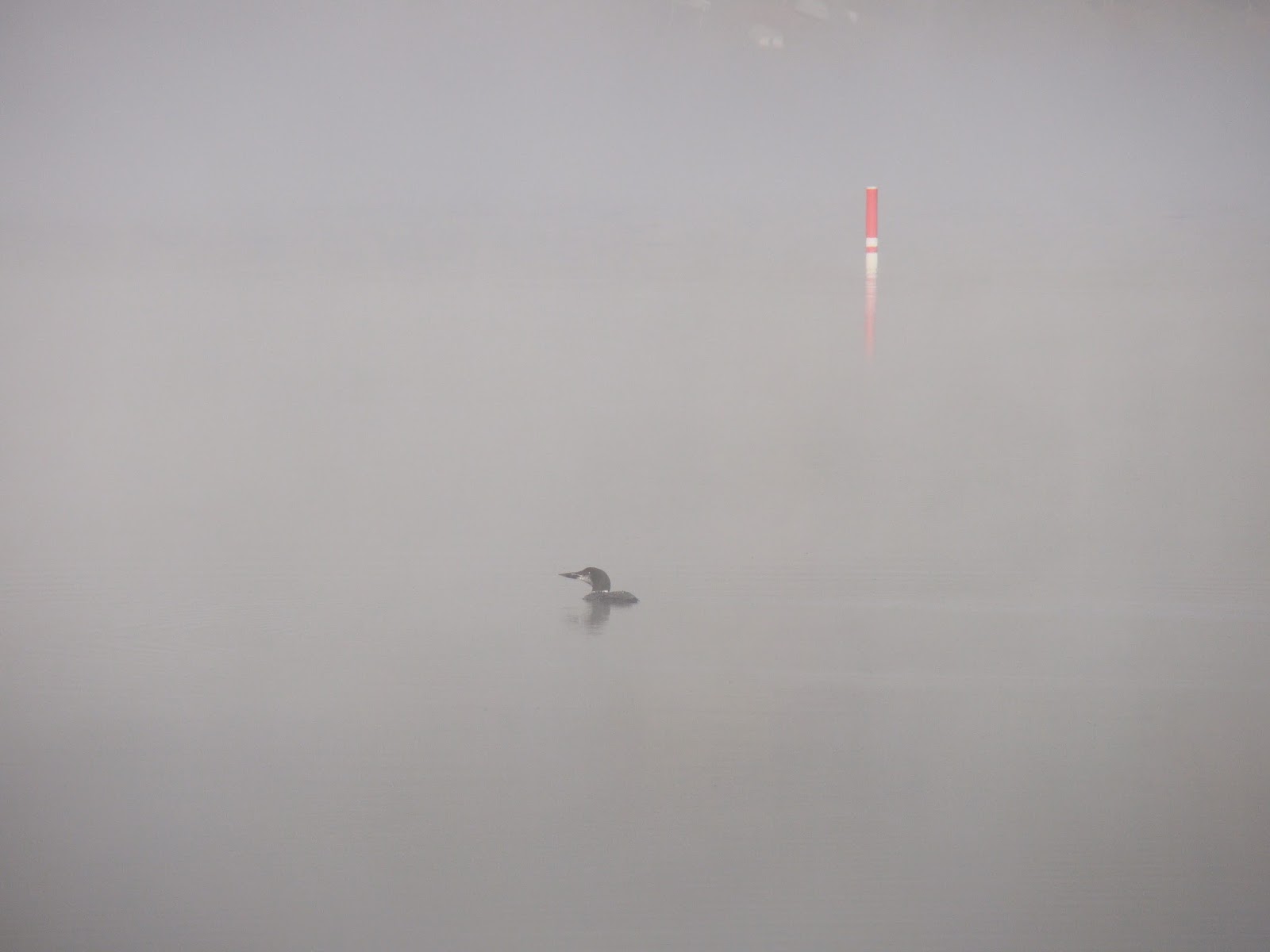 This looked like an immature loon, perhaps our chick, but in the middle of the storm on Saturday I saw two loons out fishing in the rain.  One looks like an adult, but with the gray sky and rain in the air I can't be sure  - they both look rather mottled and gray. 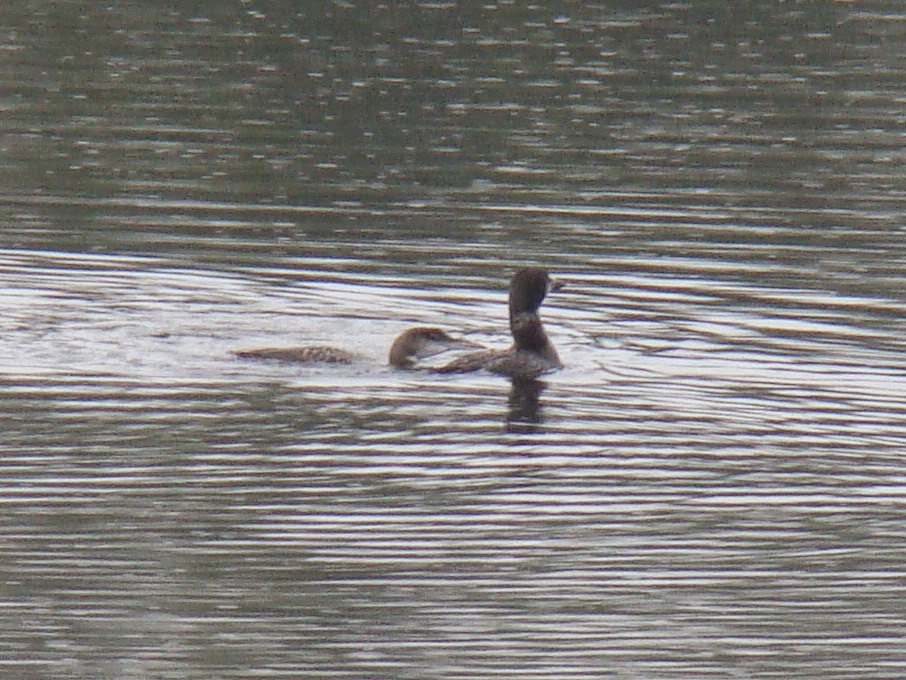 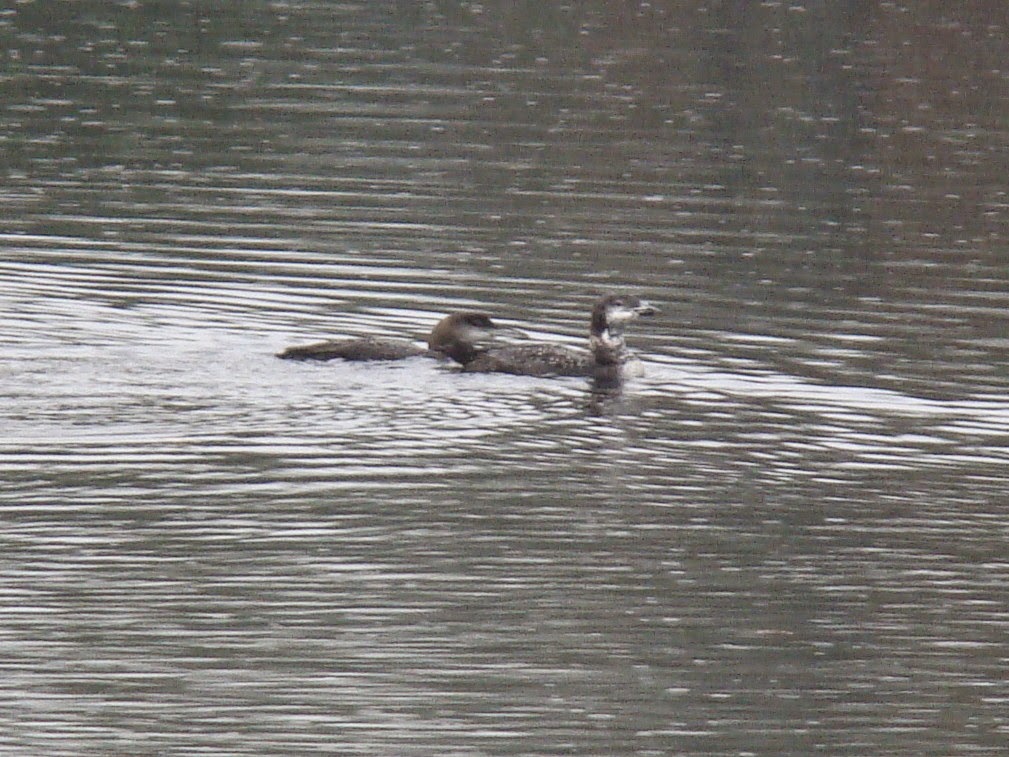 The Wood Ducks must also have started their migration, I have seen several on the lake.

With more wind and cold temperatures tonight, maybe even a hard freeze, this may the last of the colorful offerings of 2014's fall season. 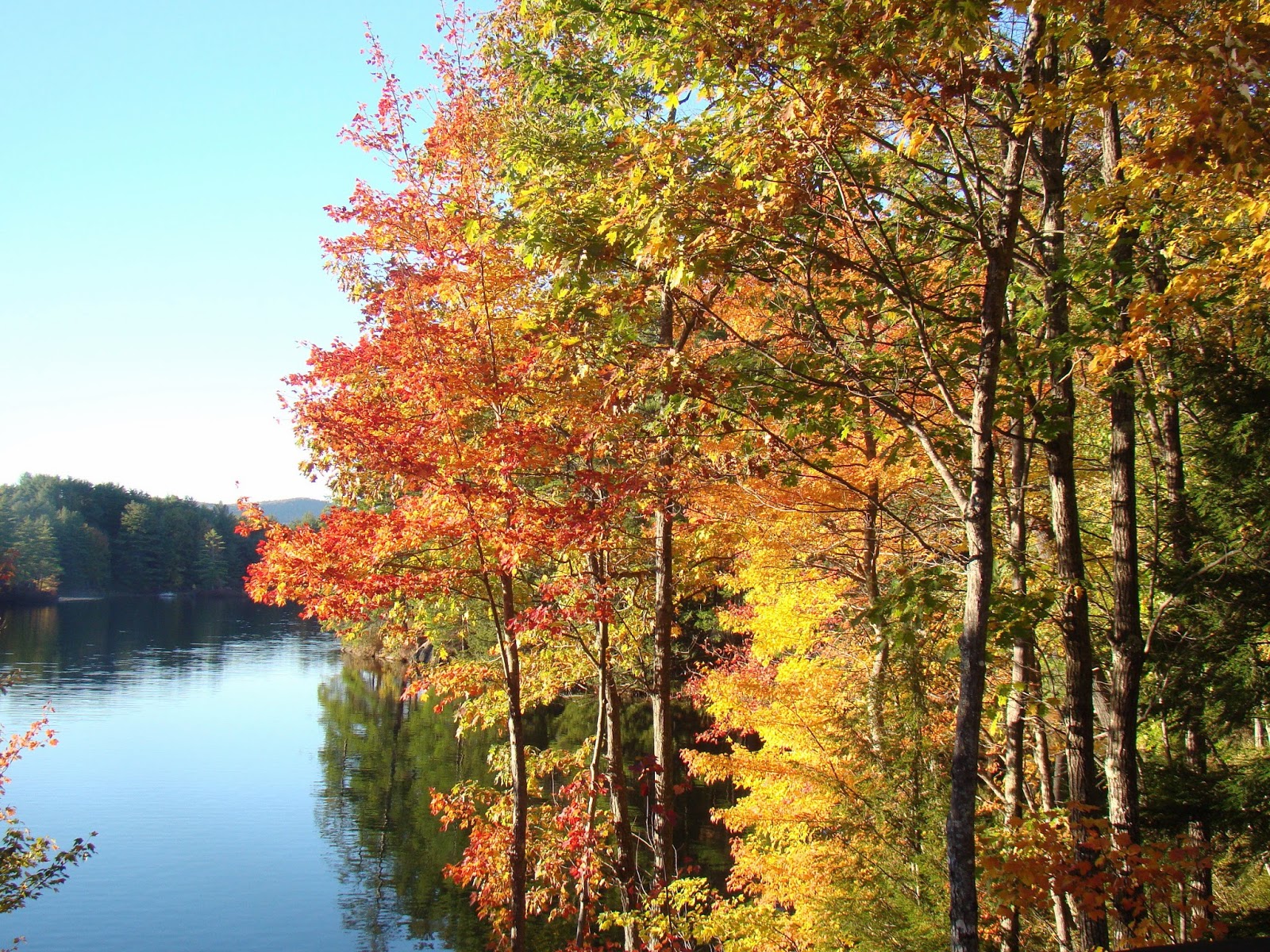 Posted by Scott Powell at 10:29 PM No comments:

Email ThisBlogThis!Share to TwitterShare to FacebookShare to Pinterest
Labels: Skunk

It's Columbus Day weekend and the fall colors are peaking right on schedule around Lake Wicwas.  The maples are deep red and orange, and the beech are starting to turn bright yellow.  The small deciduous trees right along the shore provide a brilliant contrast to the dark green of the pines behind them. 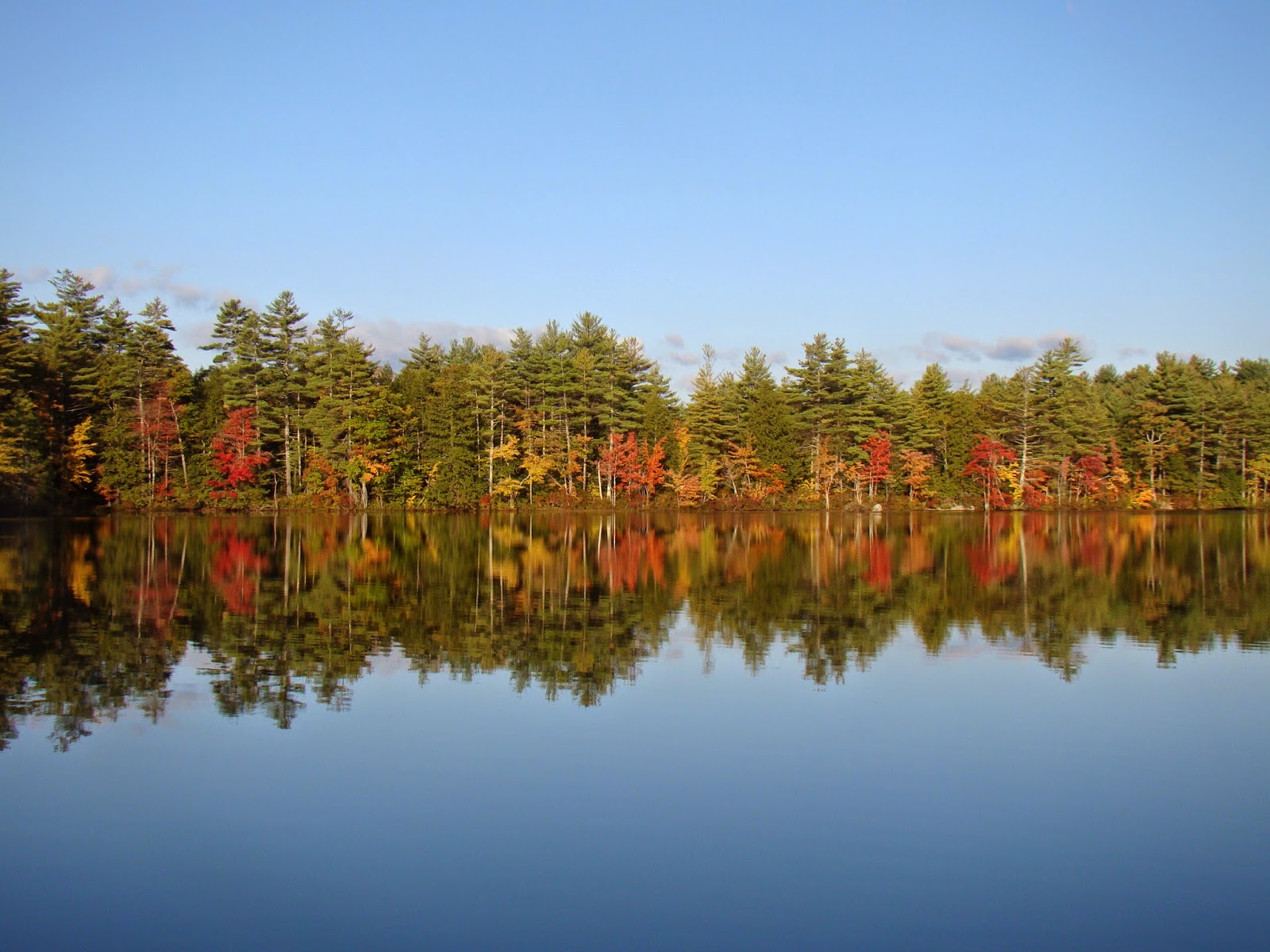 A couple of rare Black Gum trees add to the variety of hues.

I have heard the loud report of shot guns just before dawn this past week, as duck season is now open.  The hunters are on shore and on boats, getting positioned before day-break to get the first shot of the day.  I know they've been on land when they leave an unfortunate calling card. 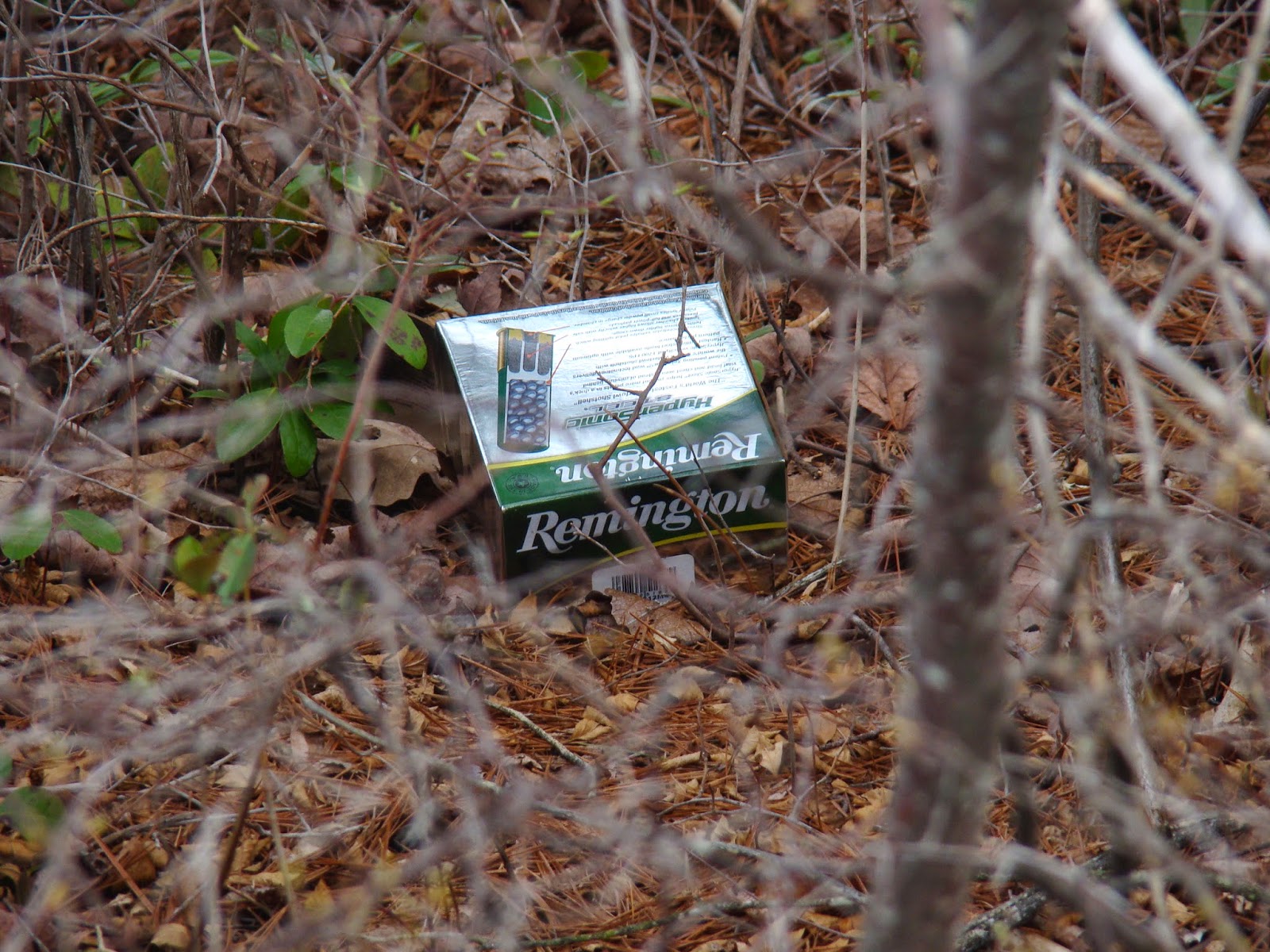 It's too bad one careless hunter can hurt the reputation of what are usually careful users of property.

But they haven't found all the birds, as I often flush out a group of ducks when I walk along the shore, and I caught this group out for a fall foliage tour. 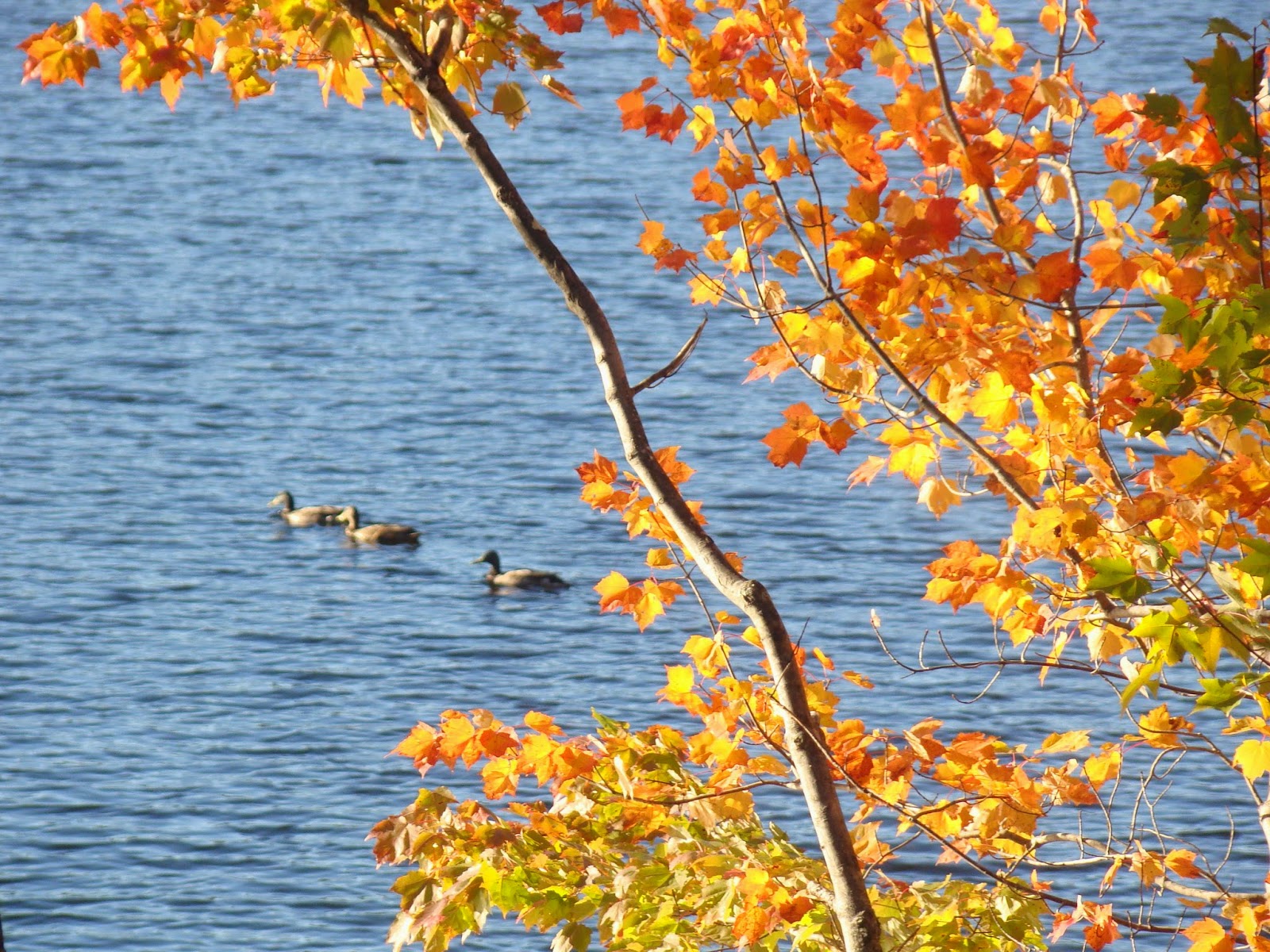 The water is getting cold, but it is still warm enough to put off mist on a cold morning. 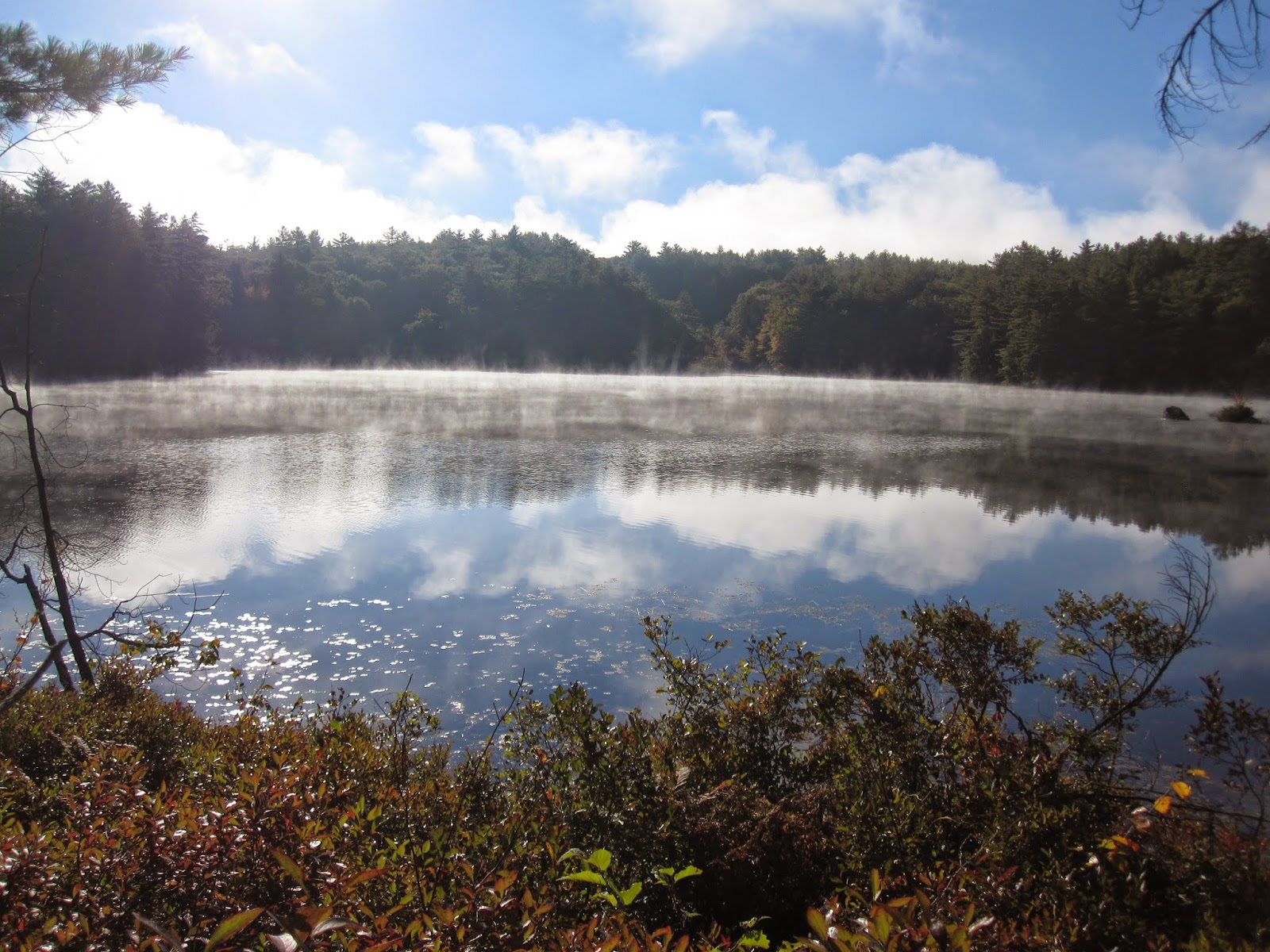 One day there were unusually tall, thin columns of mist reaching up to the sky. 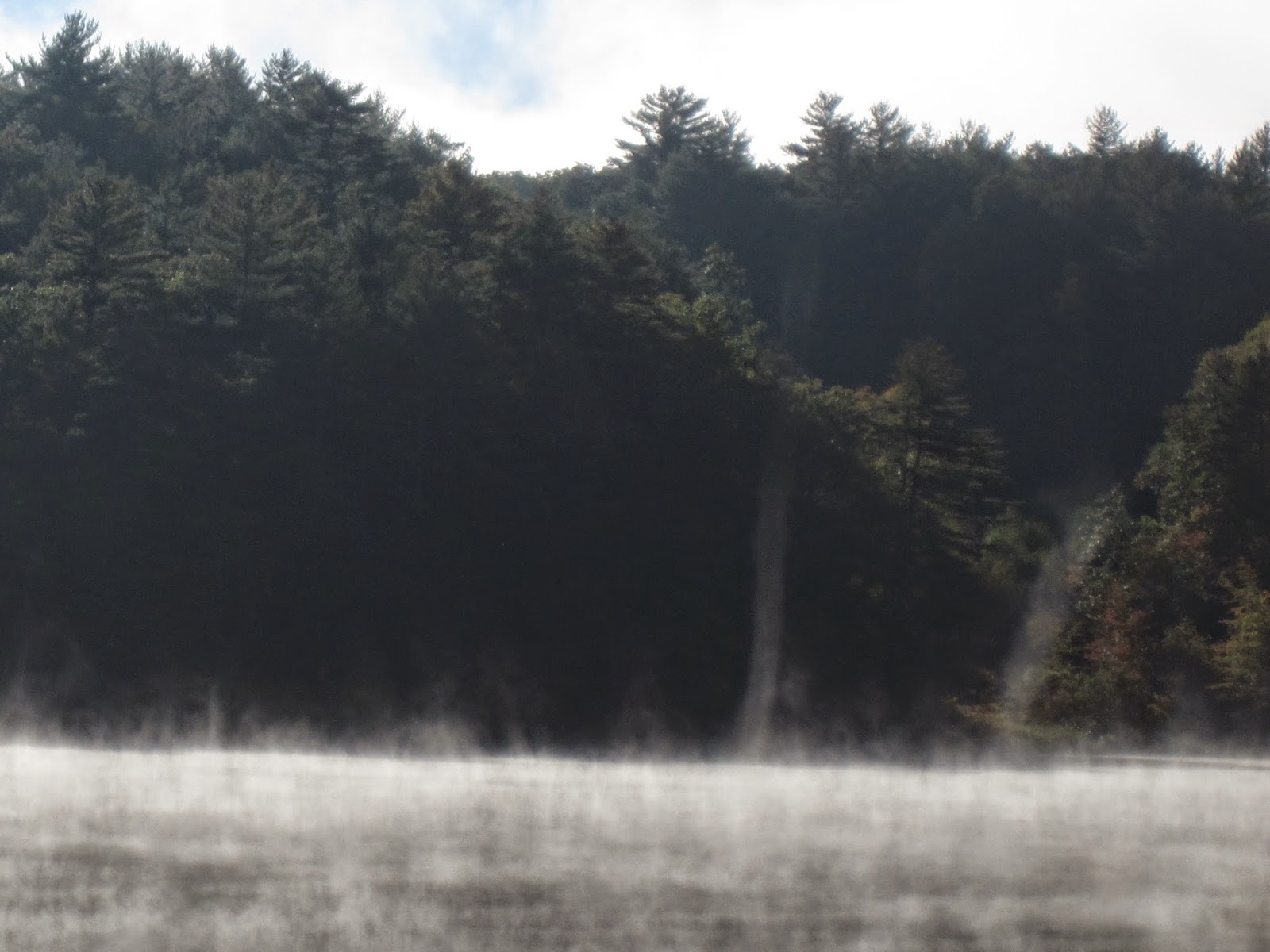 The cause of this phenomenon is unknown to me.

In what is yet another warm fall, Lake Wicwas had its first frost just last night, and then only in open areas with no trees overhead where radiational cooling allowed the temperature to drop just below freezing.  Only the smallest of leaves raised just enough off the warm ground showed any frost. 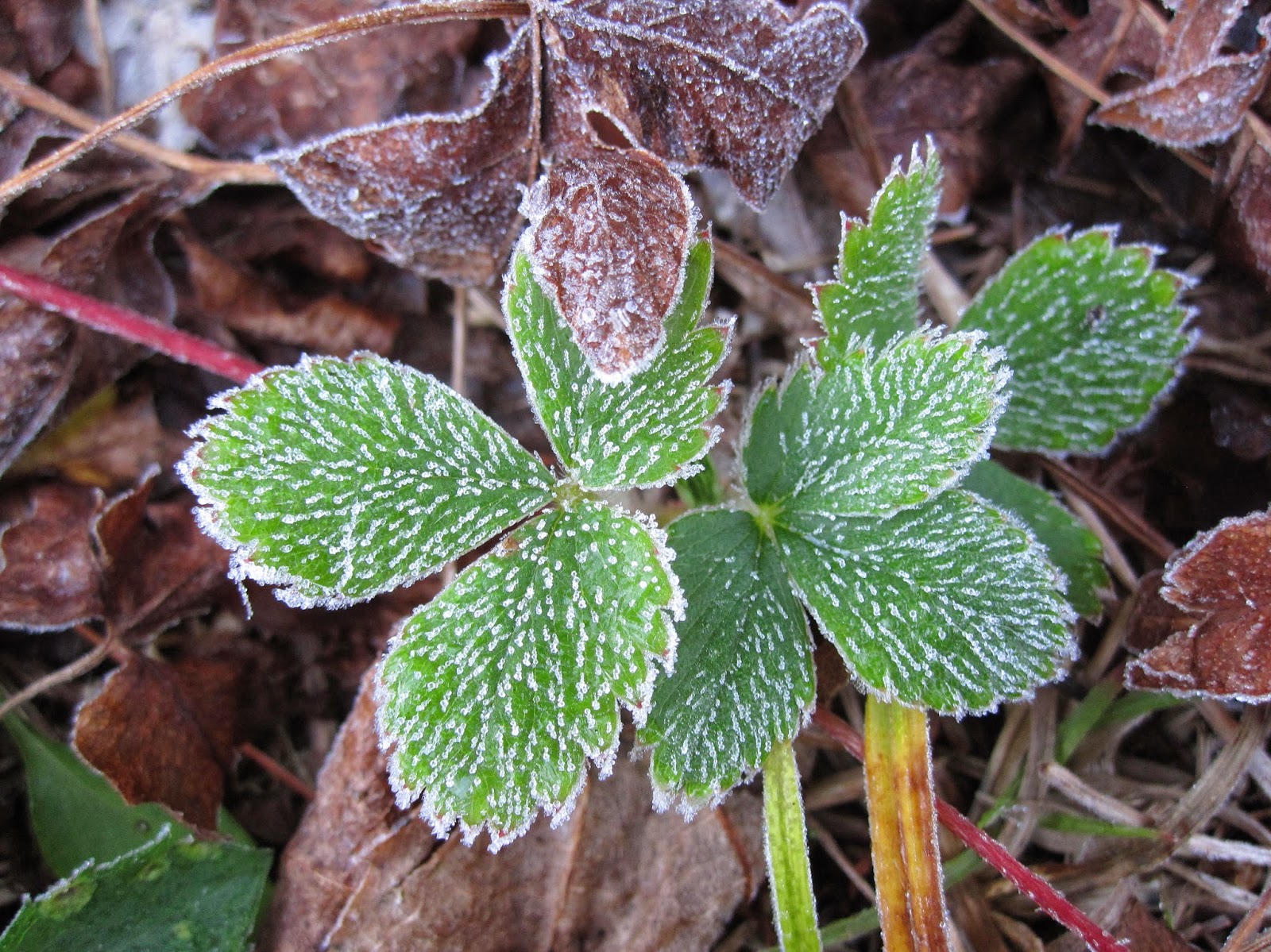 There has been an abundance of acorns this year, with large, heavy nuts covering the ground under the oak trees.

I heard a science report explaining why two or three years of low acorn production is followed by a heavy crop (called a mast year).  If the oaks generated the same number of acorns every year, the animals that eat them - squirrels, mice, deer, turkey - would reach equilibrium with the crop, where there would be just enough animals to eat all the nuts.  But this would mean very few seeds survive to germinate.  So the trees have evolved to limit acorn production for a few years to reduce the population of the consumers.  Then they produce a bumper crop, with far more nuts than the population can possibly consume, leaving plenty to survive into spring.  Of course, the high food year produces lots of offspring for those animals the following year, which is then followed by an increase in the next level of animals in the food chain: owls, hawks, fox, fisher, and other predators.  But all these acorns should provide sustenance for healthy deer and turkey populations this winter.

But let's not rush winter.  The fall colors should last another week, so next weekend should provide one more opportunity for leaf peeping.  At least one loon is still on the lake, enjoying the beauty of autumn at Lake Wicwas. 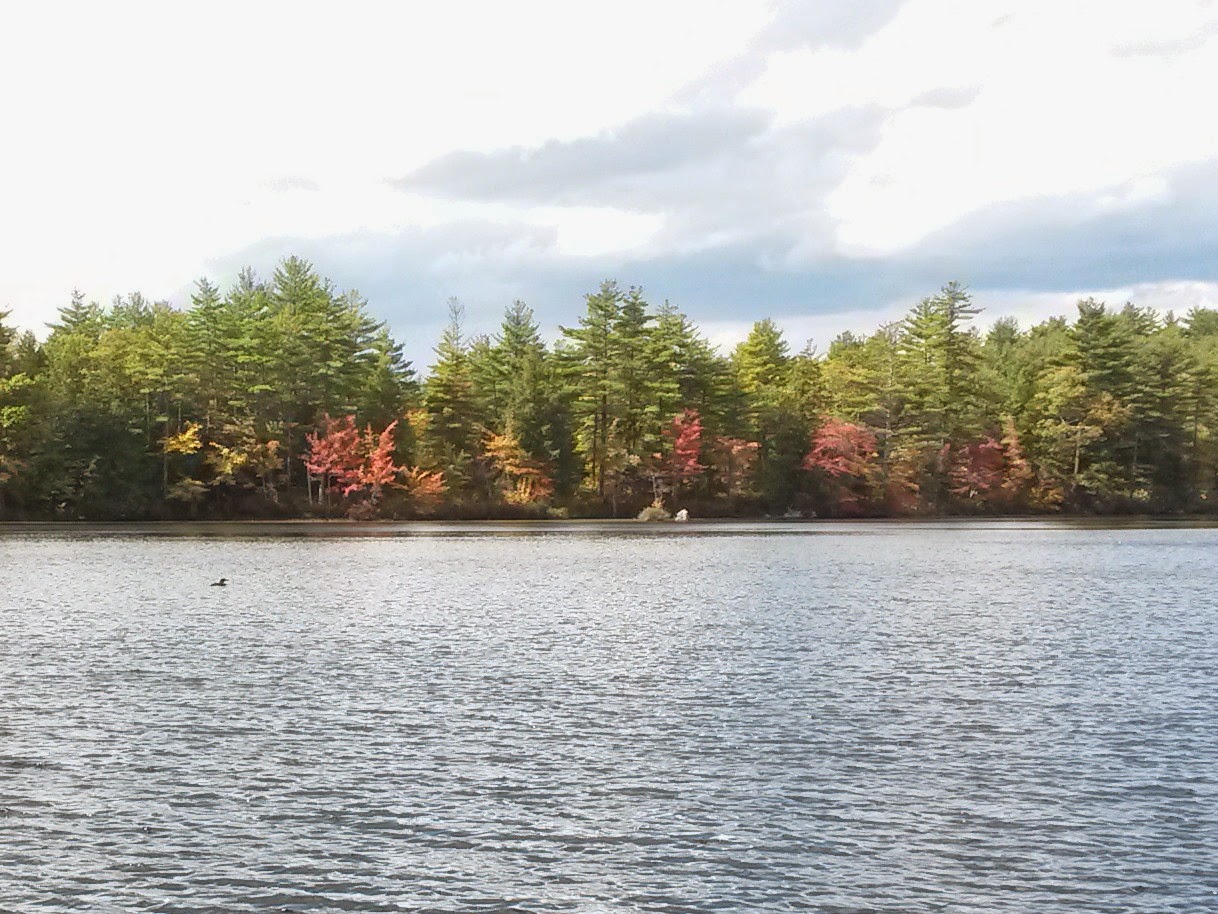 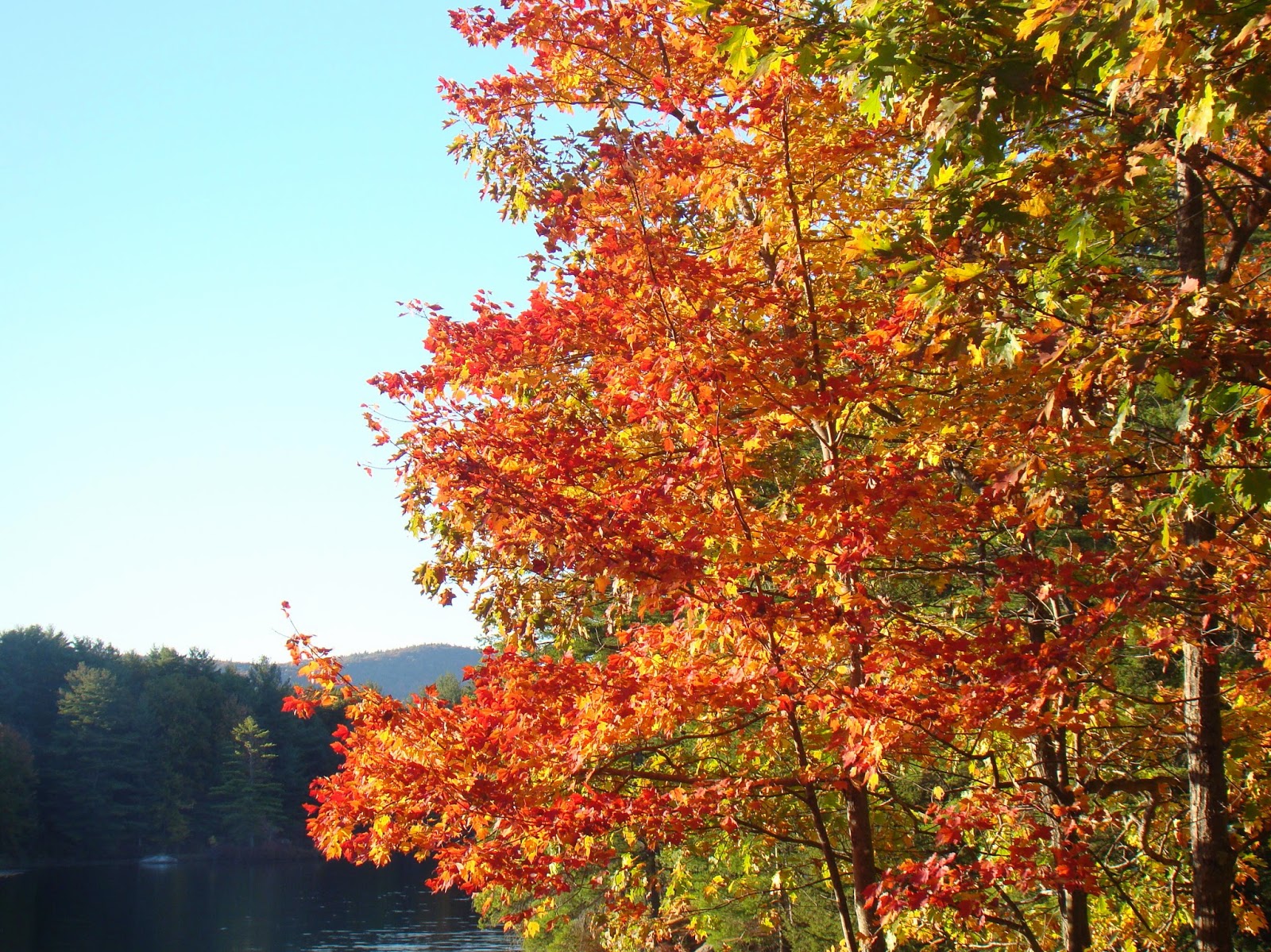 The beavers have been very active lately - they have even been trying to stop the water flowing over the dam by piling up branches and packing reeds and mud on the dam.  Even though the town water control person has been removing the debris several times a week, they were able to raise the water level a couple of inches above the dam setting.  It appears they are building a second structure just a short way downstream from the dam.  I understand the town has hired a trapper to try to reduce the beaver population on the lake.

One morning I watched a beaver searching the shoreline for saplings to cut down and take away for winter food.  At one point it stopped to take a break and give itself a bath.

It climbed up on rock just below the waterline and spent several minutes scrubbing its fur all over, head to toe.  I took a couple of videos, but the resolution after uploading to the blog is so low you can't see what it is doing very well.


After its morning ablutions it swam around the shore again, reconnoitering for future logging trips. 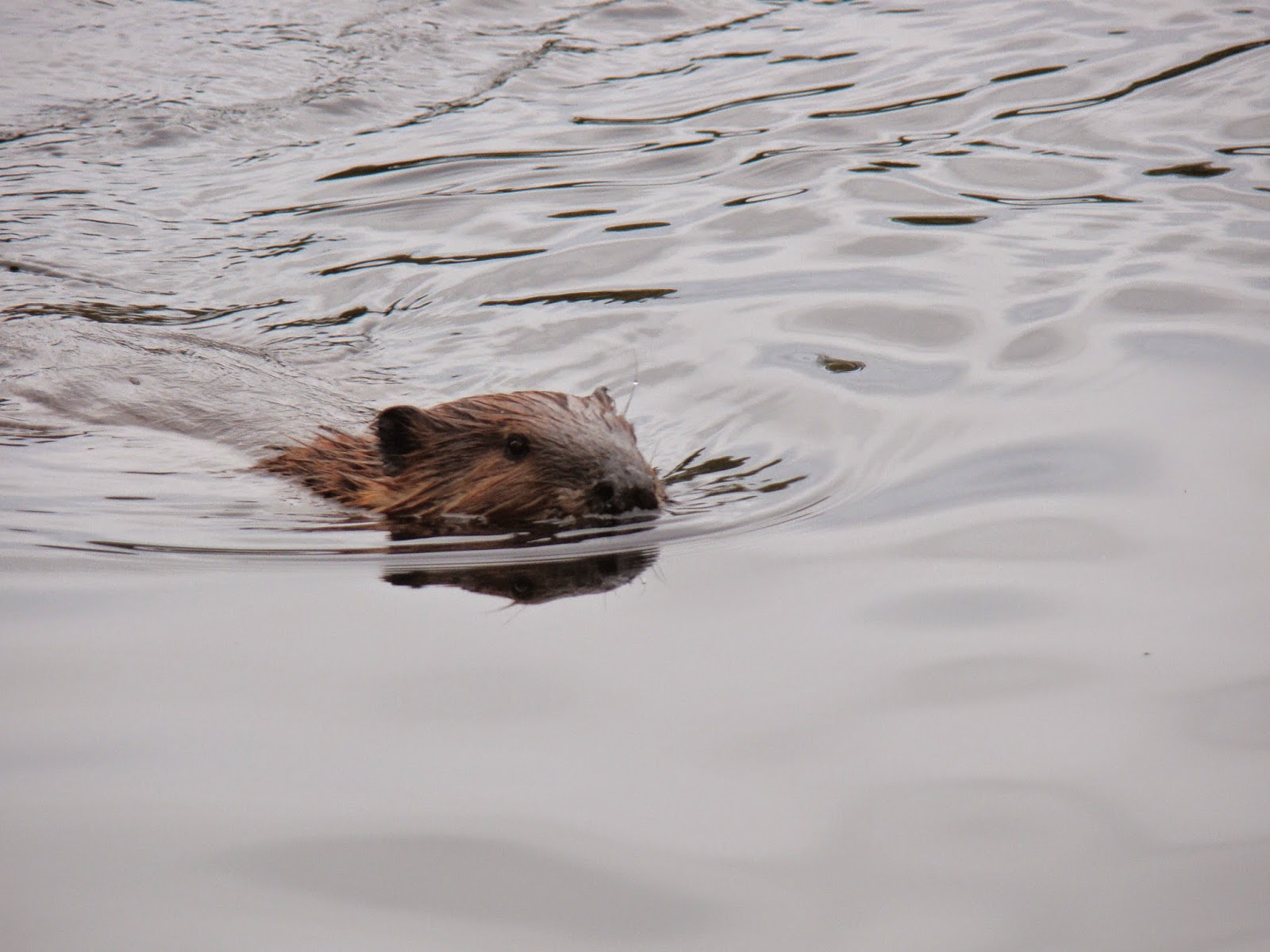 Back on August 31 I posted pictures of hundreds of tiny double-decker spider webs;  this week I saw a spider in one of them and was able to identify it:  a Bowl and Doily Weaver Spider.

This spider is less than a quarter of an inch long.  In its two-layer web, the top web is the bowl, while the lower web is the doily. 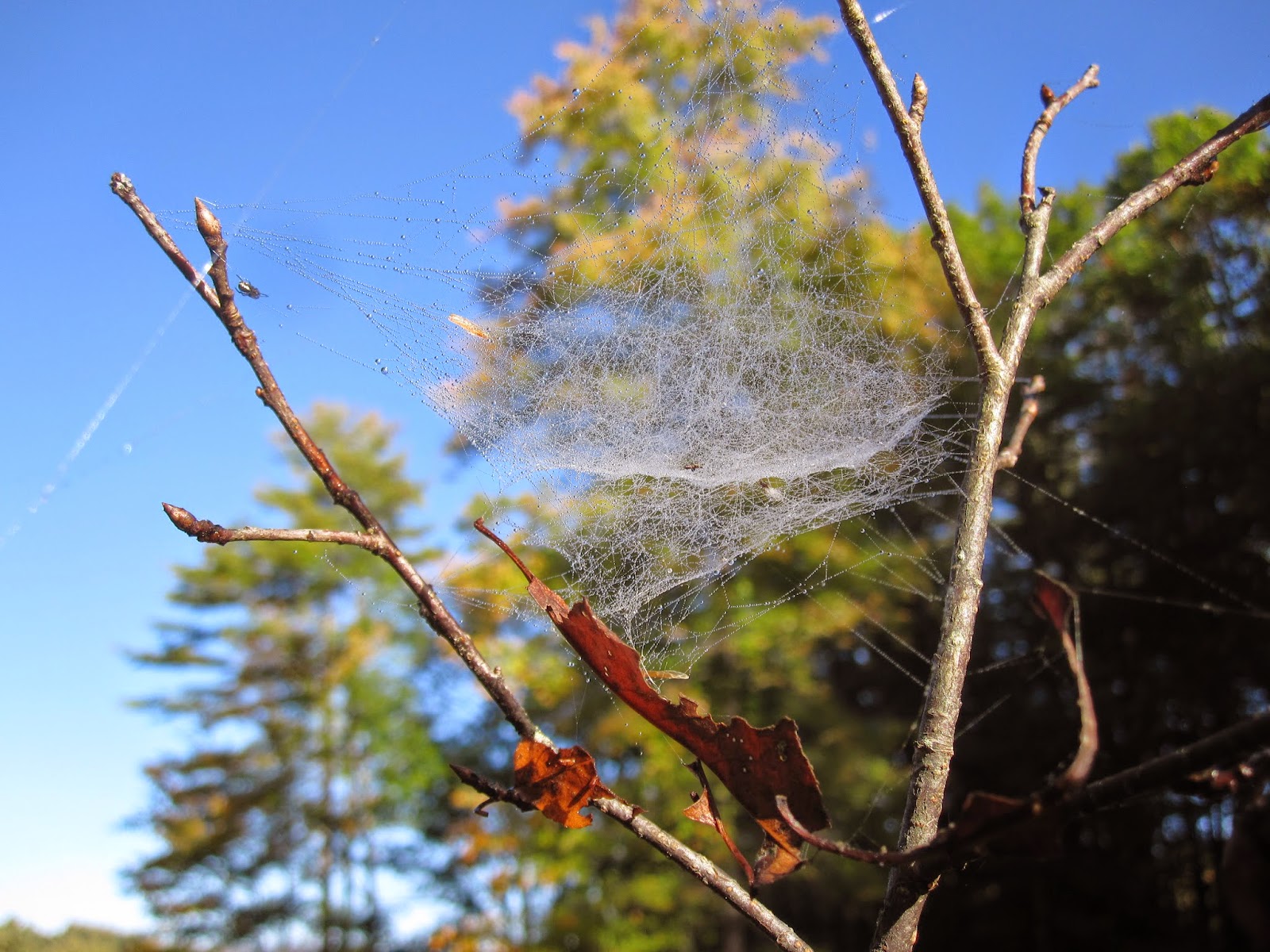 The spider hangs out on the doily waiting for a customer to come along and land in the upper web which is not sticky.  The spider then walks on threads strung above the doily and reaches up from below to grab the unsuspecting guest, and, lunch-time!  The two webs also provide protection from predators (and photographers).

The team of people working to continue to protect Lake Wicwas have been very busy this fall as well, including working with very generous land owners and the state to conserve three more tracks of land.  The Lake Wicwas Assocation, working with the Lakes Region Conservation Trust, applied for a grant from the state Aquatic Resource Mitigation (ARM) fund to ensure there will be no cost to the landowners in the process.  On Monday the ARM committee toured on-land and from the water to assess the properties.

I am optimistic they will see the value of these important wetland properties.

The leaves around Lake Wicwas are approaching their peak color;  they will probably reach it by Columbus day, so it will be a great week to do some leaf-peeping. 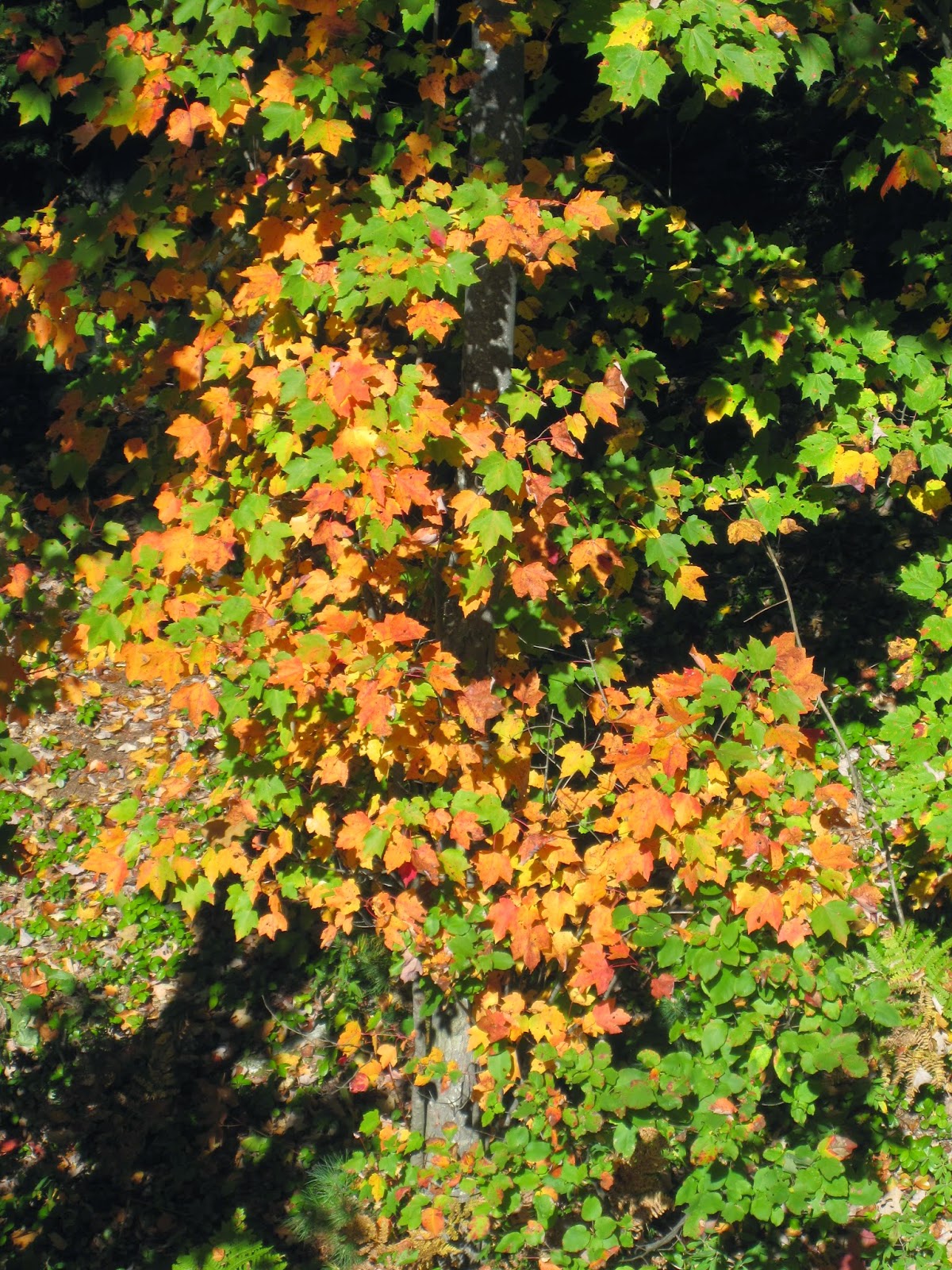 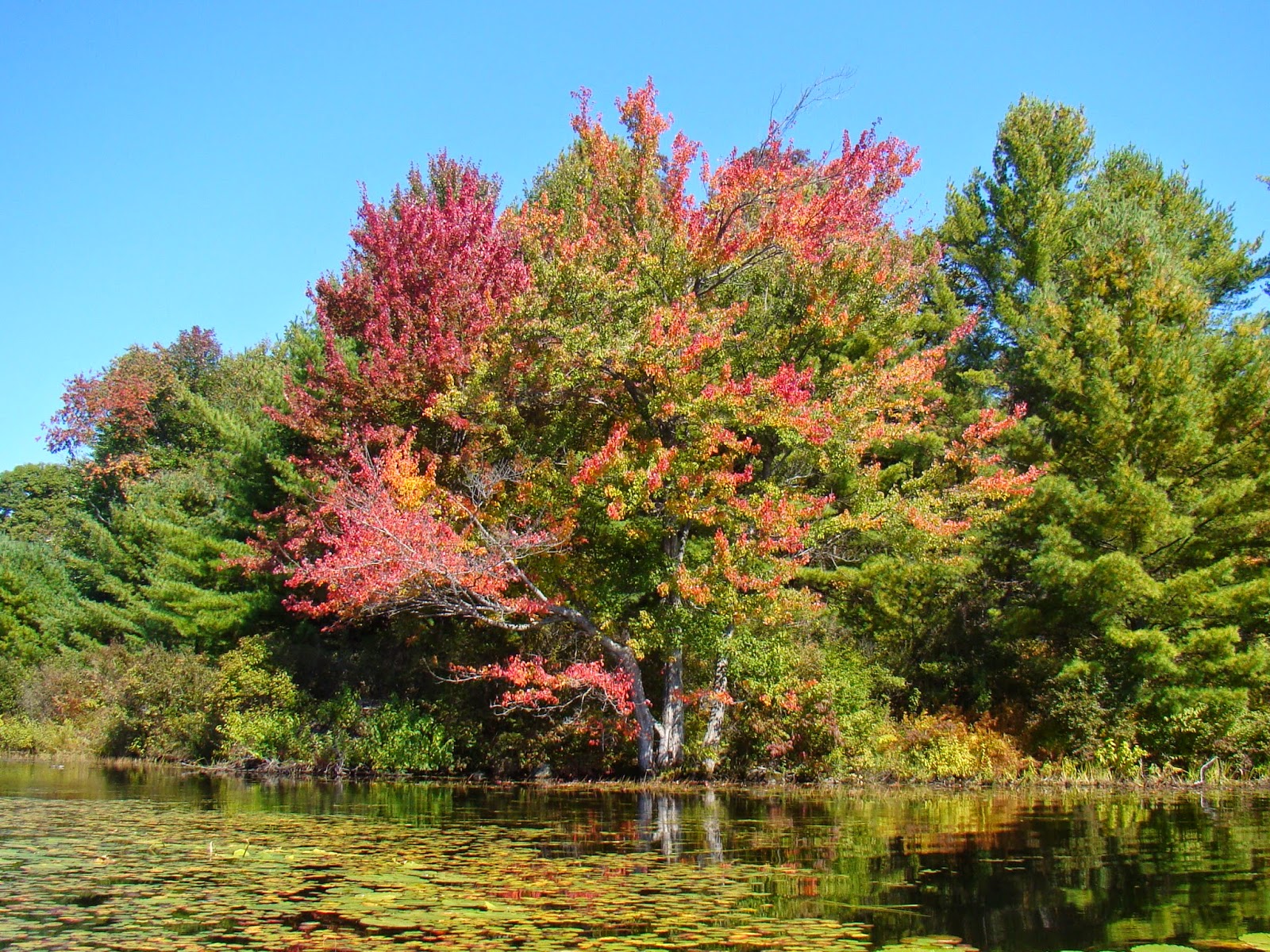 Although not nearly as obvious, even the White Pine trees drop leaves this time of year.

And the forest-floor plants are producing fall bounty too.


The rain and wind on Saturday brought down some of the early-turning leaves, which are now painting the trails and the lake with red and orange. 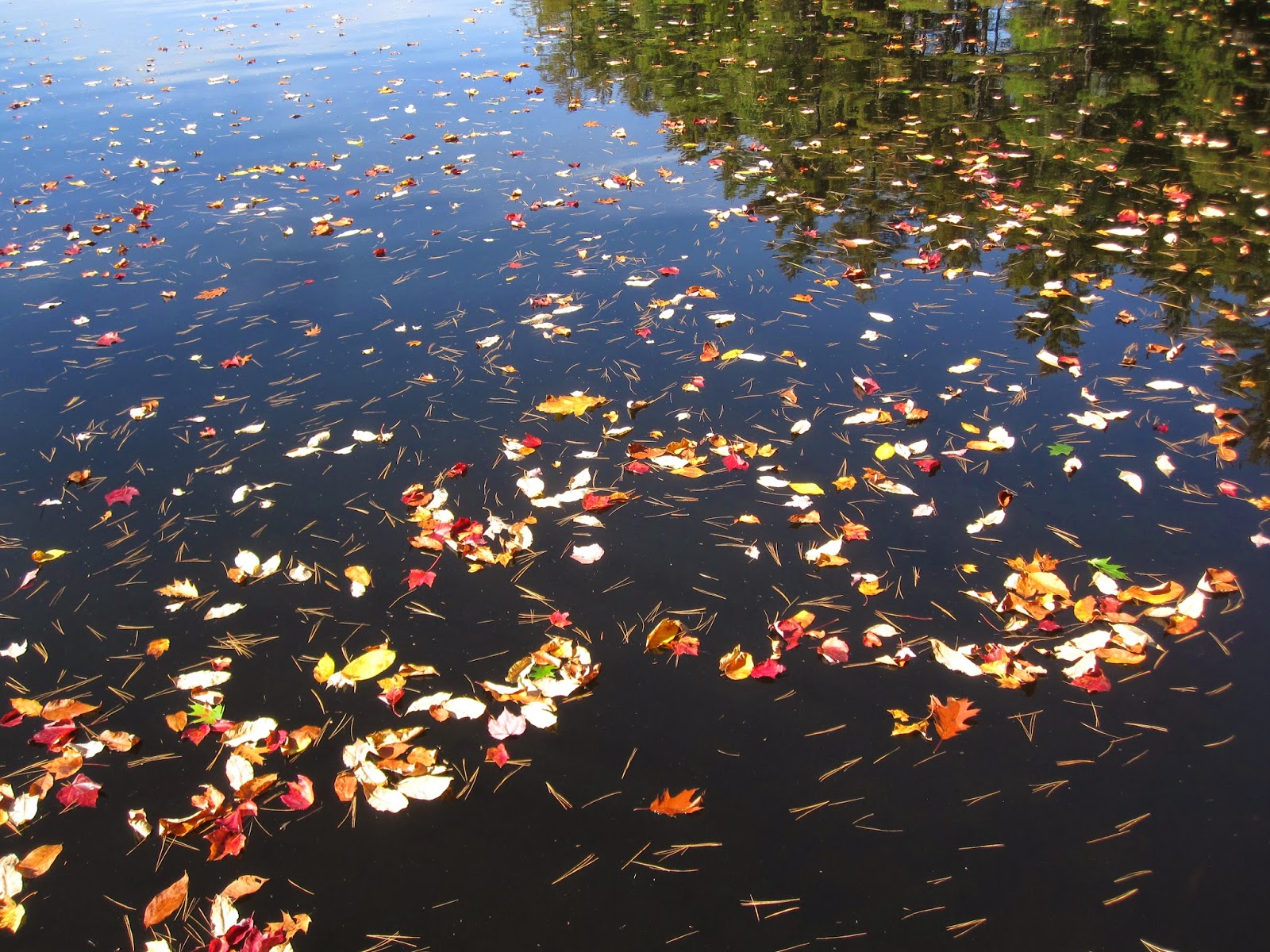 Beware:  If you have any pretty maples along your shore line, you may want to protect them from this guy! 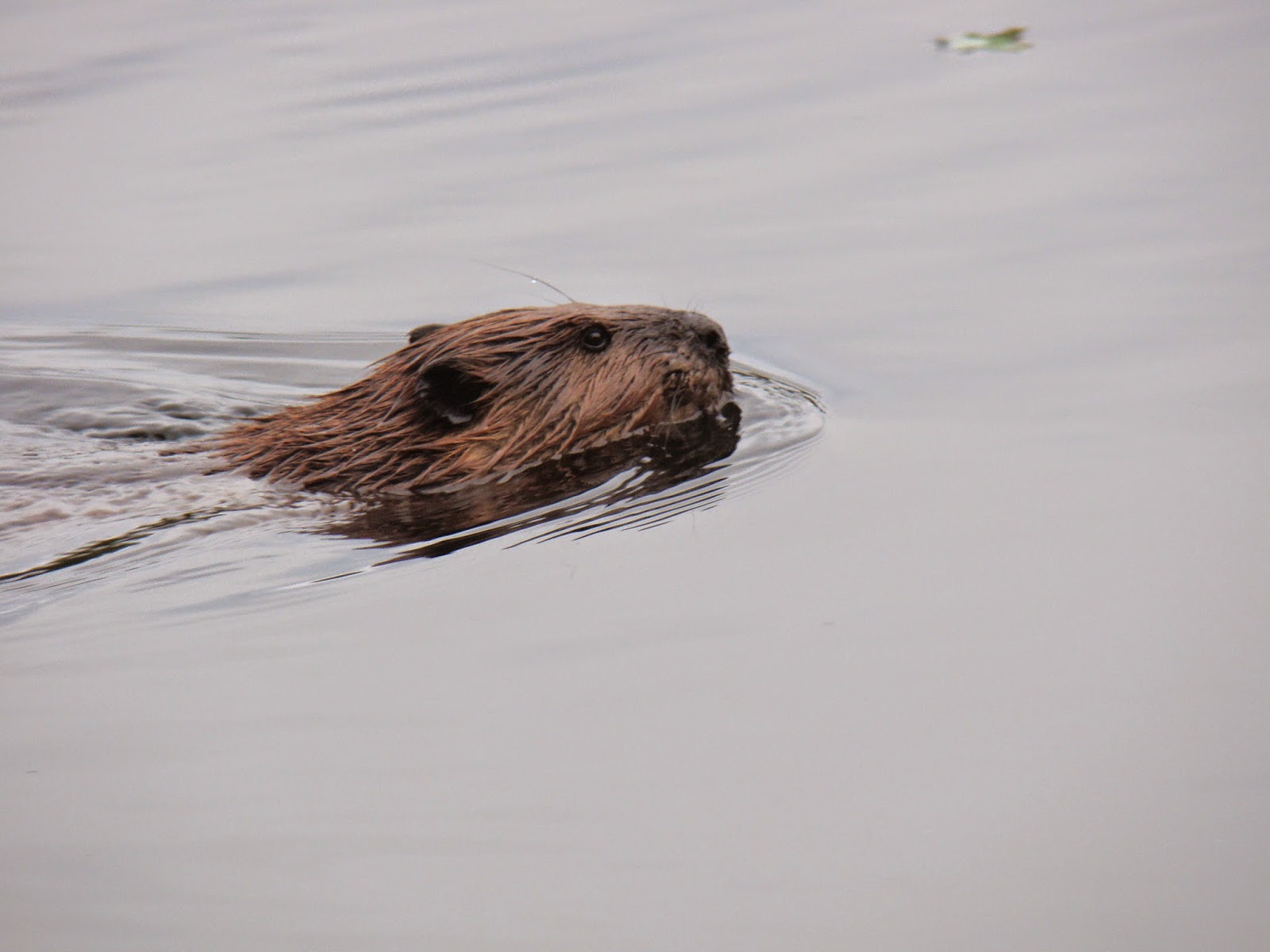 Posted by Scott Powell at 8:04 PM No comments: