The big news on Lake Wicwas this week is that we have a new loon chick!  I haven't seen it, but our faithful loon watchers have.  There were two eggs in the nest, so it is possible there will be a second chick;  we should know in just a day or two.  There is still a long road ahead for a little chick and its parents - if you see them, please give them a wide berth - but this is great news.

There have been multiple loons on the lake this year, and the past few days their activity has shown signs that nesting is in progress.  Has one of the nesting pair, maybe the male, been keeping a close eye on the other loons, letting them know who's lake this is, and keeping them away from the nest?  There have been reports of loons destroying the eggs or killing the chicks from another loon pair. 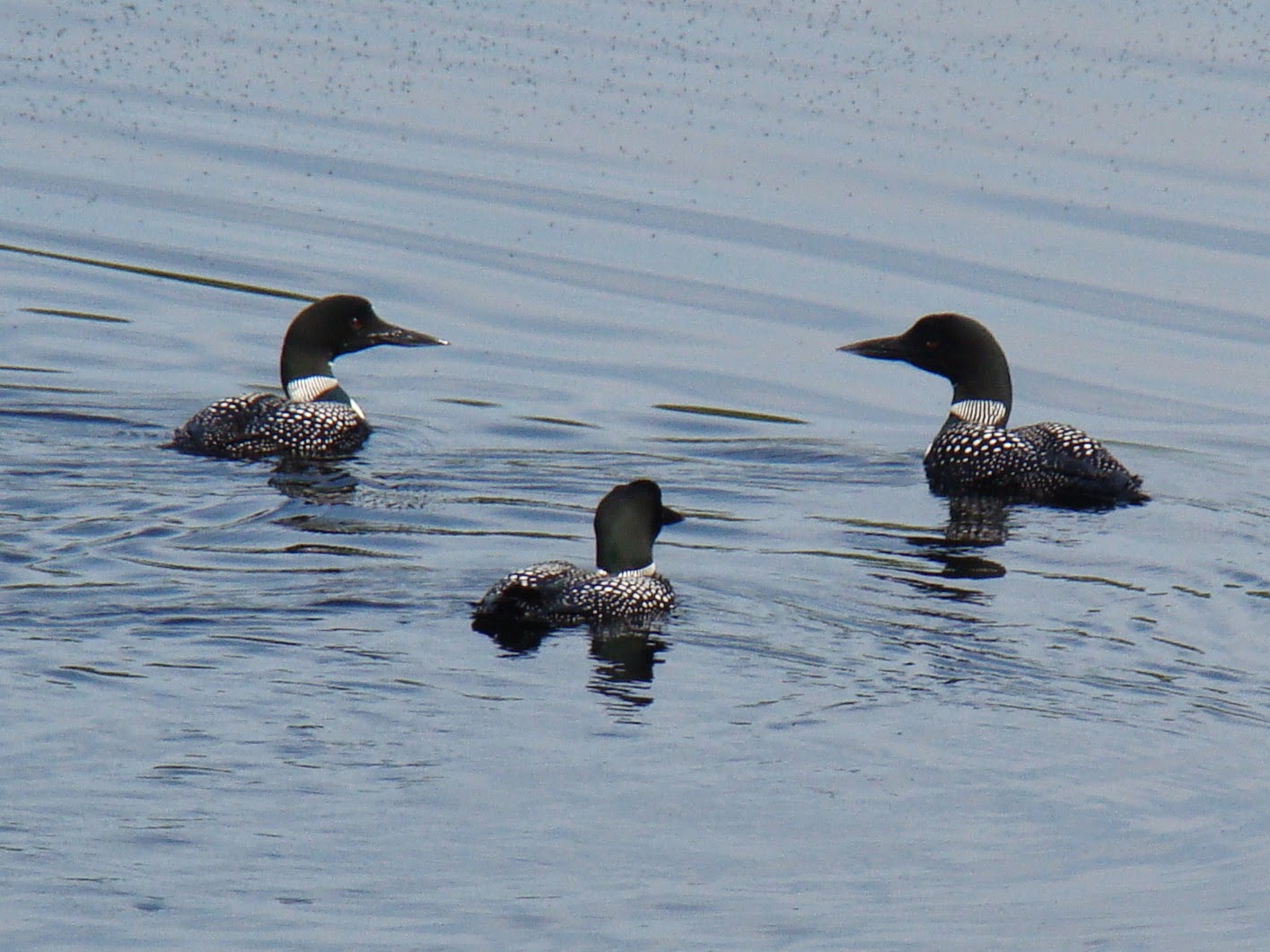 Doesn't it look like two males facing off to see who is dominant?

When the visiting pair dove, the third went down as well to follow;  some of the dives were rather loud - that's what caught my attention in the first place - it sounded like someone jumping into the lake.

Eventually it appeared that dominance had been established, and one loon swam off, leaving other two in this cove, far away from the nest. 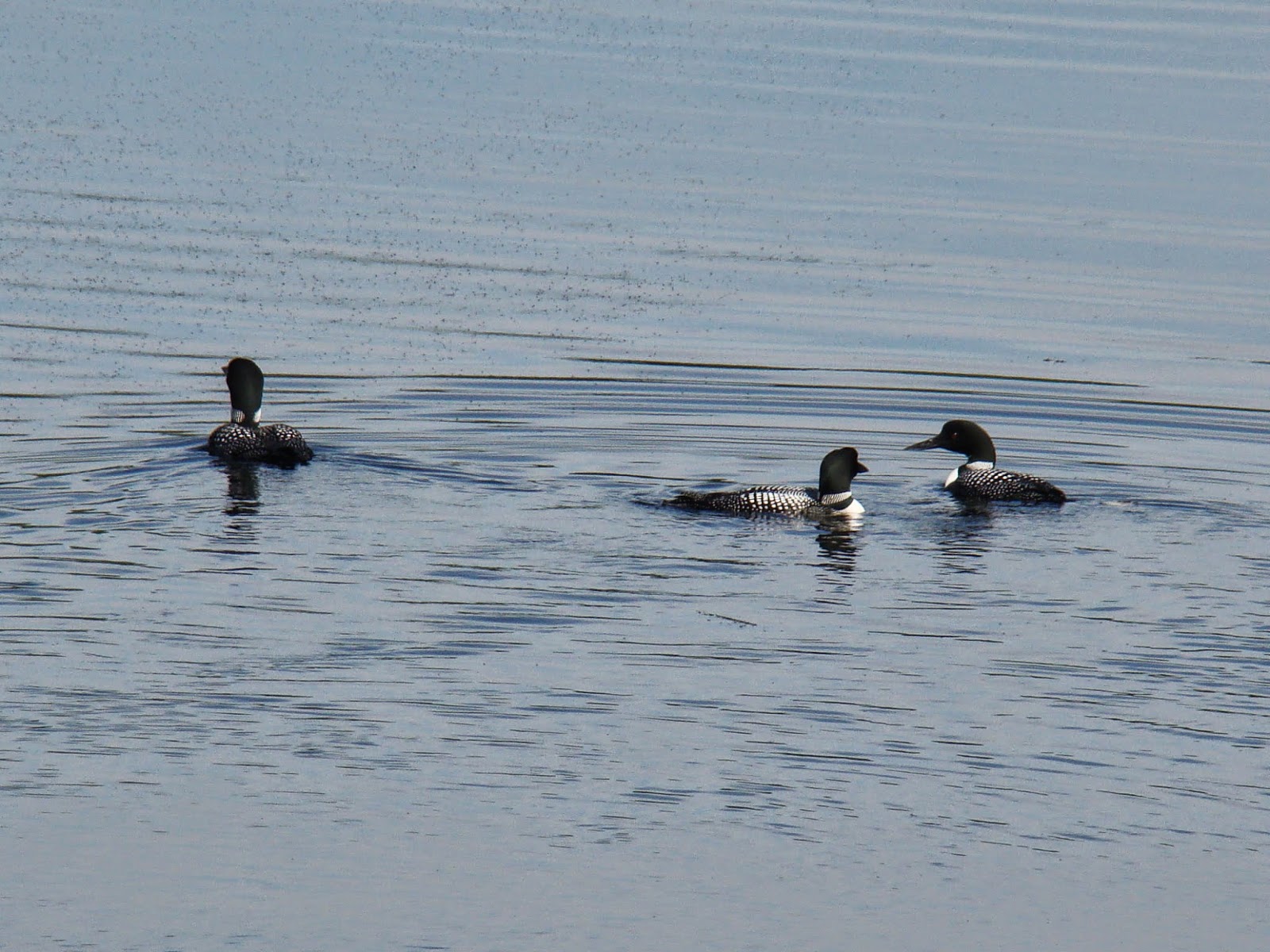 This morning I did a session as a Lake Host at the boat ramp.  Lake Wicwas is one of a very few lakes in the region that does not have the invasive weed Eurasian Milfoil, and our active Lake Host program is a key factor in keeping it this way.  If you have never volunteered to be a Lake Host, consider doing so - it is an easy, and pleasant way to spend a couple of hours.  I like to be there early in the morning when I might see a pretty sunrise scene.

Here's what things looked like today - first, the sun rose over the mist hanging in the Chemung swamp.

The soft light revealed a web which a spider had built, taking advantage of a man-made structure.  This web is constructed on a single wire supporting a telephone pole. 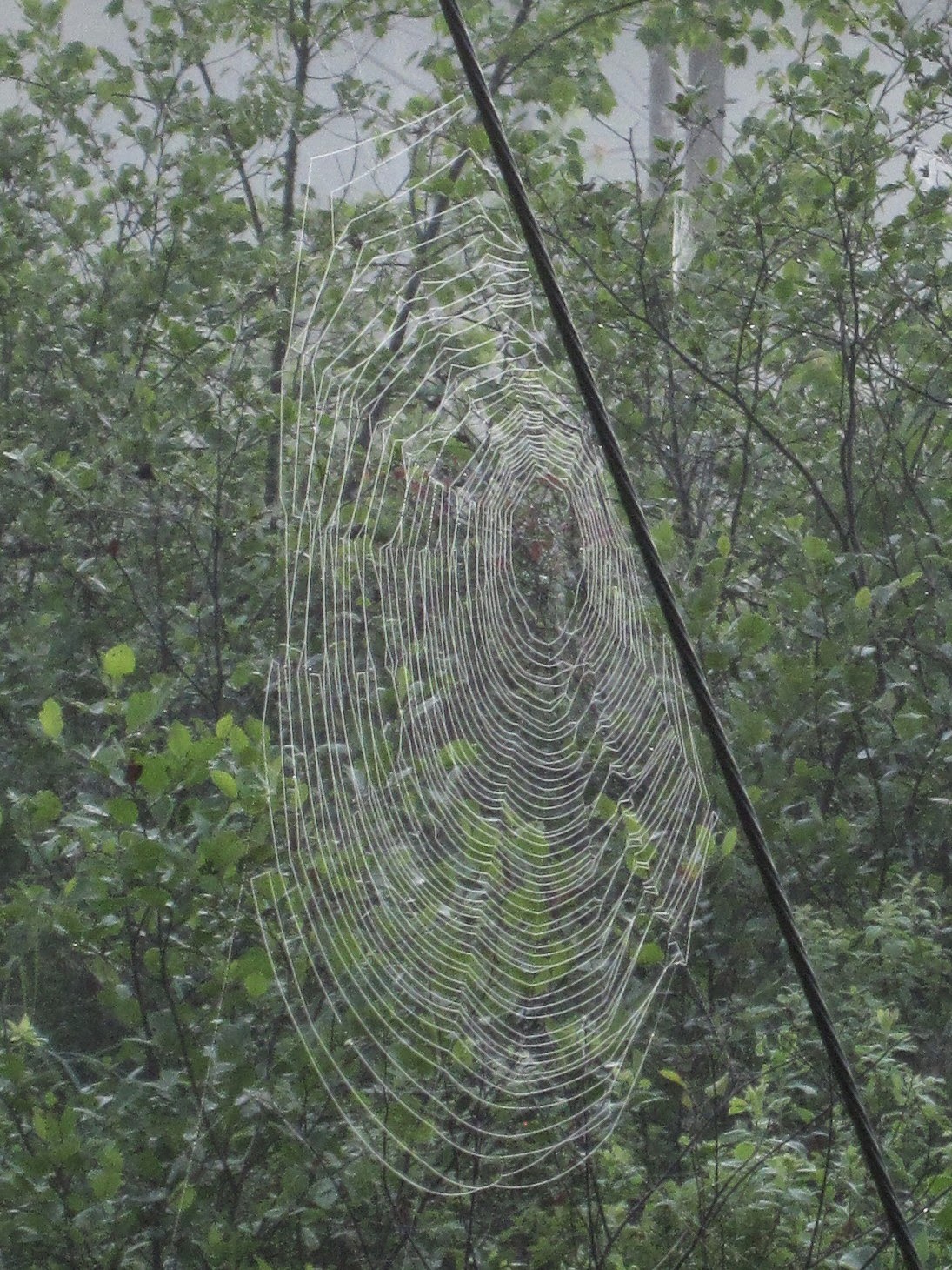 It's not the most symmetrical web I have ever seen, but it's amazing how well a tiny spider can build a circular structure on a linear frame.  And this without blueprints, an instructor, or even a computer!

Then the low sun shone across the calm lake, illuminating the western shore.

While I was there I noticed this insect carcass on a pole;  I believe it is the discarded shell of a cicada.

Sometime I'd love to find one of these types of insects in the process of splitting and emerging from it's shell.  It's fascinating how it can squeeze itself out of that little split in the back, extracting its folded wings and each fragile leg. 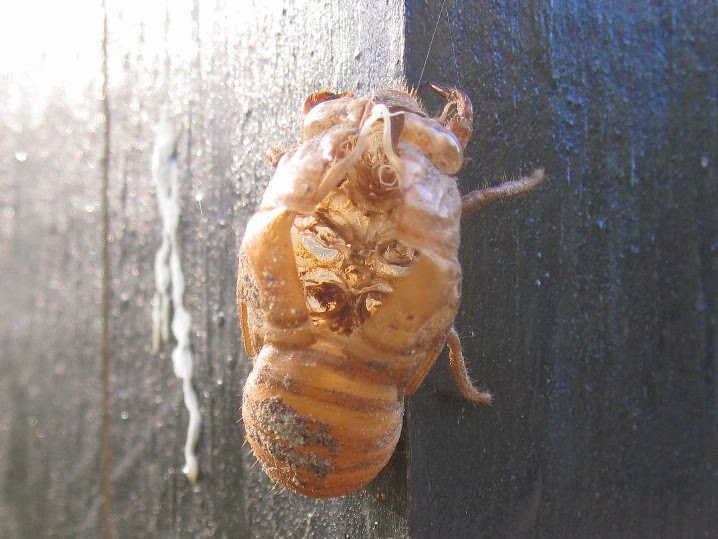 In the Lake Wicwas plant world, the first blueberries are already ripe!

These are low bush blueberries in an exposed, sunny area.  Blueberry pancakes aren't far off now!

Also the summer flowers are progressing - I'll close this week with some flowers from the Whorled Loosestrife.

Maybe soon I'll have some pictures of our newest resident on the lake!

Posted by Scott Powell at 8:45 PM No comments:

Welcome summer!  After a couple of windy, dry days, the summer solstice brought in a beautiful summer day today - perfect for a quiet paddle around Lake Wicwas.  What better summer sight is there than this? 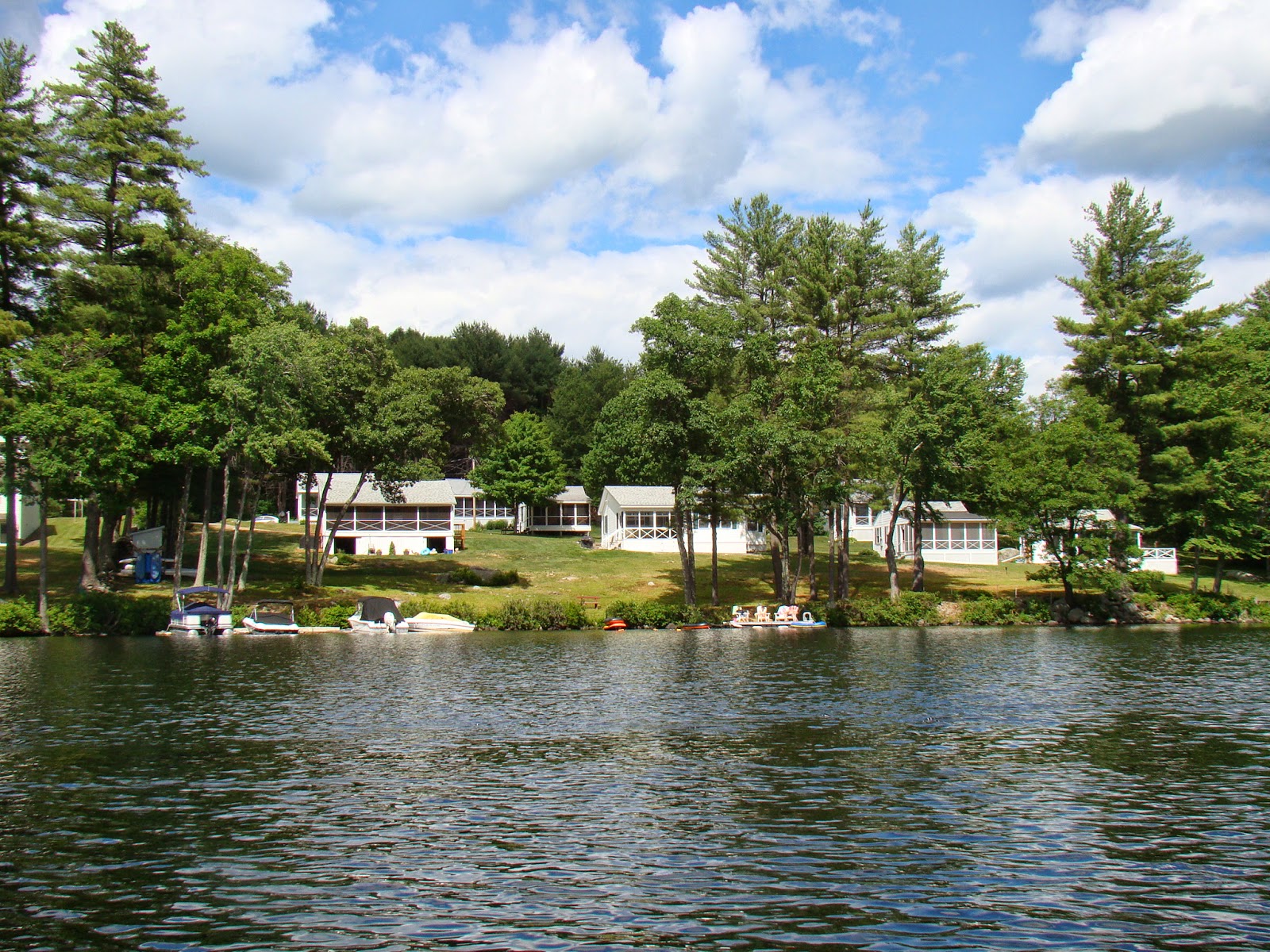 The flowers have moved into their summer phase, with the Irises and Sheep Laurel blooming around the shoreline.

The aquatic plants are fully established now as well.  I could clearly see beaver highways through the marshes, their routes divulged by the absence of lily pads where they travel.  The center route here leads to their lodge, and at the junction, paths lead both north and south to open water in the lake. 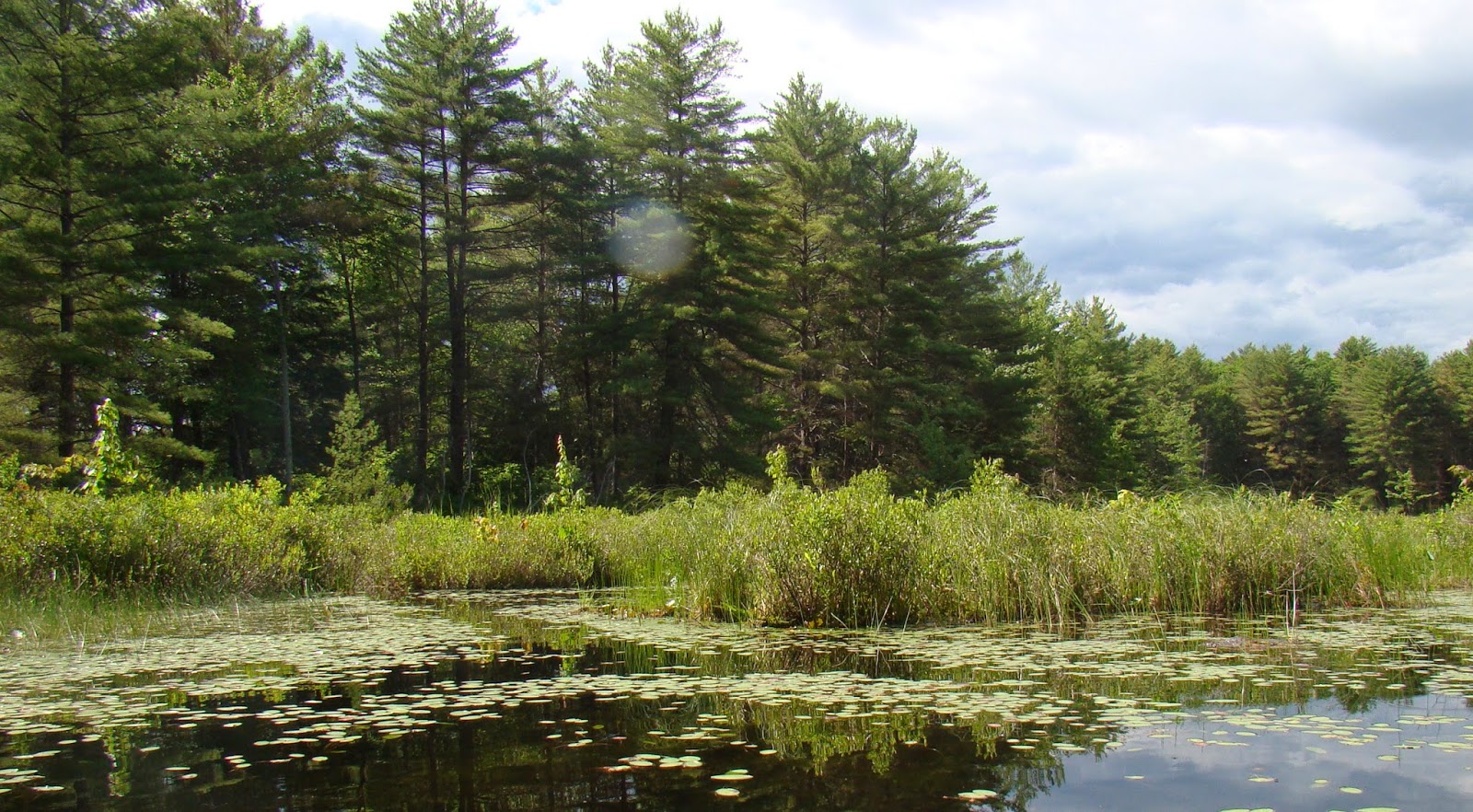 I came upon a few more interesting insects this week, including a Crane Fly which had landed right on our door.  These are really neat flies, scary looking, but completely harmless - unless you are a mosquito larva upon which they sometimes feed. 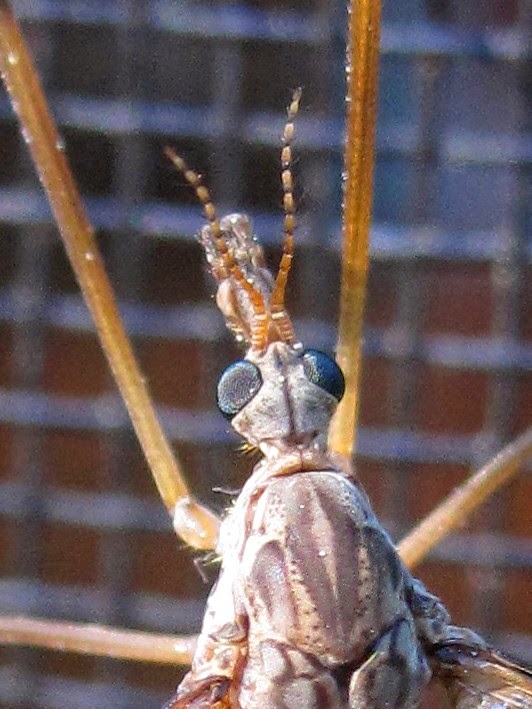 They certainly give credence to the moniker of bug-eyed.

This fuzzy moth was resting and munching on a blueberry plant - I don't know what kind it is, but it looks fairly unique. 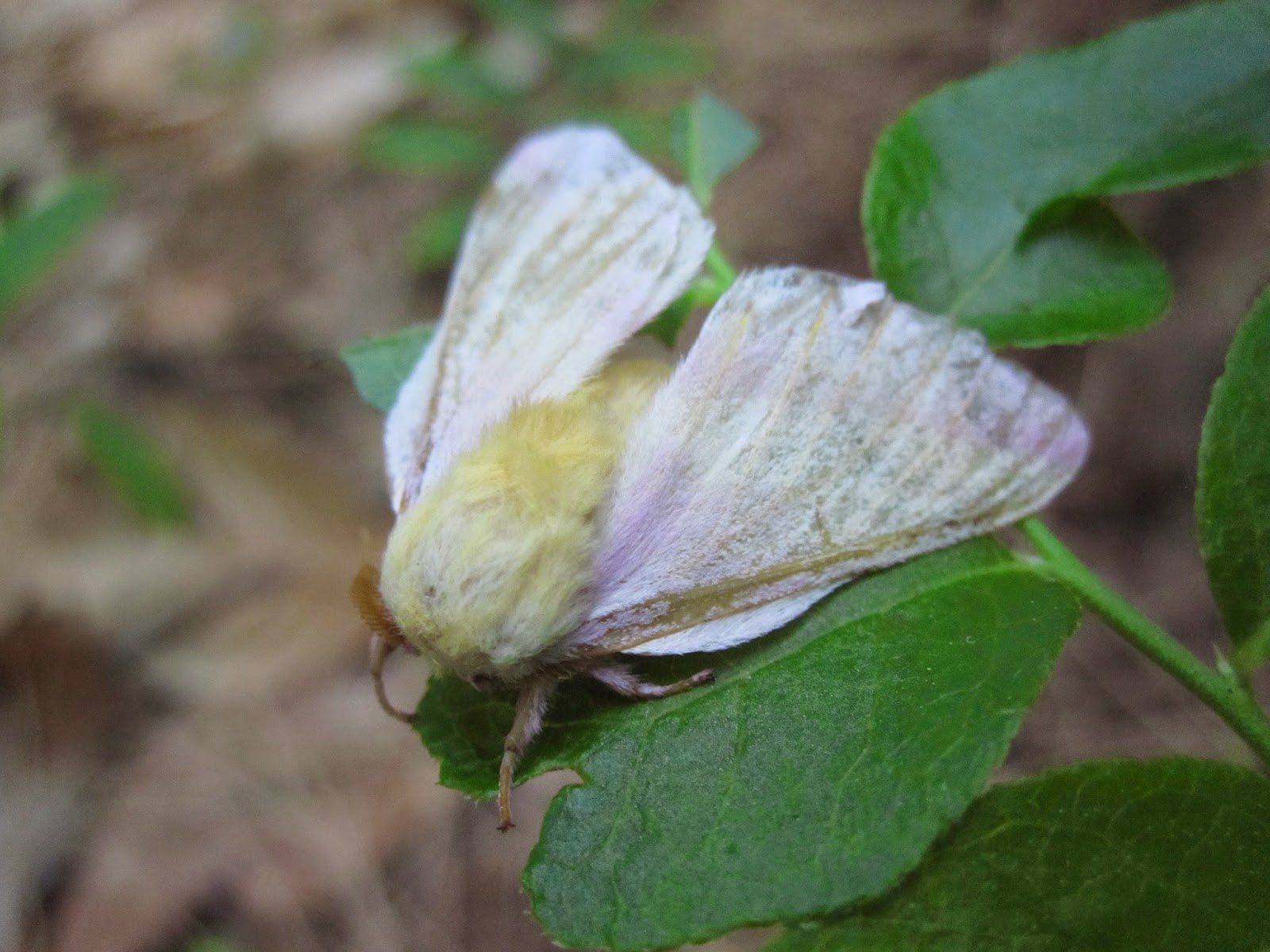 There are probably dozens of nondescript, whitish-brown moths that I couldn't hope to identify, but this cool caterpillar is so unique it was easy - it is a pyreferra citrombra.


The moth itself is nothing special to look at, but the caterpillar is striking. 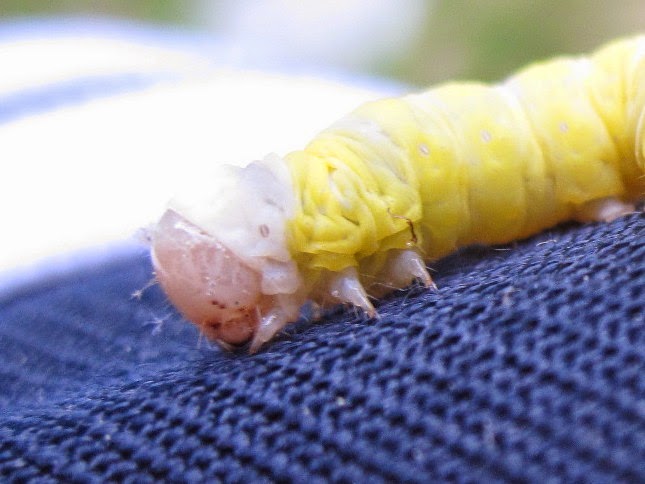 And, we heard a report that the loons have selected a nesting site.  Pending good weather, steady water levels, no predators, and a lack of human harassment, and Lake Wicwas may add to the loon population in 2014!

We took a drive up to Sugar Hill to see how the Lupine's are doing this year - and maybe to stop in at Polly's Pancake Parlor....  The primary fields are not as impressive as other years, but we found some nice blooms around Pearl Lake. 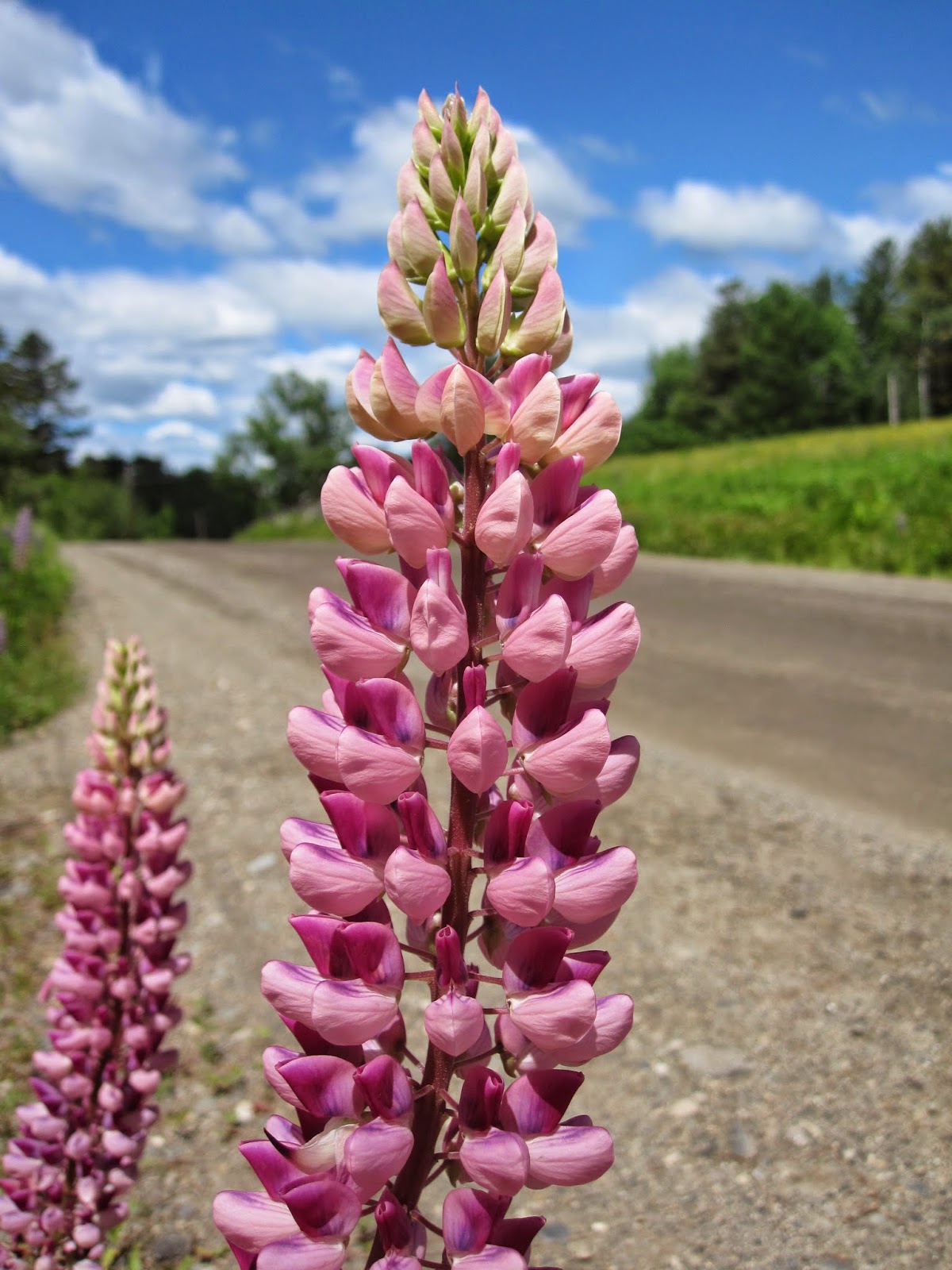 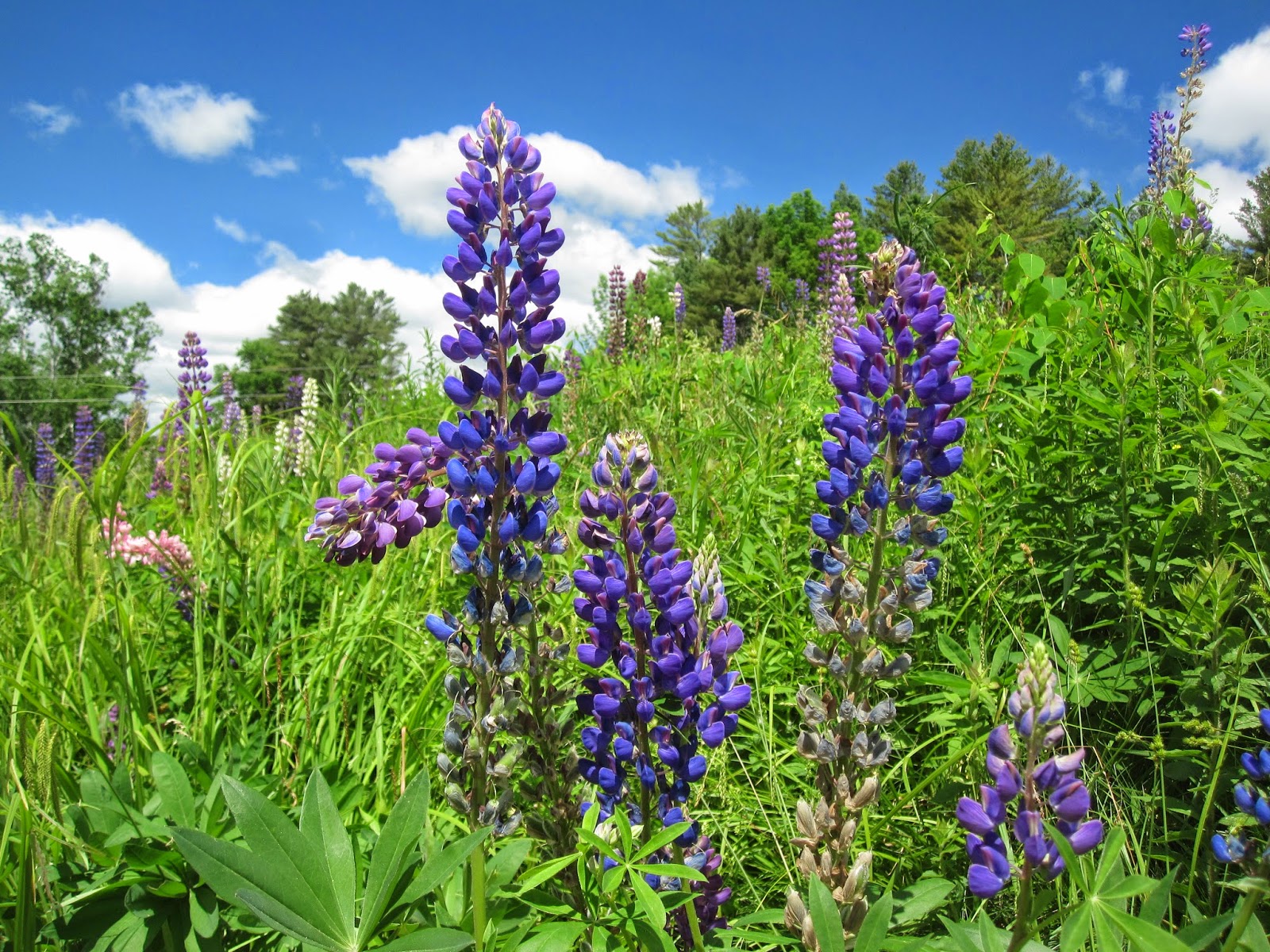 We also saw a scene that reminded me of Steamboat Springs - this one is for you VP!

On the return trip we drove by the Franconia Airport and found the gliders were enjoying the brisk winds.  We stayed to watch a full cycle of one of the larger gliders. 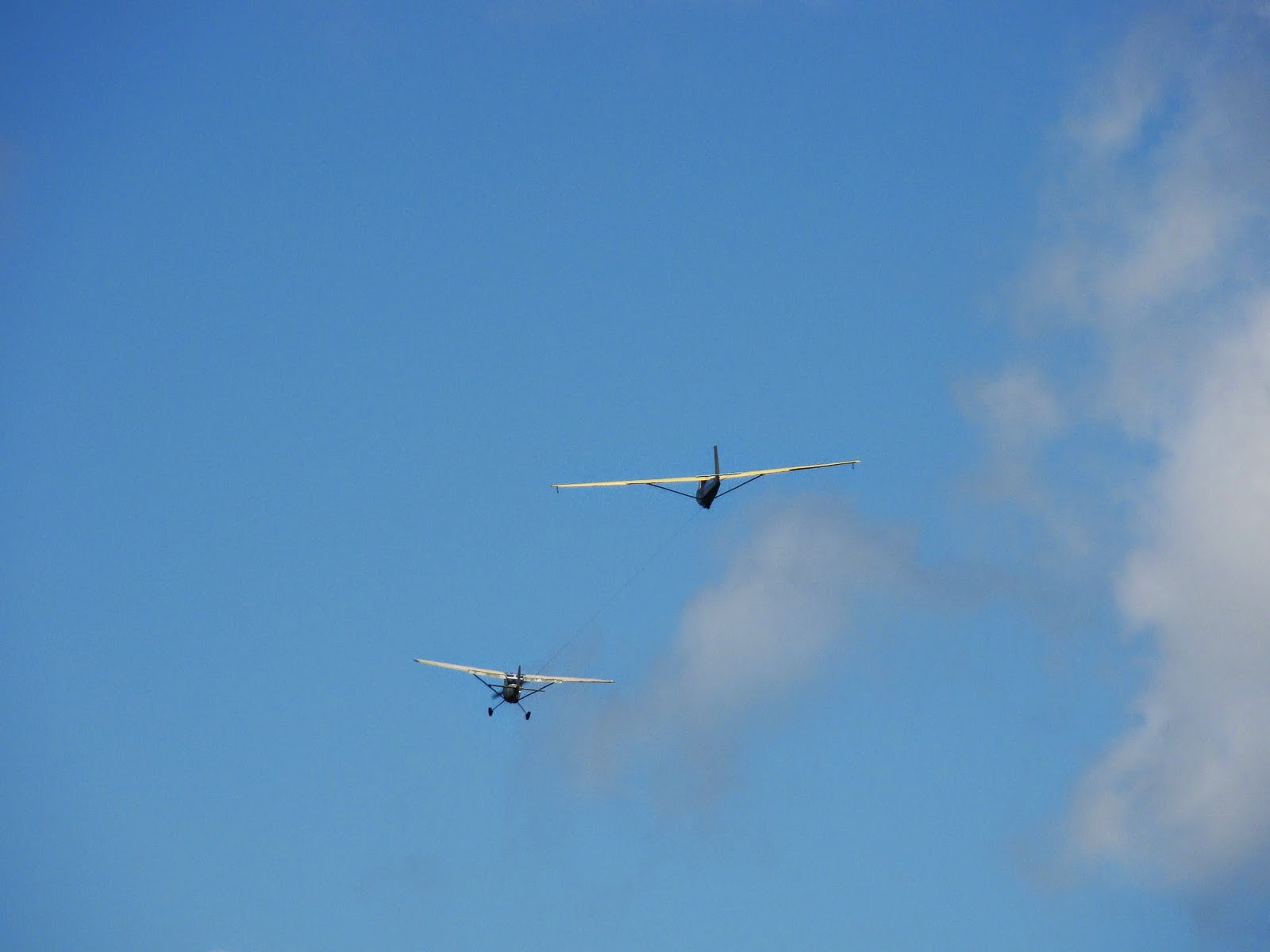 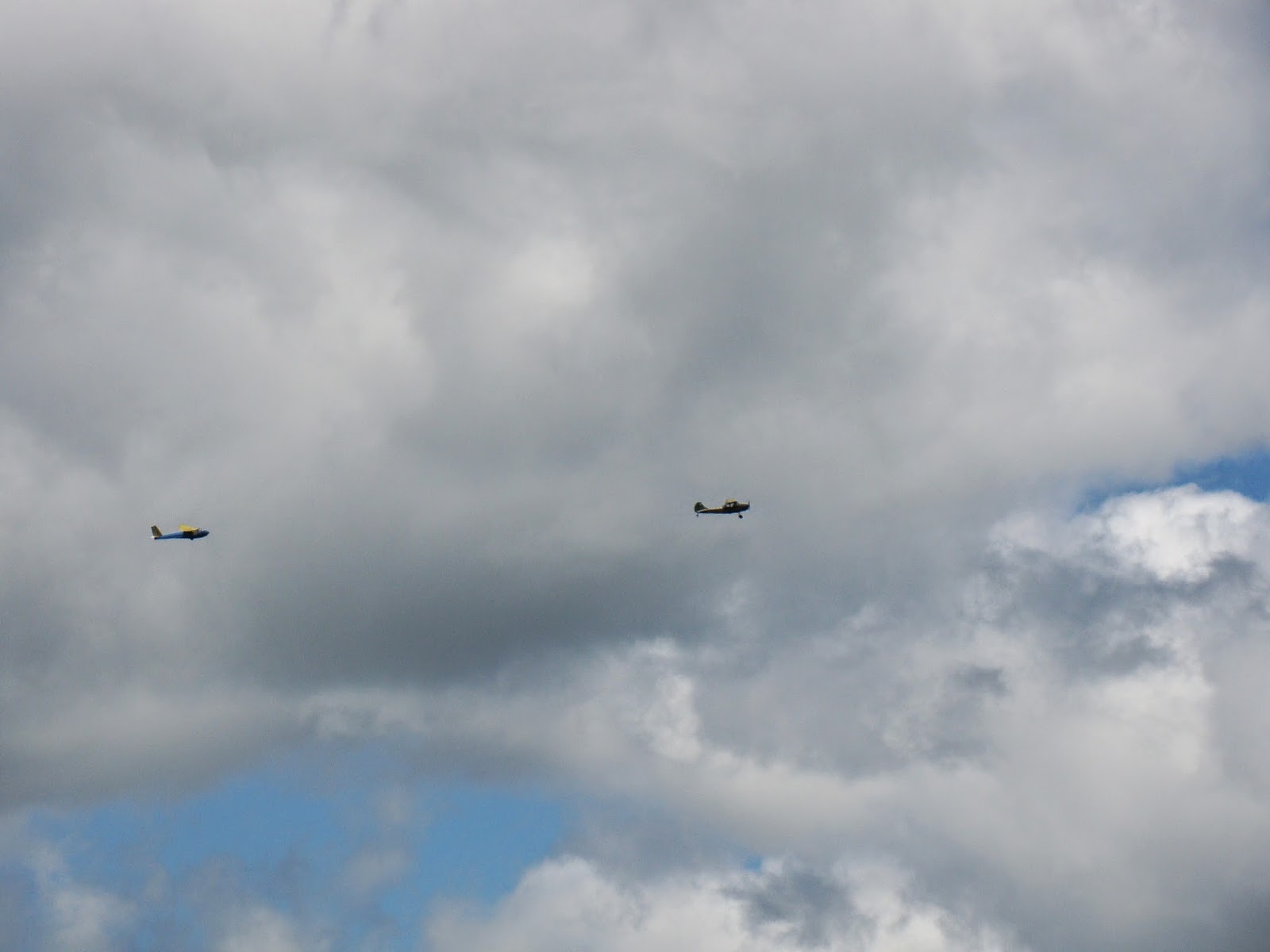 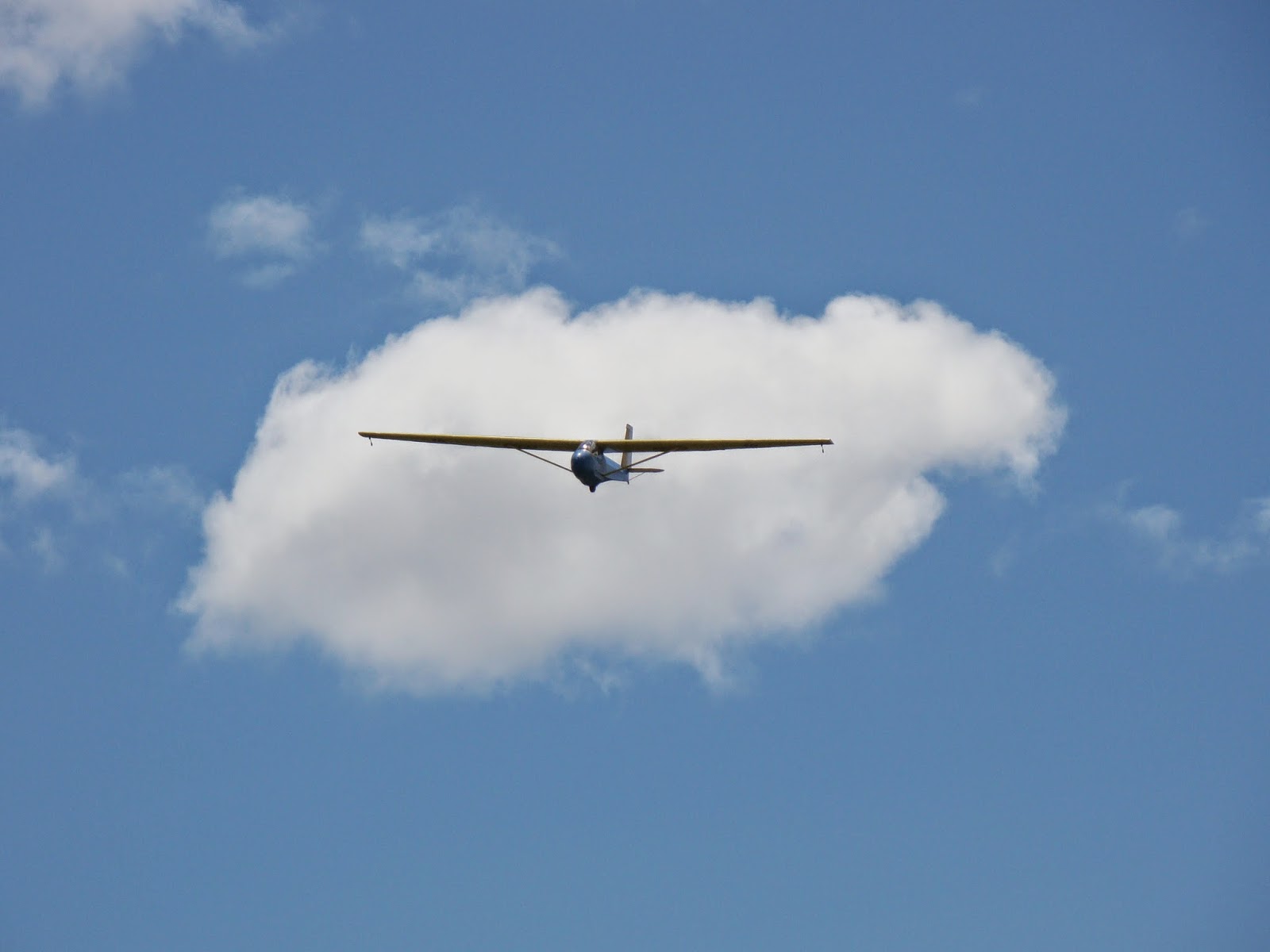 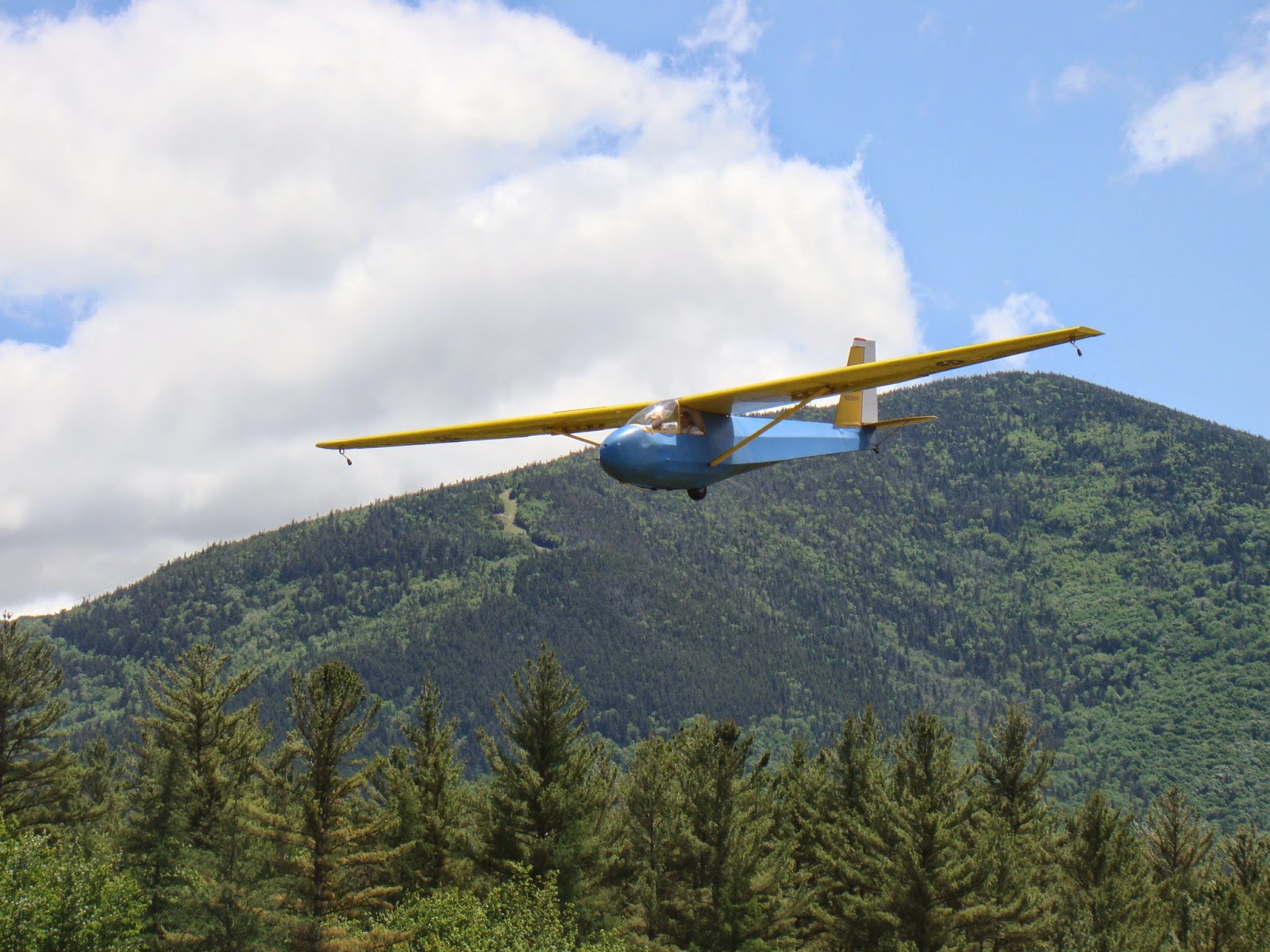 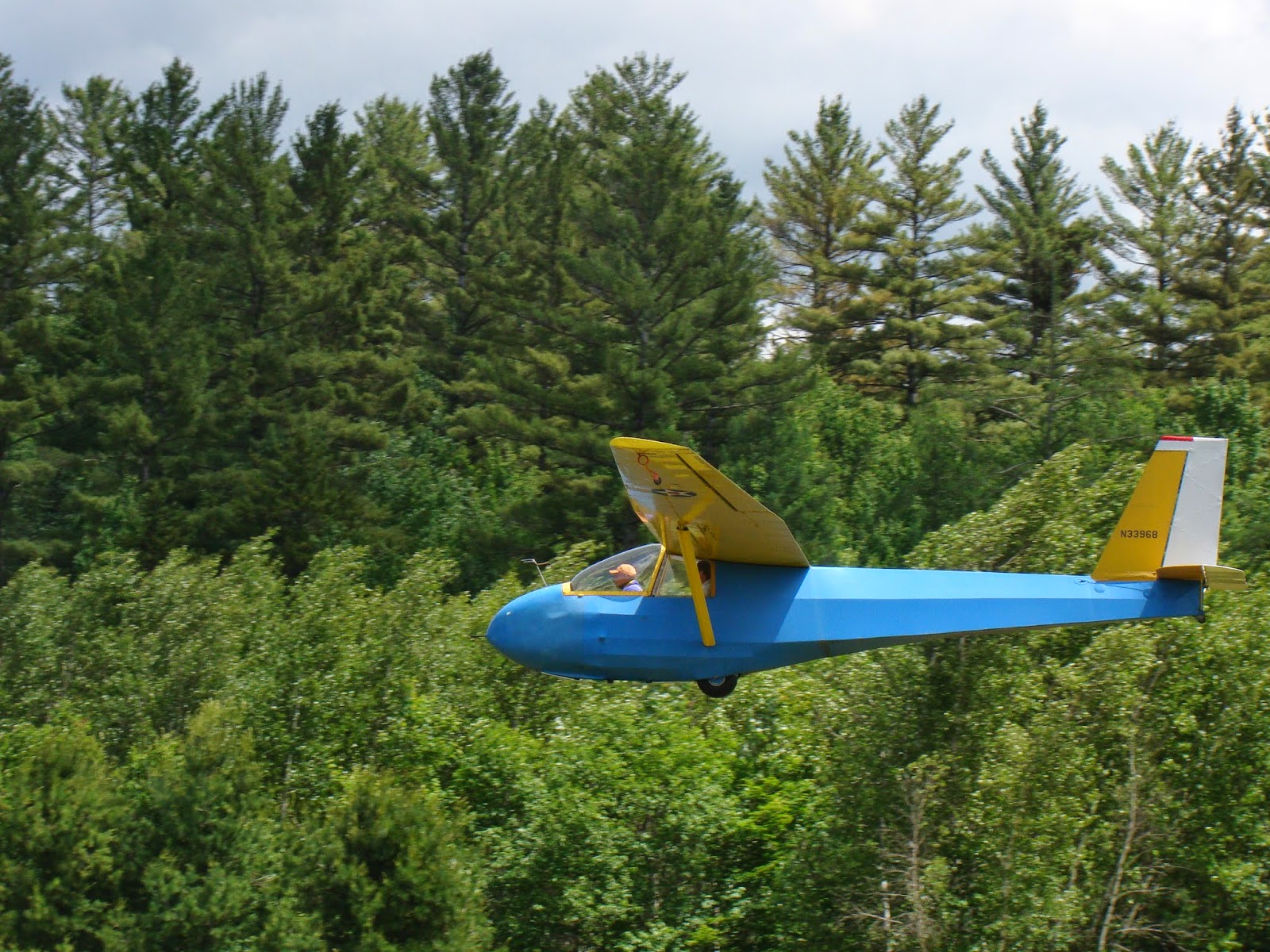 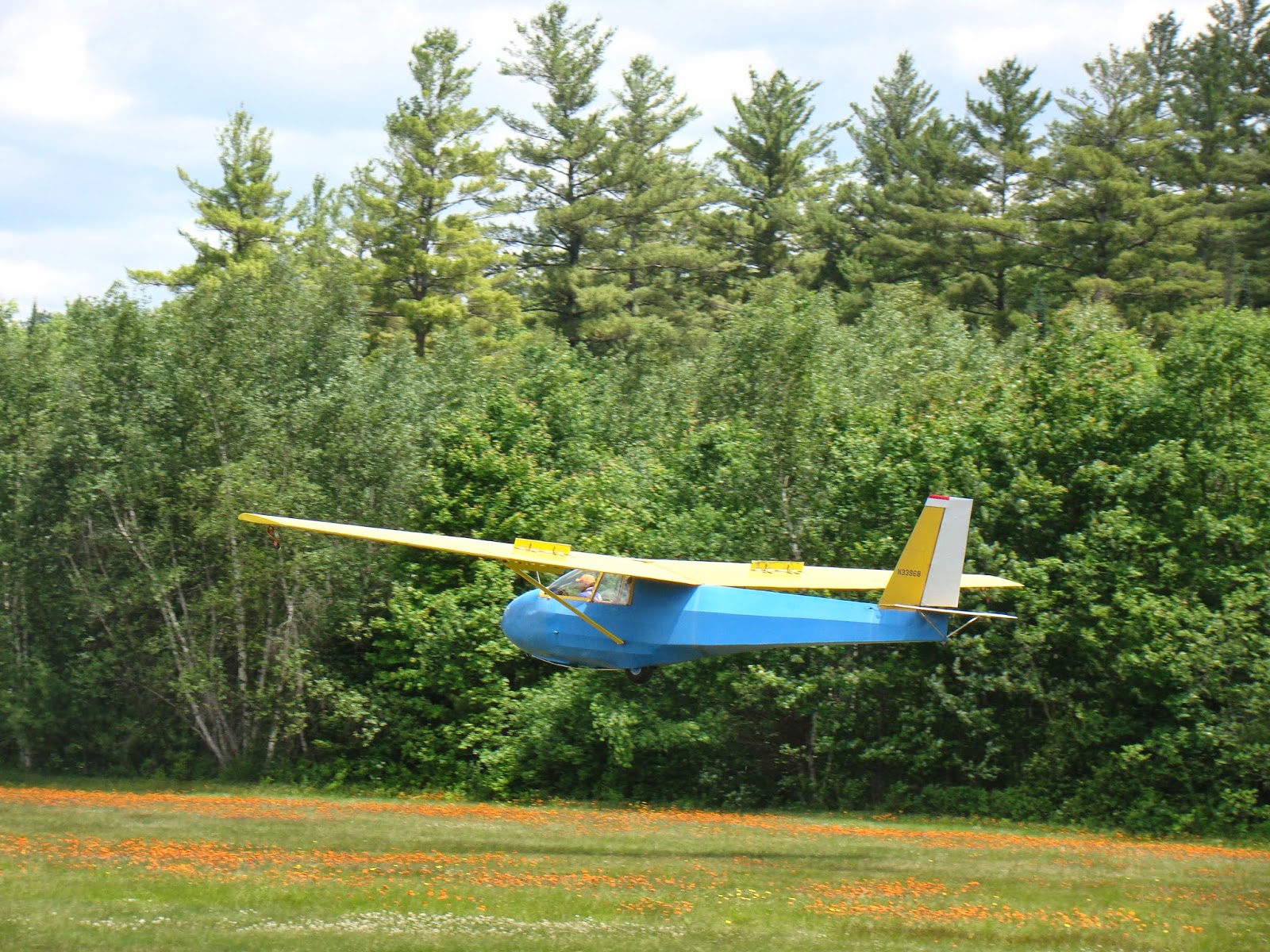 A local pilot we spoke with had just landed and said the strong winds were making for very bumpy flying.

The weekend concluded with a lovely, summer solstice sunset - as far north as it ever sets.  Today gave us 15 hours and 32 minutes of sun! 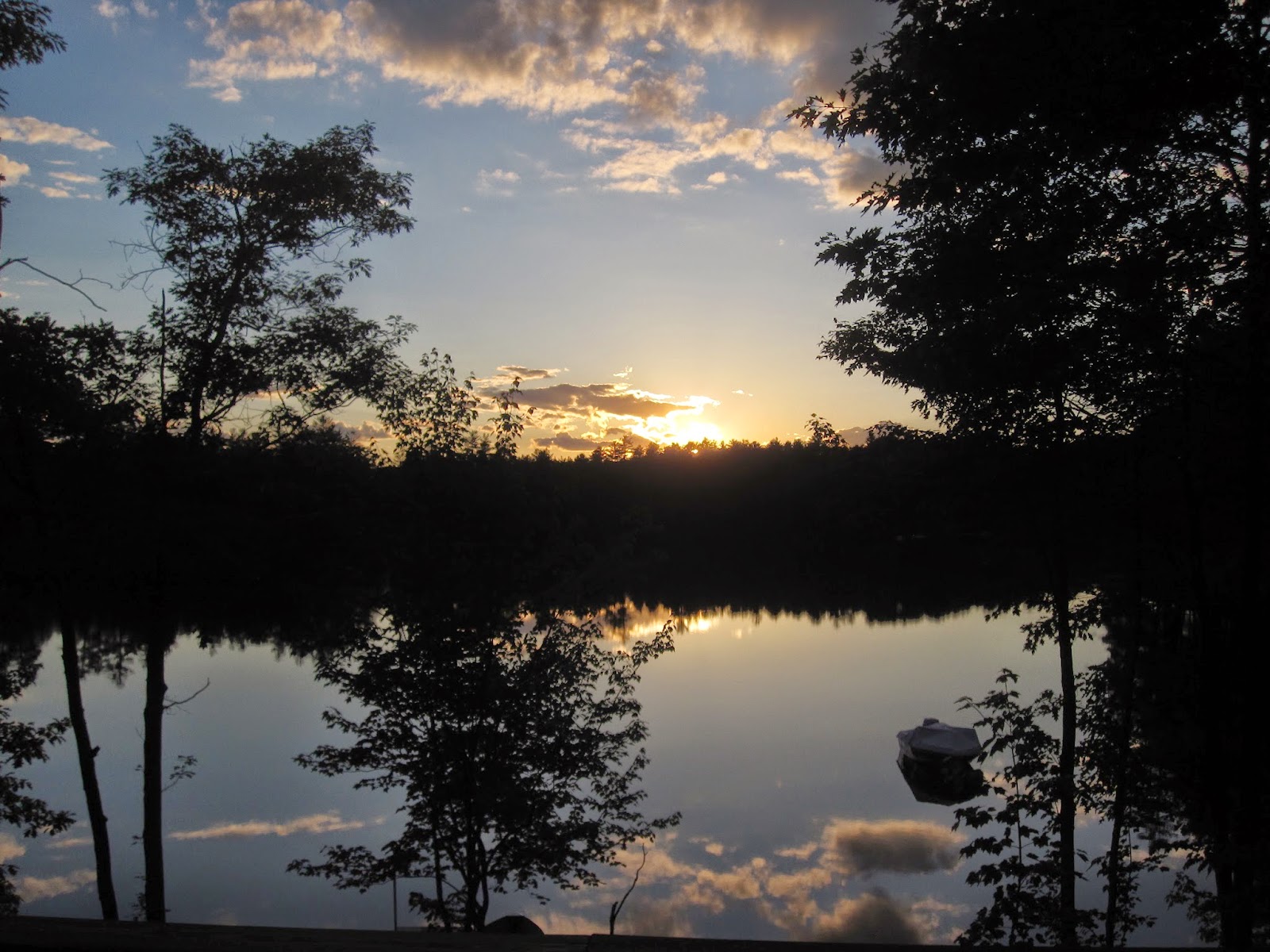 Posted by Scott Powell at 9:48 PM No comments:

Happy Father's Day!  And thank you to all who sent your wishes my way!

Father Robin should be proud of its labor, as both he and mother robin continue to spend many hours collecting ants, worms, caterpillars, and other insects to feed their young.

The young are getting larger, and the nest is starting to get crowded.


It has been about 12 days since the chicks hatched, so they should be leaving the nest any day now.

On a run along the ridge behind Lake Wicwas, right on the Yellow Trail, I saw a bright green ball on the ground.


One often finds these Oak Galls in the fall when they are brown and dried out, but less commonly in the spring.  This one may have been blown off its oak leaf by the strong winds this weekend.  I couldn't resist stopping to open it up, as I have never really been able to understand just how these unique formations work.  They are instigated by the Oak Apple Gall Wasp (Amphibolips confluenta), when the female wasp lays a single egg inside the central vein of an oak leaf.  As the egg develops it excretes a chemical that causes the oak tree to form a gall around the egg, creating a protective shield.

On the inside I found hundreds of tiny filaments connecting the egg to the inside surface of the gall. 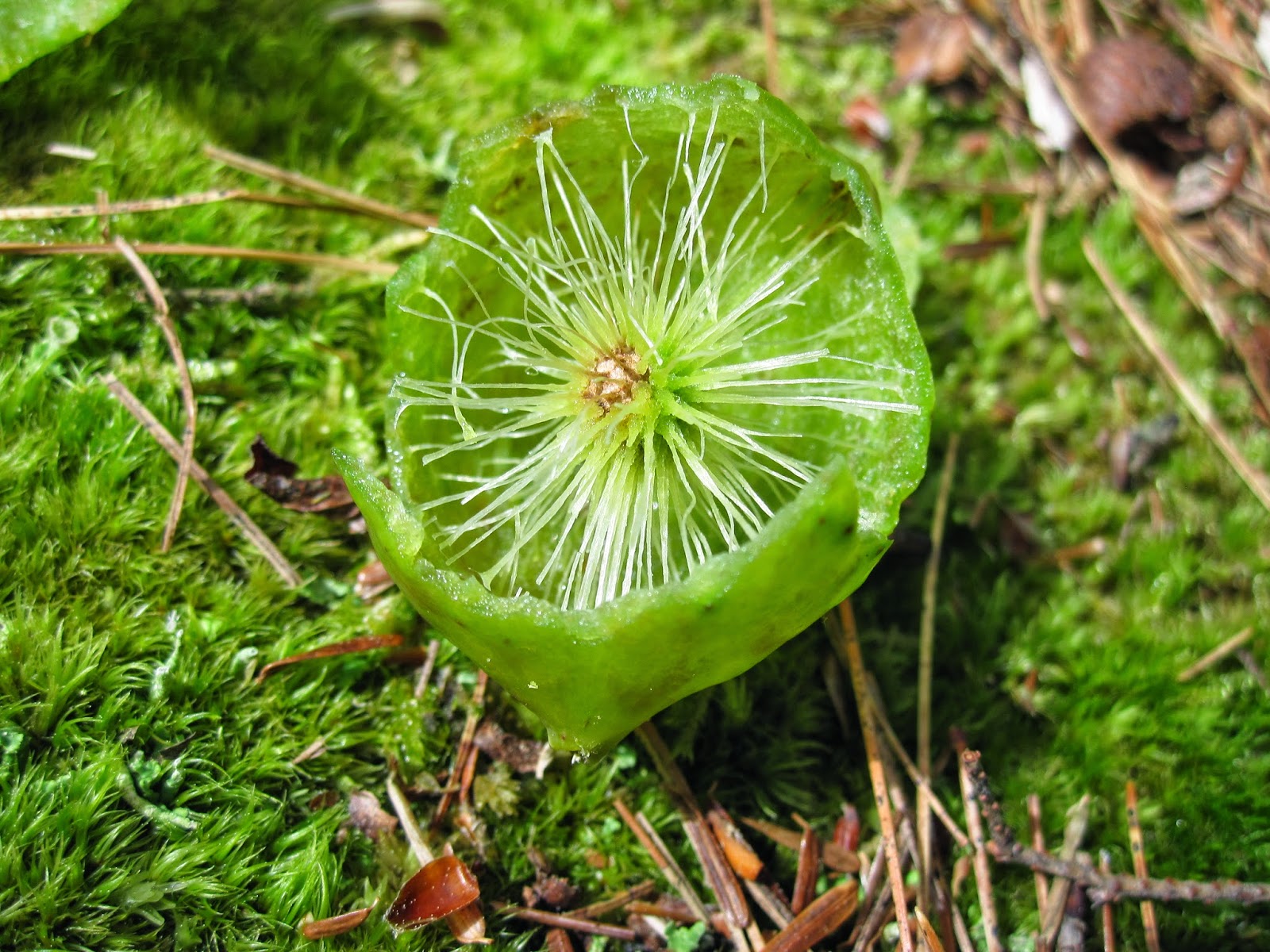 I surmise these connections are propagated by the oak tree as a result of the egg's secretions, and provide sustenance for the egg like a hundred umbilical cords.  I cracked open the inner egg shell with my thumbnail and found the tiny, not-yet well-formed lava inside.

This is not a synergistic relationship, as the wasp doesn't provide any benefit to the oak tree, but it is not a harmful relationship either, with the gall not injuring the tree.  It is an example of "commensalism" - an association in which one organism is benefited and the other organism is neither benefited nor harmed (credit Terry Gouthro).

Closer to the edge of the lake I discovered another new species for me:  a Rosy Maple Moth.

This is another rather finicky insect, feeding predominantly on - what else? - maples, especially red and striped maples.  Only the caterpillar feeds - the adult moths do not eat;  once they emerge from their pupae they search for a mate and lay their eggs on, yes, a maple leaf.  They are pretty neat-looking moths, with furry bodies, purple legs, and big black eyes. 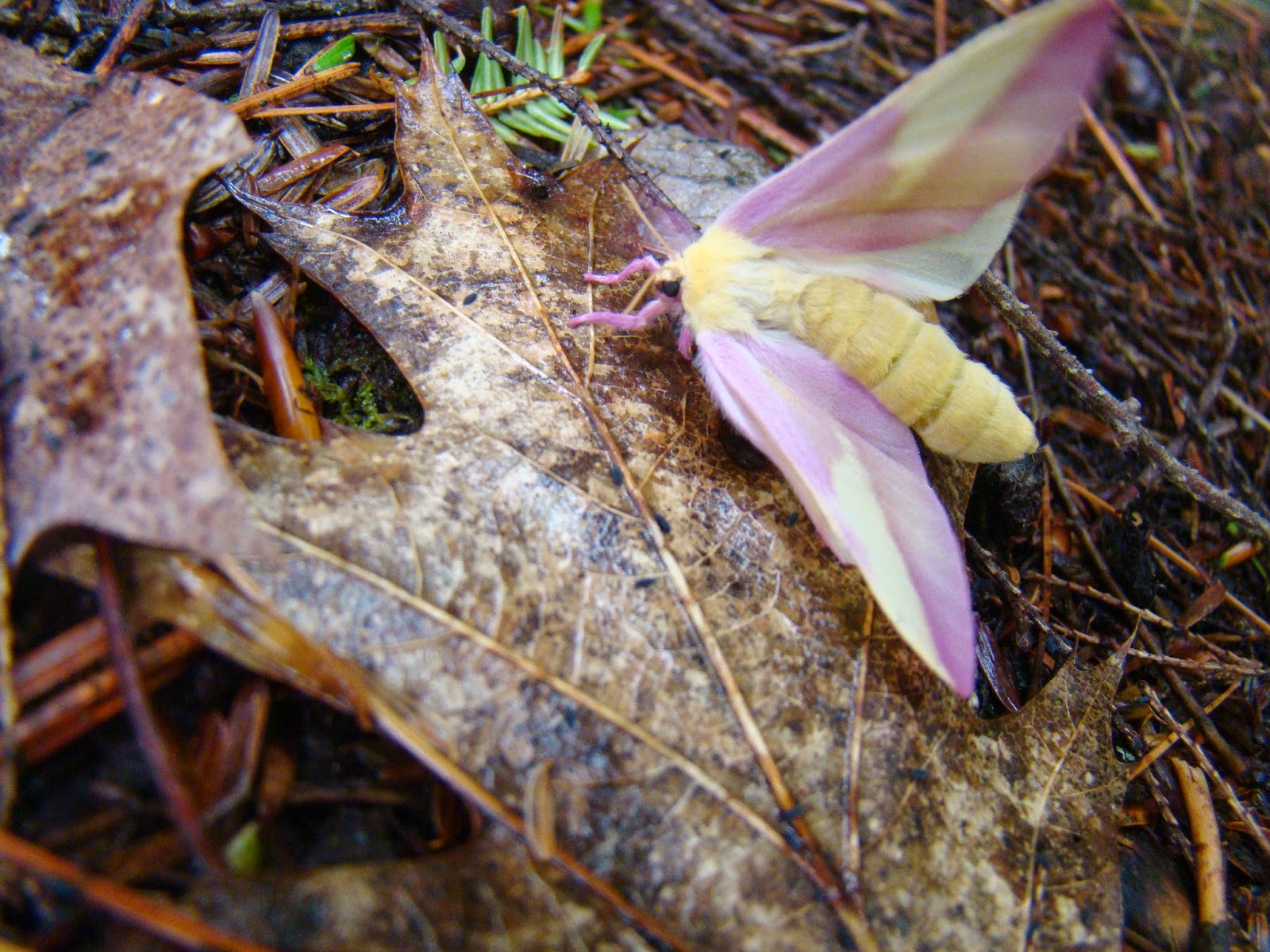 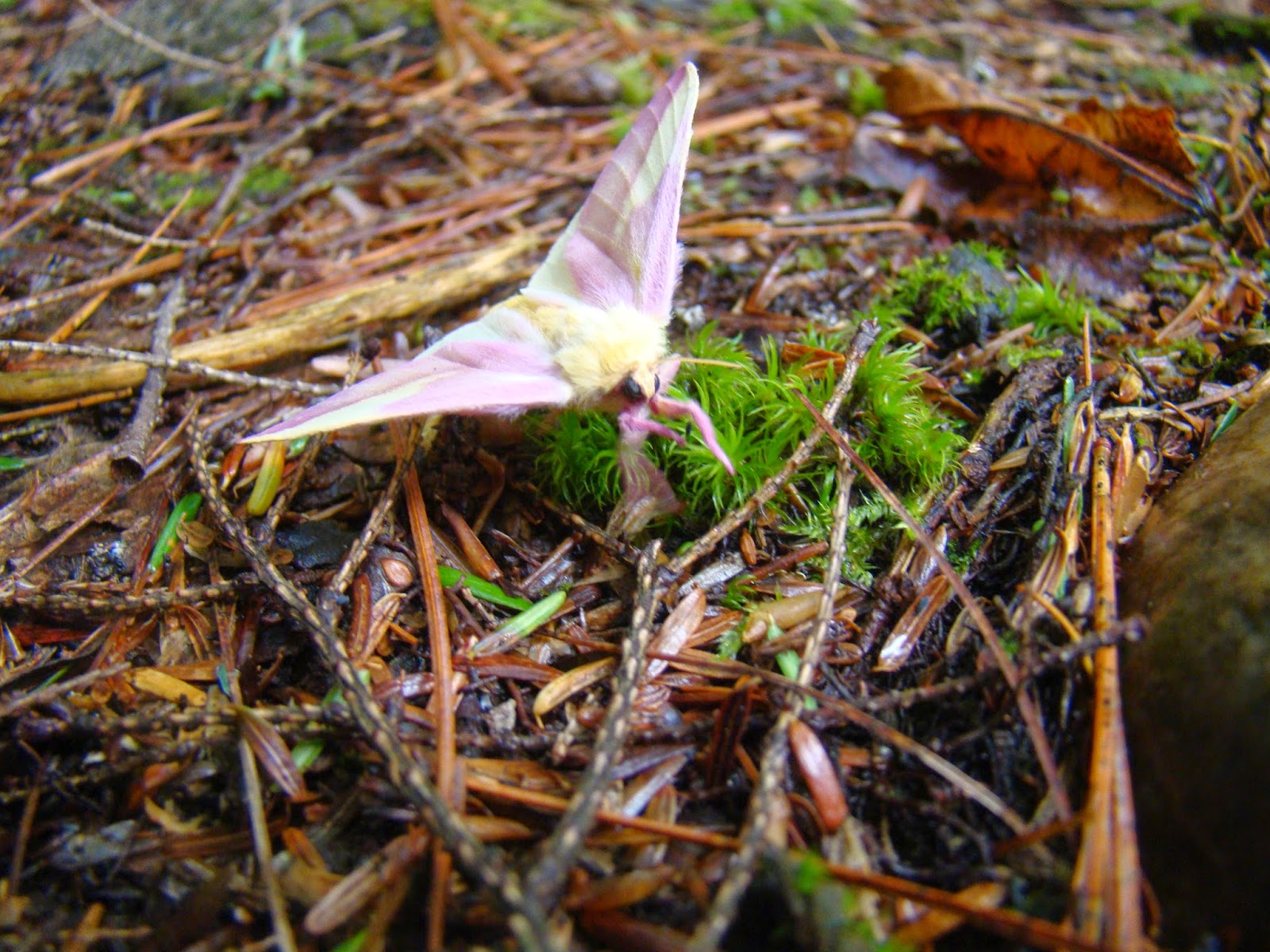 In a complete coincident, someone gave me an article written by Cheryl Kimball in the Union Leader (thank you!) that spoke of these very moths (Nature Talks, June 13, 2014).

One last note for the Wicwas wildlife journal:  New deer will be joining the Lake Wicwas community soon.  This shy doe was peeking out from the undergrowth near the lake. 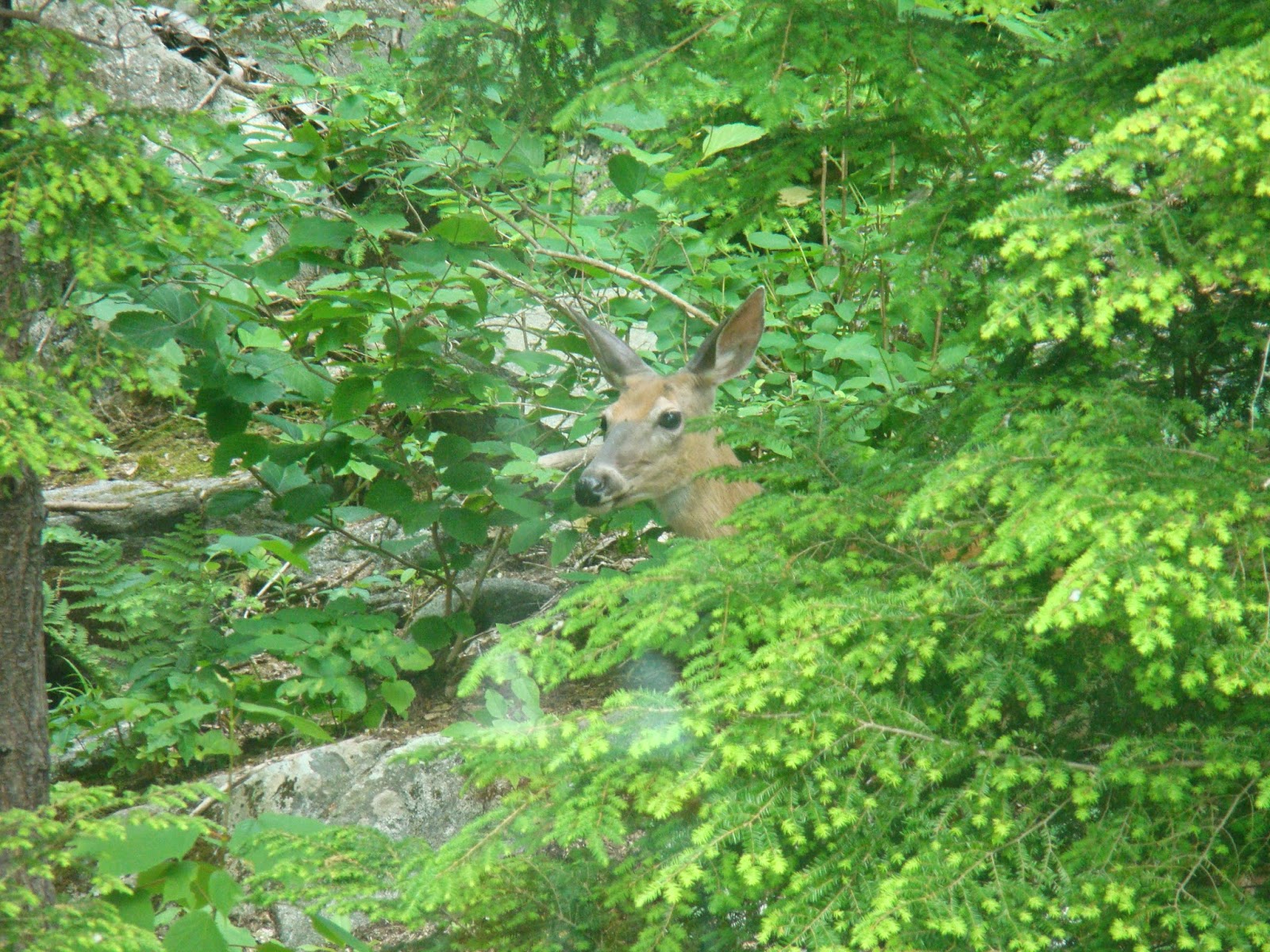 She eventually emerged and worked her way along, enjoying the tender, new growth. 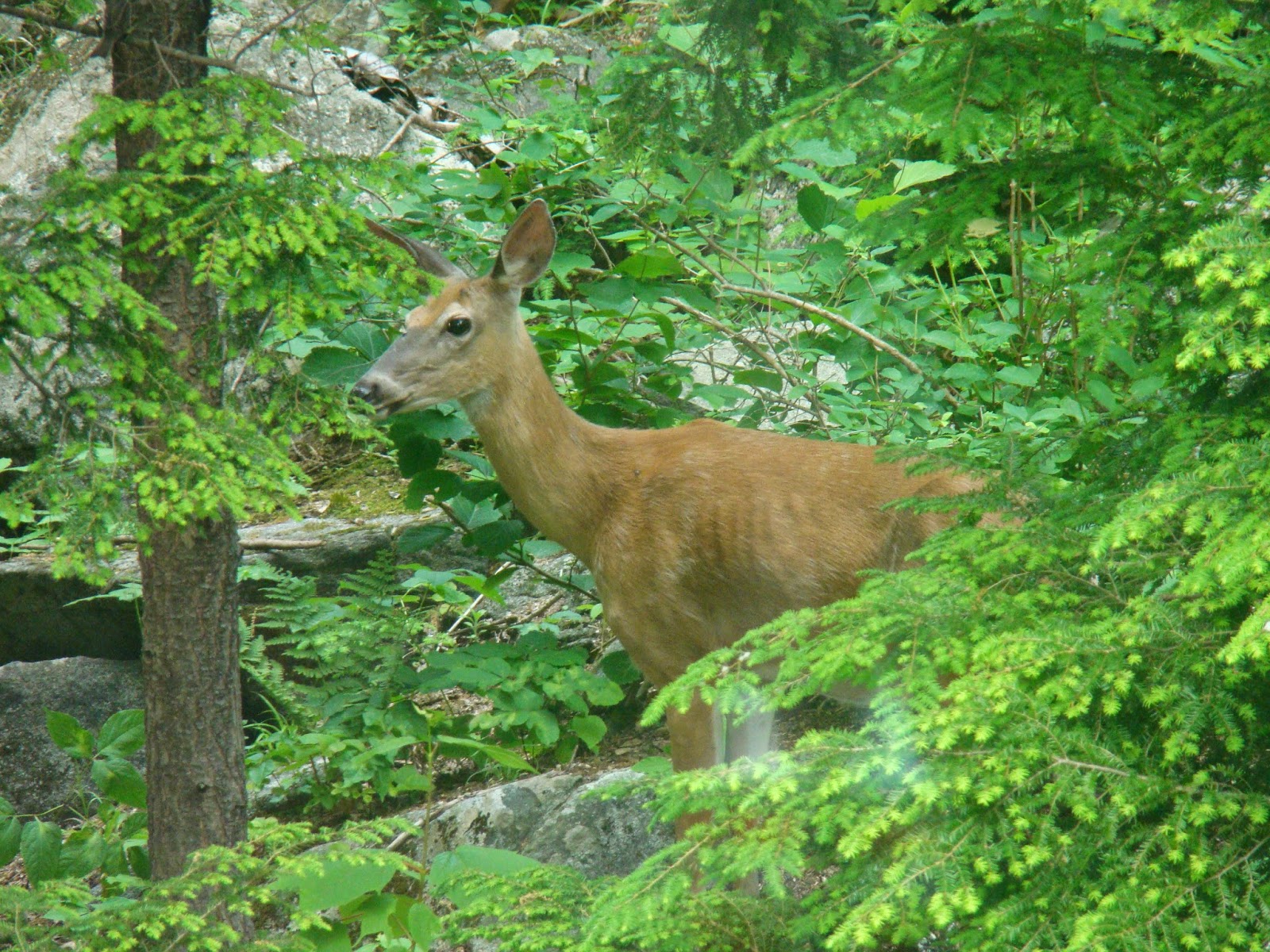 When she stopped to scratch, it became evident that there will be another proud father celebrating Father's Day next year!
As I was writing this I decided to do one last check on the robin nest, and wasn't I surprised to see only one chick left - the other had fledged!


And I was even more surprised when just after I took this picture, this little guy took its first flight too!  We saw it embark on a not very graceful, but nonetheless successful flight of about 20 yards to a smooth landing on a nearby tree, and already flaunting some robin color.
I couldn't see them, but I'm sure its proud parents were close by, watching and encouraging it.  What a great Father's Day for this new dad!
Posted by Scott Powell at 8:22 PM No comments:

I was awakened this morning by the sharp call of an Osprey from  the open window.  A few minutes later I heard the explosion of water that is distinctive to an osprey crashing into the lake to catch a fish.  Osprey make a striking sight and sound, as they actually plunge under the water, talons first, to catch a submerged fish, unlike an eagle which is more likely to glide over the water and extract its prey with just its claws getting wet.  That sound brought me to the window, where I saw two osprey circling, one with a small fish in its grasp;  it landed on an oak with a large dead branch hanging over the lake - the osprey equivalent on breakfast on the deck!  I didn't get a picture, but here's one from Lake Wicwas in 2012. 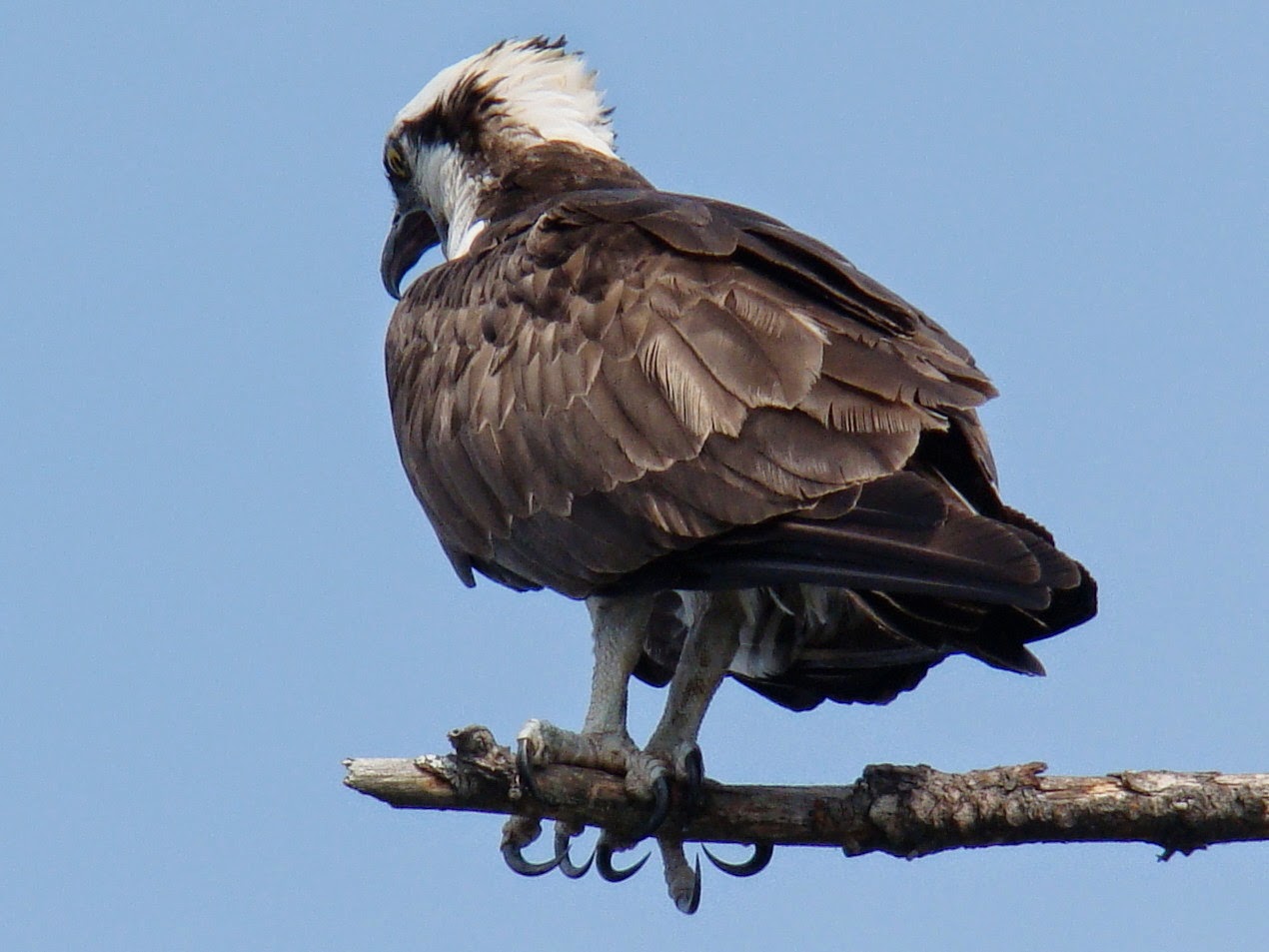 Those poor fish don't seem to have much of a chance against those weapons!

I was busy last weekend with concerts, and a lot has changed in two weeks.  Perhaps the greatest transformation took place in the Robins nest, where four blue eggs turned into three little chicks.

This picture was taken on June 5th, 18 days after the first egg was laid (May 18 post)  It looks like two of the chicks are several days older than the littlest one, which still has its eyes closed.  The next morning, however, the little one was gone.

Perhaps it wasn't viable, or perhaps mother decided it couldn't support three chicks.  Either way - nature can be cruel.  Over the next two days the remaining chicks grew quickly, with distinct feathers appearing by today.


Mother has been very busy collecting ants and other insects to keep them nourished.

A couple of less dramatic changes occurred in the woods, with the Black Cherry blossoms converting into tiny green cherries.

In a couple of short months these will be attracting Black Bears.

The bunch berries also came into bloom - red berries will follow next.

One thing that didn't change very much is the status of the Lady Slipper - this orchid has a long bloom period, and can still be found in many places - this one is blooming right beside the Yellow Trail, perhaps half a mile from the trail head in the Hamlin/Eames/Smyth conservation area.
Perhaps you have seen it also!

Posted by Scott Powell at 9:22 PM No comments: