As the labor day holiday approaches, signs of the waning summer are becoming hard to ignore even though we continue to be treated to glorious summer weather.  Sunrises are later and have moved noticeably towards the south compared to their June horizon crossings.

At one of those sunrises I had my first good look this summer at a local osprey, its underside brightly illuminated by the sun as it flew overhead.

Another tell tale sign of late summer is revealed on cool mornings when the warm lake dislodges  water molecules into the atmosphere which are immediately condensed into low hanging fog.  The sun shining through the layer fashions some of the most ephemeral scenes on a lake.


The fog has long cleared by noon time, providing clear skies with long views from the lake shores and hilltops.  Here is a view of the white mountains from the top of Arbutus Hill, just west of Lake Wicwas.

The summit of Arbutus HIll is accessible from the Hamlin trail head - follow the Yellow Trail to the Magenta Trail, through the Smyth Conservation Easement and up to the view point on Arbutus Hill.  It's just over a four mile hike and well worth the trip.  Here's a link to the trail map.  (This and other maps of hiking trails in Meredith are available at the Meredith Conservation Commission website.)

While you're hiking in any of the conservation areas in Meredith you are likely to come across something interesting, whether plant, animal or mineral.  And as fall approaches, both plants and animals will become more evident (the minerals don't change their behavior so quickly).  Listen for the chopping of a woodpecker - it will usually be a downy or a hairy woodpecker, but this week I heard the loud hack of a Pileated and was able to track it down using the sound as a beacon.

He (note the red mustache) was kind enough to continue his work on the oak tree so I could get a video, complete with wood chips flying into the air.  The blog doesn't like video, so I posted it on youtube here.

I also saw a Great Blue Heron, though not in its usual venue in the water, instead stalking some small morsel right through the woods at the edge of the lake, probably a frog or a toad. 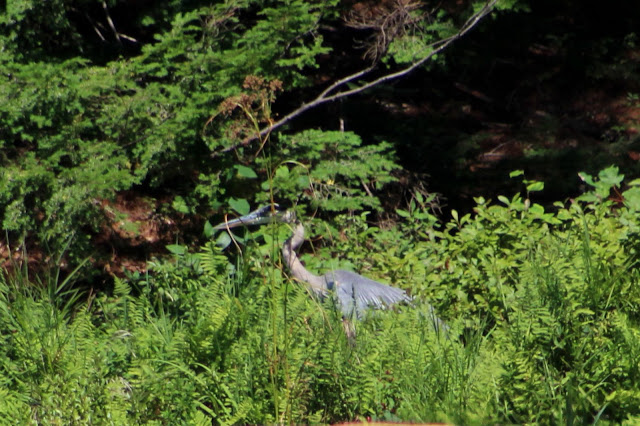 On the plant side, the Speckled Alder are starting to develop their seed cones.

The cones are actually the alder flower and are called catkins.  Alders are important trees for many animals;  moose, deer, and rabbits take advantage of their low and thick cover, and mammals such as beaver, muskrat, rabbits and moose browse on their bud, twigs and foliage.  Many birds eat their seeds and buds, including redpoll, grouse and woodcock.  It is also a favorite of beavers for use in their dams and lodges as it is quick to regenerate.  [Ref: USDA National Plant Reference Center]   Alder has medicinal applications and has even been used to improve water conditions in shrimp tanks!  [Ref: The Planted Tank]

Remember the pretty trillium back in May?  Well, by late summer those tiny plants have turned into giant leafy creatures, and their flowers have developed large seeds.

How things change over the summer.

With a little bit of rain this week combined with shorter days and cooler temperatures at the end of August, mushrooms are starting to come on in force.  I believe this is the tiny Orange Mycena, less than an inch tall.

Look for many more varieties of fungi to sprout up during your forest walks as fall approaches.

Posted by Scott Powell at 7:48 PM No comments:

The weather was perfect yesterday for the premier event in the entire Lakes Region:  The Seventh Annual Lake Wicwas Paddle Regatta.

The event was coordinated and graciously hosted by Lavon and Wayne Blake, who organized a great paddle that brought us to some of the more intriguing and little known areas of the lake.

In the pursuit of marked treasures along the path the paddlers explored both the wide open lake and remote corners with winding paths, beaver lodges and beaver dams.

At one point were sitting two or three feet below the water level of a dammed pond just beyond our shoulders.

Safety was assured by the escorting committee boat. 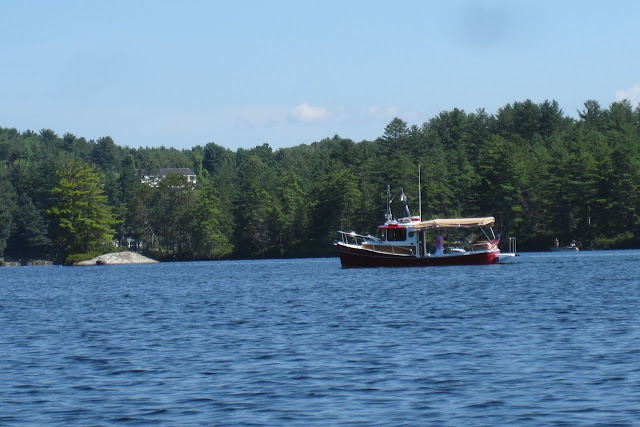 They were also there to enforce the rules of the regatta, which is not an easy assignment considering there aren't any!

And it wouldn't be a day on Wicwas without some wildlife, so a great blue heron made an appearance to make the event complete.

Of course, the highlight of the day was visiting with friends from around the lake.  (And maybe sharing some great food, from awesome burgers and pulled pork to homemade key lime pie.) 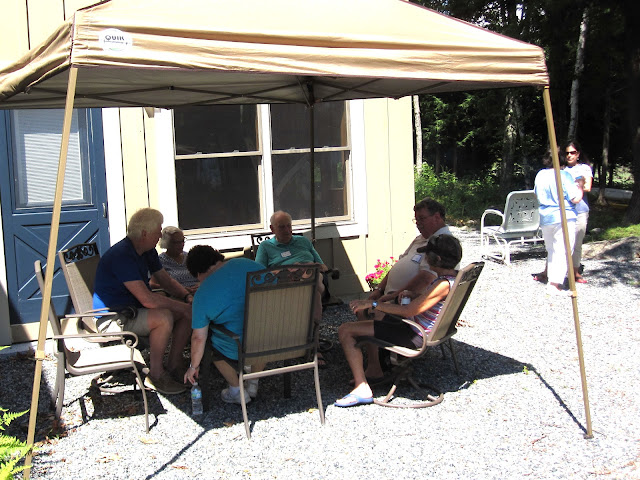 All in all it was a perfect day for a paddle on the lake, a few games on land, and visiting in the sun or shade. 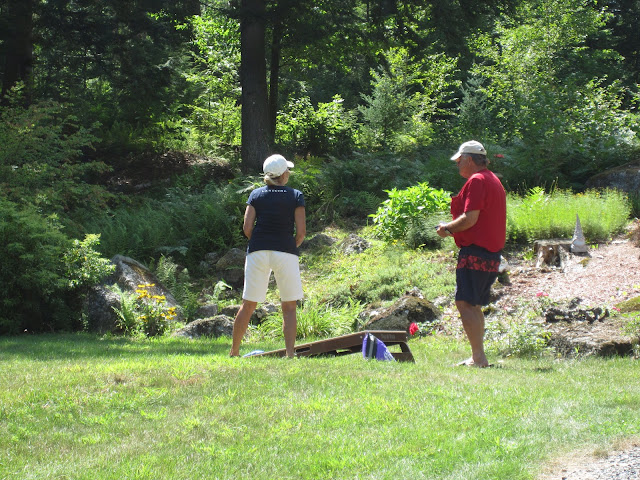 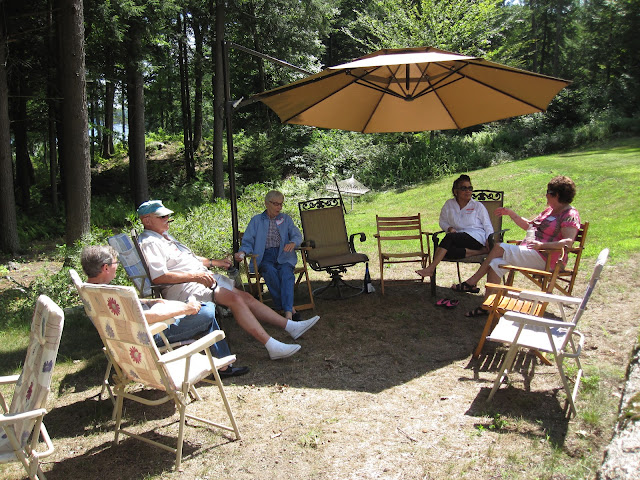 A tremendous thank you goes out to our hosts!  And if you didn't make it this year, be sure to put it on your calendar for next year - everyone is welcome whether you come by land or by sea!


Posted by Scott Powell at 7:43 PM No comments:

The blueberries are gone now, but a new color has taken over to brighten up the forest on our mid-summer walks around Lake Wicwas.


The summer wildflowers also add to nature's rainbow to brighten the day. 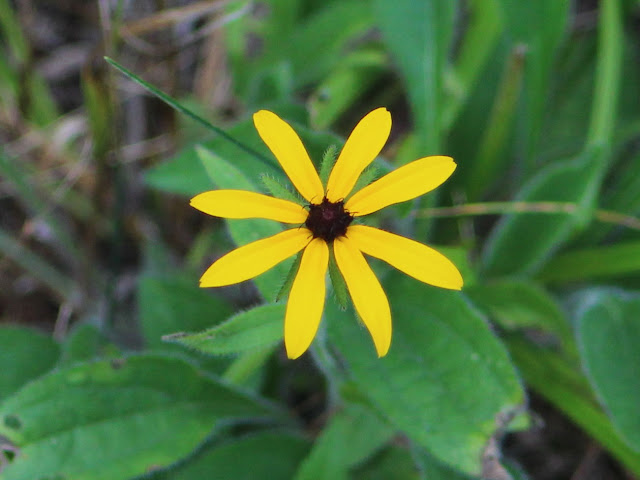 Sometimes the palest of colors make a delicate scene on the calm lake.

I'm no expert on feathers, but I wouldn't be surprised if this is the soft down from the inner feathers of a loon left behind from preening itself in middle of the lake, as ducks and geese usually do their grooming close to shore. 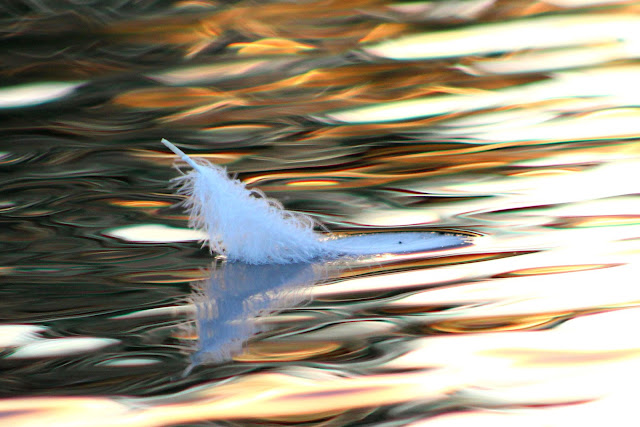 On the topic of loons, there are still five on Lake Wicwas, two pairs and one rogue, trying to work things out among themselves.  For years I have always seen these beautiful birds as such quiet and peaceful animals, but the last two years have taught me that they are just as fierce as many other creatures when it comes to protecting their territory and ensuring the propagation of their genes.  The first lesson came last year when another loon killed the chicks of our long-term nesting pair.  And throughout this summer we have watched the behavior of the loons fighting over the lake, preventing either pair from nesting.

They keep a close eye on each other;  one game they play is swimming around in a circle in close formation, staring each other down.  I call it ring-around-the-rosy, but I don't think it's a happy game for them.

Maybe it's the loon equivalent of a staring contest.

There was another behavior I saw for the first time this week.  When a single loon or a pair are by themselves on the lake I have always seen them just floating calmly or swimming along slowly and sedately.   But one morning, I saw a V-shaped wake far down the cove.  It was moving straight as an arrow with a speed and purpose that made me think it was a beaver - beaver always swim with a mission.  But as it came closer I saw it was a pair of loons.  They steamed straight down the middle of the cove, all the way to very end, where they did an about face and steamed right back out again at the same clip.  I expect they were on a mission to find the other loon pair to reassert their ownership of the lake.

Loons as well as humans were treated to some beautiful sunsets this week. 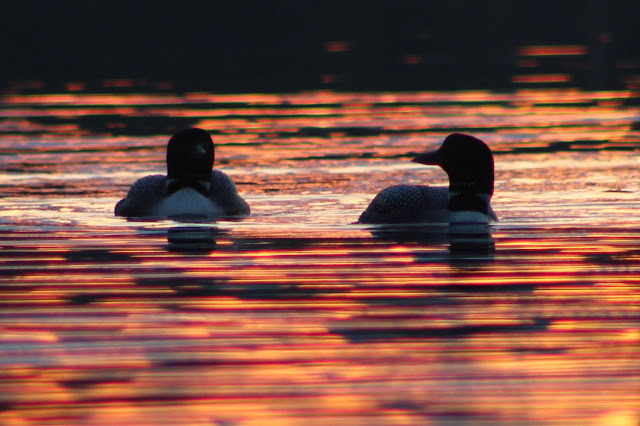 Perhaps you saw on WMUR-TV the unique sunset that appeared over Meredith on Friday.  It was visible from Lake Wicwas as well, looking towards the west;  a thunderhead building with the late-day sun striking it, splaying a dark shadow up a across the sky. 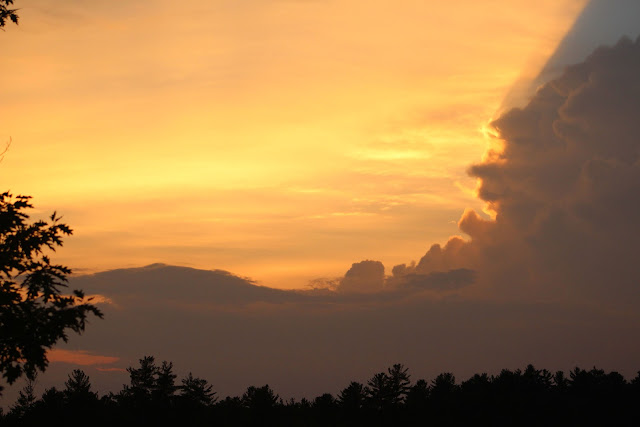 It's no wonder the loons are fighting over Lake Wicwas. 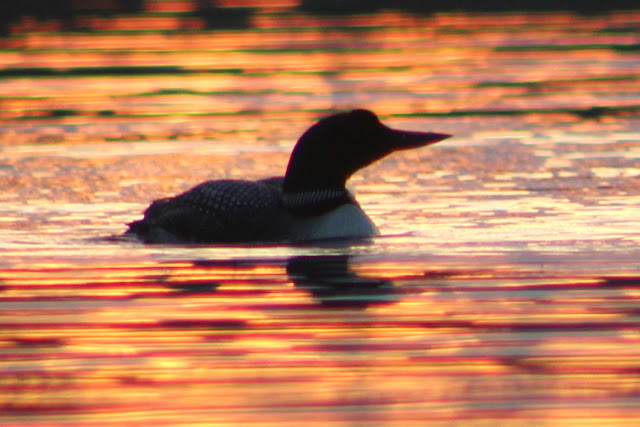 Posted by Scott Powell at 10:25 PM No comments:

It is a quiet time of year, these hot, humid, lazy days of summer when even the animals take a break from their active schedules.  Food is plentiful and the rearing of the young is at a point where parents can relax a bit, although it doesn't mean you still won't run across a moose in a swamp or a bear in the woods:  a friend who is an avid hiker and mountain biker came across a bear on a mid-day ride.  The bear, which I'm guessing was a mother with cubs, stood her ground in the middle of trail, forcing him to backtrack and find a different route.  Better off not to mess with momma bear....

I didn't see any large animals this week, but lots of smaller ones were enjoying the warm weather.  On one morning kayak I came across a mixed flock of birds moving along the trees on the shore of the lake picking off insects of all forms for their breakfast.  There were chickadees and yellow warblers plucking caterpillars off  leaves, woodpeckers grabbing ants and eggs from trunks, and kingbirds and phoebes snatching adults right out of the air.  These flycatchers are the most fun to watch as they launch from a bare branch, perform a few acrobatics over the lake to catch their prey, then alight back on the branch to watch for another victim.  It's a precarious life, that of an insect.

And sometimes it's pretty easy for birds to get a good meal.  I noticed this lovely swarm of caterpillars munching away on the bottom of some leaves, doing a pretty good job of decimating the tree.

I didn't know what they were, and it took some work to figure it out, mostly because, as I found out, they aren't technically caterpillars.  I learned that "caterpillar" applies specifically to the larvae of butterflies and moths, and these are the larvae of a wasp - the Dogwood Sawfly wasp.  Although it is in the wasp order of insects, it does not sting.  I'll keep an eye out for adults next week.  (In case you were wondering, yes, that is a dogwood they were feeding on.)

And it must be the season for longhorn beetles.  Two weeks ago I saw the tremendous Pine Sawyer, and this week I saw its little brother, the Black and Yellow Longhorn beetle drinking nectar from the Meadowsweet flowers.

I saw one other really neat insect this week while doing work on the Fogg Hill conservation property just north of Lake Waukewan - one of the strangest bugs you'll find, and one that isn't often seen:  the Northern Walkingstick.

The reason I rarely see them is their great camouflage - they look like sticks!  I only saw this one because it came to me - it ended up right on my backpack, probably when I brushed by it.  This one was almost three inches long.  The male walkingstick is brown, so this is a female.

The one large animal I did see this week was pretty easy to find.

This handsome heron spent at least half an hour in the early morning just perfectly balanced on one leg watching the sun rise.  It wasn't fishing or frogging, but just standing there watching the day unfold.

On occasion it would do a little preening, and as it ruffled up its feathers it looked an awful lot like the patriarch of Lake Wicwas, wise and grey, with its long flowing beard giving testament to its stature on the lake. 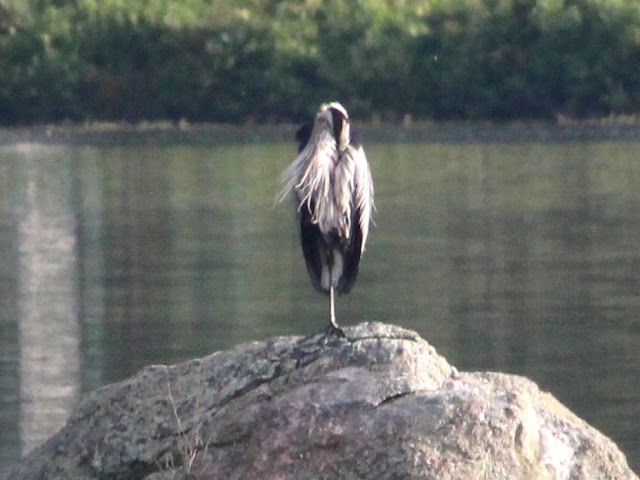 Birds and insects - the most active creatures during this hot summer week.
Posted by Scott Powell at 8:49 PM 1 comment: