Sugar season is in full swing right now and central New Hampshire is having an excellent year.  Yesterday I went to the Maple Sugar Day at Burleigh Farm in Holderness, which was holding demonstrations of their sugaring process, tours of the sugar bush, and most importantly, tastings!

The event was sponsored by the Squam Lakes Conservation Society, Squam Lakes Association, and the Lakes Region Conservation Trust which holds the conservation easement on 1500 acres of forest and farmland that protects the home of all those maple trees.  A knowledgeable team was on had to explain the process and answer everyone's questions.
The farm has taps in 3400 sugar maples which all flow via tubing, under vacuum, directly to the sugar house, allowing them to produce over 1600 gallons of maple syrup each year.
One benefit of this system is that the sap doesn't contain all the bark, bugs, and other detritus that found its way into the sap with open collectors.  Unless, of course, a coyote or a fox decides to chew on the tubing and tear it open.

With that quantity of sap to process, the sugar house has been updated with modern technology.  The raw sap is processed through a reverse osmosis membrane system which concentrates the sugar content from about 2% straight from the tree up to 14% after two passes through the system.

This greatly reduces the amount of boiling required.  After being concentrated by reverse osmosis it is finished in a good old fashioned open boiler, but heated with oil or propane rather than wood.

But from the outside, it has all the appearance of a traditional New England sugar shack. 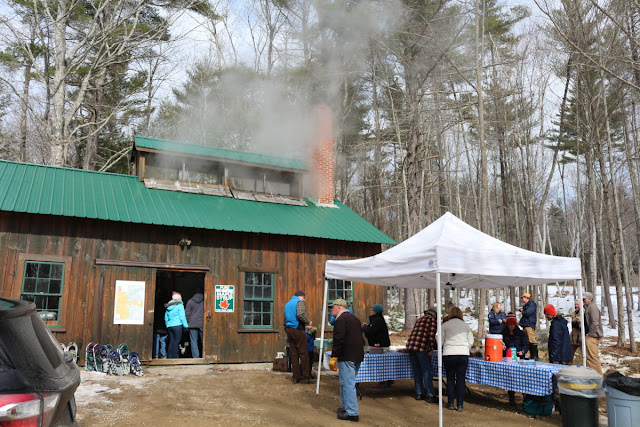 Later, back closer to home, I saw that the Chemung Gang sugar shack was boiling away as well, still doing it the good old fashioned way!

The lakes sure don't look much like spring, but nonetheless there was a nice reminder that spring is coming:  I saw my first loon of 2018 fly overhead one afternoon - apparently we are not only ones watching the lakes, waiting to see some open water.  And wait we will, as there are still 21 inches of ice on Lake Wicwas.
That photo was taken after the most recent snow storm (for us that is - we missed the fourth nor'easter which hit only the southern part of the state).  What is so intriguing for me is how tracks in the snow change over time.  Those depressions formed by snow shoes were completely inverted after just a few days of wind and sun acting on the snow - five days later those indentations had become convex bulges sticking up above the surrounding snow.
After the storms we had more perfect blue-sky days luring me out onto the trails.
I knew apples must still be around due to seeing fox and coyote scat containing apple skin, but it was neat to see some still hanging on their branches.

A final note, as bears are one of those hungry, spring animals, NH Fish and Game reminds us:  Spring is Here: It's Time to Take Take Down Birdfeeders!
Those loons aren't the only animals out in search of spring.

It was another eventful week in New Hampshire as nor'easter number three blew through the region pushing warm air ahead of it, heavy snow during it, and the usual blast of cold, clear weather behind it. 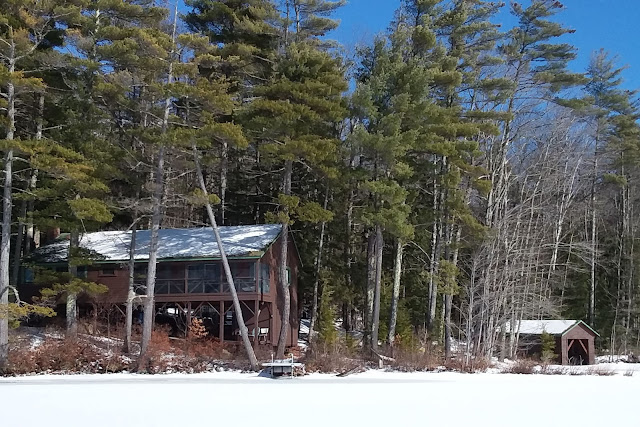 On a warm day before the storm I went up to Arbutus Hill Pond in the Eames Conservation Area to see what was happening on the beaver ponds in late winter/early spring.  Walking in I came across the occasional coyote or fox track, but as soon as I neared the pond the animal activity increased dramatically, with otter, mink, and weasel tracks all around.

It's no surprise that, as scientists are finding and documenting in books such as "Blue Mind" [Wallace J. Nichols;  Little, Brown, and Company, 2014], being near water makes us healthier and happier; water has been attracting, sustaining, and evolving life for millennia.  And that's in addition to the fact that it's just plain beautiful. 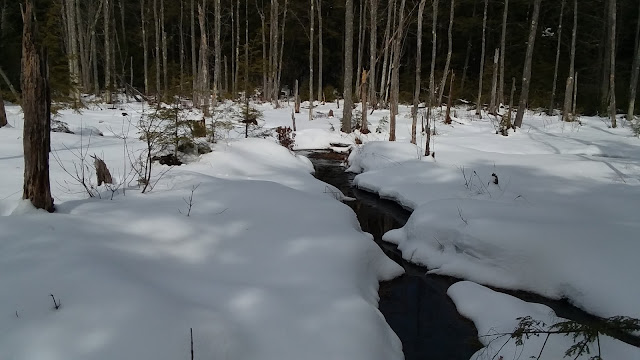 Water isn't the only thing that attracts animals - trees, plants, and their fruit are also large draws, bringing in forest animals such as birds and rodents, especially when concentrated into feeding stations.  And these in turn, bring in the predators.  A bobcat made several visits along Wicwood Shores Road before the latest storm, and thanks to Marge Thorpe, we have some great proof.  Look as this feline, sitting on someones doorstep just like a cute little house cat.

But let it turn its head, and its clear this is no domesticated animal.
The source of its attention was a collection of birds and red squirrels.
As seen in this picture, it is breeding time for squirrels, and I kind of hope the kittens of this nursing mamma aren't orphaned by a hungry cat, but sometimes that's the way nature goes.  And at this point female bobcats are gestating their young, so at least it would nurture a different new life.  Bobcats typically have two or three kittens, but in a high food year they may have up to seven [wildlife.state.nh/wildlife/profiles/bobcat.html].

Thank you Marge for sharing the great pictures of wildlife in New Hampshire!


Posted by Scott Powell at 2:48 PM No comments:

It was a week of contrast in most of New England, even throughout much of the Northeast, as the second nor'easter in six days passed through.  The week started like this 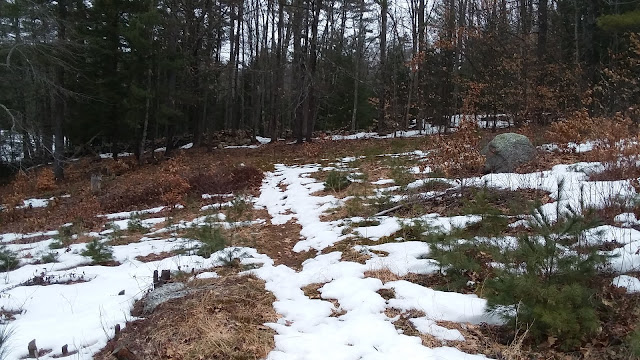 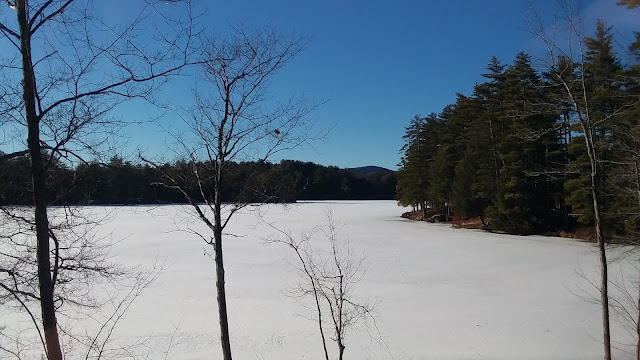 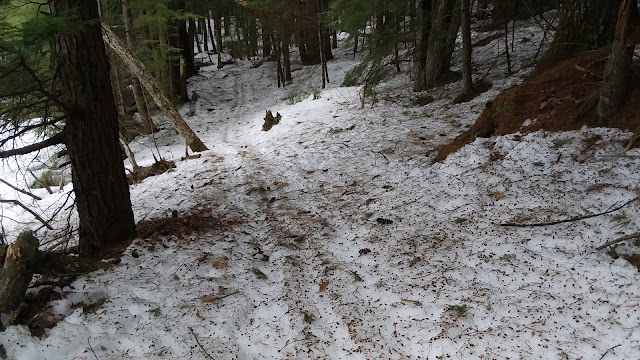 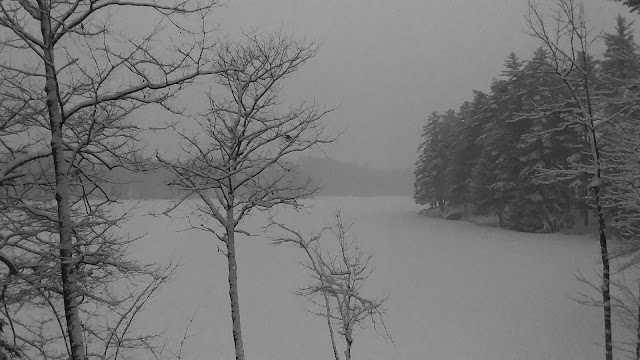 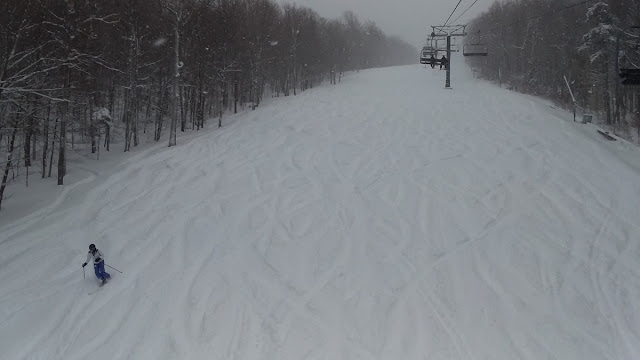 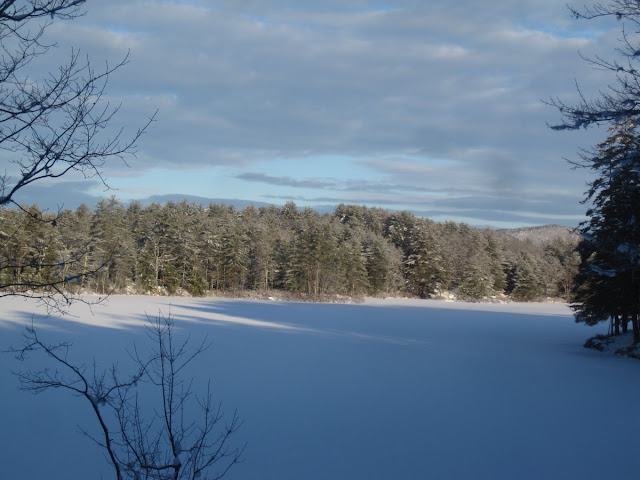 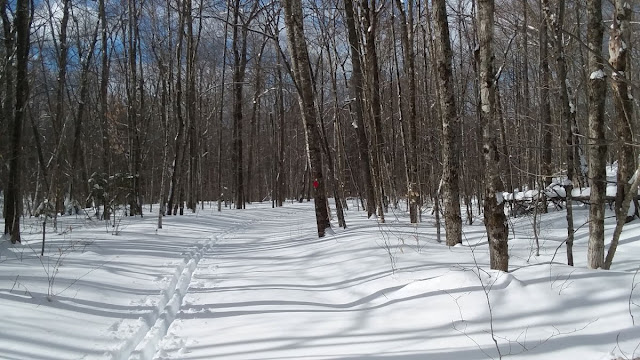 The 12 to 15 inches of dense snow resurrected the skiing and may have averted an early end to the season for many ski areas.

Fresh, pristine snow always entices me out on the snowshoes, and on Friday I crossed paths with our local bobcat, so I followed it along for a bit as it wound through the woods.  It took a good part of a mile before I found a print that was clear enough to confirm I was following the path of our only wild feline.

Nothing of note was observed from the cat, but one of the perks of following tracks is being taken places you've never been before - or would never go on your own volition:  through dense hemlock stands, across (barely) frozen swamps, and up ledges, all of which an 18 inch tall, four pawed creature thinks nothing of traversing.

This particular bobcat led me on a trip where I discovered an old relic from New Hampshire's agrarian past. 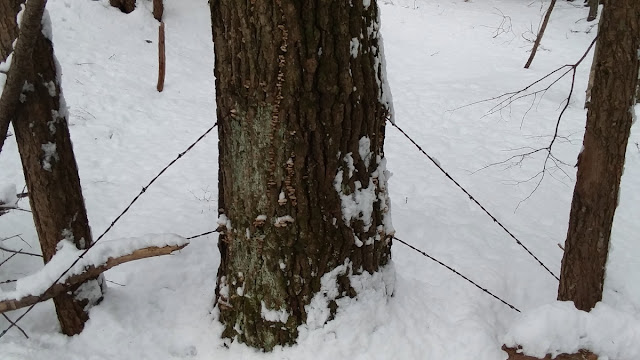 I love finding these old barb wire fences passing through the center of sizable trees. 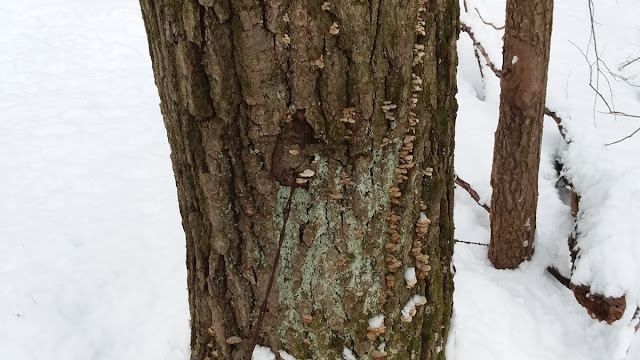 I'm no expert on tree aging, but this red oak could easily be 100 or 125 years old, and since the wire is pretty close to the center it means the fence was set when the tree was just a tiny sapling, dating the wire to perhaps the late 1800's.  This recalls a different contrast in the New England landscape, one that happened slowly over the better part of a century.  A hundred years ago this land as well as most of the Lakes Region and much of New Hampshire was completely cleared of forest for farming, for lumber, and then for grazing.  Picture all the land around the lakes as fields rather that forest;  it's a stark contrast that happened slowly over so many years it was hardly noticed.

Another tree farther down the fence line has died and almost completely rotted away, again showing the age of the fence.

It appears that scar tissue grown to isolate a foreign object is more rot-resistant than the rest of the tree. 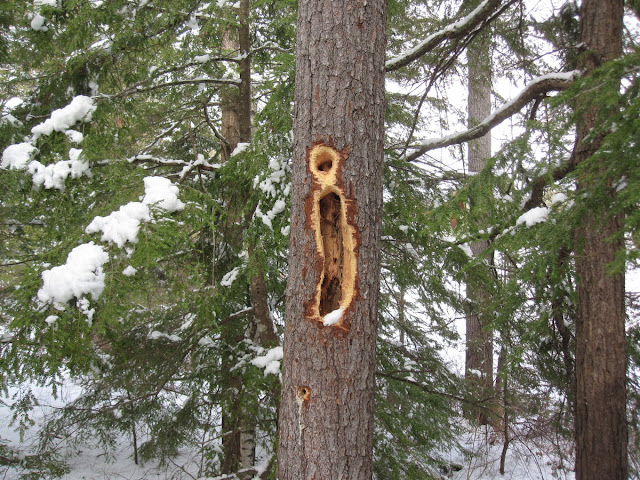 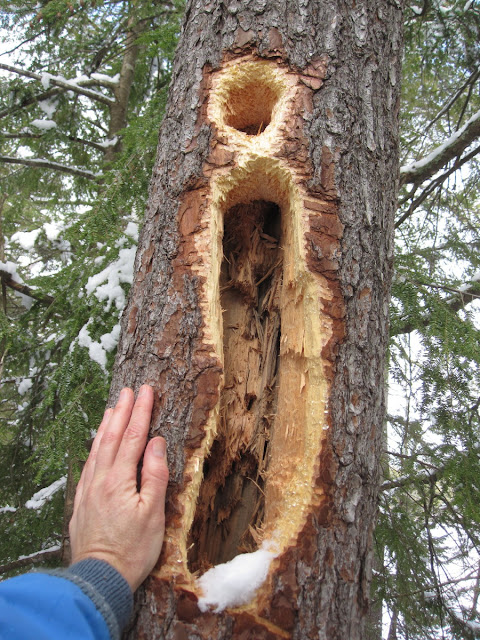 This looks like a nice future residence for some bird or rodent.  And speaking of rodents, it sure was strange to see the chipmunks struggling to get through a foot of new soft snow.  They probably aren't enjoying the change back to winter any more than many humans, but at least we can appreciate the restored winter splendor. 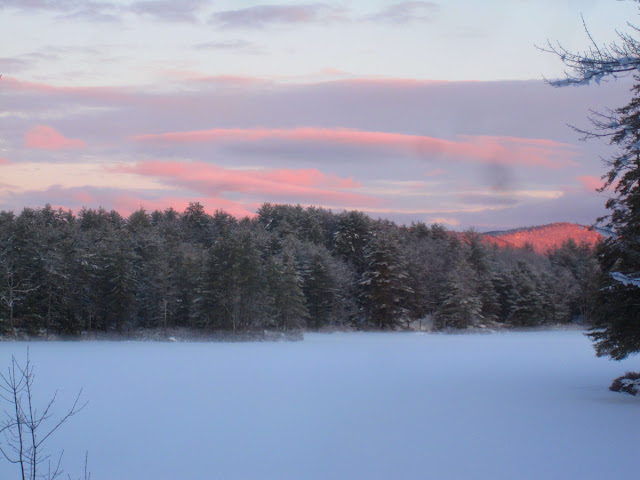 Posted by Scott Powell at 11:29 AM No comments:

Meteorological spring arrived on March first and brought with it spring weather and other early signs of the coming season.  The chipmunks are out and running around on top of the snow looking for food and chasing one another to defend their territory. 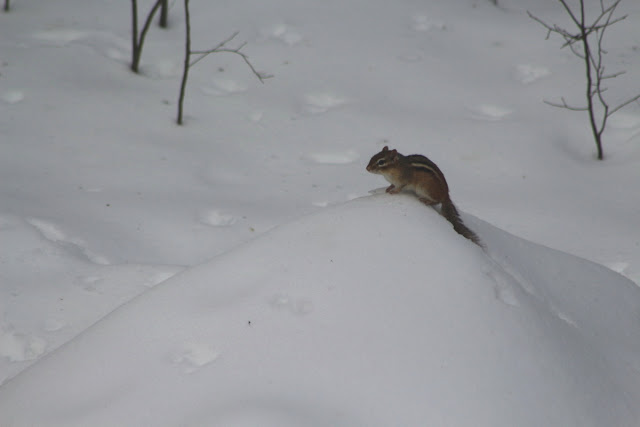 Gray squirrels are out all winter but their food supplies must be shrinking as they are spending more time under, around, and on the feeders.  Sometimes they'll hang upside down to eat. 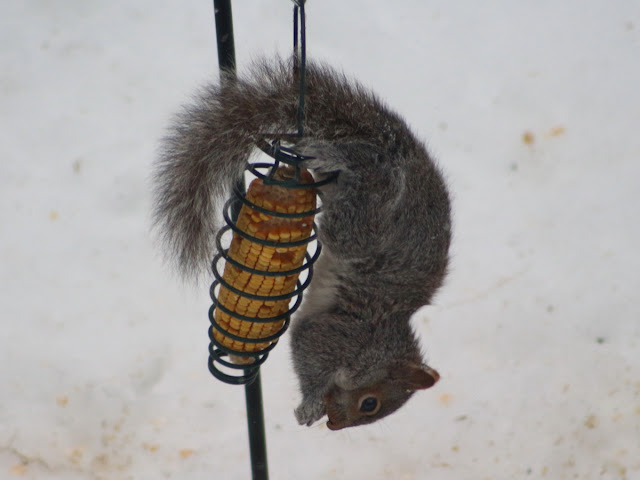 Other times they'll take a seed up to the top in their teeth and put on a safety belt while they dine. 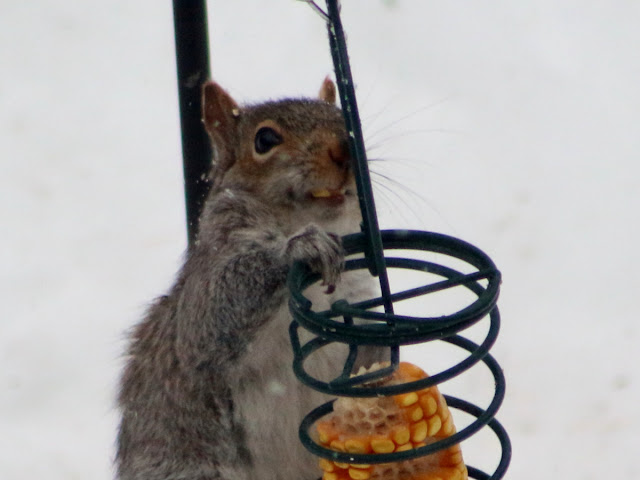 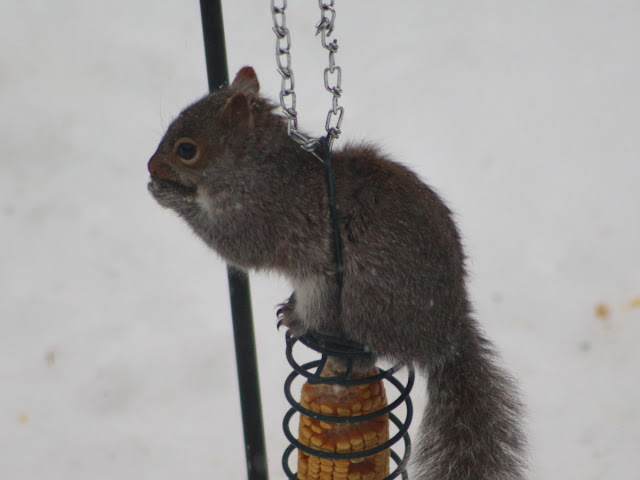 One morning after a slight dusting of snow there was a set of weasel tracks passing right through a major squirrel hang-out spot.

I've had two reports of bear-sightings already, so the bird feeders are about to disappear for the season even though I haven't seen any bear signs around Lake Wicwas.  Earlier in the winter I saw this example of just how committed bears are to getting to something that smells like food. 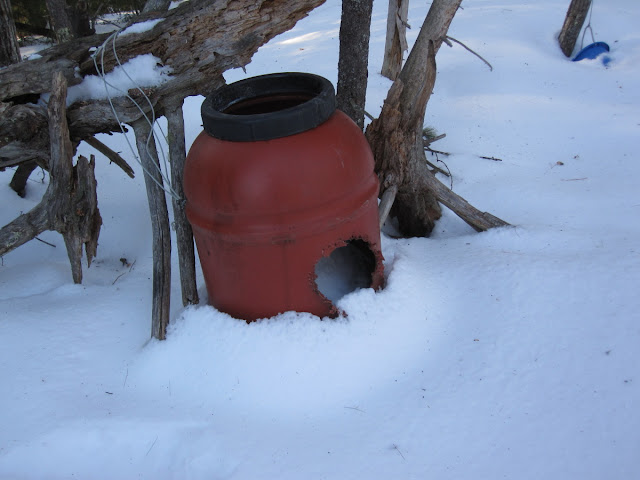 This deer feeding is station made of strong, hard plastic, but Mr. Bear had no problem tearing a hole through it to sample the contents once he couldn't get in through the top.

Roads around the Lakes Region have already been posted which is a good indicator that the sap is flowing.  Sure enough, the row of sugar maples beside Lakeland School has been tapped.

Before the rain this weekend there was enough snow to allow snowshoeing and we enjoyed a beautiful trek with longtime friends up to the White Mountain Ledge in the Hamlin Conservation Area. 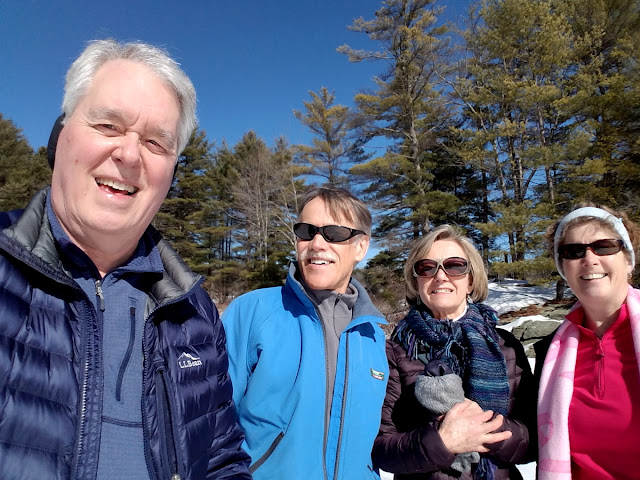 One of the highlights of the trip was hearing two Barred Owls caterwauling with each other in the middle of the afternoon - probably a pair, as barred owls are just entering their mating season which runs through April. But it could have been two males, each trying to outdo the other with the quality of their haunting baritone voice.

Let's hope there are a few more opportunities for winter activities in the cards.  It would be nice to reschedule the snowshoe tour that was cancelled yesterday due to poor ice conditions; by Saturday there were gaping holes around the shoreline and large pools of water collecting on the surface of the ice. 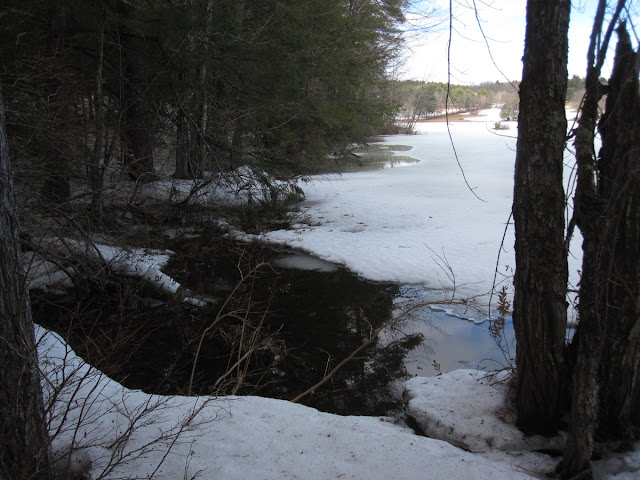 Want even more encouraging signs of spring?  In the warmest locations there are even a few shoots of new green life pushing up through the soil.
But don't unpack those swimsuits yet - there is still over 20 inches of ice out in the middle of the lake! 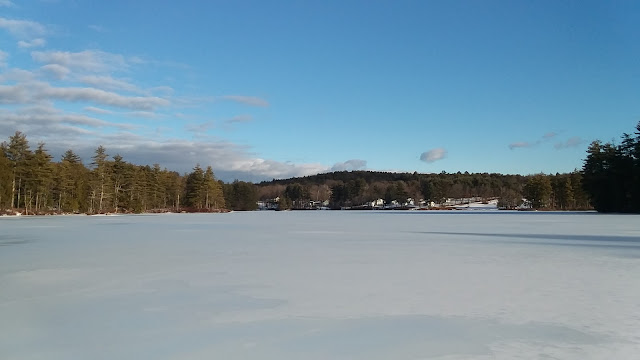 Posted by Scott Powell at 1:13 PM No comments: