It had been so long, I didn't realize how much I missed the sight of light and sky reflecting off rippling water.

It really was a long winter.  As much as I love winter and its incredible beauty, it is always reassuring and uplifting for the spirit to see the ice melt away and the fluidity of summer return.  Not that it's really time for summer just yet, of course.  This week was pretty cool and November-like, and there are still pockets of ice clinging on until the bitter end in the most secluded corners of the lake.

With the ice retreating ever farther north from New England's lakes, most of the migratory birds have moved on - there were few to be seen this week.  (Lake Winnipesaukee freed itself of ice on April 24.)  But more of the Lakes Region's resident birds are returning.  This morning I watched a male Wood Duck make two reconnaissance passes over the lake before skimming down onto the lake in the same cove it has nested with its mate for the past two years.  It took up its decoy position out in the lake, attracting attention from its mate which should be building a well-hidden nest in the woods.
And there are other signs of summer coming - I noticed buds bursting in the Red Maples as I took the picture of the Wood Duck.

Also this week, I saw a pair of loons on the lake;  I can only assume they are our nesting pair, returning to reclaim their territory for another summer in the peaceful, bountiful waters of New Hampshire. 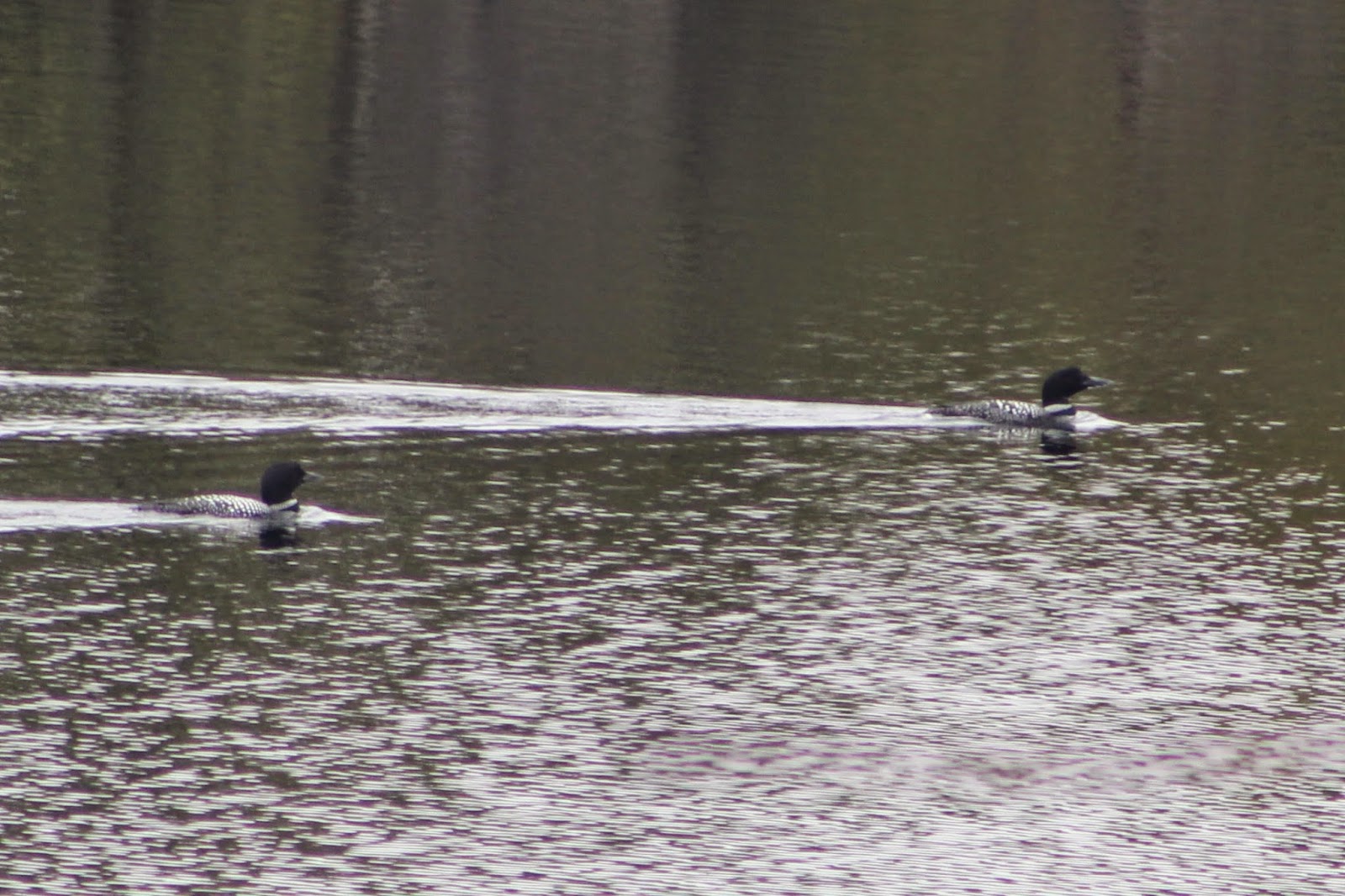 Perhaps they will have another successful nesting in 2015.

The trails in the area are starting to dry out enough to hike on - it's a great time to be out before the biting insects arrive to detract from the experience.  On a run through a hemlock/oak thicket I spooked a turkey that was scratching in the leaf debris for seeds and acorns.  It was startled enough to not just walk into the woods and disappear as is usual;  it was spooked sufficiently to take flight!  It is quite a sight to see a bird that large - a male can weigh 18 to 24 pounds - lift off and fly up a good 30 feet into a tree, with leaves flying in every direction from the force of the air pushed down by its wings.  No picture of this sudden event, but here's a photo from a few years ago that shows just how large these birds are.

It's hard to believe something that large can get airborne so quickly.

Here's where it was digging in the trail;  if you see signs like this in the woods, you'll know turkey are near by.

I want to give a special thank you to Dave Kutcher and DAK Financial for sponsoring and organizing Clean Up Meredith 2015.  A dedicated group of volunteers fanned out over Meredith to pick up trash from our roadsides.  The team I was on cleaned up Meredith Center Rd from route 104 to Collins Brook Rd, Chemung Rd from Meredith Center to Swain Road, and Dow Rd. (Thank you JG, TM, DM, and LP!)

Thousands of people living and passing through the town of Meredith will appreciate their efforts.

The lakes region is a special place that deserves to be well cared for.


(Scroll down if you missed my post last Monday on ice-out in Wicwas.)
Posted by Scott Powell at 8:45 PM No comments:

As predicted yesterday, ice-out on Lake Wicwas occurred this morning, April 20th.  At this time, Stress Free can make all of its ports of call, though it may have to make a small maneuver around one last finger of ice near the boat landing.

The past two weeks provided ideal conditions to melt away what had appeared to be an impenetrable layer of ice just two weeks ago  - almost two feet thick.  But sunny days and temperatures in the 60s worked their magic.  Here is a sequence of pictures showing the process over the past two weeks in one area of the lake.

Posted by Scott Powell at 5:32 PM No comments:

The ice has been creeping out of Lake Wicwas slowly and steadily - yesterday's wind really helped move things along.  I think by tomorrow morning I will be able to declare ice-out, but we'll have to wait until dawn to know.  Here's how things looked from the boat landing this evening at 4:15pm.

Right in sync with the ice leaving, many animals are emerging and returning to the lake.  Today I heard the wonderful sound of a hundred Wood Frogs singing in a vernal pool, calling to their mate as spring brings thoughts of love.

I also saw my first amphibian of the year, a tiny leopard frog in a wet spot right beside the lake, having just emerged from the mud down below the frost line.  And there are lots of birds on the lake now, both permanent summer residents such as the black ducks, as well as the transients on their way farther north - Mergansers and Buffleheads.  Some of these arrived when there were only small gaps in the ice, plowing through the ice and slush like a maritime ice-breaking ship. 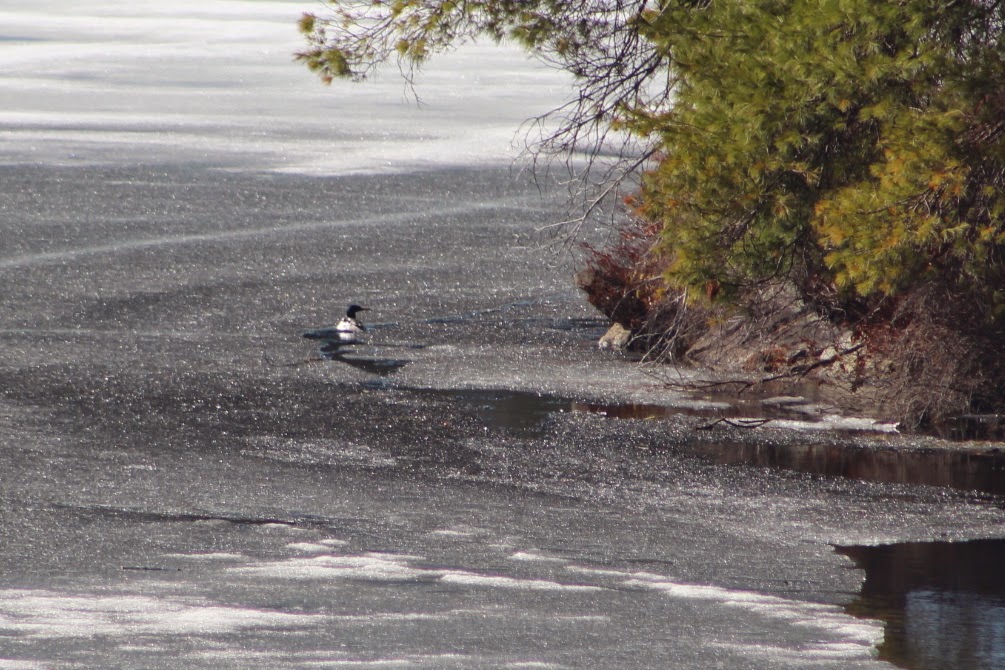 This pair of Common Mergansers found enough open water to get their dinner before grooming - and resting - on a nice, warm, comfy patch of ice. 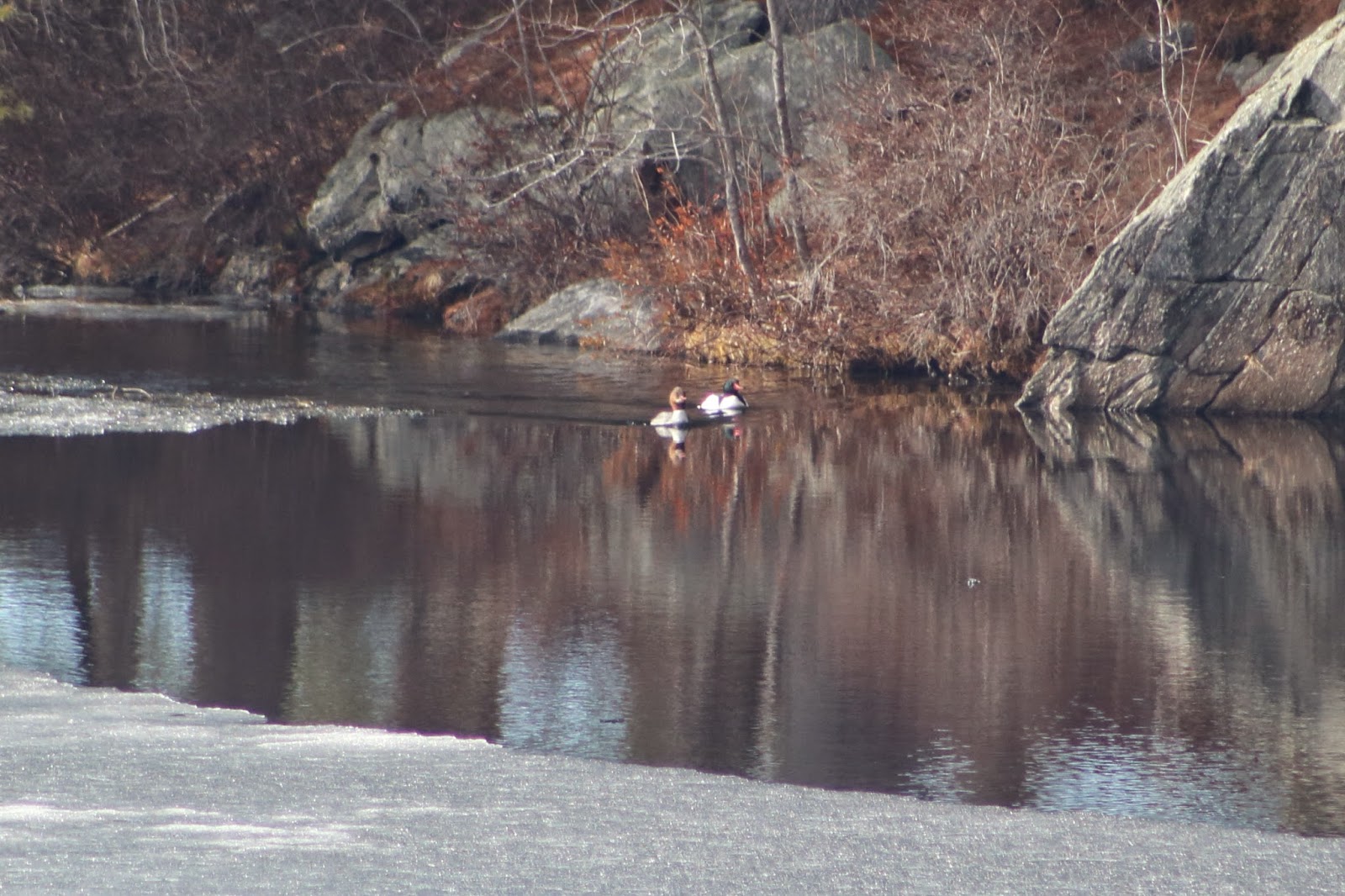 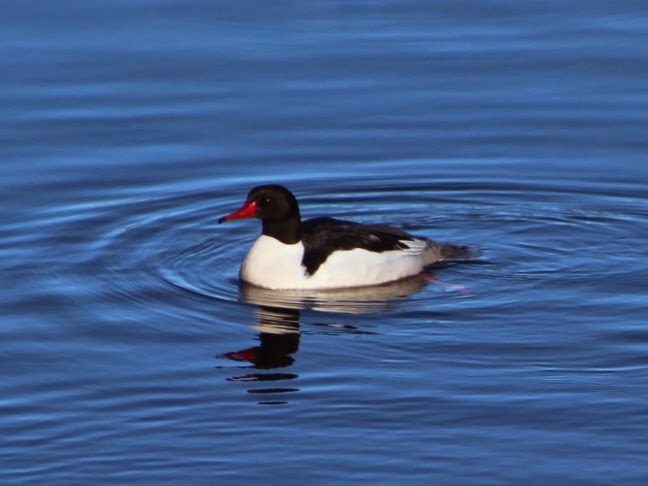 The next day a female Hooded Merganser came swimming by - no sign of a mate for her yet.
And I saw my first loon on the lake just today - only one;  I don't know if it is half of our nesting pair or not.

Various mammals are out and about more as well.  The first beaver of the year swam by as soon as there was a significant gap around the edge of the lake, and the next day a muskrat cruised by.  I wonder if it was the muskrat that enjoyed snacking on all these clams.

I saw deer tracks in the mud, and caught a Gray Fox and a Raccoon out prowling for food.  The raccoon could also have been the consumer of the clams - they are excellent swimmers and love all types of seafood.

Raccoons are also pretty vicious - if these two met up, it might be a good fight.  But with all the food sources around (raccoons like wood frogs too) at this time of year they would probably leave each other alone and go after the easy pickin's.

Here's another sign that summer is coming - buds are swelling and turning red, here on blueberry bushes. 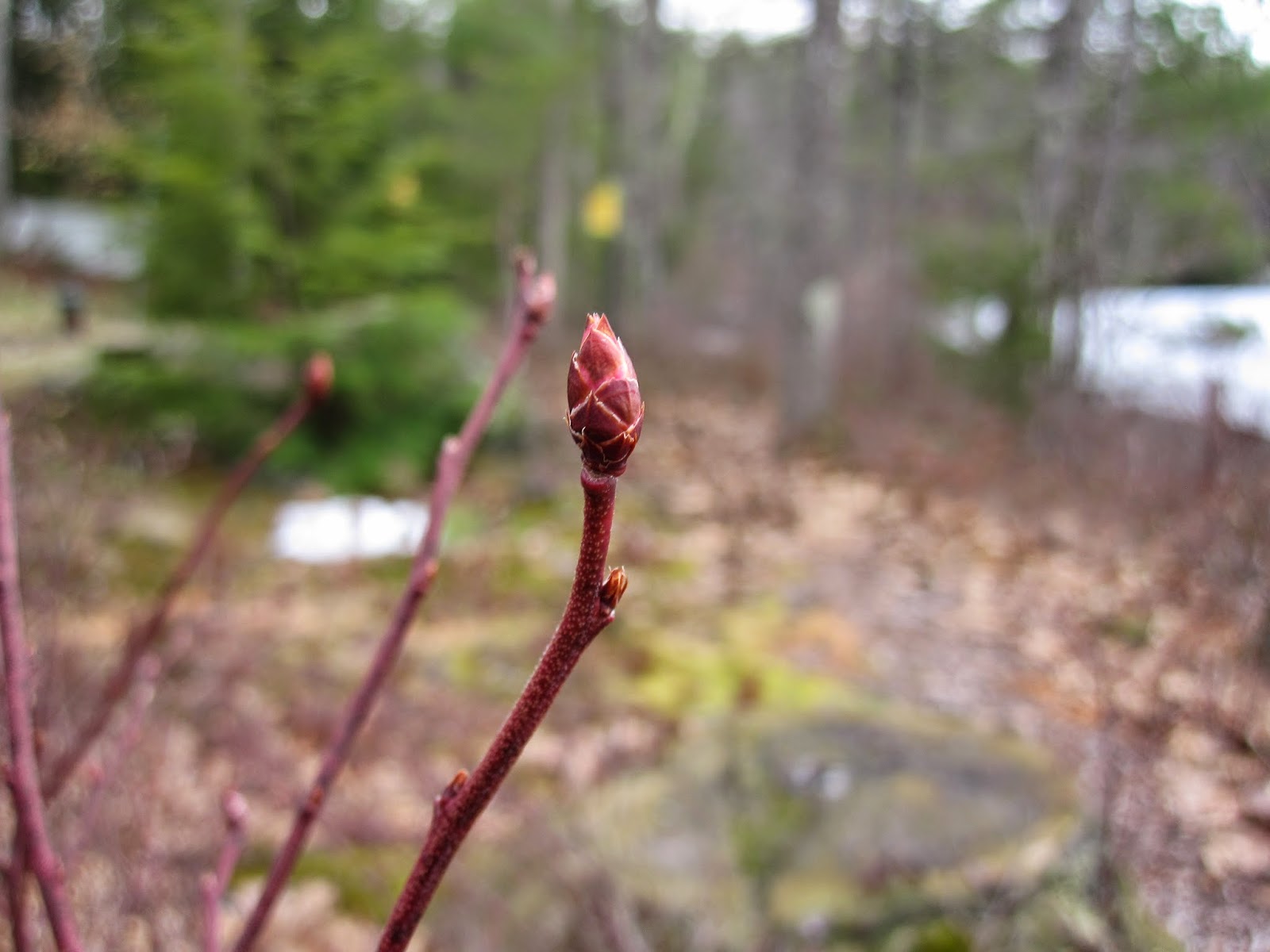 The winter of 2015 is finally setting on Lake Wicwas. 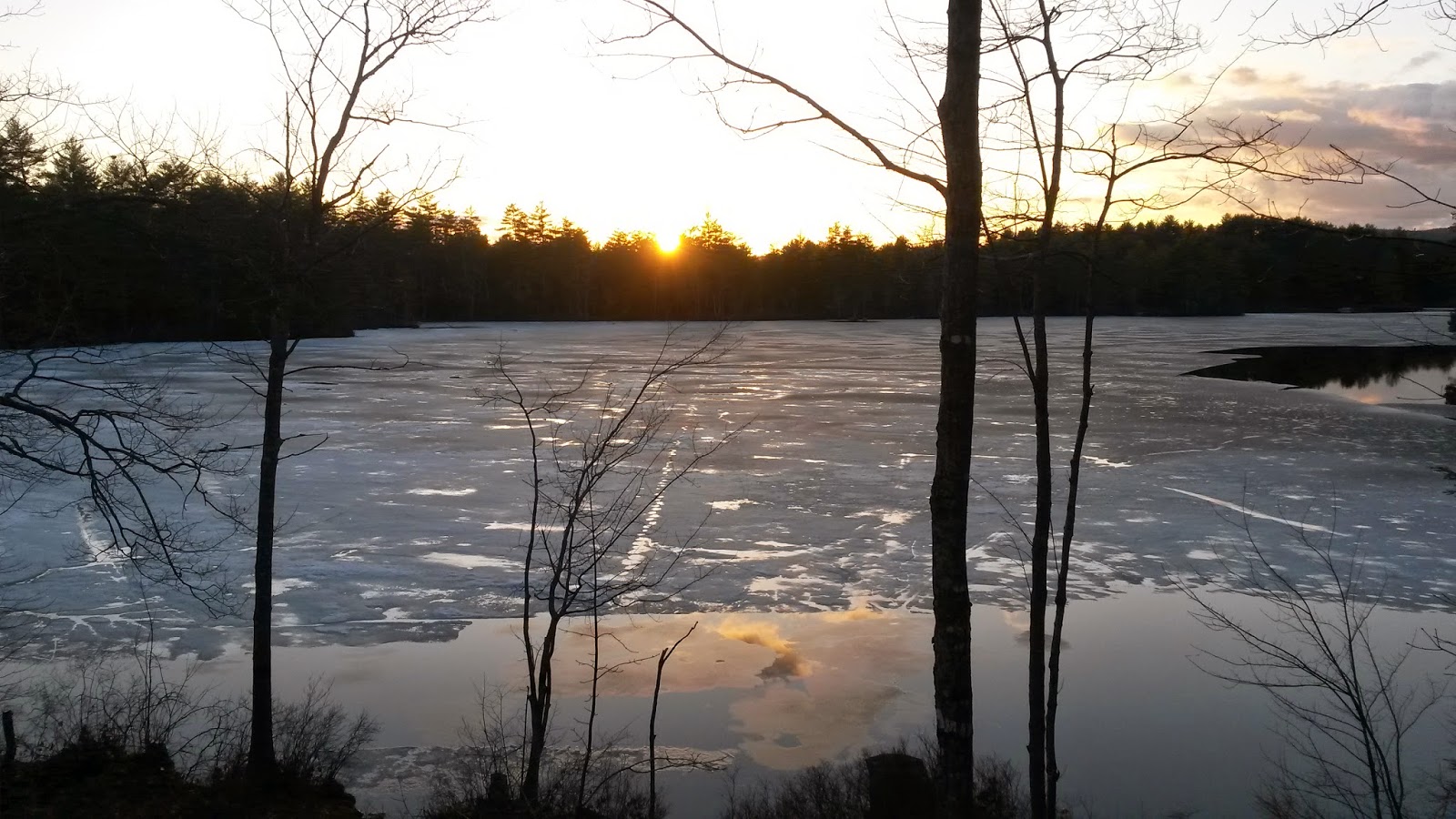 Posted by Scott Powell at 9:01 PM No comments:

Maple sugar season is nearing the end in the lakes region.  Both sugar houses around Lake Wicwas have been processing the delectable treat the past couple of weeks.

We stopped by the Chemung Gang Sugar Shack (just up Chemung Road from Meredith Center Road) to get some local syrup, and Bill Taggett gave us an overview of their operation. 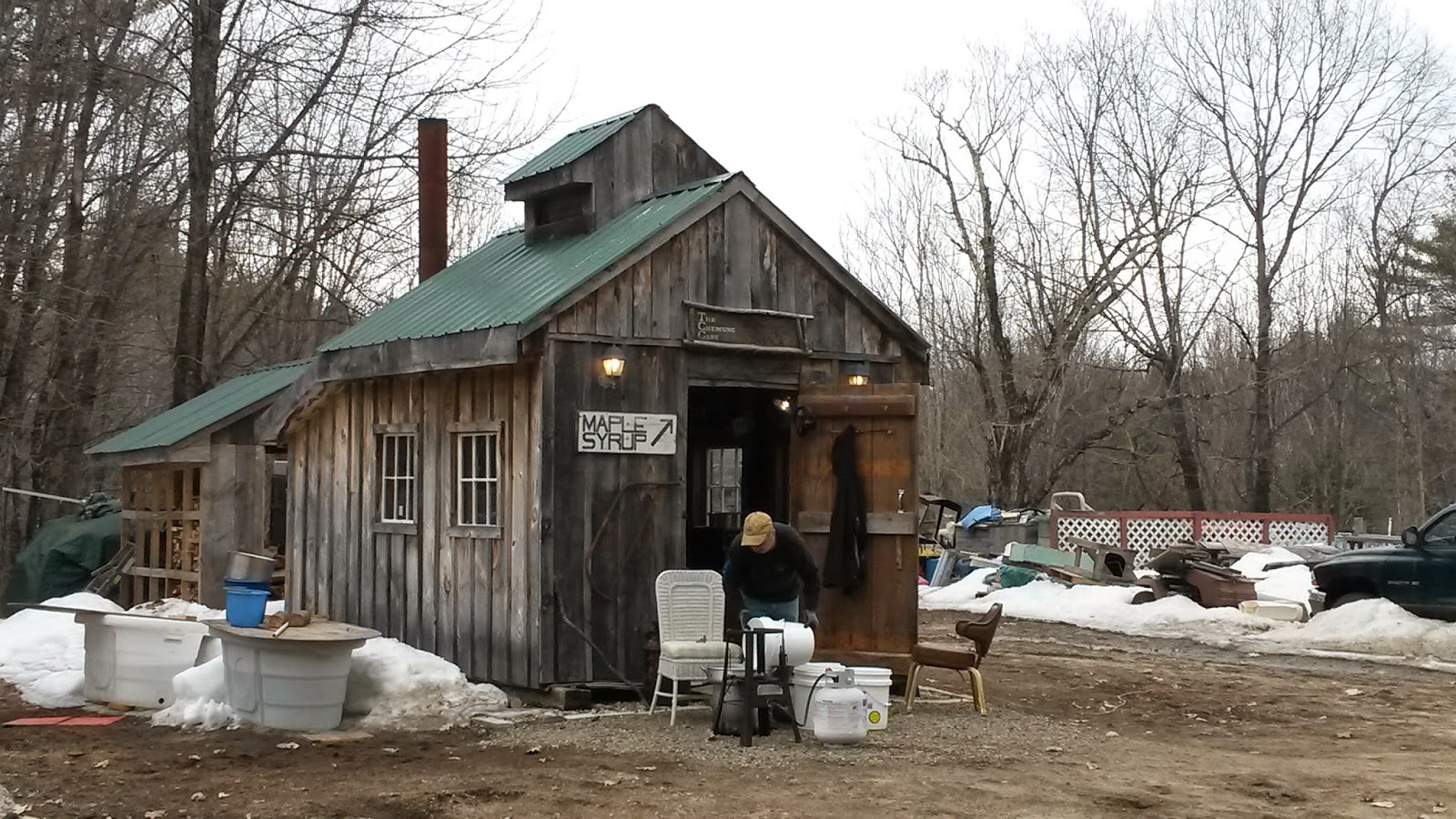 Bill said it is a less-than-average year for sap production, but they will have some for sale.  If you want to have maple syrup with local Lake Wicwas flavor on your blueberry pancakes this summer, you'd better stop by one of these operations soon!

As if the arriving waterfowl weren't struggling enough with the lack of progress on the melting ice, we received some snow this week to fill in the few openings that had formed.

Last week I found a Heron fishing in one of those tiny openings in the lake;  this week I noticed this pair of ducks trying to eke out a living right beside the road where running water from a culvert under the road had carved out a small pool.

And beside the dam, where running water has created another opening, I saw my first pair of Canada Geese.  While we were watching them, another pair of geese came flying in to the same spot, and we got to observe some territorial defense in action.  As soon as they touched down, the two that had staked their claim to perhaps the largest open section of water on Lake Wicwas decided it was not big enough to share and went after the intruders immediately. 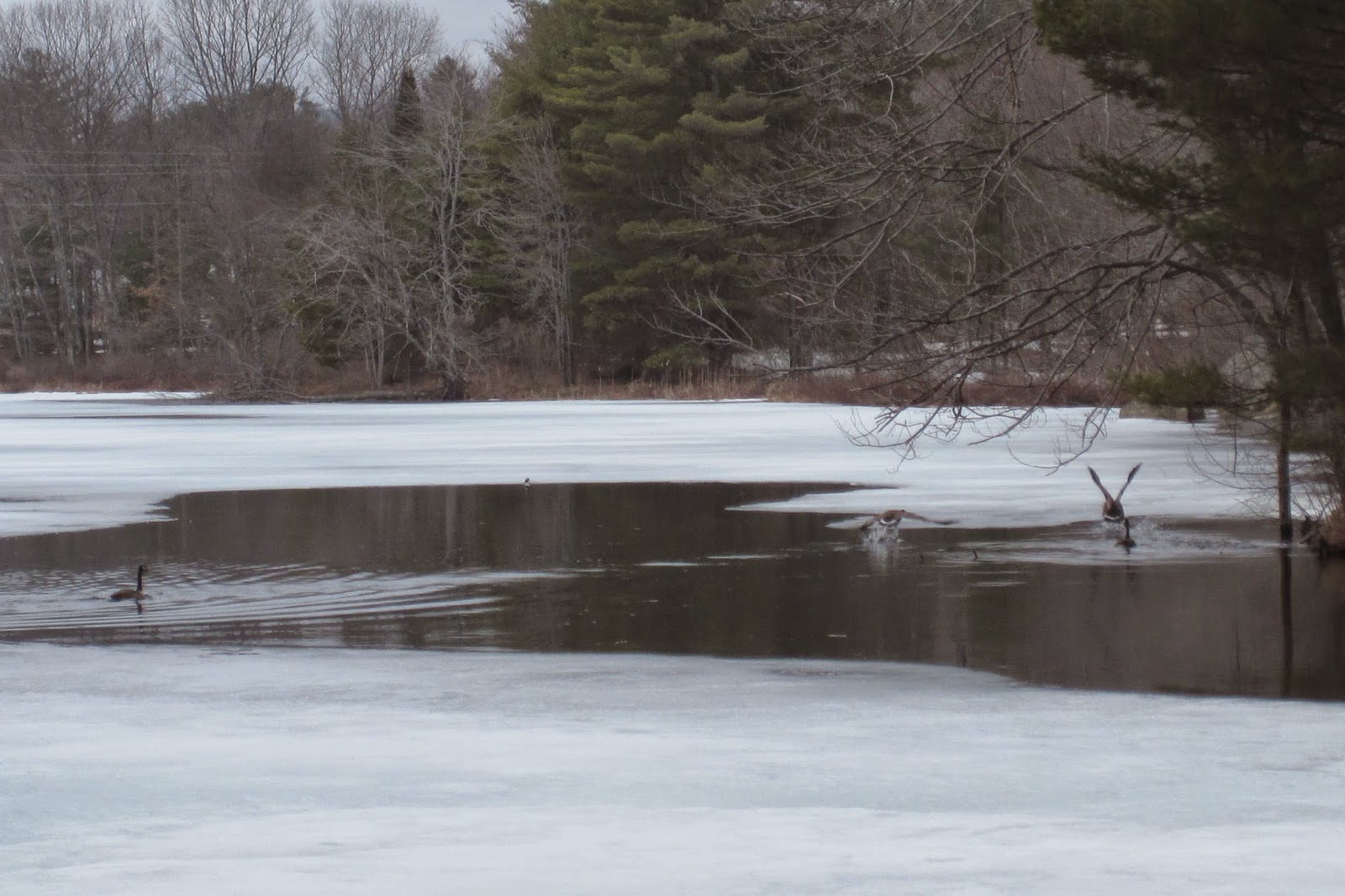 A loud standoff and aggressive posturing took place, with the established pair chasing the new-comers onto the ice.  That wasn't sufficient, so they took to the air in pursuit. 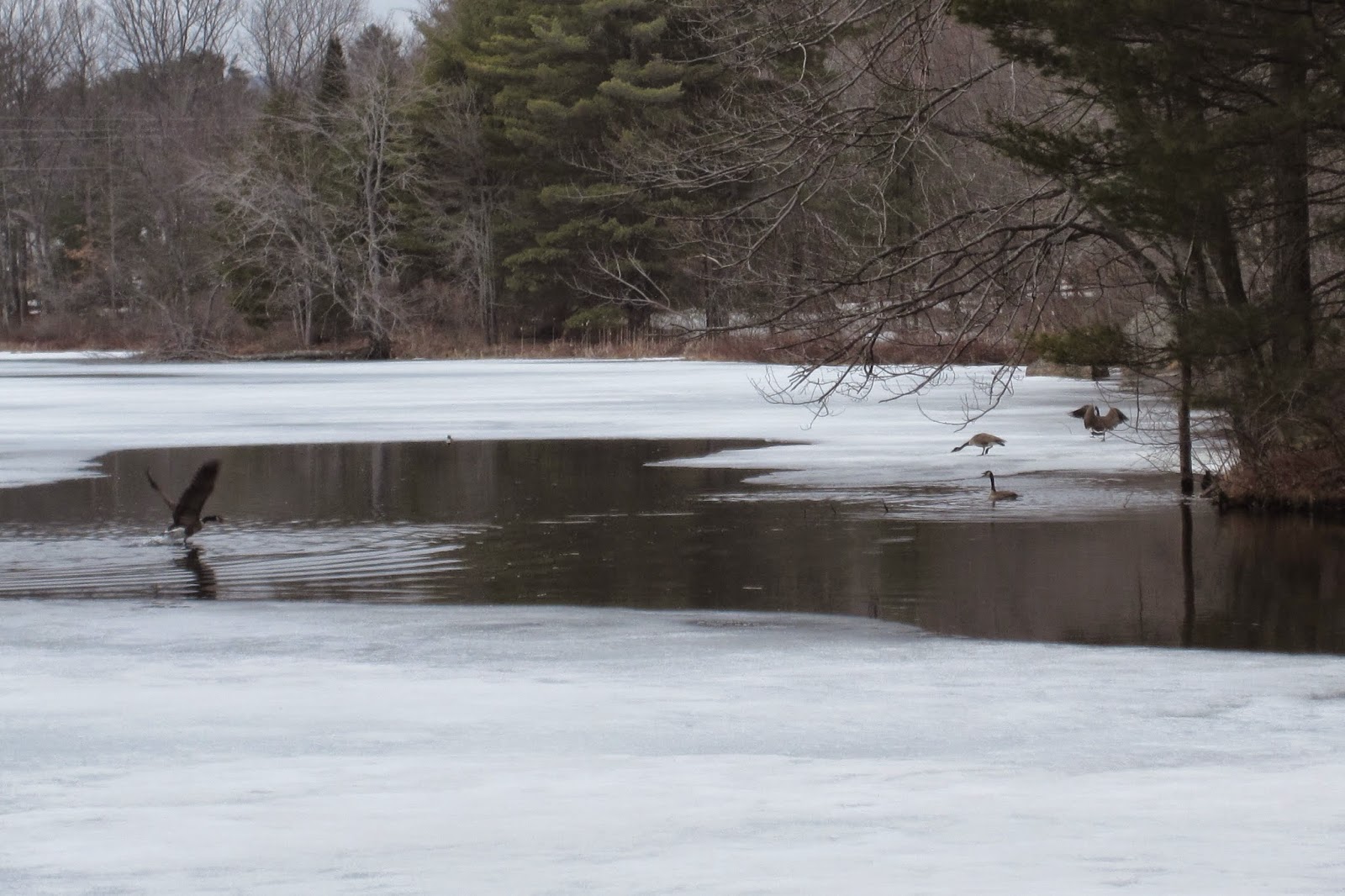 The unwanted guests flew off.

But they weren't ready to give up the fight;  they landed again just a bit a farther along the ice, so the residents went after them again. 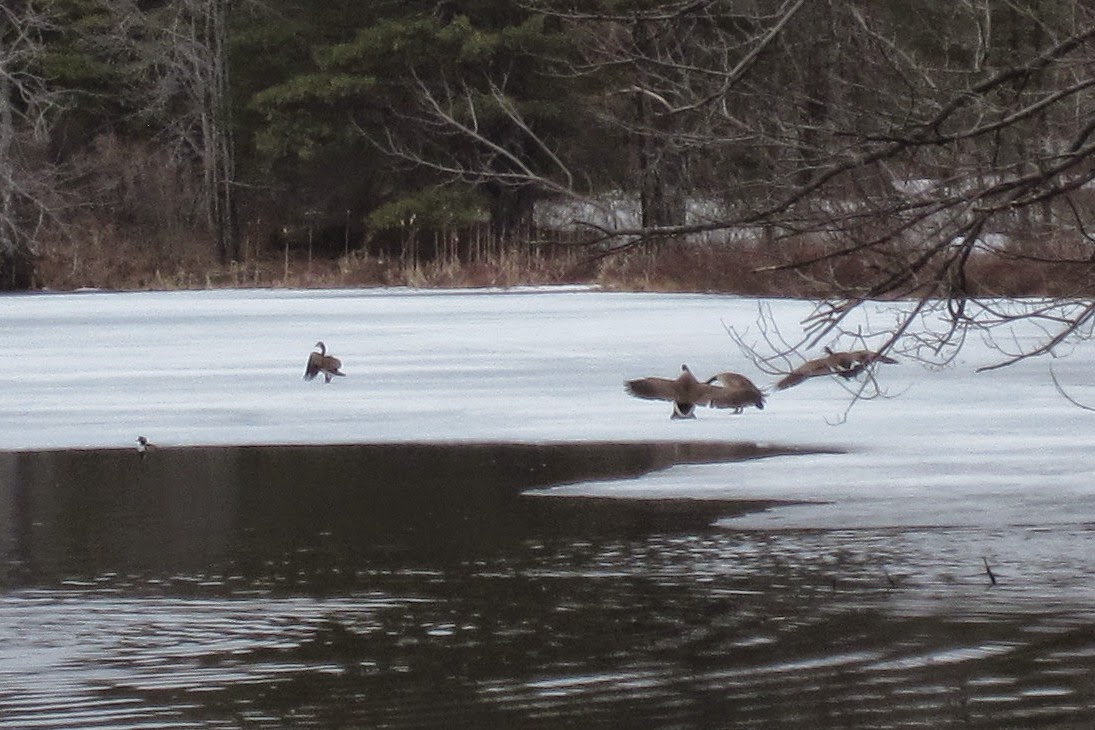 There were several up close and personal encounters. 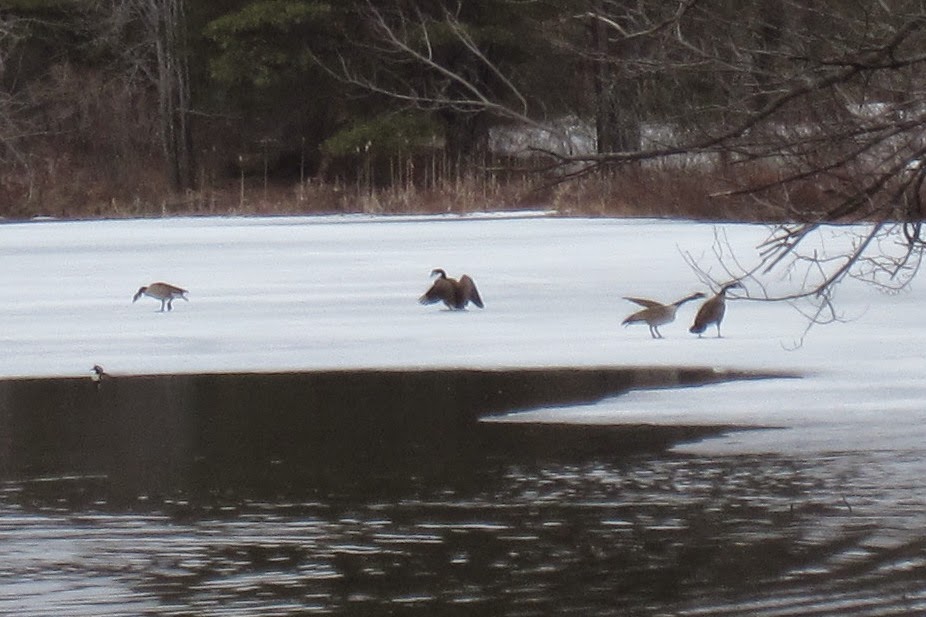 They continued to harass them, chasing them along the ice to make sure they got the point. 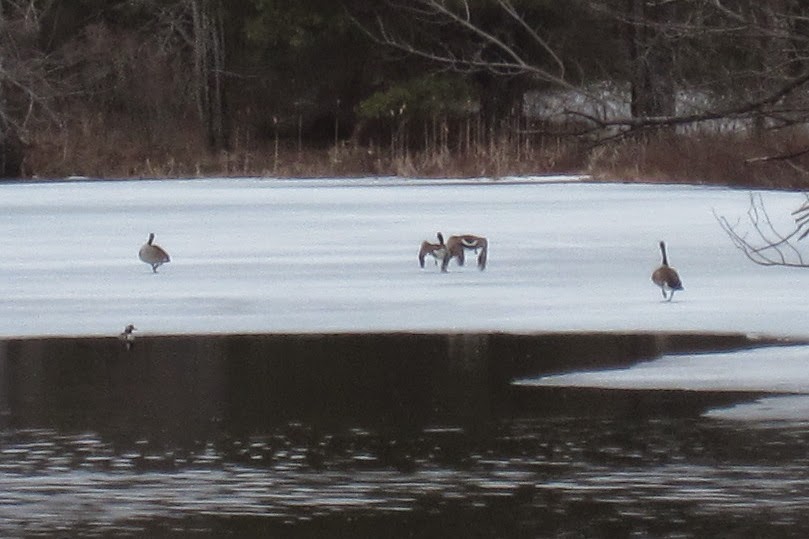 Did you notice the little Hooded Merganser just sitting at the edge of the ice watching all the antics? 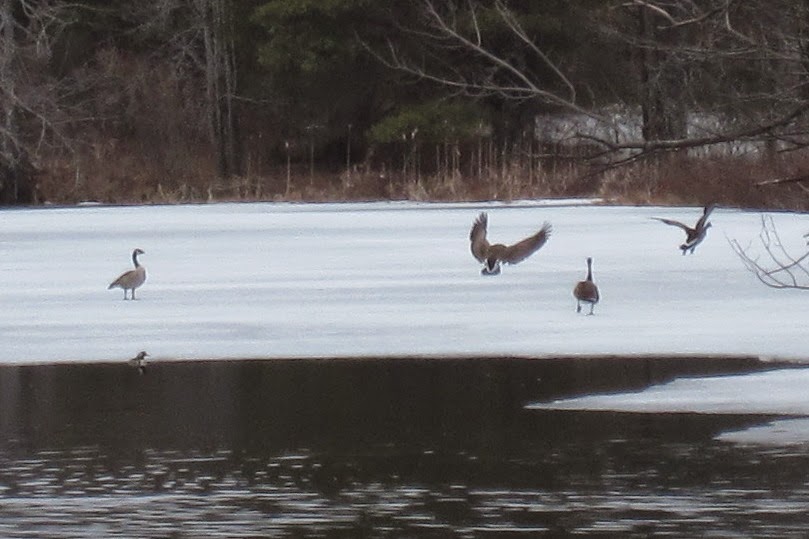 Eventually the initial residents reined supreme and successfully defended their homestead.  I put a video clip of the final chase across the ice on Youtube, as blogger doesn't upload video very well.

Warm weather today is helping open things up more now.  As the ice recedes there will eventually be enough lake to accommodate everyone.  The minute there is enough runway for loons to be able take flight off the water, I expect they will join the crowd now assembling for another summer on Lake Wicwas.

Posted by Scott Powell at 5:50 PM No comments:

Opening day of fishing season came and went this week - I wonder why I haven't seen any bass boats on Lake Wicwas yet....

Yesterday was my final excursion onto the lake.  Although there are still 21 inches of ice, including 6 inches of hard, black ice down there, the edges of the lake are getting soft, and it was a little dicey getting out to cut a hole. 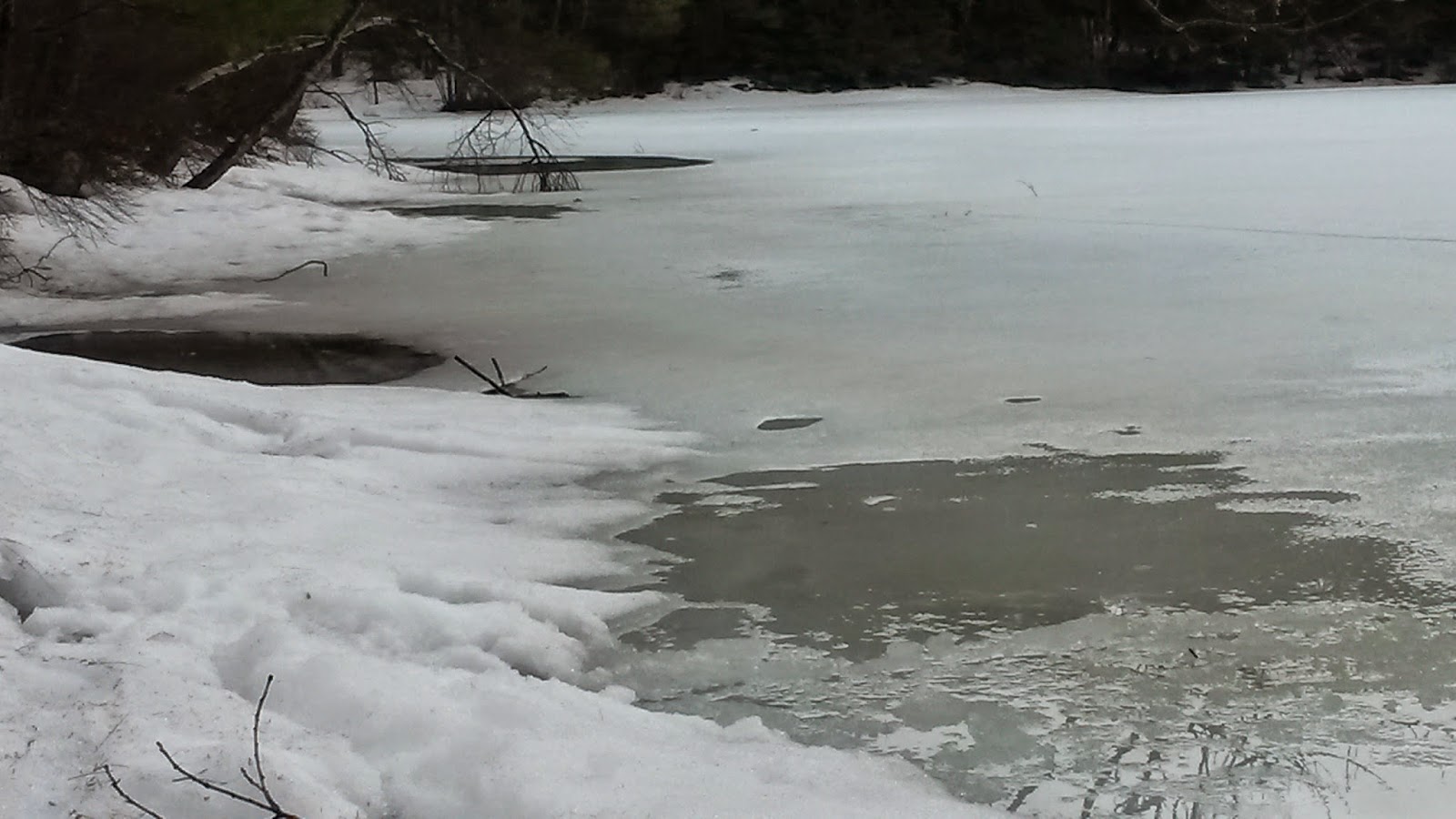 There are shaded areas where one can still get onto the ice from shore, but I think I'm done.  I did take one more ski trip around the lake on April first, and I wasn't alone (I'm guessing HC and TG left their mark out there).  The sun fashioned a smooth, soft, yet very fast surface for us.  With my first ski trip of the winter logged back on November 28th, we had a long season for XC skiing around Lake Wicwas.

On my trip I was surprised to see a Great Blue Heron.  I didn't get a picture, but it was fishing in a tiny open spot along a sunny, south-facing shoreline.

Heron stay in the region all year, but move to areas where the water stays open throughout the winter.  Other birds are returning to Lake Wicwas as well.  I saw a turkey vulture soaring over the lake, and have also heard Canada Geese;  I expect to see them out walking on the ice soon.  And there was a duck at the inlet from Dolloff Brook.

Here's a grim (and totally erroneous) calculation:  Over the past two weeks the lake has lost 4 inches of ice.  At this rate we'll have ice out on June 13th!    Not to worry, it won't take that long.  Look - signs of spring are already pushing up! 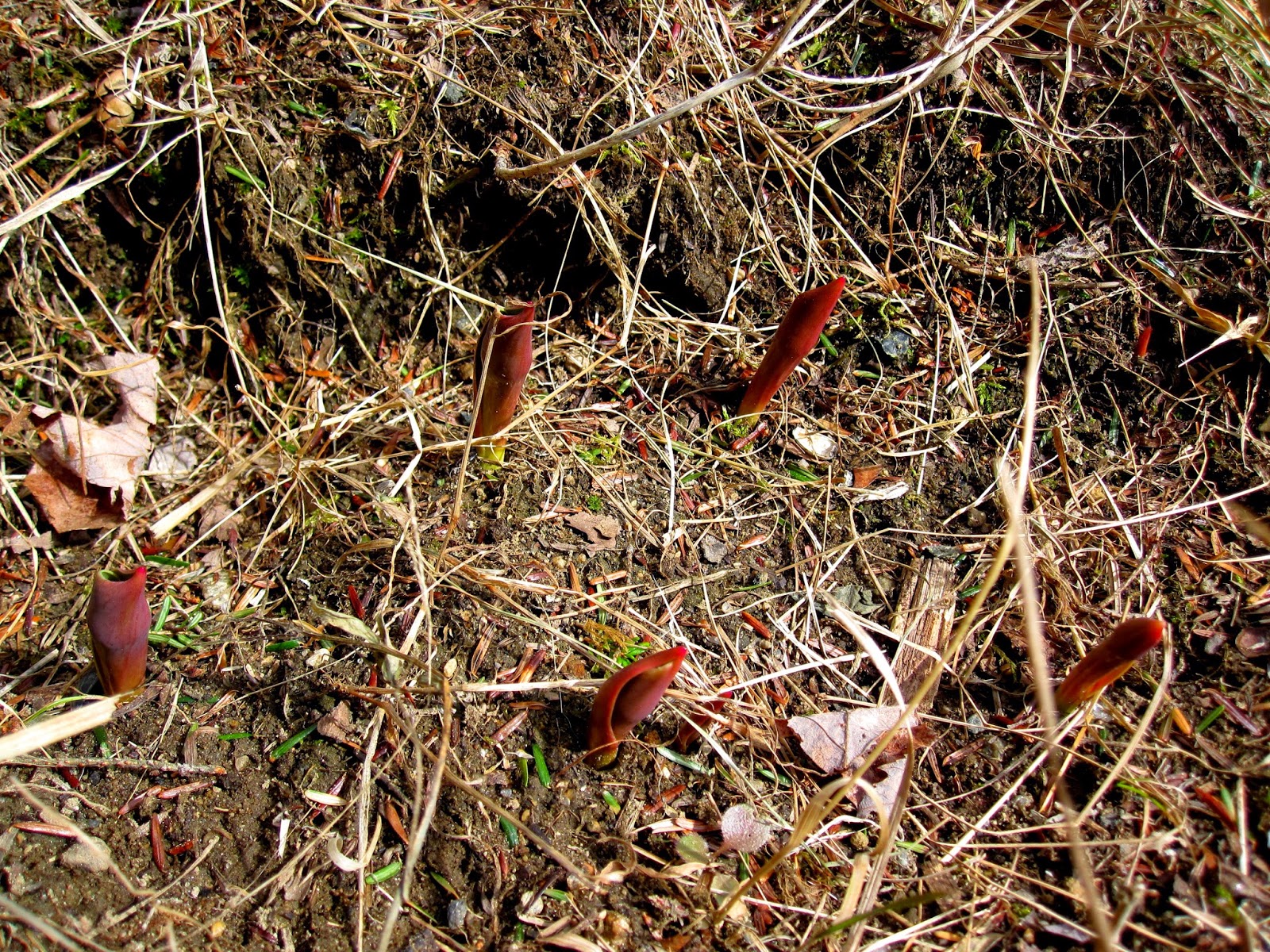 Posted by Scott Powell at 7:11 PM No comments: