Memorial Day brings a time to give thanks for all we have in this country;  it is so easy to forget the sacrifices so many have made for us.  This grave of two revolutionary war veterans is barely visible from Chemung Road, but is well maintained.

The hot weather this week set the stage for quiet early-morning paddles on Lake Wicwas.  On two occasions I watched Baltimore Orioles enjoying the fruits of spring on Sheep Island.


They were hopping from branch to branch, plucking off delectable, energy-rich insects from the pine trees.

This a synergistic service, removing damaging pests from trees while nourishing themselves, keeping nature in balance.  Orioles are known predators of tent caterpillars, and this seems to be big year for those unsightly insects.
They look like easy prey once they get out of the tent.

Tent caterpillars may completely defoliate a tree, but unless it is otherwise stressed, the tree will usually sprout new leaves and survive.  I've seen a scarlet tanager frequent the vernal pool where this nest is located.  Many other animals feed on these caterpillars as well, as unlike the non-indigenous gypsy moth, tent caterpillars are native to New England.  A Michigan study by the Conservation Resource Alliance found that on average, one bear eats 25,000 caterpillars in a single day!   (They determined this by sifting through their scat - how's that for a job?)

If any nests are built over the lake, and a caterpillar should fall onto the water, these guys would be sure to gobble it up!  (This one's for you, GameFisher316!)


After depositing her eggs, the female bass will depart, possibly placing more eggs in another nest with another male;  this increases the odds of passing on her genes.  The male will stay at the nest to guard the eggs and protect the minnows when they hatch.  At least until he gets hungry - then he will likely eat plenty of his own young.  [Ref:  William K. Johnke, Dorbil Publishing Co, 1995]

If you were out around the lake this weekend you probably saw lots of flowers:  lilac, cherry, jack-in-the-pulpit, and everyone's favorite, lady's slippers. 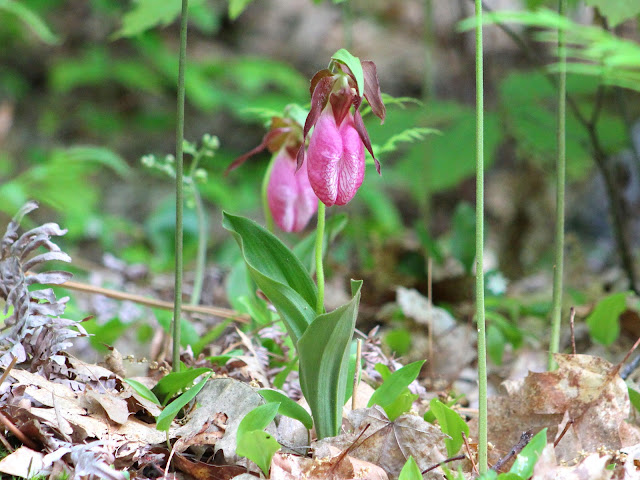 Now an update on the loons:  they still appear to be in search of the perfect nesting site, as the pair remains together, out fishing and doing home inspections.  Early Saturday morning one popped up near me to say good morning. 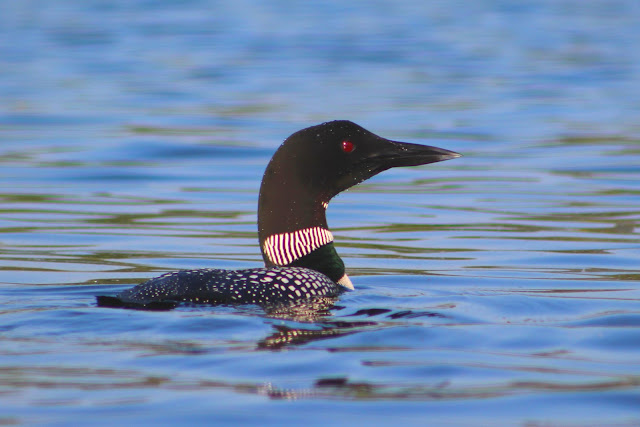 And there is good news and reason for optimism:  on Pleasant Lake, 30 miles southwest of Wicwas, the loons have re-nested after abandoning their first nest due to eagle harassment.

Finally, Meredith Center held a Memorial Day service at Oakland Cemetery today to once again remember, on this Memorial Day, all those that served and sacrificed to secure our safety and freedom. 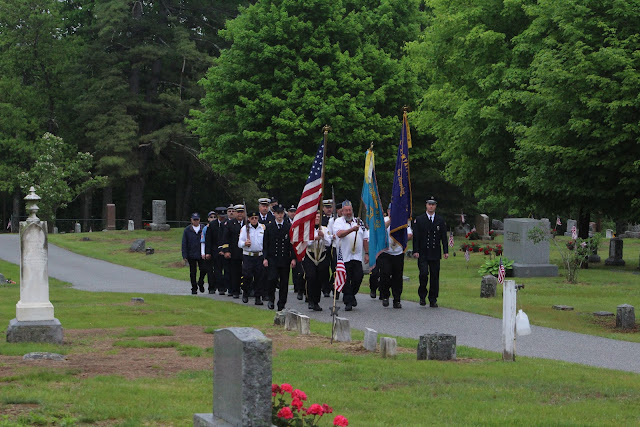 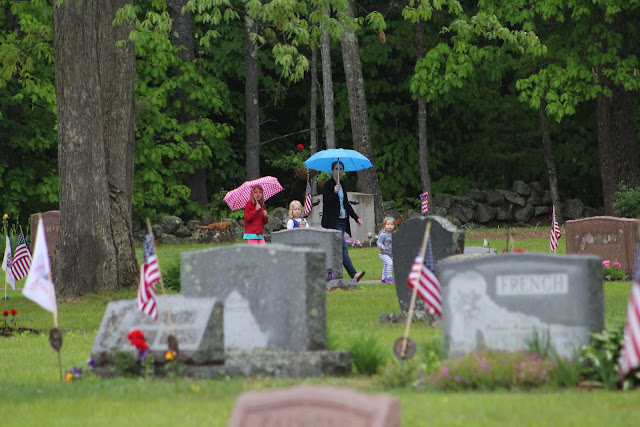 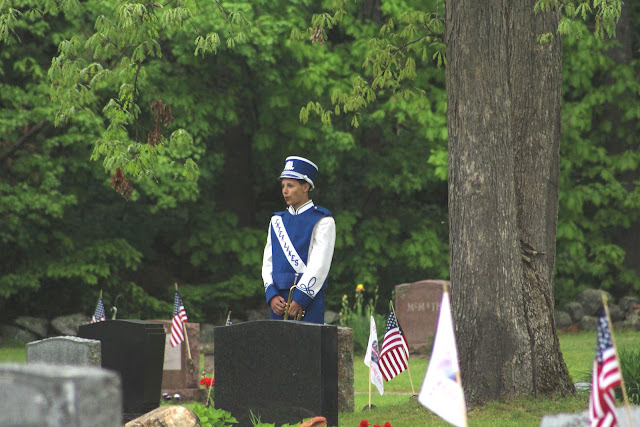 Thank you.  We remember.

Posted by Scott Powell at 9:37 AM No comments:

The first eggs of the season hatched at Lake Wicwas this week, those of the Canada Goose, which is appropriate since they are the first birds to arrive in the spring.  Earlier in the week there was a family of eight to ten Canada Geese crossing Route 104 just east of Cross Hatch Road, and yesterday a family of seven appeared on the lake. 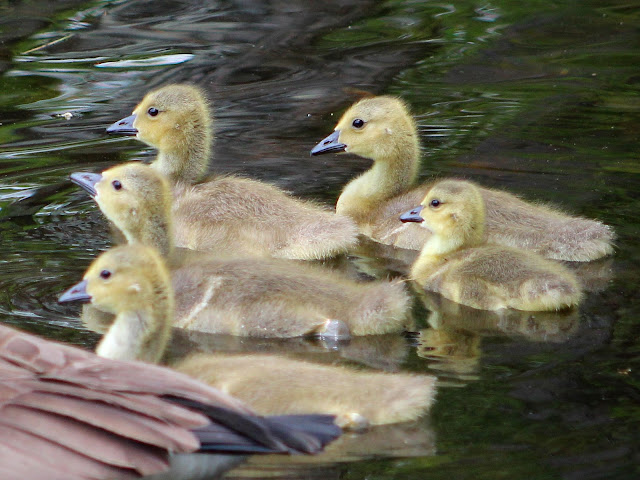 And even though there are more than enough Geese in these parts it was still sad to see that one egg didn't make it. 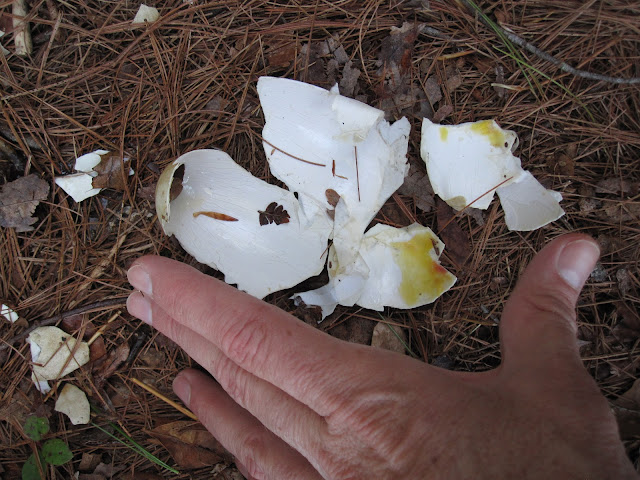 Finding this early one morning in the middle of a trail near the water makes me think a weasel was the lucky diner of fresh egg for breakfast.

Land owners around the lake have taken steps to help curtail the excessive goose population by letting shoreline vegetation grow up.  Shoreline growth discourages geese from coming on the land - they love grassy areas as every park and golf course knows.  Beaches are also an invitation to geese, particularly now with little goslings in tow which have trouble negotiating a dense shoreline.  A natural shoreline helps prevent geese as well as soil erosion and nitrogen and phosphorus runoff.  Geese have few predators, and even fewer near human development.  But as they are redirected back to nesting in their natural habitat they will be more exposed to predators and the population will be better managed.

Most of our seasonal birds have now returned for their summer at the lake.  Still no news on any loon nesting, but I have seen several of our warblers hopping around in the trees, plucking worms and bugs off the new leaves, building energy to lay their eggs. 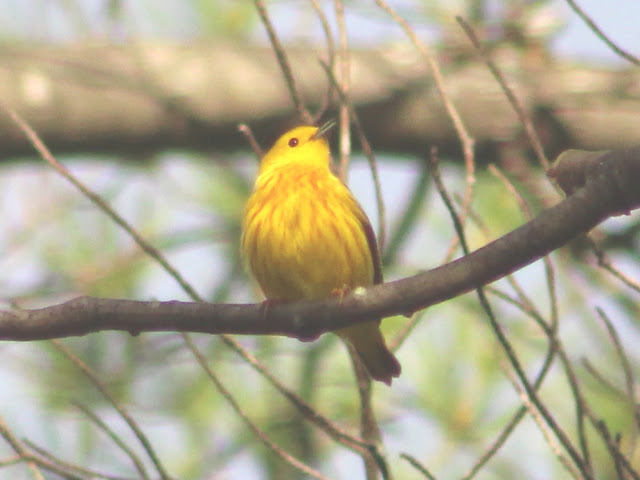 Birds aren't the only things returning for the summer - people are too!  Docks, rafts and boats are starting to appear around the lake.

I'm looking forward to seeing good friends again after many months away!

If you will be at the lake over the holiday weekend, be sure to take a short break from the spring time work to enjoy a walk in the woods;  there is plenty of beauty this time of year.


There are beautiful animals as well;  this week I was treated to my first deer sighting in some time.

As usual, it spotted me before I noticed it.  It started snorting and stomping as it stared me down.

After a minute or two of this it decided to bound behind a few small trees.

But it stopped there and continued to watch me, while another deer, invisible in the thicket, joined in the snorting. 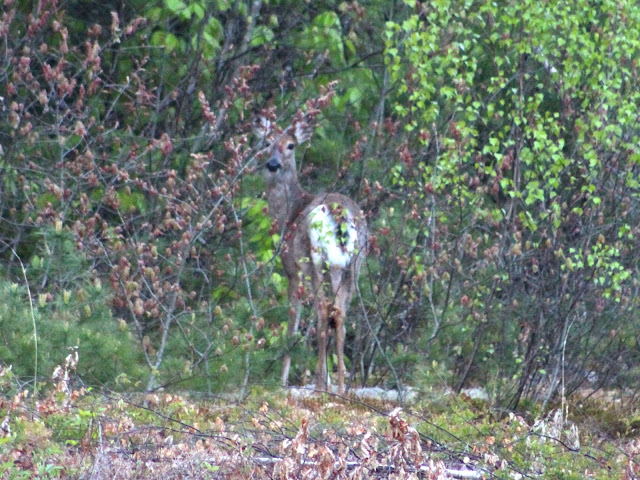 I went on my way, leaving them to enjoy the peaceful morning, savoring their breakfast at Bistro Wicwas - a table with a view.

Posted by Scott Powell at 5:59 PM No comments:

Our loons appear to be settling in and getting ready to nest;  I have seen them several times around the lake fishing quietly together and checking out potential nesting sites.

They are well behind the loons on Pleasant Lake which have already laid their eggs.  But they (on Pleasant Lake) have a distinct advantage:  they get to move into a pre-fabbed floating nest site, all set for them in a protected location and ready to go.  Our pair has to do it the old fashioned way.  They have to scout out a good  site, private and secluded, safe from predators, protected from waves, and on terra firma at a point that won't get flooded if the lake rises, yet is still close enough to plunge into the water at an instant's notice.  It is not an easy task.

They might also have to fend off competing loons.  As recently as this past Tuesday there were interluders still trespassing on our pair's territory.

Most every night there are loud, distressed calls echoing over the lake.  Hopefully they will soon be left alone so they can select a site and begin their four-week period of tending to their eggs.

Other signs of life are springing forth all around the lake, including the evolving color of the hills as the trees push out their pale green new leaves. 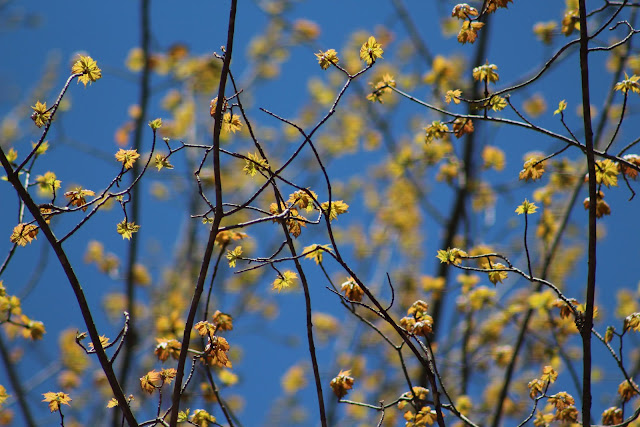 The Shadbush are blooming all around the lakes and mountains this week.

I knew Shadbush has an alternate name of Serviceberry, but I only recently learned the source of this name.  When someone passed away in winter in the days before machinery, they were placed in a receiving vault until the ground thawed enough for a grave to be dug.  In New England, the earth thaws out just about the time the Shadbush bloom, so these trees were nature's adornment at the services for those that passed away in the winter.  Thus, Serviceberry.

I much enjoy watching spring unfurl its beauty in the least expected places, such as a pile of dead oak and beech leaves.


I will end this entry with Friday's sunset and a quote from Henry David Thoreau.

It is an agreeable change to cross a lake,
after you have been shut up in the woods,
not only on account of the greater expanse of water,
but also of sky.
-    Thoreau 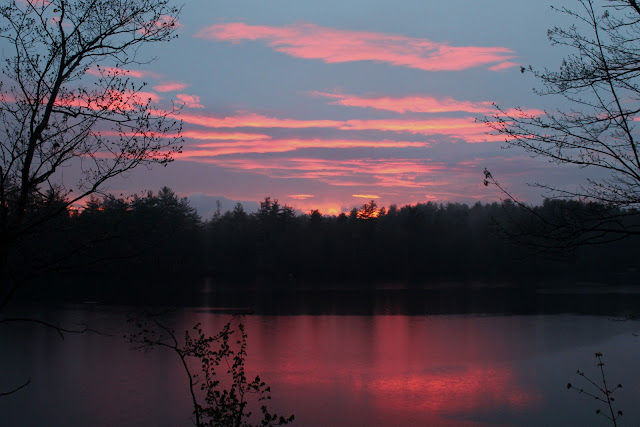 With the arrival of spring I hope you soon will be crossing a lake which you find agreeable.

Posted by Scott Powell at 8:02 PM No comments:

Happy Mother's Day!  We haven't made much progress toward spring this week as we've had cold and wet weather for days.  Even though the calendar says May, it has been a lot more "April Showers" than "brings May Flowers".  But everything is primed and ready to pop when we get that next warm stretch.

As the saying goes, it has been good weather for ducks, and there have been quite a few around.  Mallards are plentiful as always, but several pairs of wood ducks also appear to have taken Lake Wicwas as their choice to raise their families.

A pair of female mergansers that missed the dating party earlier this spring have been hanging around, looking for love. 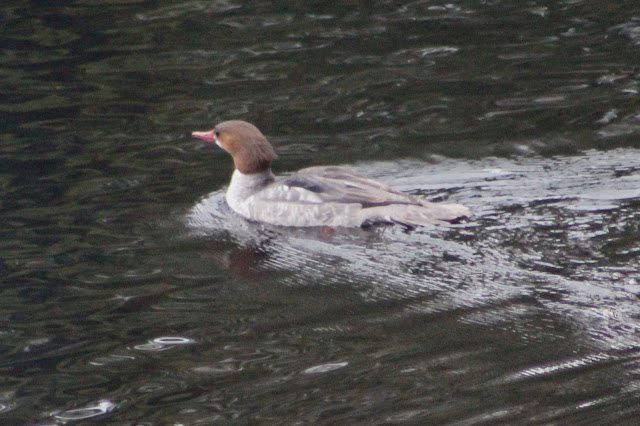 The cool weather has kept tic sightings down, but they are out there, tiny and difficult to see at this time of year.

Other, more helpful insects are appearing as well, including this cool little Common Water Strider.

It has enough mass to make dents in the water, yet it manages to stay dry, using the surface tension property of water to walk right on top of it.  The middle and rear legs have evolved to be very long and are covered with thousands of tiny hairs, the combination of which distributes its weight over a large area of water.  [Ref:  Ward, J.V. (1992). Aquatic Insect Ecology: 1. Biology and habitat. New York: Wiley & Sons.]  The short front legs are used to capture and puncture food which consists of spiders and insects that fall onto the lake.  [Ref:  Williams, D. & Feltmate, B. (1992). Aquatic insects. CAB International.]  They eat mostly live insects, but will consume dead ones as well.  So we can consider these beneficial insects, keeping down the insect population, as well as scouring up refuse that collects on the surface of the lake.  It's nature's miniature version of Mr. Trash Wheel.  (An innovative, automated solar-powered trash collector that can extract 50,000 pounds of trash a day from Baltimore Harbor - worth checking out if you haven't seen it.  Click on Mr. Trash Wheel above, or here.)

More of the summer birds are arriving every day to do their part in controlling the insect population.  The yellow-rumped warbler is one of the most abundant of the warblers, but will soon be near impossible to see, hiding high in the canopy of the trees.

After hearing the loons for quite some time, I had my first sighting. 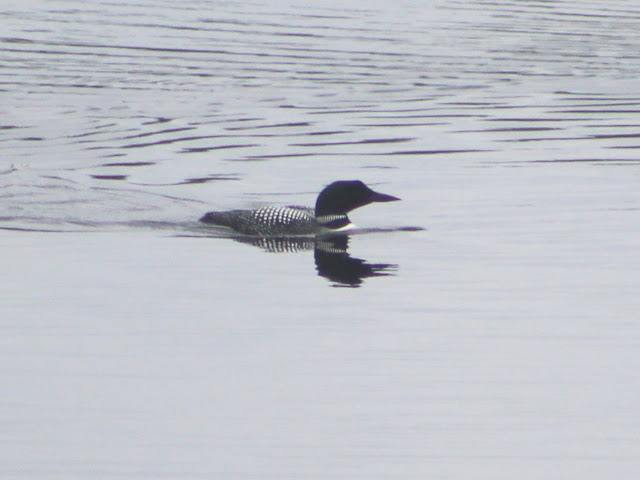 There were two loons, acting like a pair, but a third was in the mix as well.  I haven't seen any leg bands so I don't know if these are our loons, transients, or perhaps hopeful residents-to-be. 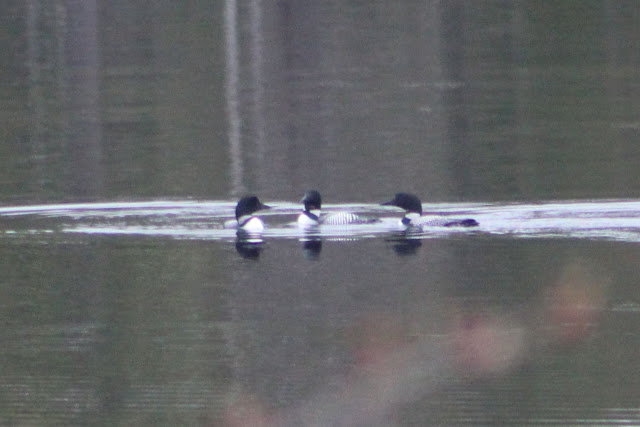 After last year's sad story with the loons (see post from October 18), I hope our pair didn't decide to move on to a different neighborhood.
Posted by Scott Powell at 5:00 PM No comments:

Members of the Meredith Conservation Commission worked in the Hamlin Conservation Area today building water bars on the Yellow Trail.

First the perfect specimen of tree is selected and felled:


Then using a bark spud, the bark is stripped by hand.


The trench is dug and the bar carefully placed and anchored. 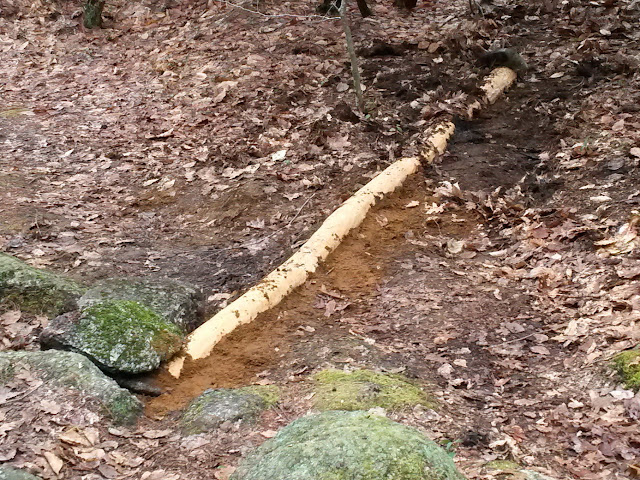 A good day's work in the woods. 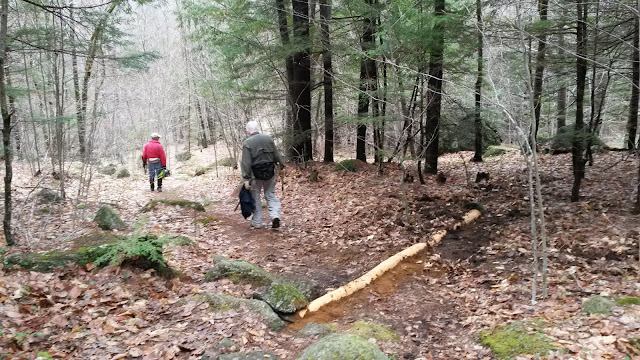 Posted by Scott Powell at 7:09 PM No comments: