We are back from Colorado, but I'm afraid I didn't make it up to Lake Wicwas, so I can't report on the current state of winter.  By all accounts, old man winter is not ready to give up his hold yet.  Since we left there has been more snow, and the radar this morning indicates sleet, freezing rain, and other wintery weather is in our future.

One of our local nature observers did send me this picture of a bone that was uncovered during a recent show shoe venture on the hills west of Lake Wicwas.  Their trusty canine found it buried in the snow and was kind enough to retrieve it and offer it as a gift.  Their research indicates it may be from a deer, but if anyone has any insight, we'd love to hear it.

Think spring!  It's time for at least some nice spring skiing!
Posted by Scott Powell at 6:16 AM No comments:

I wasn't at Lake Wicwas this weekend, but was certainly enjoying some fabulous natural surroundings elsewhere.  It might be a while before I get back to the lake, but I'll post an update as soon as I can.  In the meantime, here are some other beautiful winter scenes. 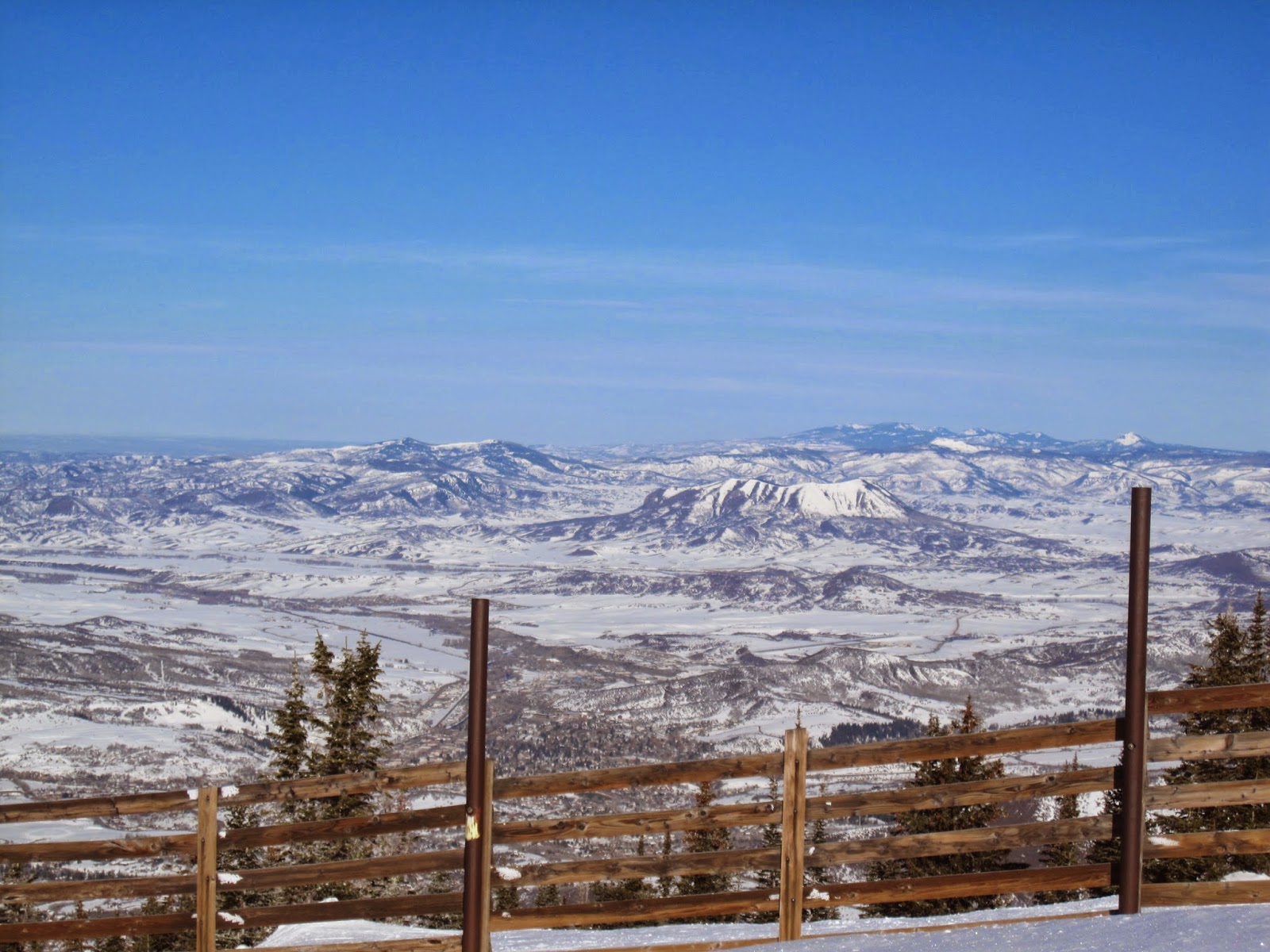 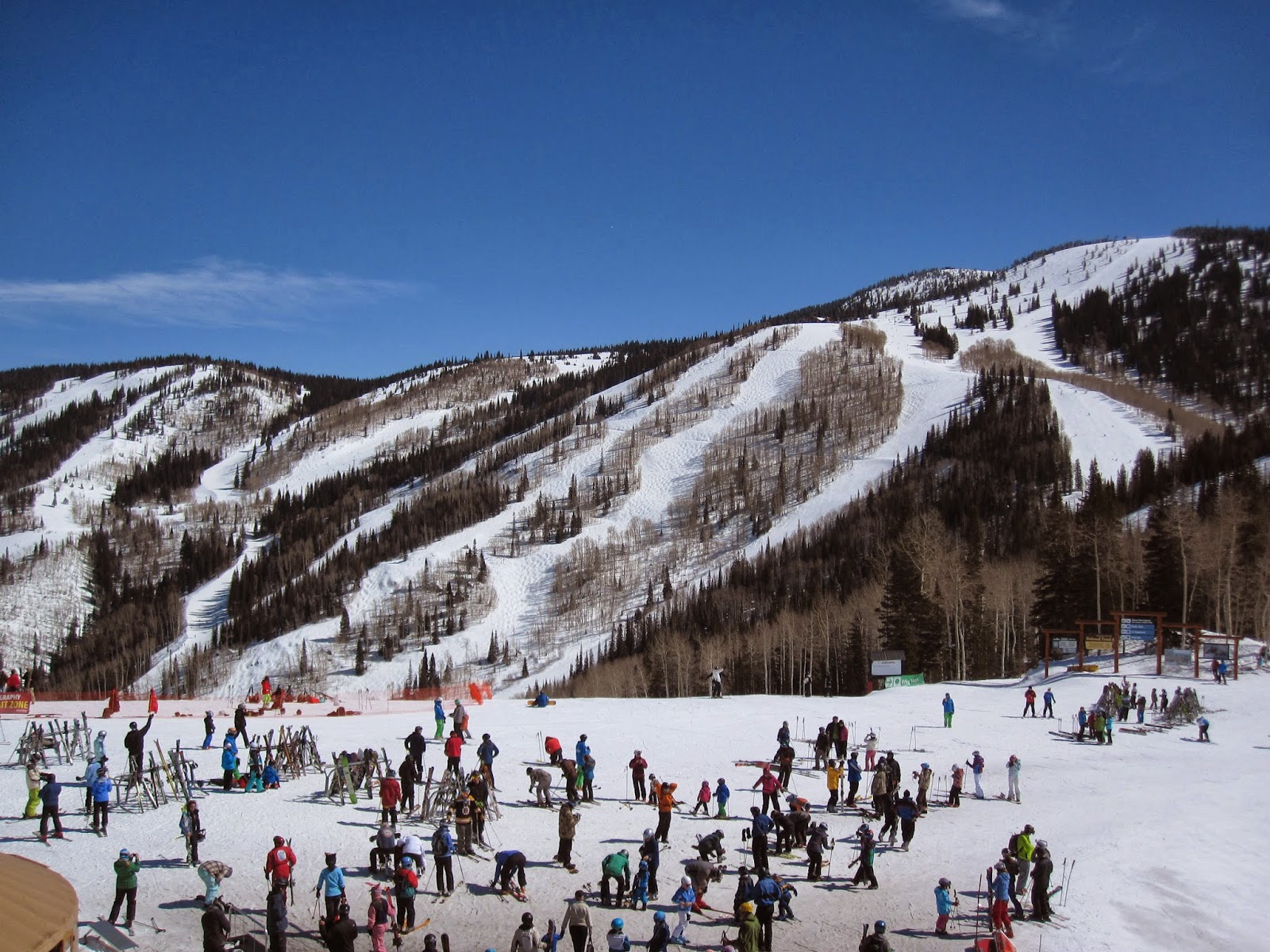 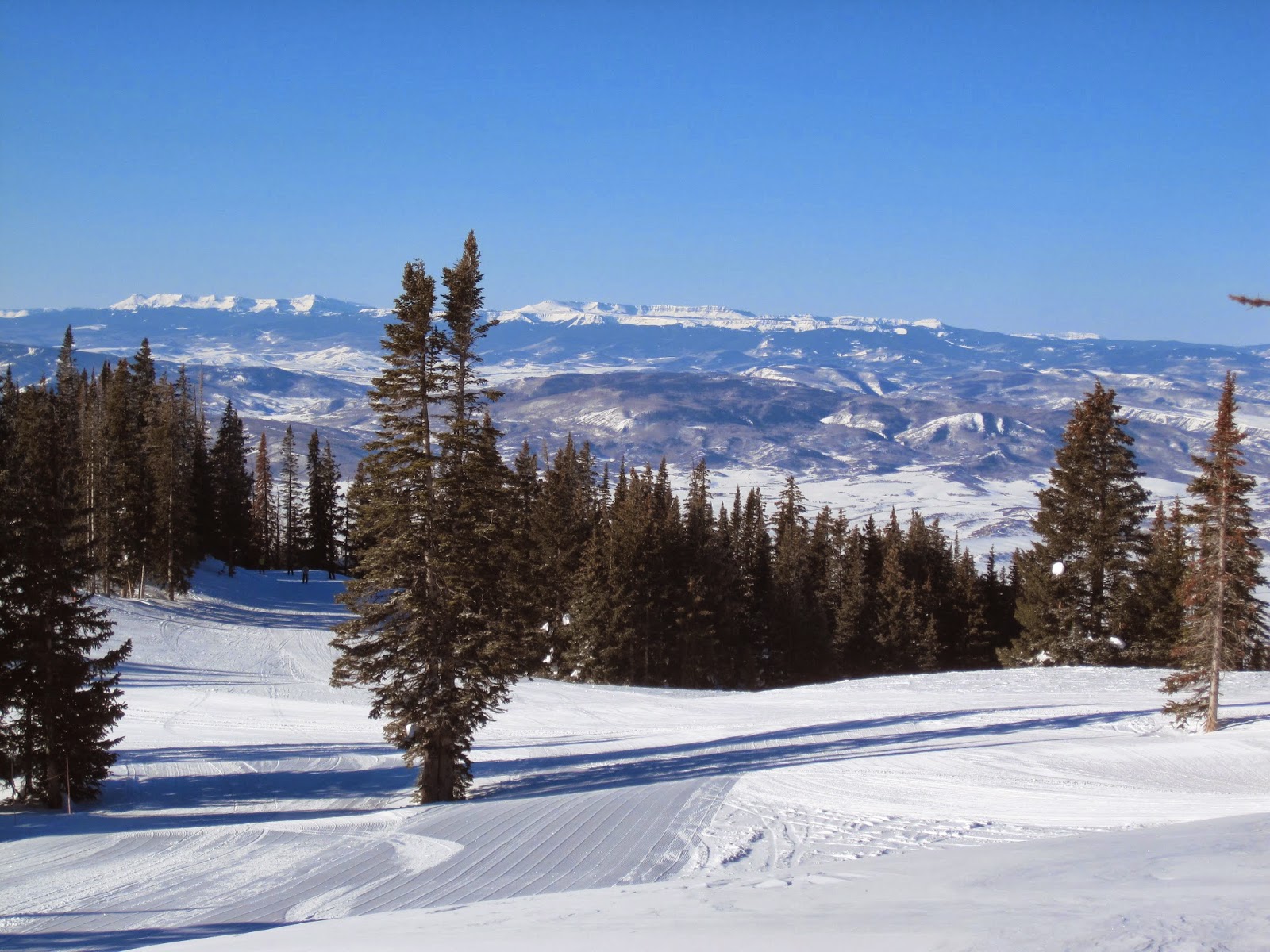 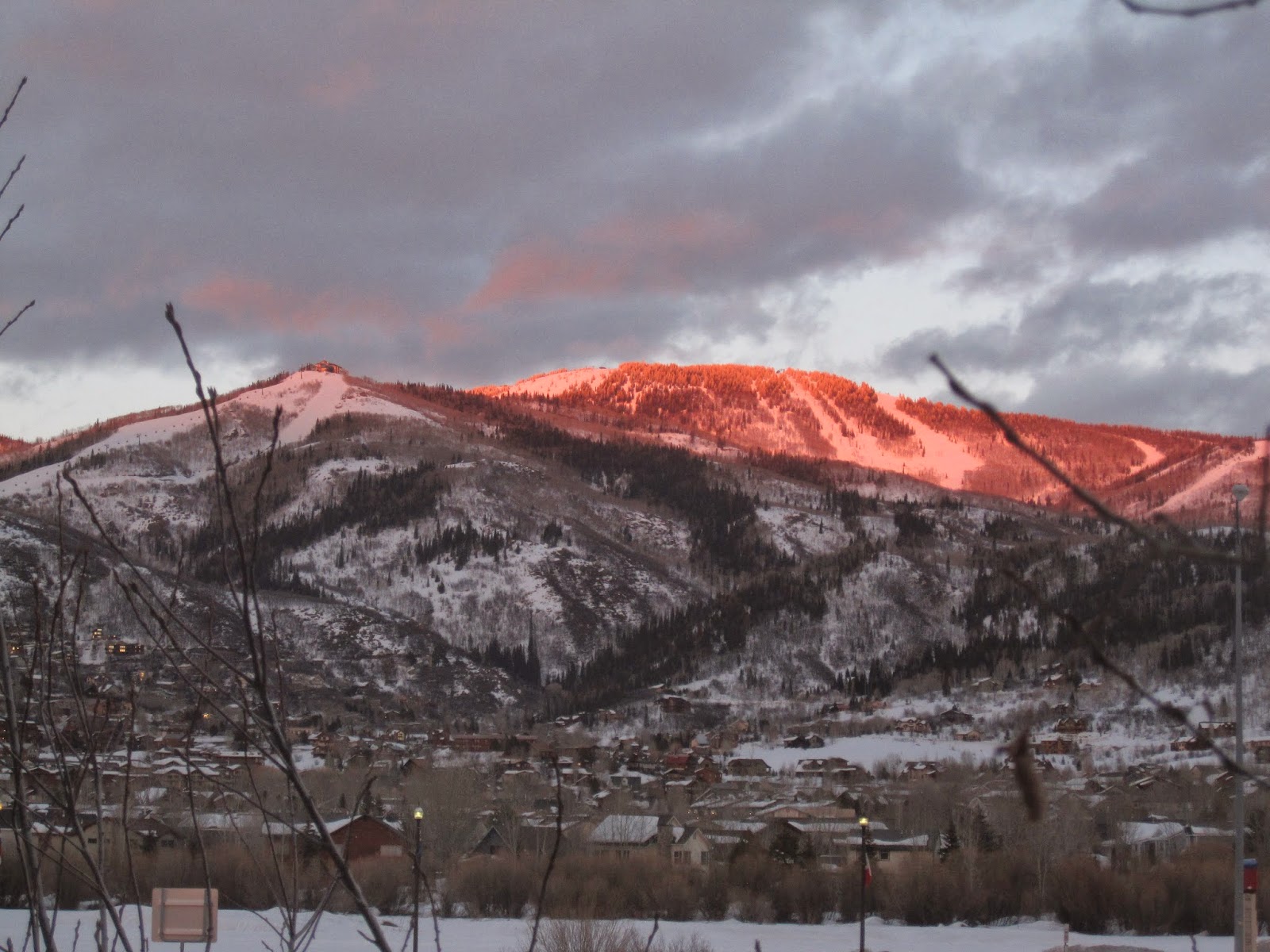 Posted by Scott Powell at 12:06 AM No comments:

More signs that spring is coming, albeit slowly:  Wide temperature variations.  On Friday the morning low was a cool 6.5 degrees below zero.  And the afternoon high was 41.7 - a 48 degree difference.  That's what happens when March sunshine on cloudless day collides with another arctic air mass.  It was a spectacular day;  I wasn't at Lake Wicwas, but was in the White Mountains, where we were treated to stunning views all day long.


Saturday was almost as nice, though the clouds were filling in as the day went on.  It was warm enough to soften the snow on the lake for some nice skiing, so I took a trek around the lake.  Once again I saw few signs of wildlife, but plenty of people enjoying the day.  The Lake Wicwas Turnpike continues to be heavily traveled with a well-worn path down the lake.


I didn't check the ice depth, but with another cold week it has surely only gotten thicker, so the route may be in service for quite some time.

No wildlife spotted this week, but here are some late-winter scenes from around the lake. 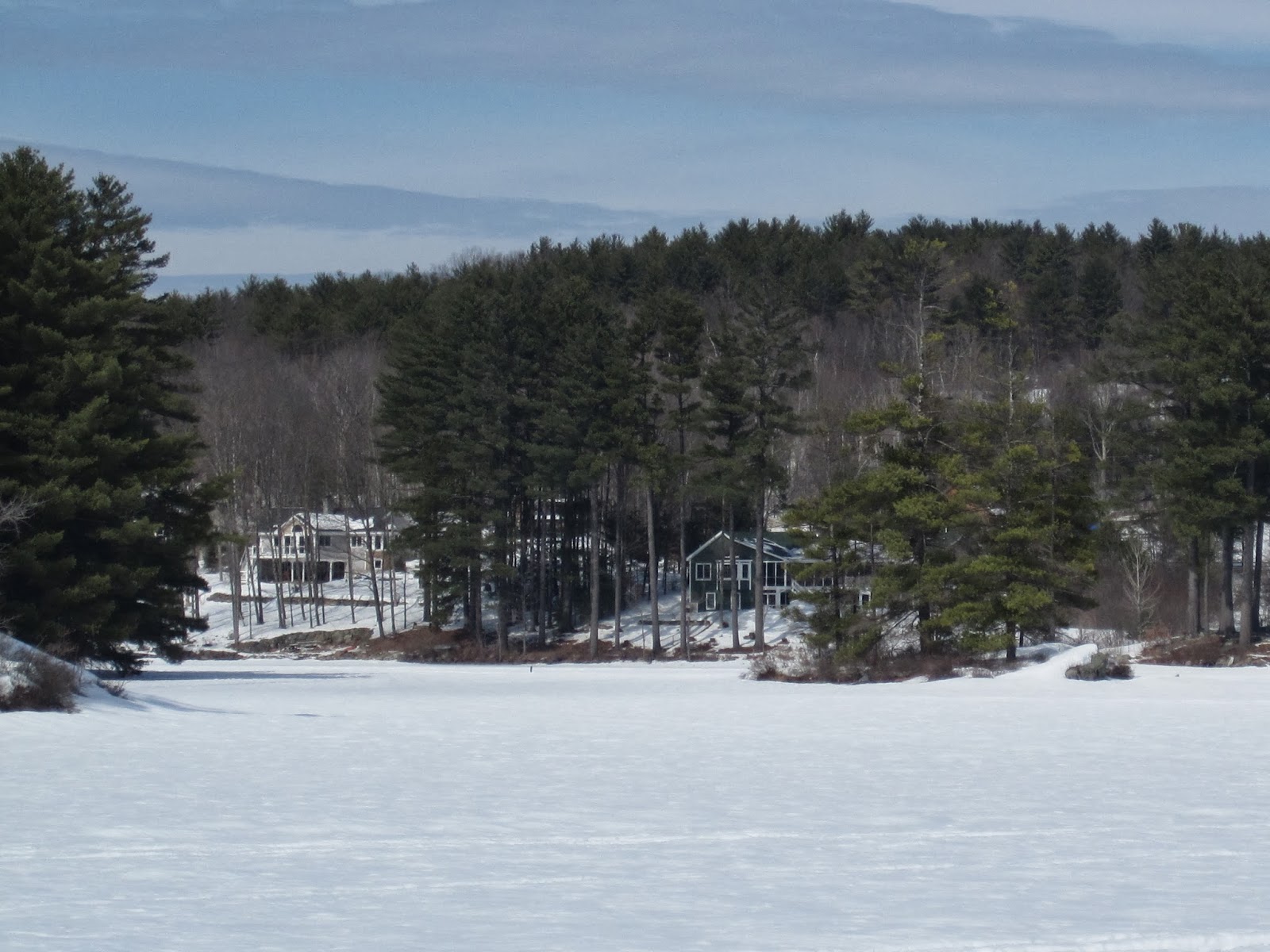 Posted by Scott Powell at 10:28 AM No comments:

Yesterday was the first day of meteorological spring and it was anything but spring-like:  the morning low was 5 degrees below zero!  At least the winds let up a bit, and it did warm up during the day so it wasn't too frigid as the day went on.  The news reported that Concord had three feet of snow in the month of February alone, and it isn't going away soon, as the forecast is for another cold snap to assault us this week with lows in the negative numbers and highs not getting above freezing.

At least the polar vortex can't alter the planet in its orbit.  Weather can't change the fact that the sun is higher in the sky and setting farther to the west.  There was a whisper of spring in the sunset on the first day of March.

The second day of March was much better than the first, and a Red Fox was enjoying the warmer temperatures and brighter morning.  At 7:30am a fox came off one shore of the cove, but then stoped and stared at the house, as it quickly detected our presence.  It immediately bolted across the cove at a high-speed gallop, stopping about 3/4 of the way to glance back at us.  It then took a somewhat more leisurely trot to the far shore, stopping to look again upon reaching the shoreline.  It hopped up the bank and sat down under a hemlock branch to rest and watch some more.  After a short respite it wound its way up the hill, checking out all the holes around the trees, looking for a warm breakfast of squirrel or mouse. 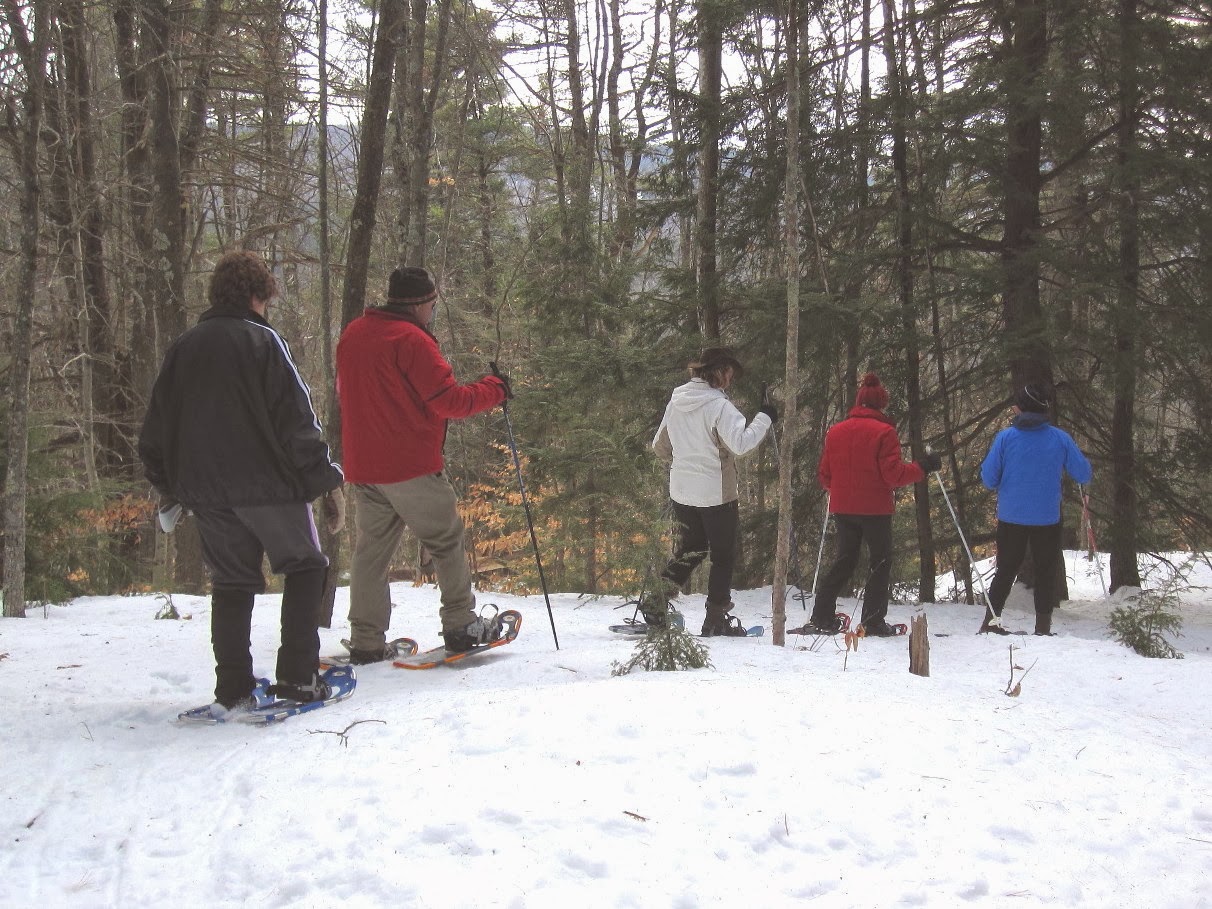 From the high point-of-land we enjoyed good views to the north and east thanks to the hard work of the foresters.

The crusty snow precluded much tracking, but we did see the signs of a Pileated Woodpecker working on ridding a white pine of carpenter ants in its wood. 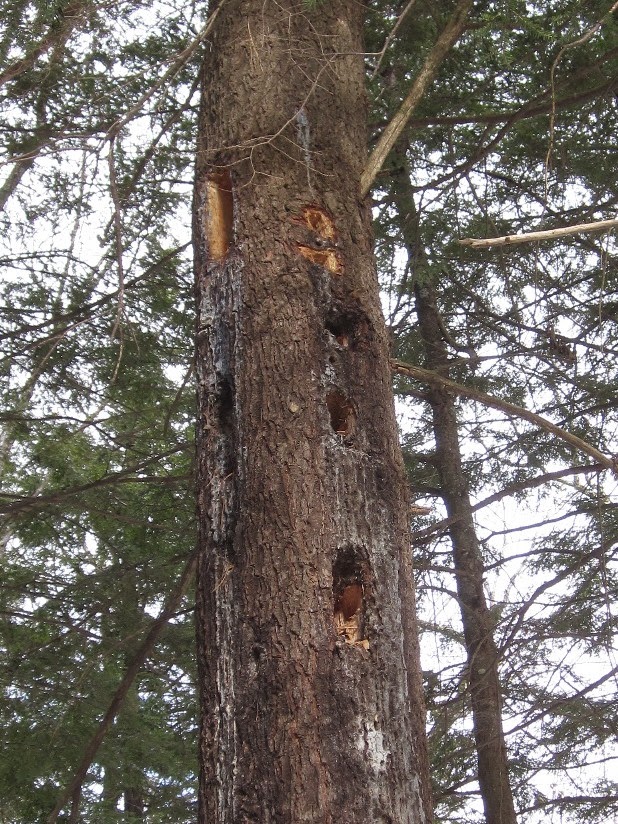 It had been working on the tree for a while, including a little excavating since the most recent snow. 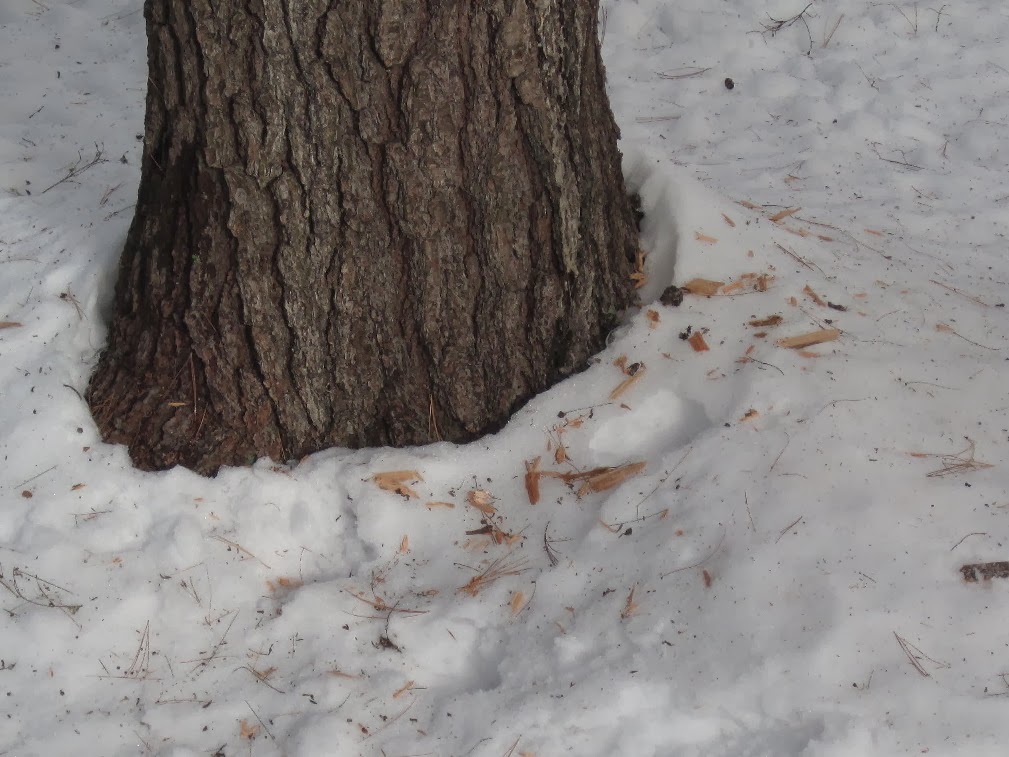 I checked the ice thickness on Lake Wicwas today - 22 inches thick in our part of the lake.  Boating looks to be a long ways off.... 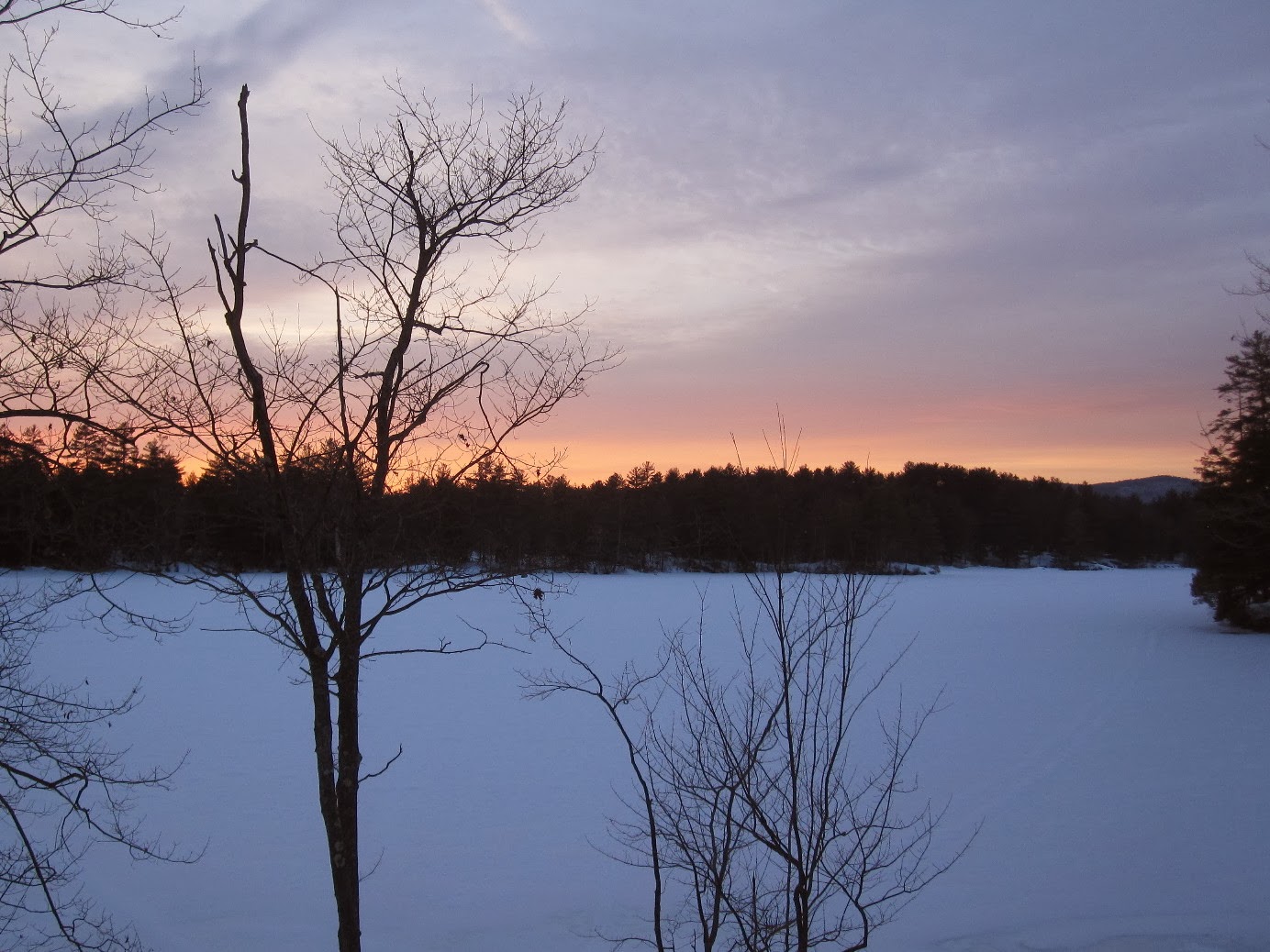 Posted by Scott Powell at 8:13 PM No comments: