Last week there was ice on the lake, this week, snow. 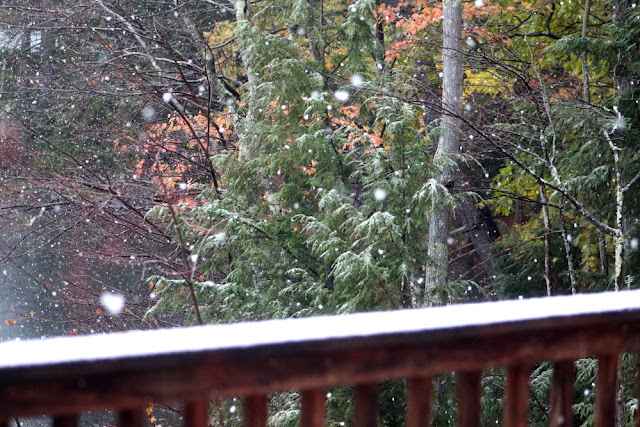 Not much, and it didn't last, but there was enough to paint the first winter picture of the season.  Maybe the beavers will take this as a hint to close up shop for the year.

Beavers are awfully busy right now as they insulate their lodges, collect food for the winter, and strengthen their dams to hold against the spring freshets.
They will use their collected food supply - safely stored under water - to sustain them throughout their long winter under the ice.  But before they bed down they are active in their preparations, including building scent piles to stake out their territory, and marking potential future lodge sites.

They're cutting down lots of trees, leaving naked sticks in the lake and on shore after they eat the bark off the branches they don't drag away to their lodge. 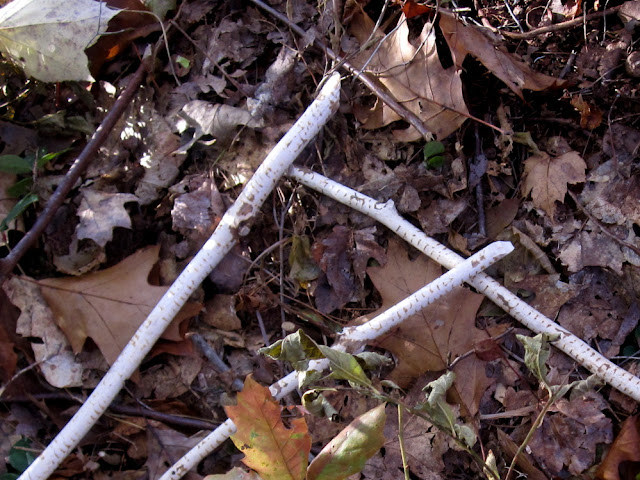 These rodents are very precise in all their work - look at how meticulously they remove every bit of bark and the nutritious cambium that lies underneath.

The beaver is the largest rodent in North America, and the second largest in the world (the largest, the capybara, lives in South America).  The beaver population seems to have grown this year just as smaller rodents such as gray squirrels, chipmunks and mice had a population explosion.  Those beavers can be frustrating as they cut down trees and blueberry bushes, but I try to remember that they were here long before I arrived.

I've mentioned before that I use chicken wire to protect the most vulnerable trees - it's a pretty simple and easy defense that seems to work very well.

When the lake freezes over the beavers will retreat to their lodges and leave our trees alone - perhaps this morning's snow will encourage them to call it a day and get to bed.

Now to a few pretty fall scenes around the lake.  There is still a little color in the trees, accentuated by the morning sun. 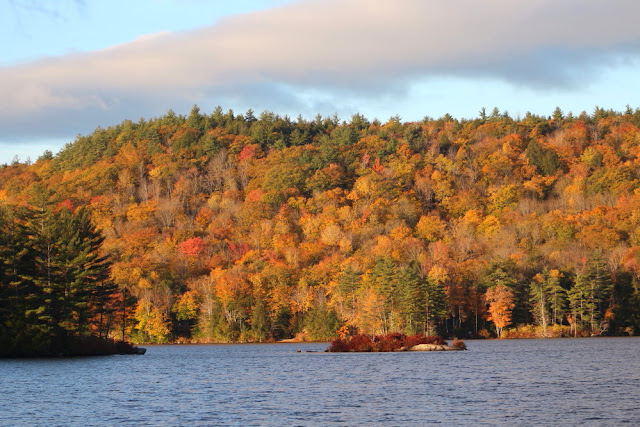 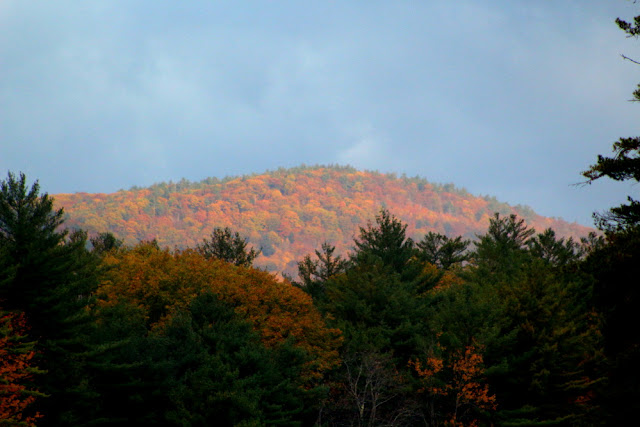 Though, sadly, most of the leaves are now on the ground.
It will be a little bleak around here until we get a lasting dose of white gold.

Posted by Scott Powell at 12:39 PM No comments:

Yes, that is ice on Lake Wicwas.  Only in one protected cove, but nonetheless, on October 19th, it's the earliest I remember seeing ice on the lake.  The prior earliest date in my records was on October 28th, back in 2011, and that occurred where I usually see first ice, in a marsh beside Sheep Island.  This year it formed on a night when the temperature dropped to 28 degrees and there was a light frost with a few ice crystals forming on low-growing leaves. 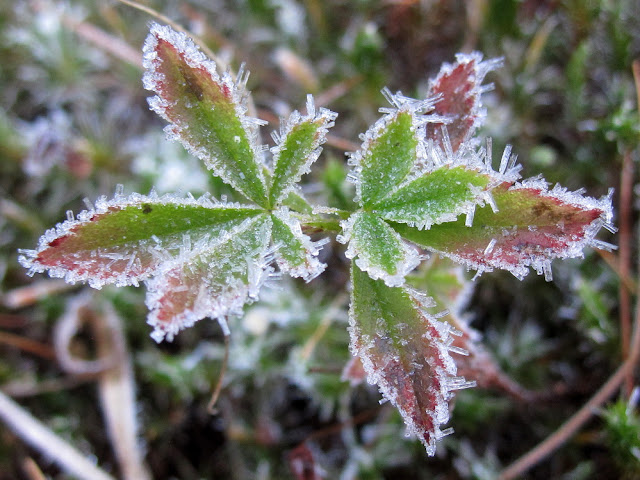 There should be more opportunities to see these form over the next few weeks.

We took a trip to Colorado last week and there was a lot more ice and snow out there, at least at elevations above 10,000 feet.

Not to be outdone, New Hampshire's Mount Washington, almost 4000 feet lower in elevation, also had some snow last week, but they weren't skiing there like they were at 12,000 foot high Loveland Pass in Colorado.

At lower elevation we found a New England Thanksgiving favorite.

It seems turkeys are just a plentiful in Colorado as they have become here over the last 20 years.

On a couple of hikes in Steamboat Springs I found larger wildlife up at snow level, and signs of  even larger wildlife down below the snow line.
That's one large pile of bear scat - larger than those I find in the Lakes Region.

It was nice to find some good color in the trees when we returned, though the peak color is moving south now.


I was out on the lake yesterday; it was pretty, but rather windy so I didn't see any bird action, but I did hear a loon on the lake earlier in the week. 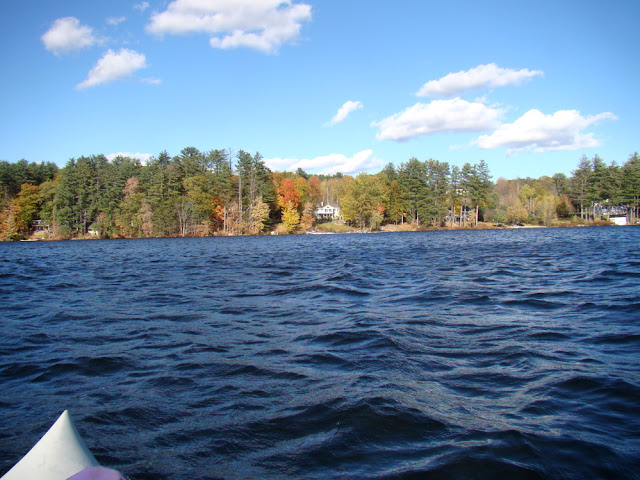 If you drove up to the lakes from the south this weekend you probably had a beautiful trip.  I'm still planning on another hike or two to take advantage of the fall weather and the increased viewing through bare branches on the trees.  Maybe a few more paddles on the lake too - we'll see what the weather brings us. 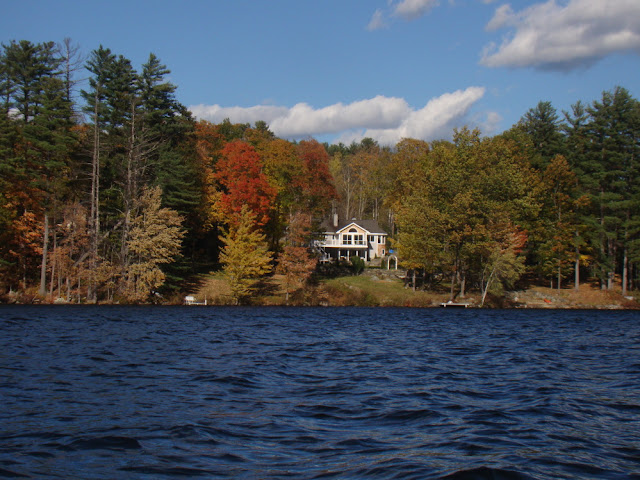 Posted by Scott Powell at 3:12 PM No comments:

The last summer breaths of New Hampshire's flowers and trees are being heard this week as they drain energy from their solar collectors and transfer it to their roots and seeds to power next year's life.

As photosynthesis ceases, hidden colors are revealed in both leaves and berries.  These Indian Cucumber-root berries are some of the largest I've seen.
It must have been a good growing season for them as plants put a lot of energy into growing seeds.

On the opposite end of the gray scale from the Indian cucumber-root berry is the fruit of the White Baneberry plant.

This stunning and unusual white berry ripens in late summer or early fall, and though it is native to the area, this is the first time I recall seeing it.  Though pretty, it is highly poisonous, with both digestive and heart risks including cardiac arrest.

Nature is giving us interesting, colorful berries this time of year, but still, the leaves take the gold for the sights of the season. 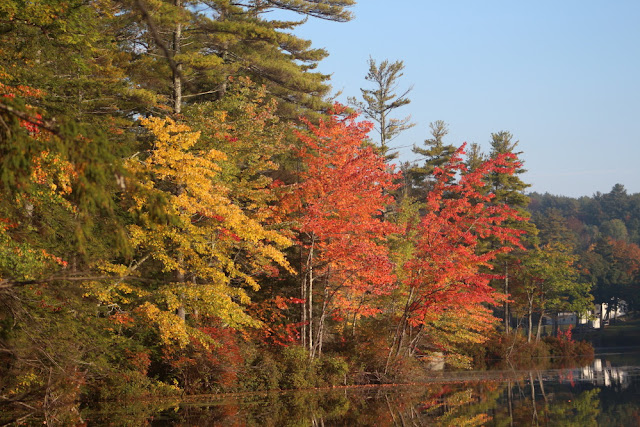 It's worth appreciating every bit of color right now, as it won't be long before November-drab dominates the landscape.

Enjoy it now:  Mount Washington reported their first snow of the season!
Posted by Scott Powell at 11:41 AM No comments:

If you didn't see the update to last week's post, the purple flower I couldn't identify on the Whitten Woods farm is a Closed Gentian.

Meredith Conservation Commissioner Paula Wanzer provided the identification. (Thank you!)  This is an unusual flower in that the blossom never fully opens - it was in full bloom when I found - that is as far as it progresses.  [Ref:  New Hampshire Wildflowers]  It is pollinated by bees, but only a few of the strongest bees are able to open the flower to access the nectar and deposit pollen inside.  The plant is widely distributed throughout the northeast, and is used in herbal medicine as well as in angostura bitters and some liquors and schnapps.  [Ref:  USDA Forest Service]  I wonder if the Whittens grew this on their farm for medicinal purposes.

Paula also identified a plant that I saw at the Whitten Woods trail head; this one is Lady's Thumb.

Lady's Thumb is a nonnative species but is not classified as invasive in our area by the US Forest Service as it doesn't aggressively take over indigenous plants, though they will dominate disturbed ground as in the parking lot at Whitten Woods.  The legend goes that a lady with a dirty thumb left a smudge on a leaf and it has been there ever since.  [Ref:  NH Garden Solutions] 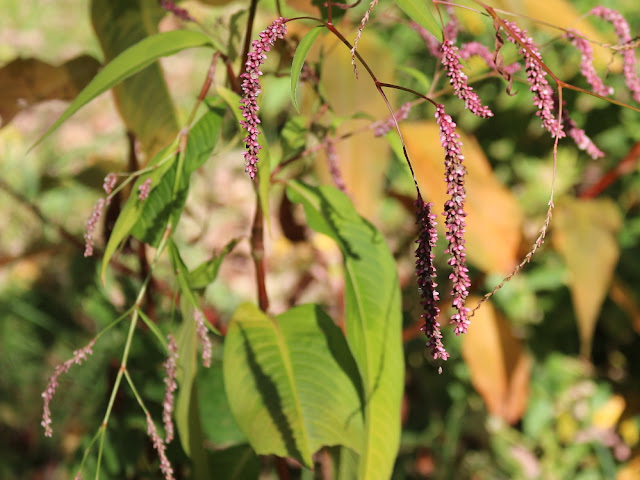 Here's a pretty caterpillar I found right outside the house on Friday - this is an American Dagger Moth.

It looks a little scary, but it's harmless. 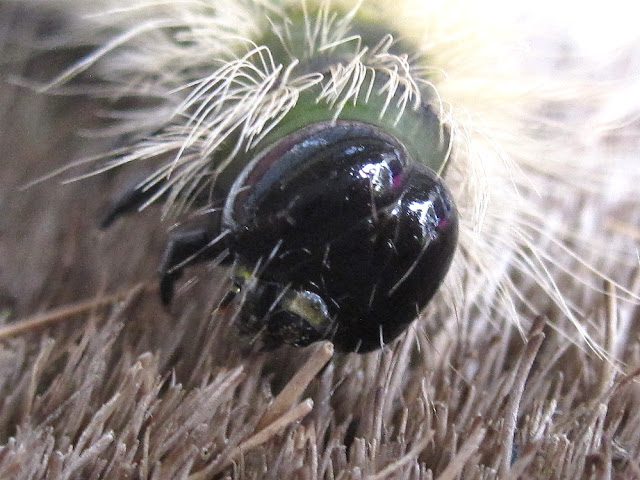 I find it interesting that such a visually interesting caterpillar turns into a completely drab moth.

And here's another cute little creature I found - I'm not sure what kind of spider it is, but it sure looks cool with those four beady black eyes staring at me. 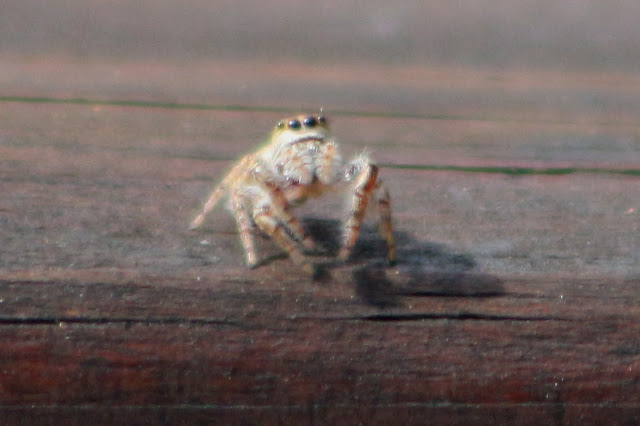 The fall colors are starting to pick up now, especially maples in the low, cooler, wet areas.  Over the next week there should be some really nice foliage in the Lakes Region.
It will be a perfect time to visit Whitten Woods or any other nice view point in the Lakes Region.

Posted by Scott Powell at 11:21 AM No comments: