It's nice to have it looking like winter at Lake Wicwas.  A couple more storms brought light fluffy snow to the area, enough to allow some skiing on the more gentle and smooth terrain, but the snow was so light it was barely sufficient.  After the first storm we had a sunny and calm morning. 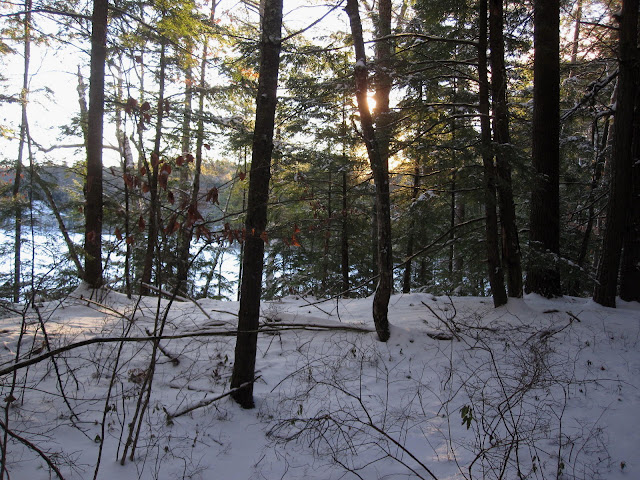 After last night's storm, today was quite cold and windy.  And it looks like tonight will be the coldest day of the year so far, and the wind is still howling at 20 to 30 mph, bringing wind chills down to ten below zero.  But the forecast looks good enough for the travelers to escape before the weather gets bad again.  Have a great winter in the warm south!

Our neighbors were fortunate enough to see a weasel, probably an Ermine, snow white with a black-tipped tail, before they left.  It was bounding across their property with a mouse in it's teeth.  When it saw a human it dropped its kill, and dashed off to hide, but after waiting and watching quietly, it returned to collect it's dinner and dash off with it.  A pretty neat sight one is only likely to see in the winter.

The next day I found these weasel tracks in the fresh snow - the distinct double track of a weasel, and based on the size of the track it is likely an Ermine or a Long-tailed weasel.


On Wednesday I saw an interesting flying creature - actually, I heard it first.  This extremely noisy apparatus came flying over the lake in the early afternoon. 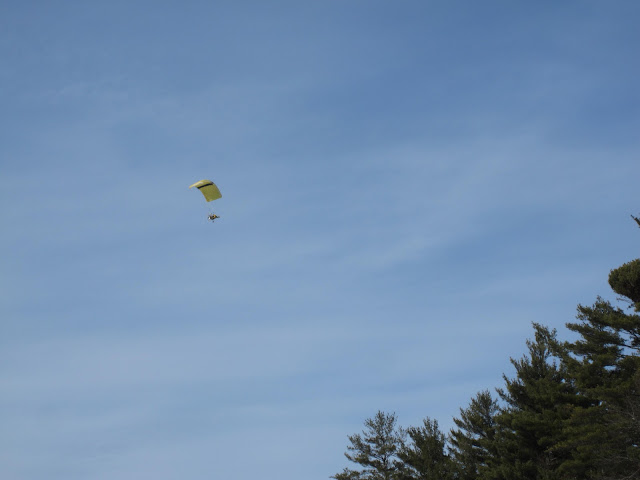 An ultra-light must a great way to see the area, but it sure doesn't look all that secure hanging in the air barely above the tree tops.  And it certainly isn't a peaceful ride. 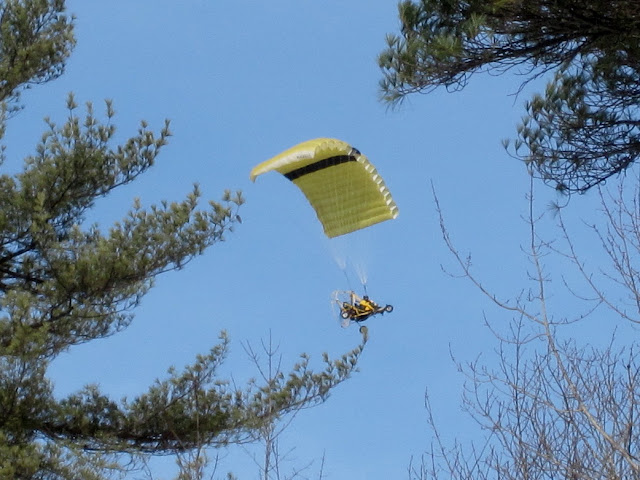 I was rather surprised to see see the lake still not completely frozen as recently as Friday.  The entire wide portion of the lake, from Loon Point, down along Sheep Island, and over to the Rawson Wood Islands was still open.  The picture below was taken from the Hamlin area, looking east towards Corliss Hill.  The cold weather tonight after the snow should finally freeze it up, but probably  not safely.  I measured four inches of ice about 20 feet out from shore in our cove a few days ago.

Posted by Scott Powell at 9:50 PM No comments:

Christmas day was beautiful at Lake Wicwas.  It started with a fresh coating of white, which became absolutely brilliant when the clouds broke and the low sun reflected off the lake.


One of my favorite aspects of snow on the lake is watching long shadows move across its surface as the low sun transits the southern sky.  It's an effect you can't see in the summer, or even when there's ice on the lake without snow cover.

We are now past the winter solstice, and the days are already lengthening.

After sunset the moon rose with the planet Jupiter acting as its guide and pilot.  It added a dramatic finish to special day.
The last few weeks we have noticed an unusually large population of Red Squirrels.  One day we had six of them, all more or less sharing the dropped seeds under the bird feeders.  Usually they are quite territorial, but these were rather tolerant of each other, only occasionally shooing one away. 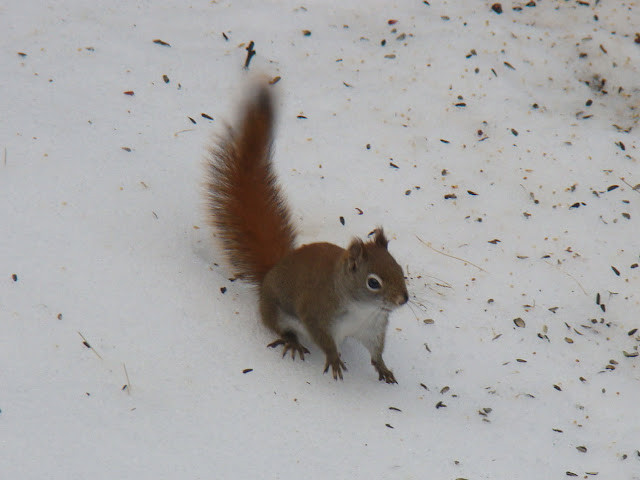 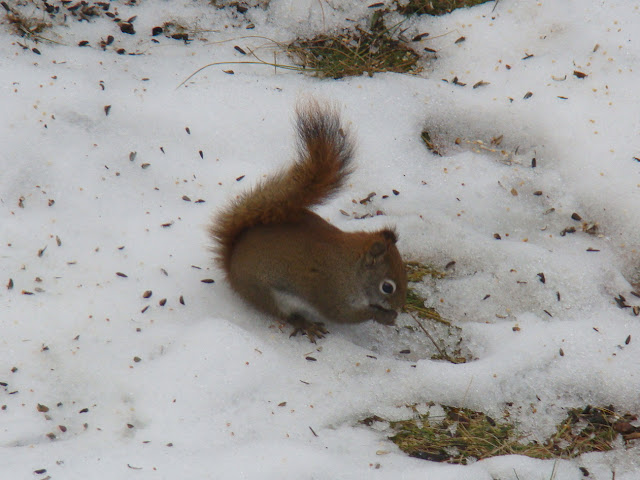 They are always pretty this time of year, with fresh, healthy red fur coats.  It must have been a good summer for them, either due to plentiful food supplies, or more likely, fewer predators. 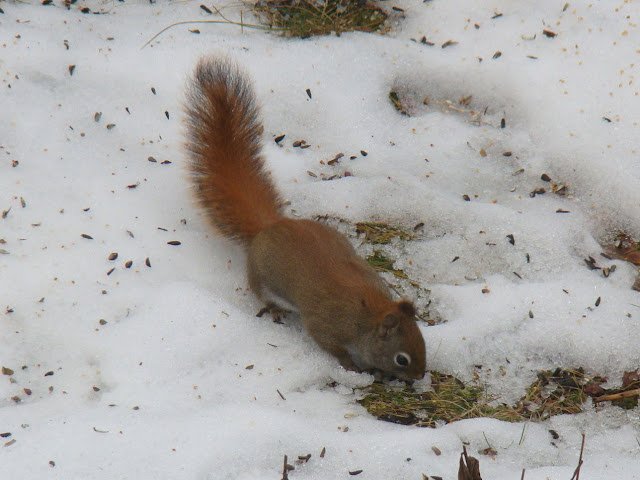 Posted by Scott Powell at 10:36 AM No comments:

It looks like Lake Wicwas is just about frozen over at this point, and with snow in the forecast, it may last even if we do get some warmer weather this week.  Snow cover would slow the formation of thicker ice though, so we'll have to be very careful before venturing out onto the lake in the coming weeks. 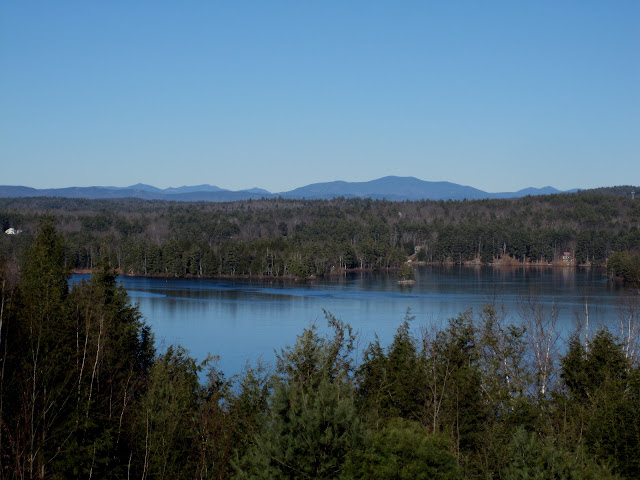 The otters don't have that concern - they don't have a problem if they find a thin spot;  on the contrary, they look for the open spots so they can come up and play on the ice.  Here's a set of tracks where they were hopping along and sliding on their bellies on the ice last week.

I took a walk up to Arbutus Hill Pond yesterday, and found it well frozen, with about 4 to 6 inches of ice.  There was also still some snow up on the slightly higher elevations. 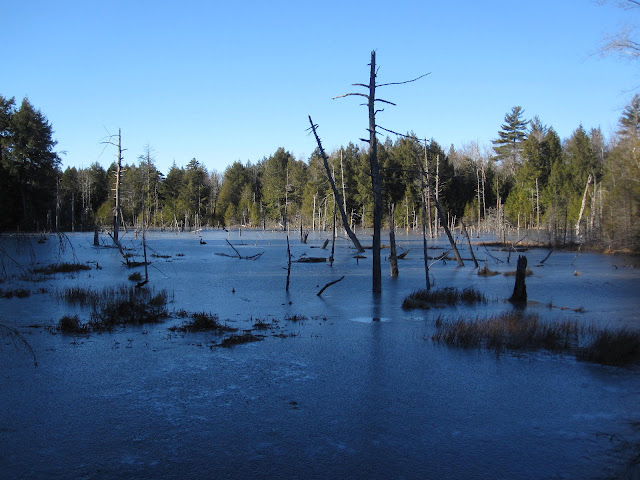 Along the way I found ice crystals growing up out of the wet ground, 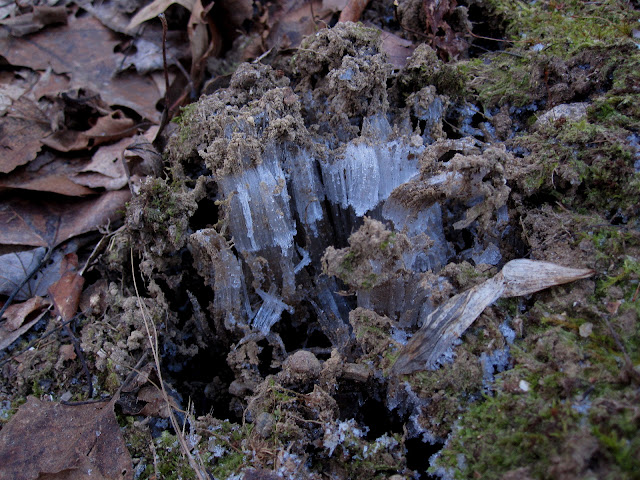 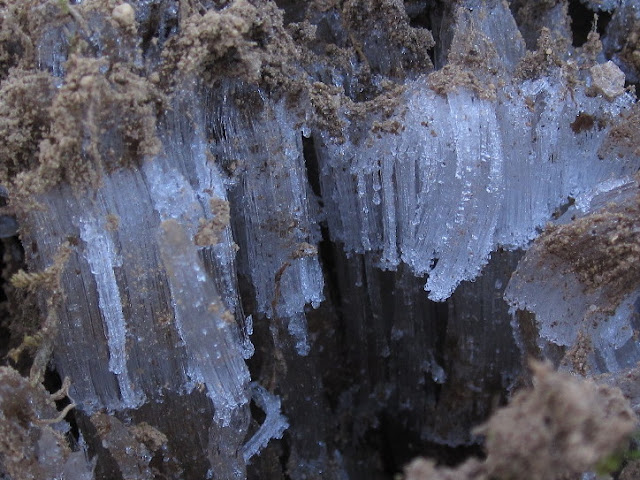 as well as some fresh crystals on leaves from the prior day's moisture. 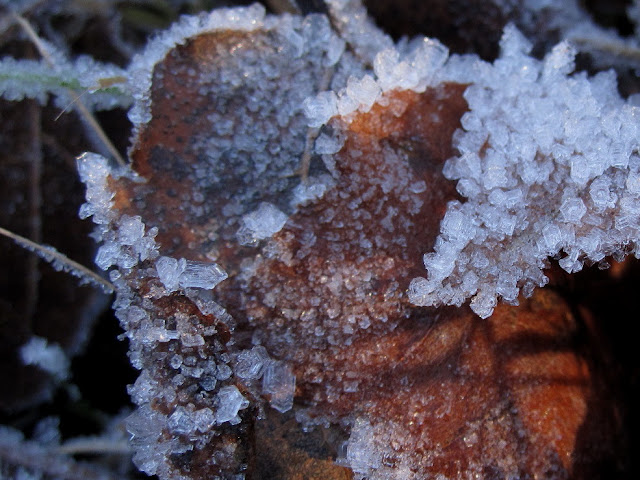 Back along the shore line, Linda saw a leech attached to a rock under the ice!  It was attached by its front sucker - leeches have two suckers, one at each end (they also have two brains!) and waving its body slowly in the water.  Normally, in the summer, they appear a solid dark black, but this one was light colored with spots, which is how they are described in the literature. 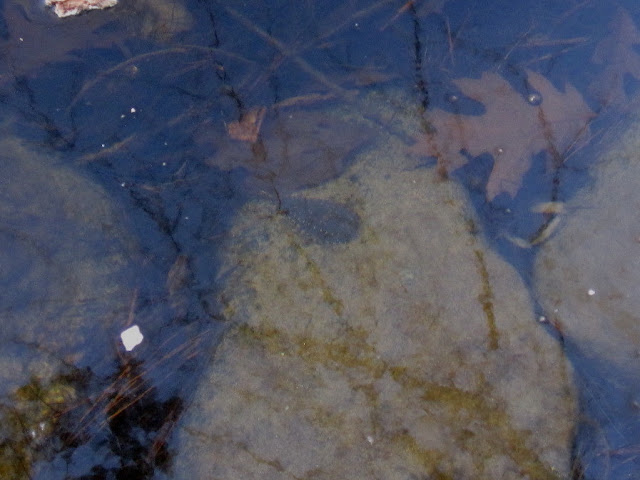 In reading about leeches I learned they aren't a risk to humans, as the parasites they carry cannot survive in humans.  They are adapted enough that they inject the enzyme hirudin into their host that prevents blood from coagulating, and also release an anesthetic so the host is unaware of their attachment.  If you do get a leech on you, it is recommended that you remove it with your finger nail, as they do not leave mouth parts behind like a tic.  You should not use heat or salt;  that will release the leech, but it will first disgorge its stomach contents into its host -

so forget that African Queen movie scene with Humphrey Bogart and Katharine Hepburn!

Posted by Scott Powell at 9:01 AM No comments:

Another week with more gray weather, and another light dusting of wet snow on Lake Wicwas.  This front dropped maybe as much as a half an inch!  There wasn't even enough to penetrate the dense foliage of the hemlock trees, which created some pretty contrasts between fall and winter within just feet of each other. 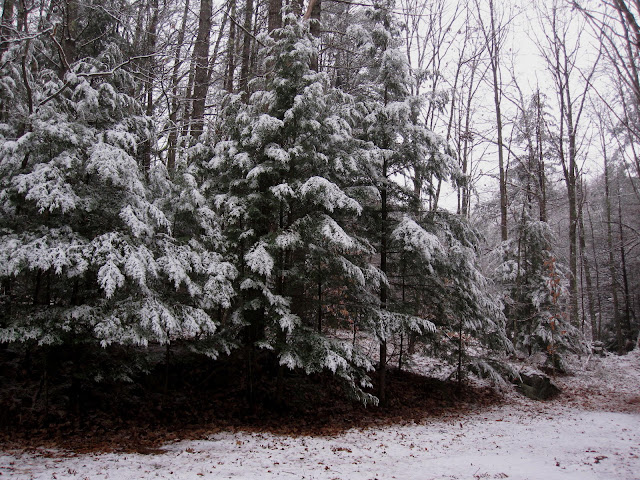 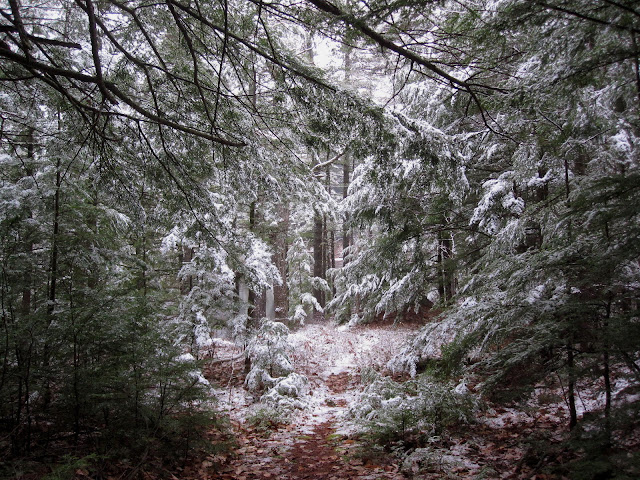 Another conspicuous contrast is the Christmas Fern, appropriately named at this time of year, as it is just about the only non-brown color left on the forest floor come Christmas.  (The moss hangs in there to keep it company.)  These plants are celebrating Christmas along the Red Trail west of the lake Wicwas view point.

The lake must be right at 32 degrees, as the ice comes and goes with air temperature fluctuations.  This time around, however, it is taking the opposite approach from last week, freezing over the center of the lake, and leaving the edges open. 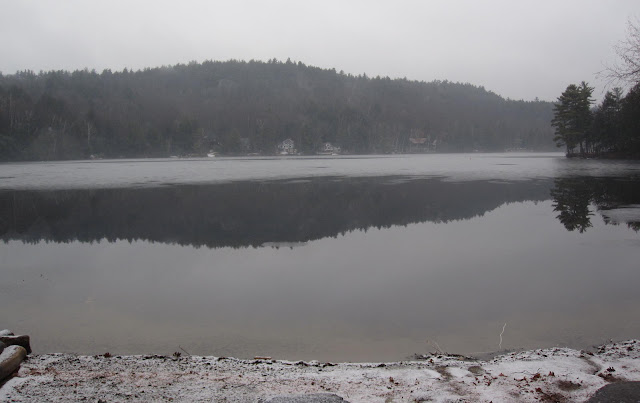 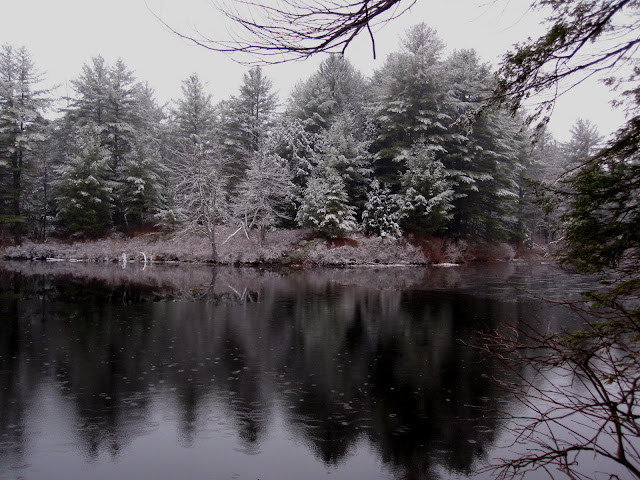 Rather dreary looking, isn't it?

But then the sun came up this morning, and brightened up the world with a pink sunrise. 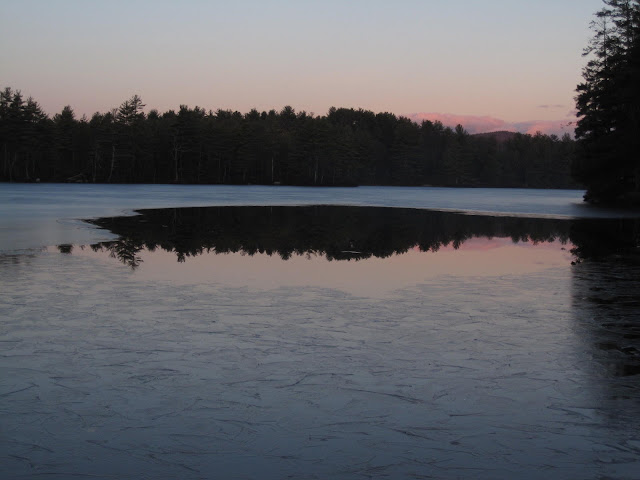 As the sun warmed the air and the wind came up the ice started to retreat, and by noon the entire broad-expanse of the lake was ice-free. 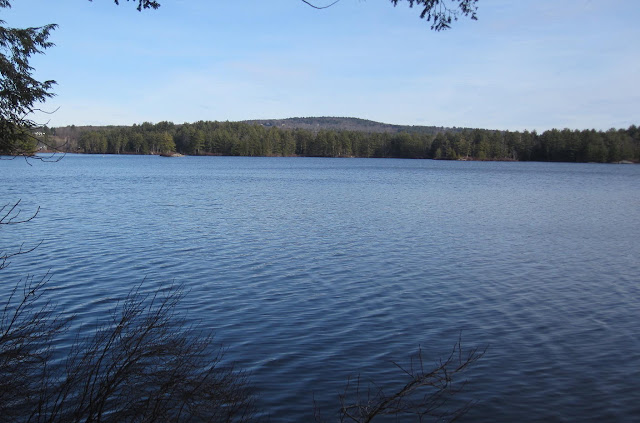 A good week of cold weather would get it completely frozen; maybe after Monday there will be enough cold nights in a row.

Posted by Scott Powell at 5:40 PM No comments:

December is here, and Old Man Winter is tightening his grasp on Lake Wicwas.  As the temperature drops the ice is spreading out farther and farther from the edges of the lake.  These pictures are from December first;  today it was too foggy to see what was happening out there, but early in the morning, it appeared as though the ice had covered much of the lake. 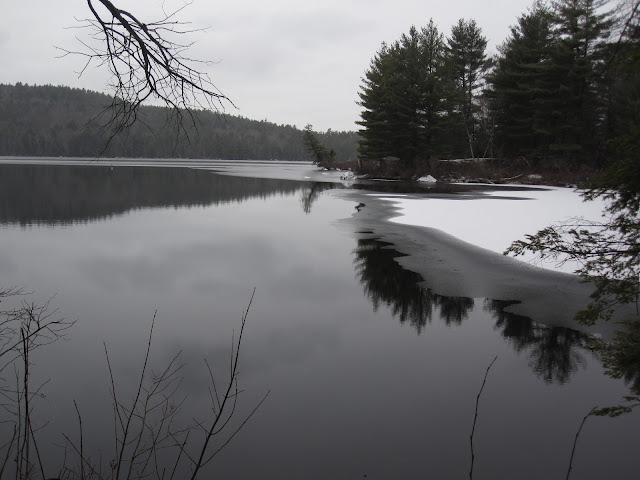 With warm weather forecast this week, it probably will reopen again.  The little bit of snow that fell helped the ice along, as it made a thin layer of slush on the surface. 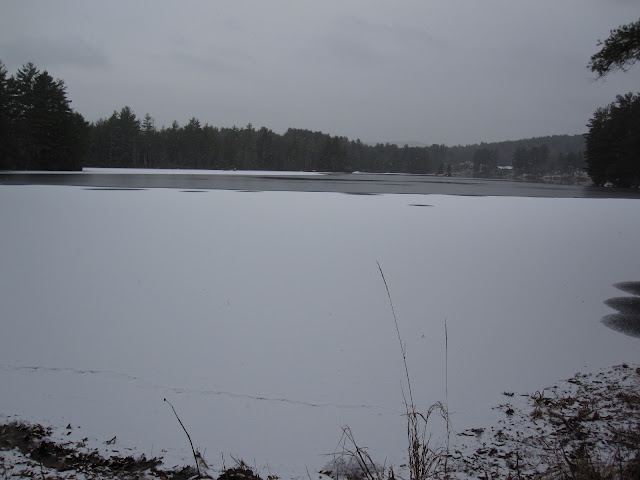 I saw nice healthy gray squirrel hopping along the ice, taking advantage of a fast and direct route, and I also found fox tracks crossing over the thin ice in a marsh. 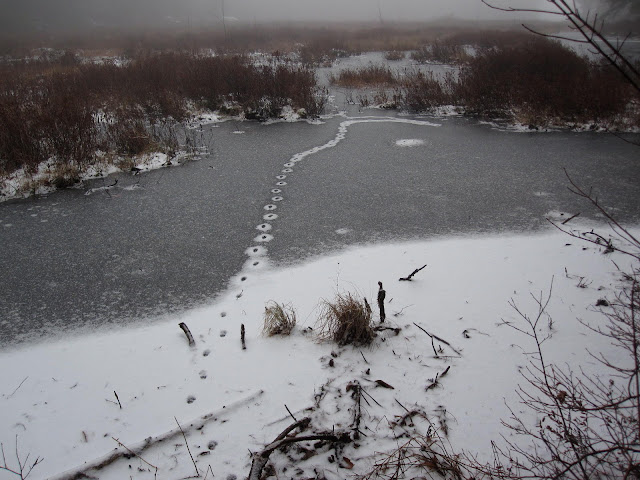 Brave animals, these first pioneers out on the ice.

There wasn't much snow - less than an inch - but it set a pretty picture around the lake, and and did allow looking for tracks to see what's been visiting the lake. 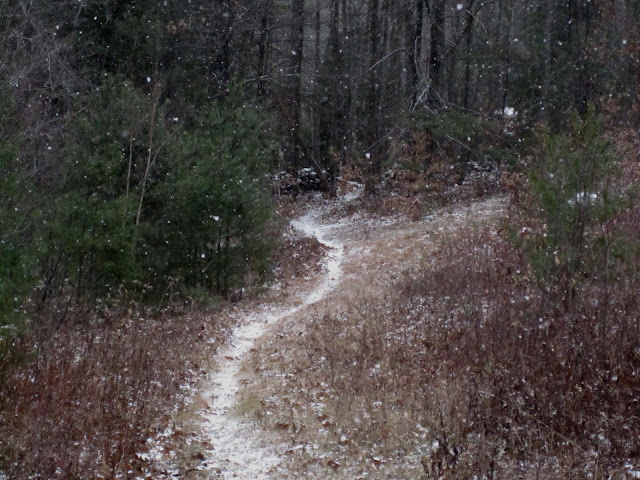 On shore, I tracked this same pair of foxes trotting a long distance on one of the trails around the lake.  They went right across the path of moose, though the moose passed before the snow fell.  It left a different clue of its presence.
This scattering of scat was deposited over a five foot diameter!

The diet of the moose has changed from the water-loaded diet of aquatic vegetation to a much drier diet of land based plants, as clearly seen in the individual pellets. 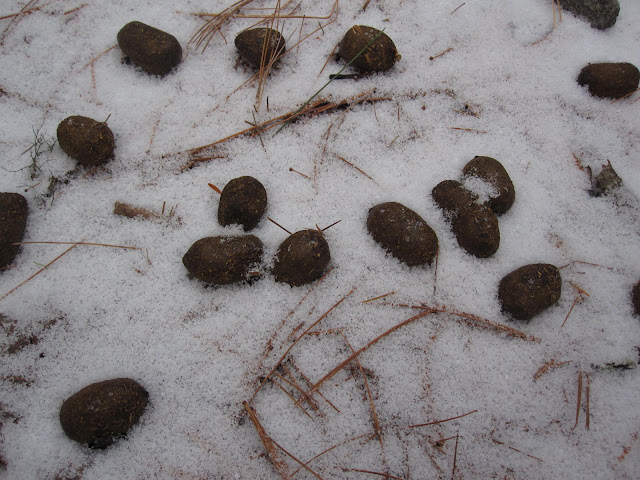 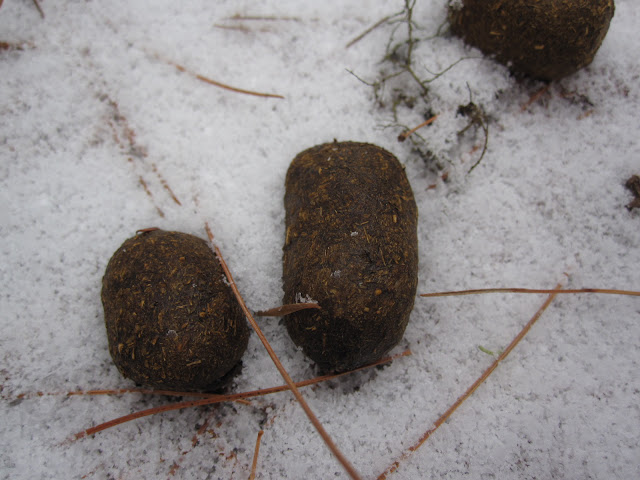 Looking back at these pictures, I realized that there wasn't much color around Lake Wicwas this week! 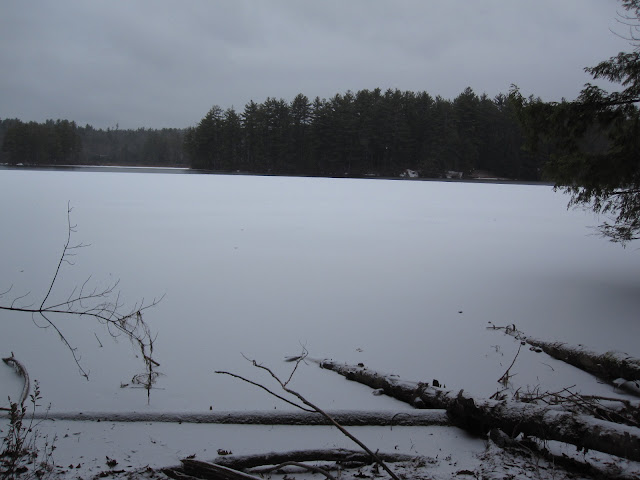 Posted by Scott Powell at 6:19 PM No comments: