2016 has been a great year for blueberries in the Lakes Region.  The hot sunny weather really helped and they haven't seemed to suffer from the lack of rain - especially those along the shoreline where their roots can siphon water straight from the lake.  It's not over quite yet, but if you haven't had your fresh lake-fed blueberry pancakes yet, you need to do it soon!

One fruit season that is over is the cherries.  Remember the abundant crop of black cherry growing back on July 17th?

This is all that was left just four days later!

One season I don't mind seeing come to an end is deer fly season.  There are still a few around, but they are waning.  And the dry weather seems to have reduced the mosquito and tic population as well;  it's a welcome early-start to the bug-free hiking season.  We'll see what some rain does to the insect population this coming week.

Deer flies are really nasty critters, just waiting in a sunny spot in the trail, hovering, like a drone in reconnaissance mode, ready to ambush whatever comes along, whether deer or human.

They even look evil.

In contrast, here is a much nicer hovercraft frequently seen around New Hampshire:

We took a trip to up the coast of Maine this week where we saw many osprey, which made me note that they haven't been around Lake Wicwas much this summer. 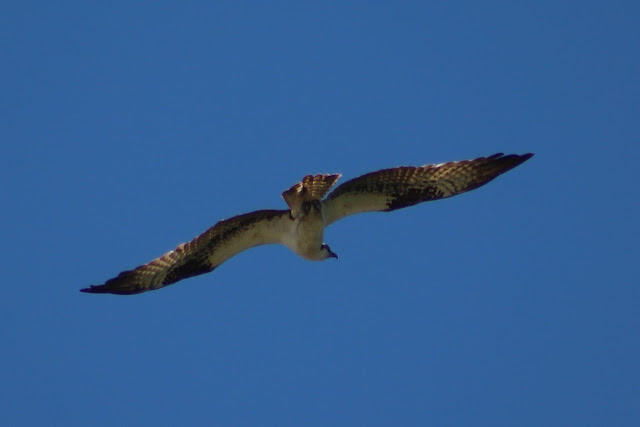 I have heard them on occasion so I know they are here, but I haven't seen any yet.  Last winter one of their favorite fishing trees - right on an island point with water all around - toppled over.

I used to have great views of them sitting on this tree, scouting for fish in the lake.

To close out this hot summer month of July (hottest on record, I've heard) how about a fiery summer sunset? 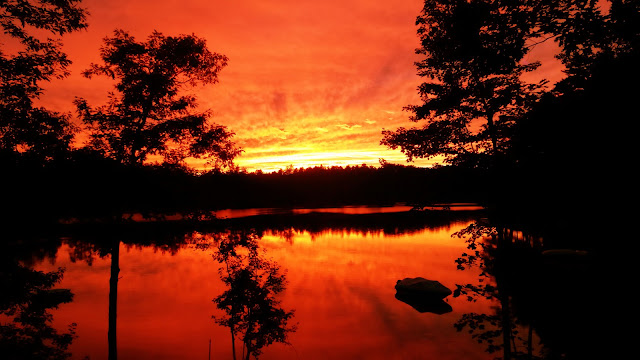 Posted by Scott Powell at 10:30 PM No comments:

The loons seem to be settling down and tolerating each other better these days.  The night time altercations have become less frequent and shorter in duration;  it's still common to hear a ruckus between 9:00 and 11:00 at night, but it's usually over in just a minute.  There are still two pairs and a bachelor(?) on Wicwas, though the lone bird was AWOL during the loon census last weekend, so Lake Wicwas contributed only four birds to the statewide count.  Hopefully another lake counted our fifth.

Without young to care for, the adults are enjoying this beautiful summer on the lake:  sunning, preening, fishing.  Lots of grooming to make themselves attractive to the other birds, rolling over to show their bellies, oiling their feathers and generally splashing about. 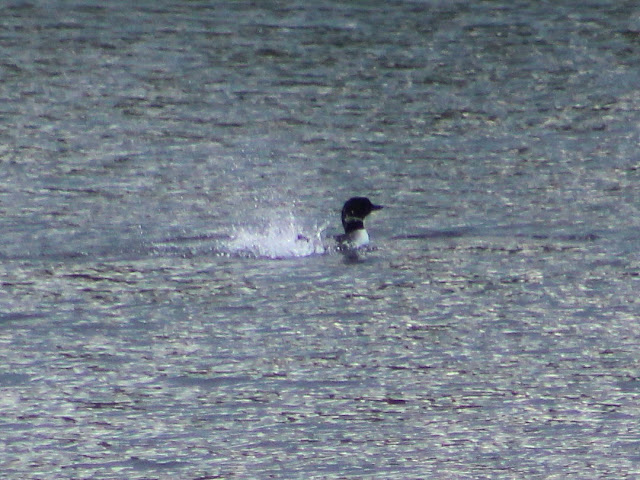 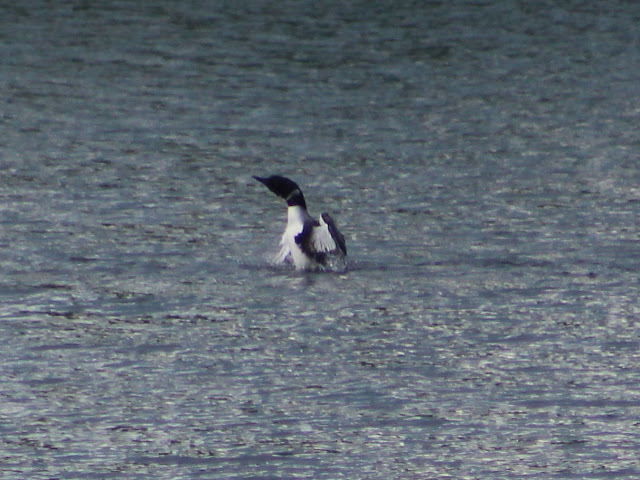 One evening we saw one loon come up with a tremendous fish and spend the next five minutes playing with it. 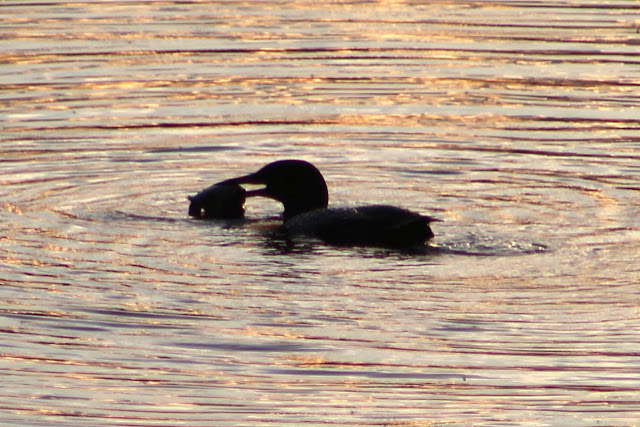 It whipped the fish back and forth in its beak and would then drop in the water only to catch it again;  sometimes the fish would almost get away and the bird would make a quick dive to grab it and bring it back up. 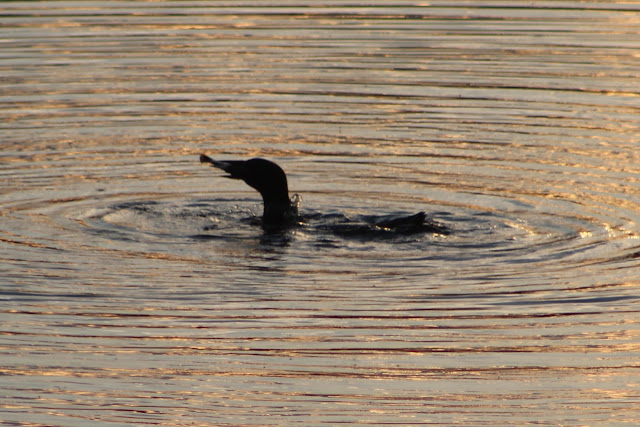 Eventually it decided it was ready for dinner and it raised its head in the air and swallowed the tired fish down head first. 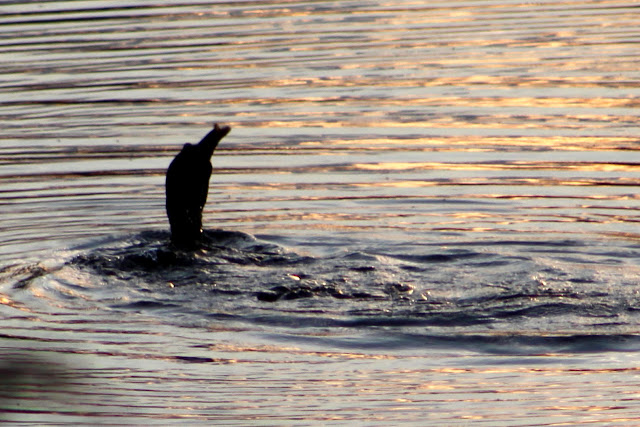 Only to have it get stuck in its neck on the way down. 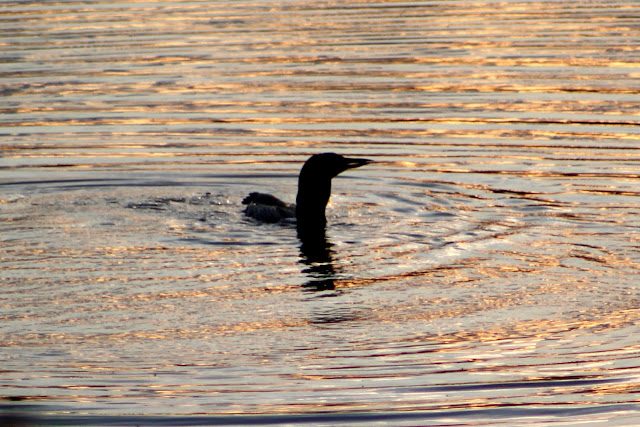 My guess:  It wanted to weaken it first because it didn't want a fish that large flapping around inside its gullet!

The gorgeous hot weather the past two weeks (it hit 95 on Friday) has inspired the wildlife to perform their summer musical concert, making hot afternoons a chorus of buzzing, chirping, and singing, from the clear flute of the wood thrush, to the song of the never-tiring red-eyed vireo, to the classic summer buzz of the cicada.  One interesting animal that doesn't join the band, but could be the conductor with those two long batons, is the Pine Sawyer. 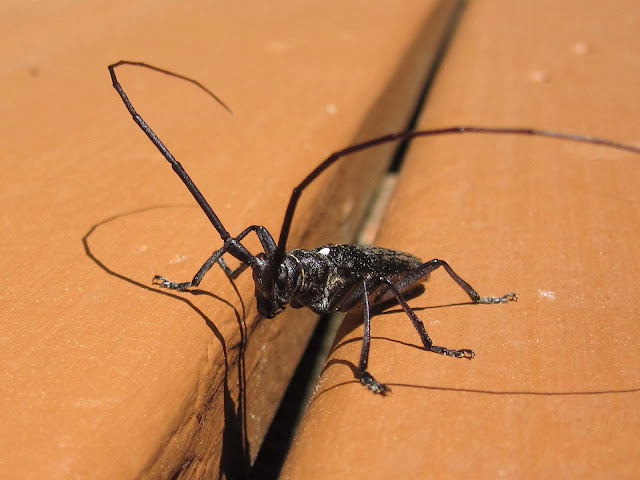 This member of the longhorn beetle family bores large, long tunnels in pine wood and can cause tremendous damage to felled trees as seen by these holes in a fallen white pine beside the lake.

Remember the logs that were intentionaly sunk in Lake Wicwas after the hurricane of '38? (See  6 March 2016 post.)  These are the primary insect from which they were protecting that wood, as pine Sawyers can greatly reduce the value of timber in just a few weeks.

Here's another summer insect which I always enjoy seeing, the mayfly.

Perhaps scary looking, but completely harmless, and a great source of sustenance to fish and other animals.  But look quickly, as their adult life lasts, at most, two days.

And one last harmless creature you may see out on a hot summer afternoon:  a garter snake.

If you're walking in the woods and hear a gentle rustle in the leaves rising up to join the summer opera, take a look down, and you may find one.
Posted by Scott Powell at 3:13 PM 4 comments:

Back on May first we had a late frost which coated the black cherry buds with a layer of ice.


At the time I wondered if it would have a detrimental affect on the Lake Wicwas cherry crop as it did on the New England peach crop.  But no, these hardy cherries came through it just fine.

They are starting to change color from green to red to black, and soon the fox and bear will be here taking advantage of the bountiful crop.  Birds will eat their share too, but even before the fruit is ripe the insects start to dig in.

This green stink bug has some amazing camouflage to help it hide from predators while it sucks juices out of the still-green fruit.

I did my mid-summer weed watch tour on a segment of Lake Wicwas this week, and I was happy to find nothing out of the ordinary.  Our Lake Host program continues to be successful in keeping milfoil and other invasive weeds out of the lake through education and boat inspections.  Far from being a chore, the process of weed watching is always an interesting event, as poking along the shores of a lake with a careful eye always reveals interesting sights.   Some of the more visible sights are signs of the beaver.  At one point I saw where a beaver had cut off some saplings to bring the tender wood back to their lodge. 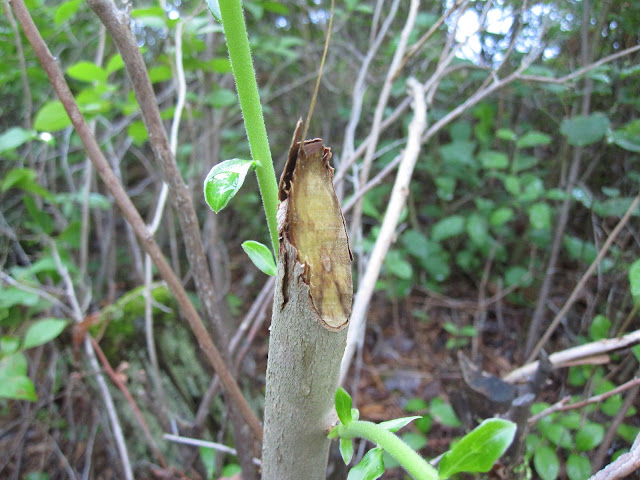 I also saw their attempts to increase the size of their kingdom by stuffing all kinds of debris in the top of the dam to raise the lake level.

An unexpected sight was to see a beaver swimming along through the weeds in the middle of the day.

I also caught a glimpse of a muskrat along the shore, but it eluded the camera.

On an exposed point were the left over shells from some aquatic carnivore - probably muskrat, racoon, or mink - that enjoyed a meal of fresh water mussels at a table with a view.

A weed watch tour is almost certain to reveal a red-winged blackbird chirping from the top of a reed or a branch hanging over the lake.

Of course there are always pretty flowers growing along the shore as well as in the lake.


I didn't see any osprey on this tour but I did see a large turkey vulture circling above me.

If you're wondering why the weed watcher program is important to the health of our lakes and our economy, take a look at this news story that WMUR aired on Chronicle which shows the sad story of what happens when milfoil gets into a lake:  The Milfoil Battle

If you want to get in on the action and do some weed watching of your own, just let me know and we'll get you started.  Who knows, maybe you'll find your own secret blueberry bush loaded with berries along some hidden shoreline.  And even if you don't, you're sure to see something interesting and beautiful along the shores of a New Hampshire lake.

Posted by Scott Powell at 8:59 PM No comments:

The holiday is over and Lake Wicwas is back to its quiet self, especially the past few days when after a lovely hot spell (it hit 94 degrees) the weather turned cold and wet.  Linda noted that yesterday's high temperature was lower than this past Christmas day!  But we sure did need the rain.  The moisture gave a great boost to the withering flora, as greenery from blueberries to weeds surged with a dose of moisture.  The blueberries turned plump and blue and consummated the first scrumptious treats of the year.

A little bit of moisture always brings out my favorite, colorful ground dwellers, the red-efts. 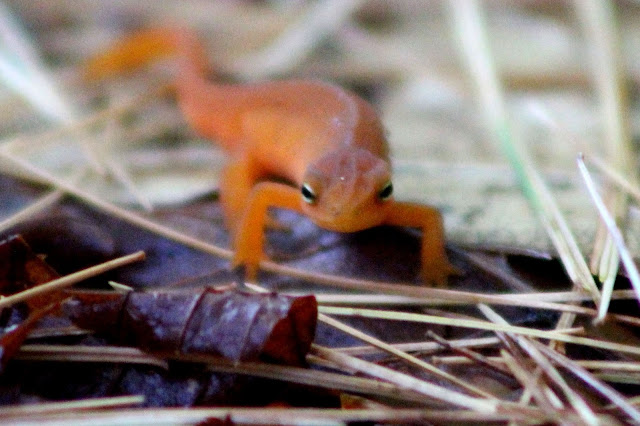 One must be careful walking in damp conditions to avoid stepping on these little guys.

On a hike up to Crockett's ledge before the rain hit, one of the nephews spotted this snake sunning itself in a protected crack at the very top of the cliff.


It looks pretty safe there from just about every threat!

The deer flies continue to be about as bad as I remember them.  (Do I say that every year?)  But the deer fly strips prove there is good batch of them out there.

You can get these - of course - at Amazon.

It's no wonder there are so many flycatchers around here.  Mrs. Phoebee may make a lot of racket, but she does her part in cleaning up the flying insect brigade.


A friend and good land steward spent many hours last week picking up the trash that collected along the sides of Chemung Road over the past year;  it looks great!  (Thank you JG!)  But it was sad to see that within hours of his work, the next installment of road litter had already begun. 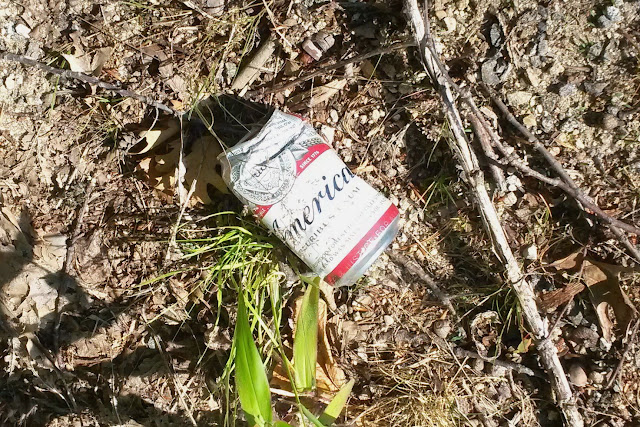 One would have hoped that someone buying a can with the word "America" on it would have a little more respect for the nation that bears the name.

Before the rain hit late in the week I found this tiny maple tree sprouting in the moss on a tree that fell into the lake many years ago.  It always amazes me how creative seeds can be in finding a place to roost.  This youngster won't make it to old age, but like many lake lovers, it sure will enjoy its childhood growing up on the shore of a beautiful lake. 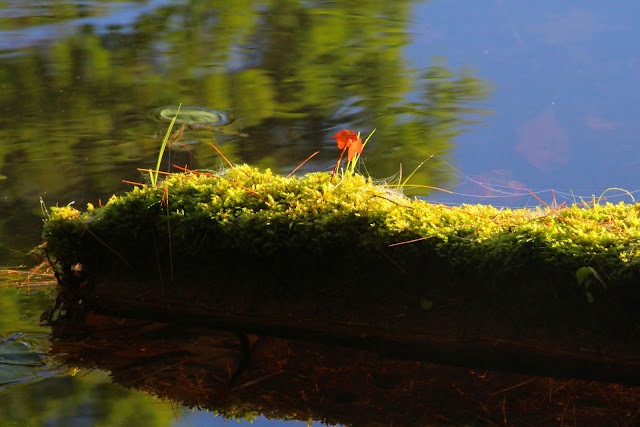 Posted by Scott Powell at 3:30 PM No comments:

Happy Independence Day!  This was a weekend for people on Lake Wicwas.  Everyone enjoyed a bright, breezy, beautiful holiday weekend which featured people enjoying all manner of activity on the water.

The stiff winds had the sailboats with their colorful sails zipping across the water. 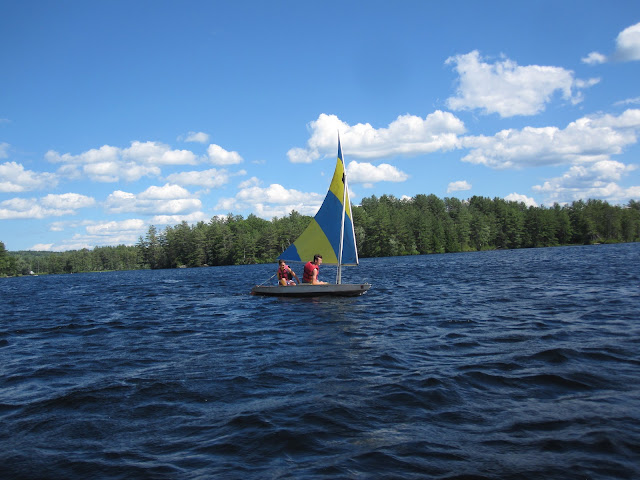 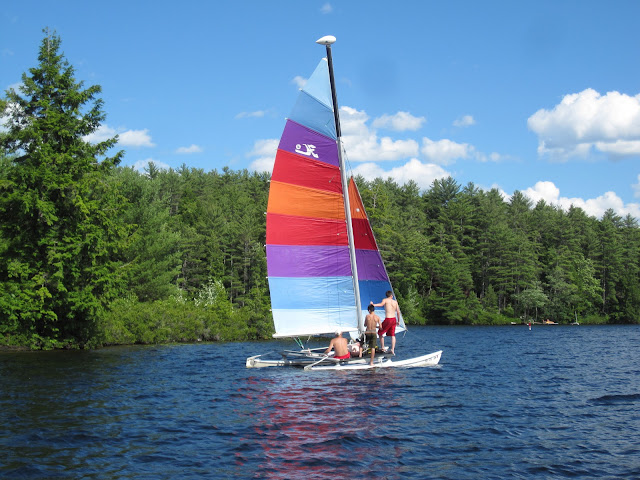 Sailing on a small lake is one of the more challenging adventures as the wind whipping around the mountains and islands provides a never-ending change of wind speed and direction.  If you can sail on a lake in New Hampshire, you have learned how to sail!

The fishermen prefer the early morning when the winds are calmer, but all day long they will poke along the protected edges of the lake in search of their prize. 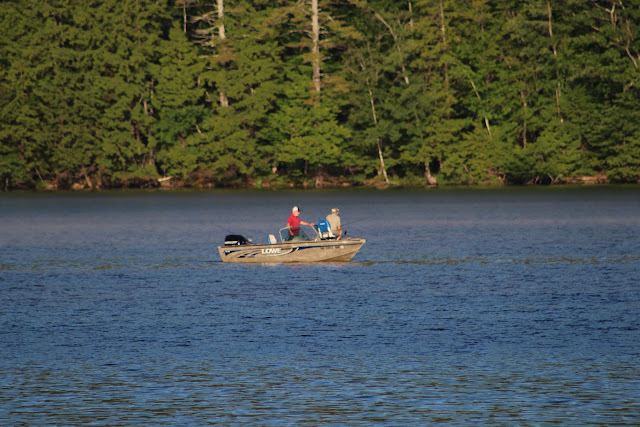 Paddlers of all types were out in force. 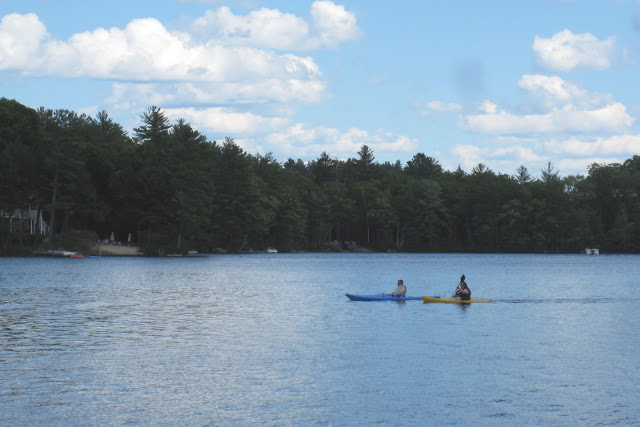 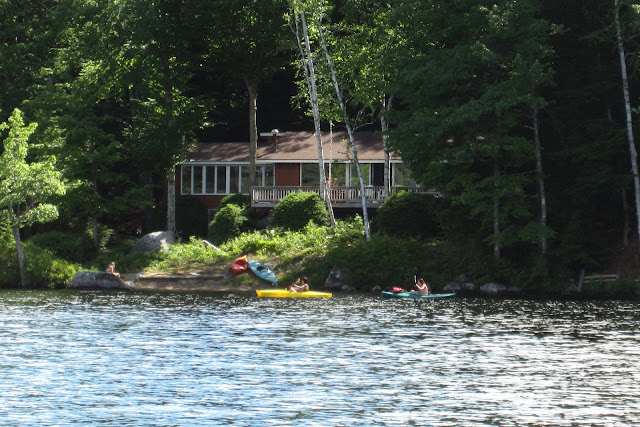 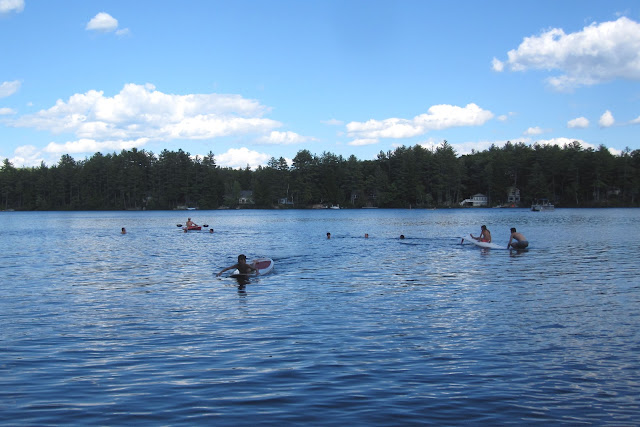 And people preparing for the Olympic synchronized diving qualifiers. 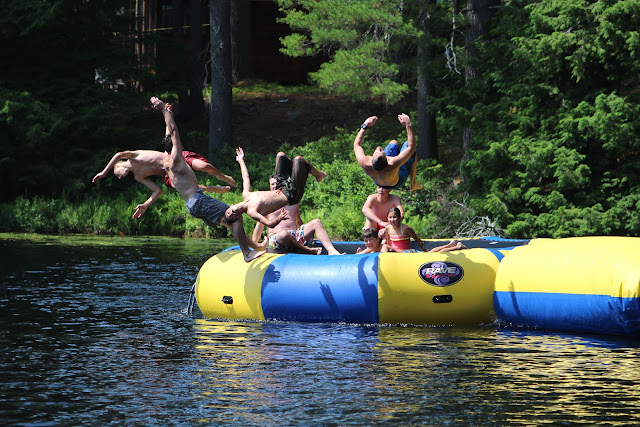 Some were swimming in the middle of the lake using pontoon boats as staging areas. 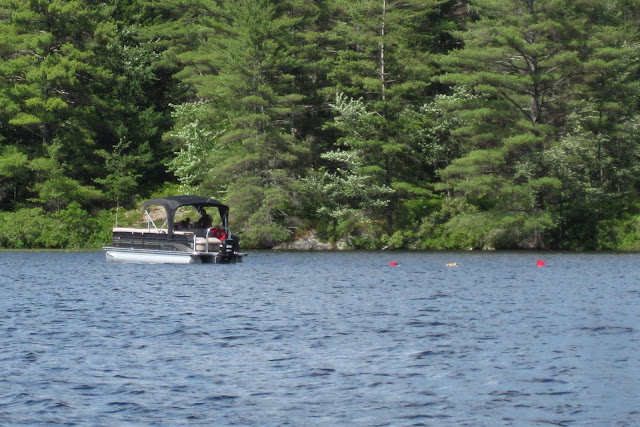 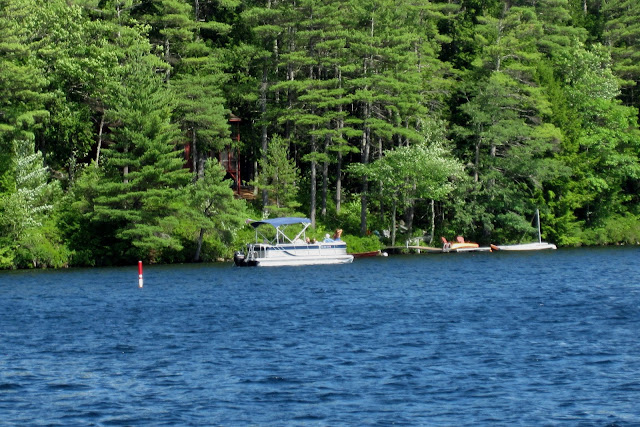 And there were skiers and boarders, with their sport made more challenging by the wind.

All were sharing the lake, and no matter what they were doing, everyone seemed to enjoy the weekend.  Now the loons just need to learn how to share.  Even if they haven't figured that out yet, they can at least enjoy the occasional quiet moment in this beautiful spot we call Lake Wicwas. 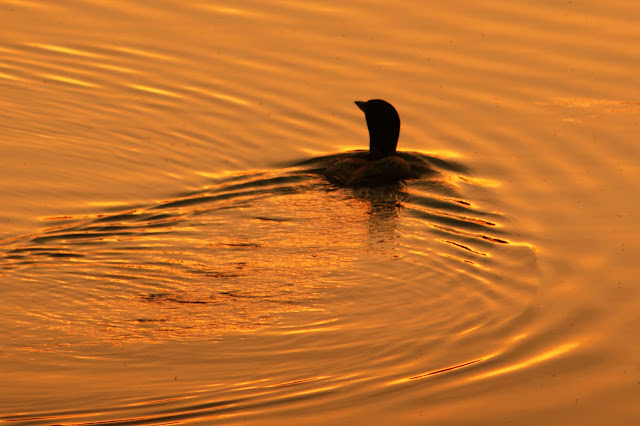 Posted by Scott Powell at 9:23 PM No comments: