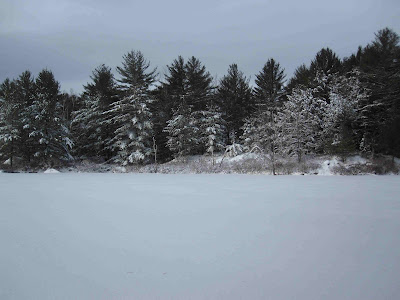 What a difference 24 hours can make.  Yesterday's glassy lake has been turned into a pristine layer of white by last night's storm.  Although it's been winter for quite some time, this is the first time it's really felt like it, with the first measurable snow of this season.  Due to the lack of snow late last winter, it's been over 10 months since we've had snow - not a record, but close.  Lake Wicwas finally looks the way it should in late December. 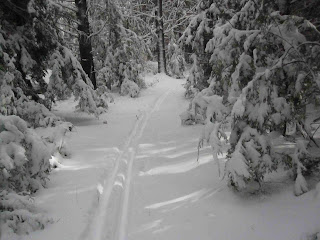 We received 8-10 inches of dry, light powder, though the strong wind made it hard to get an accurate measurement.  It was enough to allow XC skiing on the lake and on the well-graded trails, but not enough to provide cover for rougher terrain.


By noon time there was enough of break in the clouds to have a little sun shine through, but the wind was whipping up the snow into miniature tornadoes that were blowing from north to south down the lake. 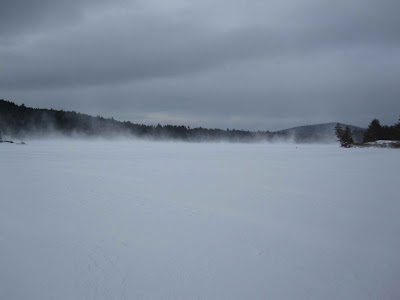 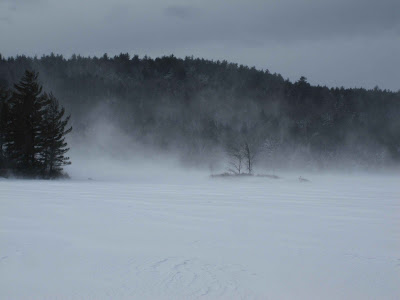 Sometimes the visibility was poor even after the snow had stopped, but it made for interesting patterns on the snow, not unlike what you might see in the desert. 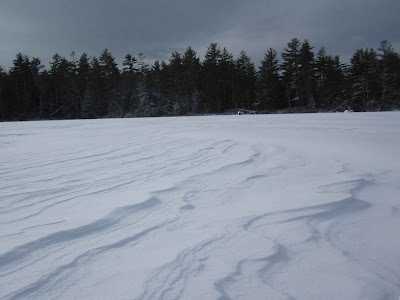 In the hemlock forest, the winds were kept at bay, and the snow stayed in the trees well into the afternoon. 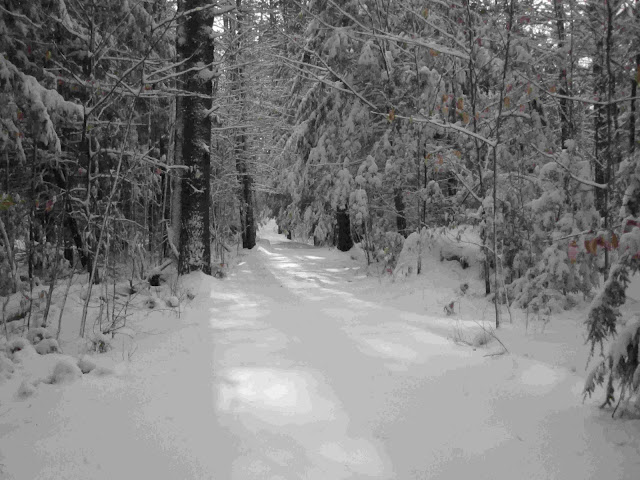 Let's hope this is the start of good winter weather for Lake Wicwas.
Posted by Scott Powell at 8:23 PM No comments:

Another week with seasonable temperatures and no snow, and Lake Wicwas still has fantastic skating.  There were lots of people out today, being a Sunday and the day after Christmas.  There are now tiny air bubbles in the ice, so it doesn't have the clear, black, transparent quality it did last week.  Large white air pockets have also have formed near the surface, but they are strong enough to skate right over.  In some places there are many of these pockets, while in other places there are none at all.  With some sunny days, the surface was perhaps even smoother than last week. With snow forecast for tonight, this will be the end of skating over the entire lake, but with such great ice underneath, it will be worth doing some shoveling. 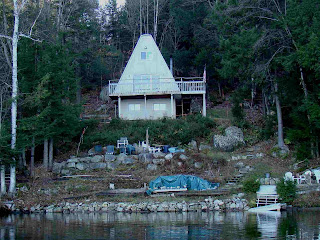 Fall and winter are common times for house construction on all the lakes, or, as this year on Wicwas, de-construction.  There are two projects currently under way, both replacing older, classic homes from a generation ago.  The A-frame on the very southern part of the lake (picture from this summer) disapeared a couple of weeks ago and a new home will soon rise in its place. 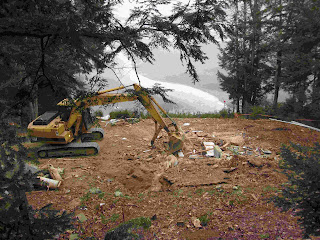 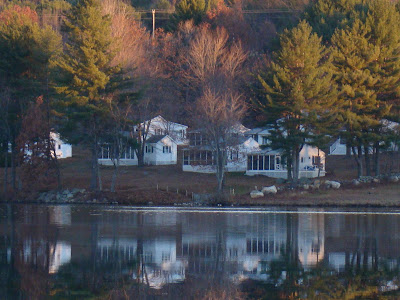 And one of the cottages on the opposite end of the lake - the north end - likewise has disappeared, and a new foundation has sprouted, waiting for a structure to appear on top. 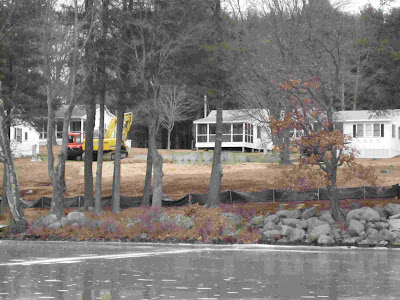 At least these were planned changes.  In the winter of 2007-2008, in a true tragedy, a cottage on the north side of the lake collapsed under the record snow fall that winter.

It will be interesting to watch and see what kind of architectures rise in place of these landmarks from Wicwas's past.
Posted by Scott Powell at 9:18 PM No comments:

With a rare combination of weather events, Lake Wicwas right now has the best skating I have seen in 40 years.  The heavy rain last Sunday and Monday fell on top of the recently frozen, smooth lake, creating an inch or two of standing water on the surface.  Then with cold weather all week, the water froze with a beautifully smooth surface.  And with only a dusting of snow - which mostly blew off, leaving only a few paper thin patches of snow - the entire lake is a sheet of spectacular black ice, about 6 and half inches thick. 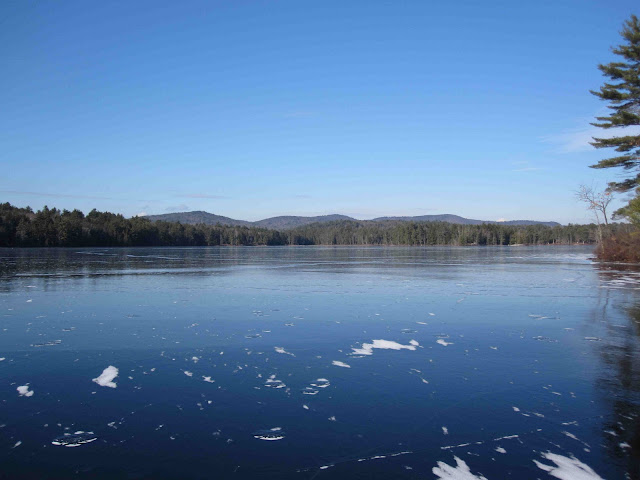 The rounded white shapes in the ice are thin layers of air captured at the interface between the original layer of ice and the new layer formed by the rain.


It was quite eerie skating, as the ice was constantly cracking, making long, echoing sounds reverberating across the lake, occurring much more frequently than the cracks that happen later in the winter.  A couple of times a crack went right underneath us; we could see it form, watching the leading edge move through the ice.  Most of the cracks seemed to be occurring in the top two-inch layer.

We saw no animals other than other humans, but there were lots of fox and squirrel tracks in the snow near the shore. 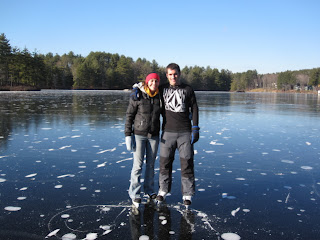 With warm tempertures, no wind, full sunshine, and a clear blue sky, it was perhaps a once in lifetime experience.  (Special thanks to Tom for the ice report!) 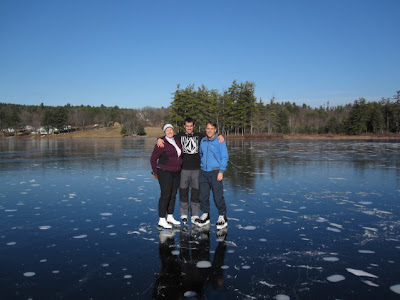 Posted by Scott Powell at 8:39 PM No comments:

With just a dusting of snow Friday night, Lake Wicwas instantly transformed into its winter colors.  Sadly, with warm weather and rain on Sunday, it didn't last long. 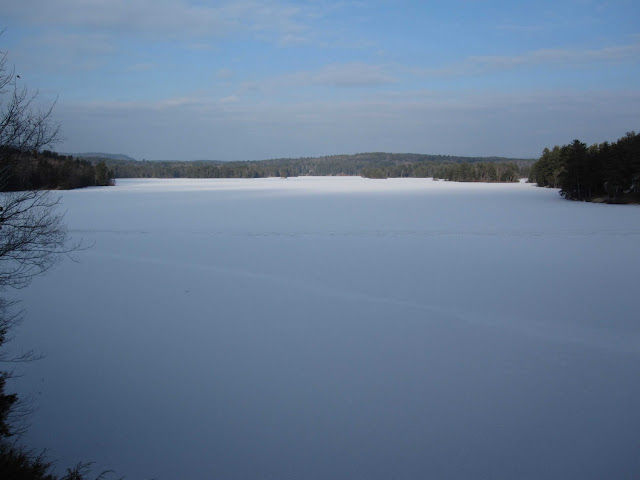 But Saturday was a beautiful day.  Linda and I spent a long time watching a pileated woodpecker working on a dead birch tree, hacking out wood chips, and circulating around and up and down the trunk.  Nearby I found the results of it seeking an insect nest in its favorite tree, the white pine. 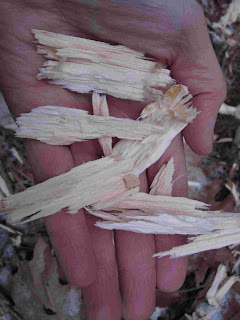 A large pile of fresh wood chips, some as large as four inches long, are trademarks of the pileated.


I didn't get any pictures of the bird today, but here's one from last fall, investigating a stump right in our front yard.


On Saturday I took a long trip on the Arbutus Hill trail again, but even with the snow I saw no signs of wildlife.  I did find a very nice outlook near the summit of Arbutus Hill, looking east towards the Corliss Hill, with the Wicwas Lodge (Lakeland School) clearly visible.  Then, on the way home, right on Chemung Road where it passes between the lake and the swamp, an owl flew out of a tree right over me.  It flew low along the road with slow, silent wing beats until it arced to the right over the swamp towards lake Winnisquam.

Posted by Scott Powell at 3:42 PM No comments:

The ice came in to Lake Wicwas this week, right on schedule, and rather quickly.  The intersection of water and freezing temperatures may not feel very welcoming, but it certainly produces some amazing features for us to enjoy.

Monday morning the ice was spreading out from the shore until the wind came up and blew it back considerably. 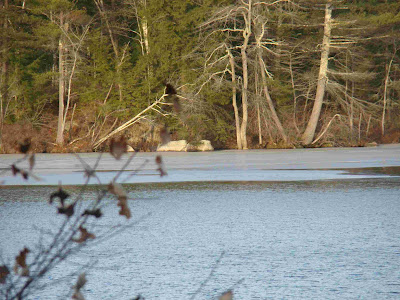 But then with cold nights and days below freezing, by Thursday the lake was frozen over, and by Friday the ice was over 2 inches thick where I measured it.

The results of the cold temperatures and strong winds are still evident by the ice coated rocks along the downwind shores of the lake. 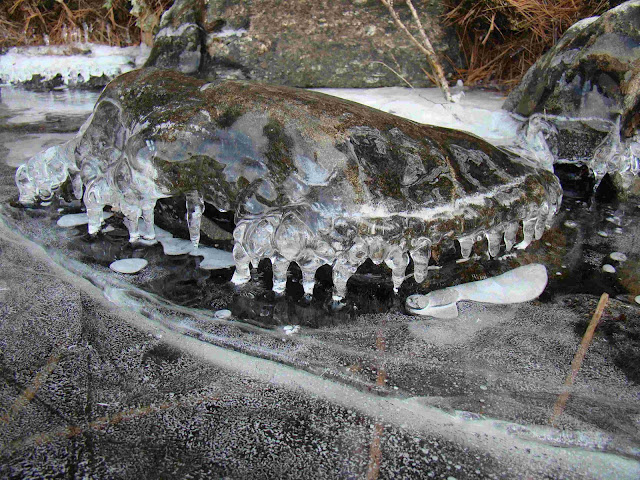 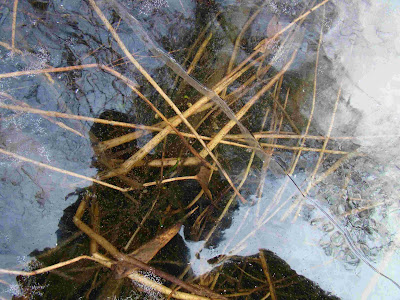 The rapid ice formation created very clear black ice that provides a unique view of the lake bottom, showing the leaves and reeds from summer locked at the bottom of the lake for the winter.


When very cold weather follows soon after wet weather, the ground is still wet, allowing ice crystals to grow up out of the soil - usually sandy soil - like mushrooms growing out of the ground.  They often grow up underneath stones which conduct the cold into the ground (technically, heat is conducted out of the ground), freezing the water in soil beneath them, which expands, pushing the stones right up into the air.  The first two pictures were taken today on the yellow trail in the Hamlin area, and the others area from an earlier freeze on the edge of a dirt road. 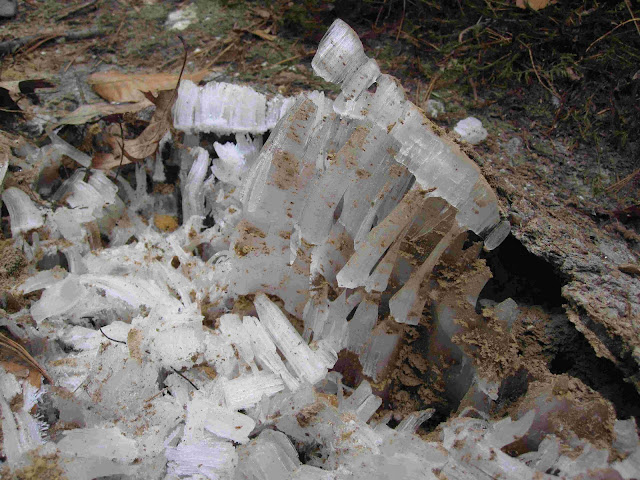 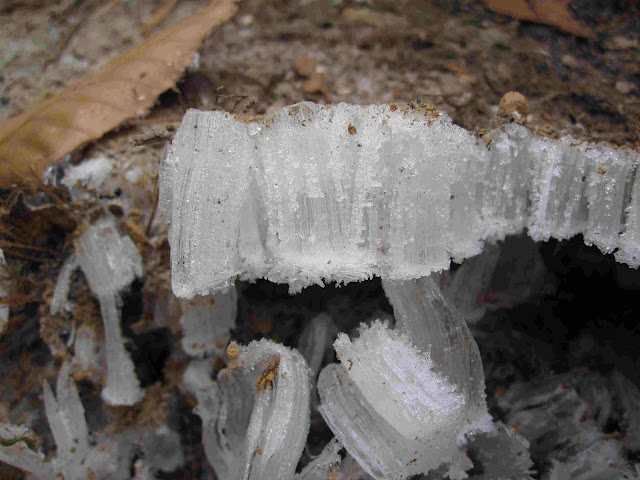 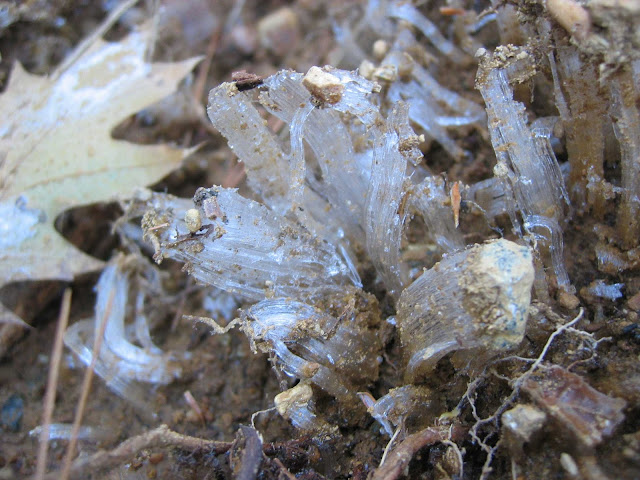 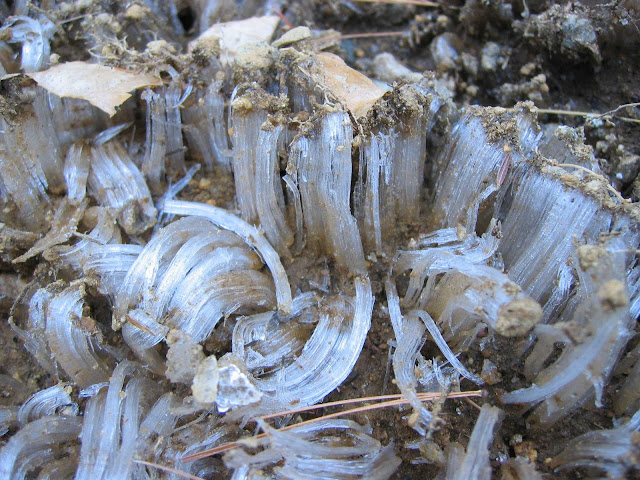 The streams in the Hamlin area are still flowing rapidly from the recent rains, and they also are forming interesting ice formations.  This frozen water fall is right at the bridge by the trail head. 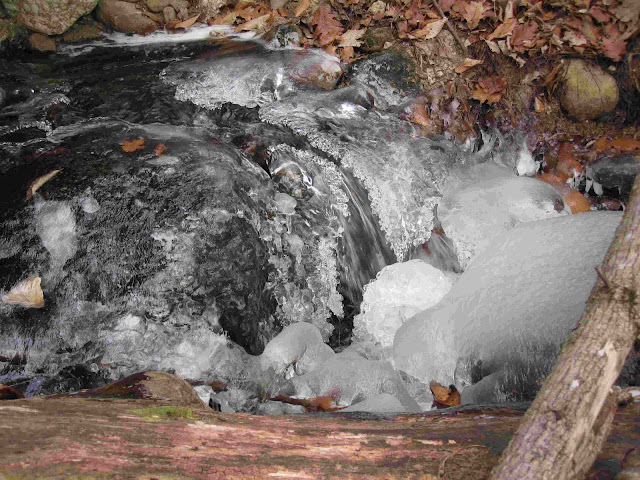 Email ThisBlogThis!Share to TwitterShare to FacebookShare to Pinterest
Labels: Ice In

Although the official start of winter occurs on December 22nd this year, the meteorological winter started on December 1st at Lake Wicwas (as well as the rest of New England), so I thought it was ok to borrow those lines from the Mamas and the Papas.  NOAA defines the start of meteorological winter as the date when winter weather starts in an area, so it changes from area to area.  And winter did start in early December, with snow in the mountains, but no snow or bitter cold at Wicwas yet.  In fact there are still only skims of ice in the most protected coves.
I did go for a walk on this winter day in the Barbara R. Smyth Conservation Easement and discovered a new new loop has been established.  It is a long loop that goes up over Arbutus hill; it's still a little rough, but easily passable and well marked (also with magenta blazes).  Near a wet spot on the trail I found these signs of deer, though they are not particularly recent.  The first shows where a deer was scraping off the bark of a hemlock tree with its lower incisors to eat the bark.  The second shows where a buck was rubbing its antlers on a tree as part of marking its territory.  It is identified by its braod and smooth abrasion, rather than the narrow scrape of teeth.  I almost always find this on hemlock trees as well, as the aromatic properties aids in the scenting of its mark.  Although I have yet to see a buck with antlers, this is a sign they are around (as well as all the baby deers that were spawned this spring....)


We haven't seen any migrating birds this fall - until now.  There was a large flock of Common Mergansers on Lake Wicwas this week;  we counted at least 23.  They spent quite some time diving in the cove, and there was a lot of excitement in the flock when when one came up with a fish and the others all went after it.  The owner of the fish would swim away from the others, frequently dropping the fish and then grabbing it again. 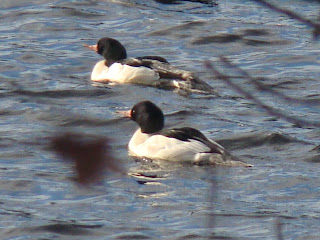 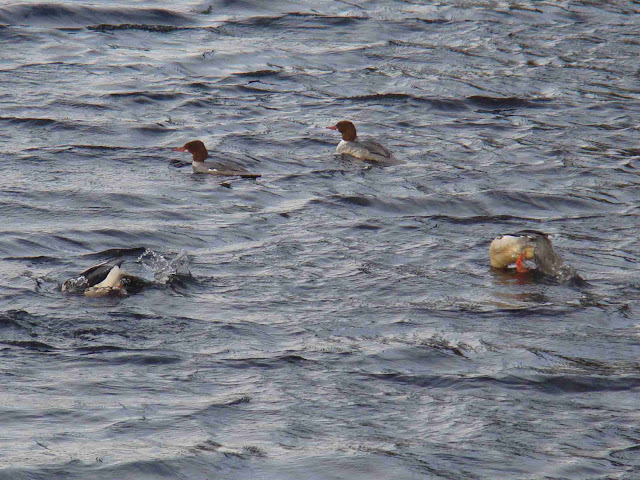 There was also one pair of Hooded Mergansers, of which the male is particularly distinguished.  This pair did not mingle with the flock of Commons, although they didn't seem to mind each other when they came in close proximity. 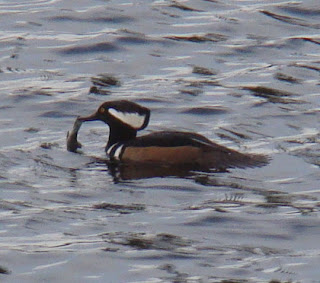 He was clearly successful in his fishing endeavors. 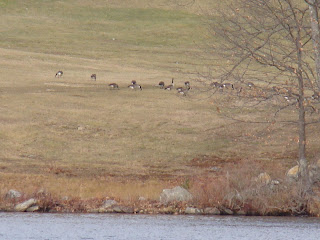 The coldest night of this early winter season is predicted for tonight:
Posted by Scott Powell at 10:40 PM No comments: