Walking along a trail's edge this week I noticed some bright white fungus (I thought) growing on the underside of several branches of an alder tree. 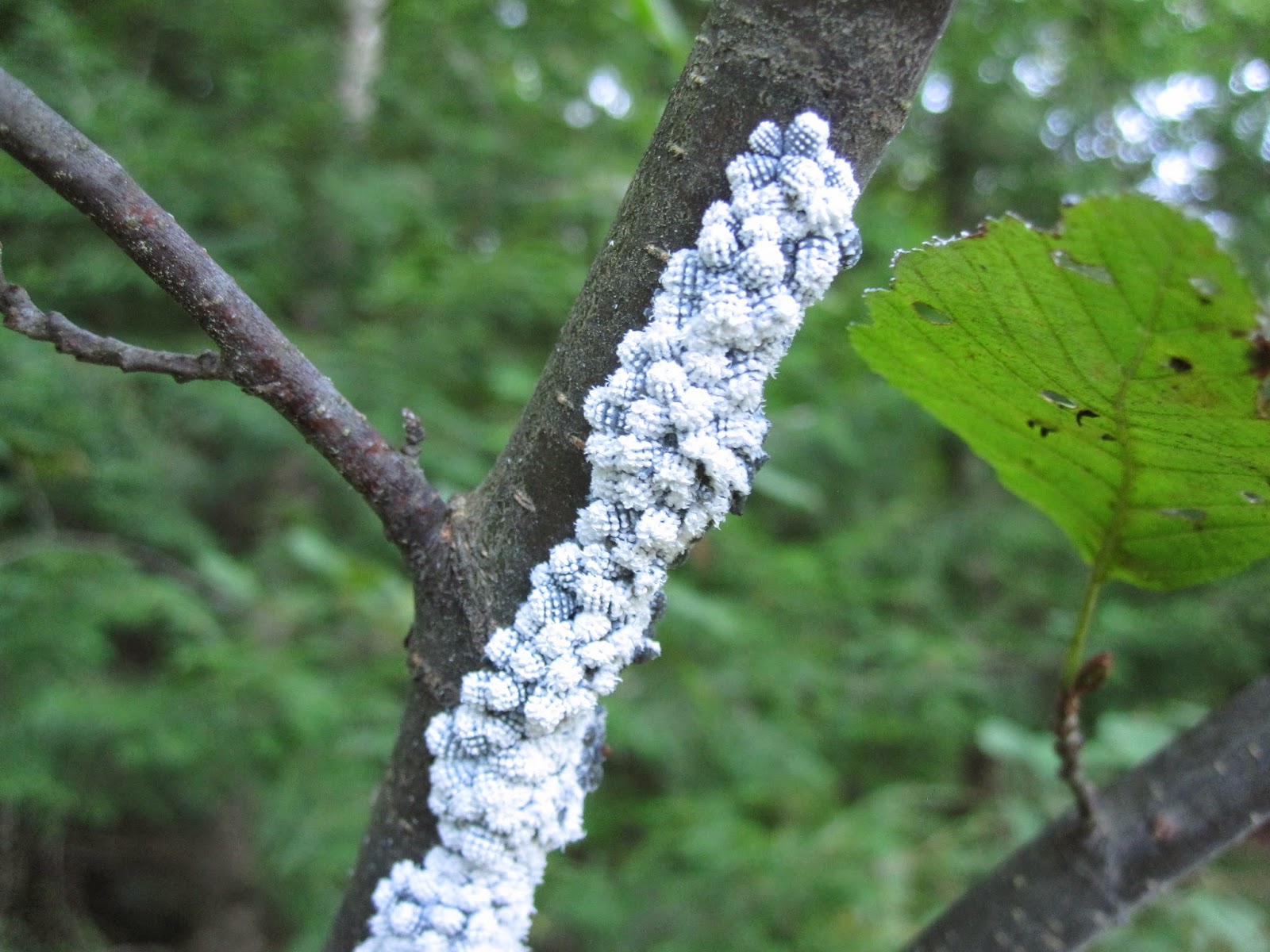 I zoomed in to get a close picture too help identify what kind of fungus it was.  It is quite interesting with blossom-like forms and curly filaments. 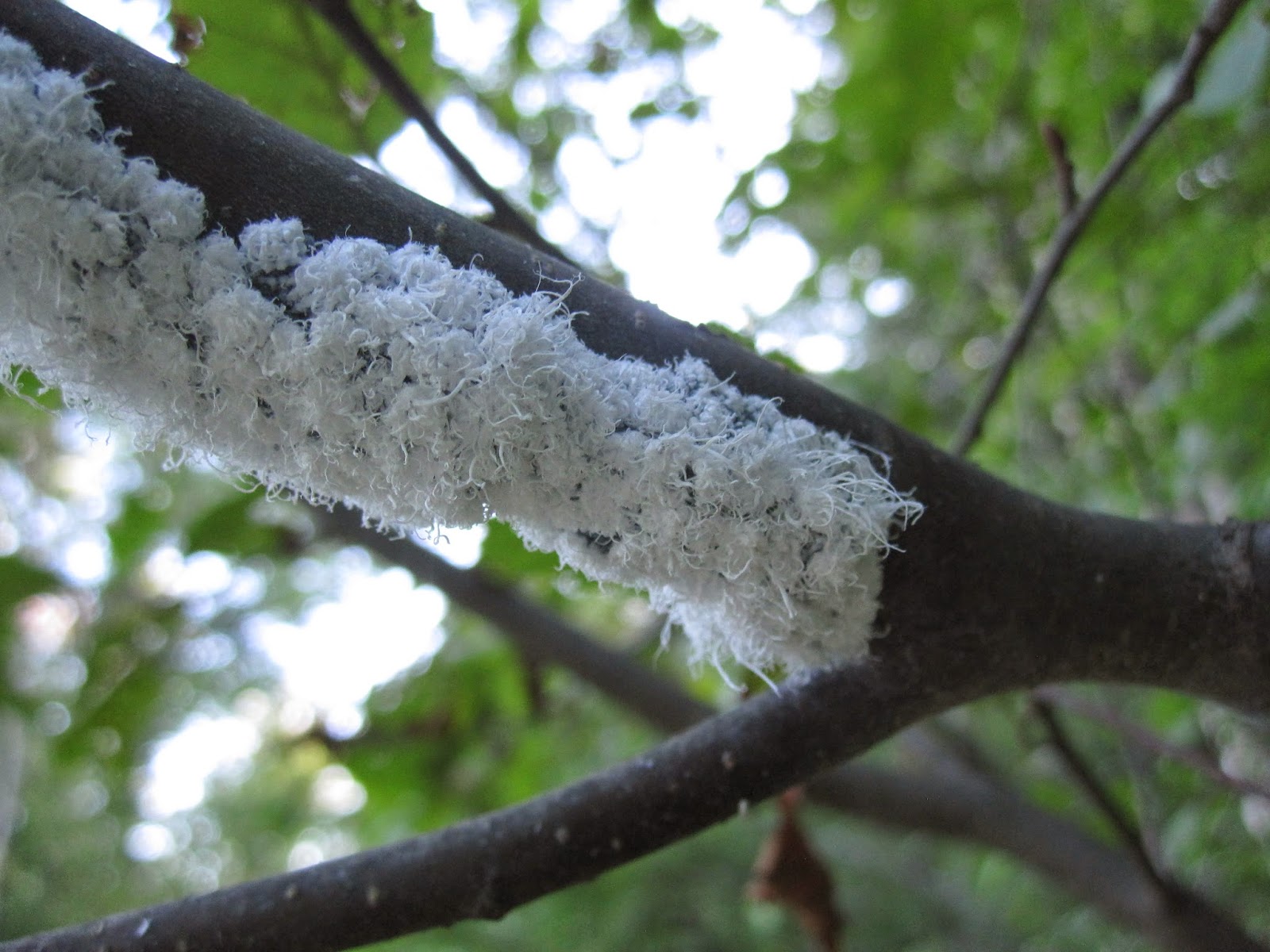 When I started my research into fungus I quickly got the message that it's not fungus at all, but rather an insect!  Not ready to believe it, I went back to the tree to investigate further.  Scraping a bit off the tree and onto my hand (quite easily - it came right off) I realized that in fact, that's what it is.  It is a colony of Woolly Alder Aphids.  There were large adult aphids

and much smaller aphids that must have just recently been born.

I learned a lot about aphids in the process, and these are not all that different from the aphids that live on our house plants, except for their defense mechanism.  This aphid grows a waxy substance on its back that discourages predators from eating it, as predators don't like the fluffy stuff on them.

In the summer when food is plentiful - consisting almost exclusively of the sap of alder trees - they bear many, many live young asexually.  Only as winter approaches do the females need a male to lay eggs to winter over.  As they mature, some will grow wings so they can fly.  In the spring they feed on maples which have more nutritious sap early in the year, later flying to alders with their protective white cottonballs attached.  I believe this time of year they will be flying back to maple trees to lay their eggs.  I'm going to keep my eye open for that sight!  Here's another interesting item:  these aphids are also protected by ants (sure enough, there were ants crawling all up and down the tree) and in return, the aphid will release a drop of tree sap when an ant strokes the aphid with its antenna.  You just can't make this stuff up!  You can read about this and more on a good short summary of Woolly Alder Aphids I found on the Brevard College website:  (Click Here)

Enjoying the early colors of fall one morning at the edge of the lake I was suddenly startled with a large splash as a loon popped up out of the water right in front of me. 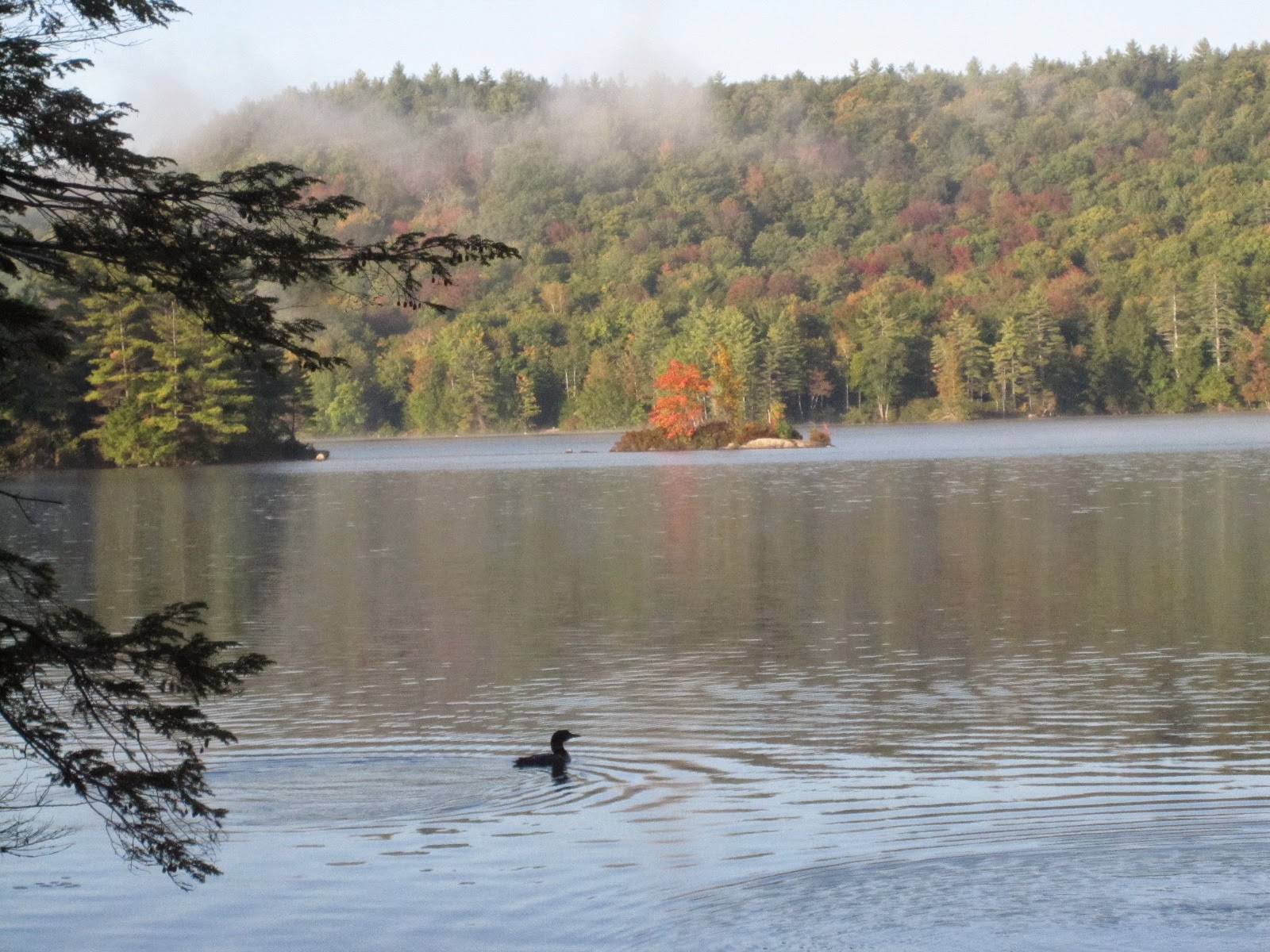 He was as startled as I was, as it saw me, and swam away calling with alarm.  I soon found out why, when the young chip popped up too. 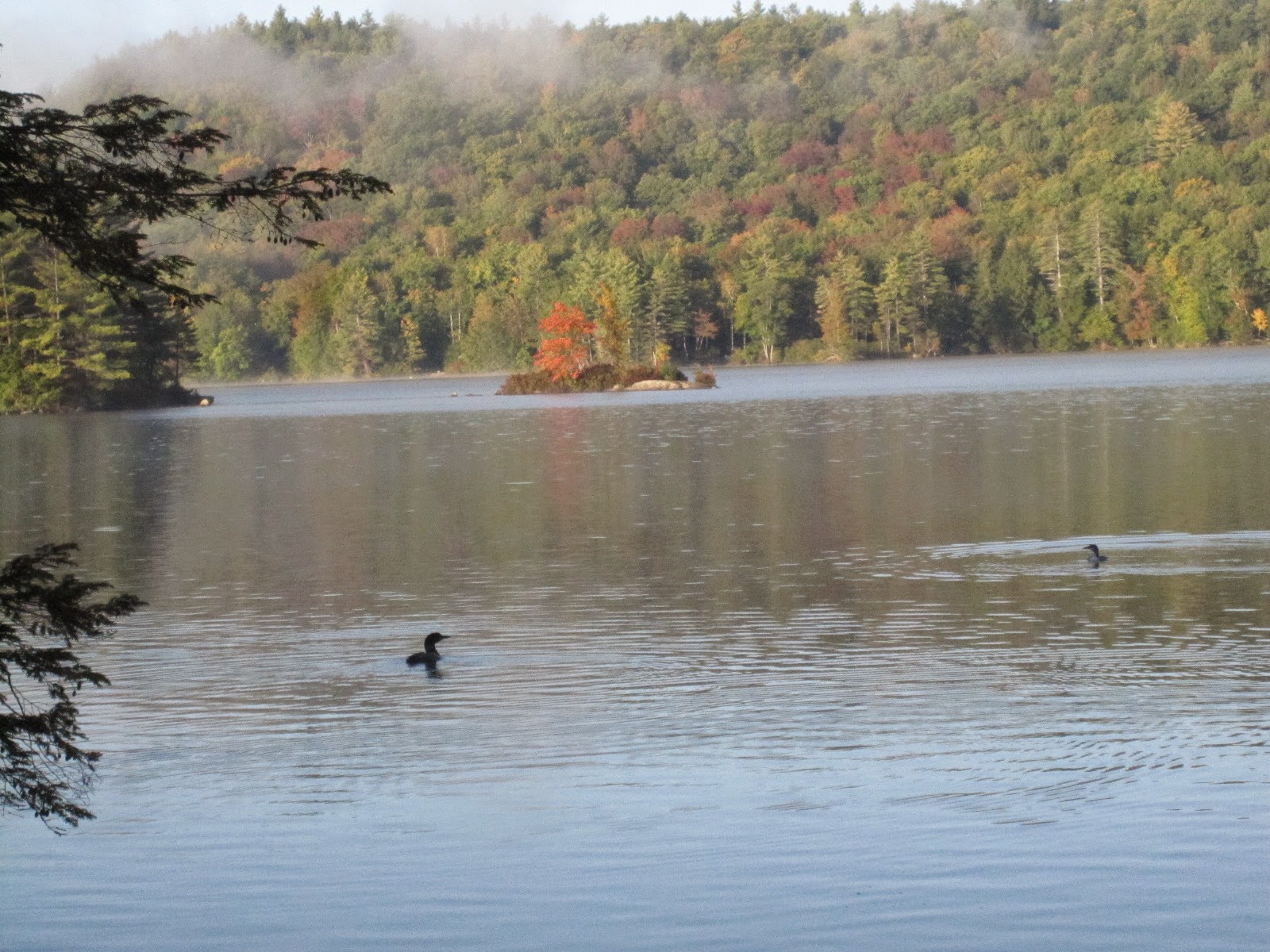 Dad called him over and they calmly swam away from the intrusion into their quite morning.

Remember the tiny snake from last week?  This week I came across what I expect is one of its siblings.  In the same general area another Brown Snake was slithering around - odds are it wasn't the exact same one, but there probably weren't two litters born that close together.  At any rate, it had grown a lot in just a week;  plenty for snakes to eat this time of year as well.
A late addendum - on Sunday, in the middle of the unusually warm, 75 degree sunny afternoon, we saw a Great Blue Heron standing in a most unusual pose in the middle of a west-facing clearing about 20 yards from shore.  It had its wings spread out in a v-shape, and looked like a rocket on a launch pad ready for take off.  It reminded me of the way the cormorants sit on the rocks and spread their wings out.  The best theories I found is that heron do this to dry their wings, not for temperature regulation.  I did not get picture, but I found one on the web that shows exactly what our bird was doing - you can see it HERE.  (And you really should see it!)

I hope wherever you were you were able to get out and enjoy the fabulous weather this weekend - our new loon did! 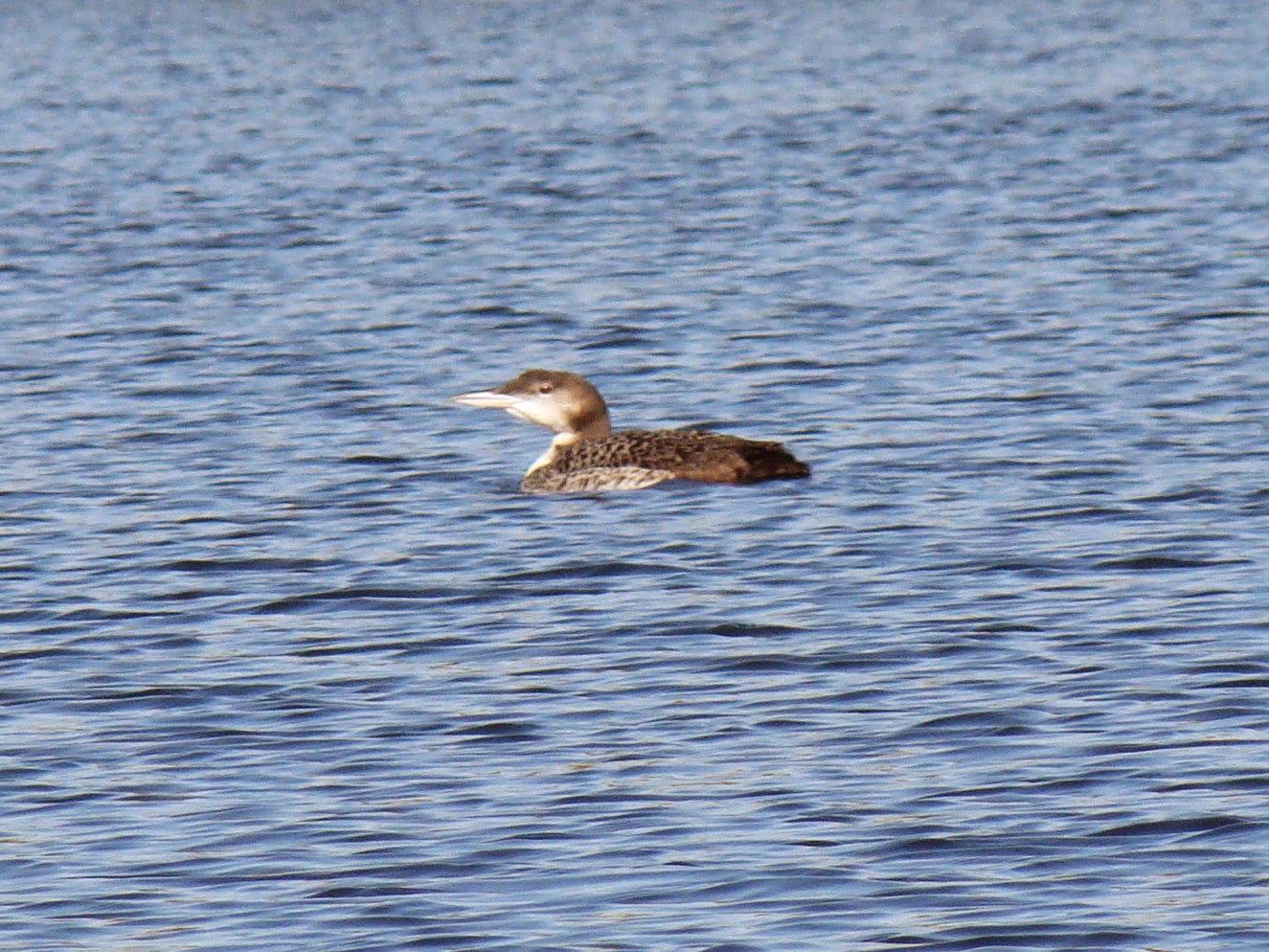 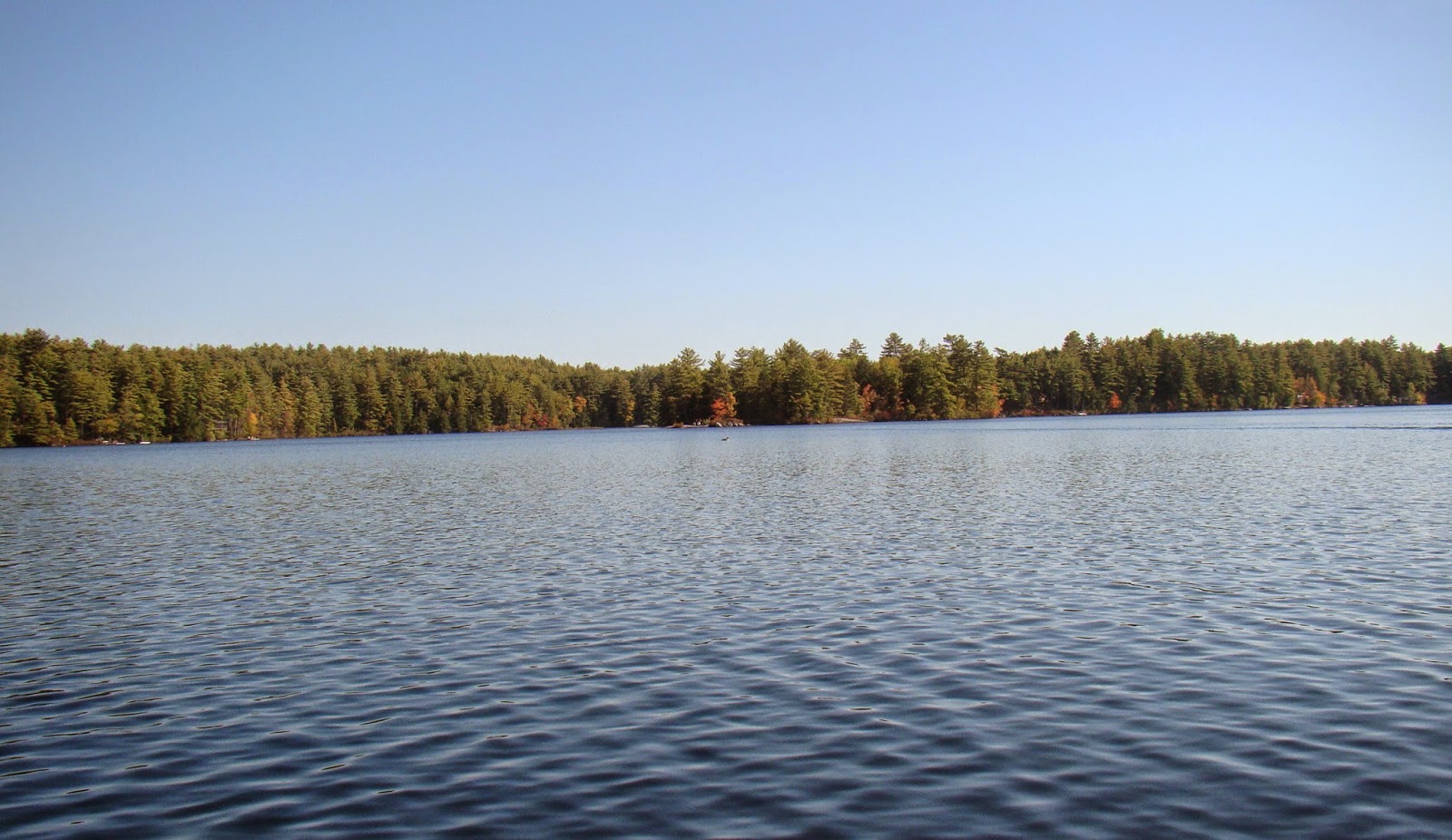 Posted by Scott Powell at 11:03 PM No comments:

Fair warning to those of you who are not enamored with insects - this week I had a double feature.  I saw two insects - a spider and a grub - interacting with each other, although one was doing a lot more interacting than the other.  If you follow this blog, you know that spiders (which are actually arachnids, not insects) are carnivorous predators, so you have probably guessed that the spider had the upper hand in the relationship.  In fact, the spider, a medium sized dock spider, was in the process of consuming the grub. 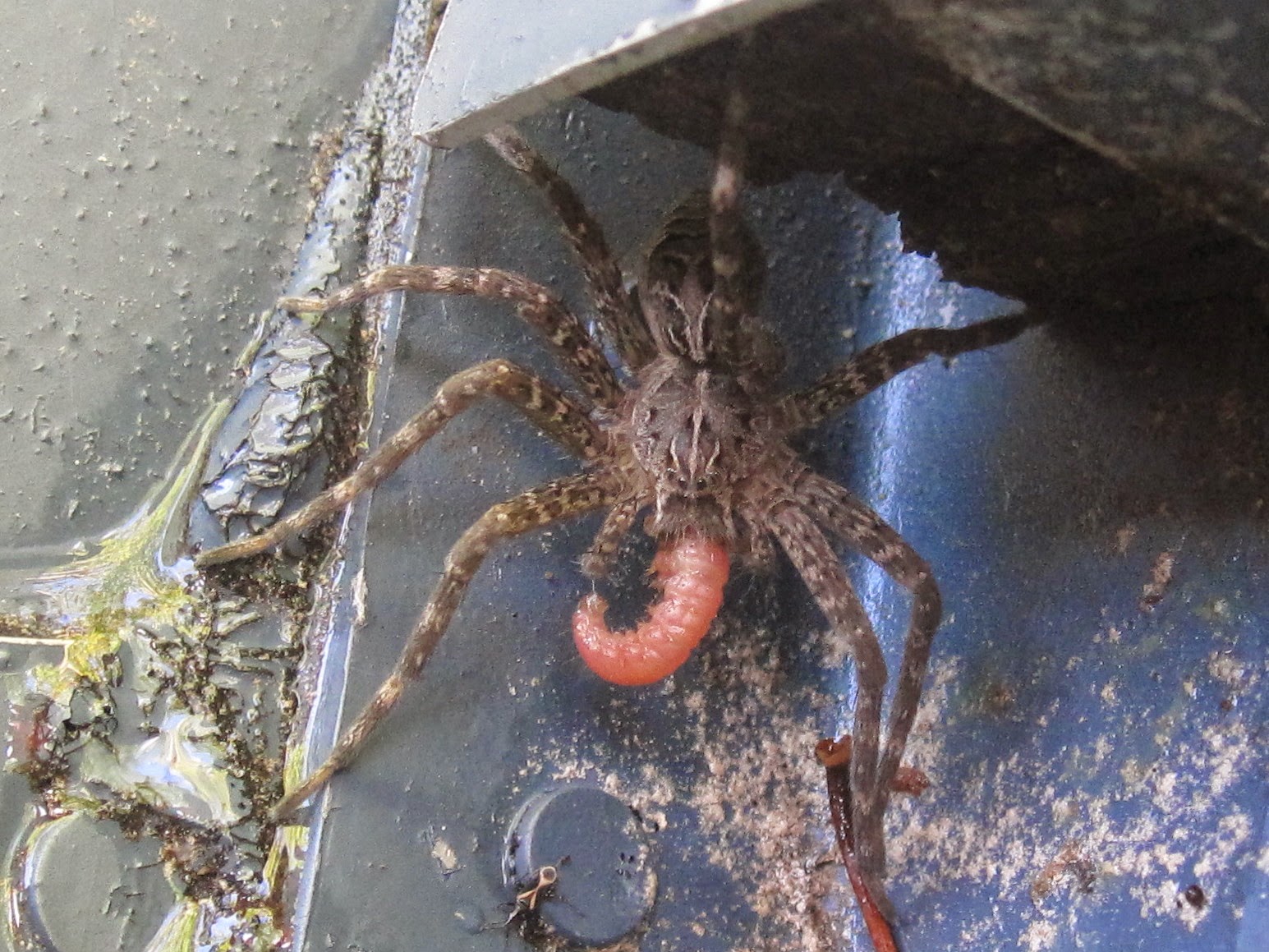 The grub was still alive, squirming in a futile effort to escape.

Later the same day a large flock of warblers flew through the area;  they were picking similar larvae off the leaves of trees as they went.  The whole flock was present for only a minute or two, flying on after clearing out the immediate area.

I saw another tiny creature that must have hatched out just recently - a Brown Snake.

Although very small, it was rather quick, but it settled down in my hand to pose for a picture to show the size of it. 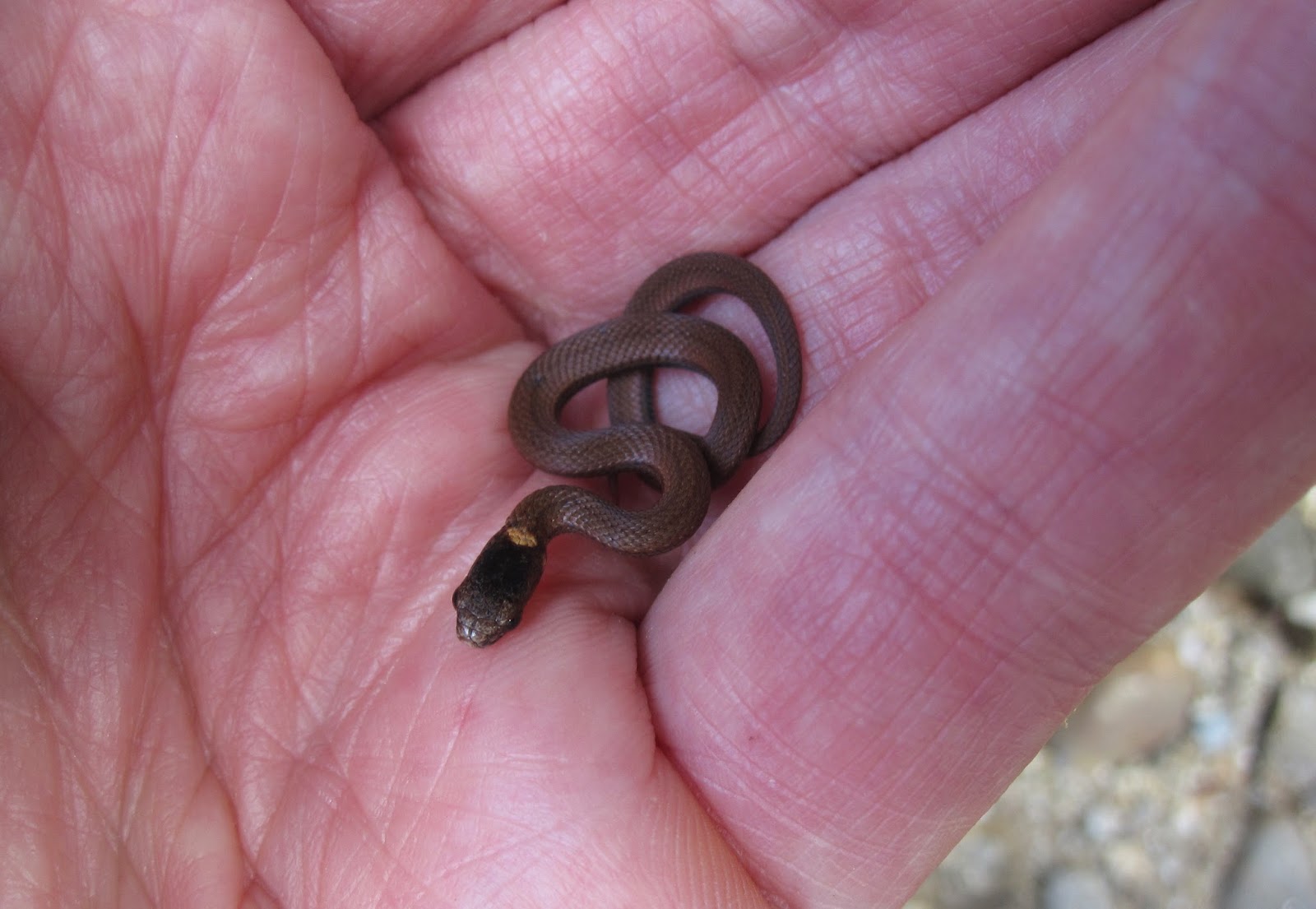 This species of snake bears its young live;  this one may have only been a few days old.  I found it creeping in the vicinity of the late-blooming Nodding Ladies' Tresses which I always enjoy finding this time of year. 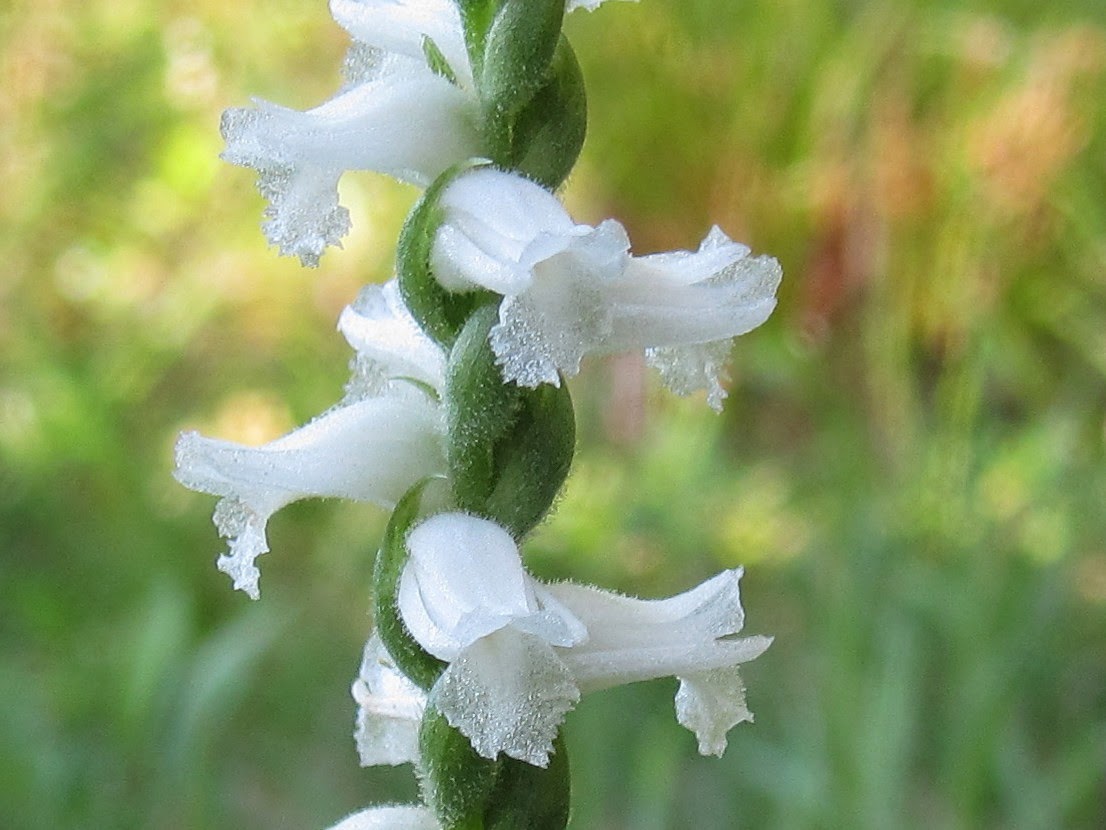 The lake was very quite on Sunday when I went for a kayak;  I saw more ducks than humans, although there were people out on the islands enjoying the warm day before the showers came through.

I also more signs of the leaves starting to turn.

And as the sun arcs lower in the sky and sets farther south, the evening light shines its orange colors on different shores around the lake, now painting houses on the north shore a beautiful color at sunset.

Lake Wicwas was on the cover of Saturday's Laconia Daily Sun!  Well, not the body of water, but the steamboat "Wicwas", built and skippered by our very own Dave Thorpe. 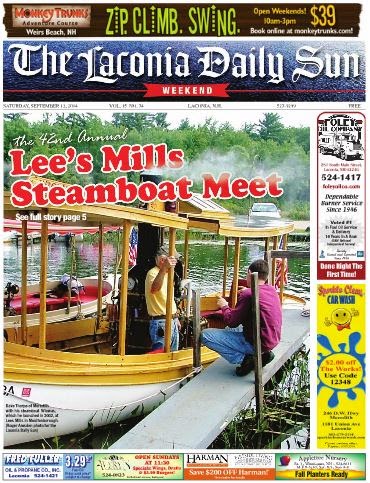 There is a nice article about the Lee's Mills Steamboat Meet, the oldest such meet in the country.  If you missed it you can find it on line at http://www.laconiadailysun.com.

Some parts of New Hampshire were treated to a rare atmospheric phenomenon on Friday night, the Aurora Borealis, or Northern Lights.  I looked for it, but either it wasn't visible from our area, or I didn't have a low enough view of the northern horizon.  But many people in the White Mountain region saw it and posted photographs.  Here is a picture taken at Chocorua Lake by Ron Phillips Photography. 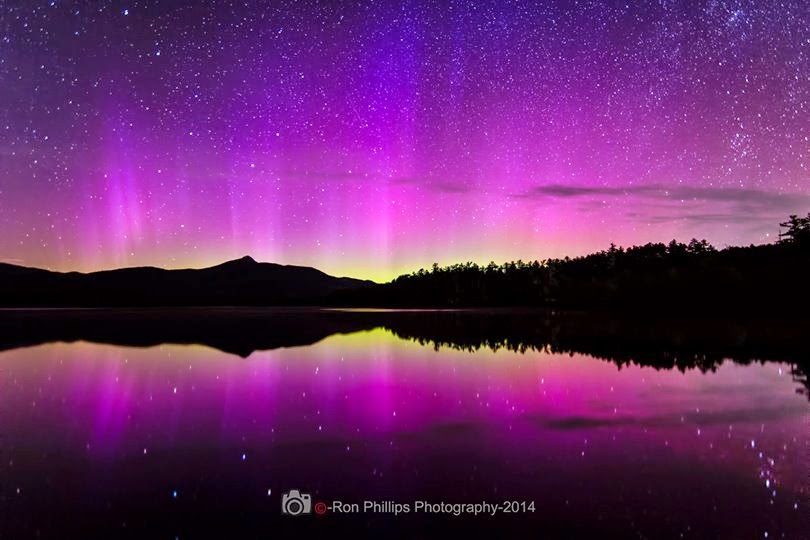 You can see more of his photography at https://www.facebook.com/RonPhillipsPhotography/photos_stream.  Auroras are caused when ions that constantly flow from the sun in the solar wind are trapped by the earth's magnetic field.  When these ions collide with molecules in the upper atmosphere, the molecules are momentarily excited, and then release the energy as light.  There was a solar flare earlier in the week which provided a large flux of ions, making the aurora visible in lower latitudes than usual.

Aurora are most prevalent around the spring and fall equinox, which is just a few days away.  Other sights of the equinox are more visible around the lakes region.  Tiny bits of color are starting to appear on the hills around the lakes, and in the marshes. 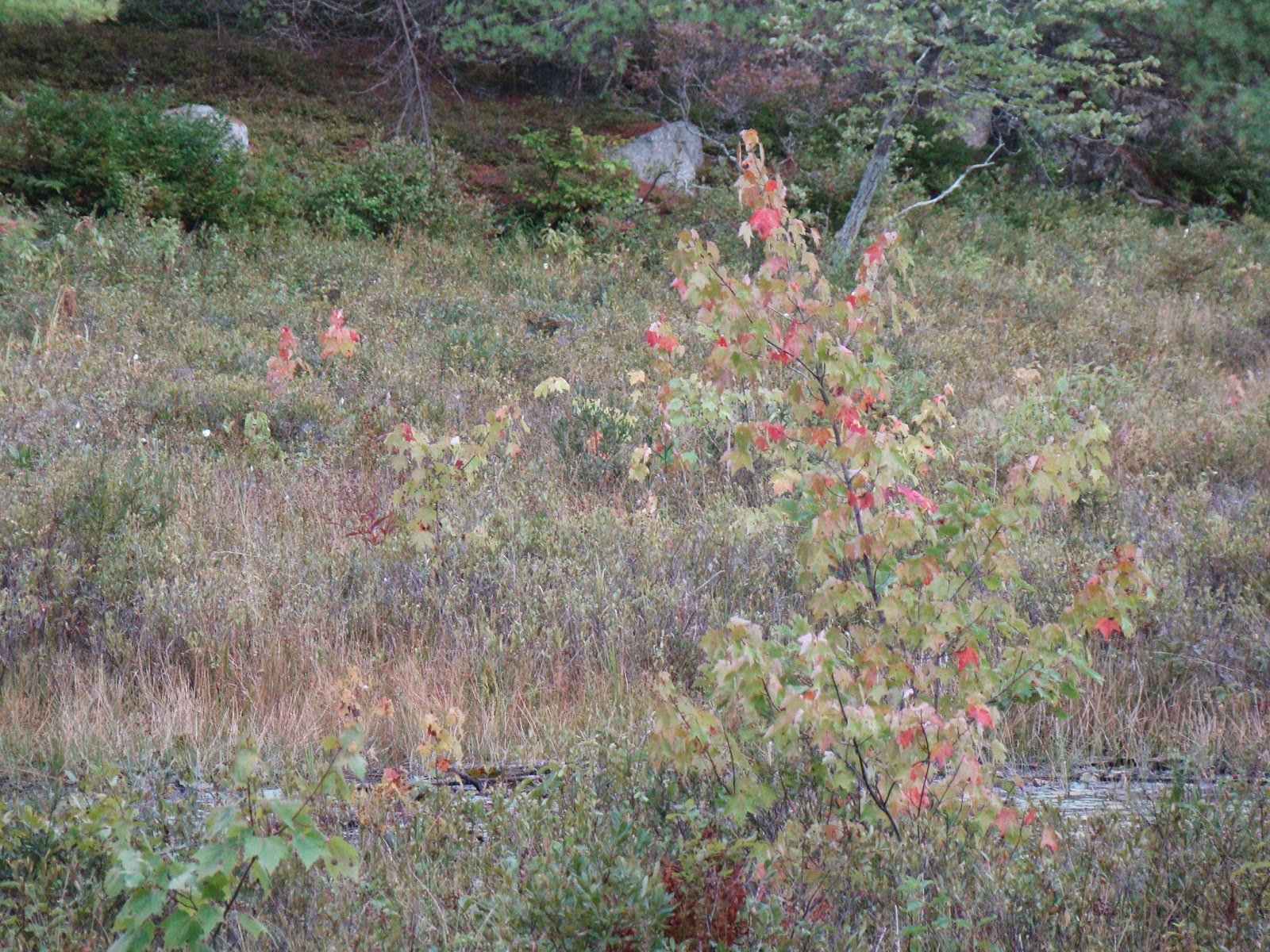 It will be a couple of more weeks before the foliage really starts to turn though. 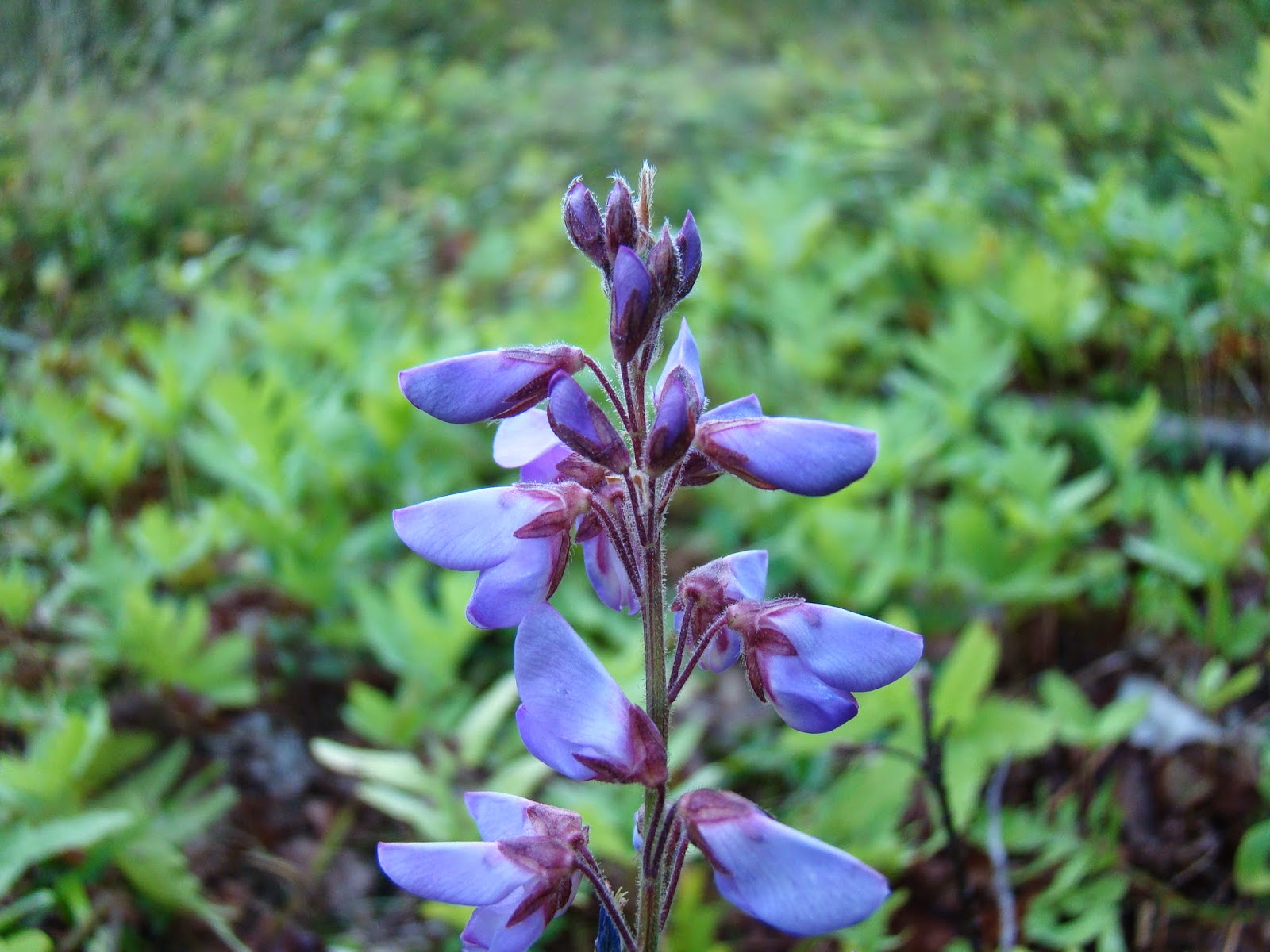 This plant looks a little like a lupine, and both are members of the legume family.  It is also a host plant to butterflies.  I expect the "trefoil" part of the name comes from the triplet leaves. 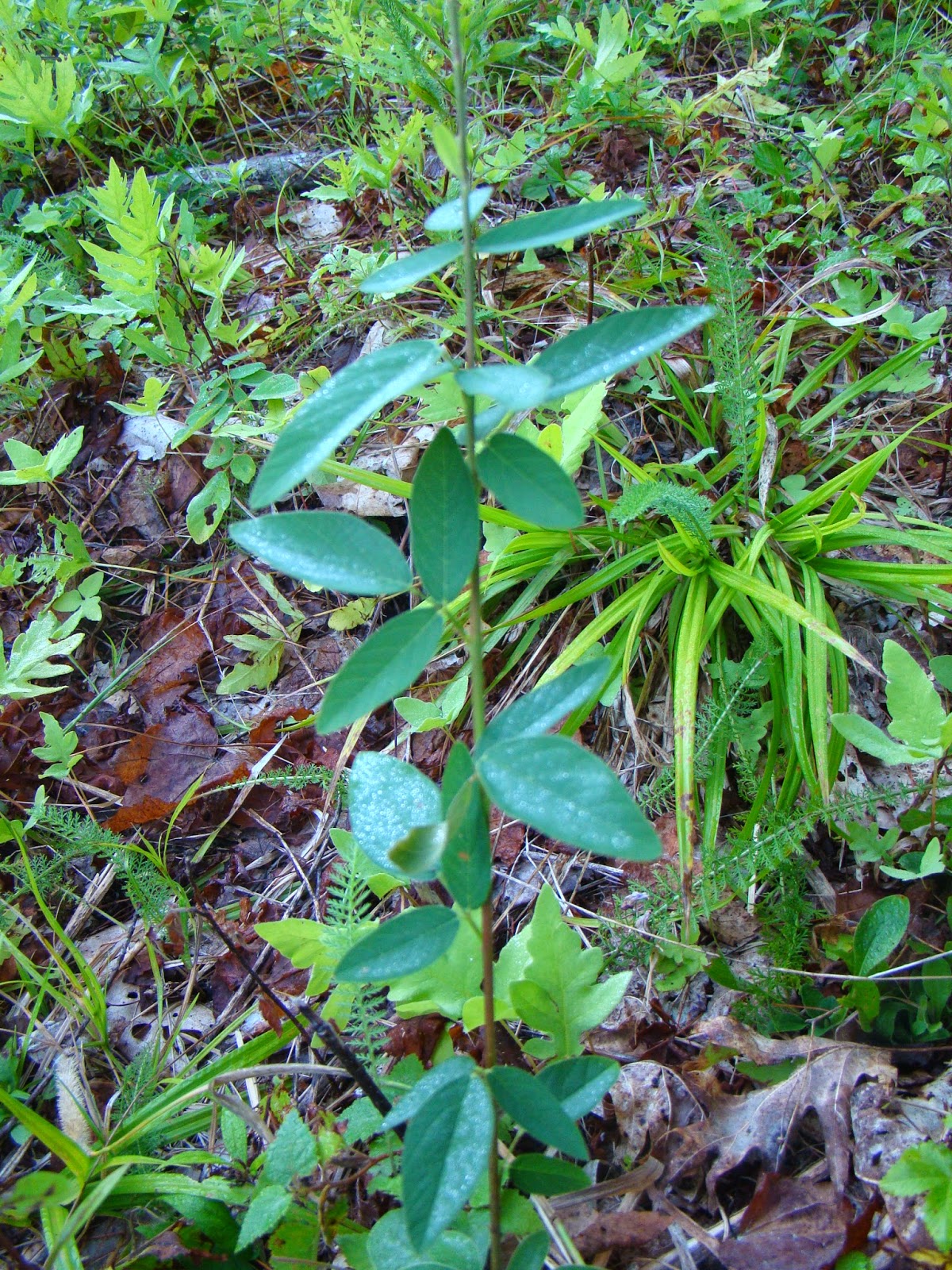 A couple of cold nights are in store for this week - the water will be cooling off quickly now. 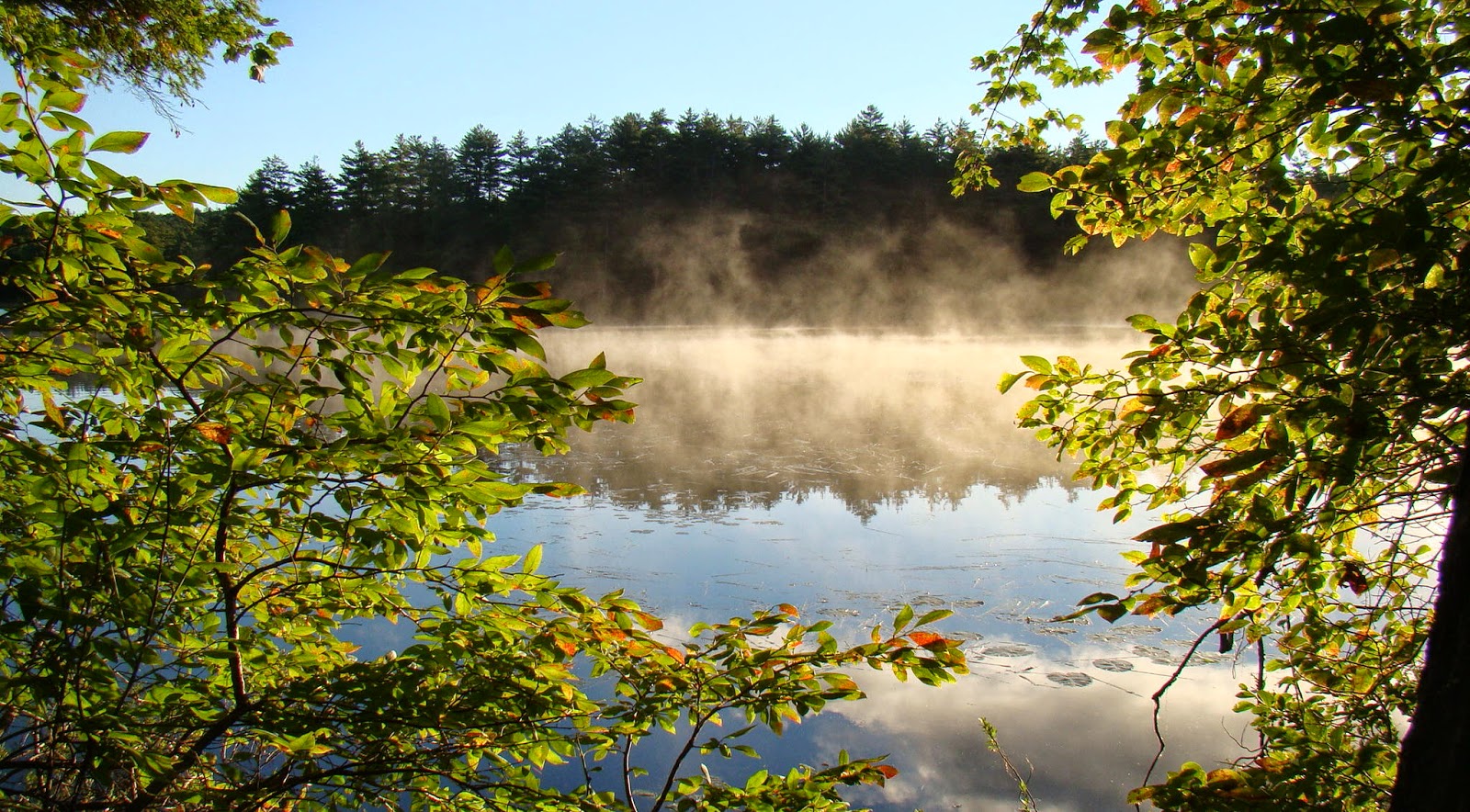 Posted by Scott Powell at 9:35 PM No comments:

All the hot, humid weather this past week made it feel like the dog days of summer rather than early September.  It must have felt that way to the Lake Wicwas creatures as well, as this extraordinary member of the cicada family emerged.

This crazy looking insect is none other than a Dogday Harvestfly - appropriate for this time of year!  They make a loud buzzing sound, kind of like a power saw;  you've probably heard them on hot summer day.  Although a cicada, this is not one that lies dormant for many years;  this species hatches out after just one winter in hibernation.  (It is also called a Dog-day Cicada.)
The humid weather has also been appreciated by amphibians, as there have been many frogs, toads, and salamanders out during the humid days, including this little Pickerel Frog.


On August 17th I noticed a Bull Thistle blooming nearby and have been anticipating goldfinches finding the seeds.  Searching out the plant today, I see that someone has in fact been visiting it.

The lake's young loon is still here, though this picture is a couple of weeks old.

It will likely stay on the lake for several more weeks before flying off to some unknown bay on the Atlantic Ocean.

After the summer blast of HHH weather, it was a relief to have some much cooler, drier weather drive arrive for the past two days.  If it lasts for a stretch of time there may be a change in the animal activity we observe around Lake Wicwas.   Perhaps it will inspire the remaining Osprey to join their clan on the trip to South America - the two that have left are already in Connecticut and Maryland.  But as of last week, there was still at least one Osprey visiting the lake.  I saw one several times including this one rising from the water after a very successful dive.

I wonder if this will be my last Osprey sighting for the year.
Posted by Scott Powell at 10:18 PM No comments: