From death does life spring.  This large dead and decaying stump - probably from a white pine, but perhaps a hemlock - caught my eye due to the amount of new life springing forth from its remains. 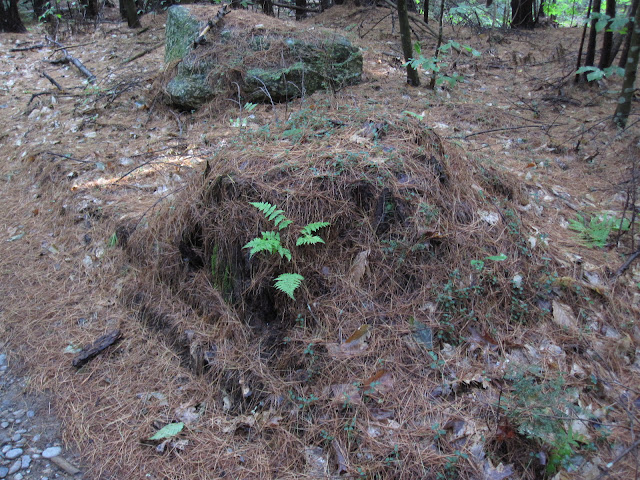 What was once a mighty tree, perhaps 100 or more feet tall, is now only a rounded form of rotting wood.  But the strong heartwood that once supported its mass is now returning the energy it stored over many decades back to new and varied life.  I counted seven different species being incubated there and I'm sure there are many more a better trained eye would recognize.  The obvious ones: 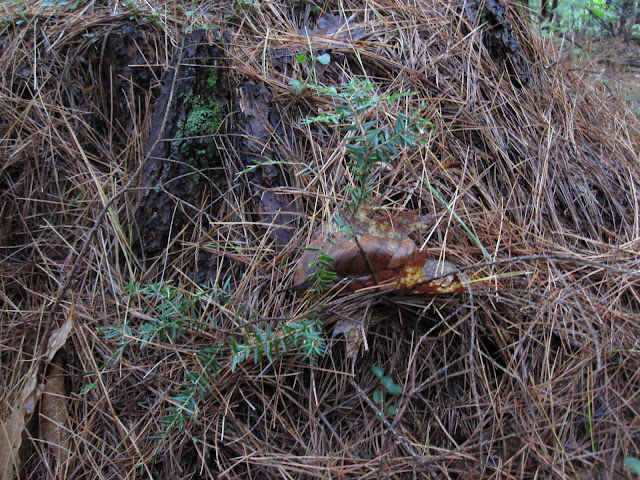 An oak tree (a little chewed by the insects) 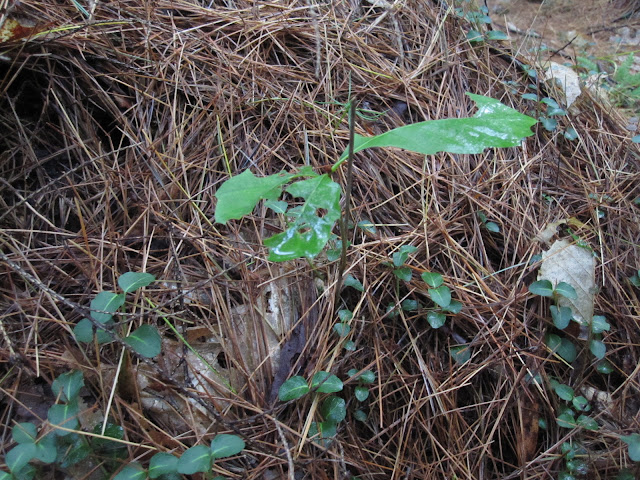 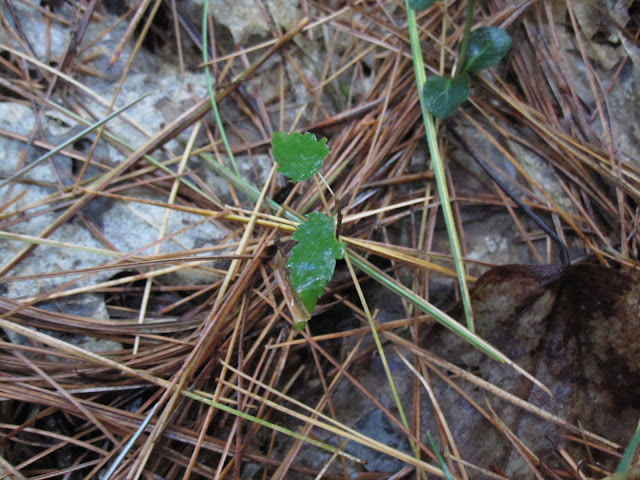 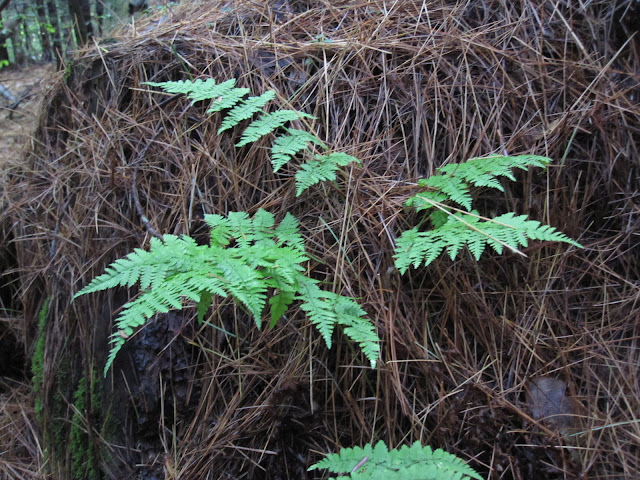 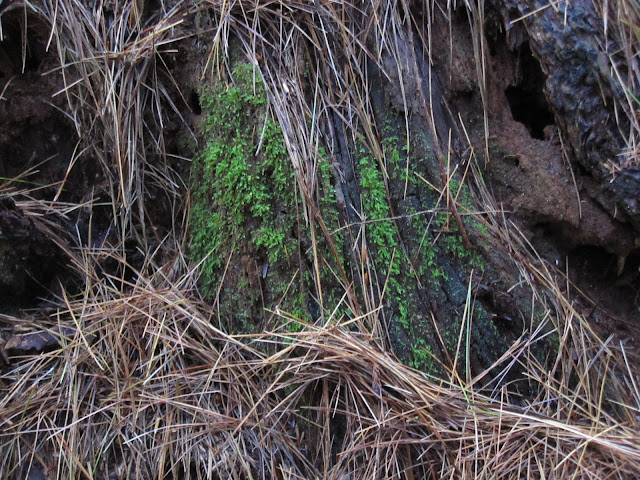 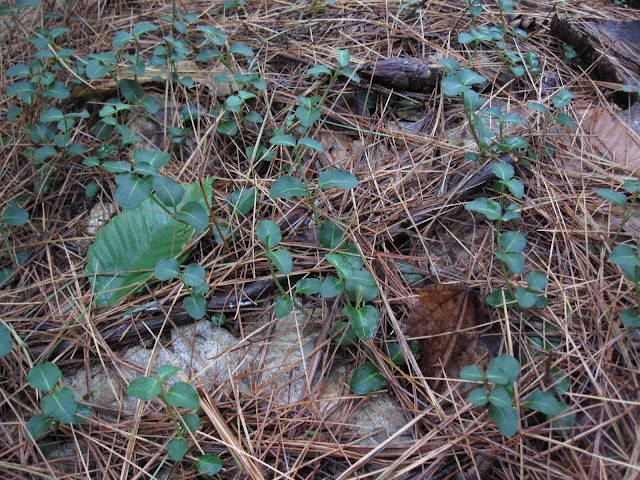 And even a couple of new white pines to carry on the family tree. 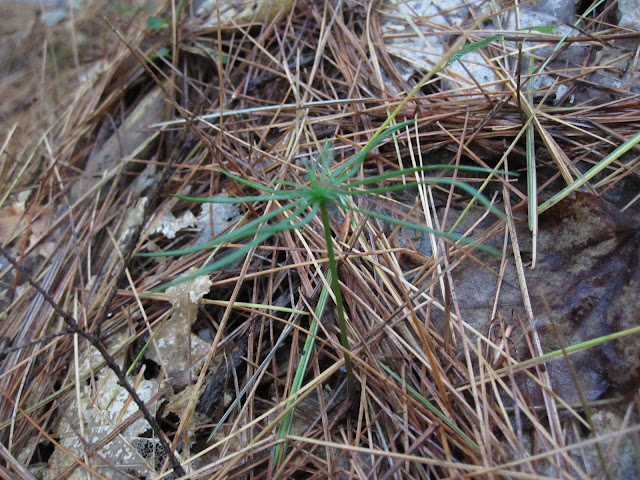 And this is just on the outside.  I didn't violate the sanctuary, but if I did I'm sure I'd discover an even more interesting array of life including ants, grubs, earthworms, salamanders, and thousands of microscopic organisms working slowly but relentlessly to decompose the stump into rich soil and compost.  By the time that happens the plants now growing on it will have extended their roots deep into the earth and will survive without the stump, consigning to oblivion what provided their initial nurturing.

It will be quite a battle among the trees to see who reigns supreme over this little patch of New Hampshire.  There will be enough light and space for only one tree to emerge to any magnitude.  The maple and the pine will grow the fastest;  the hemlock and oak more slowly, but will establish a more complete canopy, perhaps shading out the faster upstarts.  Anyone want to make a wager on the victor?  I'll put my money on the hemlock;  it seems to be off to a healthy start, and they can inch upward for years with very little sunshine.  I'll hold your wager in escrow and get back to you in, oh, about 50 years.


This post is being sent from Steamboat Springs, Colorado as we are on a trip to visit the national parks of the southwest.  But fellow nature watchers (including our good friend who is staying at our house - thank you!) have offered to keep me appraised of what's happening around Lake Wicwas while I'm away.  Of course, I'll also share  interesting events I encounter along my trip.  The first thing I noticed is how far ahead the season is out here at the higher elevation.  Whereas the trees are just starting to turn in New Hampshire, the aspen in Colorado, even at Steamboat's base elevation of 6900 feet, are at already at peak color.

Email ThisBlogThis!Share to TwitterShare to FacebookShare to Pinterest
Labels: Steamboat

Fall is here - it is my second favorite time of year to walk the trails around Lake Wicwas (early spring, with the renewal of life emerging everywhere tops my list).  With the black flies, mosquitoes, and deer flies now gone, I can once again enjoy a slow, leisurely walk in the woods without being hurried on my way by those annoyances.  It's a time to look closely at the lake and forest features I passed quickly by during the summer.  One of my favorites is the red eft.

As I was watching one recently it dawned on me just why I am so fascinated by these small amphibians.  One reason is that they move in such an interesting manner, like a giant dinosaur or alligator in miniature.  But I realized the critical factor is that I can watch it.  What other forest creature is so slow and calm that you can get right down on your hands and knees and watch it do its thing?  Just about everyone else - frogs, snakes, squirrels, birds, deer - they dash off in an instant.  But these little guys just go slowly on their way for you to watch. 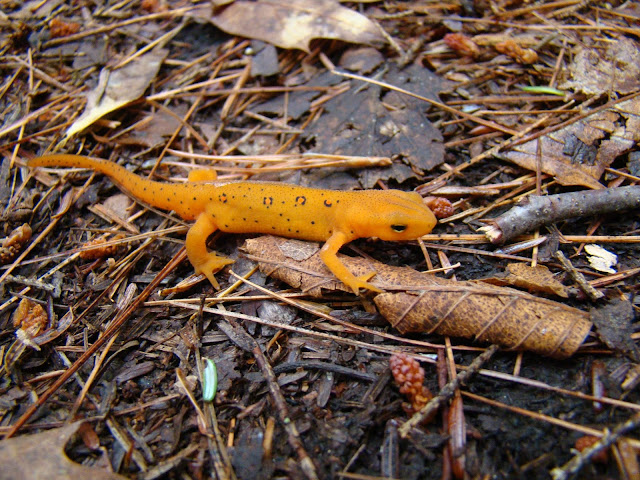 While I was down there, I also noticed another miniature form of a previously giant object:  the Tree Clubmoss.

This looks to me like a towering coniferous tree, but is in fact only five or six inches tall.  Similar to how the red-eft looks like a prehistoric creature, the clubmoss has been around for millions of years and is believed to be similar to very earliest plants that evolved on earth.  And in fact, their early relatives were 100 feet tall.  They grew in giant swamps and pumped so much oxygen into the atmosphere that the O2 content was 30 to 35% versus today's 21%.  This was during the "Carboniferous" period, so named because plants like the ancient clubmoss grew so abundantly that when they died their carbon loaded bodies were compressed into the coal and fossil (i.e. carbon) deposits we use today.  Imagine this a forest of 100 foot tall trees. 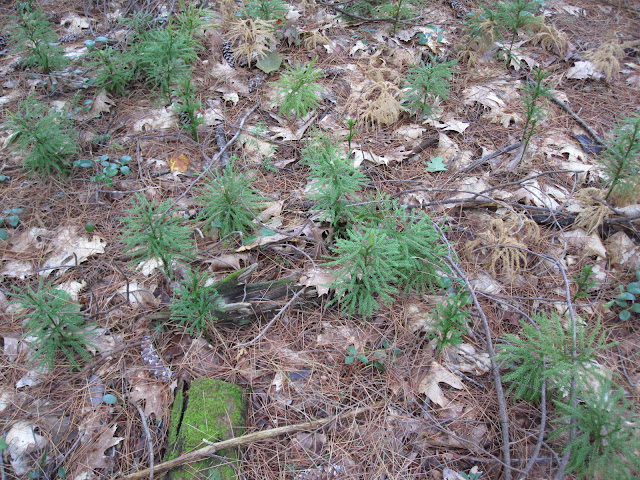 Much of what I learned on the Clubmoss came from a report on the NH State Parks blog - you can read the full report here.

If you're in the woods this fall, take advantage of the temperate, bug-free zone to look for previously unseen sights - maybe you'll even find a troll residence hidden beneath a moss-covered stone roof! 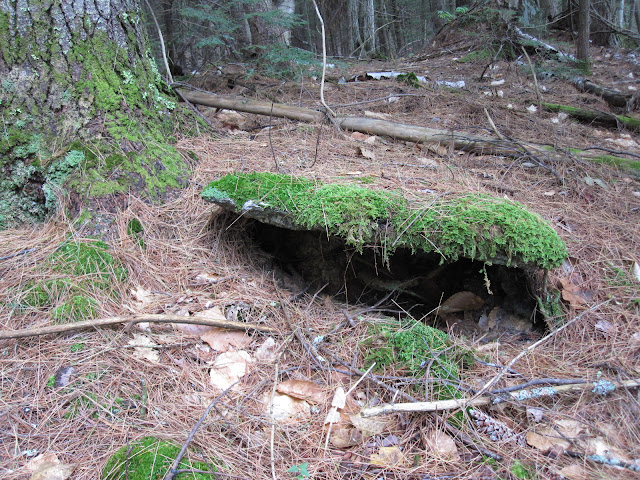 I hope the troll peeks out in the evening to catch the beautiful fall sunsets. 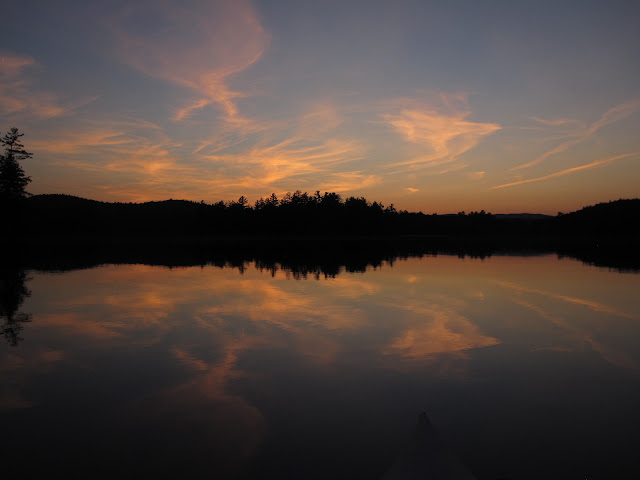 Posted by Scott Powell at 3:46 PM No comments:

This summer was the longest there can be, if one uses the dates of an early memorial day and a late labor day as the mileposts of summer.  But with labor day come and gone, the activity on the lake has subsided considerably.  This past weekend, even though the fabulous weather continued - at least for Saturday - there was less action on the lake, only a few kayaks and canoes along with the fishermen.

We took a slow ride around the lake with a good friend to enjoy the beautiful calm day, and were treated to a few sights:  an osprey 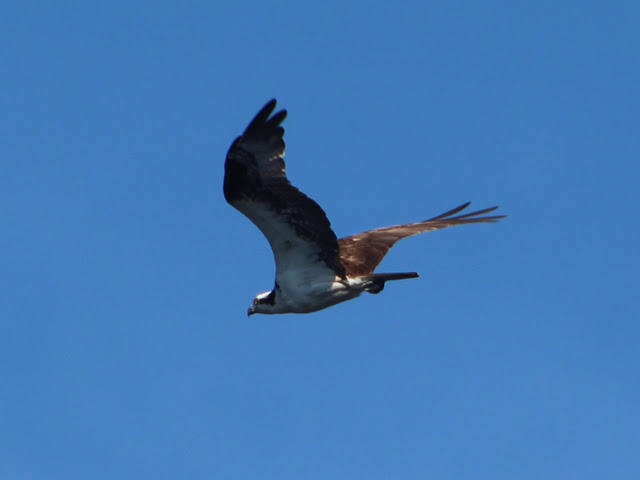 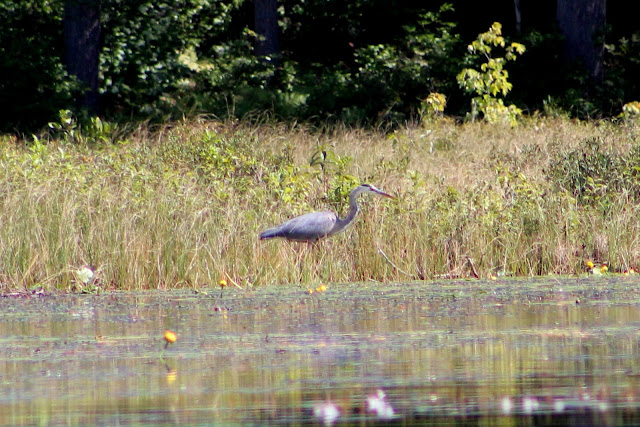 and a couple of loons. 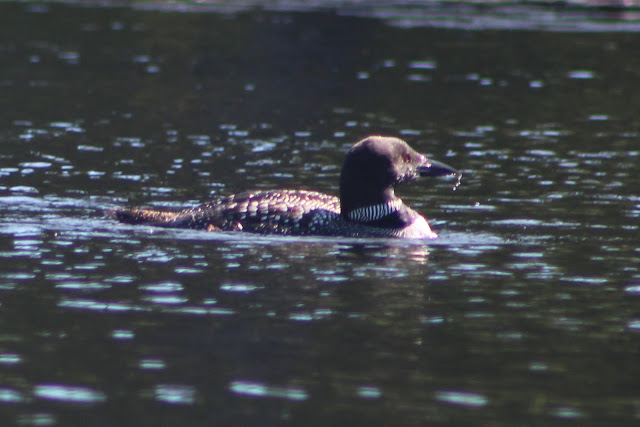 Spring may provide the mother-load of wildflowers, often with stunning beauty and short blooming spans such as the Lady Slipper and Trillium, while summer treats us to longer lasting, often large fields of color provided by the likes of Daisies and Black-eyed Susans.  But fall has its own special flavor as late flowers fill in the color void before the trees start to turn.  These range from brilliant fields of goldenrod to tiny white flowers such as the Nodding Ladies' Tresses.
A classic fall bloom is the Pearly Everlasting, a dry white flower that lasts a long time.


Asters, closely related to daisies, are frequently found in fields this time of year;  these were growing near the lake.

Red clover is a summer flower that blooms into the early fall. 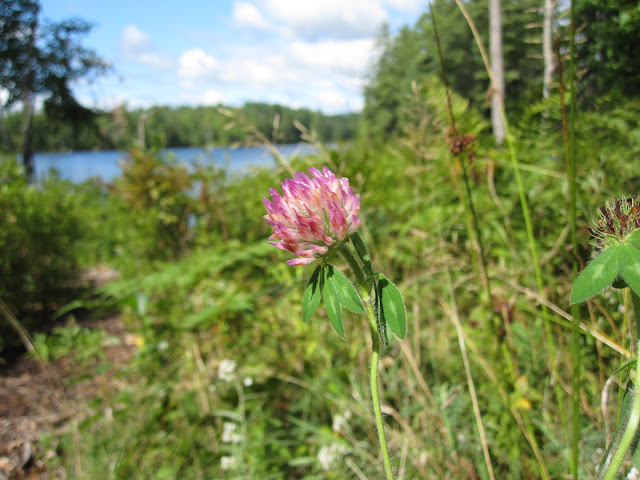 As with clover, the wild thistle is a favorite of bumble bees collecting their pollen, 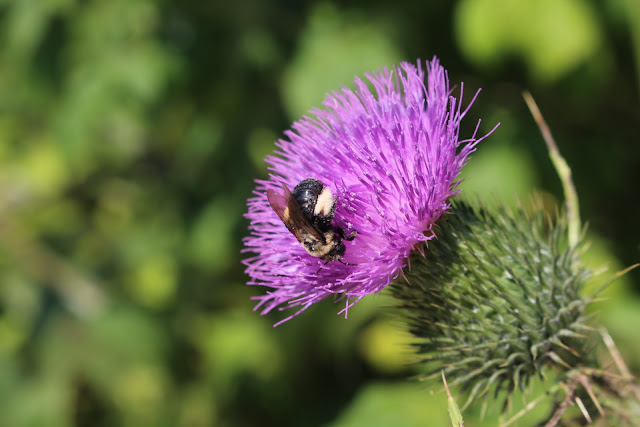 but evidently Lady Bugs appreciate this food source as well.

The bumble bee, with its furry coat to keep it warm, will be active into fall well after the other bees have disappeared.

Yes, summer is waning and fall is on its way.  Early signs are evident with the animals, on the plants, in the trees - and on the water. 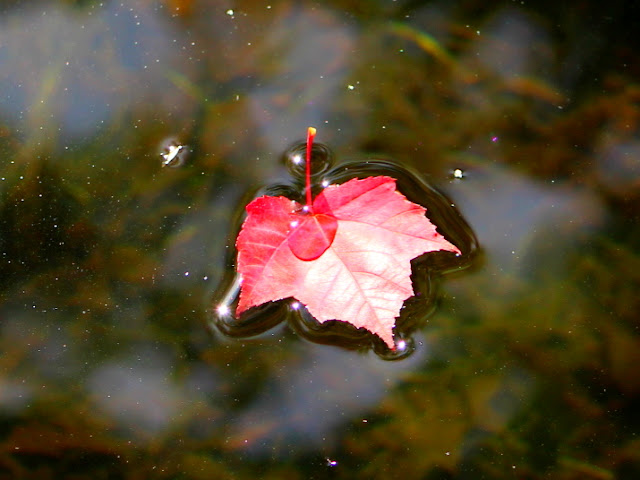 Posted by Scott Powell at 8:23 PM No comments:

Last week I commented on the large mats of Bladderwort in the lake.  It's not just Lake Wicwas, but many lakes are experiencing this phenomenon this summer.  Marge Thrope sent me an article on the subject written by Amy Smagula, NHDES Exotic Species Program Coordinator, in the Volunteer Lake Assessment Program newsletter (click here to read it).  Amy says aquatic plants have boom and bust years just like terrestrial plants, and 2015 is the bladderwort's time for glory.

The autumn harvest and gathering has commenced in the Lakes Region;  an audible indicator is the annual pine cone drop which is now taking place in the pine groves around Lake Wicwas.  It's not the trees themselves dropping their cones, but rather these little rascals cutting them off the branches so they fall to the ground where they gather them up to store away for a cold winter day.


You hear it far off on a quiet morning, the cones bouncing off all the dead branches on its way from tree-top to forest floor.

It sounds like an old-time pinball machine where each branch rings up another 1000 points on the scoreboard.

This will be the source of those piles of pine cone shells that will appear on the snow this winter.

On August 16th this year I noted some of the berries around the area, including the Hobblebush viburnmum with its bright red fruit.  Now, three weeks later, those berries are turning black. 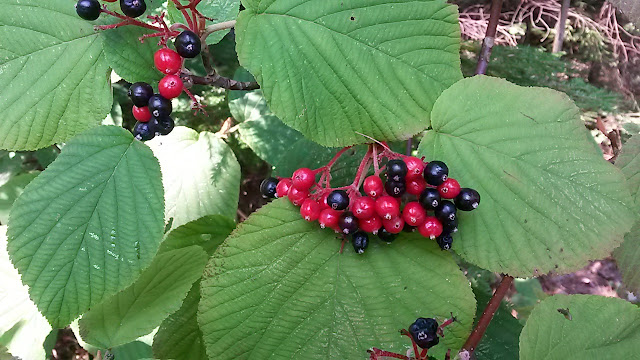 I find it interesting there aren't any berries that are part black and part red - it seems each berry changes color almost at once - maybe overnight?


I also showed evidence of bears eating berries of some sort, and this week I found signs of fox doing the same. 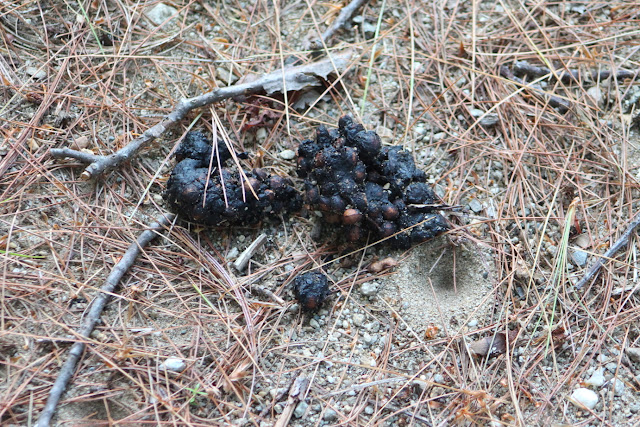 The berries in this scat look suspiciously like those viburnum berries, but that's just a guess.  You may have also noticed that this fox left its calling card right next to an antlion dwelling - that little cone in the sand where the antlion excavated its trap to catch unsuspecting ants - just like Sarlaac, the giant antlion in the Star Wars movie "Return of the Jedi".)

One more fruit bearing plant that is ripening at this time:  the Indian Cucumber.  The root of this plant is edible, but the berry is not. 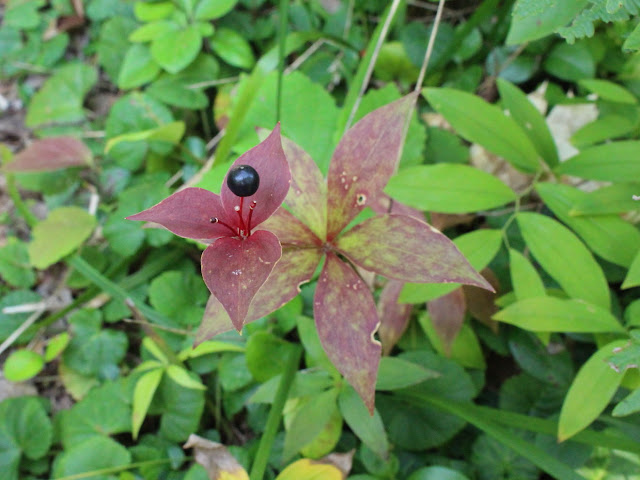 At least not to humans -  I don't about animals.  If squirrels eat them, you can be sure this guy will be watching to make sure you don't steal its food if you lean down to take a look at it. 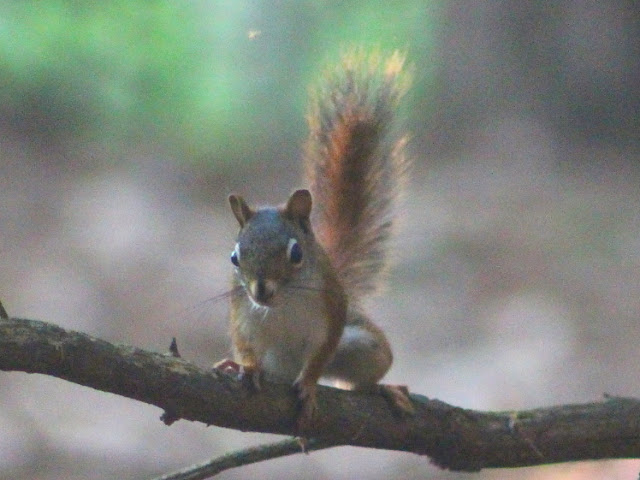 Posted by Scott Powell at 8:00 PM No comments: