You may have seen the post on Wednesday reporting the ice went out of Lake Wicwas on April 25th.  It was the second latest date I've recorded, with the only later one occurring on April 29, 2002.  It happened rather quickly once it started, as Monday and Tuesday were warm days with full sunshine (there are almost 14 hours between sunrise and sunset here in late April).  Here's how the lake changed over the course of five days:

When the ice went out, spring just exploded around the lakes.  Within the course of just a few days a whole season's worth of new life appeared as everyone who was waiting arrived at once.  Just some of new arrivals include the migrating waterfowl such as mergansers, buffleheads, wood ducks, ring-necked ducks, and of course, the loons.


I love how you can see the disturbance on the surface of the water from the down force of air pressure created with each downward thrust of his wings.

And my favorite pair of wood ducks has appeared on the lake, hopefully to nest again around Marion Cove.

Most of the ducks are shy and keep their distance, but a pair of mallards came right up and put on a show:  Click here to watch.

Marge Thorpe got a good look at what is most likely one of our nesting loons while it was fishing near shore.

I'm pretty sure I got a glimpse of the silver and white bands on one of the several loons present, but I'll wait for positive confirmation before I'm sure our nesting female has returned.

There were also more songbirds appearing including phoebes, thrushes and several different warblers.  They're here knowing there will soon be a smorgasbord of insects for them to feed upon, which means the arrival of some less welcome visitors as well. 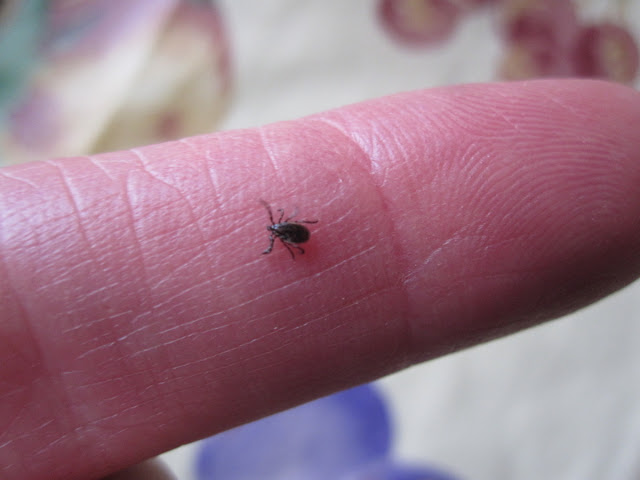 And let's not forget the mammals;  both muskrats and beavers are now out plying the lake.  As soon as there was open water around the edge of the lake the beavers started their evening patrols, looking for food and building materials, and mounding piles of debris up on the shore.

Perhaps you've noticed the increasing size of some of the beaver lodges.  The one visible from Chemung Road in particular is now towering above the lake.  It looks like it will be another active year with the beavers - watch out for those precious trees and shrubs!  A simple wrap of chicken wire will usually protect them.

So while all the animals have declared spring is here, I'll close with two interesting views of what the lake looked like just one week ago, and which show how the wind and sun let the ice form in the fall and then take it away again in the spring.

From now on, pictures will be of shining blue liquid!
Posted by Scott Powell at 3:32 PM No comments:

Ice out on Lake Wicwas was declared today at 12:41 pm when the last section of ice had melted away from the boat launch.  Stress Free can now make all its ports of call (the boat launch, the large cove on Wicwood Shores Rd, and Marion Cove).

Posted by Scott Powell at 2:12 PM No comments:

It's always fun to run into a friend who is also out enjoying the sights and sounds of nature.  Last week I bumped into Russ Brummer, a teacher at New Hampton School, out with a couple of his students on field trip, and we talked a bit about interesting things we had seen over the winter.  After we had gone our separate ways I thought, I should have asked him about a mystery Linda and I had been working on (after all, Russ is the Science Department Chair at the New Hampton School and has degrees in Biology and Environmental Studies!).  Linda had found this fox scat (or possibly coyote scat) that featured a prominent bone protruding from it.

At least it looked like a bone to me.  But after separating it to look closer, it didn't have the structure of any bone I could recall. 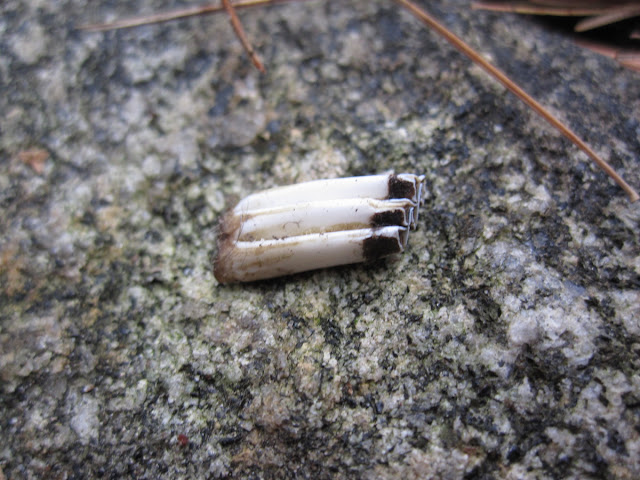 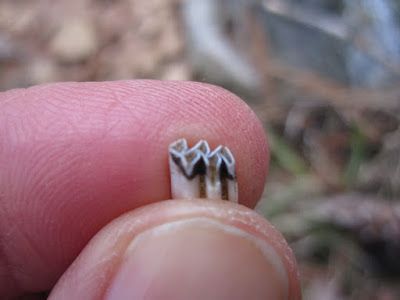 So when I got home I sent a few pictures to Russ to see what he could offer.  He immediately proposed that it was a tooth.  Since I happen to have a couple of animal jaws that I have collected from my walks over the years I went to look them over.
It doesn't look like a deer tooth.
So sure enough, it is a tooth, and most definitely a molar from a beaver!  It makes one wonder if the fox caught a beaver, or more likely was just gnawing on the leftovers of one that had died or was killed by something else.  Either way, thanks Russ for solving the mystery!

After a few steps forward, spring took a step backward this week with another cold stretch and a touch of snow that brought us back to winter scenes. 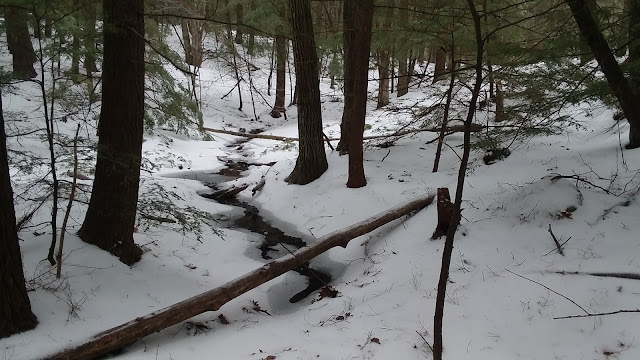 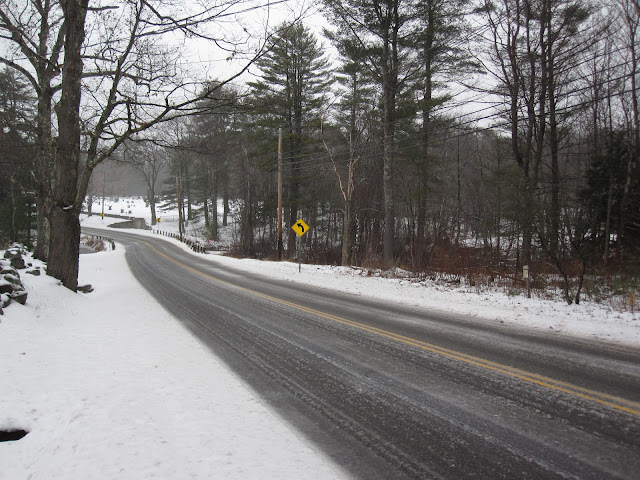 But the past few days have put us back on the right track, with ice in Meredith Bay receding down the lake, and the ice on Wicwas showing signs of softening as it turns from white to dark gray.


I also saw my first Great Blue Heron of the season, fishing in the ice off the Harris Conservation Area, and just today, the first wood frogs were singing in a vernal pool, calling to their mates that spring is here.  Other signs of spring are joining in too:

It won't be much longer now, and with the weather finally changing I look forward to seeing more friends out on the trails - and soon enough on the lakes - with more mysteries to share and solve. 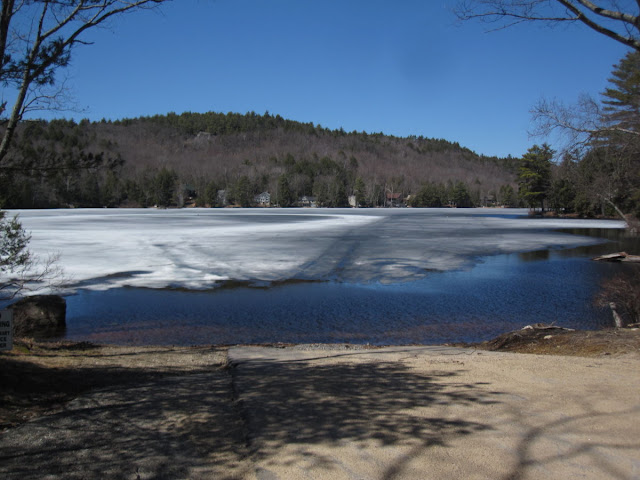 Late breaking news:  The first loons were spotted on Lake Wicwas today, in the open channel of water along the north side of the lake!  (Thanks AC & TC!)
Posted by Scott Powell at 4:56 PM No comments:

The world is inching its way along towards spring, always at its own pace.  The days (until today that is) have been nice enough to get out and enjoy some springtime walks, but it's clear we still have a ways to go before lake activities are at hand.


The latest report from the Lake Winnipesaukee Ice Out team (Emerson Aviation) is that there is still no appreciable open water on the big lake.  Here on Lake Wicwas we have the same story, just bits of open water around a few edges edges.

I'm still able able to venture out a short ways from shore to measure the ice, and it stands 12" thick, though we are now down to only 3" of solid ice with the rest being soft, porous ice.  But it was still strong enough on Friday to support me without sinking in at all.

Bird activity seems to be picking up - there was a bald eagle and a pair of red-tailed hawks soaring over the lake this week.

And mallards have joined the geese on the lake.

The mallards seem to spend most of their time in the water, though they occasionally climb up onto the ice for whatever ducky-reason they may have:  (Link to video)

I even flushed out a grouse on one walk, though I had to send a picture of the tracks to one of my colleagues at the Conservation Commission to identify the tracks (thank you JS)!

Even in the absence of insects the flycatchers and warblers are starting to return;  I heard my first phoebe and chestnut-sided warbler with its pretty "sweet-sweet-sweet-to-MEET-you" song on Friday.  On morning walks it's reassuring to hear the summer songbirds singing again.  We enjoy the sounds of chick-a-dees, titmice, and other year-round residents through the winter, but the songs of warblers provides some subliminal message that even if one's walking on snow and ice, summer will arrive.  Sounds are hard to capture, but here are some of the sights from one spring walk this week after an April shower.

It is a time of contradictions, old man winter fighting to conserve the past, and spring, pushing us into the inevitability of the future.

Posted by Scott Powell at 2:07 PM No comments: