Last week I noted our Wood Duck pair had returned to establish its nest near the lake.  This week we watched as they had to fend off a small flock of would-be home-seekers that thought Wicwas looked like a nice place to raise a family.
But our local pair came down to defend their turf.
There was a stand off, but after a bit of non-verbal communication (see the male pecking at the water) they were able to convince the visitors that this cove had been claimed.  Click here to watch video.  (I had to upload the videos to youtube to keep the resolution from being really bad - even there it's not great.)

The intruders did make a couple more approaches with the same result;  they ultimately gave up.

Earlier we had the unusual sight of a duck walking around in tree branches.

It was Mrs. Woody, waiting patiently while Mr. Woody prepared the nest, probably working on enlarging a cavity in a rotten tree.  Wood ducks have claws on their feet - unusual for ducks - that let them climb around in the trees.  Mrs. Woody sat and watched patiently from her perch on the branch.

Hopefully we'll have little woodies in a few weeks;  these are truly stunning birds. 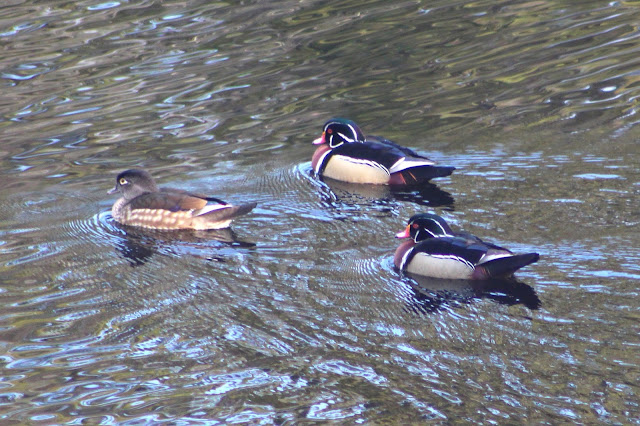 This wasn't the only display of duck mating behavior this week - perhaps the earlier ice-out means we are seeing more mating activity than usual.  We witnessed a group of male Hooded Mergansers trying to win over a sole female by impressing them with their beauty and strength. 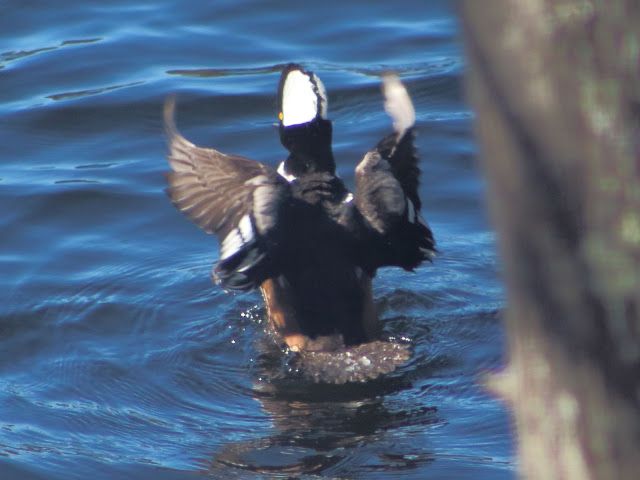 It began with some preening and head-bobbing while the female watched from under a hemlock tree - you'll see her dive and then swim back out to watch the antics.  Click here to watch video.

Then they went on to chasing each other and circling around the none-too amused female.  Click here to watch video. And a second.

As time went on the behavior escalated in more aggressive tactics.  Click to watch.

Until finally she decided she'd had enough and flew off with the whole bunch in hot pursuit.  Click to watch.

It must be frustrating when there aren't enough mates for all, but just like the deer and many other species, it ensures propagation of a strong gene pool.

The last of the bird feeders have now been taken in to ensure the bears don't learn to associate with humans.  It took the downy woodpecker's long beak to extract the final few seeds that the chickadees and nuthatches couldn't reach. 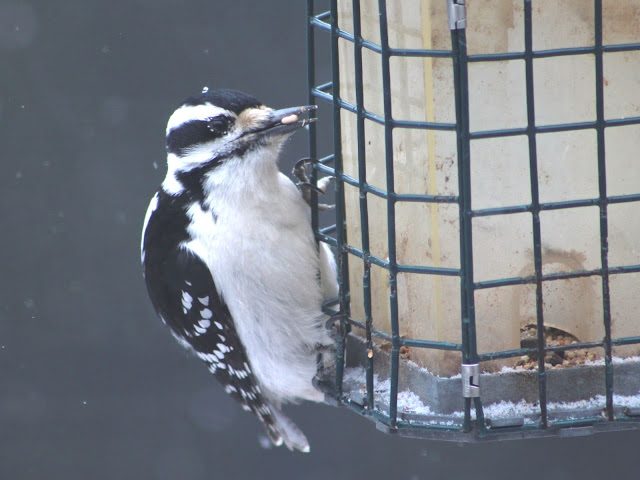 Soon enough, humming birds will swap places with the winter flocks, as they coax the sweet nectar from the bounty of Linda's summer flowers that will supplant the seed-feeders on the posts!

Finally, we had a rare but special visitor to Lake Wicwas this week: a pair of the aptly-named Goldeneye.  These fabulous birds were stopping here for a short rest and a meal on their way to breeding grounds in northern New England or Canada.


A week like this with so much activity causes me to reflect on the amazing range of animals that this precious habitat attracts and supports.  And to remember the many generous people over the years who have worked so hard to protect this unspoiled spot in our ever-developing world. 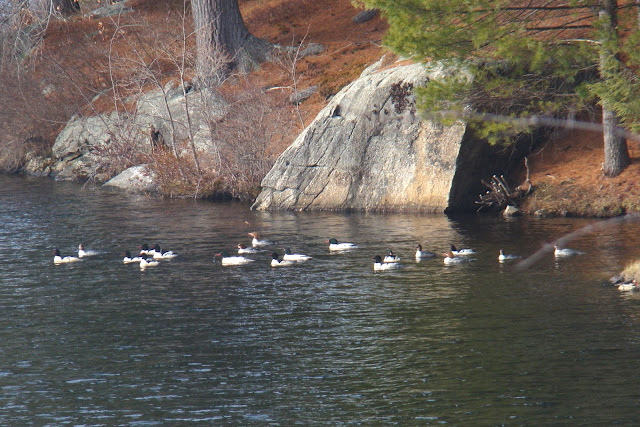 Posted by Scott Powell at 7:40 AM No comments:

If you saw Friday's post you know that the ice went out of Lake Wicwas on March 18, the earliest date ever, by three days according to my notes.  Lakes Winnipesaukee and Sunapee also went out on the same day.  The last spot on Lake Wicwas to clear out was the boat ramp, as the northwest wind blew the remaining ice down into that cove.

It's quite a change from last year - remember what the lake looked like in March 2015?
With the ice gone from the lake the migratory birds started appearing immediately.  Of course the geese arrived even before the ice was out, walking around on top of the ice as usual.  But there were sightings of loons on the lake right on the 18th, as well as several of the other usual early spring visitors.  The first to appear was the pair of wood ducks looking for a nest in their favorite spot.
Soon a pair of Hooder Mergansers stopped by for some fishing to nourish them for their travel farther north.
It's cool that they can raise and lower their hood! 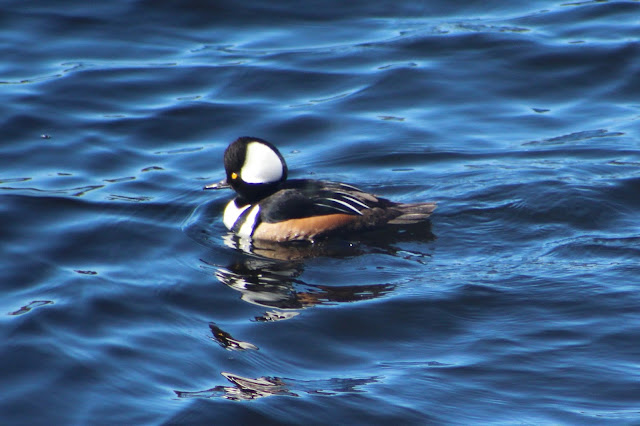 A pair of Ring-necked ducks made an appearance also. 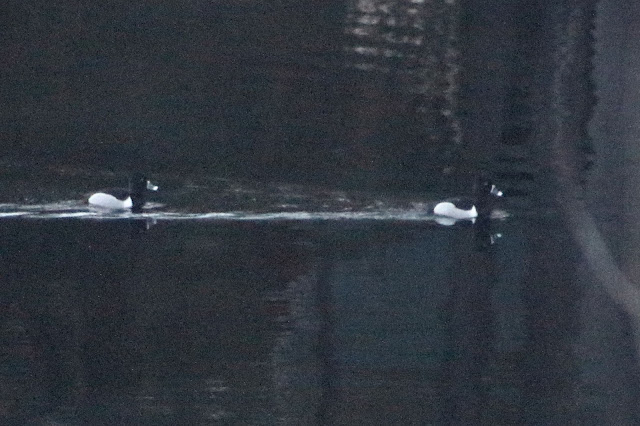 They didn't hang around long, but their departure showed their distinctive markings on their wings and bodies. 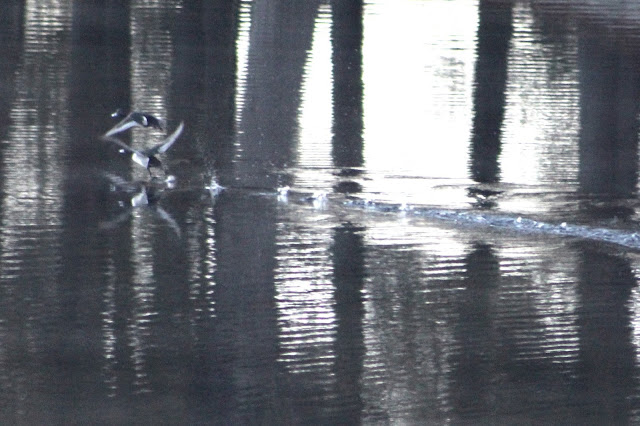 
The trails are all cleared of snow now so we should have several weeks of great hiking before the bugs make their appearance.  It's a great time to be out in the woods with the visibility so much greater than when the leaves are on the trees blocking the sight lines.  In one large melt puddle that collected in a depression I saw large masses of debris floating on the surface. 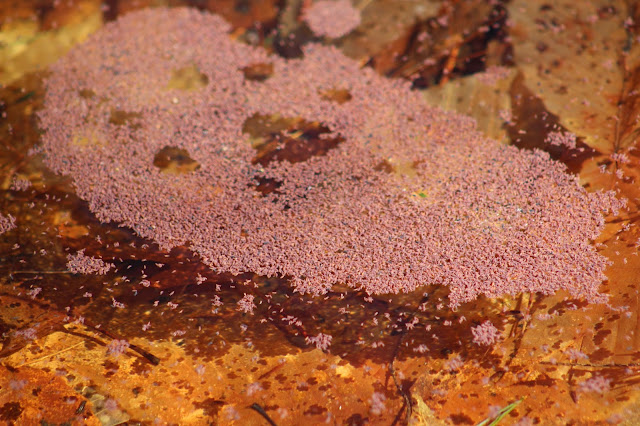 Closer inspection revealed there was actually some kind of life flourishing there.

And even closer inspection told us they were snow fleas! (Linda guessed it!)

We saw these on the snow a few weeks ago and now I know where and how they develop.  It appears that they hatch out as a pink color, then change rapidly to orange, then on to their mature black color.

Based on their inefficient mode of transportation (see February 28 post) I wonder how they manage to get from their hatching puddles to become so well distributed throughout the forest.

Even after a short winter it is a beautiful sight to behold the sun reflecting off liquid water rather than ice.  I can't wait to discover what wonders the lake will reveal to us this year. 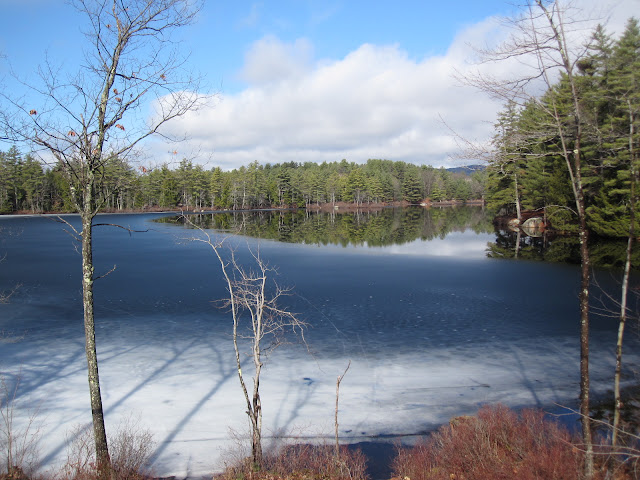 Posted by Scott Powell at 4:29 PM No comments:

Ice out today on Lake Wicwas - the earliest ever.  Check back on Sunday for more details, but let spring reign! 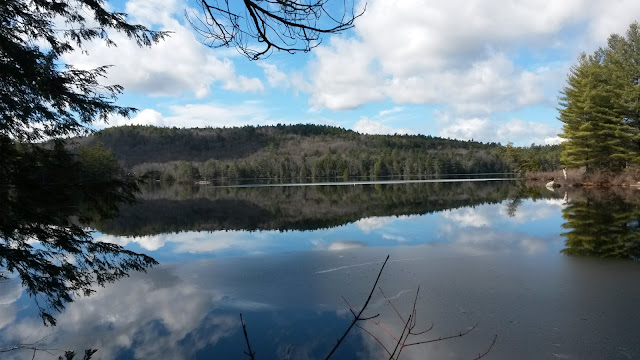 Posted by Scott Powell at 6:49 PM No comments:

The warm winter continues;  how does 68 degrees on March 7th sound?  The snow is gone, and the ice is already soft and translucent with open water around many of the edges of Lake Wicwas. 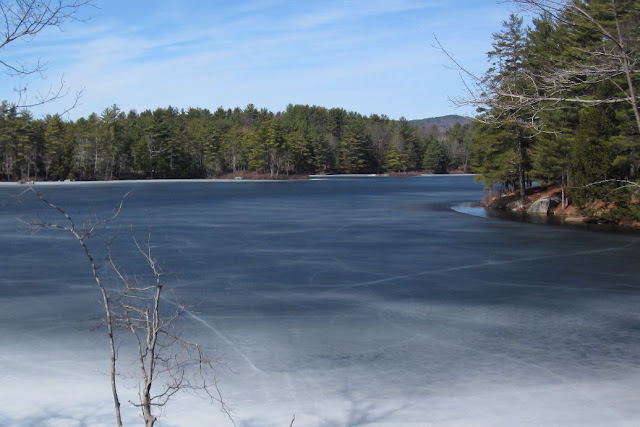 Warm, humid weather took it's toll on the ice, which in turn used its stored-coldness to condense the damp air in its presence as if to say "you're not supposed to be here yet".

The first shoots of green are coming up weeks ahead of schedule.

And I saw the second summer insects of the year (the first were moths at the windows a couple of weeks ago).

Last year at this time we had a couple of feet of snow on the ground and people were out on the ice well into April.
My last trip on the ice this year was on March 8th, when I measured 4" of clear ice under 6" of white ice.  Now there's nothing but mush on the surface, and I won't be surprised if we have the earliest ice out ever.  Did you hear that in Alaska, in order to run the Iditarod dog-sled race they had to truck in snow?

We have taken in all the bird feeders except for one, and that one comes in every night to keep the bears away - they will certainly be on the prowl for food soon if they aren't out already.  A usual early sign of spring is the first yellow goldfinch, but this year they are well behind the times.

Sugaring season also started early, as did mud season, which is passing quickly since the frost never had a chance to penetrate very deeply in the earth.


Snow is the best surface for tracking animals, but mud season can also be good, leaving evidence that the deer are out and moving around.

I would normally be saying about this point that old man winter is starting to lose his grip on the lake.  But this year, he never really got a hold of it!


Posted by Scott Powell at 6:53 PM No comments:

I was away this past week, off to Steamboat Springs for some family time and a taste of real winter.  New England may be short on snow, but Steamboat has received over 300" so far this year.  We enjoyed some great skiing and great weather!

Being away, I thought I would share something I learned recently regarding the regular appearance of floating logs in Lake Wicwas.  I've seen these appear from from the depths of Lake Wicwas since I was a kid, and have noted previously the process:  They have been waterlogged for many years, sitting on the bottom of the lake with tiny organisms feeding on the wood.  As part of their metabolic process these organisms produce gases which collect in the log, displacing the absorbed water, making the log lighter ever so slowly.  Eventually it becomes less dense than water and it starts to float up to the surface, typically dragging the heavier end along the bottom of the lake, meaning it may be invisible at the surface, but a real danger to boaters.  When they reach the surface, people will pull them ashore, usually over to the boat landing where the town will pick them up and take them away.  Over the past couple of years several have been brought to the ramp;  as of this fall there were six waiting for disposal. 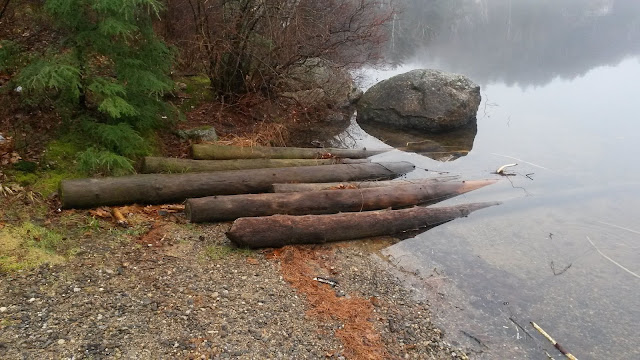 I had always assumed these logs were just escapees from logging that was done in the past around Lake Wicwas.  Now here's what I learned in Daniel Hayduk's new book "Meredith Chronicles" (The History Press, 2015):  The hurricane of 1938, which came up right through the Connecticut River Valley, destroyed one third of New Hampshire's forest, and half of its white pine trees.  The Civilian Conservation Corps and the Work Progress Administration, two agencies established during the depression, came in to help salvage the massive glut of timber.  Since there was much more timber than was needed, the government set up price controls to protect woodlot owners from financial ruin.  But still, there was much more timber than could be used before it would be ruined by insect damage.  So the surplus timber was submerged in lakes to protect it from insects, and Lake Wicwas was one of the main storage sites!  So these logs that continue to appear, 80 years later, are souvenirs of the great Hurricane of '38.

There are a few other signs of that day in 1938 that can still be seen in the forests around the Lakes Region - in the form of rotted tree trunks buried under years of leaves, with mounds of earth at their base where their roots brought up soil and rocks when they fell.  This tree is not that old,
but it shows the concept as it has all the right characteristics:  exposure to southwest wind off the lake, and laying in a northwest direction.

According to Tom Wessels "Reading the Forested Landscape" (The Countryman Press, 1997) it takes "a couple of decades" to create a moss bed on a log, and this tree has had its moss bed for at least 15 years, but that dates it only as pre-1980.  Plus the soil around the base doesn't show the wear of 80 years of weathering.  This summer I'll have to look for signs of 1938-felled trees on dry land to accompany the floaters in the lake.

Until then, I'll enjoy the last few weeks of this rather feeble winter, missing all that snow from Colorado.

Posted by Scott Powell at 12:00 PM No comments: