We are less than four weeks from the vernal equinox and it felt like it could be tomorrow with the record warm temperatures throughout New England last week - it was in the 60's in the Lakes Region, and it hit 80 in northern Massachusetts.  The birds certainly thought spring was coming as a flock of titmice were up in tops of the trees singing their spring arias, and the chick-a-dees were sharing their gentle "dee-dee" song of springtime.  I also saw my first purple finch of the year.

Another finch, however, had an unfortunate altercation with a window.  I heard the bang on the window, knew what happened and went out to assess the damage.  What I thought was a poor little goldfinch was sitting on the snow, stunned and motionless.
I could see it was going through the NFL concussion protocol before getting back into the game.  I checked on her several times over the next 15 minutes and was getting concerned she might not recover.  But on the last check she reacted to my presence and flew off to join her flock with no obvious impairment.  But while she was stationary on the ground I was able to get a good look at it and see it was not a goldfinch, but rather a female red crossbill - the bill was the obvious factor.

The fine elements of its feathers show how it can insulate itself in the winter with tiny pockets of trapped air, and the cross-beak facilitates the extraction of seeds from pine, spruce, and hemlock cones. 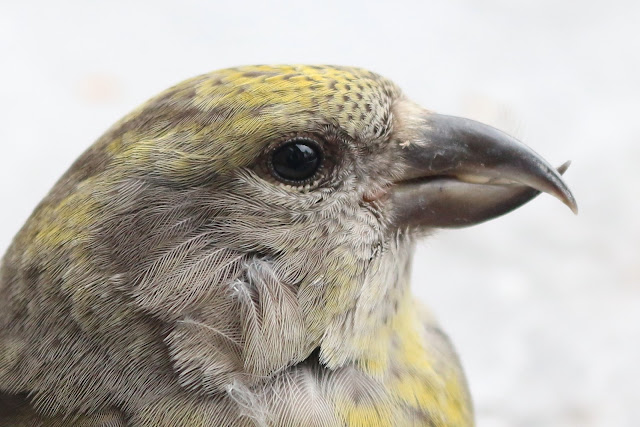 I hadn't seen a red crossbill before, so it's a new one for my list.  And I had to look it up, passing by the red crossbill at first, not expecting a yellow bird to fit this name.  But only the male is red;  the female is yellow.  An interesting aspect of this bird is that it will breed at any time of year, even in the middle of winter, if there is a good food supply.  And this winter is certainly a good cone year as indicated by all the white pine cones in the trees last summer, and all the cone shreds seen all winter long on the snow.
Even with warm weather there's still a good amount of snow around except for open areas with southerly exposure, and fresh snow early in the week and again today helped freshen things up.

Just a couple of days ago things were looking grim and this weekend both the dog sled races and the LRCT ski event at the Castle in the Clouds were cancelled;  today's snow was just a little to late for them.  Let's hope next weekend's Lake Wicwas Association snowshoe tour doesn't also fall victim to the weather (everyone is invited - let me know if you're interested).  If it does, at least we'll enjoy the signs of spring in advance of the coming equinox.

Posted by Scott Powell at 5:00 PM No comments:

Snow conditions set up good tracking parameters this week;  tracks that were set in dense snow froze in place by the rain that followed, so a lot of animal activity was captured around New Hampshire's lakes and forests.  I finally found where the bobcat has been prowling for its meals (although it's missing out on plenty of food right under our bird feeders).  I found these tracks up on a north-facing slope of dense hemlock.

Following them led me to a spot where it nestled in behind a tree to hide in hopes of ambushing a hapless squirrel - or perhaps just for a catnap.
And another spot where it lay down to watch over its world from the top of a knoll with a commanding field of view.

Farther up near the top of the hill, overlooking a ledge I call "porcupine ridge", the presence of its namesake resident was clearly evident.
Porcupine tracks are quite distinct especially in deep snow where they just sort of plow along though the snow making a miniature bob sled run;  I went down to the bottom to take a look.
Porcupine will follow the same path over and over again, to the same tree which they feed upon until they finally kill it off.  The signs of them eating - and dropping their food - is evident under the hemlocks on which they feed.
Here is what's left of a hemlock tree after they have feed on it for years.

The highlight of my trip though was a set of coyote tracks which led me to this scene. 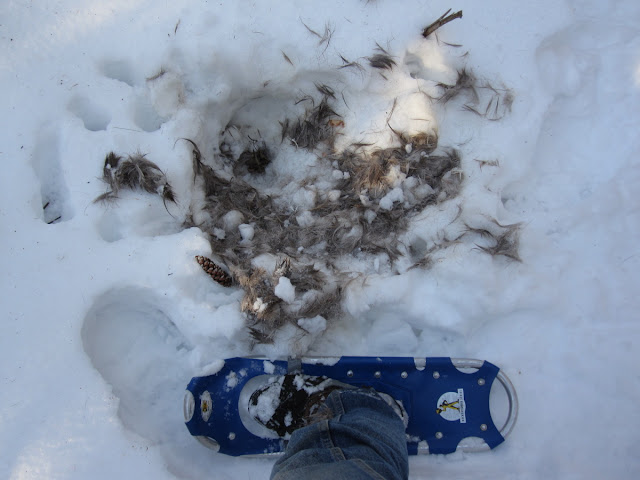 It was not evident to me what had happened here.  The fur had the color of a gray a squirrel, but there was far too much fur for that explanation, and the hair was too long. 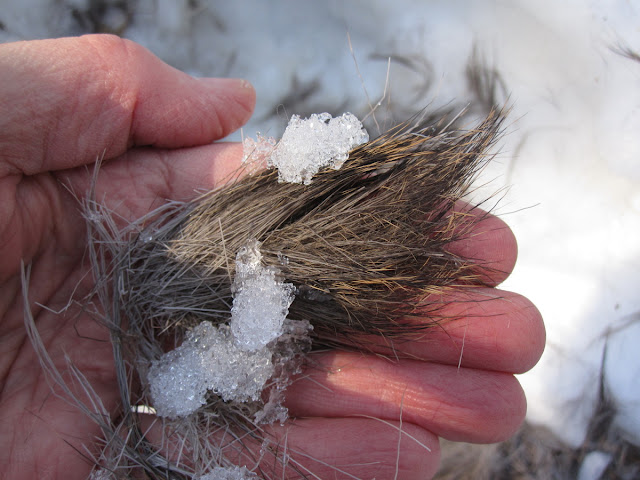 Could it be from a gray fox?  The lack of any bones, skin, and almost no blood further added to the mystery.

After consulting with a good friend with much wilderness knowledge (thanks JK) we considered and ruled as unlikely a kill by a large raptor (including an eagle) that might have eaten everything but the fur.

So, the call went out to the New Hampshire Fish and Game Conservation Officers for some expert opinion (has anyone been watching North Woods Law: NH on Animal Planet?).  The answer from Fish and Game Wildlife Biologist Patrick Tate came quickly:  It is from a deer that was killed many days, probably weeks ago, and all that's left after being dined on by many animals is the fur.  He noted that the very cold weather did cause some deer mortality, and that coyotes and even bobcats can kill a deer.  Where the rest of the carcass is remains unknown.  Experience has shown that animals will drag away portions of a deer to eat in safety, and perhaps more of the animal is buried under the snow.  A deer killed on Lake Wicwas in 2012 disappeared slowly over the course of several weeks.
In the spring the spine was found in the middle of a trail a quarter of a mile away.

Who knows what we'll find this spring when the snow melts.

Elsewhere in the area, the sled dog races were postponed until March 2-4 due to poor trail conditions, but the ice racing was held on Meredith Bay for the first time in many years as part of Meredith's 250th Anniversary celebration.  Perhaps you were able to catch some of the action - it was great fun! 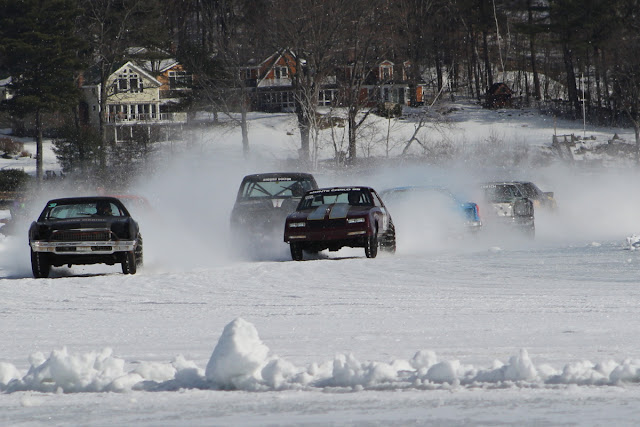 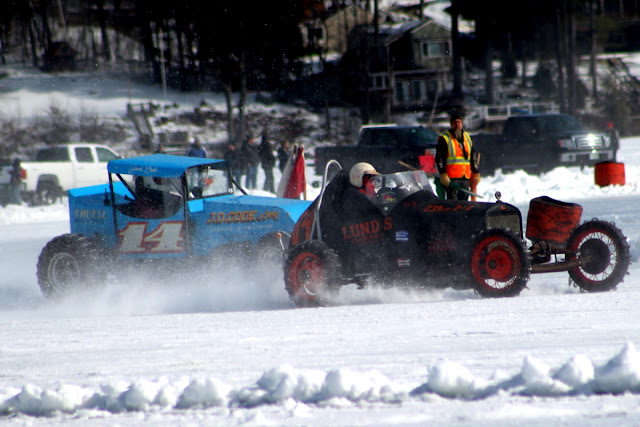 The days are noticeably longer now, and the sun is growing stronger.  It's a great time to get out and enjoy the beauty that is New Hampshire in winter. 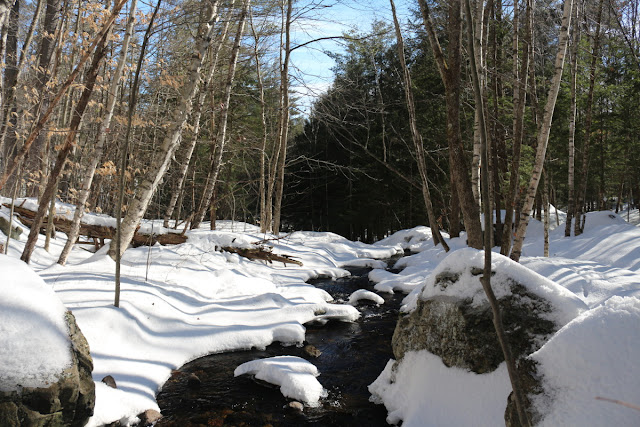 Posted by Scott Powell at 1:00 PM No comments:

People asked me to post some photos from today's races on Meredith Bay, so here they are.  If you want any of the photos, feel free to copy them, or ask me for a higher quality photo and I will send it to you. 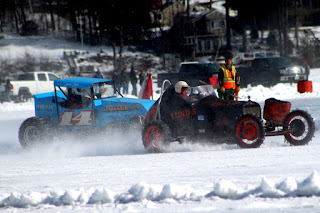 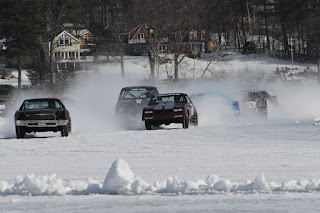 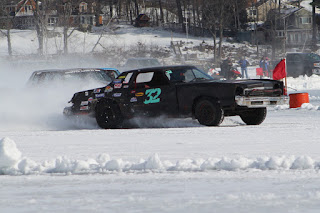 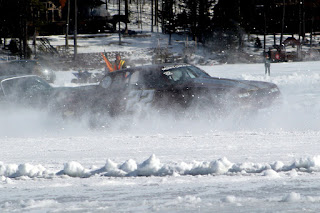 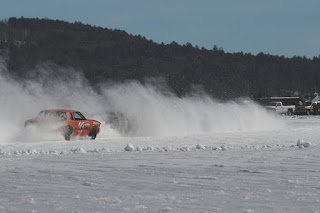 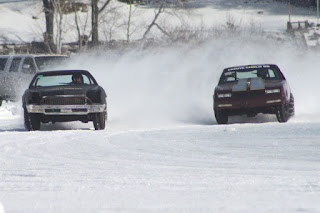 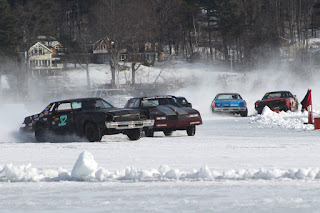 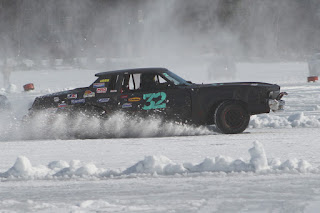 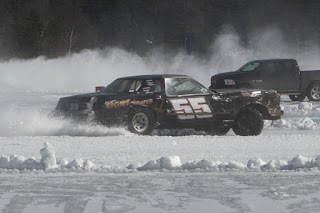 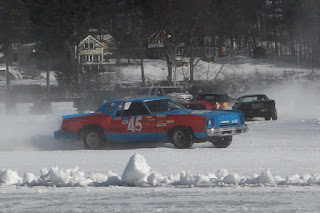 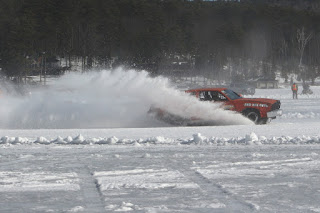 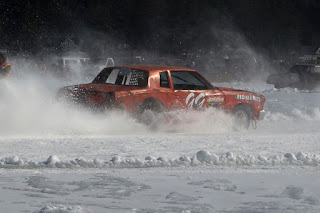 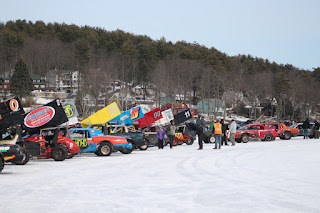 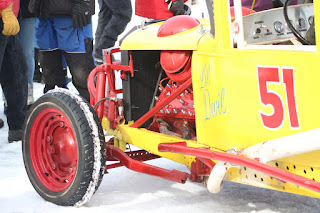 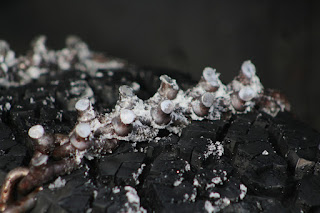 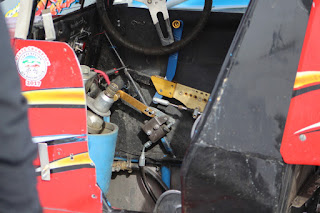 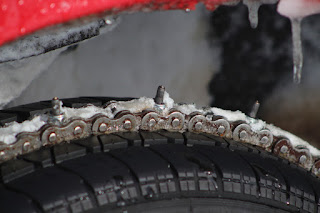 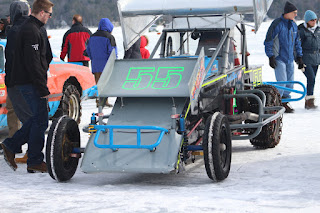 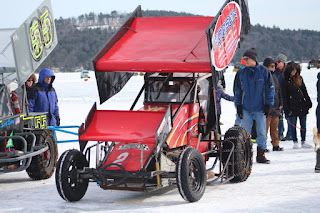 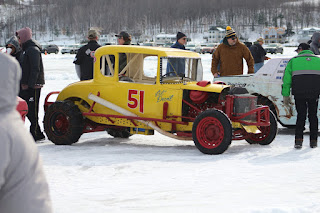 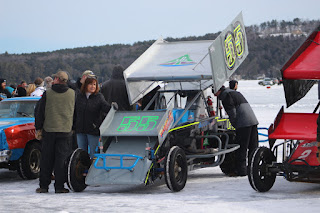 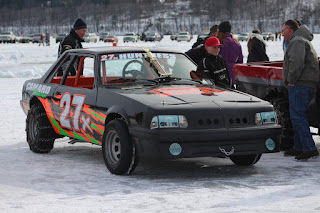 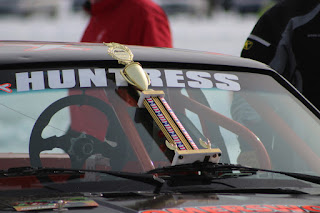 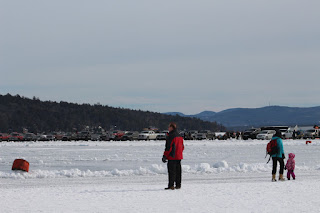 Posted by Scott Powell at 5:41 PM No comments: