A nice little surprise arrived in the Lakes Region on Friday:  a sudden drop of five inches of dry snow instead of the forecasted rain with a little wet snow.
Even though it was followed by a bit of freezing drizzle it freshened things up nicely and allowed at least a few more rounds of mid-winter ski conditions.


Our little furry and feathered friends didn't seem to mind as they came out to play in the snow, the squirrels tunneling under the fresh snow in search of seeds and then popping up, snow-covered, to eat their buried treasure, with the snow on their coats proving what we all know:  fur coats are warm.

Their airborne comrades dropped plenty more down for them, the snow collecting on their heads showing that feathers are also good insulators.

Still, a small bird like a chick-a-dee can lose up to 10% of its body weight just keeping itself warm through a cold winter night.

Earlier in the week the ground dwellers took advantage of the corn cob, stripping the kernels from the cob onto the ground, then sitting there happily munching down on them. 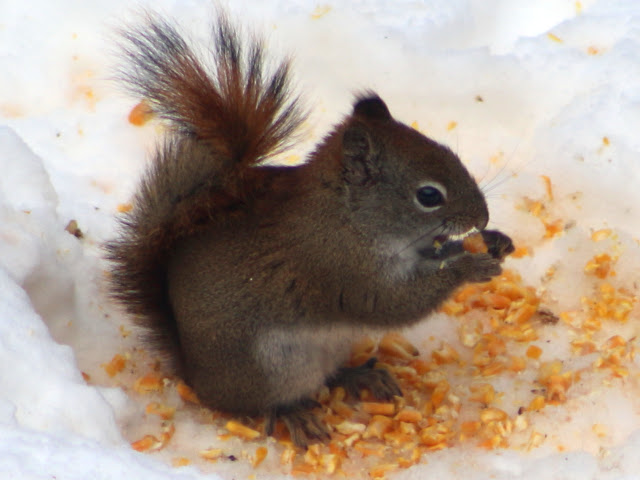 Chipmunks have been out and about, and one theory says that when the chipmunks are out, so are the bears, so the birds better enjoy it while it lasts, as soon the feeders will be back safely hidden away from the bears.

Unless, of course, mother nature continues to extend our winter!
Posted by Scott Powell at 4:17 PM No comments:

Winter has received a generous extension from mother nature in the form of a mid-March storm, and what a storm it was, the biggest of the season.  14 to 19 inches of snow fell in the Lakes Region, accompanied by strong winds out of the northeast which left tens of thousands of people in New Hampshire without power.  Parts of Moultonborough and Center Harbor were without power for days, at least 400 of whom were still not restored as of yesterday.  This video shows some of the damage in Moultonborough along route 109 (courtesy of Sue Mangers and Sheila Adams.)  Fortunately Meredith seemed to be shielded from the worst of the winds and suffered mostly minor outages.

This snow layered on top of that remaining from prior storms pretty much buried all the undergrowth and formed large drifts where the wind blew the snow across the lake, dumping it on the western shores.

I took a short snowshoe trip the day after the storm to see who had been out and about, and I found a treasure trove of animal tracks.  I first came across the tracks of a coyote bounding along through the deep snow.
A bit later I saw this sign:

Those of you who saw the bobcat post on February 19th will know that I'm guessing this sign in the middle of its track makes me think this was a female coyote.

The most prevalent tracks I saw were from weasels - they were everywhere.


I didn't follow any of these tracks, rather they just kept crossing the trail, often following right along the trail for long sections, sometimes revealing the appearance of a pair traveling together (weasels tend to remain as a pair throughout the year). 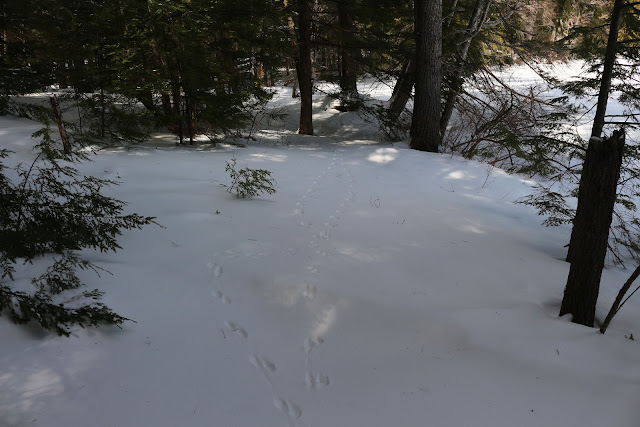 Here one of them dug down into a hole to look for a mouse, their favorite food, though they will take any other small animal they can find - they are ferocious predators.
At one point the trails of predator and prey coincided.

I know that otters love to slide along on their bellies in the snow, but this was the first time I had seen such activity by a weasel. 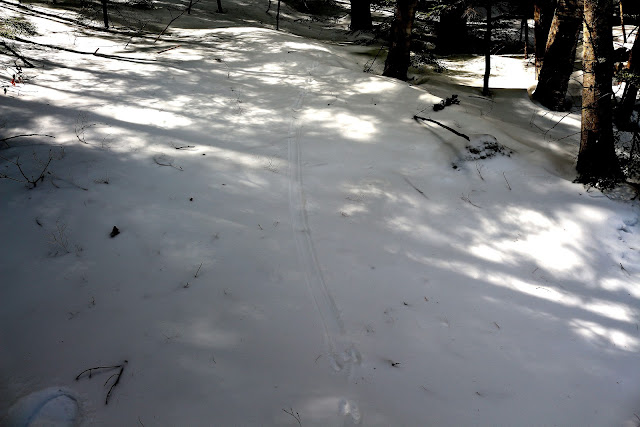 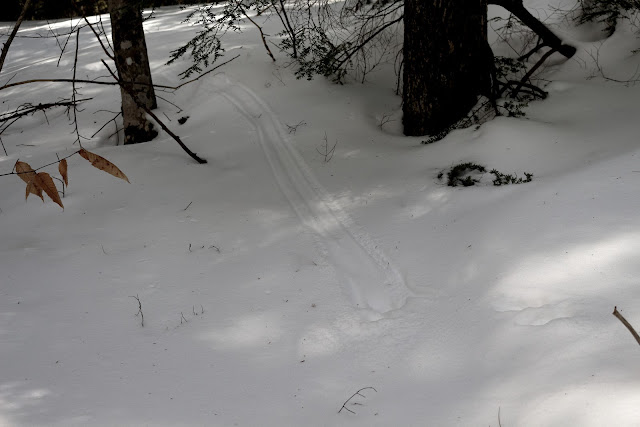 I was intrigued by the marks on either side of the main slide which look like perhaps their feet drag along beside their body.  As we'll see in a moment, this is not nearly so evident in otter slides.

In one area I think there was a set of bobcat tracks following along beside our weasels.


Not much farther along there appeared the tracks of the much larger River Otter, the size difference perhaps not evident in pictures but striking in comparison to the weasel.

They are certainly fun-loving creatures, even creating their own roller coasters complete with twists and turns.

Note there is no evident foot drag beside the belly slide of the otter.

Coyote, bobcat, weasel, otter - all of these animals were present within just a half-mile stretch of trail near the lake.  It makes me appreciate what is meant by a "co-occurrence" area and why it's so important to protect these special places.

This last storm put us over the average snow fall for New Hampshire and will keep winter activities in good shape for some time. What a difference a year makes:  today, the lake is in full winter dress.

While last year at this time we thinking about fishing, boating, and swimming.

The warm winter of 2015-2016 gave us the shortest ice season ever, with ice out on March 18th.  This year it's looking like we'll be much closer to our typical date around April 15th.  Only time will tell.  Spring arrives tomorrow! 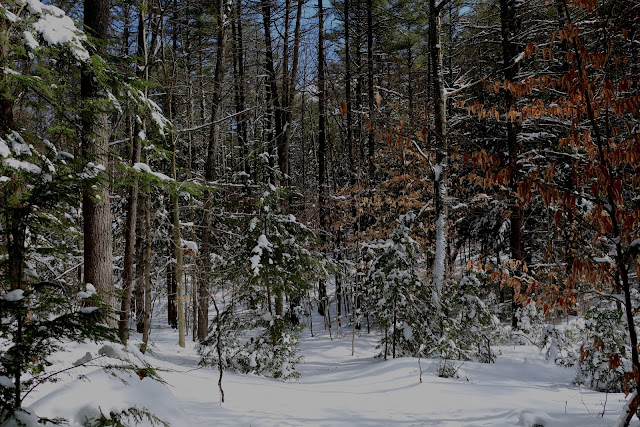 I returned to the lake this week to find bare ground on south-facing slopes, and open water where currents move through the lake.

The melt and freeze cycles of the past weeks were evident in the rock-hard, treacherous surface of the snow that remains, as well as the frozen ruts left in the thawing and freezing surfaces of unimproved roads.

Our initial greeting of warm weather was quickly revoked over the weekend as the temperature fell below zero and the northwest wind plunged the wind chills into the negative 20's.  Saturday was the second coldest day of the winter, the only colder day was way back in the middle of December.  Mud season will be pushed off for at least another week now, and I wonder how the maple sugaring season will respond.

All fall and winter I've been watching the stream that drains Lake Wicwas in to Lake Winnisquam rise in level due to beavers building up dams somewhere between the two water bodies.  At this point it is noticeably higher than a year ago, and I wonder if it will pose a flooding problem for Meredith Center Road when the spring freshets come.

There is not a lot of snow left to melt but if we get significant rain, especially before the frost is out of the ground, it could get interesting.

I have seen very few tufted titmice over the winter, but this week they have arrived in good numbers, with many of them visiting the feeders now back in place, confident the bears will continue their slumber though this cold stretch.

The Lakes Region is at the very northern edge of even the "uncommon range" of the titmouse's habitat (they do not migrate), but they are now spreading northward as the season warms.  (It also appears that their range is creeping north as the climate warms.)

Titmice stay in family flocks during the winter, but as mating season approaches they pair up and will keep together as a pair throughout the spring and early summer.  The male will select and defend a breeding area of 15 to 20 acres.  Both parents will feed and tend to the young, which will stay with the parents and become a new family group through the following fall and winter.  [Ref:  "A Guide to Bird Behavior  Vol II,  Donald W. Stokes and Lillian Q. Stokes]  The well known peter-peter-peter call is starting to be heard now, given mostly by the male as it forms it territory and advertises for a mate.  Titmice make many different calls - you can listen to them here.  As the season progresses, look for males feeding their mate as part of the courtship process, and again as the female incubates the eggs.  [Ref: ibid]

Another nice behavior of titmice:  unlike many other birds, most notably the greedy nuthatch which shovels seeds onto the ground in search of the biggest, fattest seed in the feeder, titmice eat the tiniest seeds in the mix. 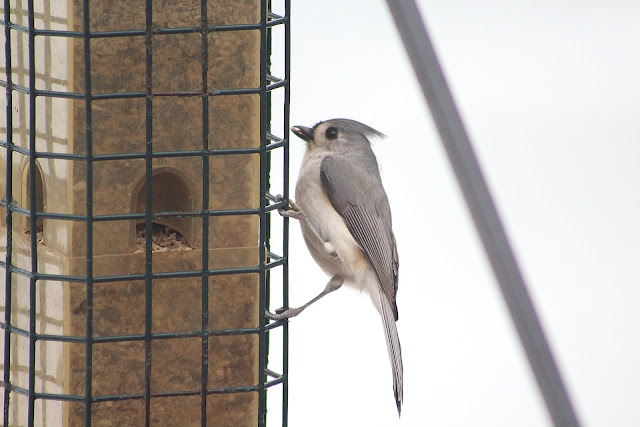 I'll close this week with a really neat picture that someone on the snowshoe tour two weeks ago sent me (thanks D&G!).  It's a photograph of an albino porcupine taken in Canterbury near Hackleboro Orchards.  All the farmers out there know how much porcupine love orchards!

Posted by Scott Powell at 1:42 PM No comments:

We were away from the lake for much of last week, visiting family and enjoying the sights of another winter playground.
Colorado is beautiful but it doesn't have a monopoly on blue skies - this is from Ragged Mountain, right here in the Lakes Region, during our short spell of winter back in February:


Crazy cycles of weather have roiled the whole country the past couple of weeks;  in the Lakes Region  warm temperatures really took a bite out of the snow, but it also provided great opportunities to enjoy the outdoors.

Being away I don't have a lot to report on what happened around Lake Wicwas this week, but here are a few sights I found over the prior couple of weeks.

Back on January 1st when the bobcats came and took a couple of gray squirrels out of circulation I mentioned the squirrels would soon provide replacements with their first of two annual breeding cycles coming in late winter.  Well, I can't be sure this is mating behavior, but it sure looks like it:


It could be a couple of males chasing a female, or it could just be animals fighting over the food supply in the yard as their natural sources become depleted in late winter.  Either way, it's fun to watch, and the timing is about right for mating:  Gray squirrels usually give birth to a litter of 1 to 4 blind babies in March after a gestation period of 44 days.  [Ref:  New Hampshire Nature Notes, Hilbert R. Siegler, pg. 105]  Did you know that squirrels are considered a game animal in some states?  Hunting of gray squirrels was banned in New Hampshire between 1915 and 1935 but is now allowed from September 1st through December 31st.  [Ref: ibid]  I did find one small snack that some animal squirreled away in a little hidey-hole. 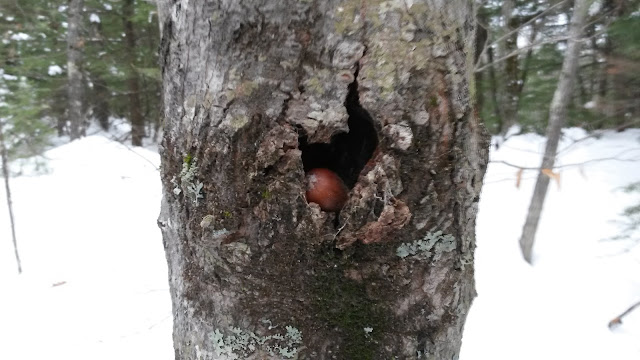 I wonder if the owner will ever come back to claim it.  Or if an oak tree will grow out of the middle of a Maple.  Now that would be something to ponder if one came across such a sight ten years from now.


It was cold at the end of the week, but we are into meteorological spring now, and one can feel it in the warmth of the sun, even on those crazy days in late February when the temperature hit 60 degrees.
It won't be long now....
Posted by Scott Powell at 6:50 PM No comments: