The harvest season has begun, which is appropriate, as it has felt like fall the past few days, cool, bright, and dry.  Some harvesters have begun collecting the smallest items of the autumn crop as the pollen flies all around.

It's good thing bees aren't allergic.
The largest animals are also collecting the fall bounty;  the bear has completed the removal of the black cherries, bending over the flexible trunks and stripping off all the fruit.  It also rolled a rotten log right into the middle of the trail to extract the bugs from underneath.

The least it could have done was clear the table after its meal and roll the log back off the trail.

The large quantity of ground-based insects this time of year - ants, crickets, grasshoppers, etc. - make it a good time for snakes to be born.  I found this new-born garter snake slithering around the wood chips near the house.  (Garter snakes are ovoviviparous, meaning they give birth to live offspring rather than laying eggs as most reptiles do.) 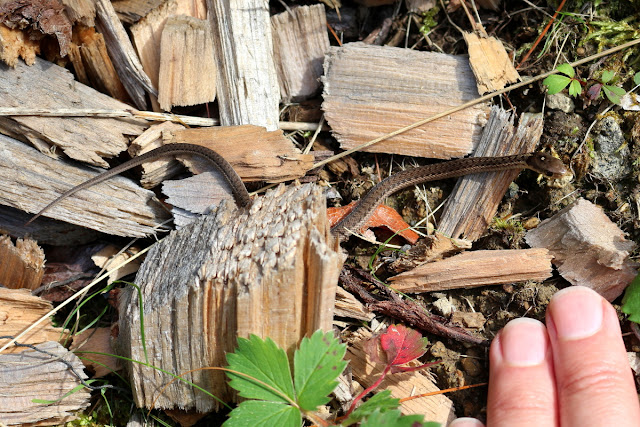 The new moon that blotted out just over half of the sun on Monday will, in two weeks, also follow the harvest theme as the September full moon is known as the Harvest Moon.

We were fortunate enough to have clear skies during the entire period of the eclipse.

Well, I guess I can't put off the sad news any longer:  Tardy is no longer part of the Lake Wicwas community.  The first indication came on Wednesday when I heard news of a long period of awful, mourning loon calls, which was described as sounding like a parent who lost a child.  Then a careful loon watcher reported that the chick had not been seen for a couple of days, even though there was a pair frequenting the waters where the nesting family had usually been seen.  Next came a report of a loon swimming around for 30 minutes with a minnow in its beak, as if searching for a chick to feed - that sure sounded like a animal with parenting hormones in play.  So yesterday I went on two searches for the family, and on the second I found the banded female in close proximity to (presumably) its mate, with no chick to be seen. 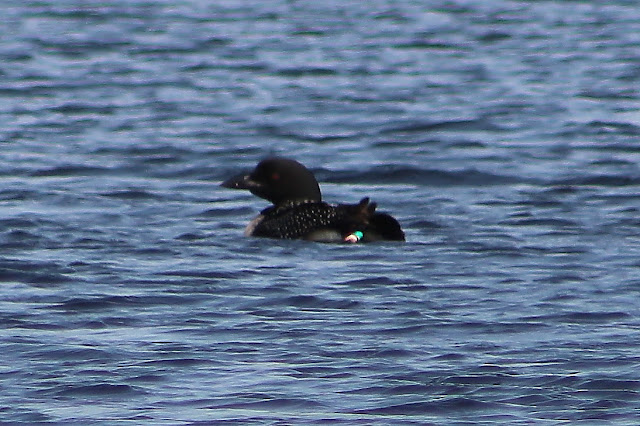 There have been many eagles seen circling over the loon family, so that is a likely cause of its demise.
There are other possibilities, including turtles and other loons, but unless a body is recovered, we'll never know for sure.  Two years ago when we lost both chicks, one of them was found with a neck injury indicative of attack by another loon.

At least mom and dad appear to be fine;  mom must have been hungry after all that work raising and defending a chick, as she caught herself a tremendous meal. 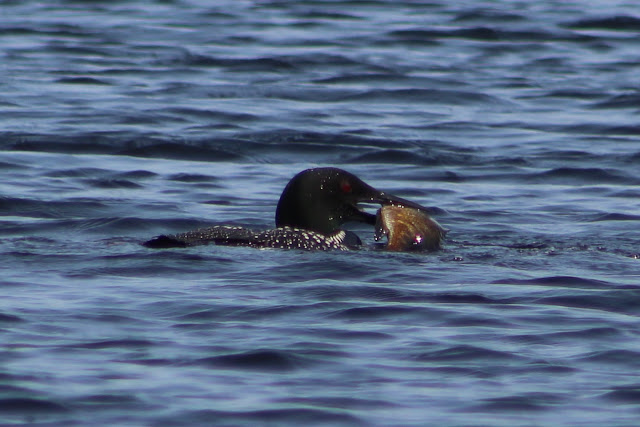 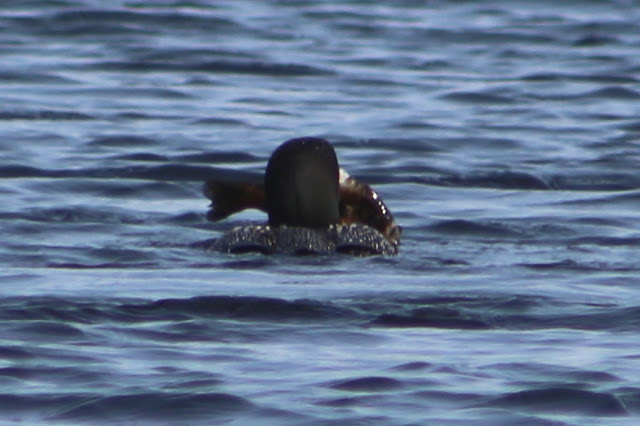 Either that or she was consoling herself with the loon-equivalent of a pint of Ben and Jerry's.

She spent a long time catching and releasing this large fish, tiring it out before swallowing it.  Here's the whole sequence: 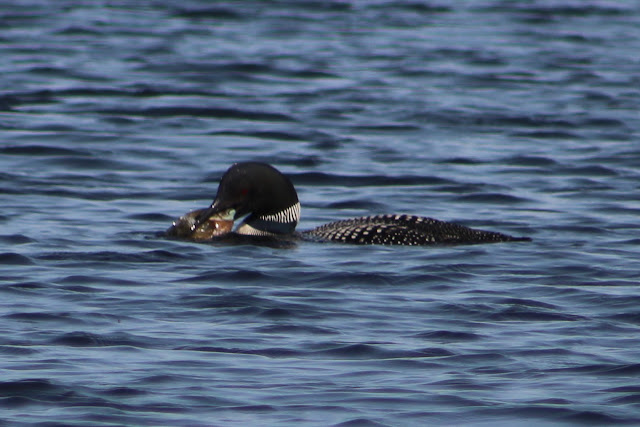 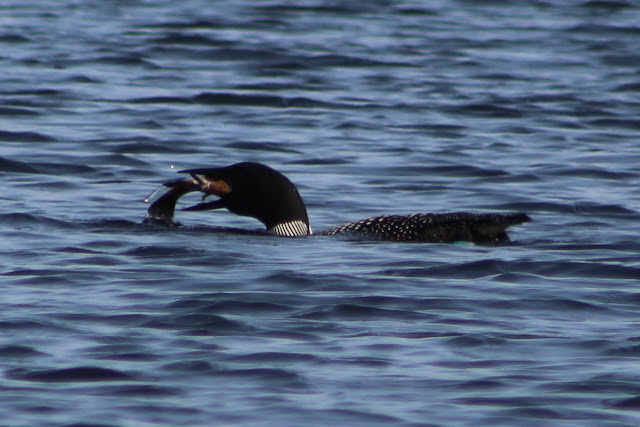 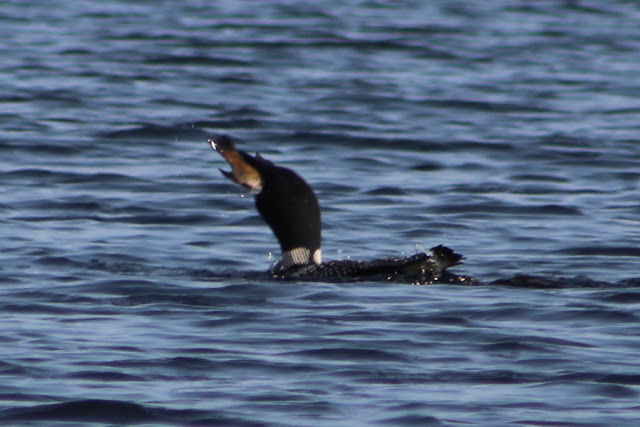 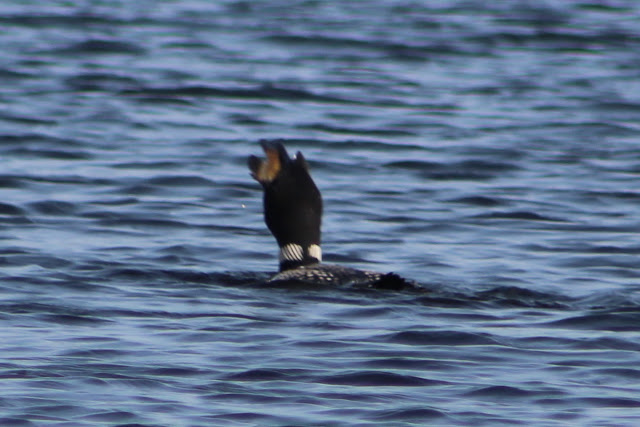 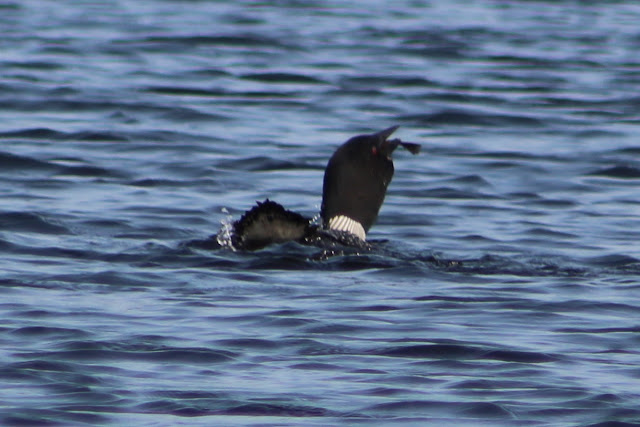 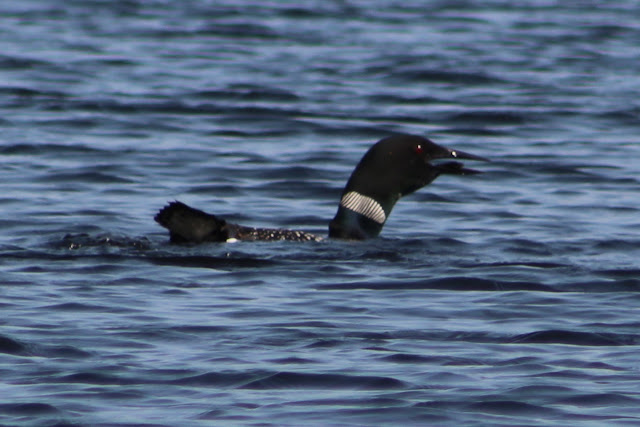 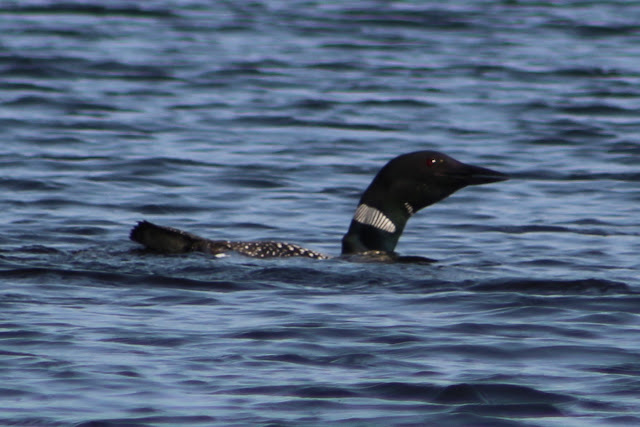 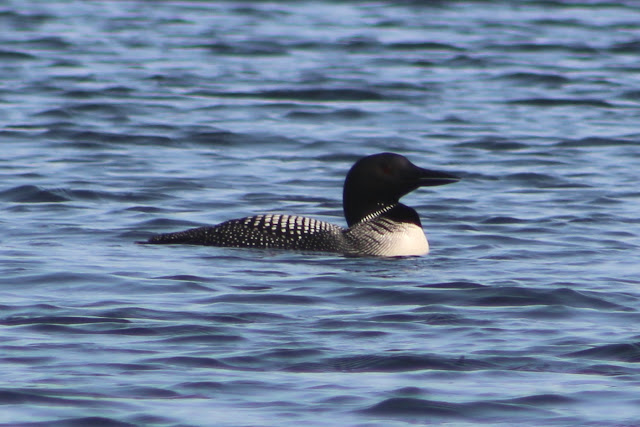 I guess we'll just have to try to enjoy the harvest season without our little Tardy.

Posted by Scott Powell at 2:12 PM No comments:

We'll start with the good news:  Tardy continues to thrive and grow.  I saw Tardy with dad one morning, and this time it was mom who was fishing in the rain.
Another day Amy Wilson caught Tardy hitching a ride on one of the parents.
And also a great shot of Tardy stretching those small, but growing wings.
Think those wings will be large enough to fly to the Atlantic Ocean in November?

It takes some brave parents to raise a loon chick.  I've had several reports of eagles soaring overhead, drooling over this tasty delicacy floating right out in the open; only diligent protection by the parents keep them from attacking.  Amy experienced one of these moments, and caught these great pictures:
Of all the loon pictures I've seen, I don't ever recall seeing one where a loon is looking up - thanks Amy for sharing these beautiful photos!

This next one appears to be a juvenile heron - perhaps it was one of the chicks in the Arbutus Hill Rookery back in June.
Now for the sad news:  one of the only, and perhaps the last, of the Black Tupelo (Blackgum) trees on the shores of Lake Wicwas has become a victim of the ever-growing beaver population. 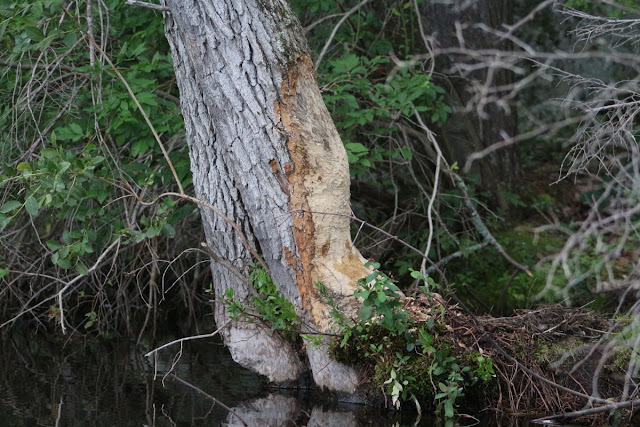 The Lakes Region is at the northern edge of the range for blackgum so they are not common here, and being such beautiful trees - especially in the fall when they turn bright crimson - it's sad to see this go.
Even if the beavers don't come back to finish the job it has probably lost too much of its bark to survive.  It is already turning red as it declines in strength.
But we'll end back on a happy note, with another beautiful tree that brightened our world back in May with its large white flowers.  The Hobblebush Viburnum is now displaying contrasting polka dots of intense red and black all along the edges of trails and roads throughout the Lakes Region. 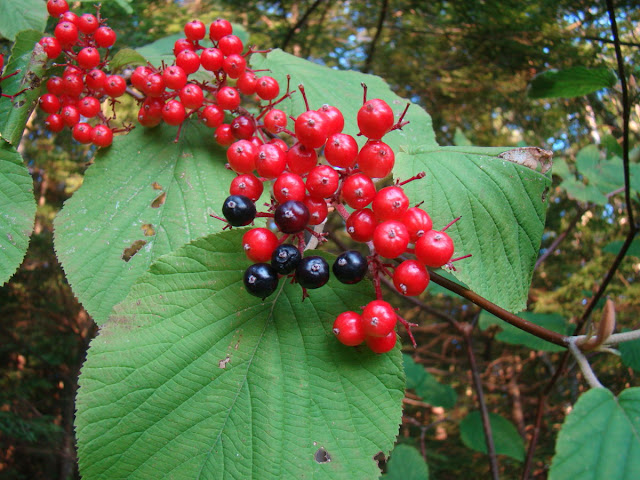 Nature is a world of give and take.  I guess I'll take what it gives me.

Posted by Scott Powell at 8:21 PM No comments:

It was another busy week on the lake with water testing, paddling, barbecuing, and loon raising.  On Monday our ever-reliable lake volunteers took two interns from the NH Department of Environmental Services (DES) out on the lake to collect water samples for the annual water quality assessment.
Samples were taken at four locations around the lake and at varying water depths, including the deepest spot of the lake at 38 feet.  Testing will include properties such as dissolved oxygen, phosphorous, acidity, e-coli, and turbidity (visibility).
It will take several weeks to analyze the samples, and the results will be posted on the Lake Wicwas website.  You can see last year's report here, and review ten year's worth of data on the website. There is a wealth of additional information available at the NH DES website.

Of course, even when doing the important business of collecting water samples, the highlight of the day was seeing the loons and their chick!


The combined Lake Wicwas Association Annual Paddle Regatta / Lakes Region Conservation Trust Guided Paddle was held on Saturday which provided near perfect weather for a paddle: calm, overcast skies, not too hot.  The group toured all four of the recently conserved properties, and we were even escorted by one of the generous property donors.
We were fortunate enough to see a Great Blue Heron on the Harris Conservation easement (near the Blue Heron Lodge no less), the loon family near Bryant Island, and a group of four loons congregating in the middle of the lake on the return trip. 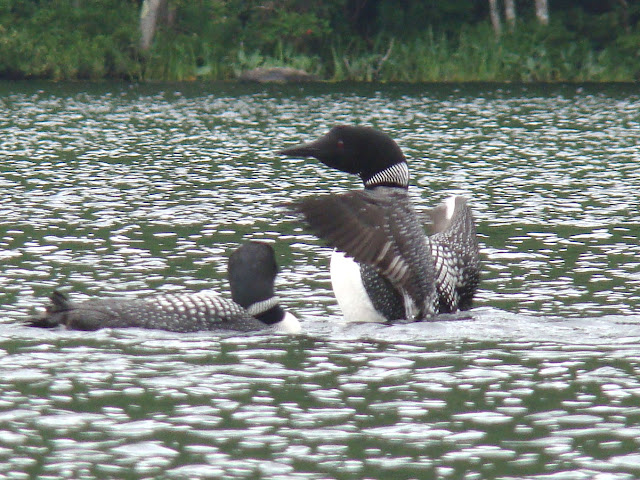 My thanks go to those who supported and participated with the tour!

Following the paddle was the annual Lake Wicwas Association barbecue, hosted again by the very generous Blake family.  It was another great event with many lake members enjoying the opportunity to catch up with friends old and new, along with devouring some great eats!  If you missed it, be sure to put it on your calendar for next year.  Many thanks go to Lavon and Wayne for hosting and being the star BBQ chef!

Now an update on Tardy:  At 12 days old all seems to be going well.  Both parents are spending a lot of time fishing for the little one.  On one occasion we saw father fishing while mother stayed close to Tardy, keeping her or him safe.
We could tell it was mom because she was preening and oiling her feathers while she supervised, occasionally showing us her bands.
Once father brought up a fish that was just a bit too much for Tardy.
The next offering was more to Tardy's liking.
Tardy is still pretty little, but with all this attention, he/she is growing quickly.
It was just the second of what will be many busy weeks for this family. 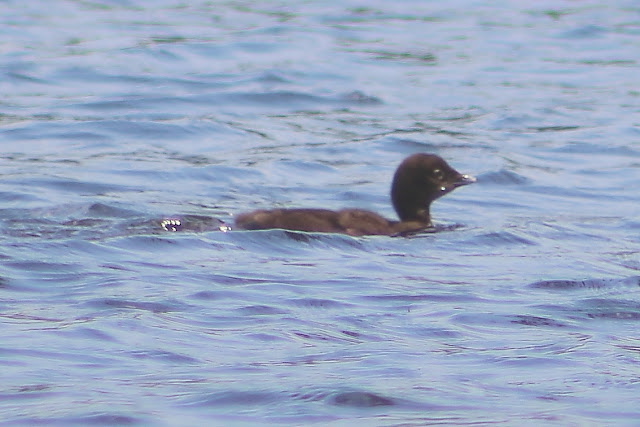 Posted by Scott Powell at 3:04 PM No comments: