Wow, it's getting cold around here.  After a beautiful treat of Christmas snow on Monday, the mercury took a plunge and hasn't recovered yet.  The overnight lows weren't too remarkable - the lowest being 9.2 degrees below zero - but even with full sun things just aren't heating up much during the day.  On Thursday the high was 2.1 degrees, an increase of only 6 degrees from that morning's low.


And it's been like this for a week now, which is hard on our furred and feathered friends.  Birds have to consume large amounts of calories every day, as in this kind of weather they can lose up to ten percent of their body weight in a single night.  Mammals can hide out for a day or two but after that they also have to get out to find something to eat.  It's been cold enough that water vapor coming up from the red squirrel's hidey-holes is condensing and freezing into ice crystals.
Proof that it hasn't risen above freezing for days is provided by ice on the trees from the freezing rain event back on December 23rd. 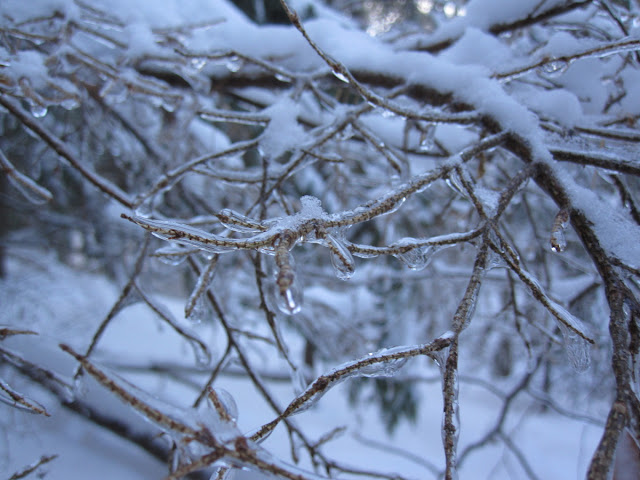 And there's no indication it's going to melt any time soon. 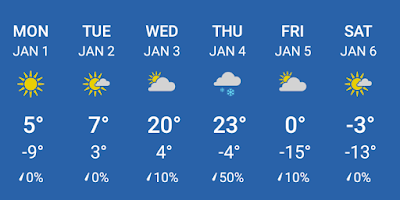 
Being the final day of 2017 I thought I'd look at back at some of the more memorable moments around the lakes this year - here are a few of my favorite things (a la Julie Andrews) from our last trip around the sun.

Here's wishing everyone a great New Year from Lake Wicwas! 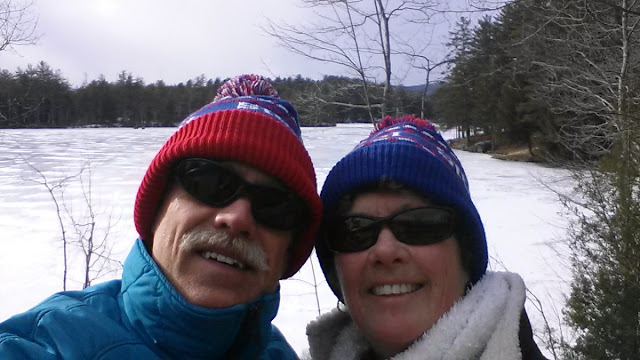 Posted by Scott Powell at 8:45 AM No comments:

Astronomical winter arrived on Thursday morning at 11:28 am, the moment when the northern hemisphere receives the least amount of sunlight due to the tilt of the earth's axis of rotation and its orbit pointing the north pole away from the sun.  I decided at the last minute - since it was such a gorgeous day - to watch the solstice from the summit of Red Hill in Moultonborough, so took a quick hike up the summit.  Here's the view at 11:28 am.

Being so close to noontime, this is also the highest the sun rises this time of year, quite a bit different from summertime.

Remember, the tilt of the earth doesn't change over the year, just its orientation to the sun as we travel around our energy source.  Here's a depiction from the Encyclopedia Britannica.

It was a beautiful blue-sky day, clear enough to see the windmills on the mountains behind the old Tenney Ski Area, which is planning to open this winter after being closed for many years.  You can see some of the restored ski trails in the left third of the picture. 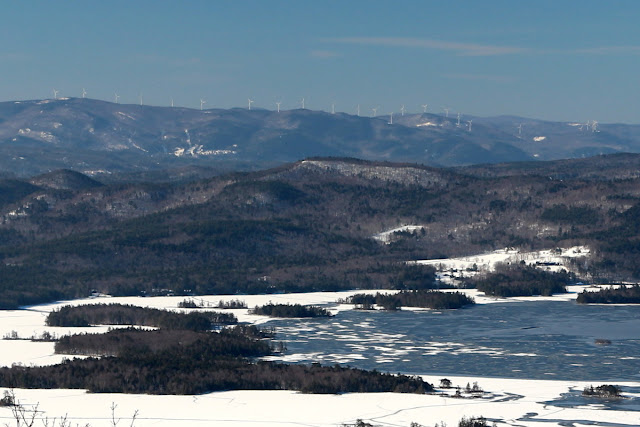 We've been getting regular snow falls to keep the snow lovers happy - at least until yesterday's rain which really messed things up.  But the forecast is for more snow tomorrow to freshen things up again.


Back at Lake Wicwas the ice is now thick enough for skiing and I have seen tracks of others out on the ice, though I personally haven't yet ventured across the areas of the lake that were last to freeze up. 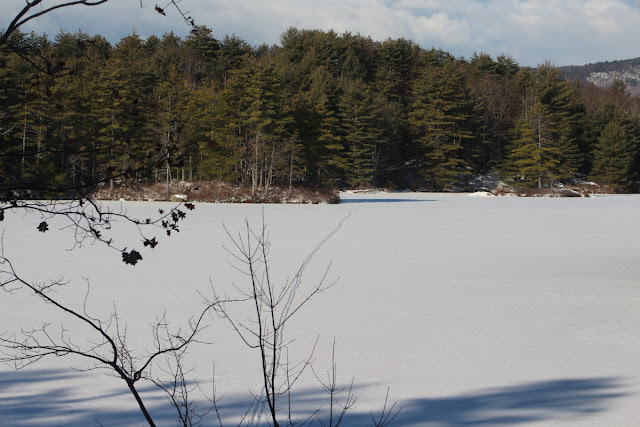 I've also seen fox tracks on the ice for the first time this year;  somehow they seem to know when it is safe without benefit of cutting a hole.  I'm always amazed at how quickly the fox will take advantage of ski trails to ease their travel across the snow.
The fox is all about conserving energy, which makes sense considering it spends its life cruising the forest in the cold and dark of winter in search of a tiny morsel of protein to survive.  The small amount of energy saved by walking in a packed track, multiplied by 20,000 steps a night, is a big advantage to its survival.  That's also why it evolved with a perfect direct-register gait where its hind foot falls directly on top of where its front foot landed, and why its mate will follow exactly in the lead fox's trail.

I read an article recently (thank you JS!) about someone tracking a fox up the Champney Brook Trail on the north side of Mount Chocorua.  He observed that the fox completely ignored the track of every mouse that it passed by, it's perfect gait not having the slightest hitch meaning it didn't even turn its head to consider following the trail.  Yet at another spot it stopped dead in its track with no sign of activity anywhere.  It then turned off the trail, walked in a much different pattern - slowly and quietly - before pouncing down into the snow.  There was a lot digging, but no signs of a capture, and then the trail continued on.

The explanation the author gave was that if a fox followed every track it saw or smelled, it would consume far too much energy chasing old, non-productive trails.  It doesn't even bother to look at these.  Instead, the fox hunts by sound, listening for definitive proof that its prey is present.  Trotting silently through the snow, it will hear a mouse scratching around under the snow looking for seeds.  It will stop, circle around the spot, and use its sharp hearing to pinpoint the exact location of the sound.  It then quietly approaches and pounces down, hoping to catch the animal with its paws.

It's a clever energy-conserving scheme developed over thousands of years of evolution.  I have only seen evidence of this myself once, on the trail up to Crockett's Ledge;  think about how many miles a fox much cover in a frigid night to find enough nourishment to live for another day.  But we know it does, as right on the trails one finds proof of a fox's hunting success. 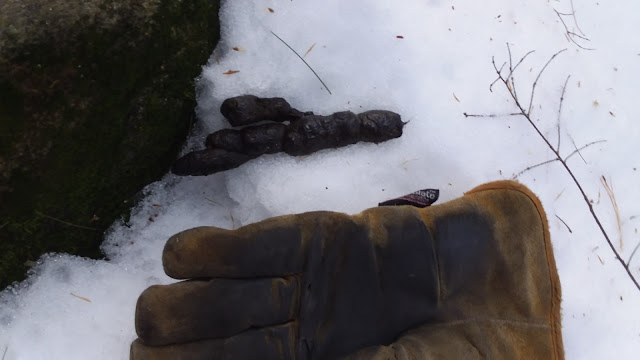 I hope everyone has a peaceful Christmas tomorrow with family and friends, and remember, with the solstice behind us, we're already on the road to summer!

Posted by Scott Powell at 7:47 AM No comments:

Winter is here, and signs of winter fun are starting to appear. 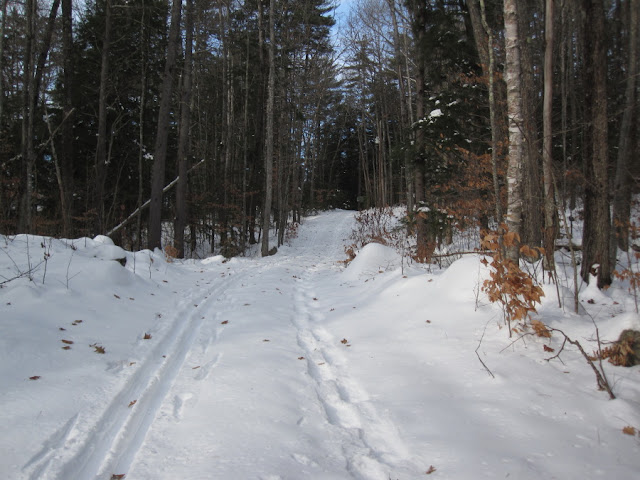 I don't think the animals in the region think it's a lot of fun, but they are also out leaving their marks in the snow.  This week I saw mouse, squirrel and deer tracks in the light, dry snow, but thankfully no bear tracks;  I expect they are all bedded down now, with the overnight lows falling to near zero.  The red squirrel tracks are easy to identify as they burrow out from under snow and make highways running from tree to tree.

Another animal highway was visible in the lake before the latest snow fell:

The beavers had made a path by travelling back and forth between two lodges, including their food supply stashed at one of the lodges.

Because mice have so little mass their tracks are visible only when the snow is extremely soft and fluffy.
Soon they won't venture on top of the snow much at all - they will tunnel down below it whenever they can to stay out of sight of the owls.

The bright snow brings out details that I wouldn't see otherwise, such as these woodpecker trees I hadn't noticed before. 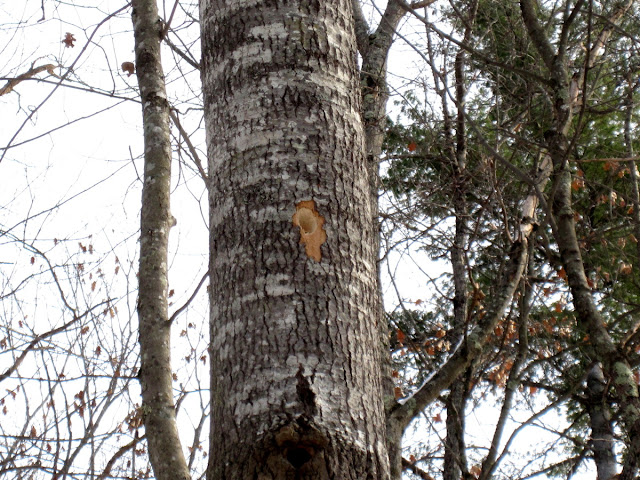 And the still-flowing streams stand out in stark contrast to the fresh snow. 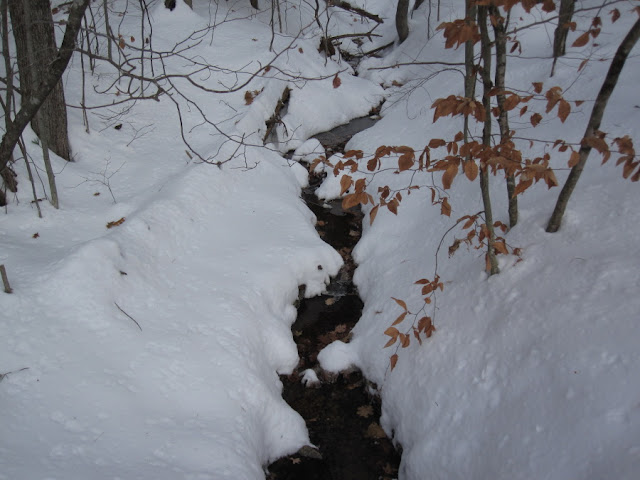 The red berries of the winterberry have been noticed all fall, and a few wintergreen berries are showing through the snow where they are protected near the trunk of a tree, both providing a bit of Christmas Red to go with the green of the pines, spruce, and hemlock needles.


It looks like the cold weather will hold at least another week so we should be having a white Christmas this year - I hope to see you out enjoying the beauty of winter over the holidays! 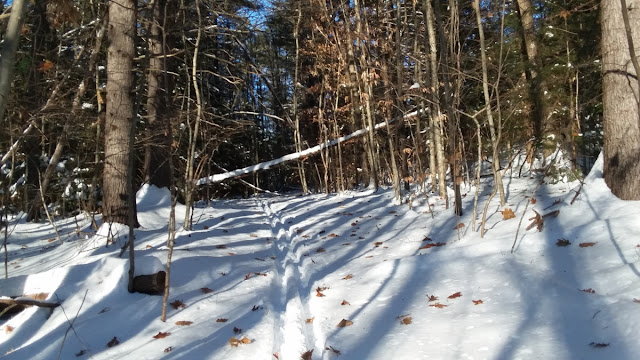 Note:  Ice-in on Lake Wicwas occurred on December 12, an average date, and much earlier than last year.  The ice in one cove is currently 6-1/2" thick, 4" of black ice under 2-1/2" of white ice.  I wouldn't trust the ice yet though, as there was open water only a few days ago.  Keep an eye on the ice fishermen - they tend to cut holes as they go, so have a good idea of where and when it's safe.
Posted by Scott Powell at 9:30 AM No comments:

The first real snow of the season fell yesterday, and it immediately transformed the world into a winter wonder land. 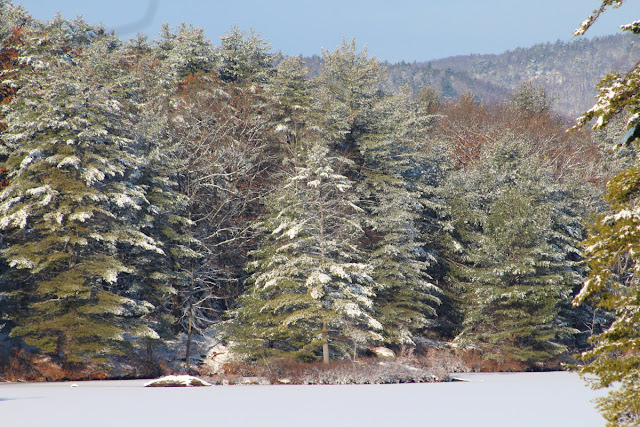 It's nice to have winter arrive, but why does the snow always seem to come just as the ice is almost ready for skating?  The calm weather this week had allowed the lake to spread a perfect layer of smooth ice just before the snow fell.
But we'll take the snow (is there a choice?) and it sure does make everything look pristine.


With the snow the bird feeders came out, both because the birds can use it with much of their food supply covered up, and because we'll be able to see if the bear is still active.  It didn't take long....

I can't wait to get out after the first snow to see what's been out and about in the world, and sure enough, even coming home from the concert last night there was already the trail of a fox trotting down the road in the still-falling snow.  This morning there were mouse prints in the snow by the stone wall where it has its nest.
And right next to them, the landing mark of an ermine where it dropped down looking for a meal, but there was no sign of a capture, at least at that location.

I found the track of a coyote as well.

And saw where it ventured to a small stream for a drink. 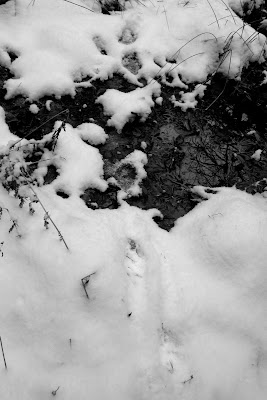 So, we may have missed the skating window again this year, but I'm looking forward to the season of observing animal tracks, and at least we should be able to get out on the skis soon!


Posted by Scott Powell at 7:53 PM No comments: