It's a long ways away, but smoke from the fires in the west has made it all the way to New Hampshire.  We had a nice hike with friends up Red Hill (thanks B&T!) and from the fire tower at the summit (rather fitting) the haze was thick enough to reduce the visibility by half from what it should have been based on the temperature and humidity.

Yesterday morning, a little closer to home, the view west from Wanakee Hill (just west of Lake Wicwas) was almost as bad.

But the smoke does make interesting sunrises as the particles in the atmosphere absorb and reflect the shorter-wavelength blue light, lending a nice red color to the morning.  (Read more about atmospheric optics here.)

Still on the topic of the sky, after last weeks discovery of a hemlock struck by lightning, this week I found another tree that was even more devastated. 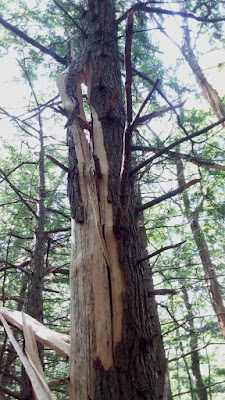 Seeing chunks of wood six inches thick blown out from both sides of a large tree is impressive. 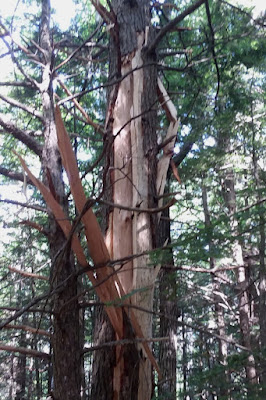 Much lower down in the understory of the forest the fruiting trees are doing their part to sustain the animals through the winter.  The hobblebush, which a few weeks ago had bright red berries, are now ripening into a shiny dark black color.

I've seen a few green acorns start to hit the ground, and the black cherries, which have been ripening for a few weeks now, are clearly being enjoyed by the local fox population.

These are signs we're well into late summer now, a transition I'm sure residents and firefighters in the west can't get soon enough.  Perhaps some cooler weather and rain will dampen their fires, and allow our skies to clear up in time for crisp blue skies to return for the fall hiking season.

Posted by Scott Powell at 12:34 PM No comments:

It was a busy weekend on Lake Wicwas as the 9th Annual Paddle Regatta took place on Saturday, followed the annual picnic and barbecue.

The forecast was for scattered showers all day, but they held off long enough that both events went off without a drop.  The questionable weather made for a smaller turnout for the paddle, but as usual, the award for the best decorated boat went to the Naso's patriotic entry. 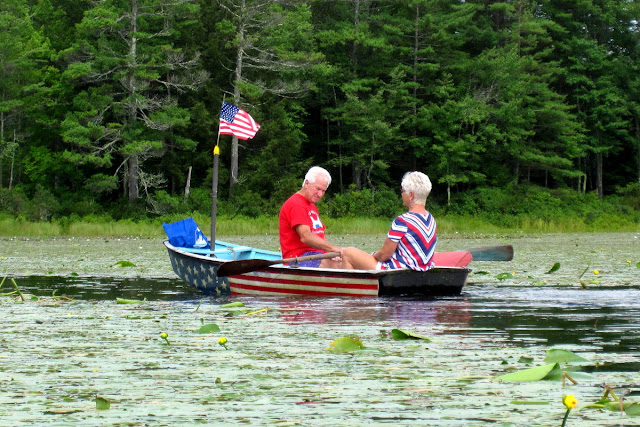 But the weather didn't reduce the barbecue turnout, and Wayne and Lavon hosted yet another great event.
Many thanks to the Blakes for hosting, and for everyone who brought all the delicious food!

A couple of weeks ago the Lakes Region was pummeled by some strong electrical storms, one of which came right over Meredith with several ground strikes very close to Lake Wicwas - we knew they were close not only by the concurrent thunder and lightening, but also by the sizzling of electricity in the house.  One strike was close enough to take out our television, even though it was unplugged!  The unit still powered on and had a picture, but none of the input ports (HDMI, etc) were functional.  We hadn't disconnected those cables, so the surge must have been strong enough to come along those lines and fry the electronics on the board.

Later in the week I noticed some bits of wood on the ground near our house, so I looked up to find what tree a woodpecker had been tearing apart.  But instead of finding a rotting snag, I found a solid hemlock with a long strip of bark missing - the tell tale sign of a lightning strike! 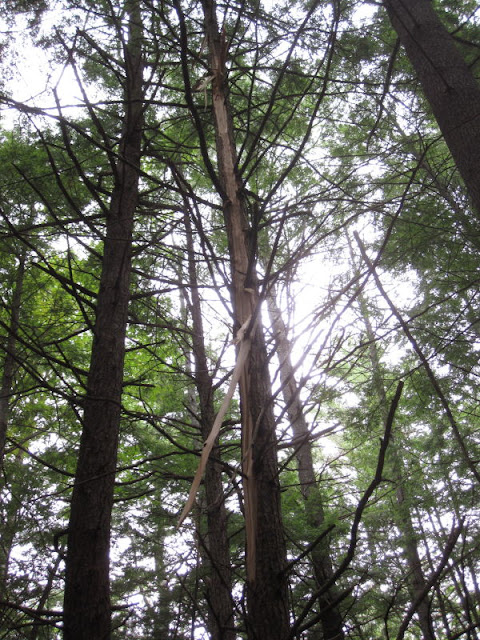 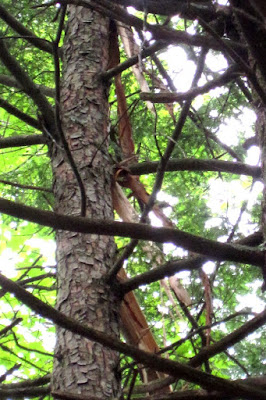 There were long strips of bark still attached to the trunk, but clearly blown apart by the explosive power of moisture instantly vaporized by electrical current travelling through the moist layer of cambium under the bark. 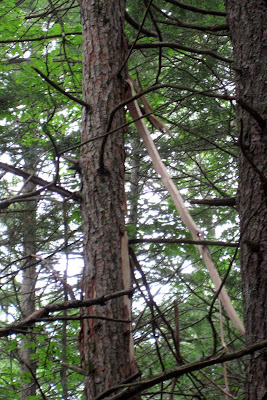 Looking around a bit more I found chunks of hemlock 2 inches thick and several feet long blasted over 50 feet away from the tree.

There were other hunks of wood blown off the trunk but arrested by branches on the tree. 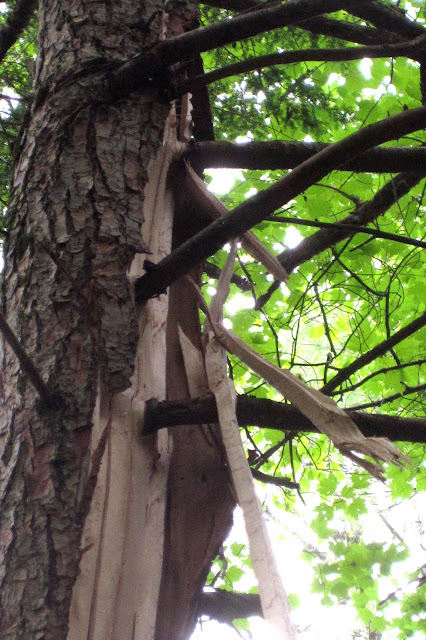 The whole scene was a powerful reminder of the forces of nature.  And why you don't stand under a tree in a thunderstorm.

I'll close with a raptor I saw on the way home from Lake Hosting this morning, which I believe is a Broad-winged Hawk.  It flew over me and I was quick enough to catch it as it flew by. 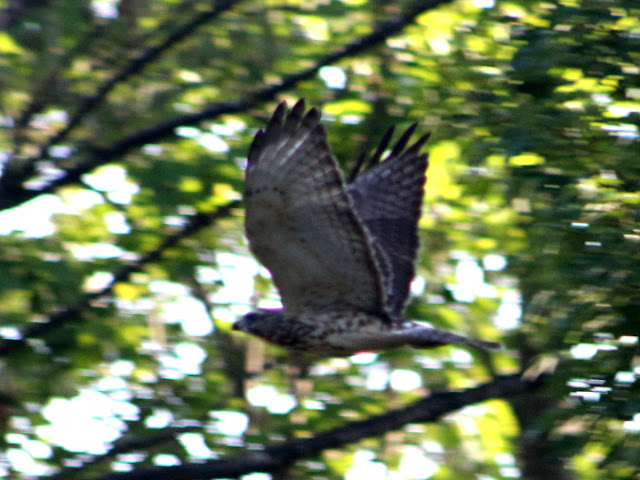 It landed on a near-by tree to pose for a couple of pictures before it took off again. 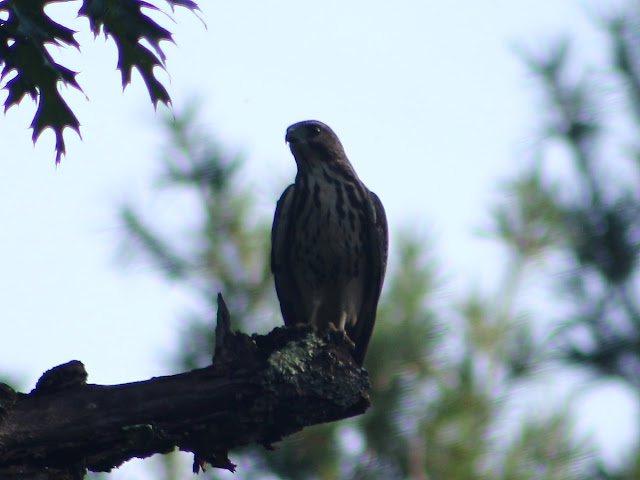 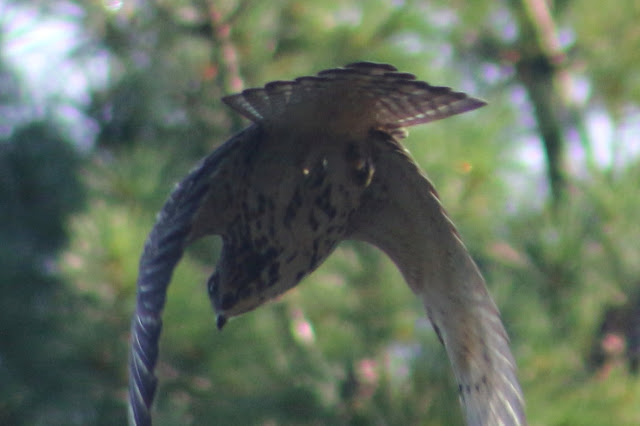 I guess he wasn't perched in that hemlock when the lightning struck.
Posted by Scott Powell at 7:01 PM No comments:

Meredith is celebrating it's 250th anniversary in 2018, and this week was packed with events.  On Tuesday the Meredith Historical Society sponsored a presentation on the History of Bear Island, on Thursday the Greater Meredith Program unveiled the New "Archie" statue, and yesterday the town sent a great parade down Main Street and back up Daniel Webster Highway. 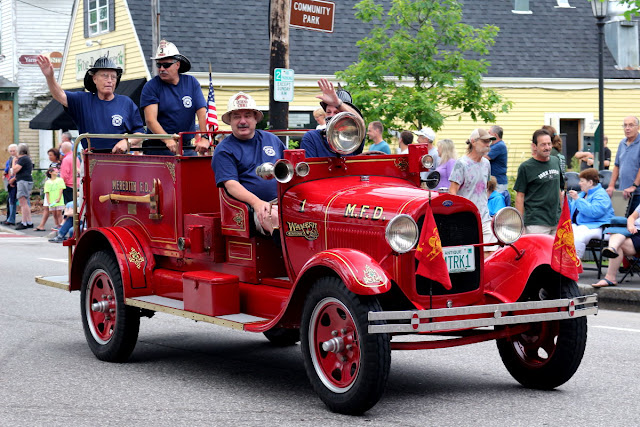 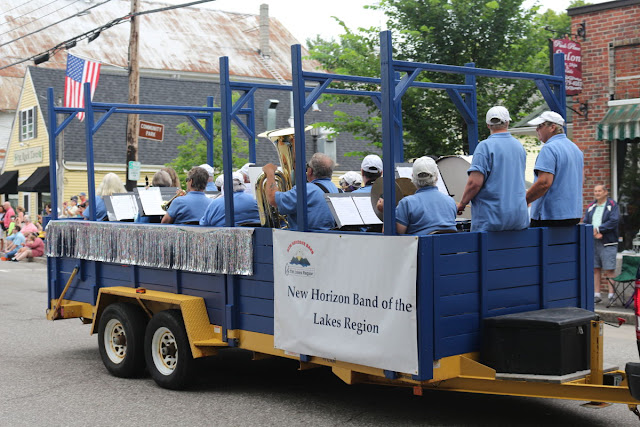 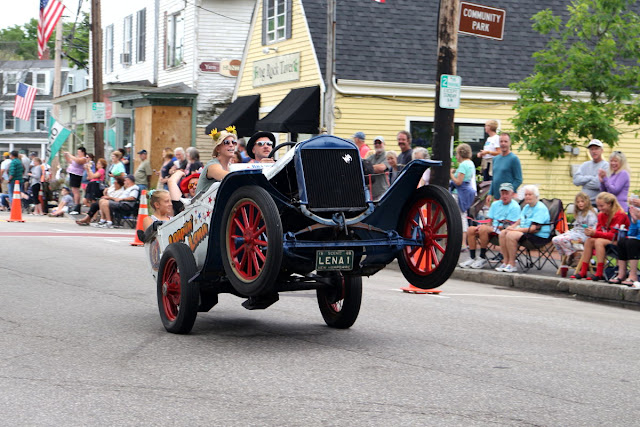 It was fun a week, and good to have lots of excitement to offset more sad news back on Lake Wicwas.  It appears that our second loon chick, Sam, has succumbed to the attack of other loons.  The first indication we had was a single loon swimming quickly around the cove multiple times with its head on swivel as if searching for a lost chick.  We can't be sure of the culprit, but the parents have been fending off at least one rogue loon all summer, and with how large Sam had become this is the most likely cause.  Furthermore, the Loon Preservation Committee's Lake Region Field Biologist Henry Stevens (who spoke at the Lake Wicwas Association annual meeting last week) reported that this year "the overwhelming cause of nest failure and chick death was intruding loons."
It is sad, but this is nature ensuring the survival of the fittest.  A more concerning issue for Lake Region's loons was noted in Henry's presentation at the meeting.  He stated that New Hampshire is at the southern boundary for loons.  It's sad to think that as the planet becomes warmer, driving loons farther north, future generations of Lakes Region inhabitants might never experience the haunting call of a loon drifting over the water on a calm summer evening.


On the other hand, some animals may become more prevalent, such as this pretty caterpillar.
New Hampshire is toward the northern side of its range, so it will be fine here as things warm up.  And this creature has some pretty amazing traits.  First, like the monarch butterfly, its preferred food is milkweed.  Did you know that milkweed has poisonous constituents called cardiac glycosides which affect the heart (thus "cardiac" in its name) and can be fatal to animals including humans?  [REF:  "Bug of the Week", Michael J. Raupp, Professor of Entomology, University of Maryland]  But the Milkweed Tussock Moth is unaffected by the poison, and in fact it consumes and stores the toxin in its body.  When a bird eats one of these caterpillars it immediately vomits, so predators quickly learn to leave these easily identifiable black and orange caterpillars alone.

And it gets better.  The toxins remain after the caterpillar becomes a moth, but at night, bats are the primary predator, and hunting at night, they don't have the visual cue to know not to eat them.  But this wily insect has also developed an organ that emits an ultrasonic sound that is detected by bats, so when bats have a similar unpleasant reaction after eating a milkweed tussock moth, they also learn to avoid them.  More information on this remarkable animal is at the link in the reference above.

One more animal item:  have you ever wondered why there are so may porcupines hit by cars?  Here's a clue: 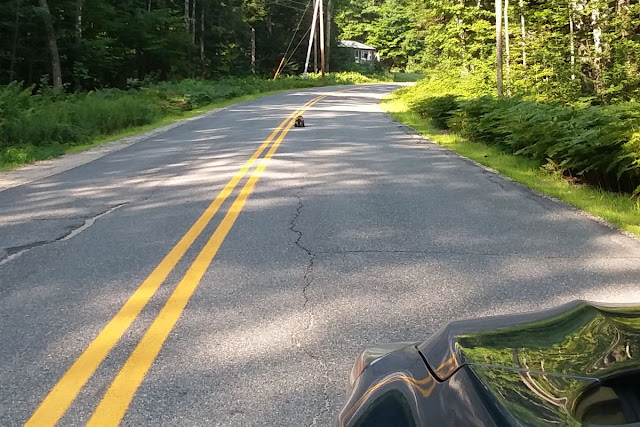 I saw this big porker just waddling down the middle of the road without a care in the world.  I stopped to watch, and it wasn't until I pulled up quite close before it decided to wander off into the bushes. 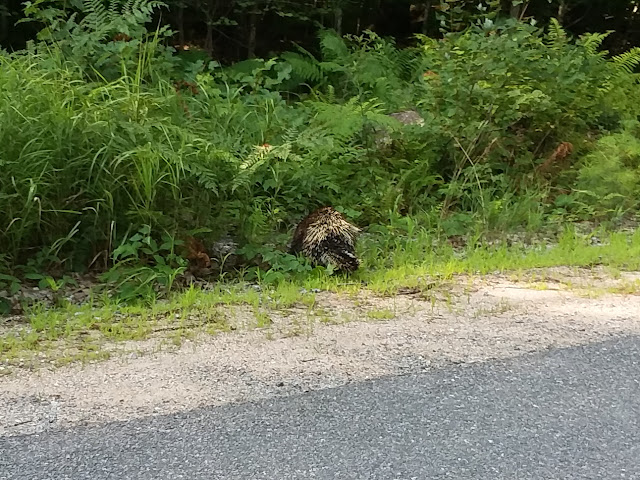 Porcupines know almost nothing (other than a human) is a threat to it.

Perhaps our loons should grow quills.

Posted by Scott Powell at 1:23 PM No comments:

Have you ever come across one of these pre-historic looking creatures?
This a millipede, and no, it doesn't have 1000 feet even though that's what "milli" stands for.  There are thousands of species of millipede around the world and even the most-footed species only has 750 legs.  Our local variety is made up of 50 individual segments, each of which has two pairs of legs (200 legs in total), which is why it is in a scientific class called Diplopoda.
According to Wikipedia Millipedes were among the very first animals to walk on the land, with fossils traced back 420 millions years to the Silurian period, and in those days they would be a little more intimidating:  they grew to be over 6 feet long.
Millipedes are great recyclers, improving soil quality as they consume dead leaves and other decaying plant matter.  In some regions millipedes may consume nearly all the leaf litter in the area.  These guys must have played a big role in creating the soil that lies on top of all the granite in New Hampshire.  They prefer wet or damp areas, as they need moisture to survive - compost piles are a favorite residence.

I found three of these big arthropods within a few feet of each other, making me think they had just hatched, but then I read that they hatch from eggs with only six or seven segments.  As they grow, they molt, adding more segments with each molt, so these big guys with 50 segments are mature.  At any rate, they are harmless to humans and great for the environment, so thank them when you see them in your yard and garden.

Back a couple of weeks ago I mentioned some arachnids that hide on flowers, blending in with the plant as they wait for their prey.  Last week I found some cool insects that have no intention of hiding on their flowers.
These Great Black Wasps contrasted beautifully against the bright pink Swamp Milkweed.


Little Sam, who isn't quite so little anymore, continues to thrive on a diet of ever-larger fish provided by it parents. 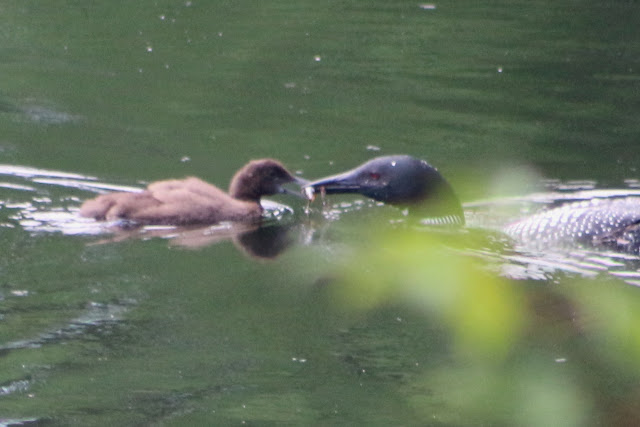 We are still seeing Sam with only one parent, but we don't know if it's always the same parent.  When they were taking their daily bath together I did get a good look at both of the parent's legs and neither had a band on it, so I do know the male is tending to Sam at least part of the time.
If I ever get a glimpse of a band I'll know that's the female.  (If anyone has seen any bands, please let me know; the female's left leg has a green band and a red/white stripe band, her right leg has a white band  and a silver band).

Sam may be growing, but he still has a long way to go before he's flying anywhere with those stubby little wings! 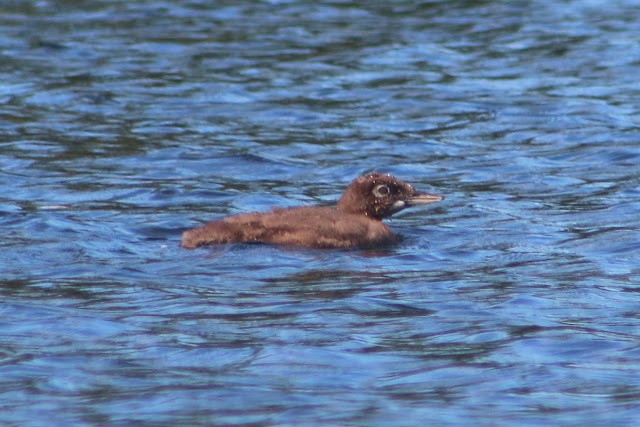 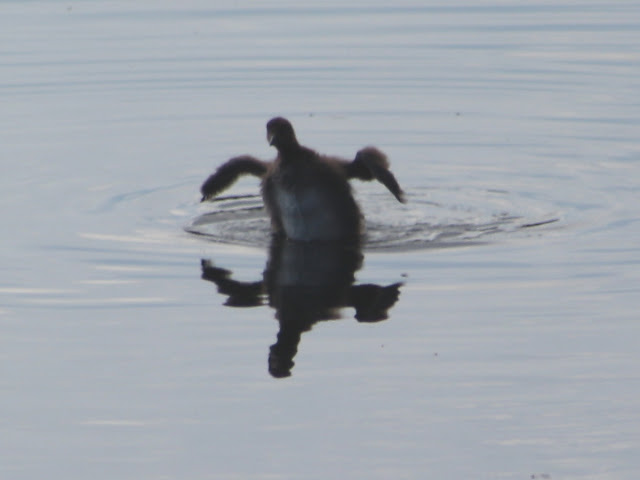 Posted by Scott Powell at 11:26 AM No comments: