Just a quick note:  I received a report this week that the barge has been removed from Bryant Island.  It looks like there will be no more work this fall.  We had some really nice weather this week, keeping the water warm enough to still be swimming - at least for the hardy souls.  It's still warmer than the water on the coast of Maine in the middle of summer.
Posted by Scott Powell at 7:41 PM No comments:

Red continues to be the color of the season.  Walking to Arbutus Hill Pond, I saw many Red Efts still on the trail, and bright red Swamp Rose hips are along the shore of Lake Wicwas.

I watched a Ruby-Throated Hummingbird collecting nectar from several stands of red (cultivated) flowers, spending a long time going from blossom to blossom.  And then of course, there is this harbinger of things to come: 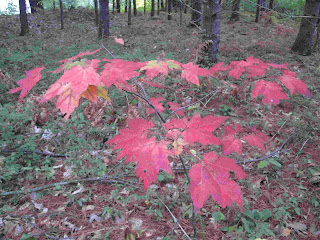 In Arbutus Hill Pond there was a large group of ducks, over a dozen.  There are several heron nests there; I didn't see any herons in Arbutus Hill Pond, but I did see one later in Lake Wicwas.  There were also quite a few ducks in Lake Wicwas - where I have seen flocks of ducks preening, there have been dozens of feathers floating on the surface.  This feather, with distinctive markings, and the autumn sky reflecting off the water was special. 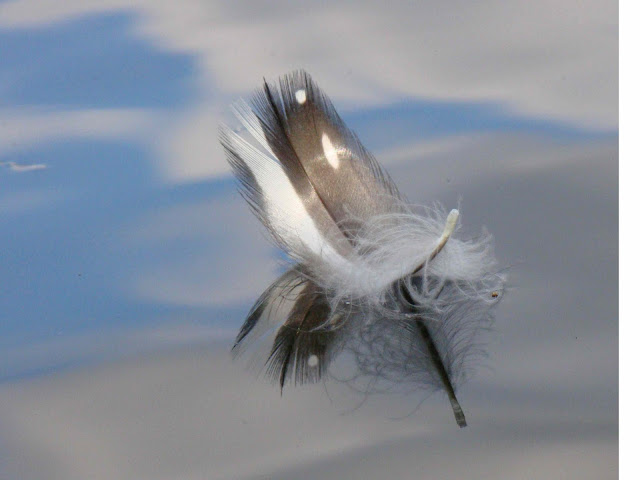 Near shore I saw this young Northern Water Snake - they are much more colorful when young, as they become darker, almost black, as they age.

The water in Lake Wicwas is extremely clear right now.  This is probably due to the lack of rain this year, including thunderstorms, which wash silt into the lake.  But I believe the lake has also become much clearer in general over the years.  When I was a kid I remember noting how brown the water was in the turbulence behind a motor boat.  Today the water appears more blue-green.  It is still a far cry from the clear blue of lake like Winnepesaukee, but it's a significant change over 40 years.  I expect much of it is due to the settling of the washout from the logging that was done in the first half of the 20th century.

There are still signs of logging evident in the lake today, including remnants of the sawdust pile at the southern tip of the lake, and the logs that float up to the surface every year.  These remnants from logging have been waterlogged for years, slowly decomposing at the bottom of the lake.  As they build up gas in the wood, they eventually become less dense, and when they equal the density of water they float up to the surface.  They are never perfectly balanced though, so one end floats up first, presenting quite a hazard to boats as they float with one end right at the surface.  Or sometimes the heavy end gets stuck on the bottom, and the lighter end lurks just below the surface.  There is evidence of one of these taking its toll on a boat, as a single propeller blade is deeply embedded in the top of of these vertical logs about 30 feet from the western shore of the lake.

Several of these logs floated to the surface in 2010, and good Samaritans dragged them over to the boat landing to remove them from being a hazard.
Linda was brave enough to put the bird feeder back up, at least during the day while we can watch it, and within two hours we had the usual mixed flock, including several good size Hairy Woodpeckers.
This Black-and-Yellow Garden Spider was hanging upside down in its web, waiting for unsuspecting insects to fly in.  I expect the dots on its abdomen serve as a self-defense feature, appearing as eyes to keep birds away.  It won't be long before they are gone for the season.

The lake is still warm enough for hardy souls to swim, or even windsurf, as I saw on Saturday afternoon.  There are still plenty of boats on the lake, and lots of opportunity for more great fall weather. 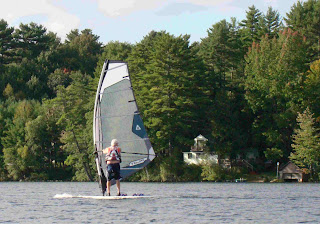 Posted by Scott Powell at 11:39 AM No comments:

Summer is hanging on, but signs of fall are everywhere.  Saturday was a perfect September day, and I got in one more ski trip; the water is still as warm as in July.  I saw many ducks on the lake again this weekend, including a beautiful Wood Duck.  As I came around a point in the kayak, four or five ducks flew off, but one brightly colored male stayed behind, crouching down low against the shore.  But I as raised my camera, he took off also.  This is all I got: 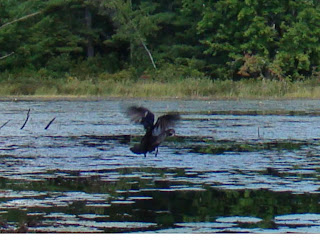 The lake level is a little low, about minus two inches at the dam, but not bad considering how dry it's been.  The lake level has been managed very well lately.  The water level is about three inches below the top board in the dam.  The low water has revealed lots of mud flats in the marshes, and there were many turtles out sunning themselves on Saturday.  I found this Solitary Sandpiper digging on one of the mud flats.

It's the season of red berries.  The wintergreen has ripened and its bright red berries are visible all around the shores of Lake Wicwas.  These will stay red into winter, and provide a good food source for many birds.

The Partridgeberries are also ripe, but much less ostentatious, hiding amongst the leaf litter on the forest floor.  Both are signs that fall is here.

Red isn't the only color though - I found these large clusters of blue berries at the dam on Meredith Center road.  They have a large woody stalk, with very strong stems holding the berries.  With Emily's assistance, I learned they are Smooth Carrion Flower.  Between the leaves and the berries, they are the food of Bear, Deer, Cottontail Rabbit, Turkey, Ruffled Grouse, and other animals - just another attraction for the diverse fauna around Lake Wicwas.
Linda found these delicate blue flowers right on the shoreline - I don't know what these are either - any ideas? 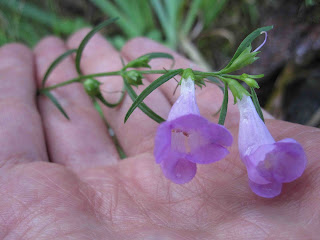 Linda also saw the three fawns last week, as well as a fourth fawn with them, but only saw one doe.  Other than the birds, including several wood peckers hammering in the forest, and lots of turtles sunning on the mud flat, I didn't see much wildlife this week.  But a large member of the weasel family came by the house, leaving a large twisted scat to mark his presence.  Being over a 12 inches long, and full of hair, I'm guessing it was a Fisher.
Alas, another clear sign of fall:  we took out the dock today.  But the boat and kayaks are still in for fall tours around the lake.
Posted by Scott Powell at 9:17 PM No comments:

There was a lot of activity around Lake Wicwas today, as cooler temperatures arrived.  Although with yet more hot weather this past week, the lake is as warm as I can remember it ever being on Labor Day, even with the holiday being so late this year.  It is more like July than September.  This morning, the still cool air over the warm water showed a lot of mist rising off the lake. 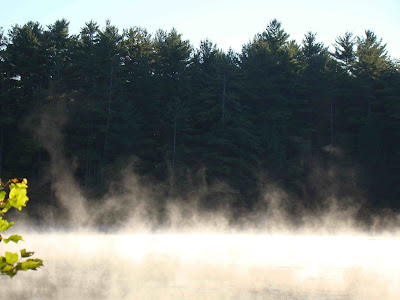 I met the doe and her three fawns this morning.  When they saw me, mother and two fawns bounded off in one direction, but the third was separated, and went off in another direction, swimming across a narrow stretch of water, and then bounding across a swamp and onto Sheep Island.  They were too fast for pictures!

The painted turtles were out everywhere right at mid-day, sunning themselves on logs anywhere they were in the sun.

I found one with its rear legs stretched out into the air.  I'm told they do that to kill bacteria.  I find lots of leaches on the  legs of turtles, and I wonder if by drying them in the hot sun they also get the to leaches to let go. 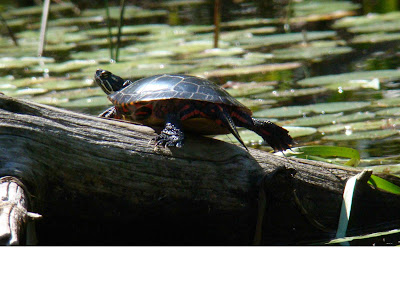 I also saw a flock of four ducks (American Black Ducks, I think) enjoying the sun.  As I kayaked by, a couple of them flew off and landed farther into the marsh. 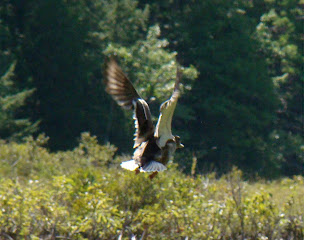 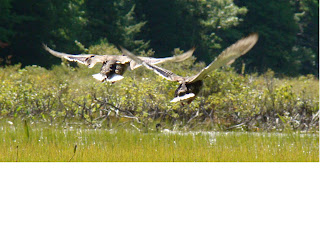 but this evening, even the sky had a fall look to it. 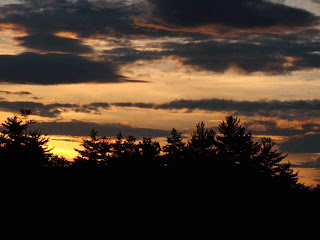 Posted by Scott Powell at 9:32 PM No comments: