The best season for hiking has arrived - cool temperatures, clear blue skies, and no bugs!  It's the perfect stage to explore all the bounty autumn has to offer, whether it's in your back yard, on a lake, or in the mountains.
Linda and I took a walk at Whitten Woods, a new conservation area opened by the New England Forestry Foundation and the Squam Lakes Association.  Located in Ashland at the site of a historic farm owned by Rubin Whitten who saved the residents of Ashland by sharing his wheat crop from this hill, the only crop that survived the "Year Without a Summer".

In 1816 Mount Tambora in Indonesia erupted, affecting weather across the world.  In New Hampshire there was frost, snow, and ice throughout the summer, with killing frosts every month.  Most of the crops failed, leaving the settlers without a winter food source.  But up on this high, south facing hill, Whitten had planted wheat - an unusual crop in these parts, but more tolerant of cold weather.  His was one of the only crops which survived; the elevation may have helped, as cold airs sinks down into the valleys.  He offered his crop to the townspeople, becoming a local legend and hero.  [Ref:  Eric Werme, Old Farmer's Almanac, WMUR]

It's a pleasant hike on good trails with two nice view points.
Starting up from the trail head on Highland Street just outside of downtown Ashland we enjoyed some early color in the leaves and plenty of fall flowers.
There is a lot of blue in flowers right now, including this dark-blue bud I didn't recognize and can't identify - any ideas?   (Update:  Paula Wanzer identified this for me - it is a Closed Gentian, an interesting flower. I'll try to provide more information on it next week.)

As we walked along the old roads of Whitten's farm, signs of human activity were evident, including fruit trees such as this crab apple. 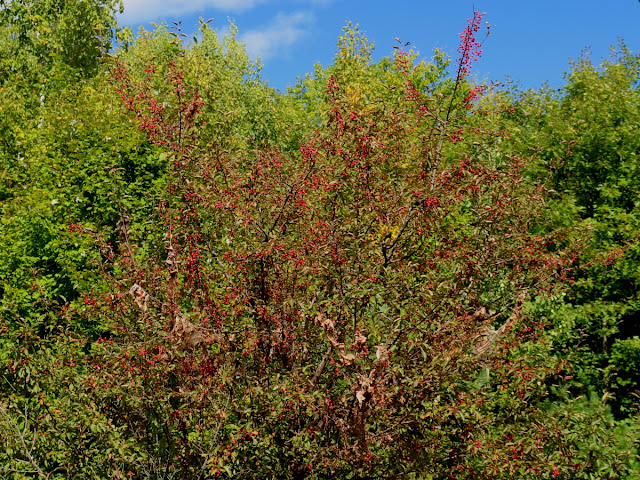 Humans may not be harvesting produce here anymore, but the animals continue to take advantage of what the settlers left behind.  Seeing motion in the branches led us to a red squirrel fattening up for winter on the small fruit. 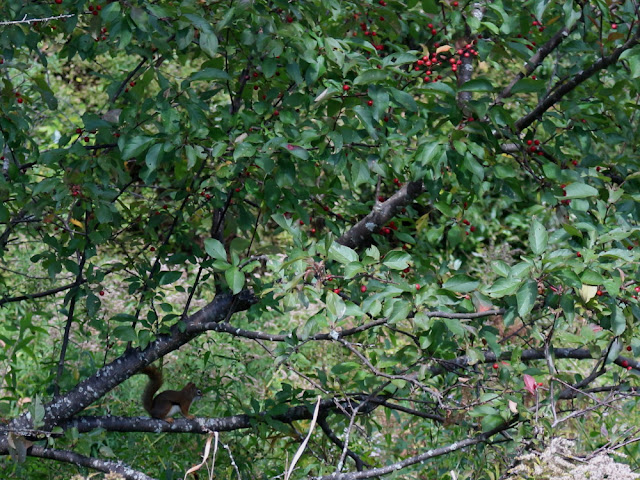 Most of the property has long since been taken over by forest, which has clearly been logged in the recent past based on the size of the trees.  But as we walked we came across some large areas that have been kept open over the years, though we couldn't determine why.
Why was this stretch of gentle terrain kept open all these years?  It looked like a ski slope.

Whitten Woods is a great, nearby place to visit, and a good skiing and snowshoeing option in the winter.


Earlier in the week on a hike at higher terrain, a small visitor came to say hello to me. 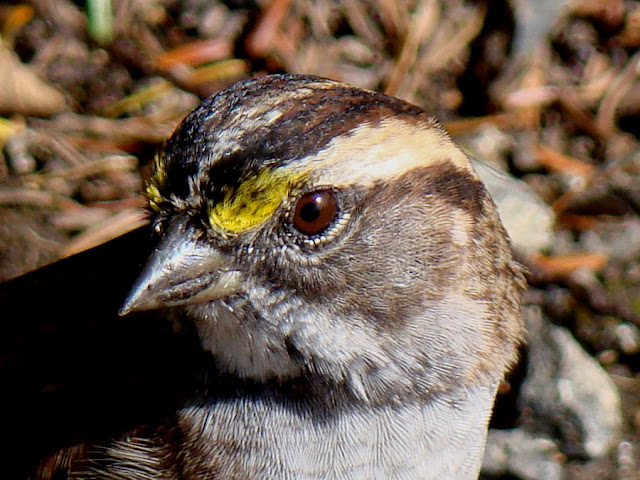 This pretty bird hopped out of the scrub, right up to my feet as soon as I sat myself down on the summit of 4327' high Mt. Flume at the southern end of the Franconia Range.  It was clearly looking for a handout (which it didn't get).
It's a pretty harsh environment to survive;  they must put up with it in order to live in such a beautiful place.

Back down at lake level, the water has been cooling off, but it's still plenty warm to form morning mist on the lakes. 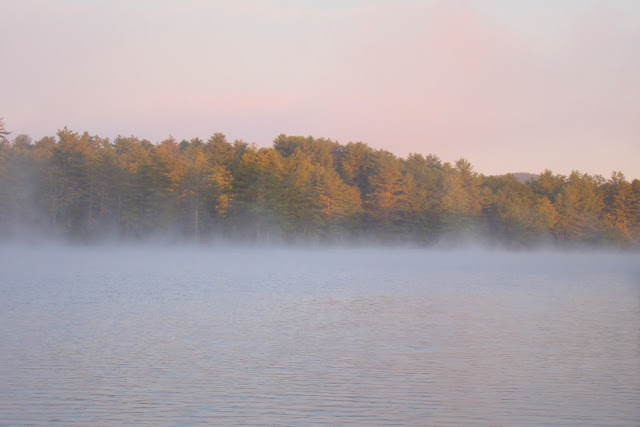 On Saturday the fisherman were out for perhaps the last bass tournament of the year.  As they roared down the lake in the morning a loon hid in the mist, watching them go by. 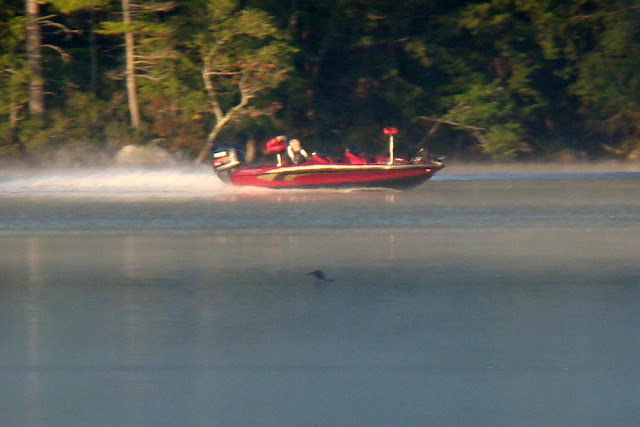 Our mating pair is still on the lake, though their brilliant contrasting black and white plumage is starting to fade into the drab gray clothing they will wear through the winter. 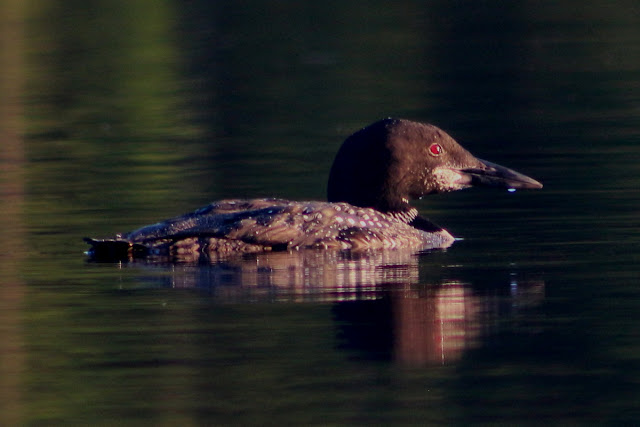 It may be the best season for hiking, but that doesn't mean there aren't plenty of days left on the water to watch for loons, sunsets, and coming shortly, brilliant fall leaves.  Whether at elevation or sea level, there's autumn beauty everywhere you look in New Hampshire. 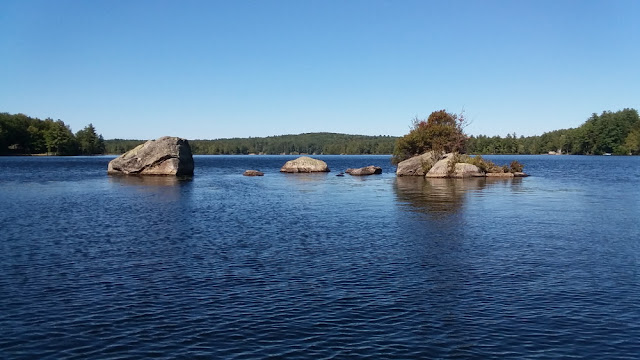 Posted by Scott Powell at 12:55 PM No comments:

We are just past the equal of day and night:  astronomical fall began last night at 9:54 pm when the autumnal equinox occured.  As the days get shorter and cooler both plants and animals sense it - everything is starting to prepare for the coming change.  Here is just a sampling of the many indicators around Lake Wicwas that the local community is adapting to what must come.

The trees on the shoreline are just starting to show some color. 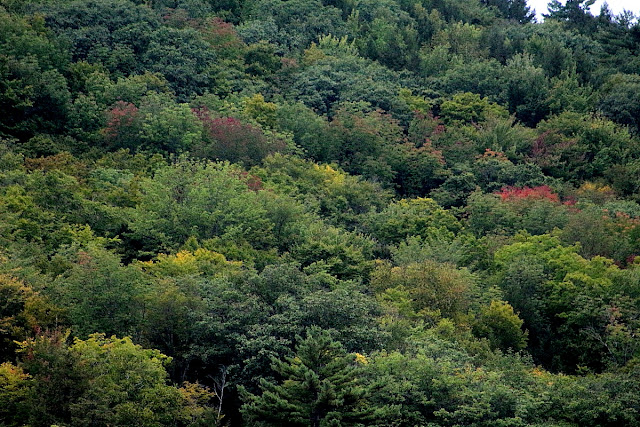 Turtles and frogs are out collecting every last bit of warmth they can get before they go into hibernation. 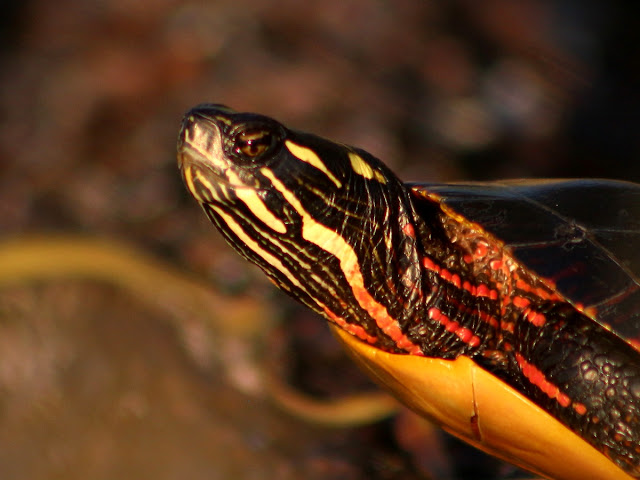 Bees are scurrying around, gathering up as much pollen as they can find to get them through the winter.

A northern water snake was swimming across the lake - perhaps it was hoping to catch a passing squirrel?

I bet the snake is a faster, more agile swimmer than a squirrel.


The geese are starting to flock up for their travels south; I counted 39 on the lake one afternoon.  This big one, probably a male, was on lookout duty.

After having little visible presence during the summer the beavers become much more active this time of year.  Here they have stuffed the dam at the outlet of Lake Wicwas with all kinds of debris as they attempt to raise the water level to increase the size of their domain.

The comeback of beavers to New Hampshire after their virtual extirpation has created the water bodies that are a big factor in the recovery of the Great Blue Heron population as well.  I caught one such heron gliding over the lake on its way to a rocky perch for some fishing. 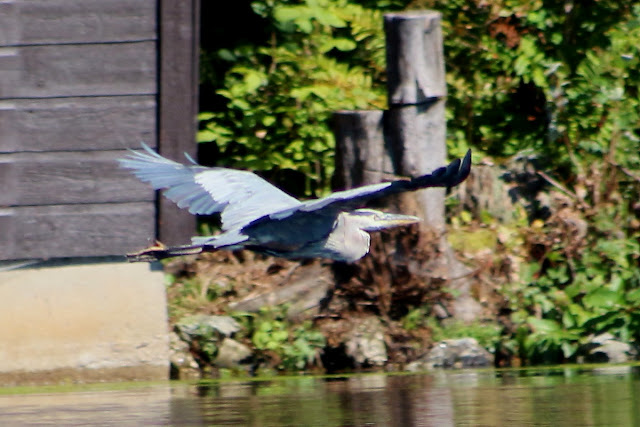 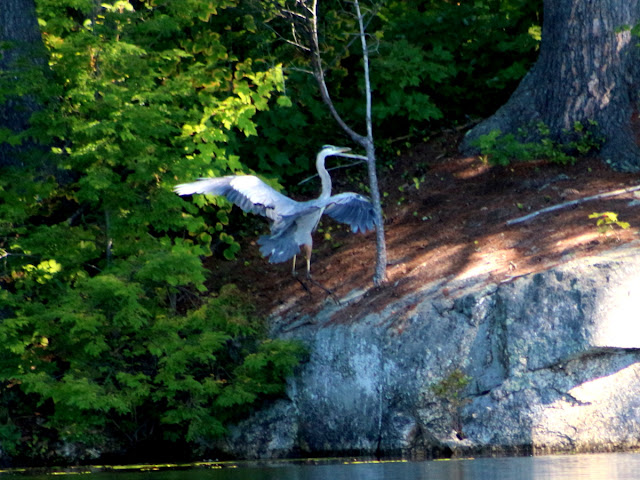 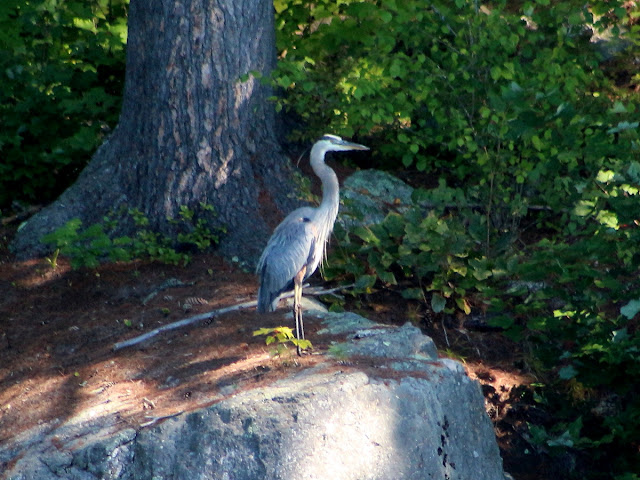 I didn't see much of Mr. Wood Duck this summer, but he did make an appearance on one of my kayak trips around the lake this week.  He and the misses will stay together on the lake for some time yet and migrating wood ducks on their way south will stop by to visit them. 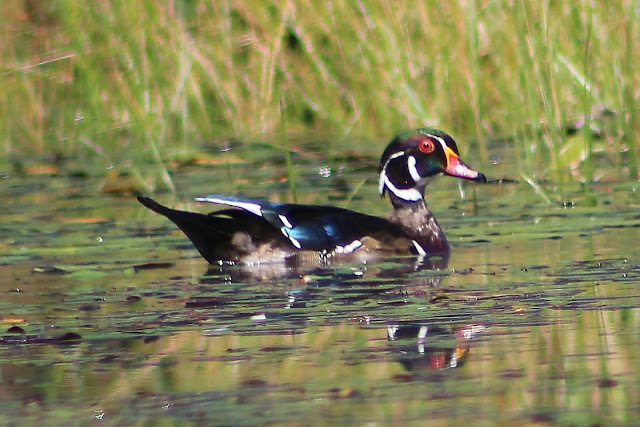 Many birds - herons, loons, ducks - will be around quite a bit longer, some right up until the lake finally freezes over.

Many human residents of the lakes are also getting ready to find a warmer place to spend the winter.  Here are some bittersweet late-summer scenes, as we get ready for the changes as well.

The final sunset cruise of the Hurricane. 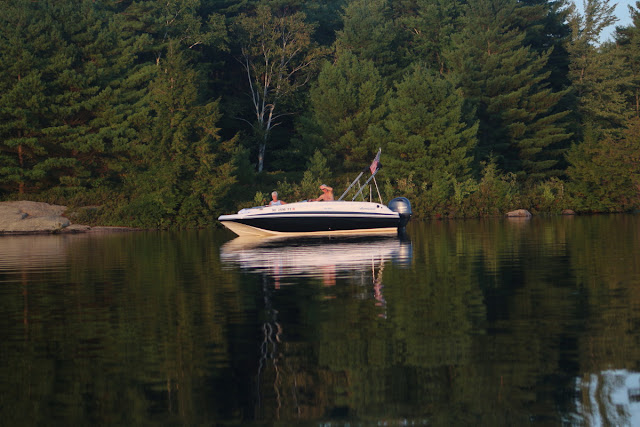 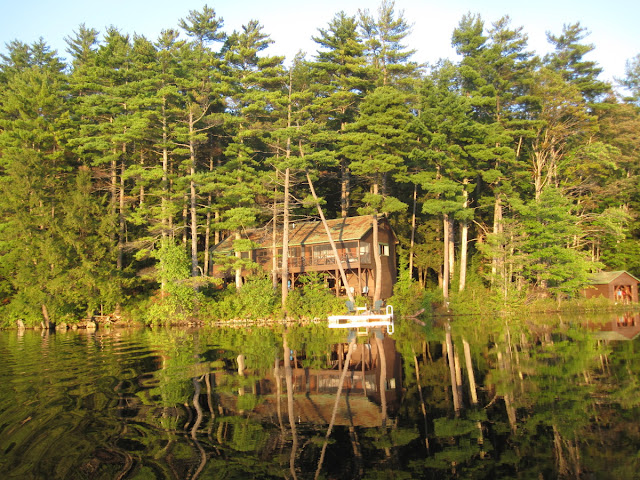 A warm, calm day for a kayak - hopefully there will be few more of these! 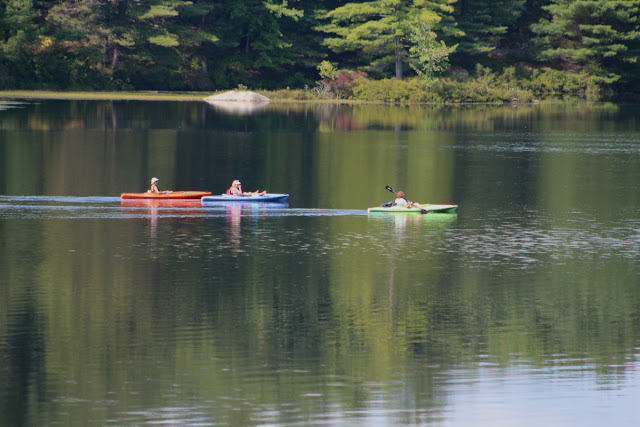 One last canoe before closing up the cabin. 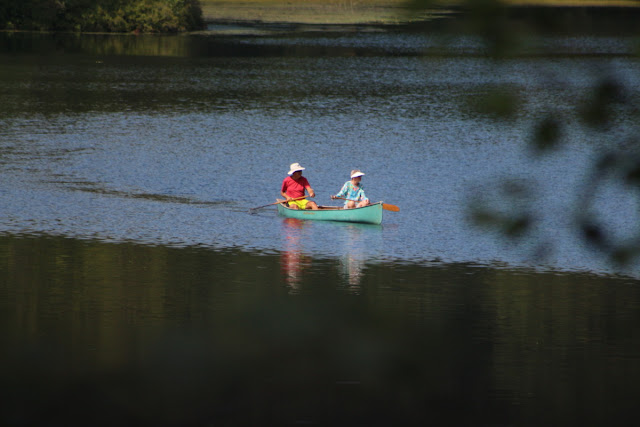 And finally, a lonely bench overlooking the lake waits for someone to come sit and enjoy the sights of the season.  I hope you'll be able to take in some of the most beautiful sights of the year as we make the transition into autumn. 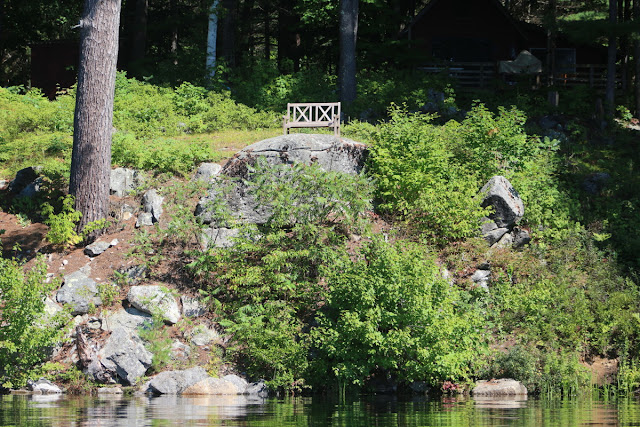 Posted by Scott Powell at 12:42 PM No comments:

We took a road trip to Newport this week, which of course included visits to a couple of wildlife refuges on the Rhode Island coast.  The highlight was the Sachuest Wildlife Refuge at the tip of Middletown, Rhode Island.  There are beautiful coastal views of 360 degrees around the park with lots of bird watching opportunities.

Another nice refuge is the Emilie Ruecker Wildlife Refuge over on the Little Compton side of the bay.  There we saw egrets perched in trees and lots of fiddler crabs on the banks. 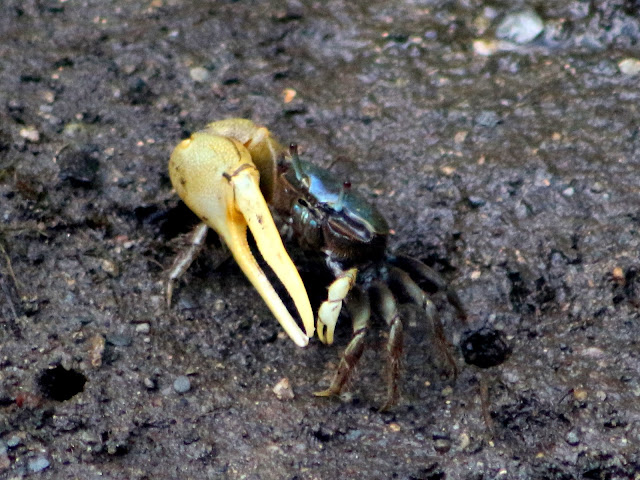 While we were there the surf all the way from Hurricane Florence kept building, and by the last day it was pretty impressive. 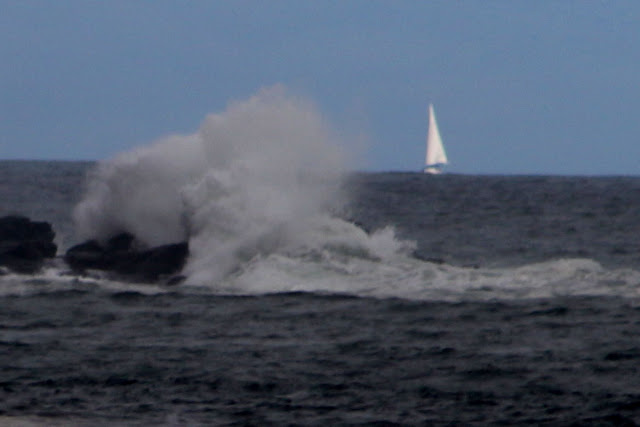 The surfers certainly were enjoying the high surf, especially with calm winds as the storm was so far away, and with warm water temperatures at this point in the season.

Now back to New Hampshire and our little raccoon.  I say little because I think it was a young one based on its size and its behavior.  It didn't seem fazed by my presence, of which it was clearly aware. 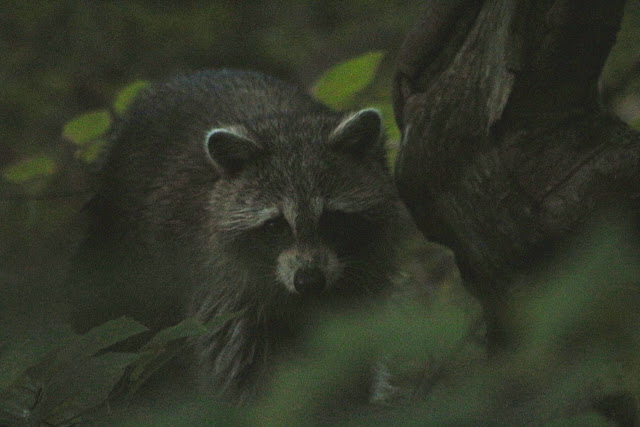 It also made quiet calling sounds as it poked around on shore.  It decided it was concerned enough about me to head down into the lake to swim along in a little more protected position from land predators.

But it let me follow it along for a good 15 minutes, all the way along the shoreline, occasionally coming up on shore and then hopping back down into the water. 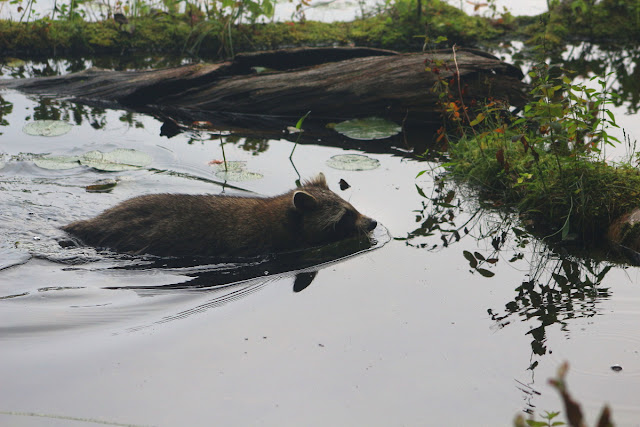 It was as comfortable on the water as it was on land, paddling along, climbing up and down the bank as it pleased, on occasion rummaging around under a hemlock looking for something to eat. 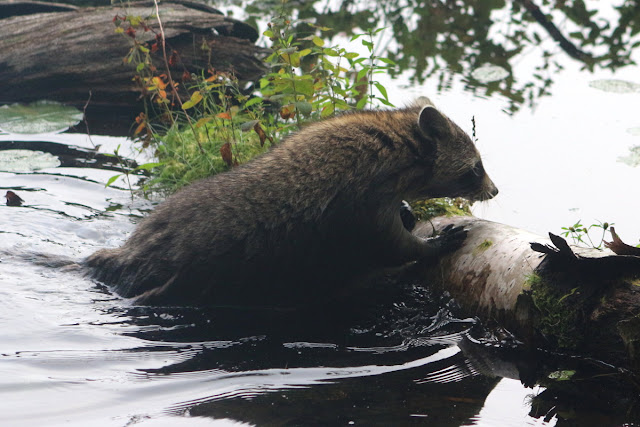 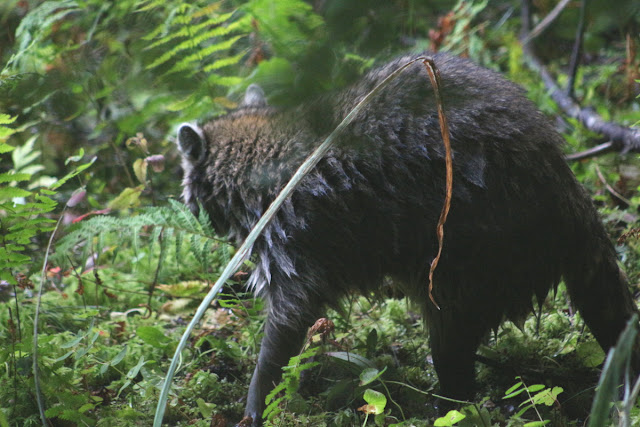 As I watched I thought how easy it would seem to be for a coyote to catch it.  Here I was, large and clumsy, crashing through the woods, yet I was able to walk ahead of it and then watch it come up towards me and swim or waddle by.  How hard would it be for a much smaller, camouflaged, deft coyote to hide by the shore and grab it on the way by? 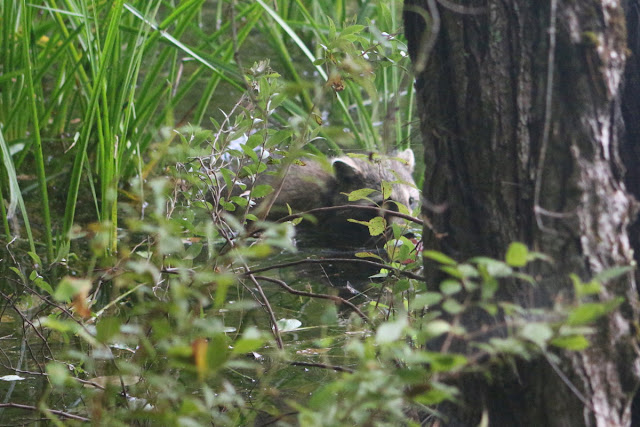 Eventually I went on my way, allowing it continue its morning safari around the lake shore. 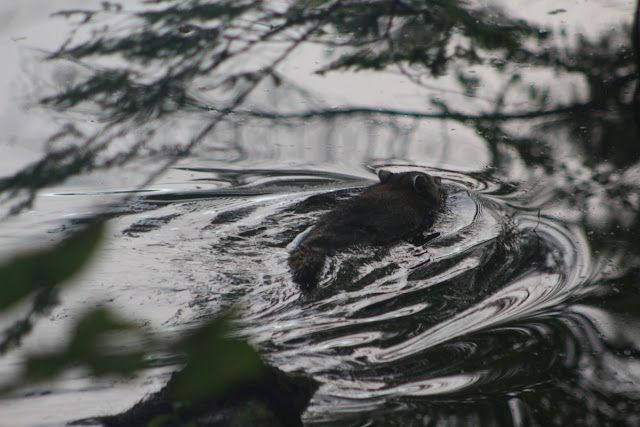 If you were in the area this weekend, I hope you enjoyed the beautiful, calm, days - the water is still nice and warm.  But the lake is also quite high, even before we get the dump of rain from the remnants of Florence.  At least we won't get seven foot waves on Wicwas! 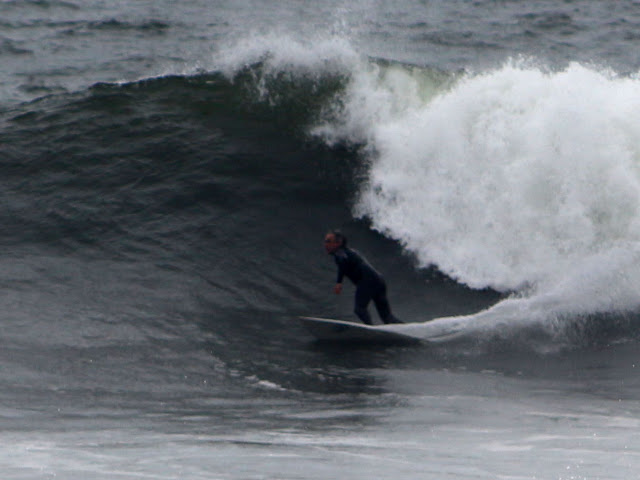 Posted by Scott Powell at 8:21 AM No comments:

You may have seen a picture shared by the Society for the Protection of New Hampshire Forests (SPNHF) of a gray squirrel swimming across the Merrimack River.

I didn't know squirrels would swim on their accord, but since then people have been posting all kinds of pictures of swimming squirrels, including one swimming around boats in Bow Lake.

Someone even caught one of the little rodents swimming  between two islands right here on Lake Wicwas!  (Thanks for sharing!)


So now, in addition to running, jumping, chewing, and even flying, we can add swimming to the resume of multi-talented gray squirrel.

Personally, I'm happy swimming in warm water, so as far as I'm concerned this great summer weather can continue as long it wants to - even if it doesn't produce the clear blue skies we appreciate in the fall hiking season.  A quick trip up Mount Major this week certainly didn't provide the clear skies that will be heading our way in the near future.

But it did show early signs of foliage turning.  In addition to blueberry bushes turning red there were quite a few trees on the hills with tinges of yellow in them.


Morning walks with fresh dew everywhere will often reveal pretty spider webs that would be unnoticed later in the day.

And once your eye is drawn to uncommon places, other interesting scenes are revealed. 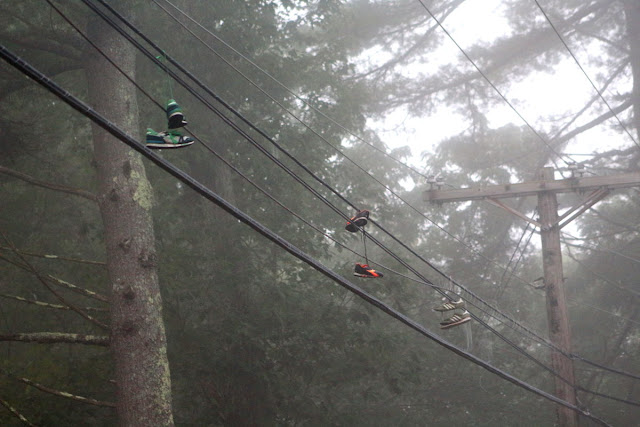 Spiders aren't the only animals that decorate power lines.


On another morning I heard the tell-tale pounding of a pileated woodpecker working on a tree and was able to track it down.  Here's a link to a video I took of it working on an oak tree near the lake;  no tripod, so I apologize for the shaky video.

Finally, I saw yet another new creature on the lake this week, an extremely rare find that dates back to the Cretaceous period.

One never knows what will appear on a New Hampshire lake.
Posted by Scott Powell at 1:49 PM No comments: