With the summer solstice occurring this week, Lake Wicwas is now into the heat of summer, when the animal activity moves into the cooler times after dark.  One of the best parts of this time of year is getting to sleep with the windows open, letting the nighttime sounds of nature into the house.  Whether it's a coyote or an owl or a tree frog, it's fun to hear what's going on out there all night long.  And what's more satisfying than being awakened in the middle of the night by the call of a loon or the ga-lumping of a bull frog?

Most of the birds are quiet during the heat of the day, singing only in the early morning or evening;  one exception being the Red Eyed Vireo which will sing all day long throughout the hottest weather.
On a morning walk I heard a Downy Woodpecker chirping, but as I came nearer it turned its occasional chirping into a non-stop string of scoldings.

It kept a close eye on me and never once stopped for even a second - for several minutes. 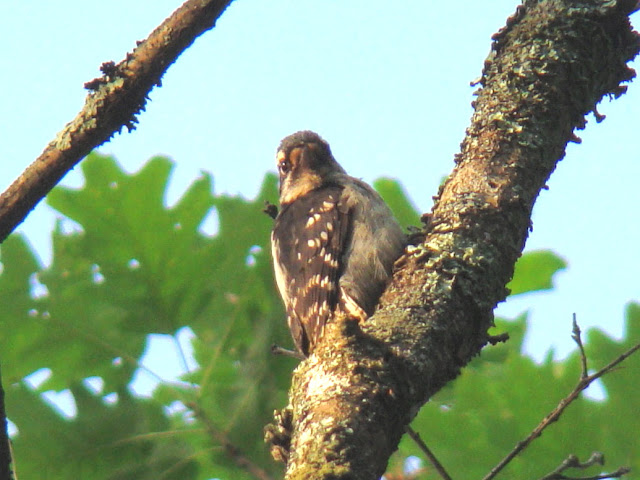 Eventually I went on my way, leaving its racket behind me. 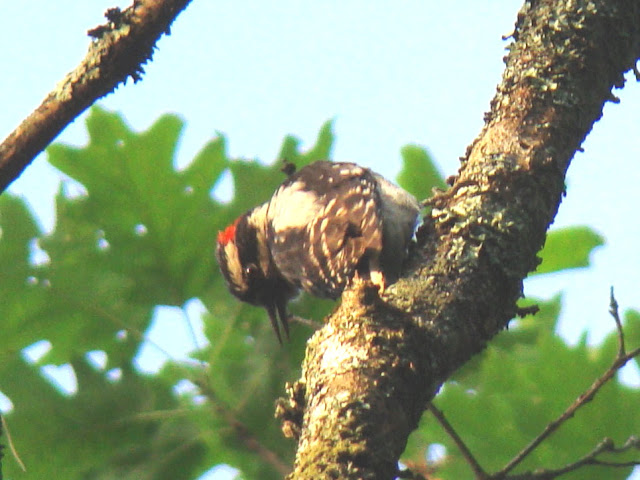 The beaver are also mostly nocturnal, not visible much this time of year, but signs of their presence and activity are found during the day.  These hemlock trees have had their bark removed all the way around which will eventually kill the tree.

Beaver rarely cut down hemlock, but they remove the bark so it will die, leaving space and light for tree species more to their liking.  It does appear they consume the bark however, as there are no bark remnants around the base of the trees. 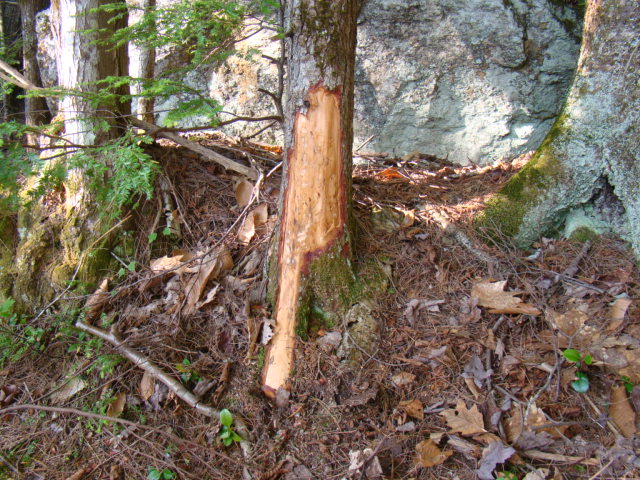 The spring flowers are mostly gone now, having relinquished their reign to summer plants that can handle the heat, such as Daisies and Hawkweek.  The Partridgeberry, which looks quite similar to Arbutus, is blooming, and the Strawberries are fruiting. 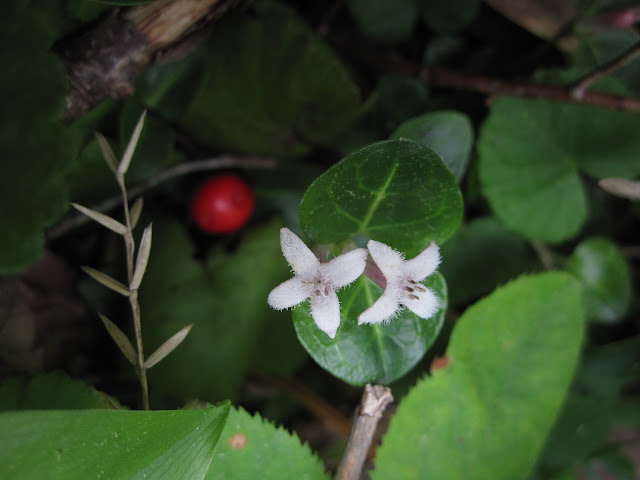 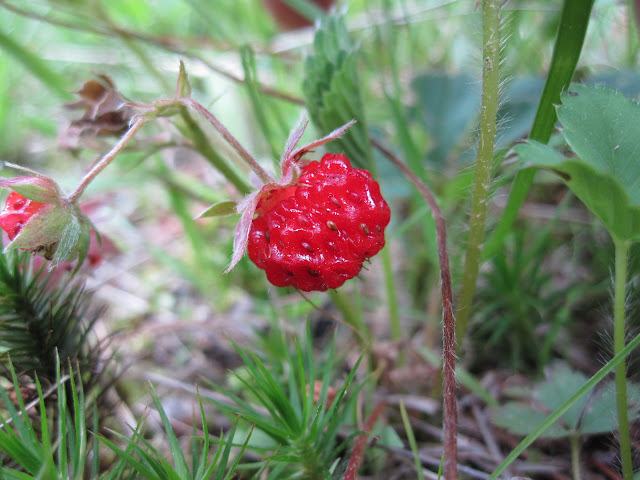 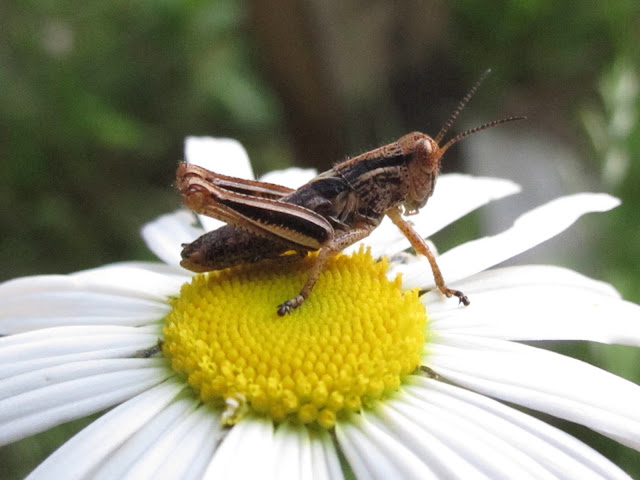 Last week there were hundreds of tiny grasshoppers springing from the ground as you walked by - they have grown quite a bit in one week.

I did observe one intruiging animal activity this week - a Orb-weaver Spider.  Our dock, like probably every dock on Lake Wicwas, has a nice spider web or two on it.  Swimming one afternoon, I saw a medium-size dragon fly get caught in the web.  Instantly the spider came out from hiding to see what it had caught, and scurried quickly up to its prize.

It went straight to the dragonfly and sunk its jaws into its abdomen to inject a dose of venom. 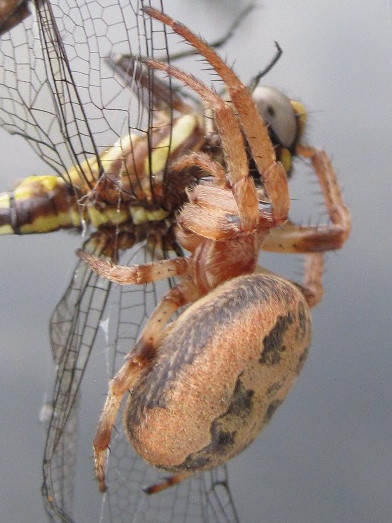 Within just a minute or two the dragonfly was dead, or at least paralyzed.  The spider then wasted no time in feasting on its catch, as it started to suck the life juices out of it.  (Which made me realize that a spider must be immune to its own poison.) 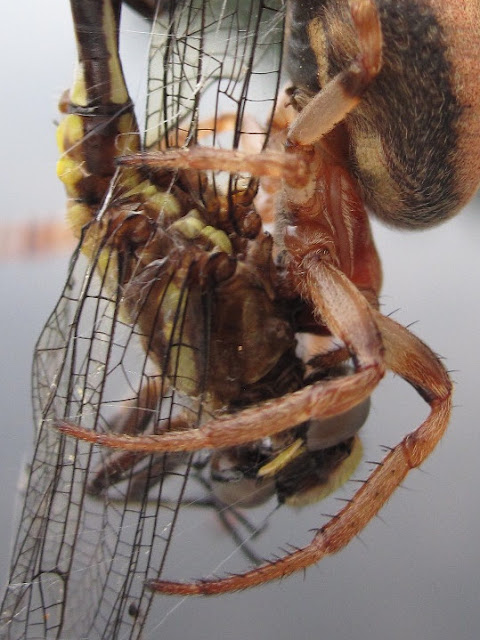 Within a few minutes the dragonfly was noticeably collapsed and reduced in size. 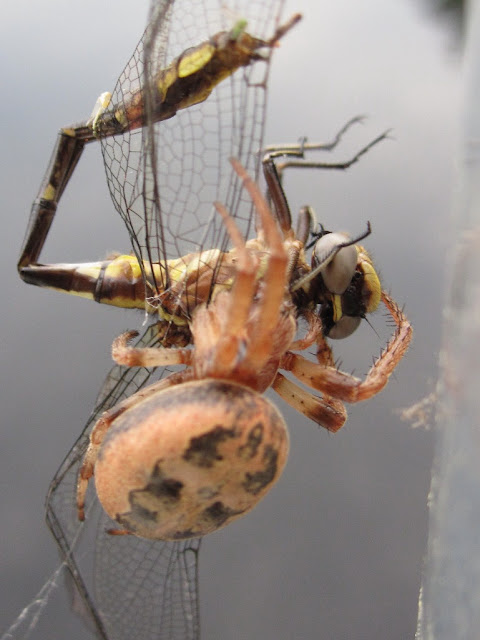 After its meal, the spider went out and made some quick repairs to its web, and I could see it spreading a new thread radially along its trap. 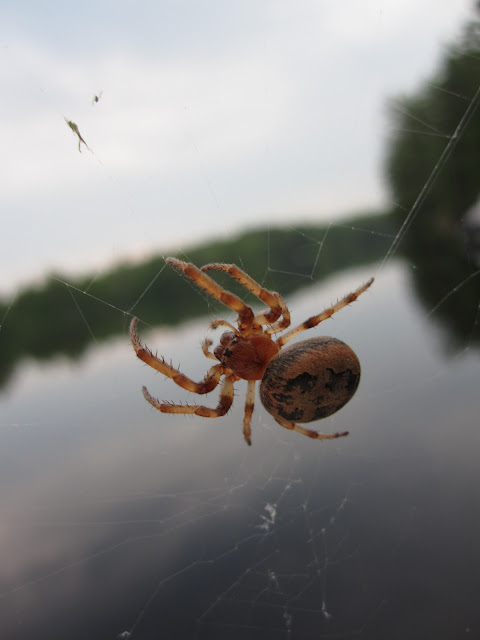 It was a small scale version of prey and predator that takes place constantly in nature at every scale.

The heat and rising humidity of the week culminated in some rather strong thunderstorms today, but Wicwas avoiding the worst of the storms that other parts of New Hampshire experienced.  As the storm passed, the sky to the west cleared, leaving eerie colors to a pretty sunset, and announcing the start of summer. 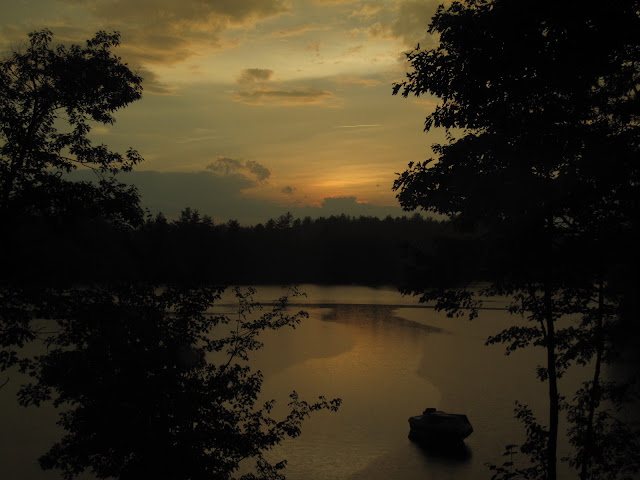 Posted by Scott Powell at 9:13 AM No comments:

Success!  This week I was able to catch the fawn that Linda saw last week (at least we assume it's the same one) and its mother.  They came by in mid-morning, and the fawn has grown dramatically in just one week.

We also had several more visits by the gray and red fox, though all these visits were in the night.  I got one picture of the red fox that shows that its winter coat is just about gone, exposing its black feet.

At the other end of the animal spectrum are the dragon flies which hatched out a few weeks ago and are highly abundant at this point.  Coming across a sunny spot there will be dozens of them that alight and buzz around you as you pass by.  One of the more prevalent species is this model with white on the center of its abdomen and clear wings.

The best I can determine is that it looks like a Scarce Chaser (Libellula fulva).  But I can only find evidence of this dragon fly living in Europe, so I doubt that's correct - I'll have to keep searching.

An interesting bug I did identify is one of those animals that has a very descriptive name:  It's a Six Spotted Green Tiger Beetle:

These are beautiful metallic green and really sparkle in the sun.  They like sunny locations and consume various insects including caterpillars.  I hope they like Gypsy Moth caterpillars, as there are quite a few of them around this year.  Perhaps you've seen them:

They are quite pretty even if they are destructive.

We took my father (and mother!) up to Sugar Hill today to see the mountains and the Lupine - it was a pretty day, and we made it back to Lake Wicwas for a BBQ well before the rain started.

Happy Father's Day to all the dads out there!
Posted by Scott Powell at 9:27 PM No comments:

Get yourself comfortable - with no post last week due to concerts, there's a lot of nature to report on this week!

First, Linda saw a very young fawn!  It was with its mother, and as soon as they saw each other (Linda and the doe that is), the doe hustled her fawn quickly up into the woods to safety.  I believe I saw the same doe the next day in a field, but I didn't go investigating.  It was probably right next to the fawn which was hidden down in the grass, and I didn't want to disturb it.  But the adult was far too patient letting me pass by - without a fawn nearby it would have long since bolted off.  Sorry, no pictures here.

But I did put out the trail camera to see if I could catch a picture.  I was not lucky enough to capture them, but, in the process, I did record two other critters I had never seen in that location before:  a skunk and a coyote:


The coyote looks as though it may still be losing its winter coat, based on the thick gray fur on its rump.

Skunks have a widely varied diet, but one of their specialties is digging up turtle eggs that have been laid in the ground.  I saw this giant snapping turtle on the road just last week

so maybe the skunk had a good feast on those eggs - I wouldn't complain about that!  I'm glad I didn't come across the skunk on my evening walk!

But now here's another well-defended animal that I did come across this week:

A porcupine!  I've seen them in trees, and in winter on the snow, but I've never seen one just walking along a trail.  It was waddling along in front of me, and when it detected my presence it stopped, turned sideways and looked at me as if to say "what are you doing here?" 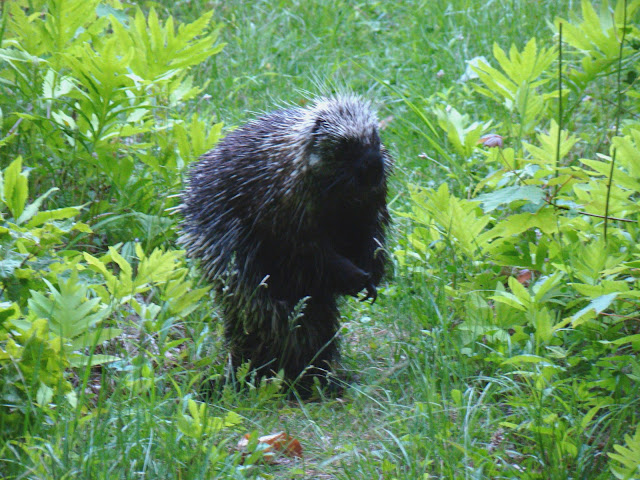 Needless to say, I didn't get any closer.  Porcupines seem to have this attitude of what-me-worry?, knowing that every animal in the forest - save the Fisher Cat - knows to keep its distance.  We know that domestic dogs have forgotten that lesson from their forebears and will come home with a face of quills, but other than that and the fisher, the porcupine just goes about its business.  It continued down the trail, stopping a few more times to check me out, and, eventually deciding it had enough, scurried the best it could off into thicker cover.  I was a little taken aback at just how large it was - it was my first encounter that close with a porcupine.

OK, I warned you, there is a lot of activity in the spring and early summer:  next up was an encounter with a beaver.  Walking along a trail some 50 yards from Lake Wicwas, I heard the report of a beaver alarm, warning of my presence with its tail.  Beaver aren't too dangerous, so I headed towards the lake to see if I could find it.  As I approached the shore, I saw it swimming down the shoreline, and watched it turn back, swim past, and repeat several more loops. 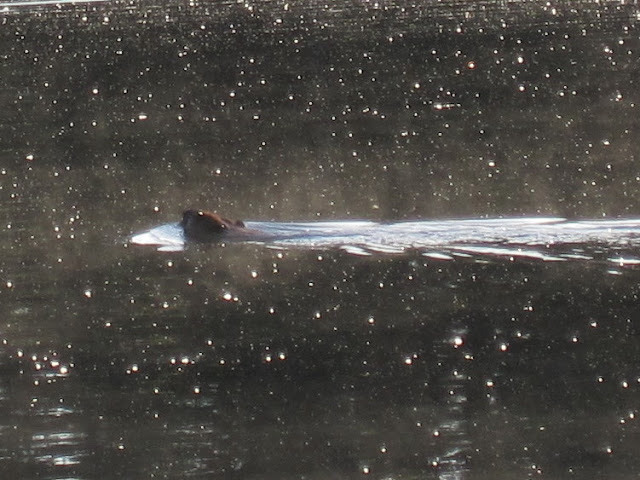 Every few minutes it would slap its tail, making a loud ker-whack sound accompanied by a good size splash.

I wondered if it wanted to come up on shore to take a short-cut across the peninsula, and I was thwarting it.  Eventually it went off and swam all the way around.... 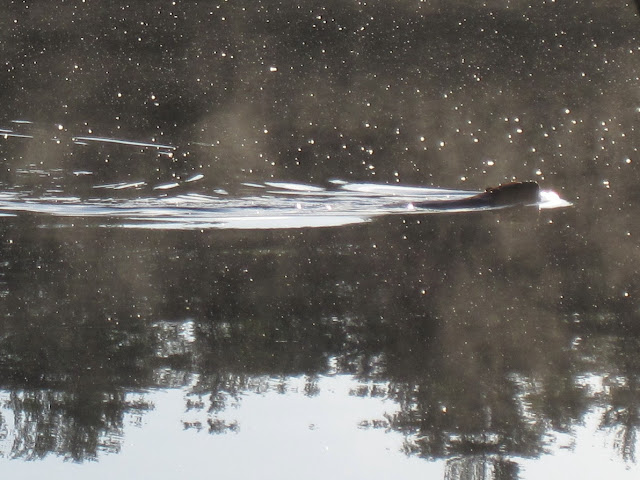 The birds are active also.  I saw a Pileated Woodpecker fly by, stopping at every oak tree to climb up its trunk looking for insects.  We also saw two hawks, Broad Winged Hawks I believe.  First I saw a very large one, followed close behind by a much smaller bird.  At first I thought it was a crow harassing it, but as it came closer it was clear it was another hawk.  It had a wide, curved, and banded tail.  The two of them circled together for a minute before slowly drifting off to the south.  It looked like flying lessons being taught to junior by the professional!

The loons have perhaps not yet laid their eggs, but they are certainly searching out a good nesting site.  We saw them trying out a site at one location, while another loon watcher saw them the same day trying a different site.  Unless there are two pairs?  Very unlikely, and hasn't happened at Wicwas before, but you never know.  Time will tell.  If you see a loon close to shore, or acting strangely, keep away to not endanger its eggs.  It only takes a minute off the next for a predator to gobble up an egg.

OK, we're nearing the end.  Just one insect observation - the butterflys are back and plentful with the flowers out now.  I saw several White Admirals and a few Tiger Swallowtails.

The Tiger Swallowtail hibernates in its chrysalis in the cold New Hampshire winter, and in spring feeds on flower nectar before laying its eggs. 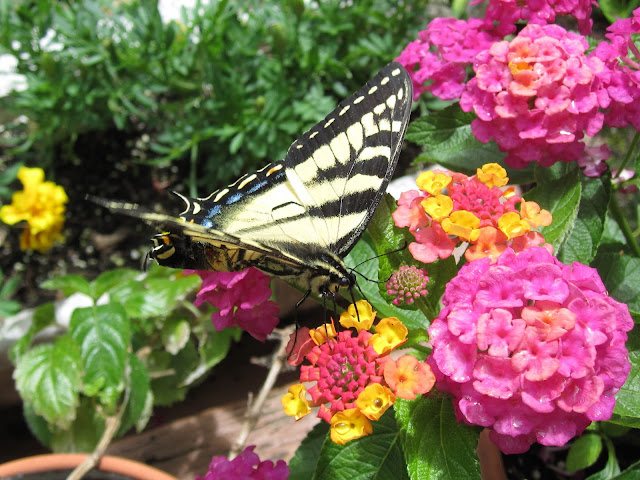 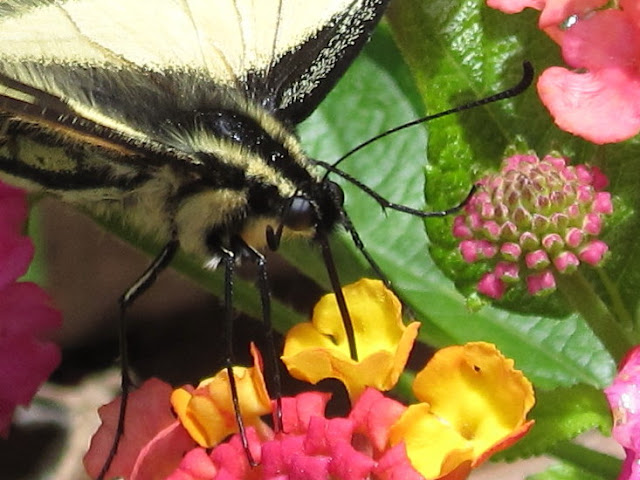 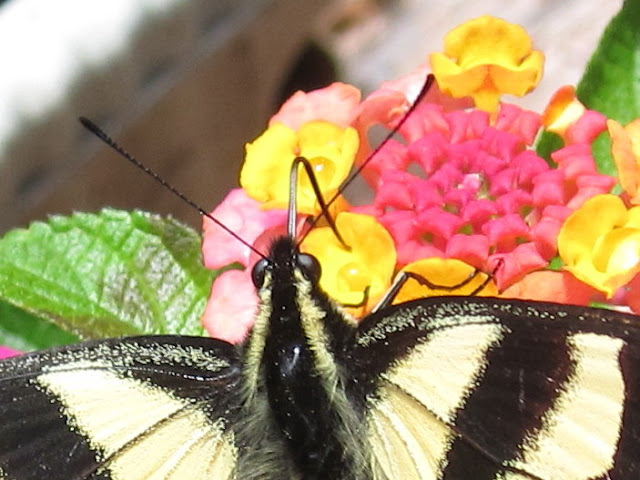 This particular butterfly either has a defective right wing, or perhaps it hadn't fully pumped its wing to full size after emerging.  Either way, it didn't seem to affect its flight at all. 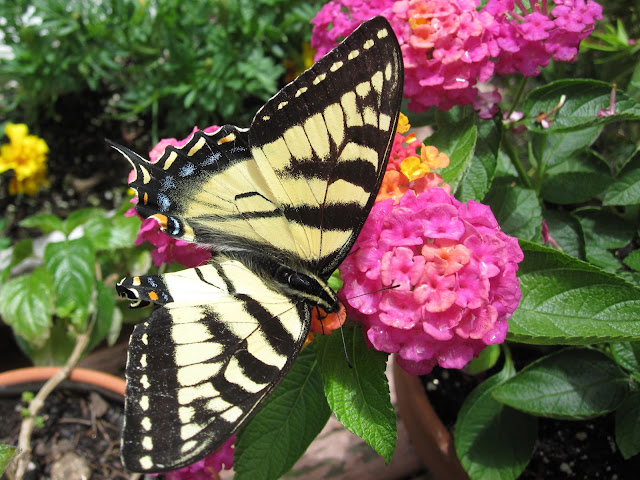 So that's what's been happening around Lake Wicwas the past week or so.  This coming week, most of the activity will be of the two-wheeled variety.  But remember, you never know who you'll meet around Lake Wicwas! 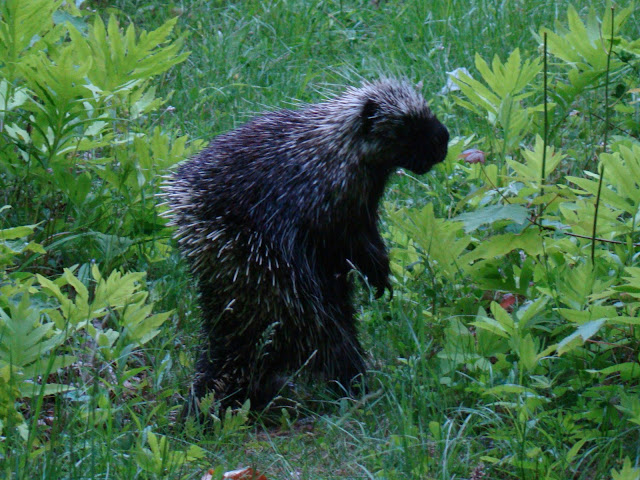 Posted by Scott Powell at 9:45 PM No comments: