The two loon pairs on the lake seem to be getting along, and the altercations between them as well as the lone loon on the lake are becoming less frequent, at least based on the amount of audible arguments that I'm hearing.  Sam is growing quickly now, and has been seen frequently around the lake being well fed by a parent. 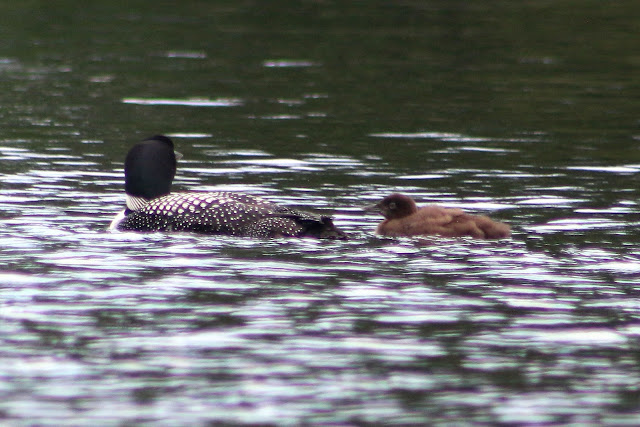 But we have noticed that most of the time only one parent is taking care of Sam;  the other is far away.  Maybe that's the reason for fewer altercations - I wonder if one parent is always on guard duty, enforcing a wide buffer from Sam.  But this leaves Sam vulnerable to an aerial attack by an eagle whenever the parent watching Sam dives to fish. 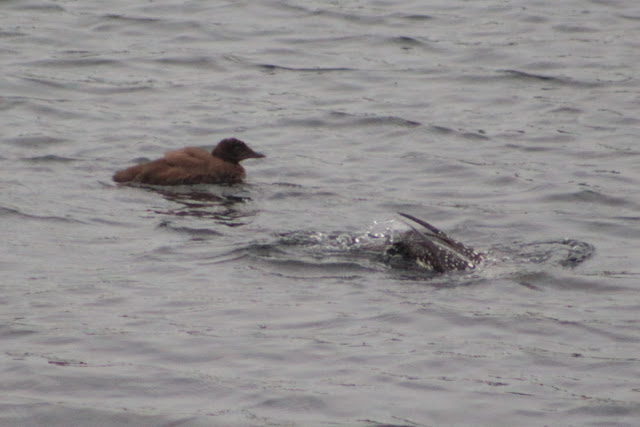 Perhaps Sam is now wise enough to keep an eye on the sky and can dive sufficiently to escape an attack.  I said last week that a hawk may have gotten our other loon chick, Justintime.  But later accounts, including a photo taken by Debby Crowley of an eagle harassing the loons, tell me it was most likely an eagle rather than a hawk.
Hawks are mostly land hunters, and an immature eagle can be easily mistaken for a large hawk.

Back on land, I've been watching the black cherries all summer;  it's a reliable long-term calendar for the progression of the season.  It begins in late April or early May with shaggy pre-buds forming.
A couple of weeks later, tiny round green buds appear.
By late May the buds start to turn into white blossoms.
This year it looked it was going to be a good crop.
In late June green fruit has formed which then grows and ripens through most of July, starting to turn color from green to red to black as July progresses.
But few will actually make it to the black stage, as the birds and bears consume them rapidly as soon as they start to turn red.  The fruit is edible, but they have a low flesh-to-pit ratio, as the pits are large - they are quite distinguishable when you find them in bear scat, revealing that the bears have been to the cherry grove (sorry, no picture - I'll keep my eye out over the next few weeks).


On a different note (no pun intended) perhaps you attended the Meredith Sculpture Walk this past Friday which combined art and music throughout Meredith Village. 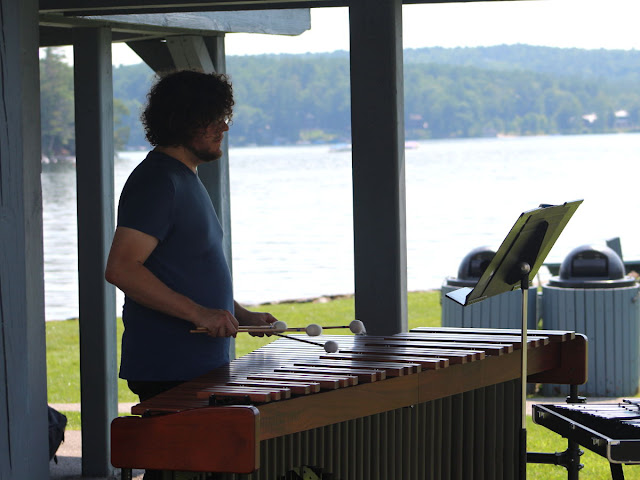 It was a beautiful day to appreciate the arts with many New Hampshire musicians and artists featured.  If you missed it, you can tour the 34 sculptures anytime;  there are self-guided tour maps available in the village and online. 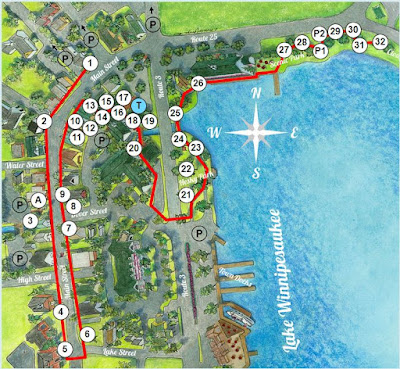 Art, Music, Nature, Lakes and Mountains - the Lakes Region has it all! 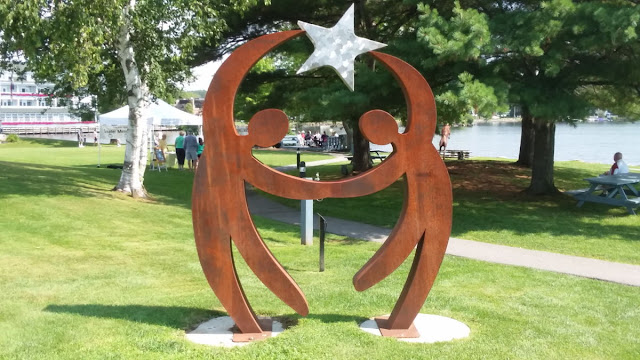 Posted by Scott Powell at 11:00 AM No comments:

Loons may get all the attention this time of year, but there's plenty of other action taking place around the lakes.  One recent morning I heard the sound of an attack on an old rotting snag, and I was able to track down the source. 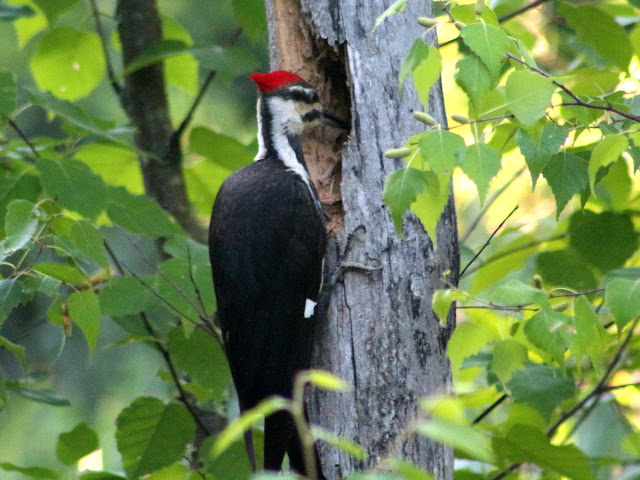 Pileated woodpeckers are one of the more impressive New England birds and their populations have been growing since agriculture was widely abandoned in the late 1800s.  As the forests have regrown and become mature, more trees are dying, providing food sources for many animals.  It's important to wildlife to let dead snags stand if they're not a danger to homes or people.

With lots of summer flowers in bloom, close inspection will often reveal insects attracted to their pollen and nectar.  And sometimes, an even more careful look will reveal creatures which come to feed on the insects feeding on the flowers.  Linda found this pretty spider in her garden and brought it in to show me.  (Isn't she amazing?)
The goldenrod spider - so named because it's often found on goldenrod where its color lets in blend in - is one of my favorites;  it should be one of yours too as it is harmless to people even if it does look a little bit evil. 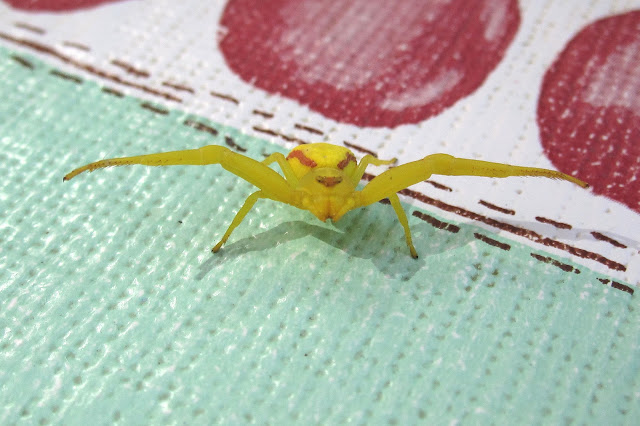 But it is an enemy to wasps which are its favorite food.  It also doesn't make webs except to hold its eggs - it attacks its prey directly by simply hiding in plain sight.  And it has a pretty amazing property in that it can change its color from yellow to white depending on the flower on which it's hunting, waiting for its prey to arrive.  Here's one I saw a few years ago on a magenta-colored flower, where it had turned itself white with pink stripes. 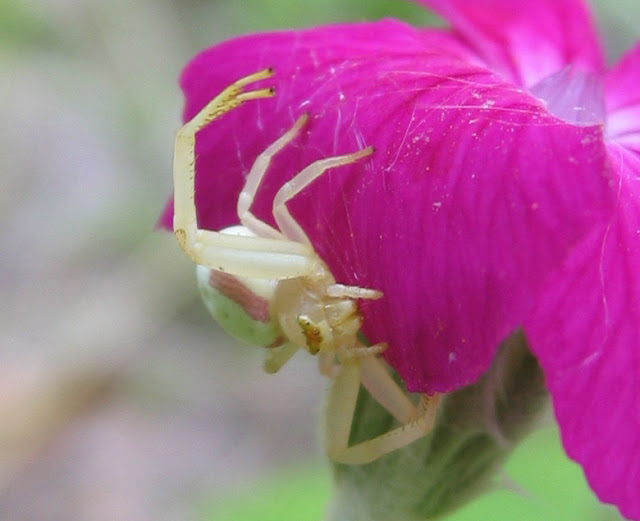 The color change happens slowly - it can take a month [Ref:  Kidzone] - but it is effective.  Here is a picture from that web site:
Look carefully at your flowers and maybe you'll find one.  While you're searching, you're bound to see other insects taking advantage of pollen and nectar, as well as the carnivorous insects preying on them.


Now the update on the loons, and there is sad news to report.  The younger of the two loons chicks has been lost, apparently to a hawk.  On Thursday morning we witnessed a hawk attack on Sam, followed by awful loon calls.  But after a few moments of fear from not seeing the little chick, out popped Sam from behind a parent!  As of yesterday, Sam was still alive and well, though the battle is far from over.  Amy Wilson observed a long defense of Sam from a rogue loon that thankfully ended with the attacker being driven off.
But it will undoubtedly be back.

Later that day there was a report of another hawk attack on the younger Justintime, and apparently little Justin' wasn't as fortunate as Sam.  Justintime hasn't been seen since, including during a thorough search by the Thorpe's on Saturday for the Loon Preservation Committee's annual loon census.  And the loss wasn't due to lack of trying by the parents, as they were doing their best to protect their offspring.
So here is one more look at Justintime, with many thanks to Debby.

It's a tough life for New Hampshire's loons, but I can understand why they choose to reside here in spite of the difficulty - it's such a beautiful place to live.

Posted by Scott Powell at 3:38 PM No comments:

Both of our loon pairs have now hatched a single chick, and both sets of parents are attentive to the needs of their little one; there is lots of noise out on the lake as they fend off various threats from approaching loons to approaching boats.
But when they are left alone they are quiet and diligent in their fishing endeavors, finding tasty little morsels for the chicks - sometimes fish, sometimes insects or tiny crayfish.  The second chick, from the nest in Harris Cove, has been named "Justintime" by first-observer Ron Naso, and was photographed by Debby Crowley on the same day it first appeared.

After hatching Justin', one parent went back on the nest to tend to a second egg while the other returned to guard duty, but after another day went by, the loons had abandoned the nest and there was no second chick.  A later inspection found a second, intact egg still in the nest.  An earlier inspection of the Bryant Island nest after that family left also revealed a second egg, but this one was in the lake, several feet from shore.

Did the loons push it into the water after they decided it wasn't viable?  Both eggs were retrieved and frozen, and will be studied by the LPC, so more information may be forthcoming.

Loon Preservation Committee biologist Henry Stevens saw bands on one of the parents from the Bryant Island nest, so I believe that Sam is the offspring of our long-term resident female.  As Sam grows, the family's world is expanding.

Sam's parents took an evening fishing expedition by our house on Friday, giving us a chance to observe them fishing, and teaching hungry little Sam how it's done.

Note that LPC biologist Henry Stevens will be the featured speaker at the Lake Wicwas Association Annual Meeting, which will take place in the Wicwas Grange on Saturday, August 4th at 9:30 am.  Harry is monitoring Lake Wicwas this year so he will have lots of interesting information to share about our loons and their behavior - all are welcome to attend.  (Plus, there is always great food and coffee!)  Hope to see you there! 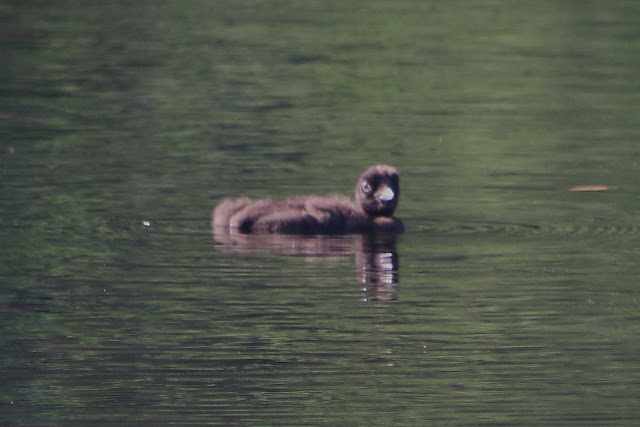 Posted by Scott Powell at 4:29 PM No comments:

The second nest, the one located in Harris Cove, has produced a chick!  It was first reported by Ron Naso yesterday, July 12, and one parent is back on the nest anticipating a second egg to hatch.  More news to come on Sunday....

Posted by Scott Powell at 7:56 AM No comments:

(I'm posting early this week so people on the lake will know to be on the lookout for a new loon chick.)

Our first loon chick hatched on Independence Day, 2018!
This, the nest on Bryant Island, produced only one chick;  an upcoming inspection of the nest by a Loon Preservation Committee biologist may determine if there was a second egg.  Russ Brummer first spotted the little chick and was given naming rights, and Amy Wilson was there to record the moment.  After much consideration, he named the chick "Sam".  Russ explained that it could be Samuel or Samantha, we will never know, but at any rate, it's Sam, and it can even be "Uncle Sam" considering the day of its arrival!
There are many threats that the parents will have to defend against for the next several months, including eagles, snapping turtles, large fish, and even other loons.  It does have the benefit of hiding under a parent's wing or riding on a parent's back for its first couple of weeks, but it's a pretty tiny and vulnerable target at this point.
And if the parents feel threatened by something they know they can't repel - a boat for example - they will dive, leaving the chick completely exposed to any attack, so it's important to give them lots of space.

Within hours of hatching the parents were already having to fight off a lone loon that was approaching their territory - a successful defense, but only the first of many.  It will be a challenging and exhausting time for the new family.

One predator they will keep an eye on but probably won't be a threat is the osprey, as they consume almost exclusively fish.  The osprey's talons and diving technique are perfected for plunging into the water, feet first, to grab fish up to several feet below the surface.  On the same morning the loon hatched I saw an osprey observing the proceedings from a perch high on one of the islands. 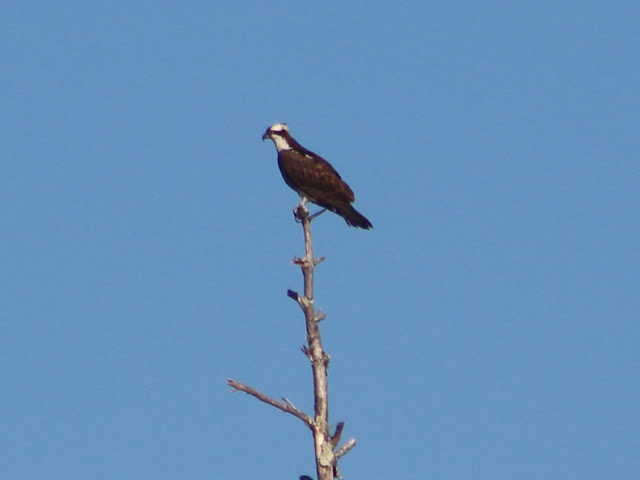 At one point I thought it was rising up to take flight. 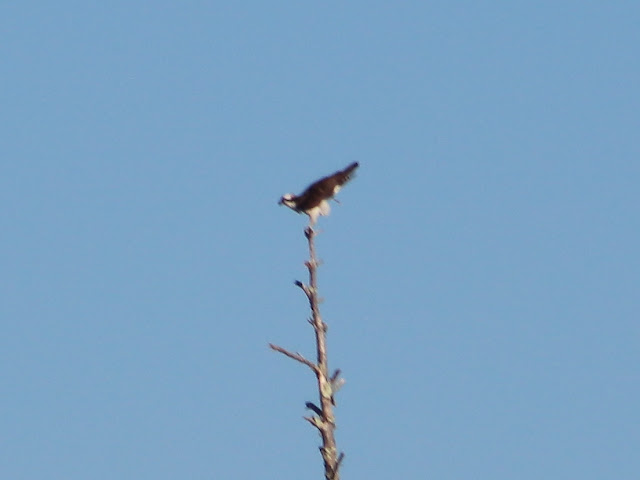 But it turned out it had other business to take care of.

Over the next hour it took several sorties around the lake, including one where I was close enough to see it in action as it circled, swooped down, talons ready for the catch, but then must have lost its target, as it arced back up and circled off empty handed. 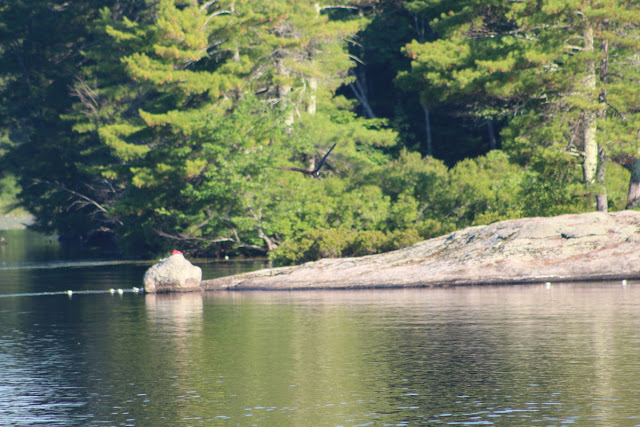 The white head of an osprey can look like a bald eagle, but the white body, lack of a white tail and the smaller size are key distinguishing features. 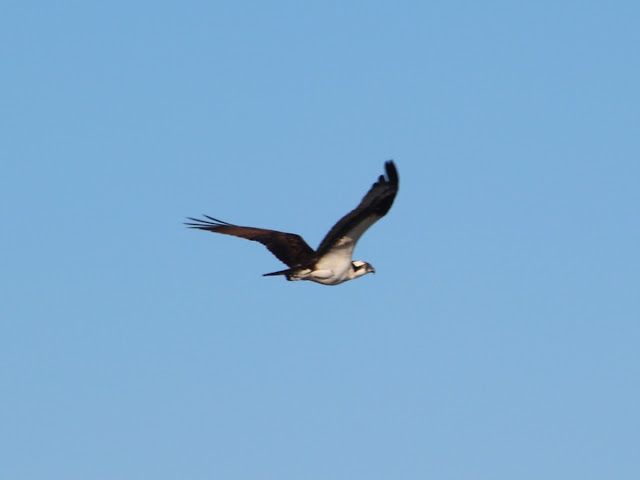 You won't have any trouble distinguishing a Great Blue Heron from just about anything.  Its slow wing flap, crooked neck, and long legs poking straight out behind are pretty distinctive. 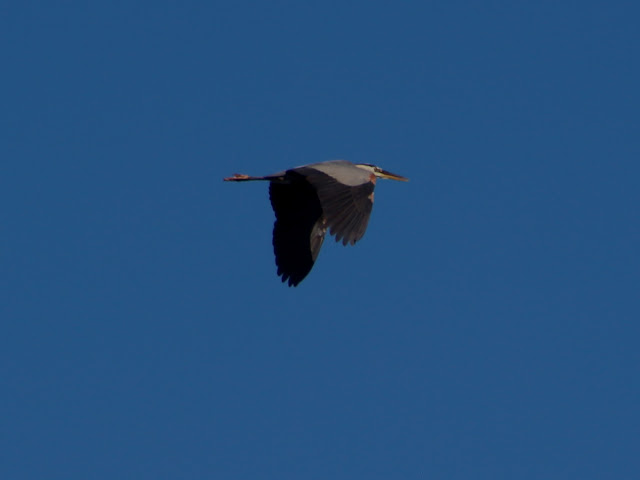 There are lots of birds around the lake at the moment, and likely more loon chicks to hatch this weekend, so please be aware if you are on the water on any of New Hampshire's lakes.


Posted by Scott Powell at 9:45 AM No comments: