It is a warm, calm, late June day on the lake. The water has cleared very nicely now - after the pollen of a few weeks ago, visibility is a good nine feet. Although I've seen lots of deer around the past few weeks, I found my first sign of moose this morning with fresh droppings on the trail.

On the recent warm nights we've hear the Barred Owl hooting nearby. Much less enjoyable are the Deer Flies, which are out in full force. Walking the trails I find dozens hovering in the sunshine where the trees let the light through the canopy, until they detect me coming, at which point they zip off to dive bomb my hat.

The blueberries are still mostly green with just a few starting to turn purple - it won't be long now. It was very sad to have the loons nesting attempt fail, but two days ago we saw them acting very strange - swimming very fast together in tight formation just under the surface, darting around side-by-side like penguins. We could see their white bodies just a few inches below the surface, occasionally breaking the surface, making a sharp U-turn with a violent splash and wave of water (this is what first attracted our attention). Perhaps this is mating behavior and they are going to attempt a second nesting.

Just before noon today I went for a run to check the status of the beaver dam that is being rebuilt after last summer's dam break. On the way I found three deer feeding in a field. It was 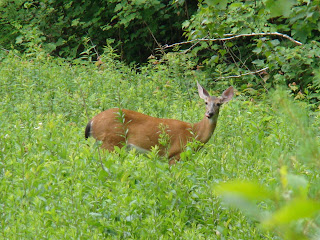 humid and overcast at the time, not too warm, which accounts for the unusual time of day to see them. Chuck told me later that at just about the same time of day he saw a young fawn crossing Marion Lane, though he didn't see any adults near by.
Posted by Scott Powell at 9:01 AM No comments: