All I can say this week is, wow - there is a lot of snow.  Two more storms this week, and even after a day of rain and two days in mid 40's, the snow pack is still incredibly deep.  There was too much time spent clearing it away to do much trekking around in the woods, but here's one picture that gives the idea. 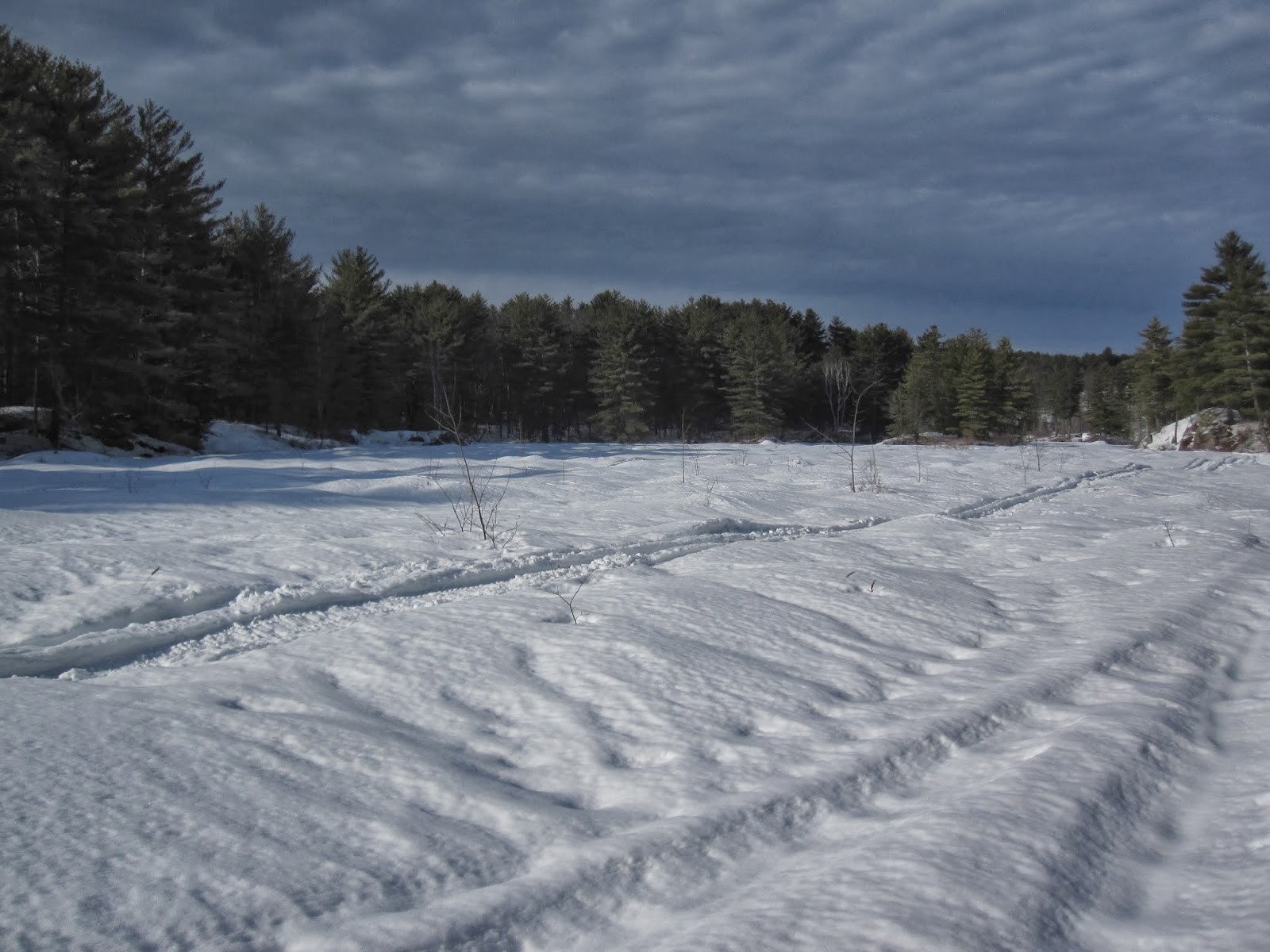 This marsh has bushes that are probably two to three feet high in the summer, and they are completely covered.  Only the tallest saplings show now.  Here's the same marsh, from almost the same location in the late summer. 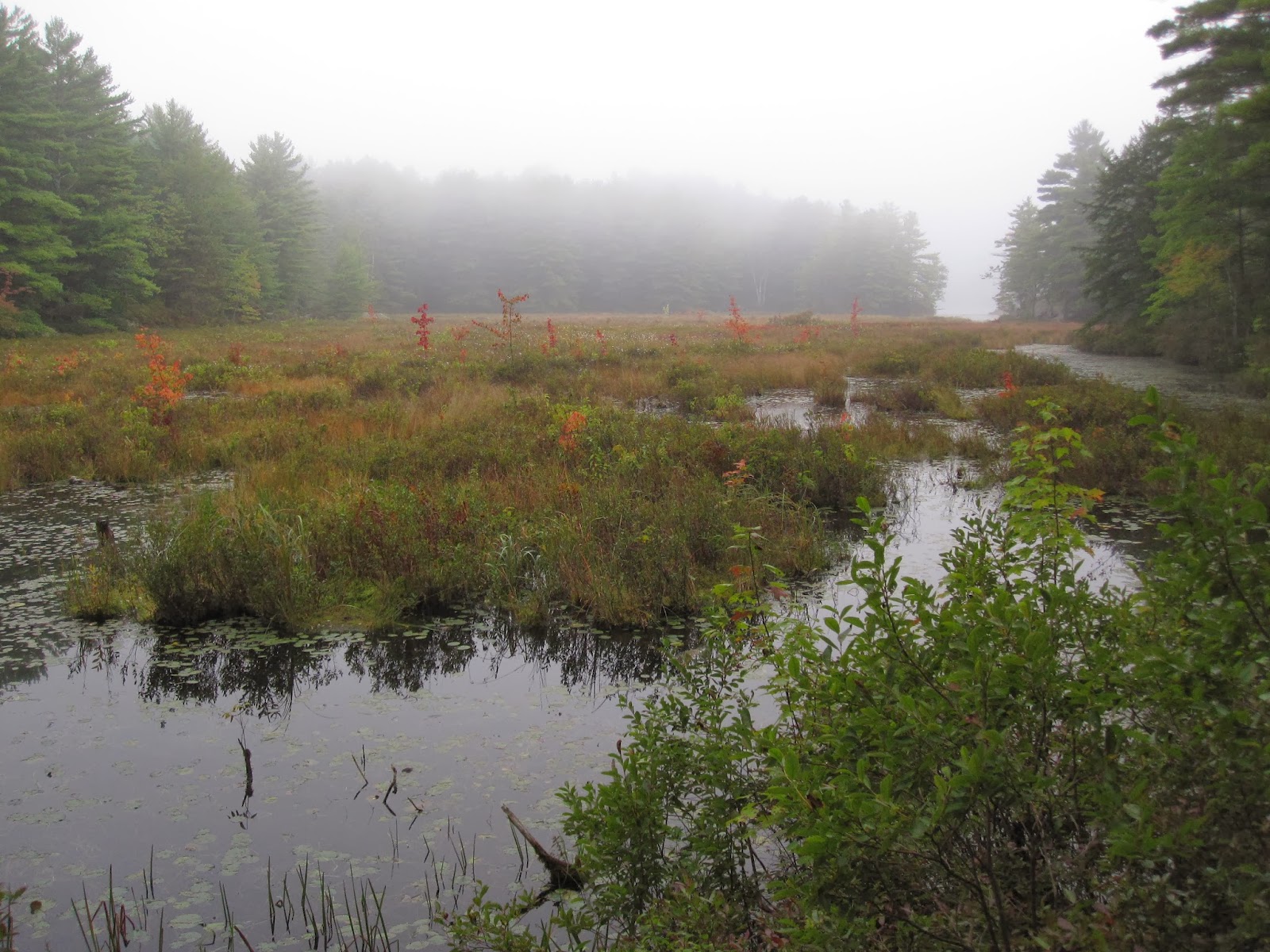 And that was when the water was high - at this point the water level is a good 12 inches lower.

Another couple of weeks like this and we'll have to shovel just to look out the windows! 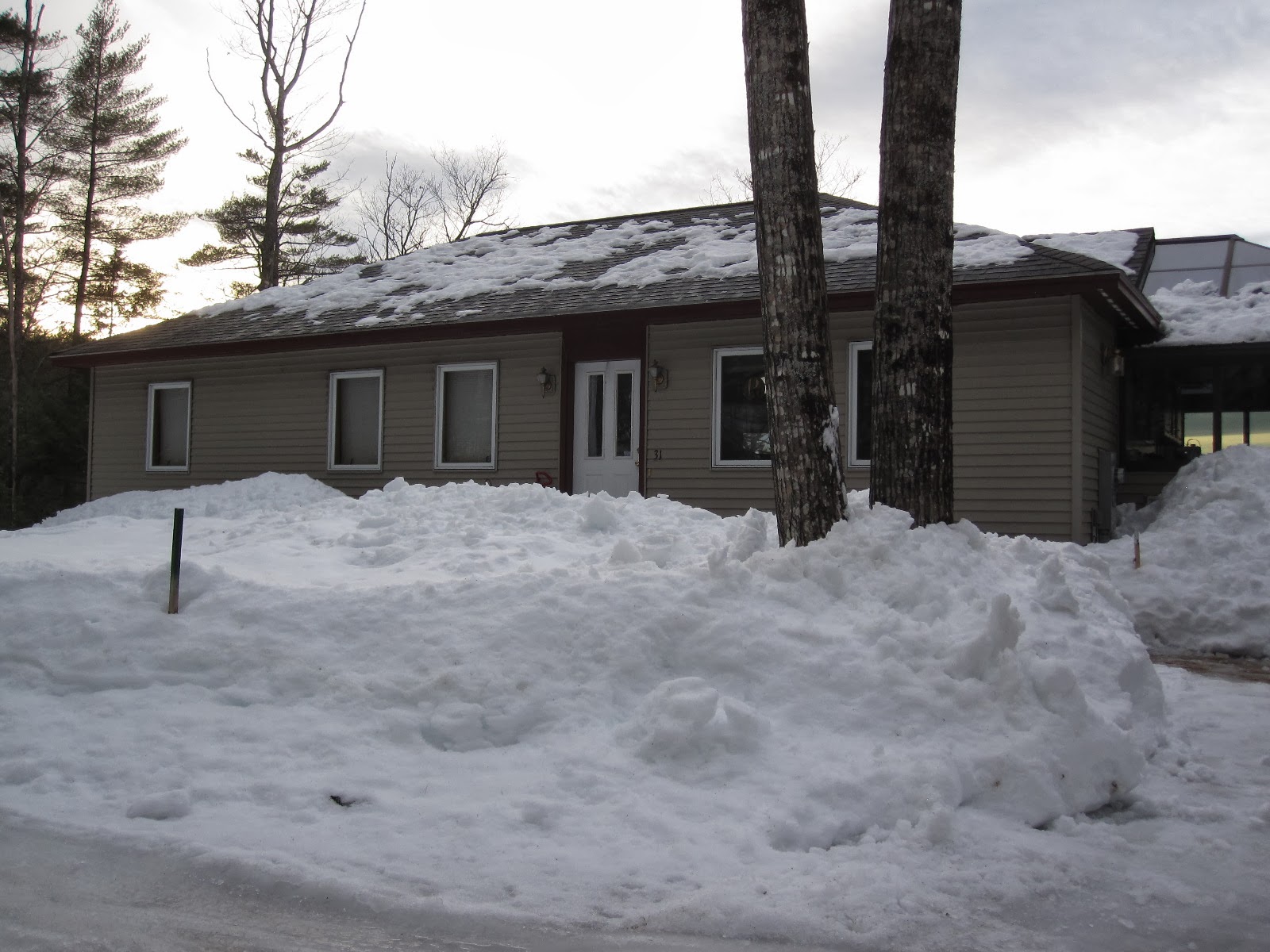 Posted by Scott Powell at 8:26 PM No comments:

The Wicwas Olympics are here.

Another serious dump of snow gifted us with over a foot on Thursday, making for a sweet Valentine's Day with some epic New England skiing on Friday, and will serve the region well for the upcoming vacation week.  2014 is looking like a good year for the ski industry.

Unfortunately a bit of sleet mixed in at the elevation of Lake Wicwas which put a little crust in the middle of the snow pack.  This made for some noisy snow shoeing, and difficult skiing in the woods, but the skiing on the lake was great.  We took a snow shoe trip in the Hamlin-Eames-Smyth area on Saturday, and were happy to follow a snowmobile track for a good ways.  The sticky snow made for beautiful winter scenes even though it was an overcast day with flurries in the air.

Along the way we discovered that the otters were partaking in the winter olympics, competing in the bobsled events.  We saw some olymipic-length otter slides, going right across the Blue Trail around the Beaver Ponds.


We followed them a bit, as they wound under trees and around stumps, forming a pretty nice bobsled run. 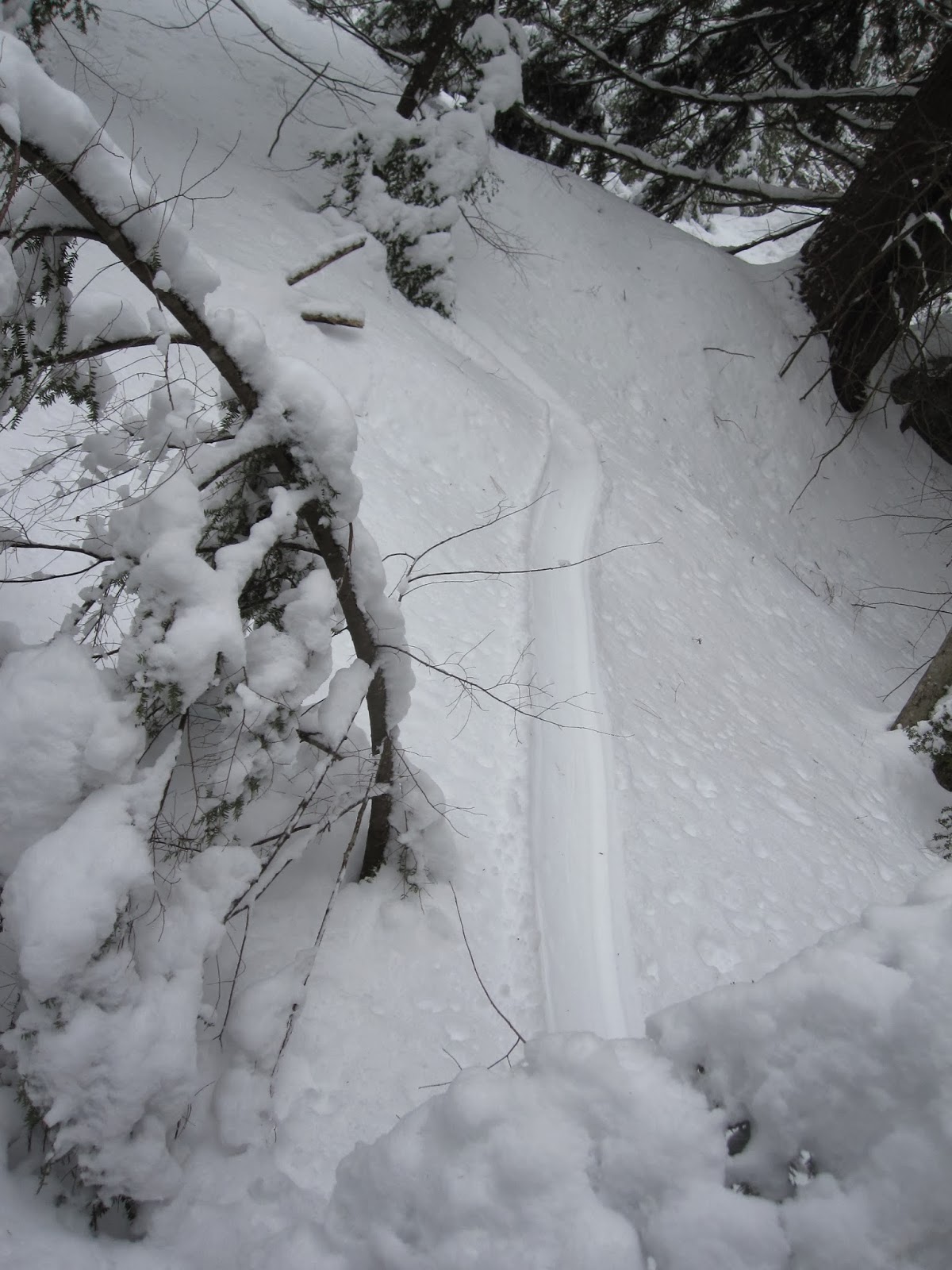 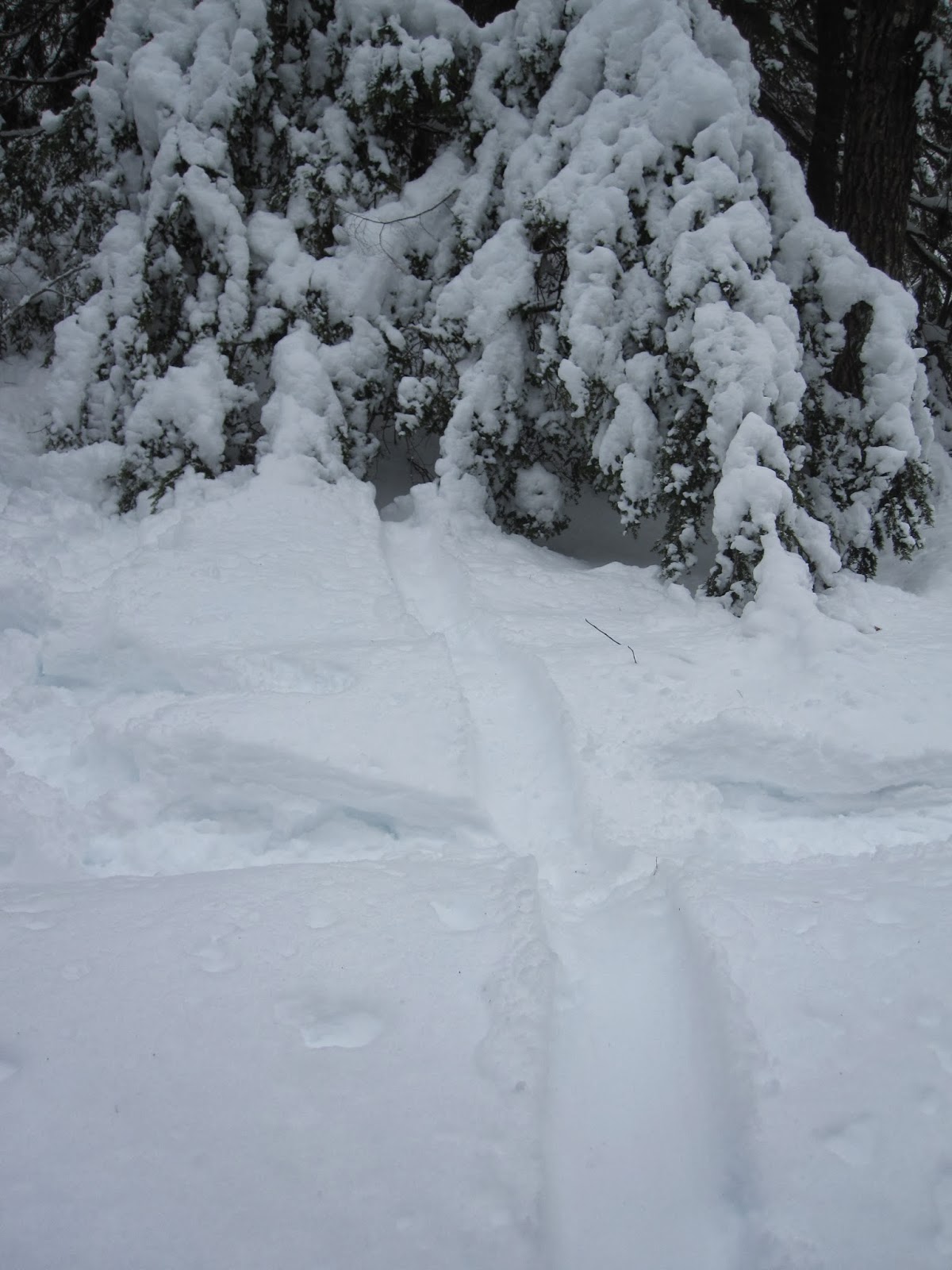 They would slide a good 30 yards along a downhill grade without a foot print to be seen.  Then on the flats, a few pushes with their feet kept them moving while still sliding on their bellies.

We crossed their path again, this time where they were heading back up towards the upper beaver pond, now having to climb.  Maybe rather than the bobsled, it is more like the Otter Winter Wild - up hill and down! 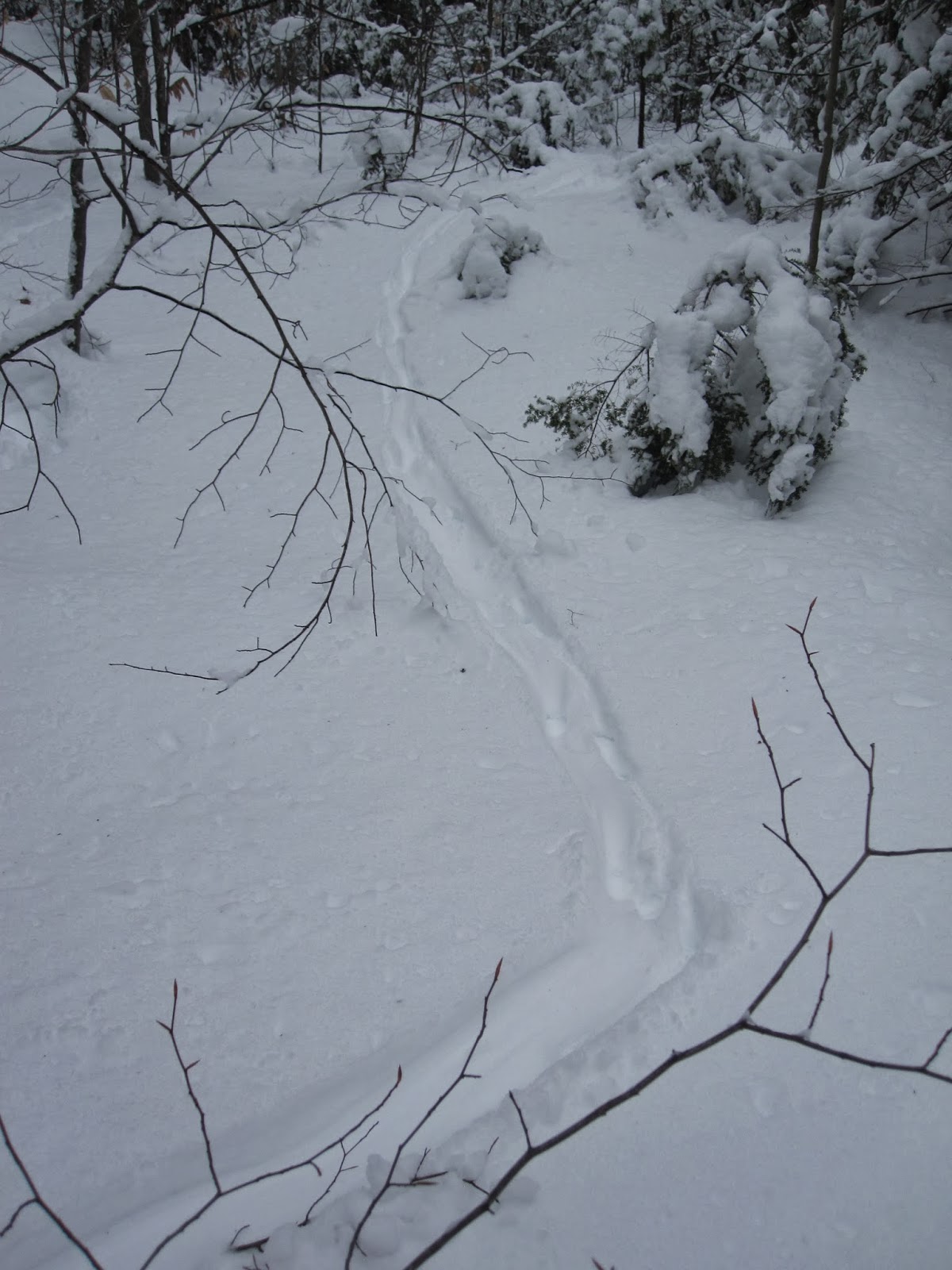 Back closer to home I saw the bobcat had visited again.  It came through the yard looking for tasty morsels around the birdfeeder, and then ran all the way across the cove in the wide-open to Sheep Island.  A dusting of snow Saturday night covered up all the tracks, so we now have a fresh canvas to go out and see what happens next.

A few more snow storms and there won't be any place left to put the snow - the piles are already getting high!  (Happy B-day, DP) 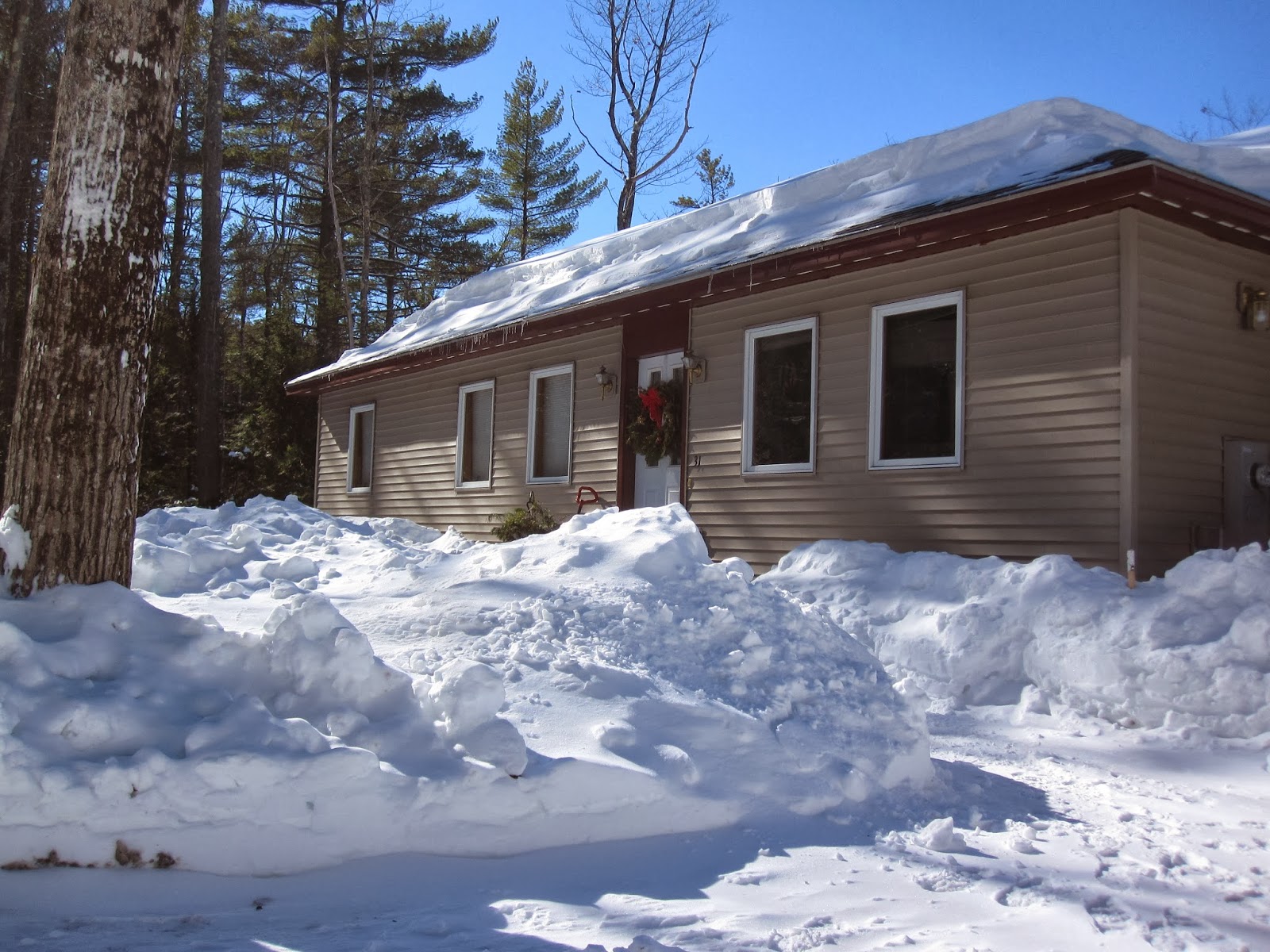 Posted by Scott Powell at 2:31 PM No comments:

Fresh snow at Lake Wicwas, and another beautiful winter weekend.  Snow fell on Wednesday, and cold temperatures kept things absolutely pristine right through today.  It was chilly, with lows down below zero over night, but lots of people were out enjoying winter activities in the bright sunshine.  With the Meredith Fishing Derby taking place this weekend, there was more traffic - and I mean traffic - on Lake Wicwas than I have ever seen.  There was a regular highway running down the middle of the lake. 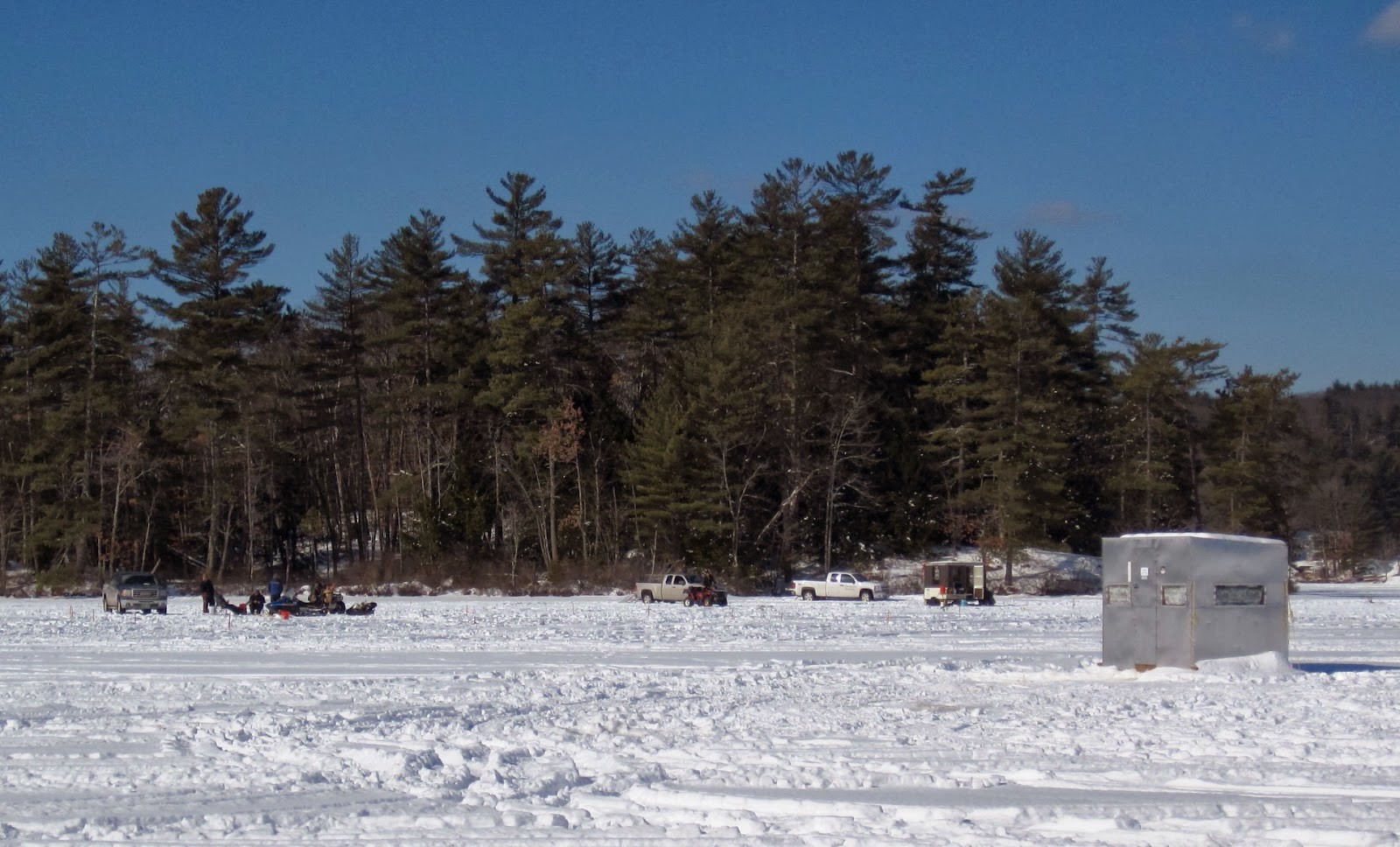 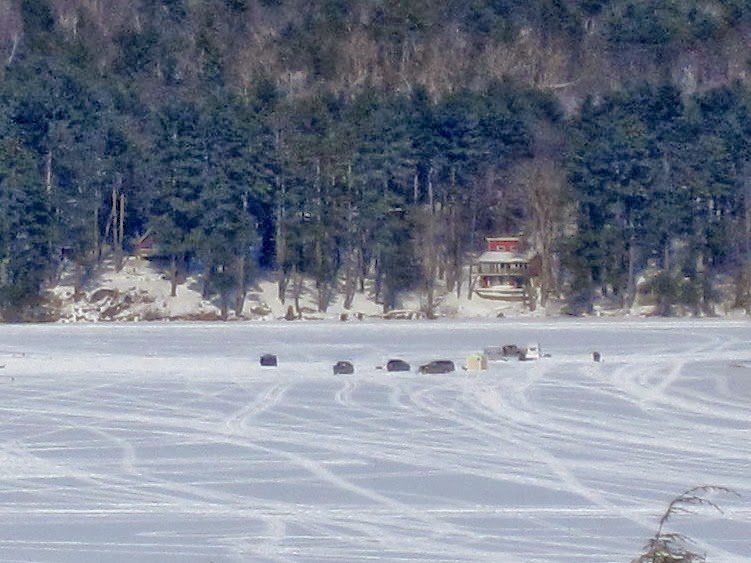 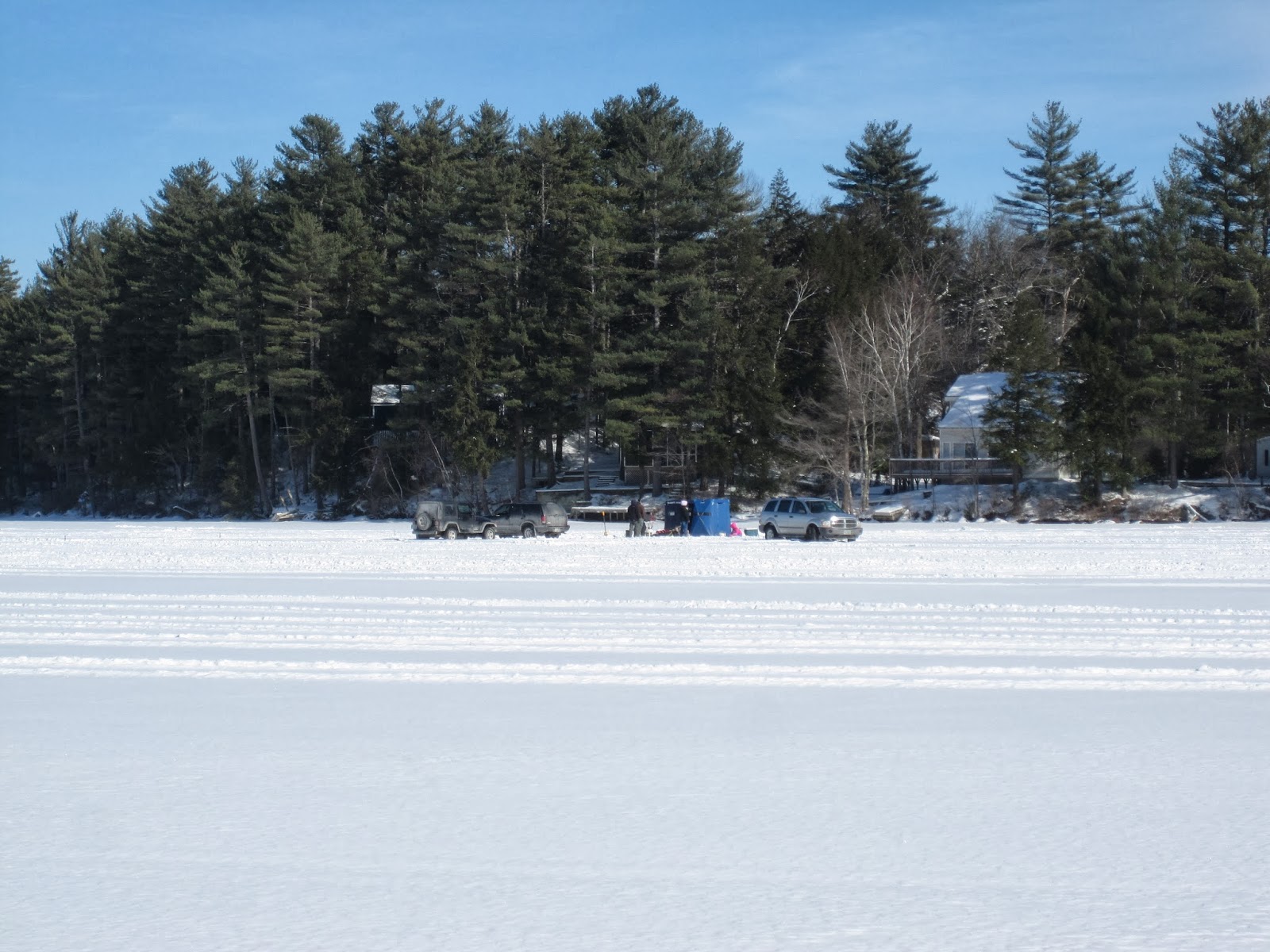 I took a ski trip in the Hamlin-Eames-Smyth conservation area and the conditions were fabulous.  I saw quite a few snow shoe tracks through the area, and some wildlife activity:  mink, weasel, fox, and mice.  The mountains were beautiful and the sky was cobalt-blue.

There was of course plenty of activity at the Fishing Derby headquarters on Meredith Bay, where the population was identified as 43. 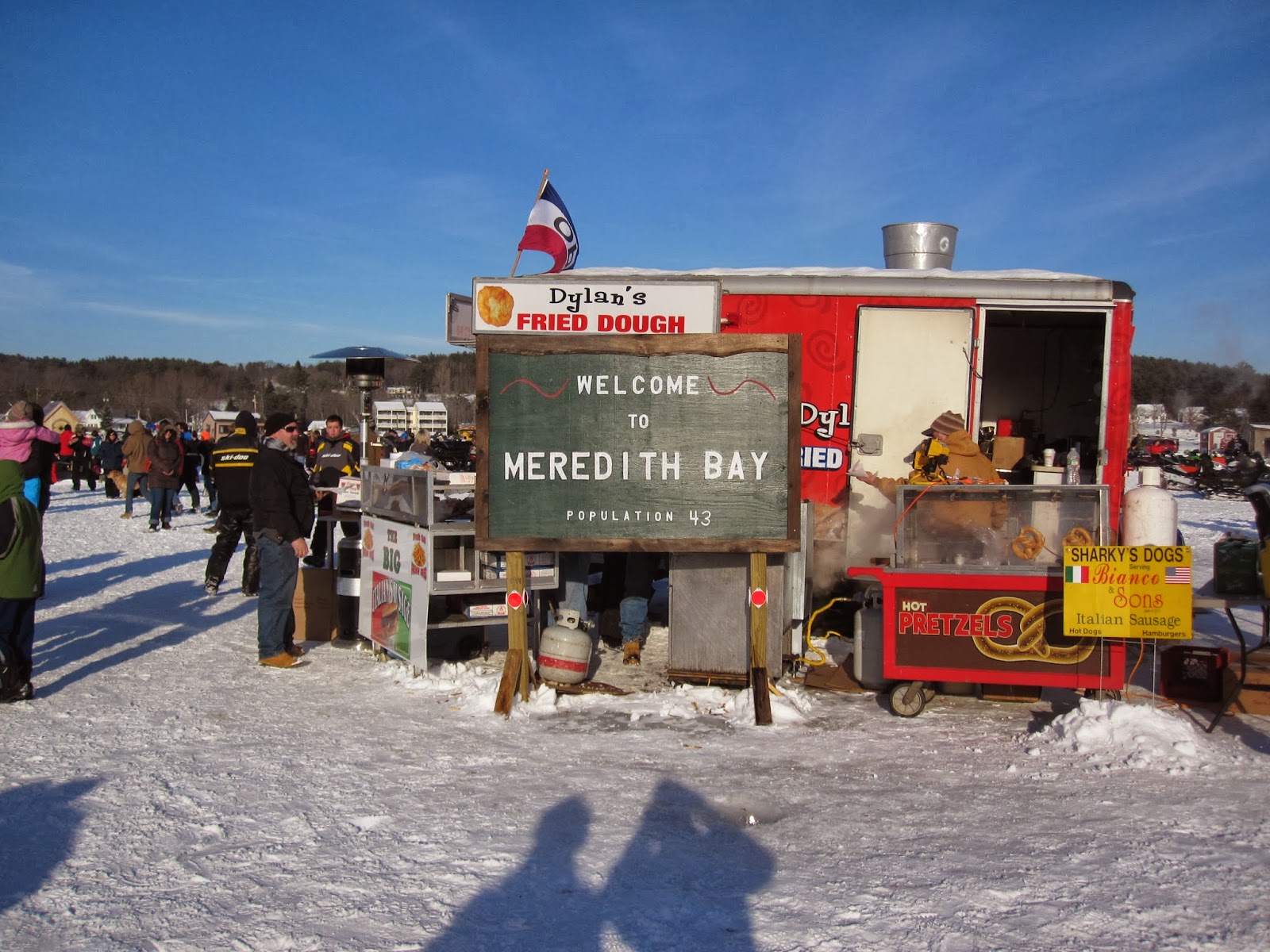 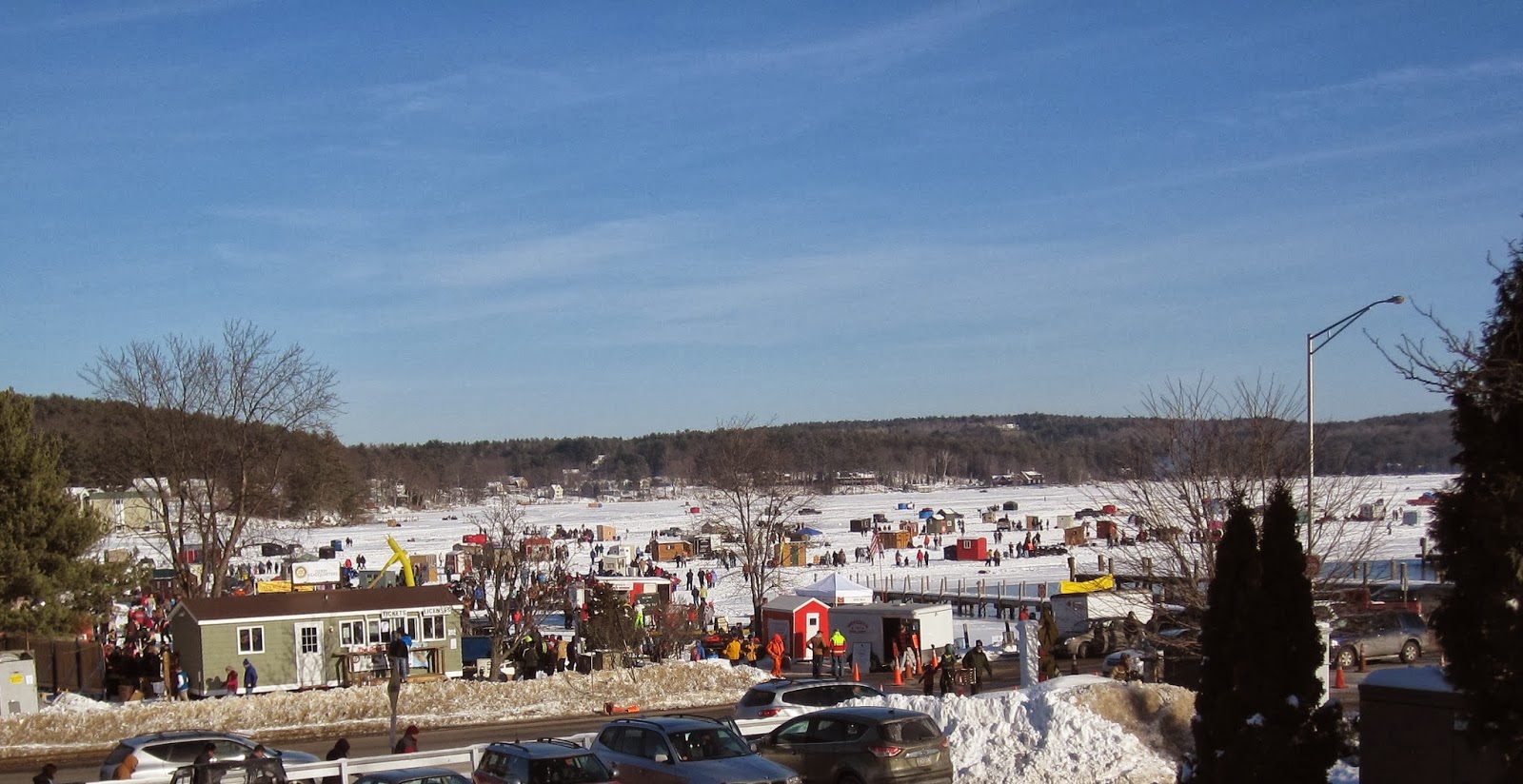 On the ice was the usual eclectic assortment of bob houses, from the high tech space-age moon habitat 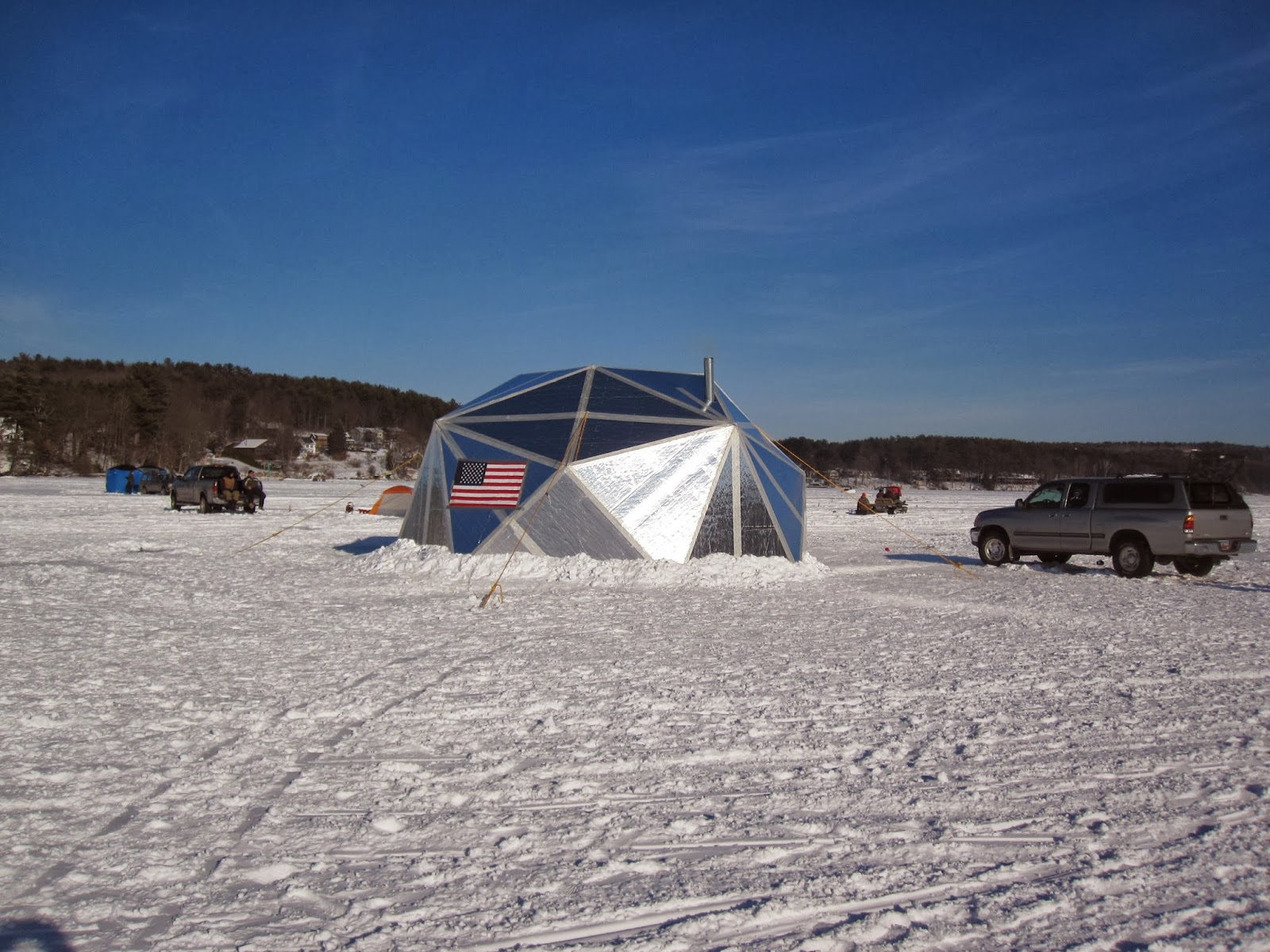 to the rustic back-country 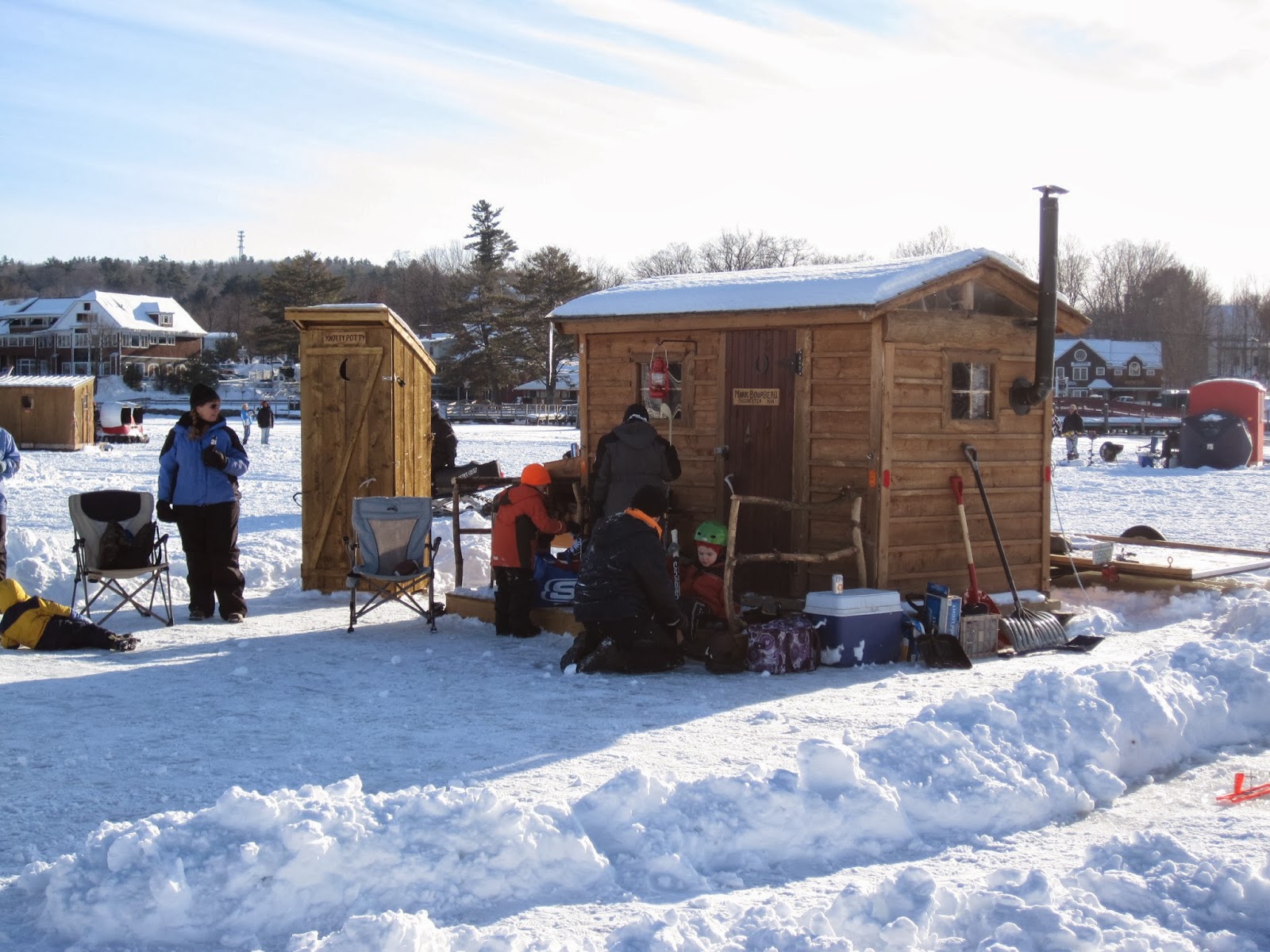 to the, well, I'm not sure how to categorize this one. 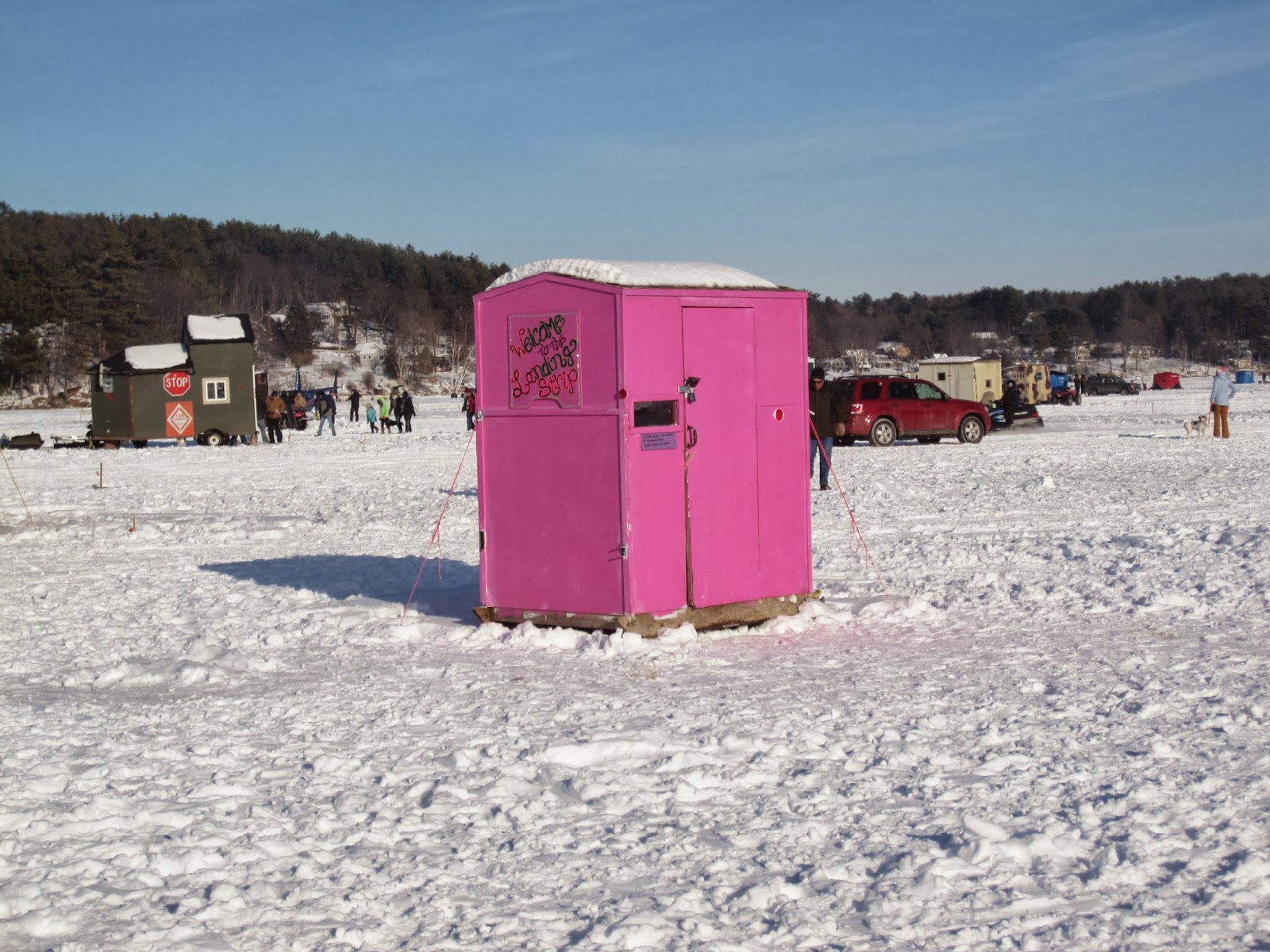 There were even patriotic people fishing the old fashioned way. 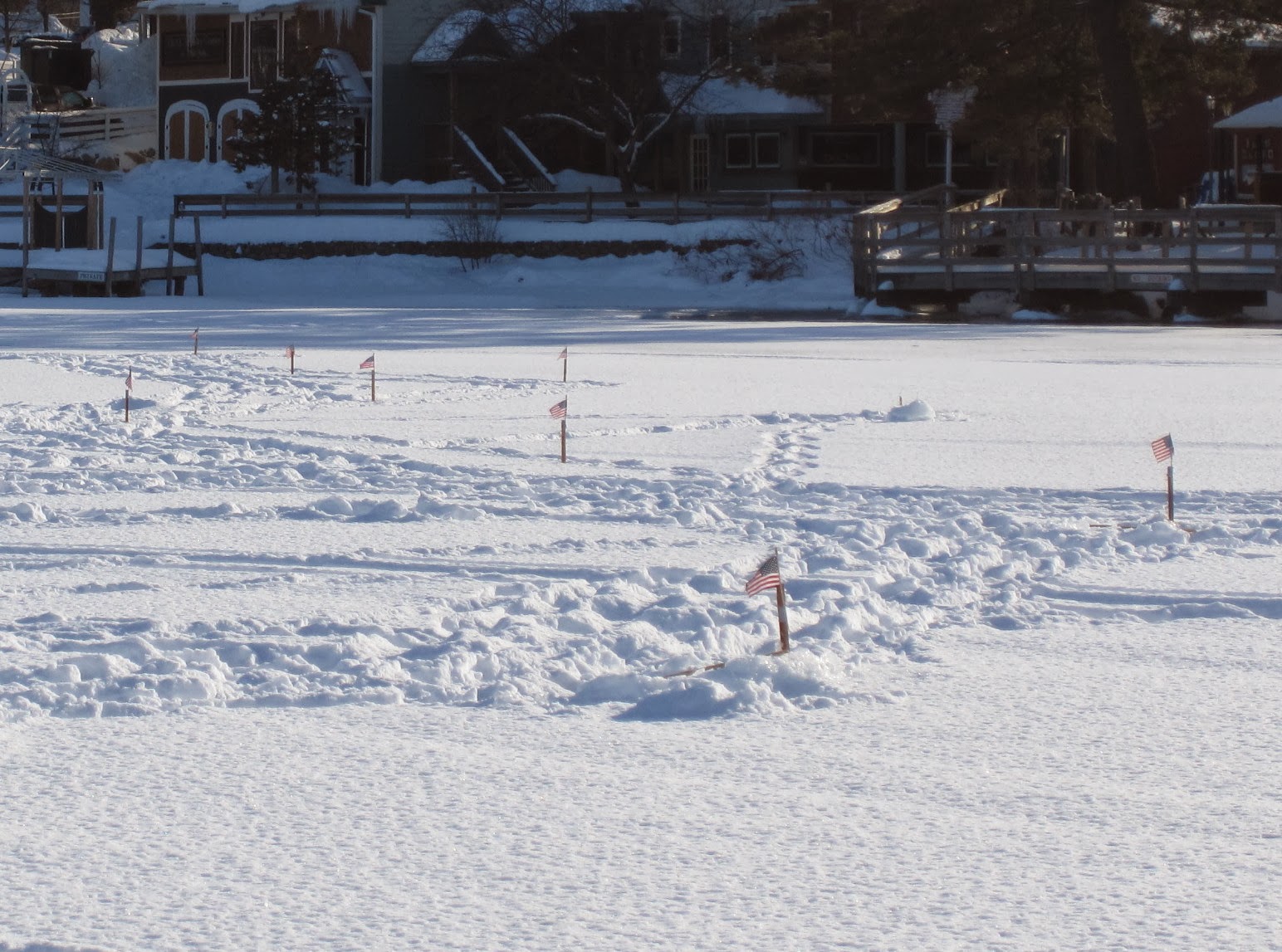 There were snow machines everywhere, including a new one for me 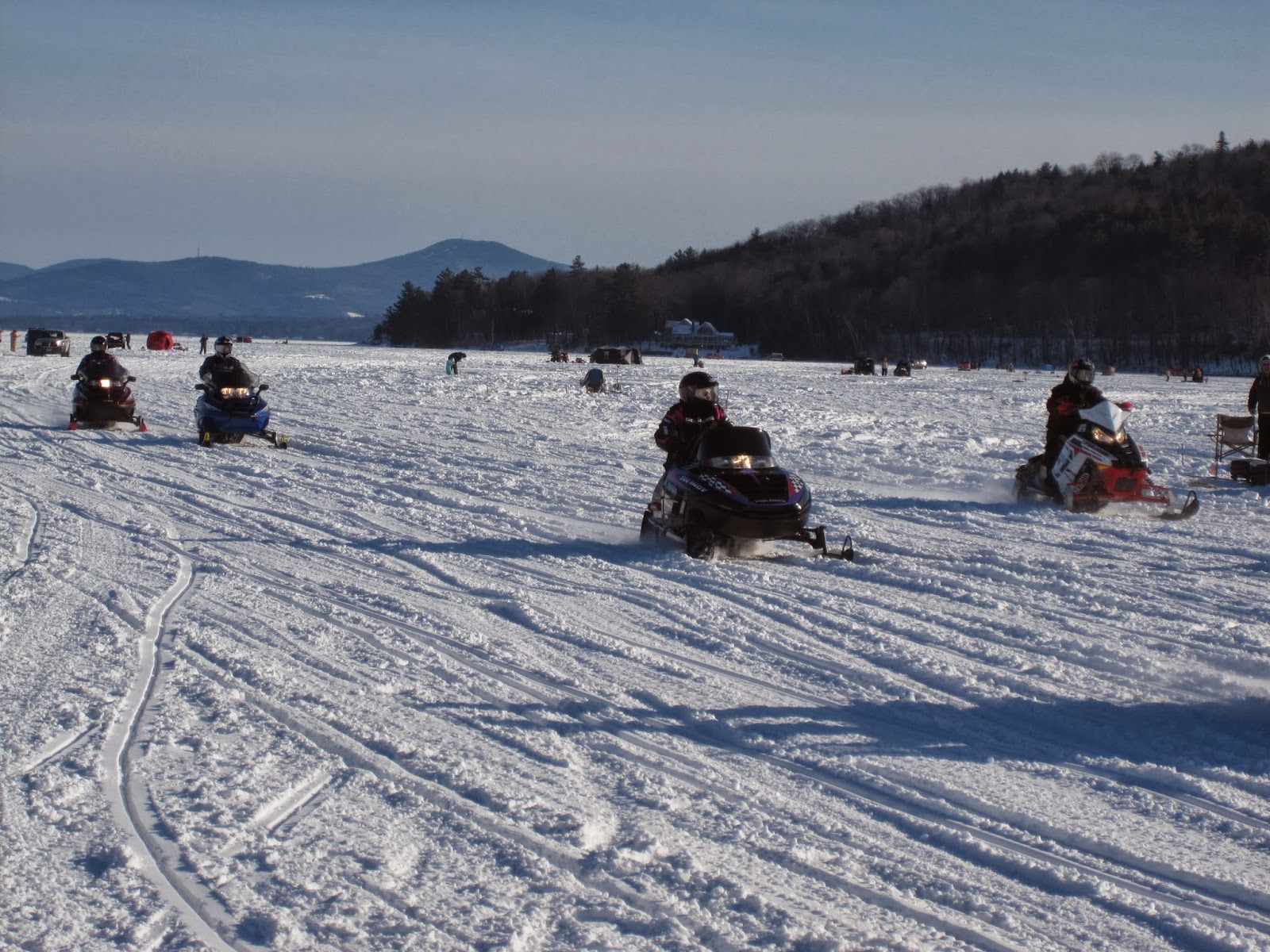 It was quite the active scene, fun to explore and watch 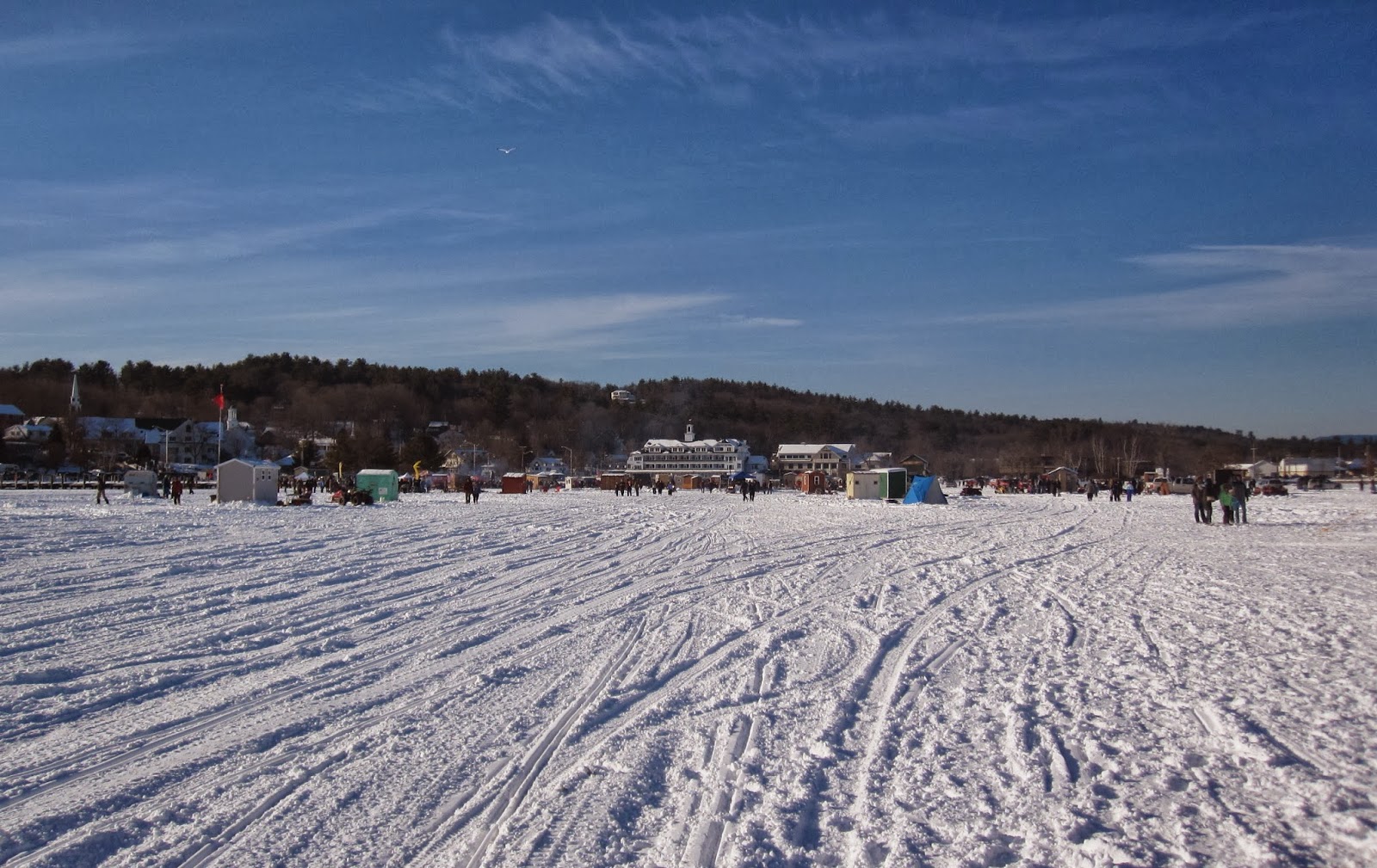 but still nice to come back to the peace and quite of Wicwas. 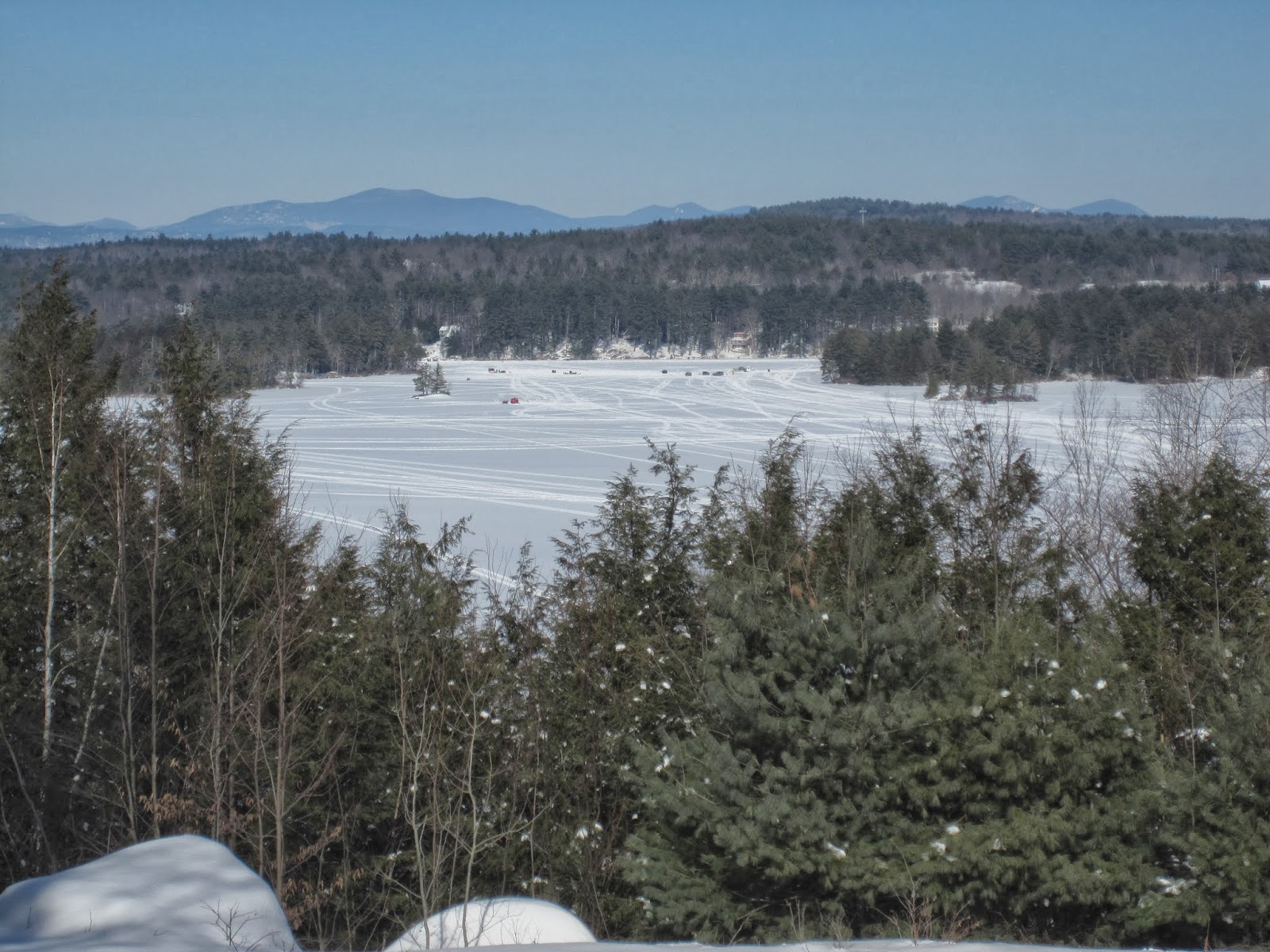 Posted by Scott Powell at 3:12 PM No comments: 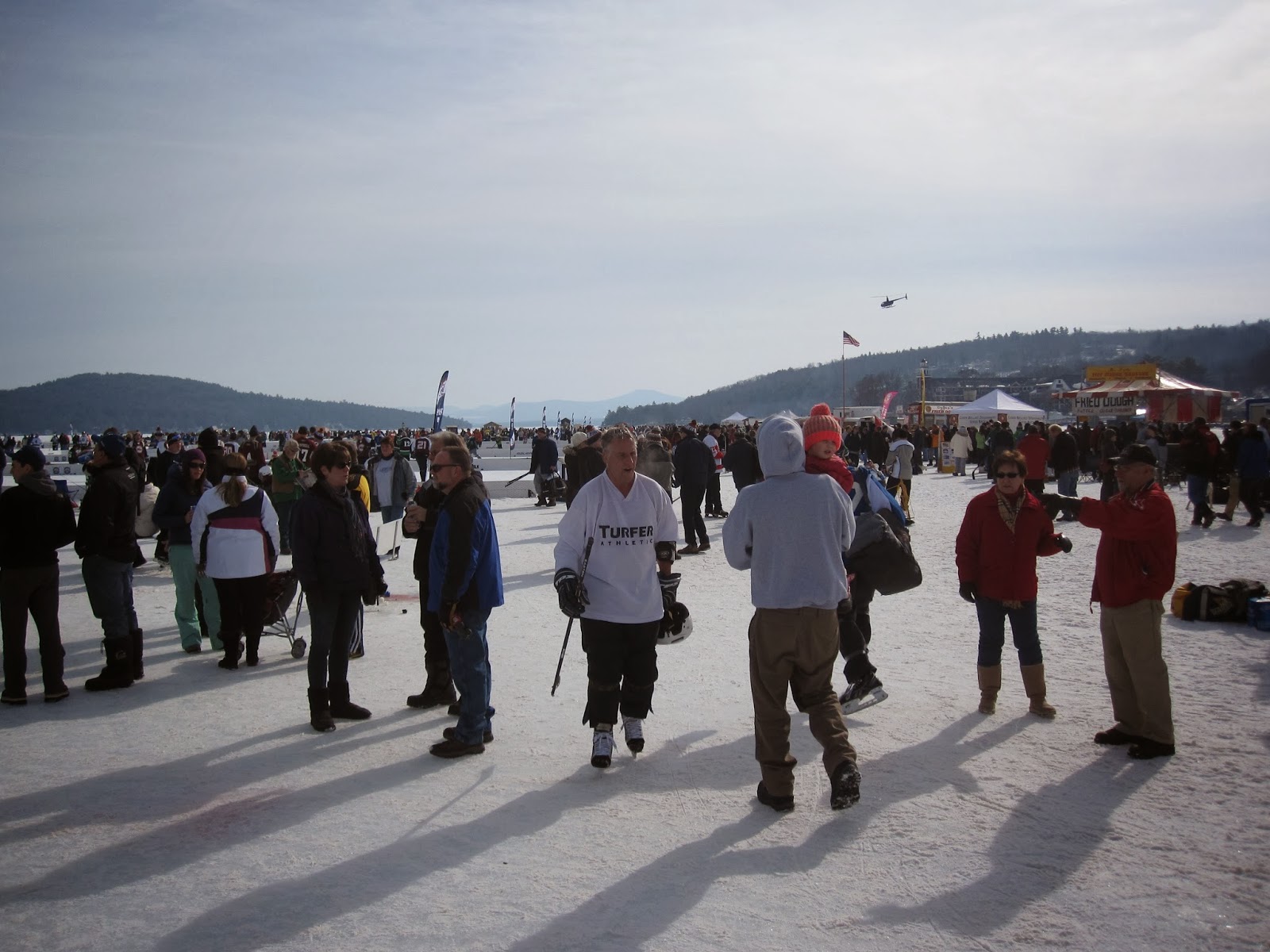 There was a lot of excitement in Meredith Village this weekend with the New England Pond Hockey Classic taking place.  This year there were 223 teams participating from as far away as Golden, Colorado, though most were from the New England area.  We visited on Saturday when the weather was perfect - everybody must have had the same idea, as it was packed.

$
The traffic in Meredith was as bad as a busy summer weekend, even though it seemed most of the cars were out on the ice.  I hope someone knows just how many trucks can park next to each other on 15 inches of ice. 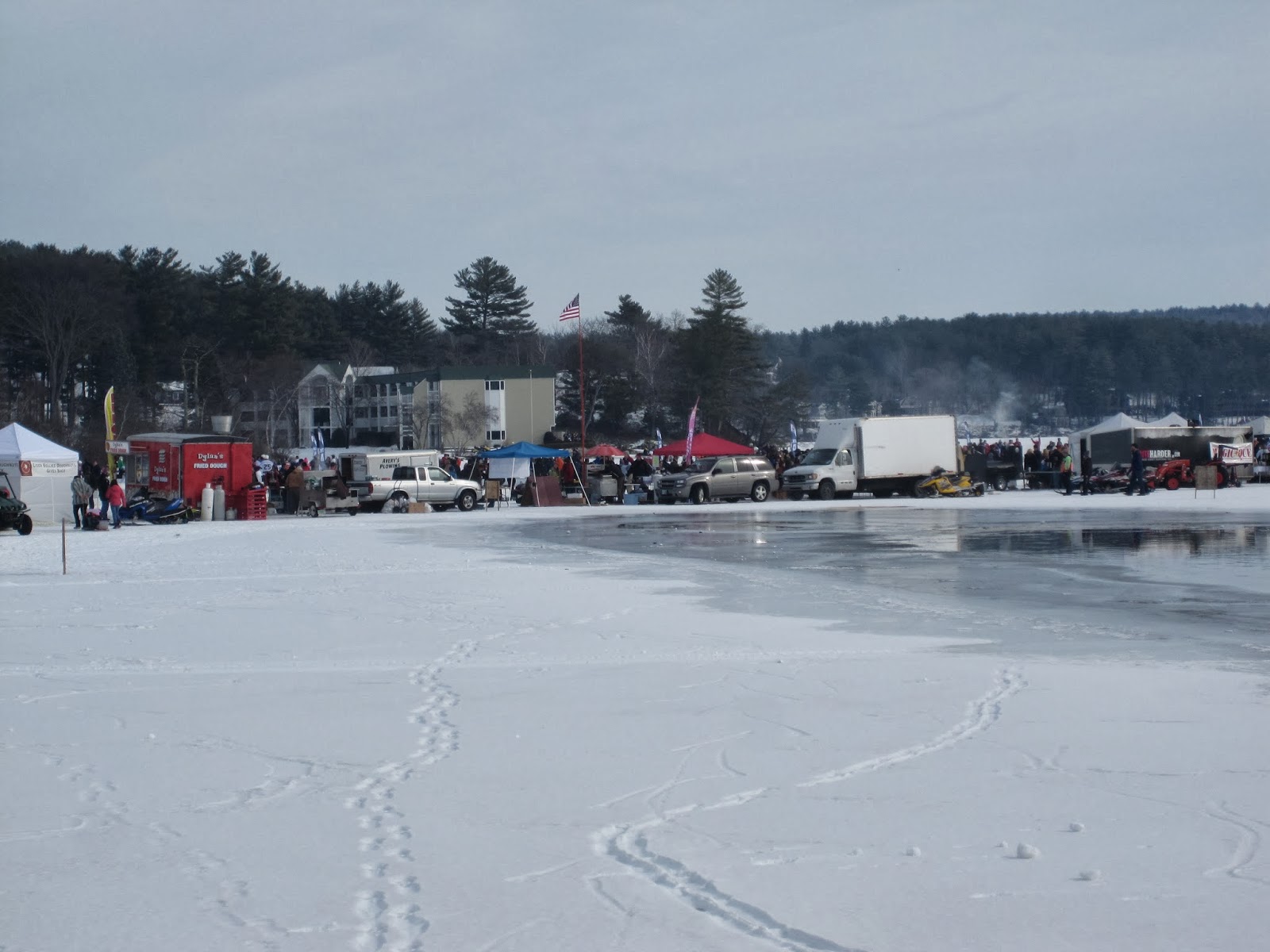 You could find just about any food you wanted out there on the lake.  It was quite the scene with helicopters flying overhead and every known form of winter transportation buzzing by on the surface. 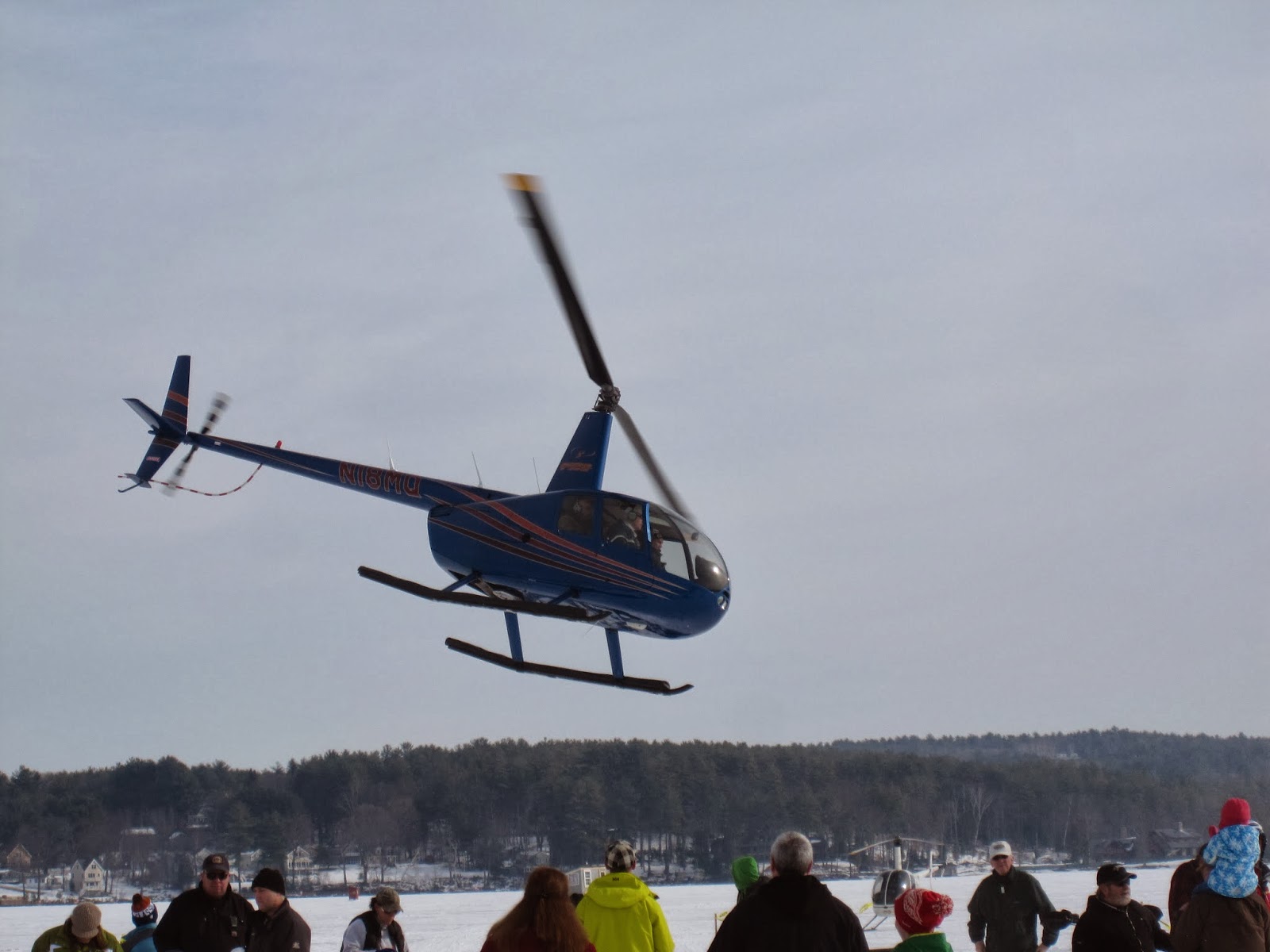 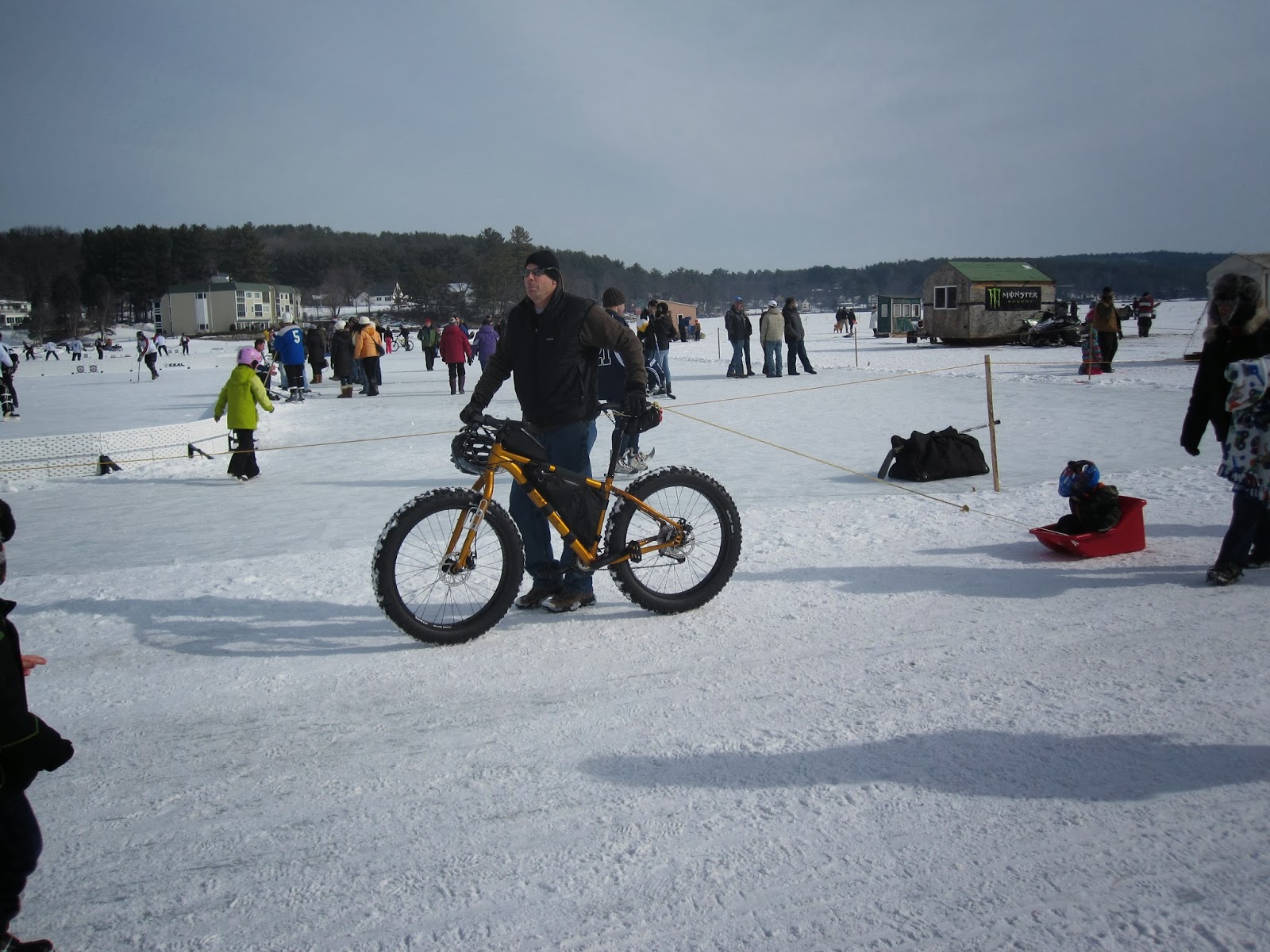 Oh, and there was hockey too - over 20 hockey rinks with games taking place on all of them simultaneously. 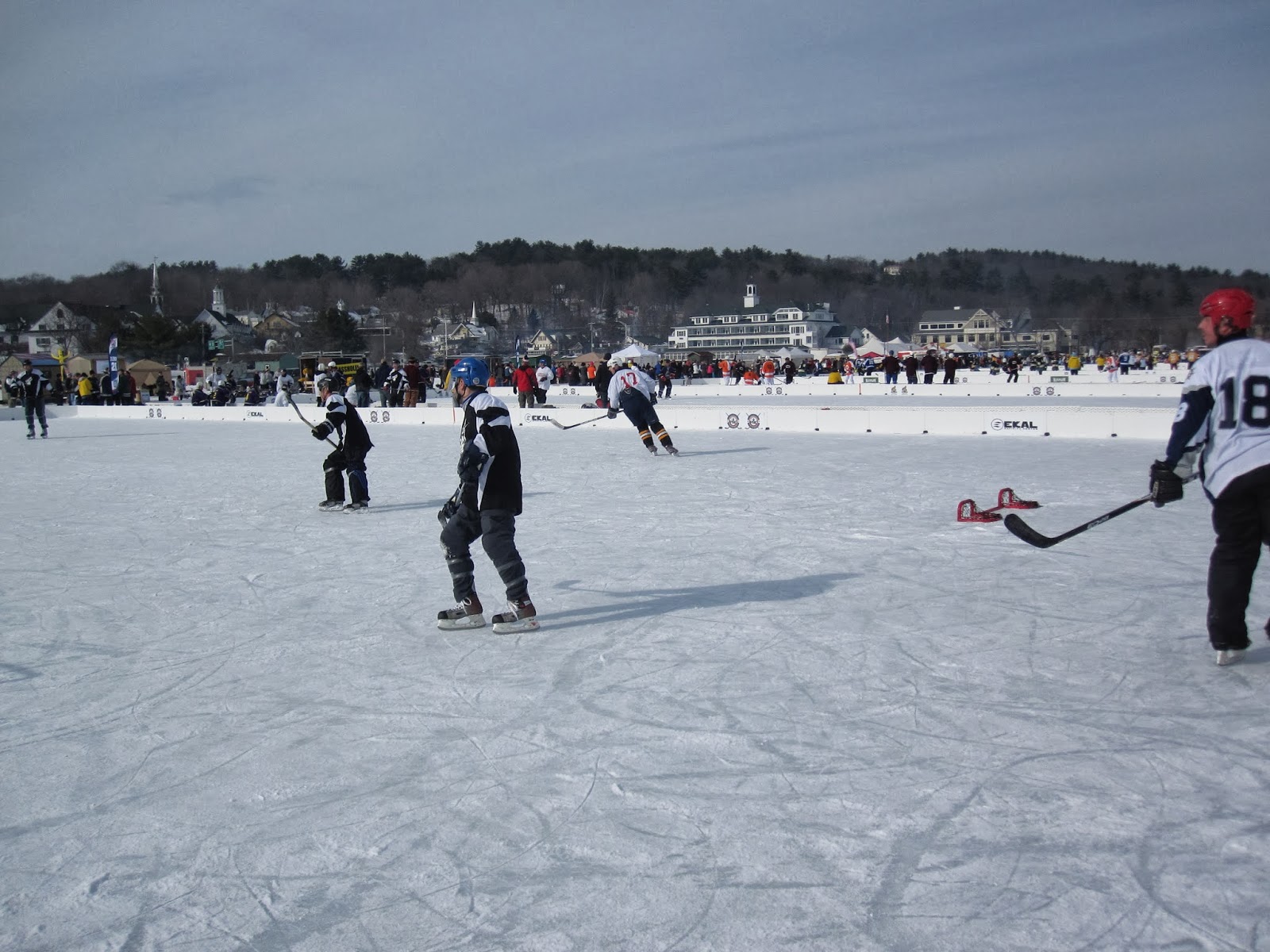 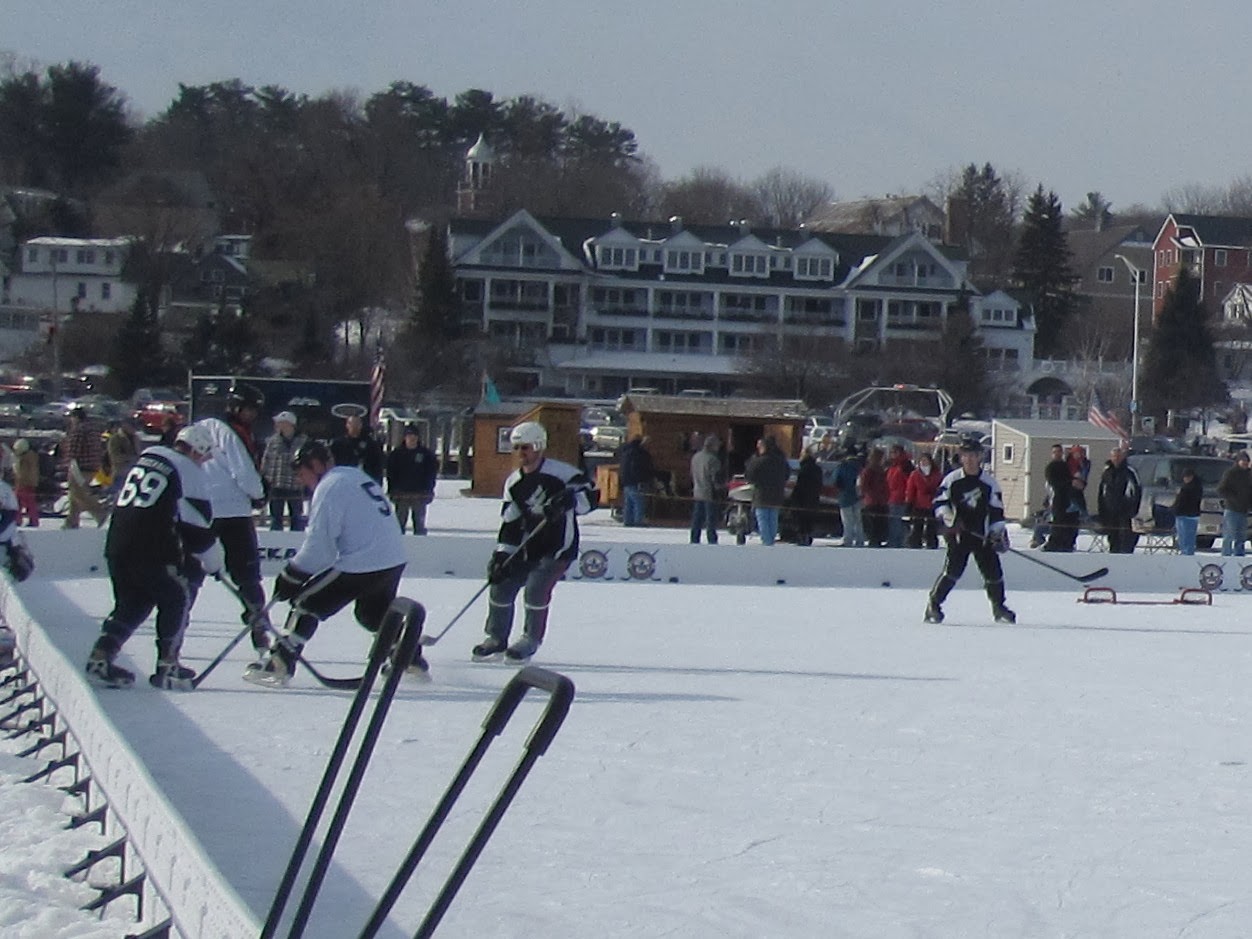 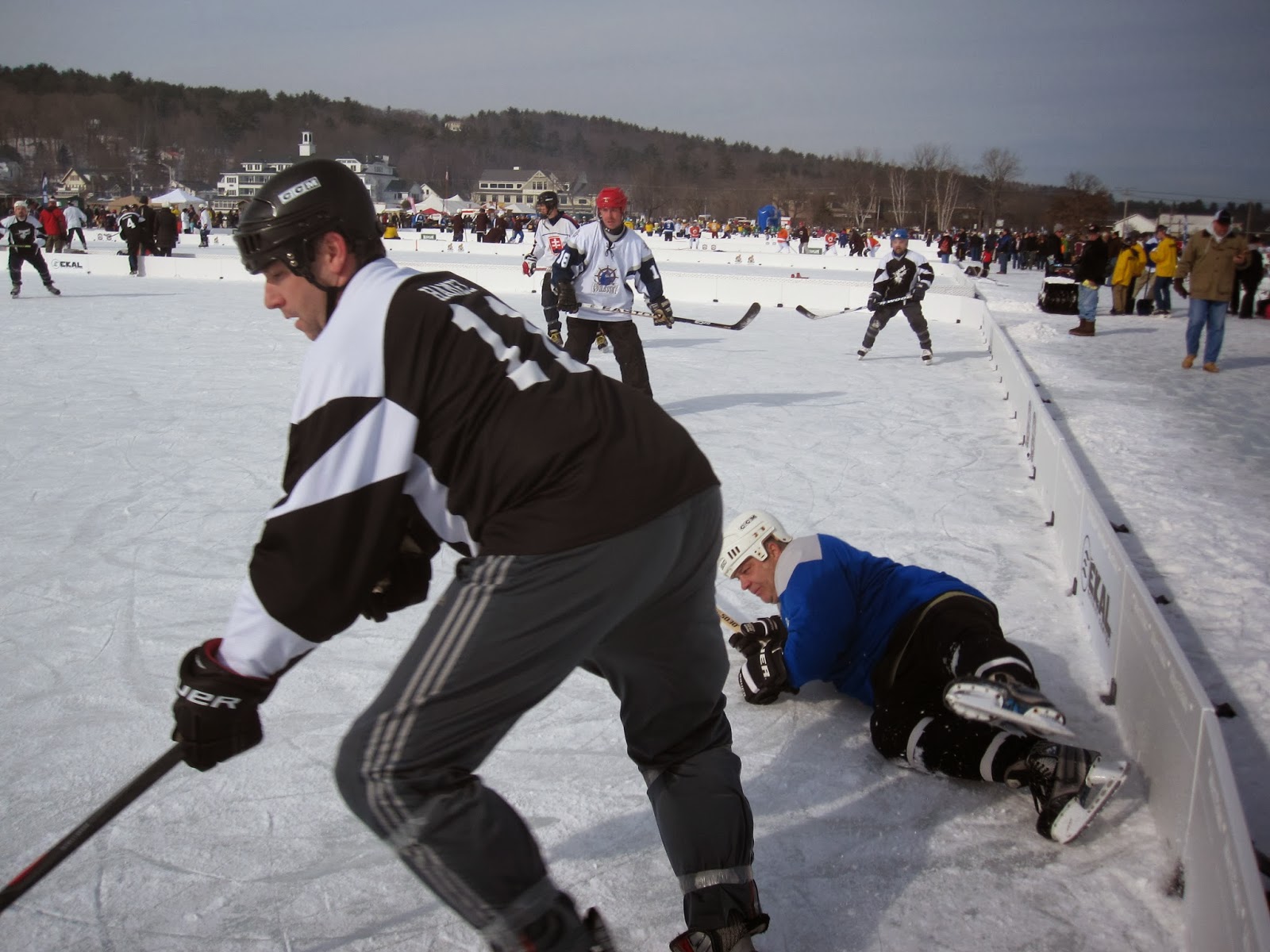 Back in Meredith Center it was much more serene, and with the pleasant weather I took a leisurely snow shoe to see what was happening around the lake.  I went to some common deer hideouts, but didn't see any tracks at all; I expect the deep snow and thick, sharp crust is keeping them to very local areas.  But I did find the New England Porcupine Classic.  Deep among the hemlocks there were tracks everywhere and the tell-take sign of a porcupine zone:  A carpet of cut hemlock boughs on the snow.

Looking around it was clear that they've been using this forest for a long time, as there were many hemlock trees denuded and grossly stunted in their growth by porcupines feeding on the same tree year after year.

Porcupine are like that - they find a tree they like and they will feast on it almost exclusively until there's nothing left.

I also came across a long, meandering trail of a Bobcat!  I didn't follow the tracks, but along my walk I must have crossed its trail a dozen times.  Bobcat tracks are often distinguishable by the toe drag they leave in snow.

Here a bobcat and a fox followed the same path for a few yards before going in different directions, which provides a good contrast of the different tracks;  the fox to the left, the bobcat heading to the right.
I saw a few mole tracks in the snow too, which would be a nice snack for either of these efficient predators. 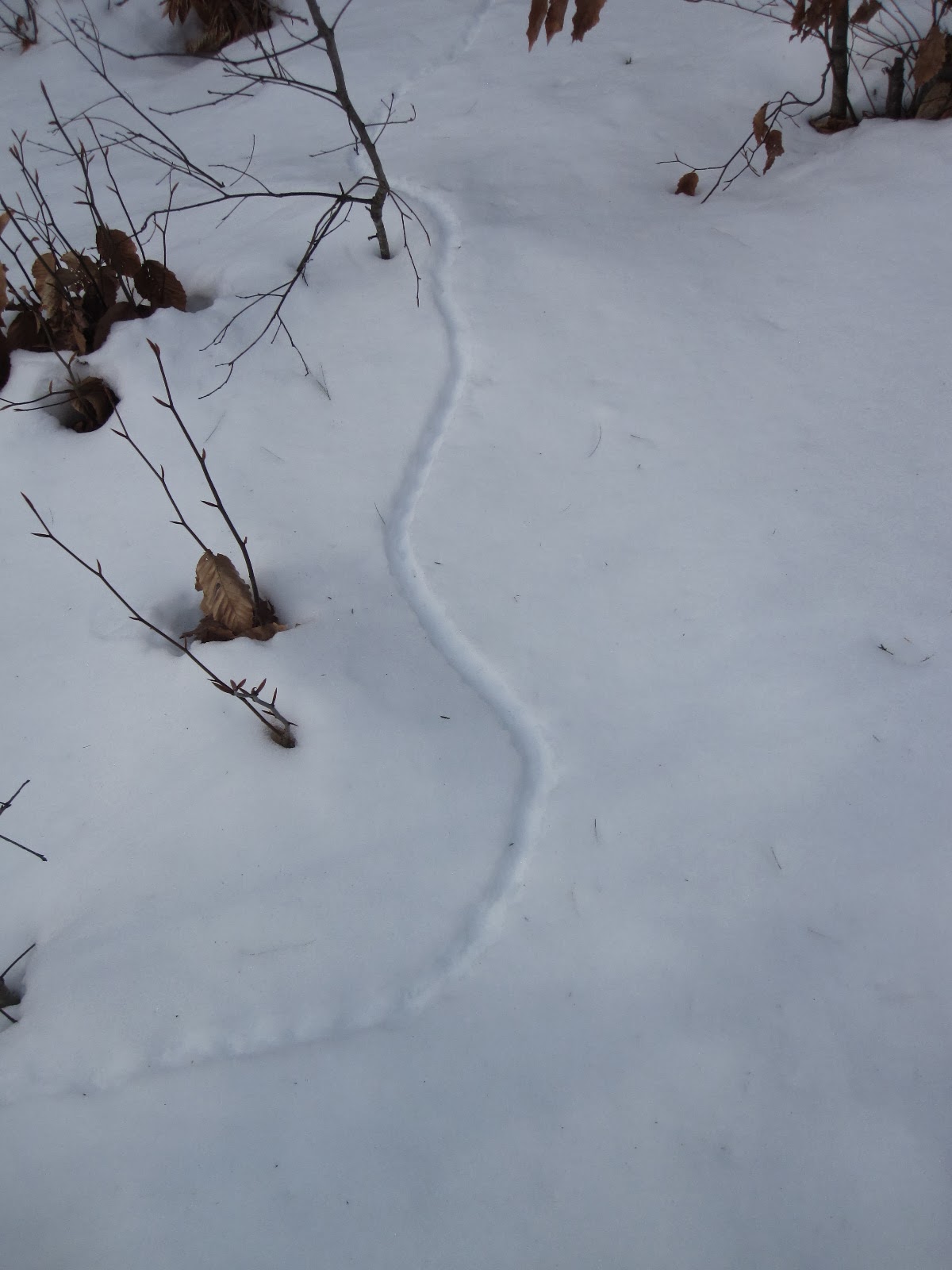 There were several other animal tracks along my journey, but this one was rather interesting:  A fox that was trekking straight across the lake suddenly decided to stop and leave its mark right in the middle of the lake, then continued on its way. 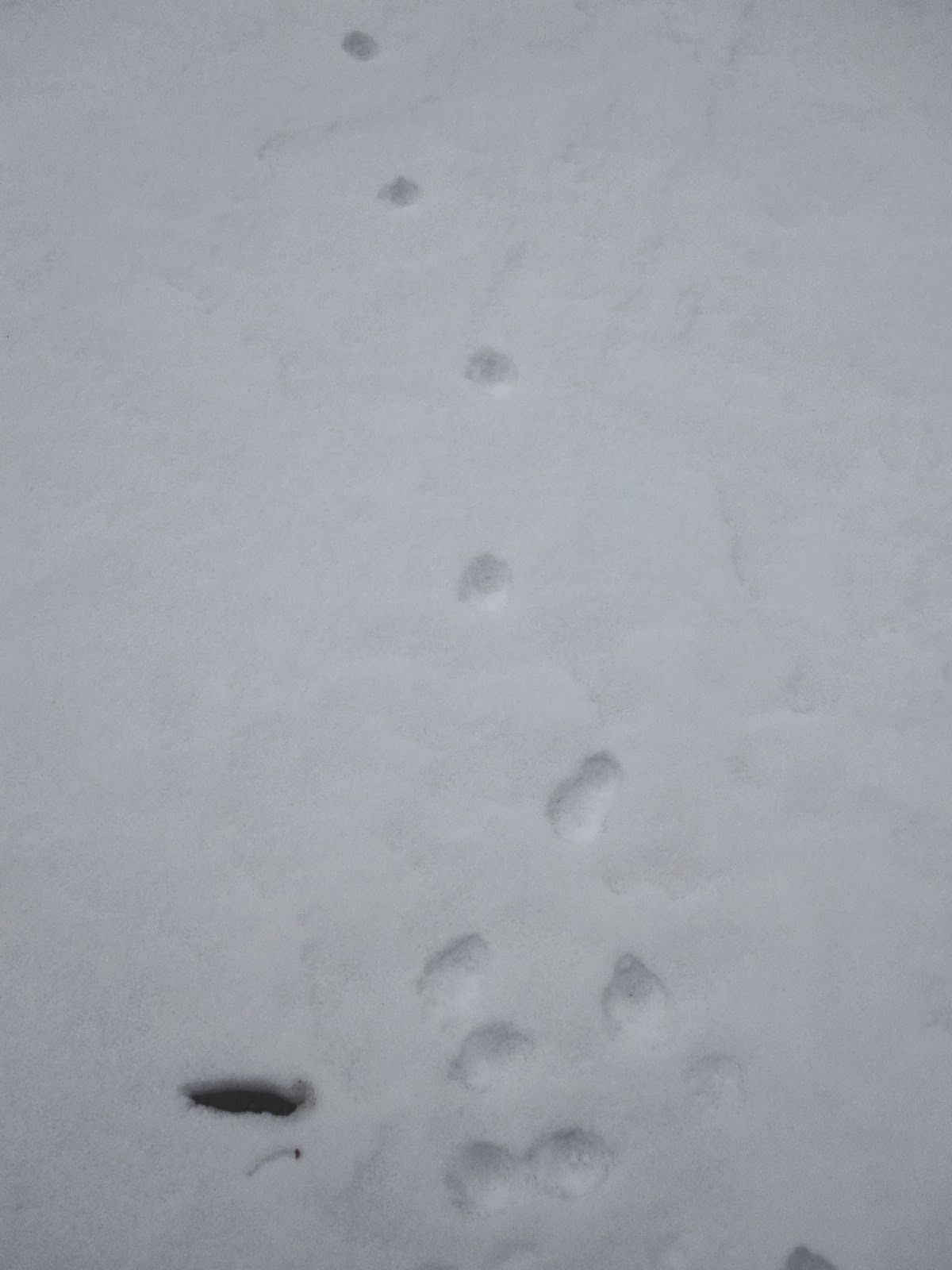 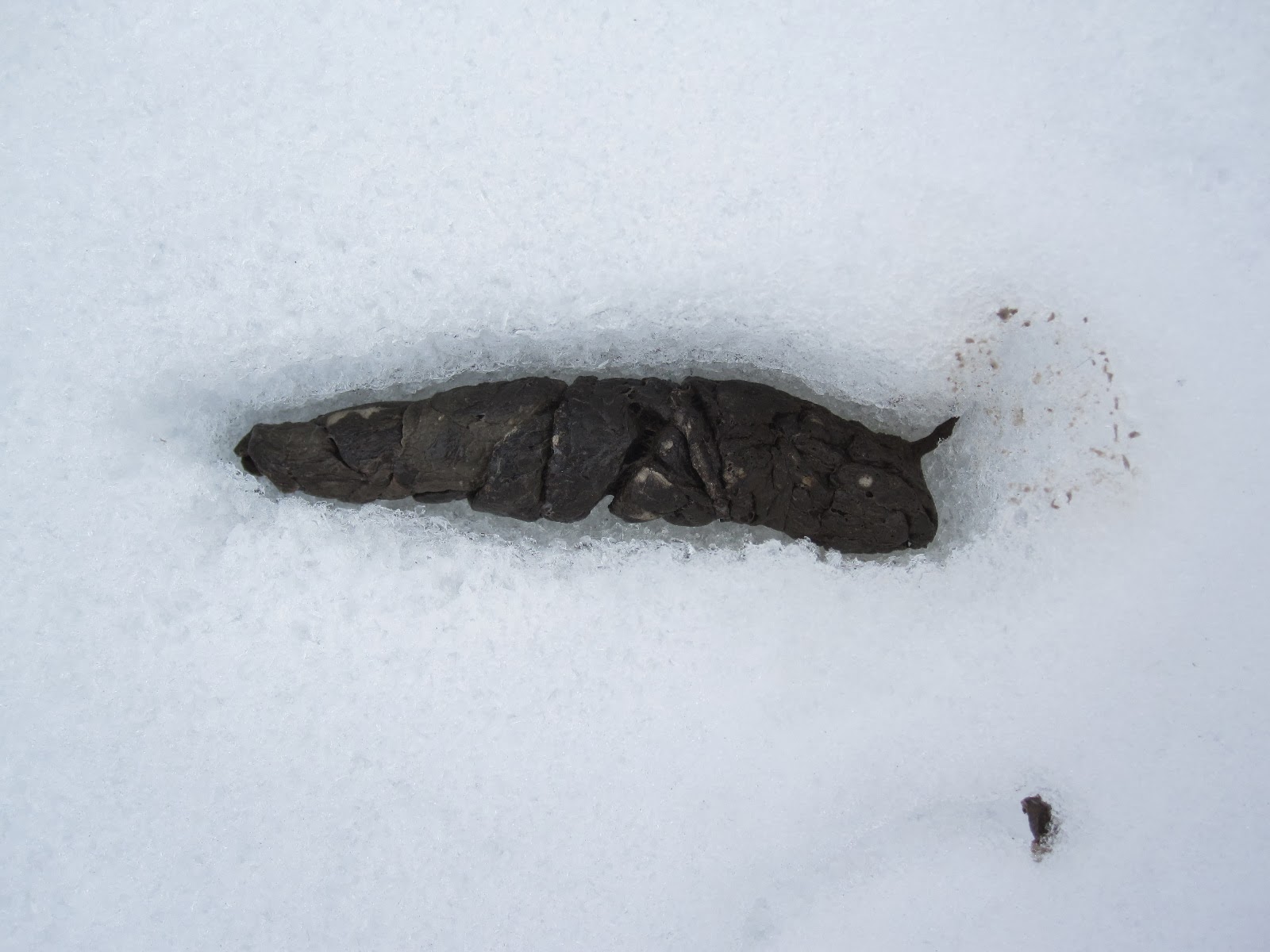 One must always be on the lookout for surprises on Lake Wicwas!


Another activity taking place in the Lakes Region this weekend was the Winter Wild at Ragged Mountain.  This series of events held at several ski areas in New Hampshire involves getting up to the top of the mountain using your choice of transportation:  running shoes, microspikes, Yatrax, snow shoes, telemark skis, cross-country skis, alpine skis or snowboards.  Then you have go back down again using the same method.  The only exception is snowboarders and downhill skiers who can hike up in their boots and ski/ride down.  Each class has their own category so they don't compete against each other, but it is really more of an event than a race.  Callum and I used Yaktrax for our first attempt at this event, and we both had a great time.  We'll do it again next year!  There are four more events this year if anyone's interested, at Pat's Peak, Sunapee, Black Mountain, and the finals at Bretton Woods.


There's never a dull moment in New Hampshire in the winter!
Posted by Scott Powell at 2:00 PM No comments: