I hope everyone had a good Thanksgiving with family and friends and lots of turkey.  I kept my eye out for un-cooked turkeys this week, but none were to be found, so here's a picture from November several years ago. 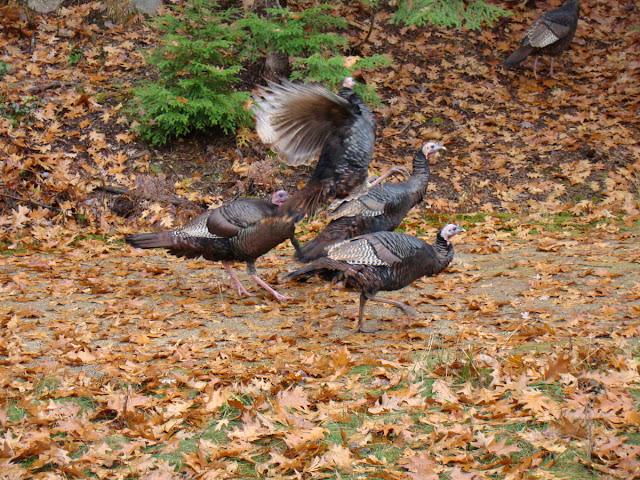 What was plentiful this week were mergansers, right after I noted last week that I hadn't seen but one pair of mergansers all fall.  Now there are hooded and common mergansers, travelling in groups as well as pairs.

On one crisp morning I saw a flock of juncos flitting about the small saplings looking for seeds.
It was my first greeting from these friendly birds this fall.  Many live in New Hampshire year-round as the Lakes Region is in their sweet-spot, but they don't seem to be visible much in the summer, perhaps because they are hidden by the foliage as they forage on the forest floor for seeds.  Many juncos spend their summers in Canada and come farther south for the winter;  it's not clear whether the birds we see in winter are year-round residents, or whether ours move south and are replaced by those from Canada moving here.  Regardless, all of them are more exposed with the leaves off the trees and soon they will be as common as chickadees under the feeders.

On those calm, cold mornings, ever-larger coves on the lakes are covered with a skim of ice, and some of them are keeping a little ice even as the day warms, though most of Lake Wicwas is still a bright November-blue.

November offers clear hiking weather, with nice sight lines absent all the leaves, and one of my friends (thanks CM!) inspired me to hike up Fogg Hill in Center Harbor.  This is always a nice walk (you can find a map for the 2-mile round trip walk here) with many signs of moose also using the trail (those wide antlers make it hard to fight through the forest) as shown by so many trees stripped of bark, sometimes up to 12 feet high - those are some big animals!

The beaver pond along the trail was completely frozen over.

I read in an article shared by NHLakes that beavers will break through thin ice-skims to prolong their activity a bit longer, but soon they will be restricted to living under a barricade of ice until spring liberates them once again.

How many more sunrises will we get with light reflecting off liquid water before the lakes are sealed off from all of us? 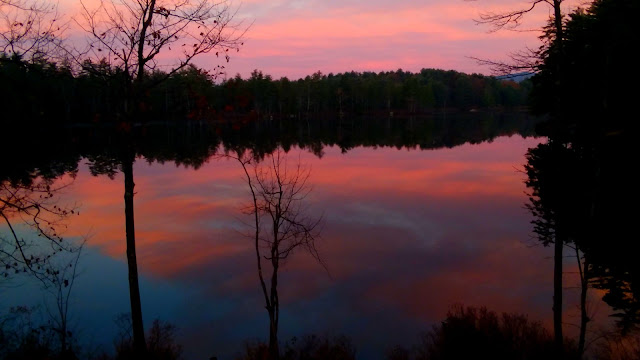 Posted by Scott Powell at 11:16 AM No comments:

Well, it's definitely November.  And at least some of the wild creatures have figured it out.  There have been many more mallards stopping by on their way south than most years. 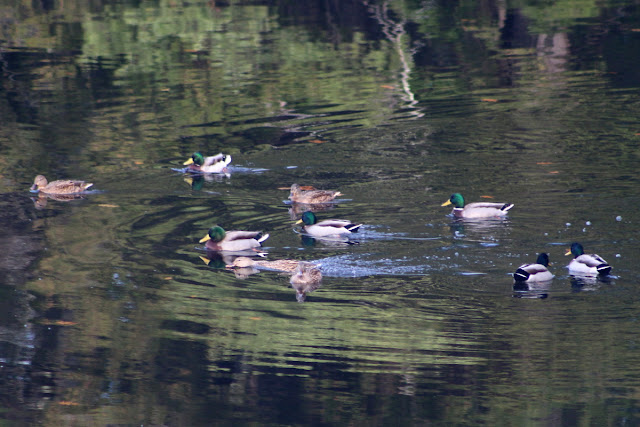 Mallards, like many ducks, pair up in the fall and will remain as a pair through the winter, and I have seen plenty of courting behavior.

It seems like Lake Wicwas is a good pick-up spot. 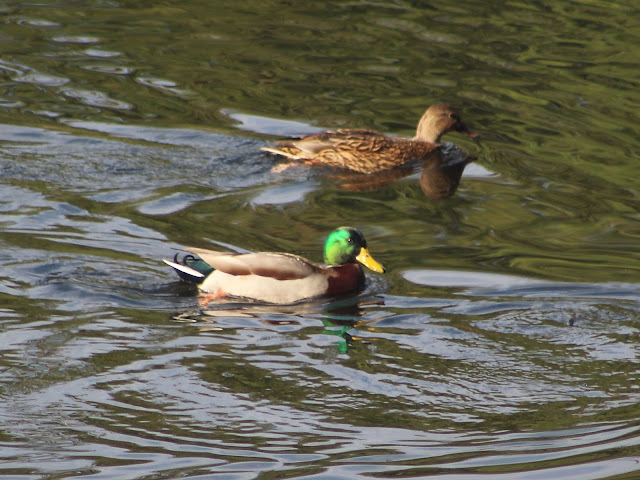 In contrast to the mallards (considered "dabblers"), I have seen almost no diving ducks.  I saw one hooded merganser back in late October, no more since then, and no common mergansers, golden-eyes, or ring-necked ducks, and I don't know why.  The geese are still hanging around, though I don't know if they are the summer residents or birds working their way south from points north. 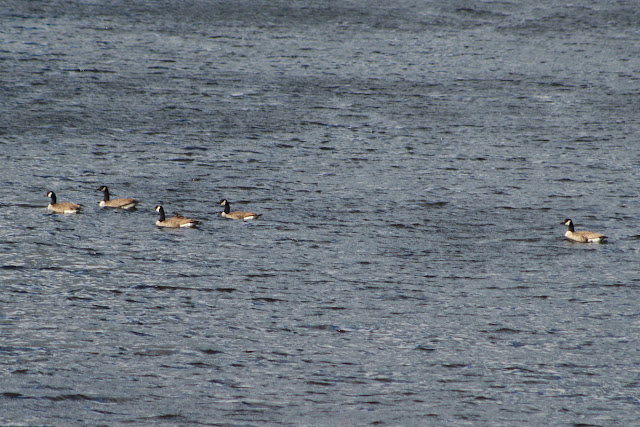 And there has been a possible sighting of loons on Lake Wicwas this week, which isn't unexpected.  Loons are still in the area, including the female nesting loon on Pleasant Lake, thanks to Kittie Wilson's observations.
I wonder if she will join her mate over the winter, or spend the season apart and reunite on the lake in spring.

We don't need to be concerned about loons being here until the lake is almost completely frozen over.

I was given clear notice by a flock of chickadees one afternoon that I was trespassing in their territory - lots of loud calling and complaining.
Chickadees have formed their winter flocks now, after spending the summer with their individual family groups.  In breeding season mating pairs separate from the flock and spend the summer in a smaller territory with their immediate family.  When winter approaches they gather again into larger flocks that together defend a larger territory, visiting their feeding locations on a daily basis. 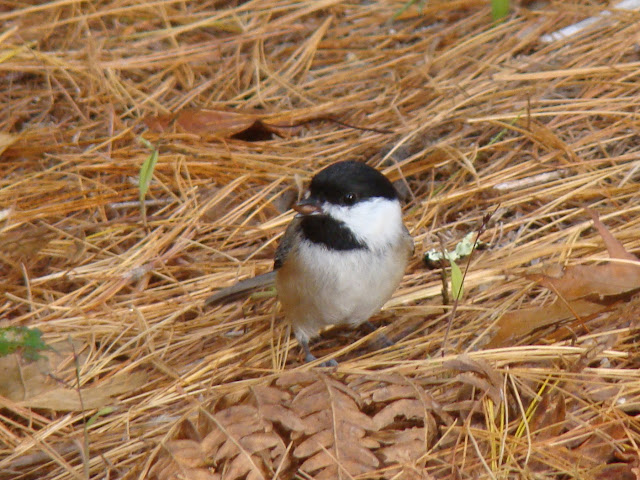 If they encounter another flock in their territory they will attempt to drive it away, yet they often allow other species to join their flock, which is why we see mixed flocks of chickadees, nuthatches, woodpeckers, and titmice at feeders.
It's thought that these birds follow along with the chickadees to take advantage of the chickadees knowledge of prime feeding sites.  [Ref:  "A Guide to Bird Behavior" Vol I, Donald W. Stokes, Little, Brown and Company]

It may just the start of a long winter for birds and humans, but there are reminders that all seasons are fleeting:  buds that will bloom next spring have already been formed, just waiting for their time in the sun.
But for now, it's November. 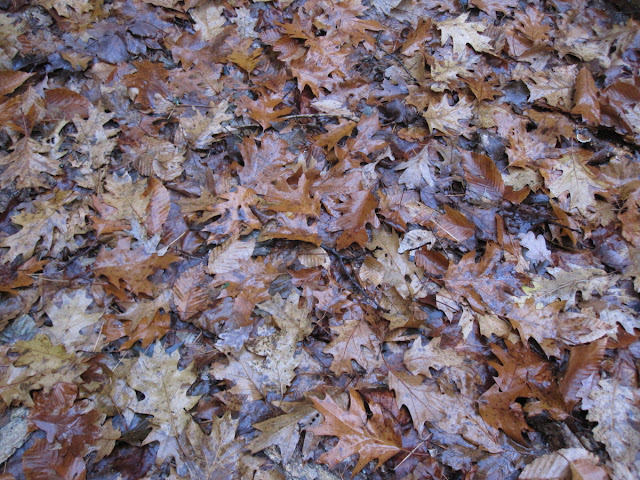 Correction:  Last week I said the first frost occurred on October 9th - that should have said November 9th.

Posted by Scott Powell at 6:27 PM No comments:

We finally had our first visit from Jack Frost this week.


The first hard freeze of the season occurred November 9th, when the temperature dropped to 24 degrees, covering everything with hoarfrost. 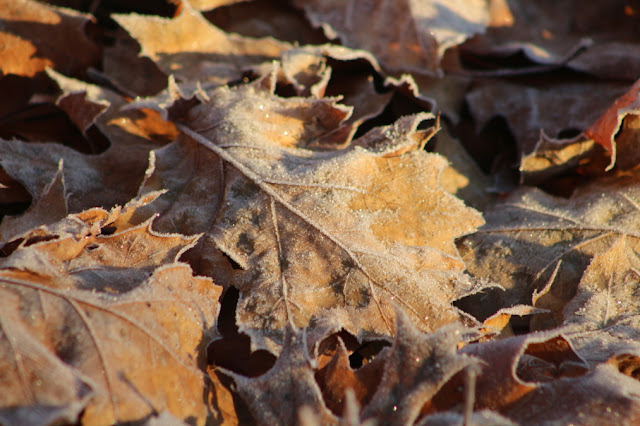 Hoarfrost ("hoar" coming from the old English word for "old", presumably because it makes its host look old and gray) forms when humid air comes in contact with an object whose temperature is below the freezing point, thus changing from a vapor to a solid without passing through the liquid phase.  It most often occurs in calm air and is common in the Lakes Region this time of year as warm lakes provide the needed moisture before they freeze over.
Water vapor molecules first nucleate directly on an object and then grow, sometimes into long crystalline formations.
It was late for the first frost, so I looked up the average first-frost date - data for Plymouth was the closest I could find - and the average date there is October 1st.  (This means 50% of the time a frost occurs before that date.  Scientists track multiple frost definitions, the one I'm quoting is for a temperature of 28 degrees; the 32 degree definition occurs about two weeks earlier.)  Meredith is south of Plymouth and moderated by lakes, but even down in Concord the average date is October 3rd, so any way we look at it, we were well over a month later than average.

When Jack did finally arrive, he made his presence known, bringing with him strong squalls on Friday with a touch of snow. 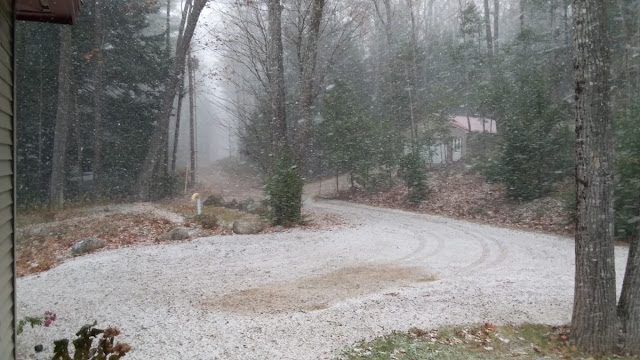 He even caught the birds by surprise as they paddled around the lake trying to find a protected spot in which to hide.

With temperatures well below freezing (it was 18 degrees on Saturday morning) and the strong wind churning up the lakes, I expect water temperatures in New Hampshire lakes have dropped dramatically.

Jack even painted the first skim of ice on the lake in protected coves and marshes. 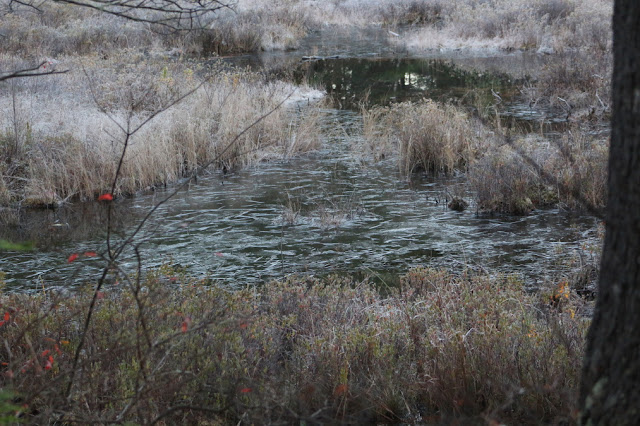 After a long hiatus, I did see one deer this week - just a glimpse, no photo....  I also saw signs of a buck in the neighborhood: bark worn off an aspen tree where the deer rubbed its antlers on the trunk.
Bucks do this to mark their territory, their antlers placing a scent on the tree, telling both male and female deer that he owns this area.  Its presence here shows the value of clearings like this to wildlife in an area where much of the terrain is mature forest.  You can easily find this rub if you want to see it:  it is right beside the yellow trail in the clearing where the trail splits in two to head up to Crockett's Ledge.  You can see the trail sign at the fork in this picture for reference.

Maybe the hunters will have some snow for tracking this year;  it seems like Jack may have decided to stick around now for the season. 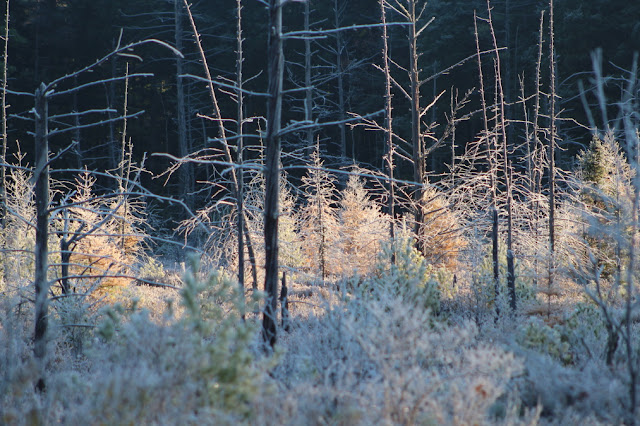 Answer to the location of the Meredith Rose from two weeks ago:  It is located on Main Street beside the Meredith Historical Society, across Highland Street from Town Hall. 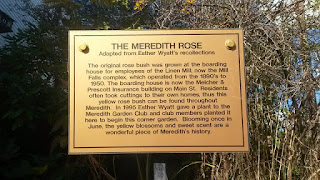 It was quiet around the lake this week, in more ways than one.  November arrived right on schedule by exchanging the warm weather of the past few weeks with a strong nor'easter that left much of the area without power - a 68 mph wind gust was recorded in Meredith.  It was eerily quiet for much of Monday until you went by a house with a generator running.  About 60% of Meredith lost power, many for 24 hours; Moultonborough and Gilford were especially hard hit with upwards of 90% in the dark, some for over five days.  And yes, it looked like November. 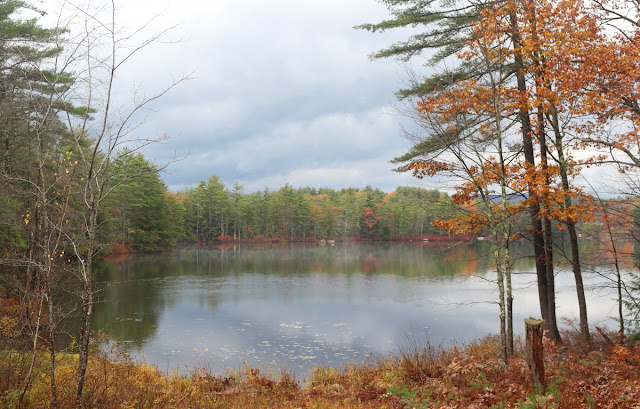 I wish I had paid more attention to this plant in the summer so I would know for sure what it is, but I think it's Tall Meadow Rue.  It looks like a good choice for fall and winter decorating.

Fog, mist and rain was the theme of the week, though there is always beauty to be seen at every juncture in life. 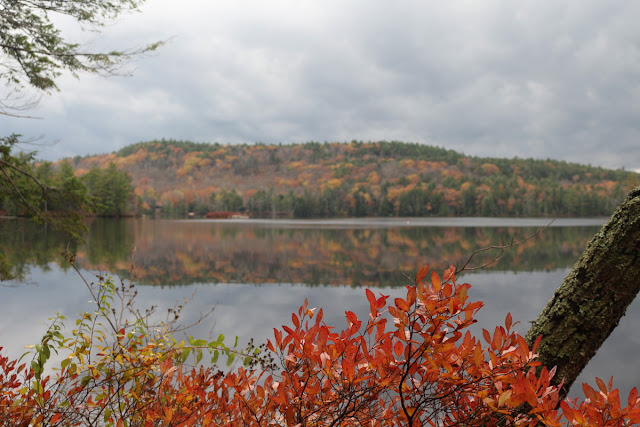 And there is still some color in the world, shining even brighter against the drab of early November.


It was also a quiet week for nature.  I saw only a few mallards and Canada geese on the lake, though I did have a pileated woodpecker fly in front of me one foggy day.  It wasn't as startling as last week's owl, but just as beautiful to see.


And I haven't seen a deer in weeks; maybe they know archery and muzzleloader hunting is underway, with rifle season starting on Tuesday (remember to wear your orange in the woods).

I see many old, shriveled up mushrooms on the forest floor now, which I often mistake for animal scat at first, so I was surprised to see one last fresh mushroom making a last stab at life. 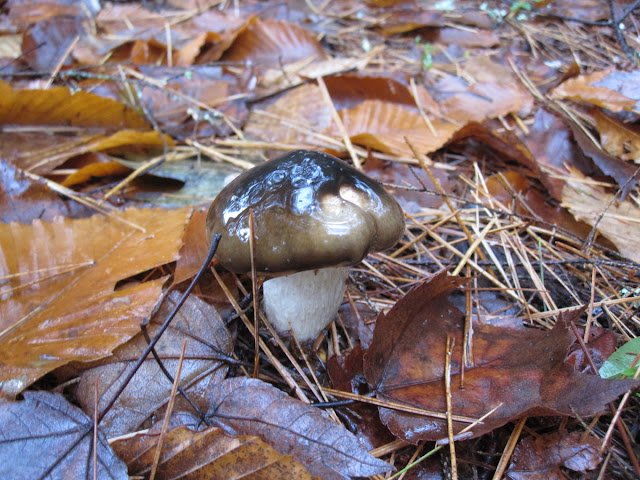 I can appreciate the subtle beauty of the season now, in early November; we'll see how I feel about it in the middle December if we haven't gotten any snow to brighten things up by then.

Posted by Scott Powell at 7:40 AM No comments: