Tremendous changes transpired this past week around Lake Wicwas.  The warm weather early in the week melted most of the ice that had formed during the prior cold snap, but then an early winter storm hit and changed the landscape completely.  Many people woke up Thanksgiving day to a beautiful blanket of snow covering everything - and no electricity to cook their turkey.

It was a wet snow that stuck to trees and power lines, causing over 200,000 customers in New Hampshire to lose power.  Some were out until Sunday.

There was enough snow to allow snowshowing and skiing, but it was slow going due to the trees knocked down and blocking the trails. 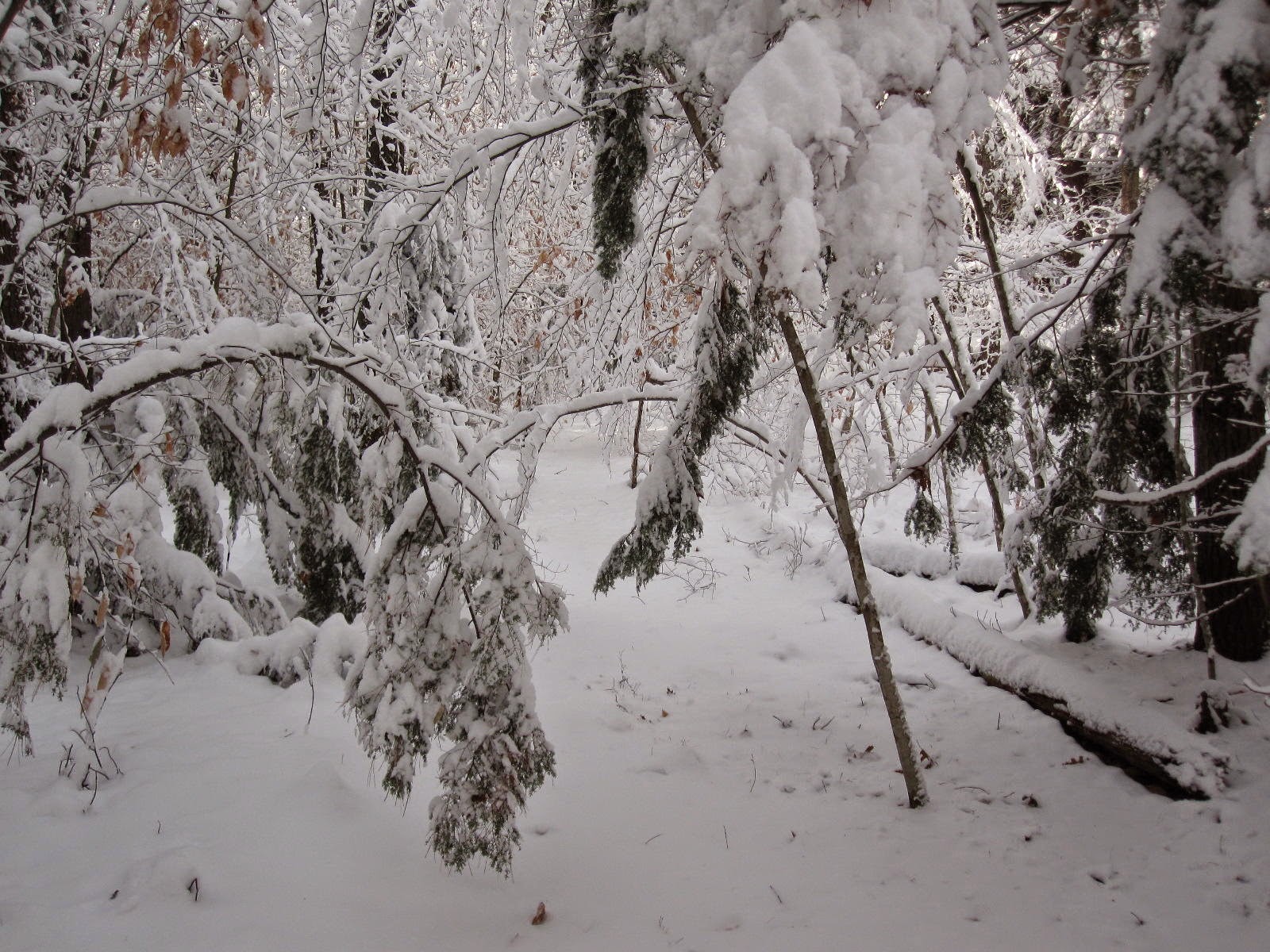 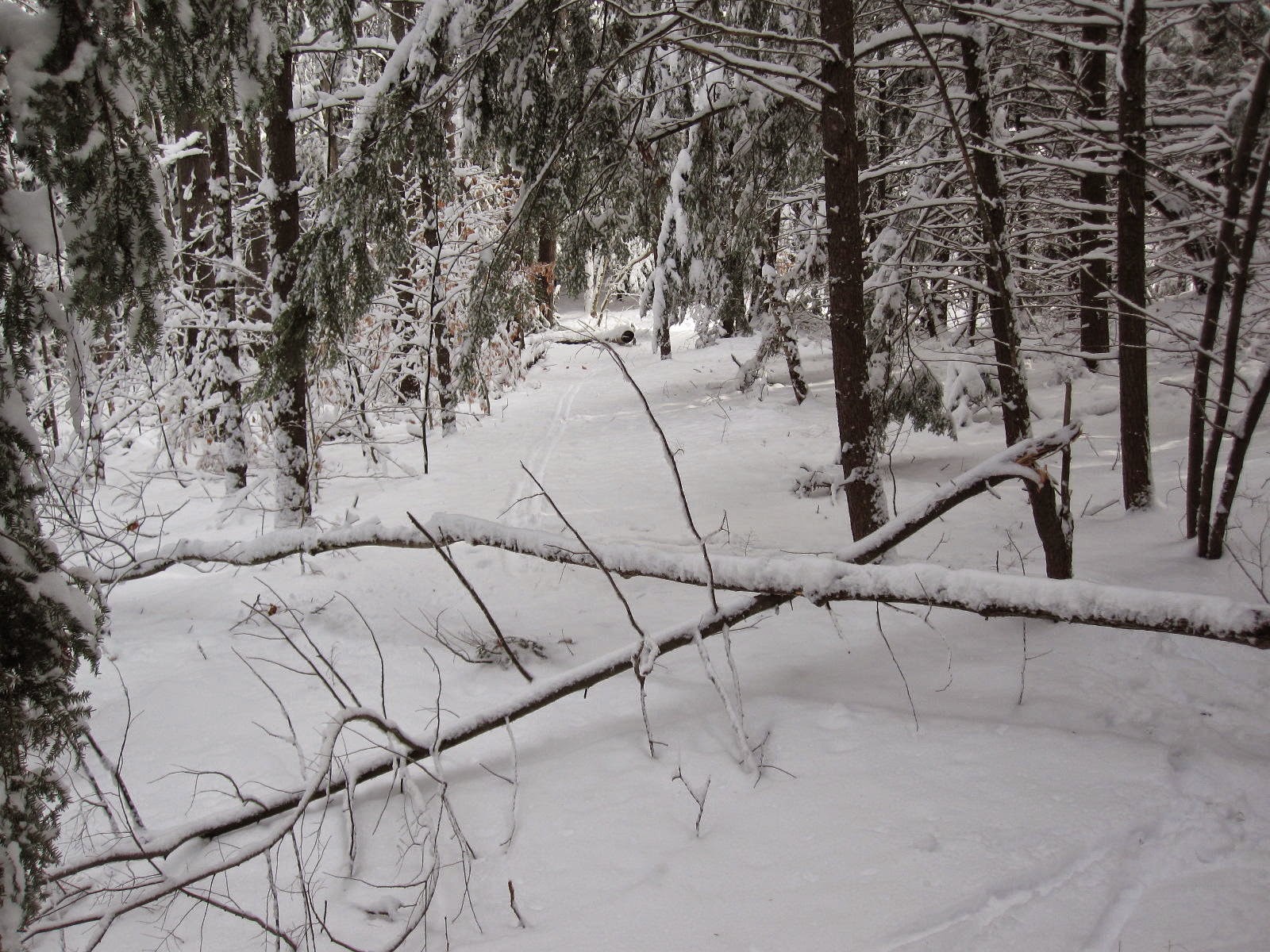 But it sure is beautiful when the sky turns blue and the sun comes out after a New England snow storm. 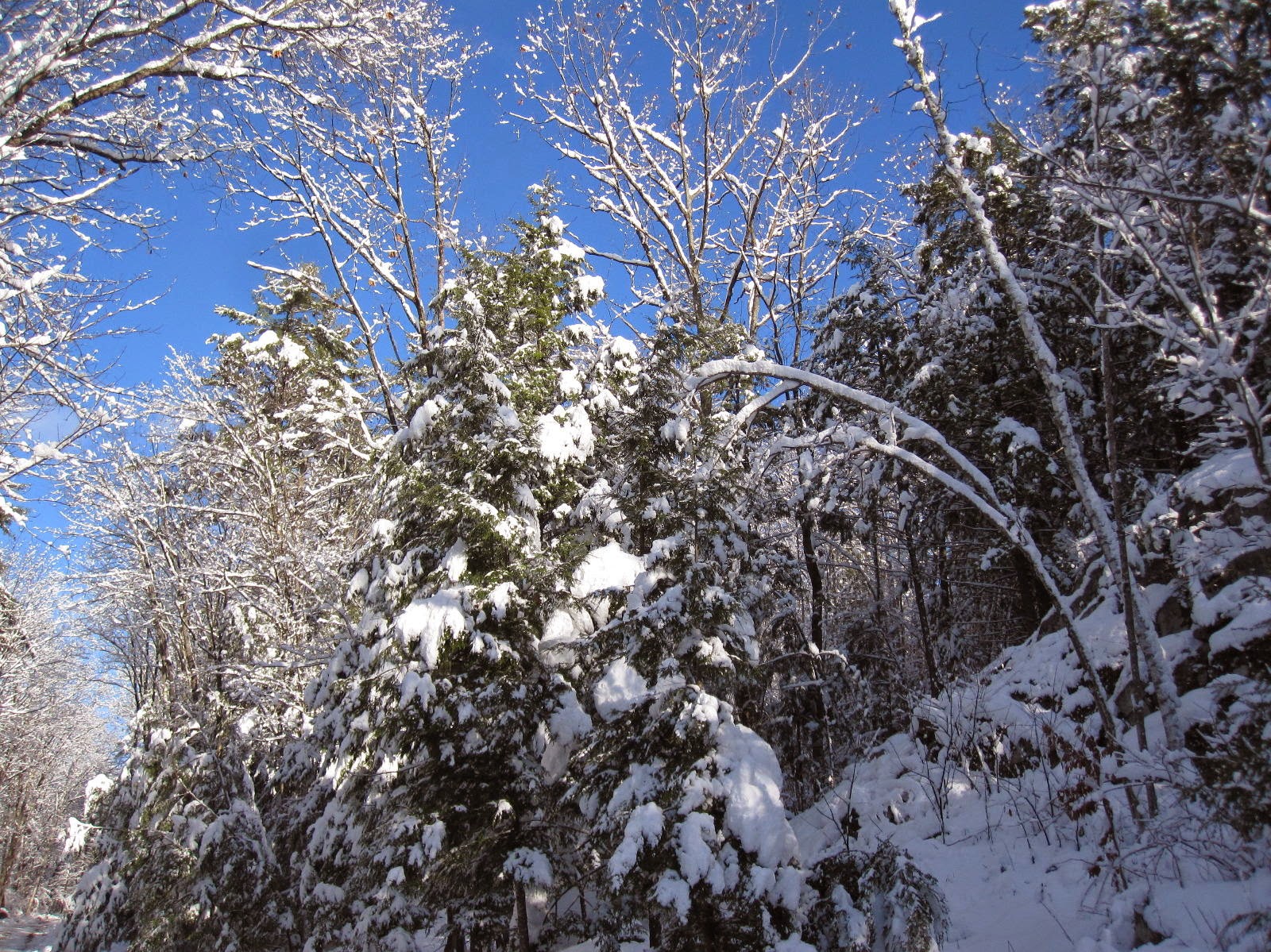 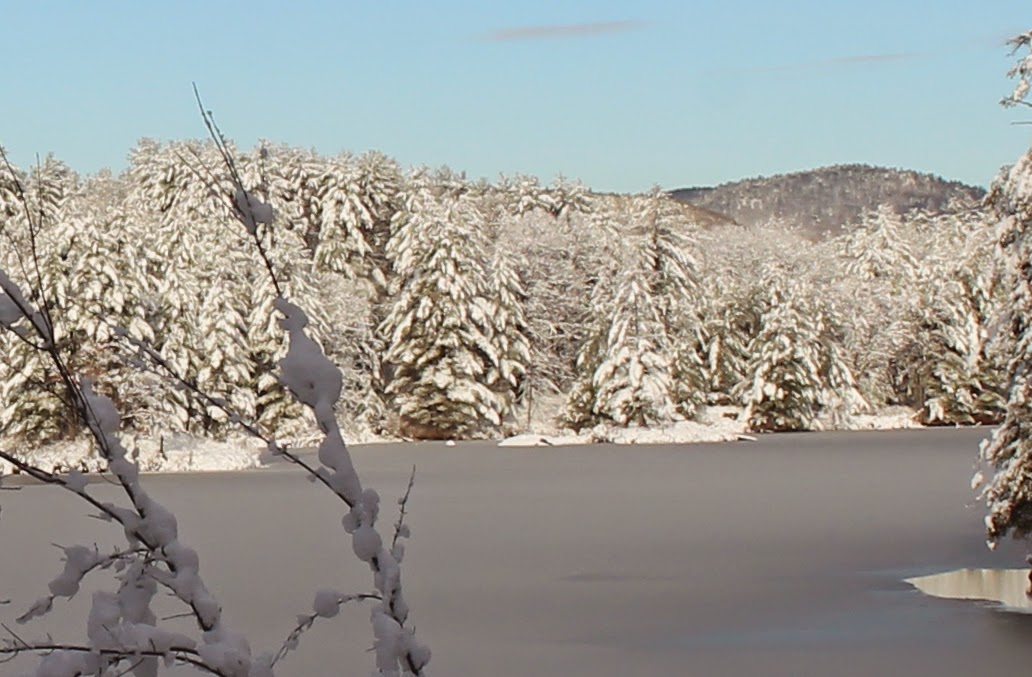 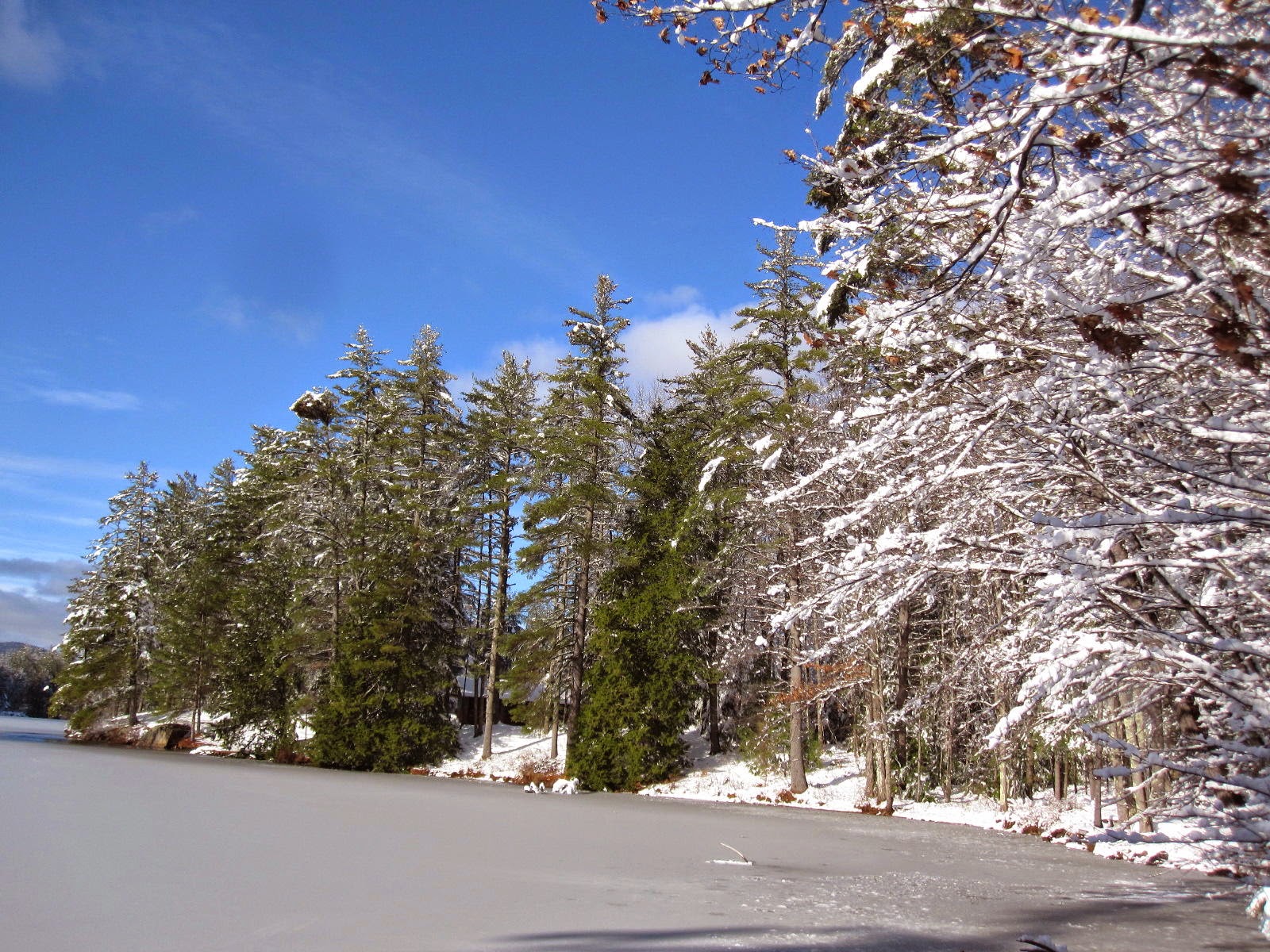 It warmed up today, helping our efforts to clear out the snow;  some thought is was down-right balmy. 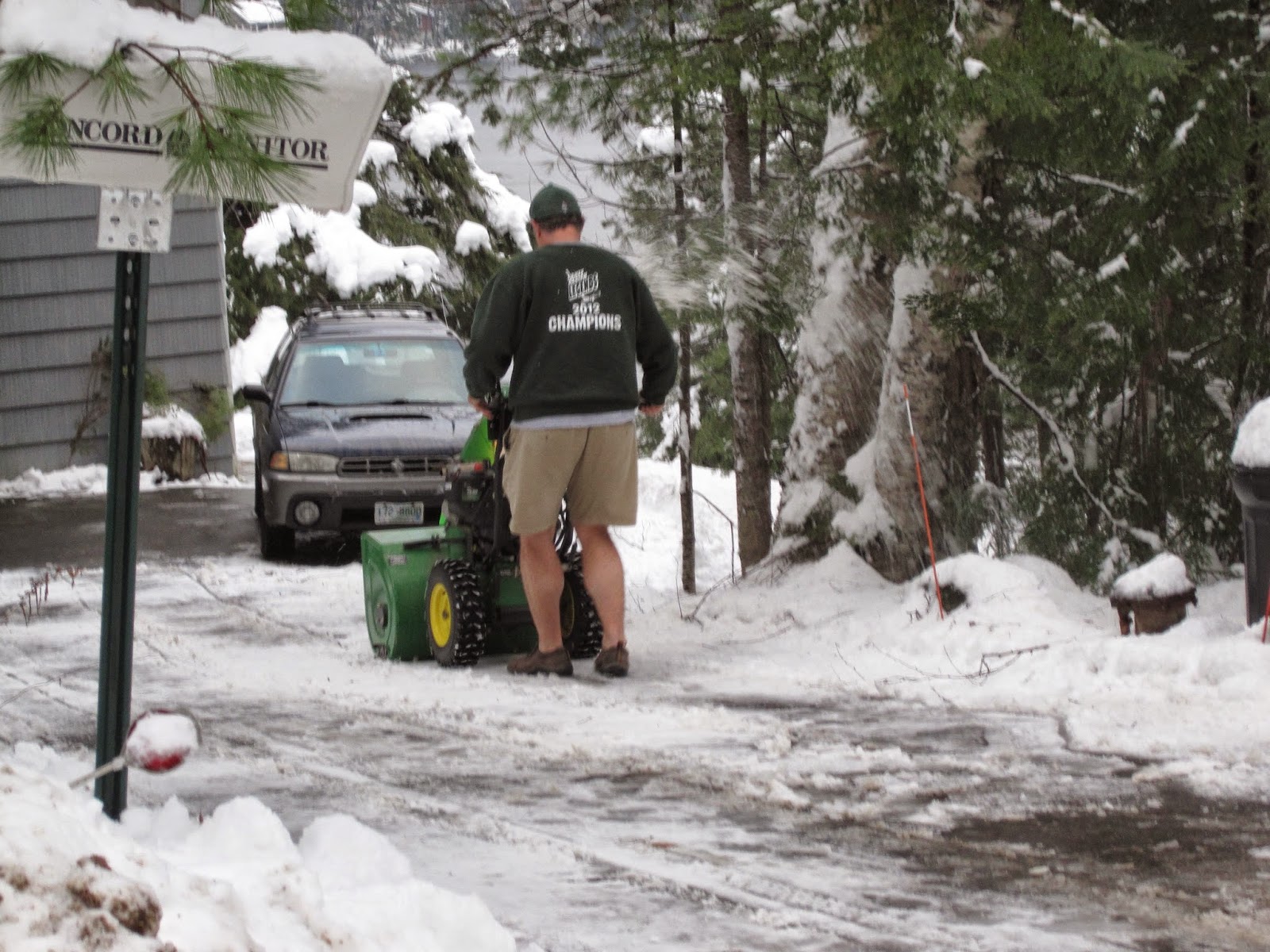 You have to love New Englander's attitudes towards winter!

The snow filled in much of Lake Wicwas with an inch or two of slush, though the widest part of the lake remained clear.  Whether or not this layer freezes will depend on the weather over the next week.  If this does freeze it will require patience and care before traveling out on the ice, as these conditions make for weak and widely variable ice.  It's not like the solid black ice that forms when the entire lake is cold and freezes at once. 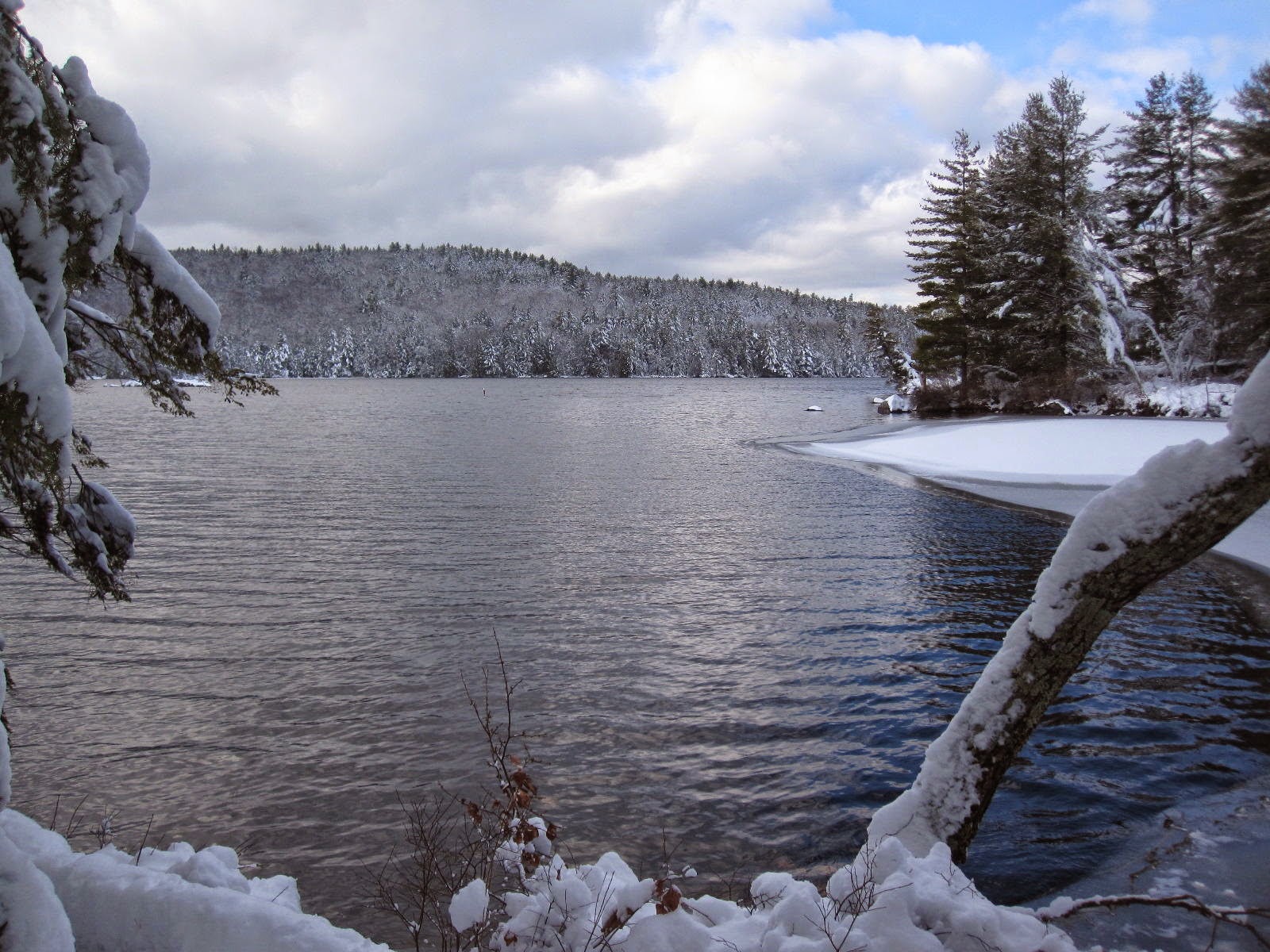 The last week of November transformed Lake Wicwas rapidly from fall to winter, but it is too early to know whether this will last.  New England weather is far too fickle to predict winter is here for good. 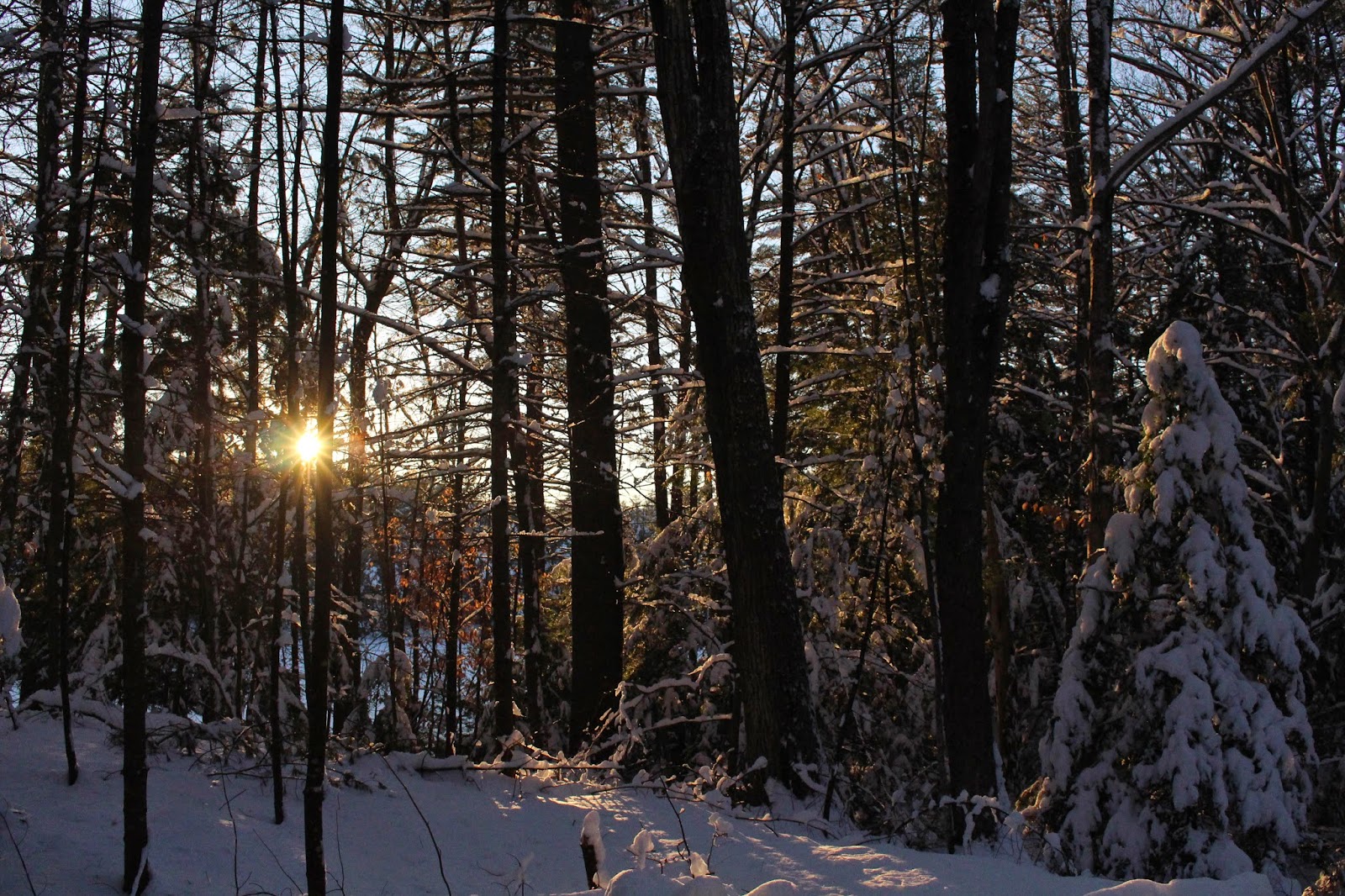 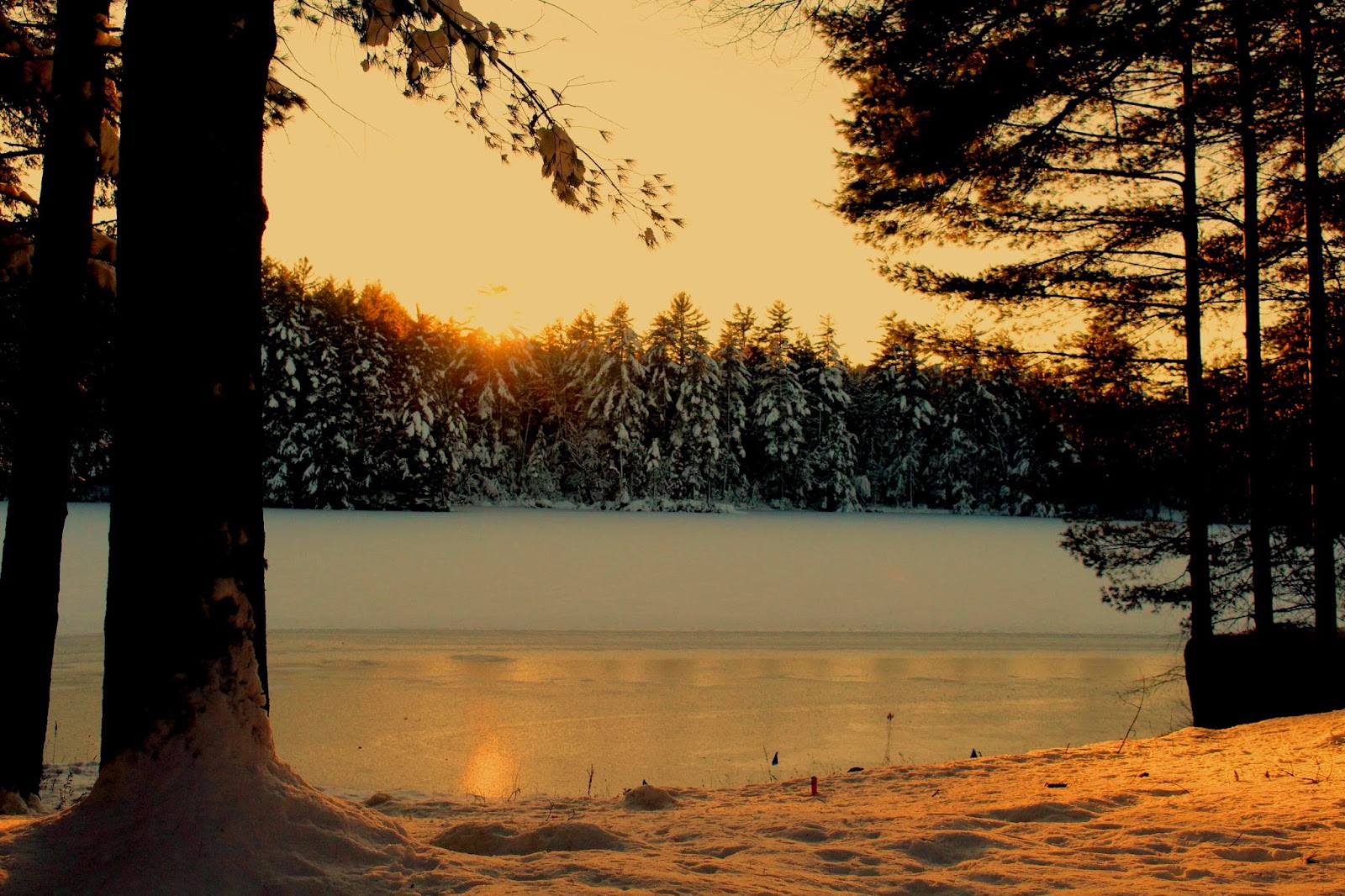 Posted by Scott Powell at 9:07 PM No comments:

I missed being able to track the changes around Lake Wicwas the past few weeks, as we were away on a trip to the south.  We managed to stay just ahead of the first polar plunge for the year, but traveled back through it.  It was in the twenties way down in South Carolina!

I am always surprised by how similar the southern Appalachian mountains are to our own white mountains.

The foliage there is several weeks behind ours, with some nice color still to be found at the right elevations. 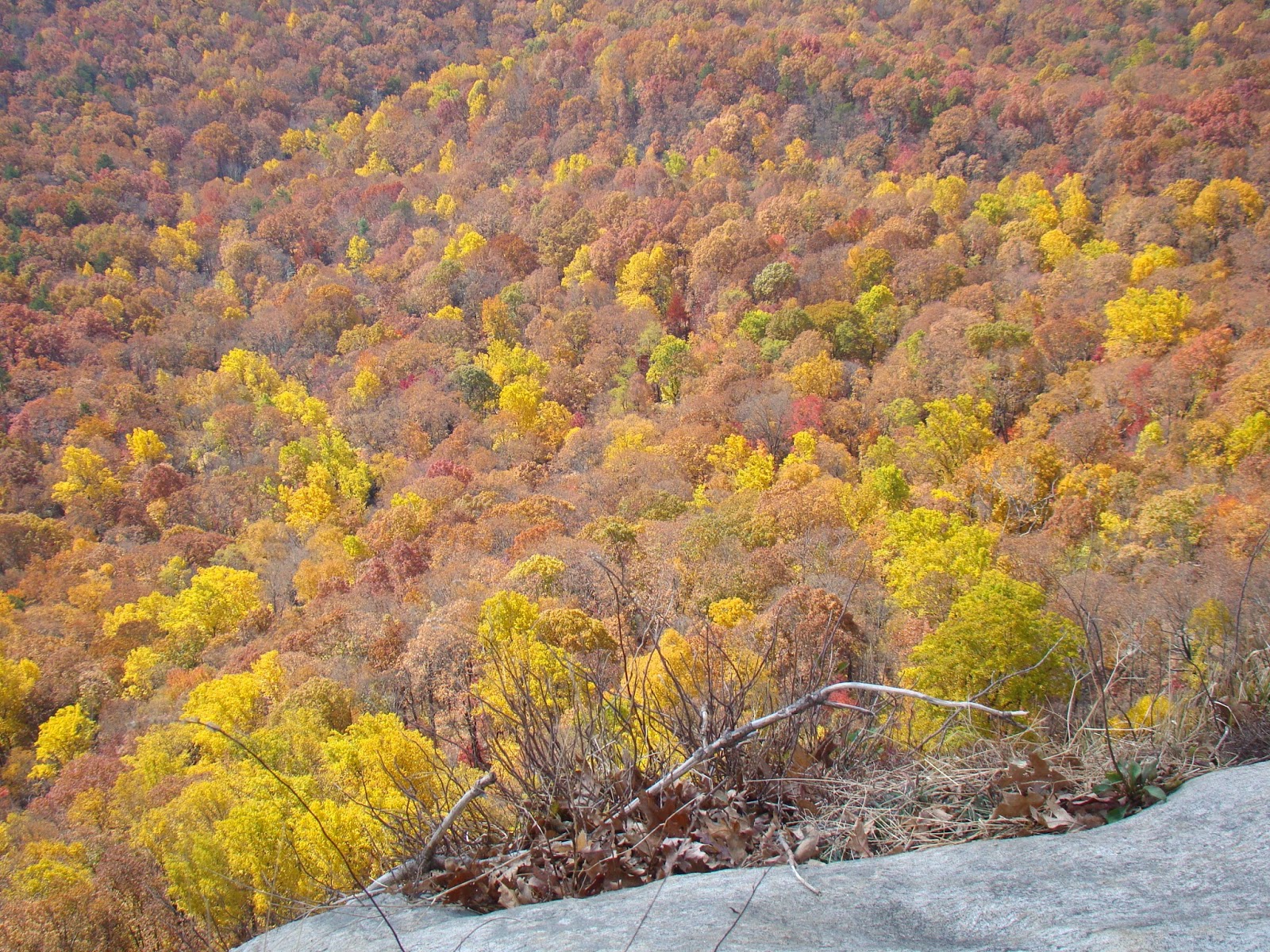 Farther south in Florida I observed very different water fowl than we have in New Hampshire, with some interesting methods of catching their food.  My favorite were the pelicans, which soar low over the ocean, flying up when they see lunch, and then just letting themselves crash-land into the water to load up their bills with small fish.  The seagulls follow closely behind, hoping to pick up any stray leftovers.


Back in central New Hampshire, I was surprised to see a layer of ice already on parts of the lake. 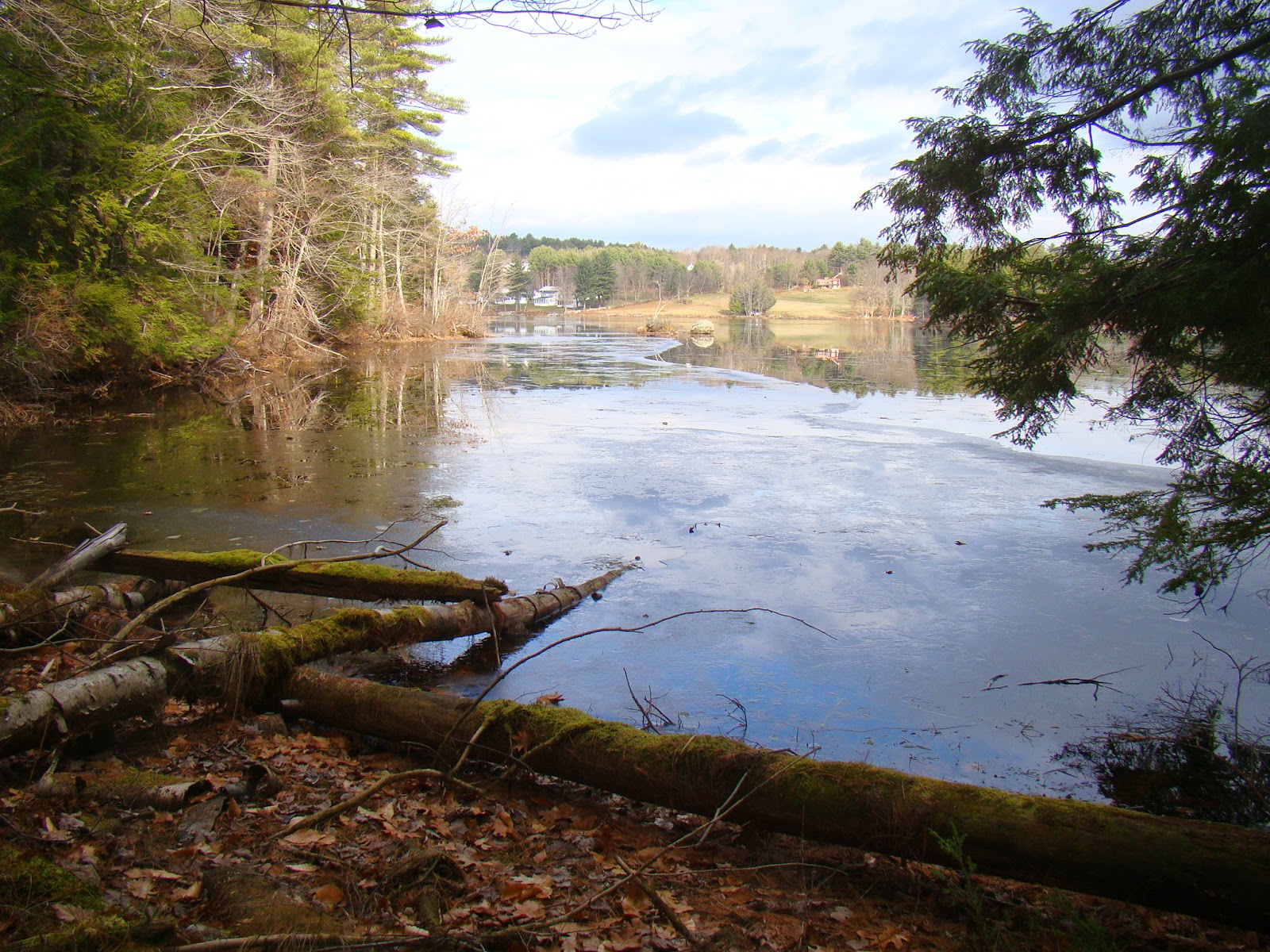 There were also a few remnants of snow from a storm while I was away. 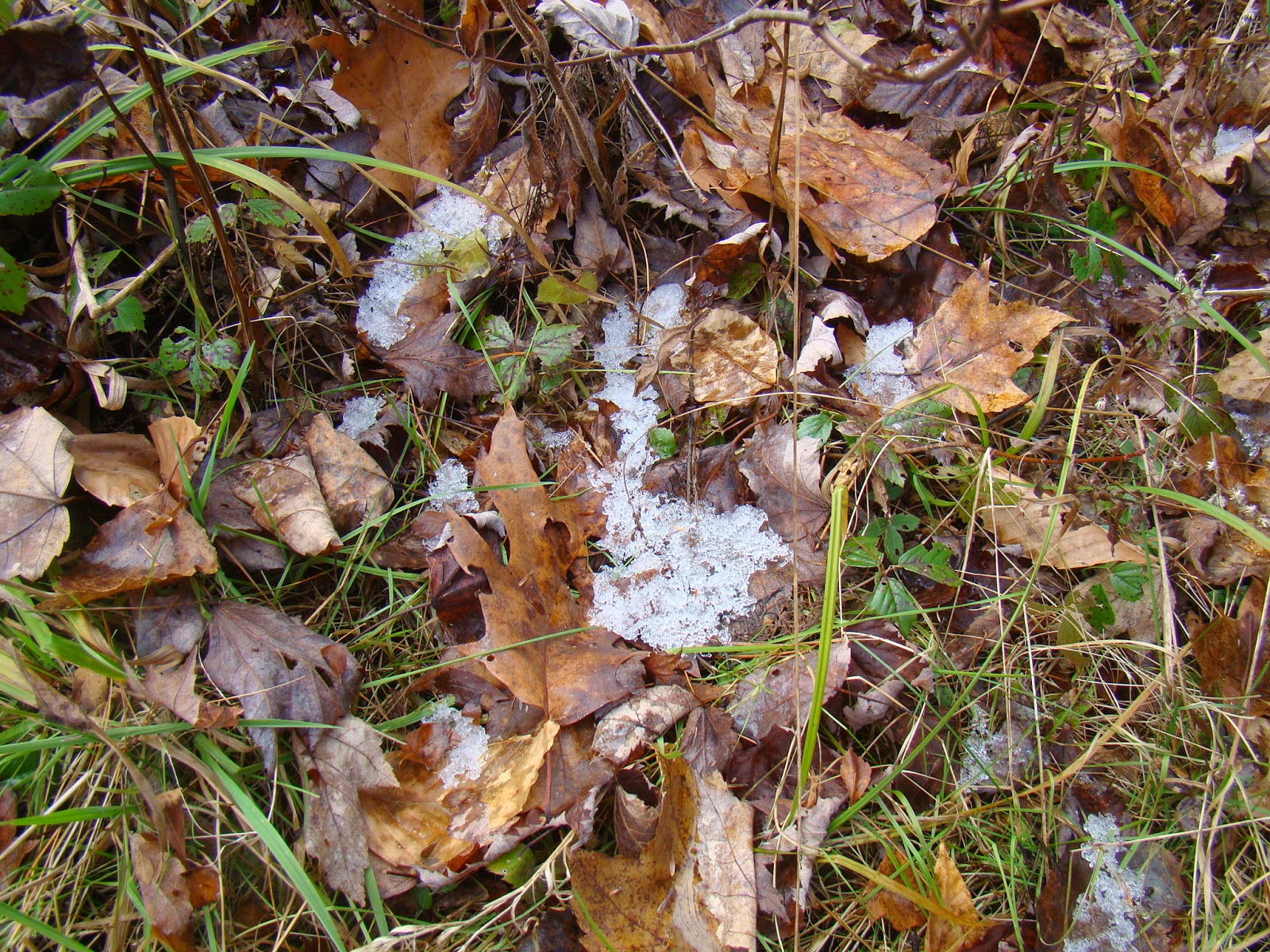 As it was warm today, the ice is mostly gone, and with more warm weather and rain coming, it will likely all be gone soon.  I'll then get to watch it form again.

I probably missed most of the migratory birds, but I did see a large flock of what looks like mergansers on the lake. 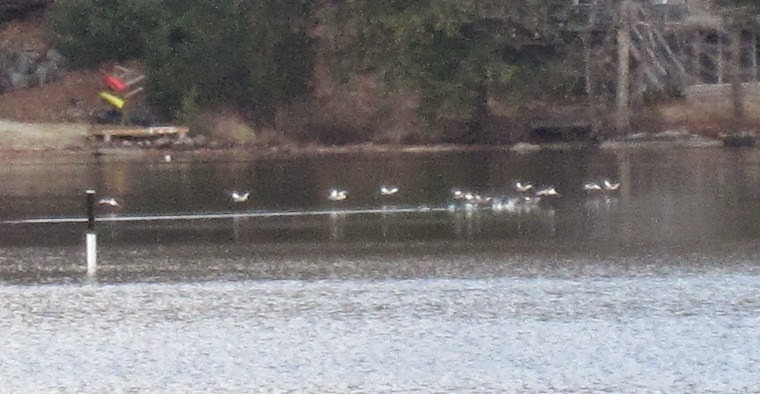 They were far away, so it was hard to tell.  Also far away was a lone, grayish-brown diving bird.  It looked like our loon chick, but again, I will have to watch over the next few days to be sure.

Hunting season for deer is in full swing now - for humans with firearms, that is.

Deer are always in season for other predators.  One evening a deer walked carefully along a frequently traveled game trail, followed just a few hours later by a coyote, close on its trail. 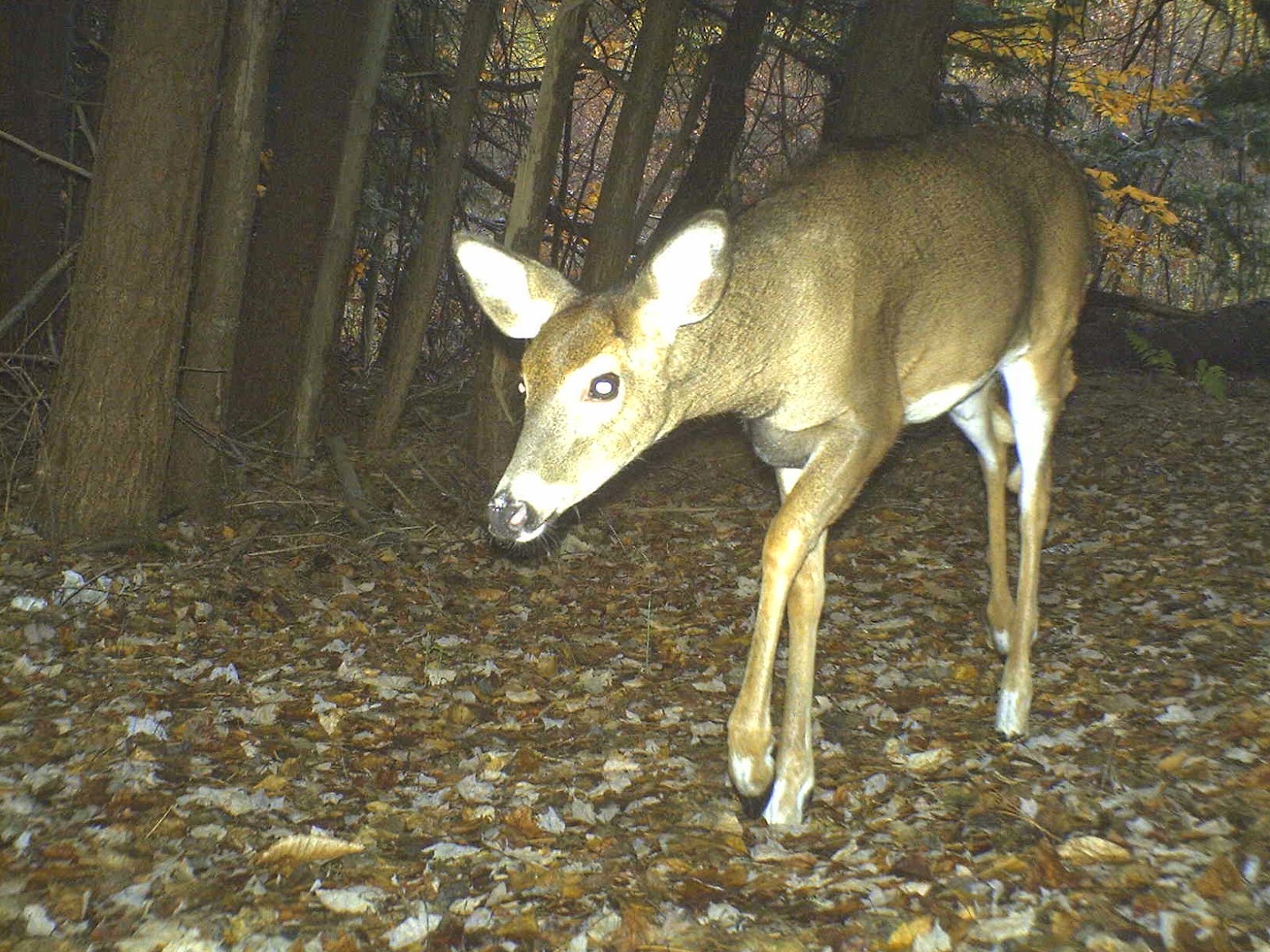 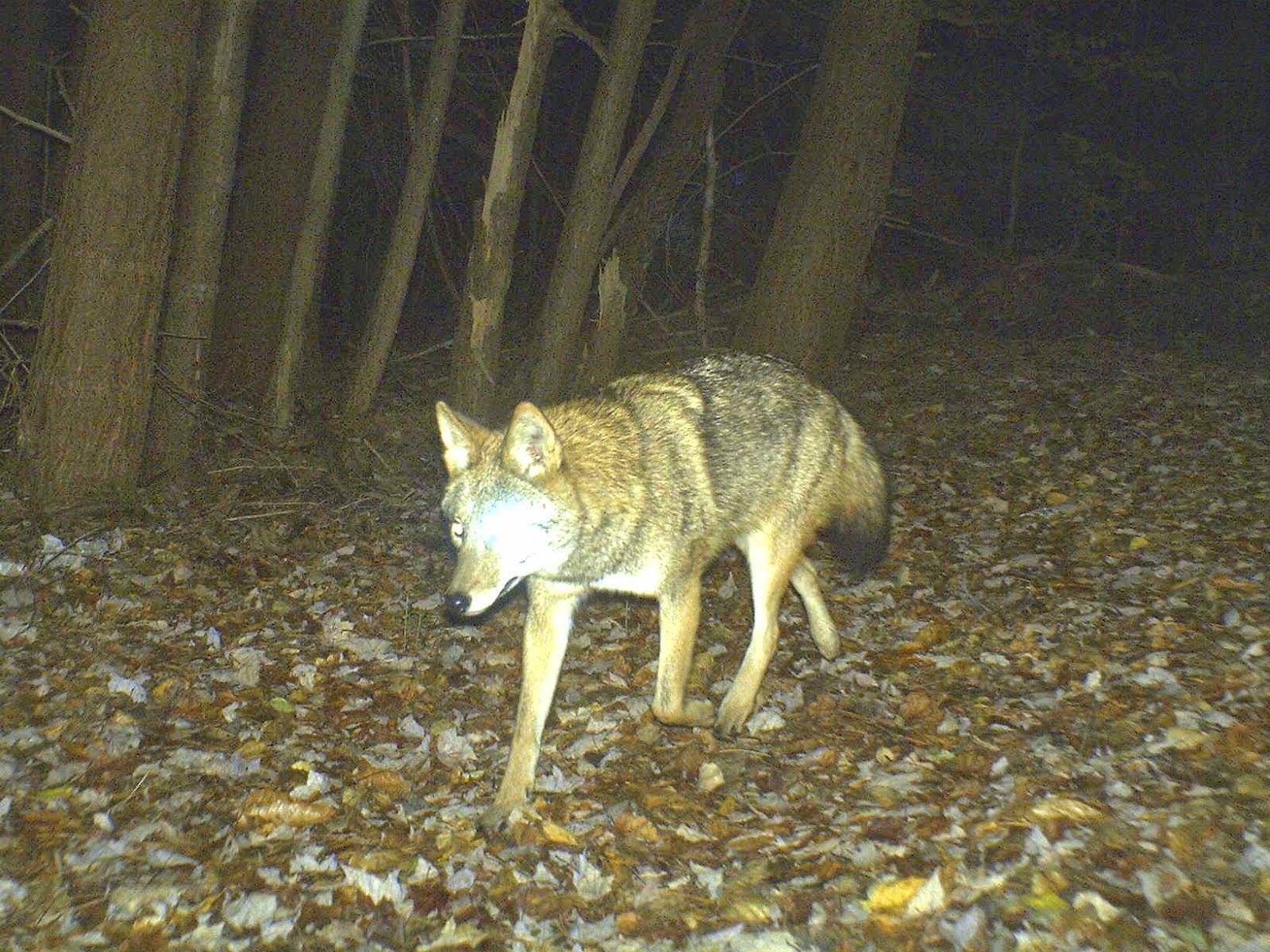 There is never a safe moment for a deer.  I couldn't count how many deer we saw killed along the highways between New Hampshire and Georgia.

Although is rather gray and drab around Lake Wicwas in late November, there are still some beautiful sights to be seen at the right moment. 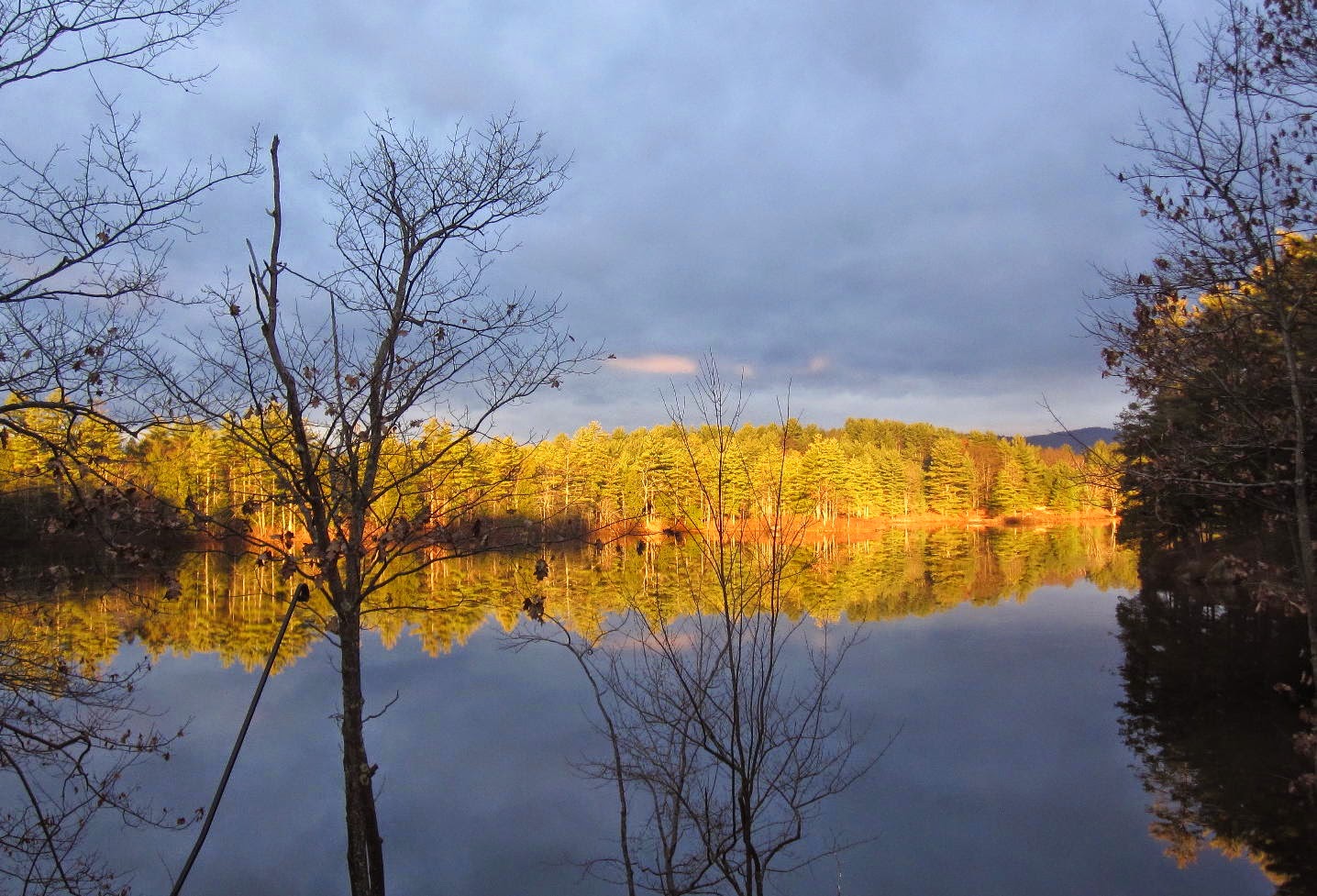 The beauty of winter isn't far off now.
Posted by Scott Powell at 10:06 PM No comments:

It has been a week for the birds, including the weather.  October is the wettest month of the year in New Hampshire, and this year it sure followed the trend.  I did manage to get out for a kayak on one nice day;  this time of year I treat every trip on the lake like it might be my last for the year (at least on liquid water).

I saw quite a few ducks stopping for a rest on their migration trip, including four ducks that kept flying off ahead of my path around the lake. 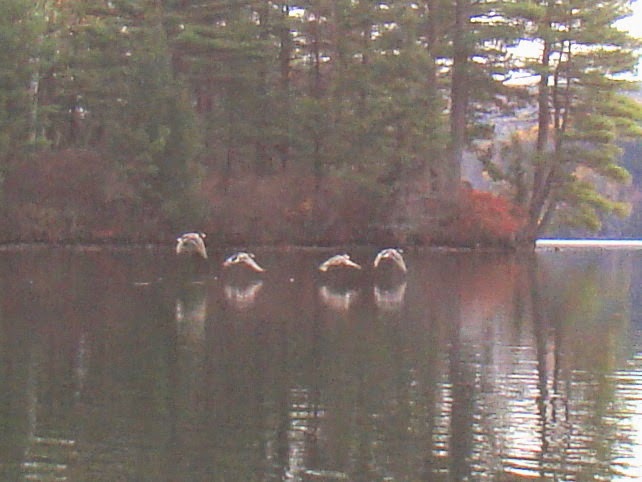 Other birds on the lake this week included various ducks, including three pairs of Ring-neck Ducks on one rainy day, and a Pileated Woodpecker flitting from tree to tree along the shore.  The Canada Geese are still here as well - the first to arrive, and one of the last leave.
If they knew hunting season for Canada Geese in our region lasted until December 23rd, they might leave sooner!

There are a few random splotches of color around, mostly from the huckleberries on the shoreline and an occasional maple.
The water level was very low, making the trip interesting, as terrain usually submerged was revealed above the water line.  Evidence of a lake changing slowly over time became evident;  rocks that used to part of the shore have been deposited into the lake as erosion washed away the soil that held them in place.  Over the decades the lake has become a bit larger in area, though shallower as a result.

I could also see the thousands of cavities that are used by a myriad of animals for homes and hiding places. 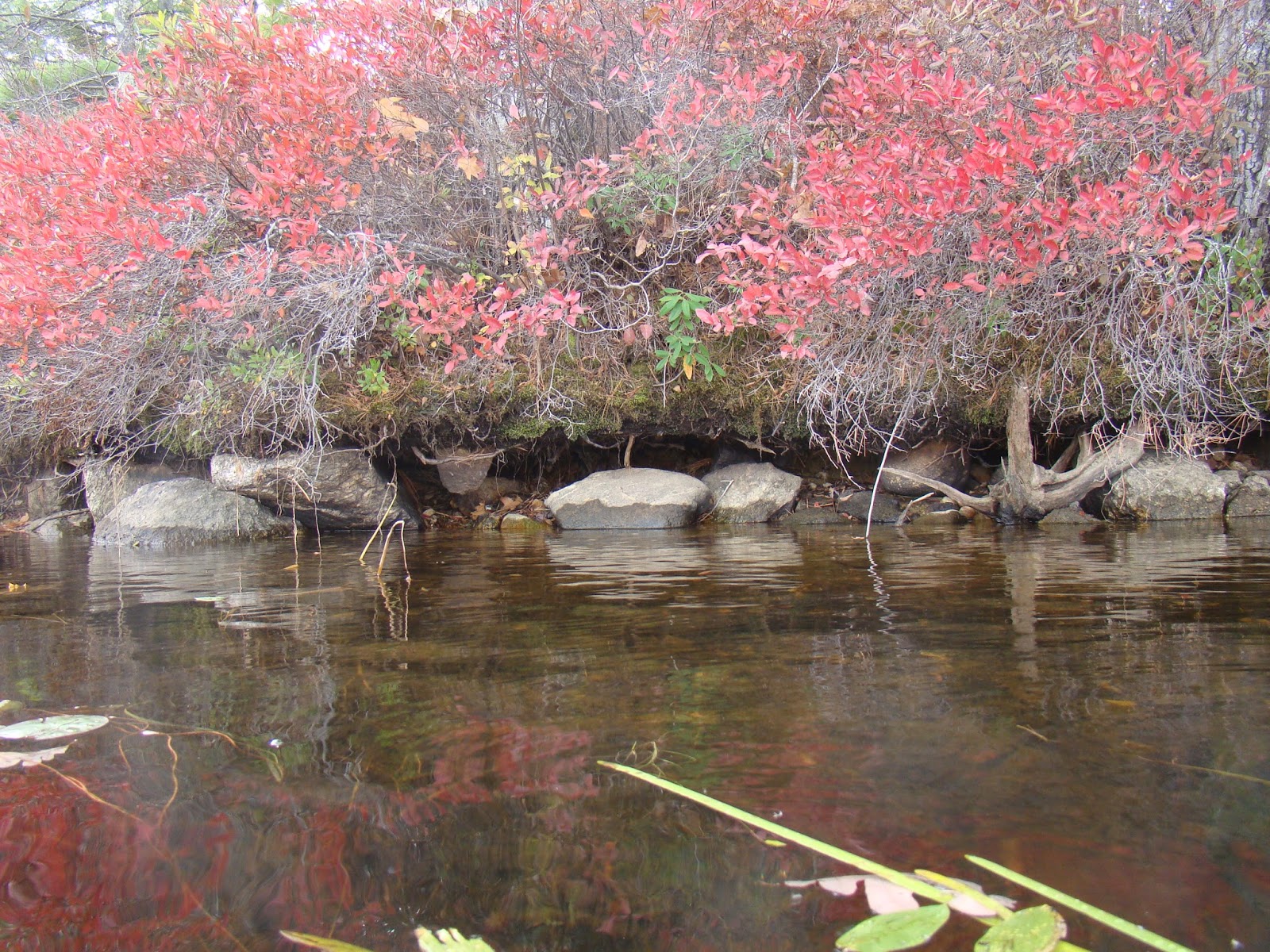 All those little holes between rocks and tree roots, hidden under the water, provide coverage for mink, muskrat, snakes, and other aquatic animals.

The bird feeder went out this week, hoping that the bears have gone off to find their winter resting sites.  Within an hour the desired visitors had found it, starting with chick-a-dees and both Hairy and Downy Woodpeckers.  Soon thereafter a large flock of Tufted Titmice came by, and they were not being very charitable;  there was lots of aerial dogfighting going on, and chasing each other away from their new-found food supply.

All the creatures are preparing for the coming winter, whether by securing food sources, finding a spot to hibernate, or heading to warmer climates (including many homo sapiens!).  Signs of the impending change is evident almost everywhere I look, including the evening sky, which is displaying the hues of the coming season.

Posted by Scott Powell at 4:33 PM No comments: