After a very dry stretch New Hampshire received some much needed rain this week - about five inches here in Meredith.  Lake Wicwas immediately rose six inches, and would have been higher if the town hadn't been managing the dam so well.  They had drawn the lake level down a couple of inches before the rain, and they had also pulled out another massive collection of debris stuffed in the dam by the beavers.

There were four town employees working to clear the mess out to make sure the lake could drain when the rain fell.

The streams filled right up and water in the canal from Lake Waukewan to Winnipesaukee was charging down the falls on Friday.

When I was downtown I noticed this sign and rosebush for the first time.
Do any of you who spend time in Meredith know where this is?  I'll reveal the location in a future post if no one identifies it.

The first of the large, diving migratory ducks arrived just yesterday, a Hooded Merganser, emerging out of the fog on the second-coldest morning this season.
There should be many more visiting the lakes right through November.

Prior to this week's rain re-filling the rivers there had been lots of action in the birdbath due to all the puddles and small streams running dry.


I also found one deposit of fisher scat on a trail, identifiable by the size, the hair in it, and its twisted shape.

There is still a nice display of foliage to be seen in the Lakes Region, a few late maples, but mostly oaks now.  I took a run on the Magenta Trail up to Arbutus Hill in the Hamlin-Eames-Symth Conservation Area and was pleased to find nice views of the White Mountains with plenty of color in the foreground.

If you haven't been up there it is definitely worth the four mile round-trip hike, especially this time of year.  On the way home I took this picture of Lake Wicwas right off of Chemung Rd.

It's great to know that most of the shoreline seen from here will remain in this pristine state due to the great generosity of local land owners, which is especially important in times of high water when wetlands like this provide important water storage.  A few weeks ago there were people out picking wild cranberries in this marsh.

These ancient plants will be here for a long time thanks to people's conservation of the land and water.

Can you believe it's almost November and we still haven't had a hard frost?


Finally, be warned that the southern-most bridge on the Blue Loop in the Hamlin Conservation Area is out of service, as one of the main support beams has broken.

The Conservation Commission will repair or replace it as soon as possible, but after five inches of rain, and a nor'easter on the way, be prepared for a rock-hop to cross the stream if you use that trail.
Posted by Scott Powell at 1:01 PM No comments:

The gorgeous, warm weather just keeps coming our way, and people are taking every advantage of it while it lasts.


Here it is in late October and we haven't even had a hard frost yet around lake, though on the coldest morning (Tuesday) there was a touch of frost in areas most exposed to radiational cooling, evident on the smallest leaves suspended above the warm earth.

Even with warm nights, they have been cool enough for mist to form over the still-warm water on most mornings. 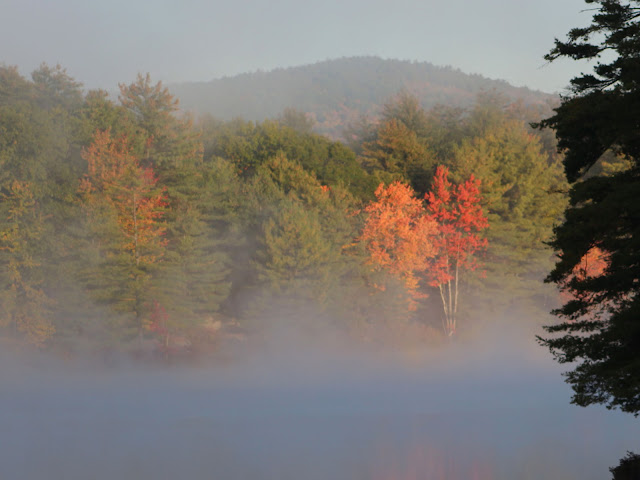 And nothing can stop what must happen;  even though the foliage is still beautiful, leaves are starting to pile up on the forest floor, still bedecked in  their autumn finery. 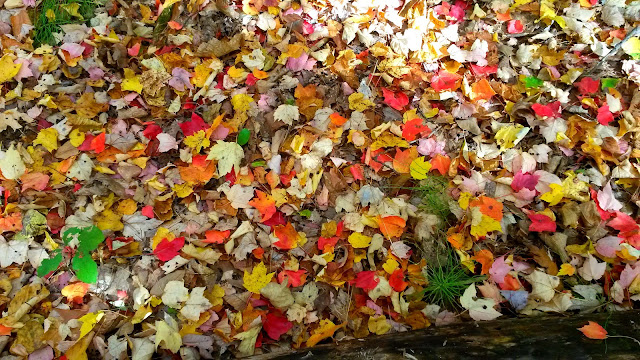 As someone said this week, "we're going to pay for this!"

I noted last week the increased animal activity as they prepare for winter, and this week I had a couple of fun and exciting moments.  The first was seeing a mink running along the shoreline in the morning, poking in every nook and cranny in the bank looking for breakfast.  It was too quick to catch a picture, but here's one from last fall. 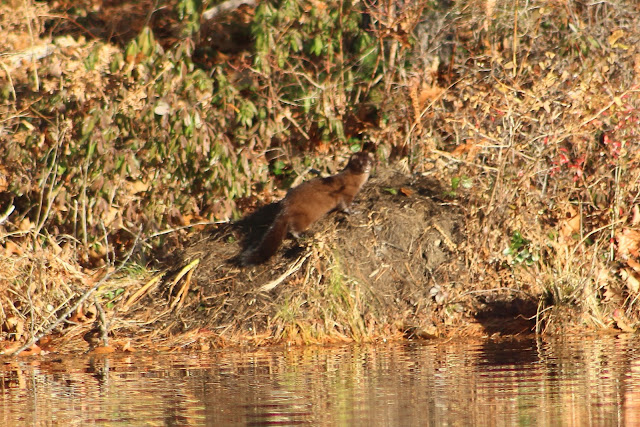 The second was a little more alarming.  I was running in the woods on a trail with soft pine needles under foot, making little noise as soon became apparent.  Suddenly, right over me was a huge object, flapping silently as it flew from behind me, right over my head, and down the trail in front of me.  I've never ducked so fast.  It was a huge barred owl that must have been sitting on a branch over the trail looking away from me as I approached.  As I ran underneath, it was startled and took flight right over my head.  It only flew a short way down the trail and perched in a tree just off the path so I had a great look at this magnificent bird.  But it didn't stay long and took off again on its silent flight into the forest.  Quite a heart stopping moment.  Here's a picture of a barred owl taken in the same area last year. 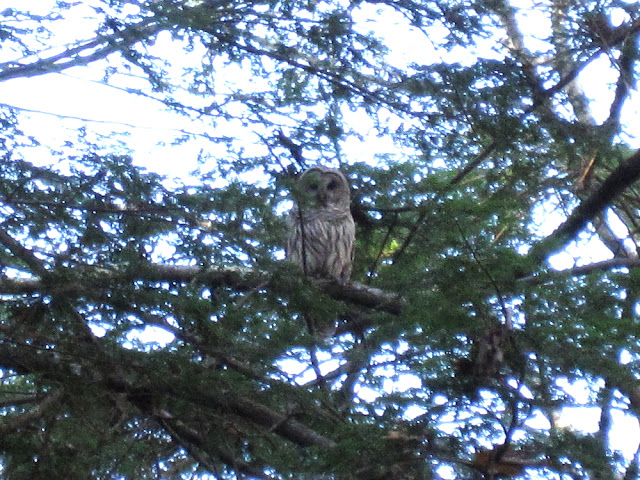 It's likely the same bird, as barred owls are very much home-bodies.  Barred owls have been banded, and one has never been found more than six miles from where it was banded.

We continue to have lots of Wood Ducks coming by Lake Wicwas this fall; every day there are flocks ranging from two or three up to well over a dozen. 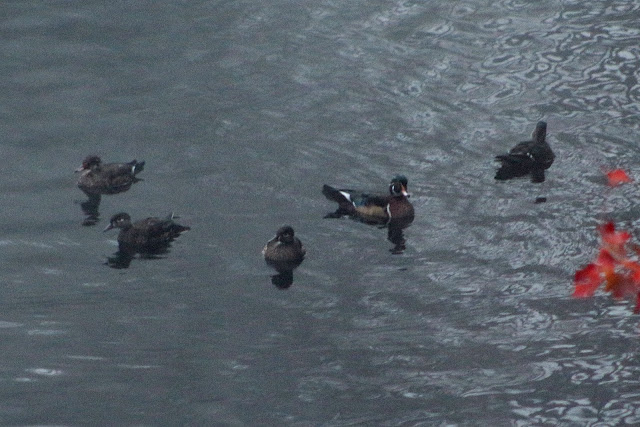 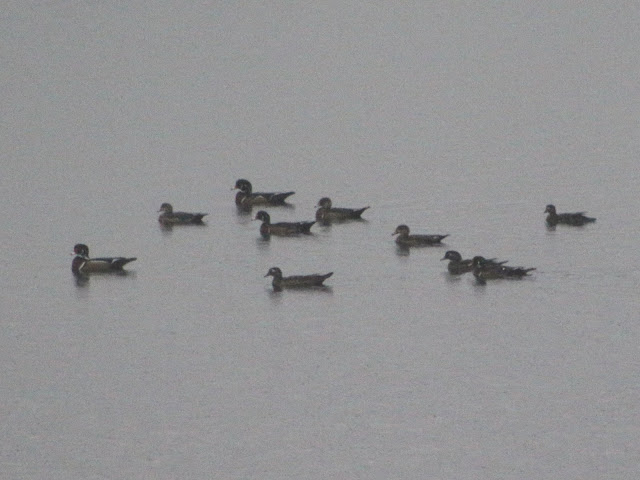 Someone asked where they are coming from and where they are going, so I looked up wood ducks and here's what I found, most of it from Stokes' "A Guide to Bird Behavior" (Volume III, by Donald and Lillian Stokes, Little, Brown and Company, 1989).

Wood ducks are the only perching duck in the northeast, having well-developed claws for perching on branches and nesting in tree cavities.
Much like the beaver, they were nearly exterminated in the early 1800s as the European settlers cleared away their nesting habitat and hunted them extensively.  Conservation efforts started to bring them back, but then the hurricane of 1938 brought another blow (no pun intended) by destroying many of the large trees needed for nesting.  The Great Meadows National Wildlife Refuge in Concord Massachusetts started a program of constructing nesting boxes for them, which was successful and soon copied in other areas, and there is now a healthy population of these pretty birds. 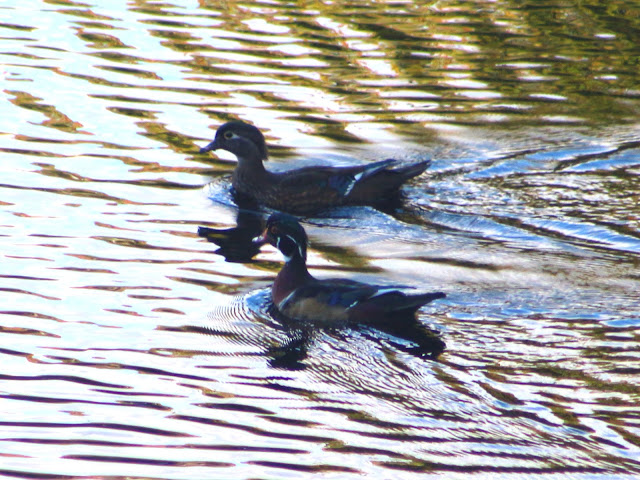 Hunting of them is once again permitted, which accounts for the shotgun blasts heard around the lake at exactly 30 minutes before sunrise this time of year.  Early morning and late evening is when they are most visible, which unfortunately means poor lighting for pictures, but every now and then one stops by in the sunshine.

Stokes reports that New England wood ducks (and I presume birds from Canada as well) migrate down to the Maryland area and then spread out along the mid-Atlantic coast, so I expect New Hampshire's lakes are a good stopping point to rest and stretch their wings along their way. 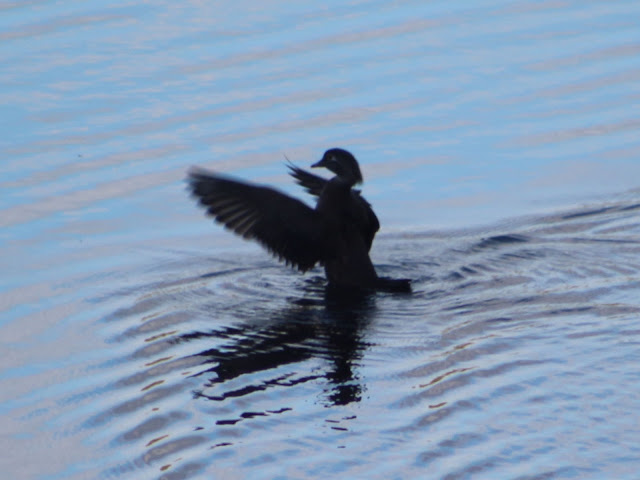 Finally, perhaps traveling through Meredith Center this week you saw that the church is having its steeple renovated, the tall white spire contrasting sharply against the autumn sky. 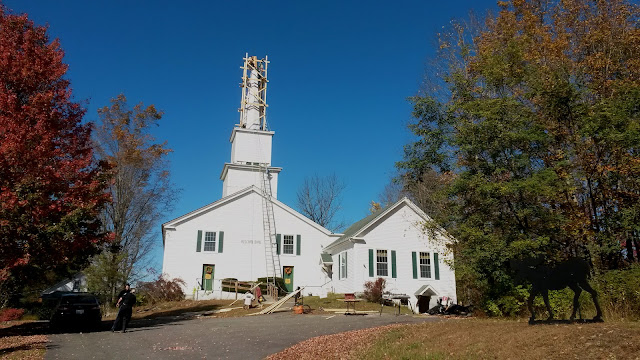 It is one of the most beautiful times of year in New England, and I'll take this weather for as long as mother nature can fend off old man winter.

Posted by Scott Powell at 5:30 PM No comments:

Yet again we had beautiful fall weather this week, perfect for a hike or a paddle, so I did both - with great company.  First we took a drive up to Rollins State Park and walked to the summit of Mt. Kearsarge.  It was cool and windy on the summit, with clouds rolling just above us which kept the colors subdued.

But the valleys were bright except where the low fog was still hanging over Lake Winnipesaukee and the Merrimack River.

Then yesterday I had a warm, peaceful paddle on Wicwas with a long-time friend and colleague, enjoying the bright foliage reflecting off calm blue water. 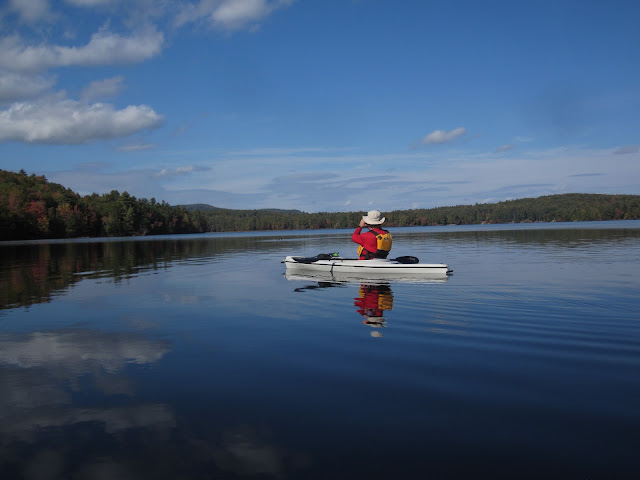 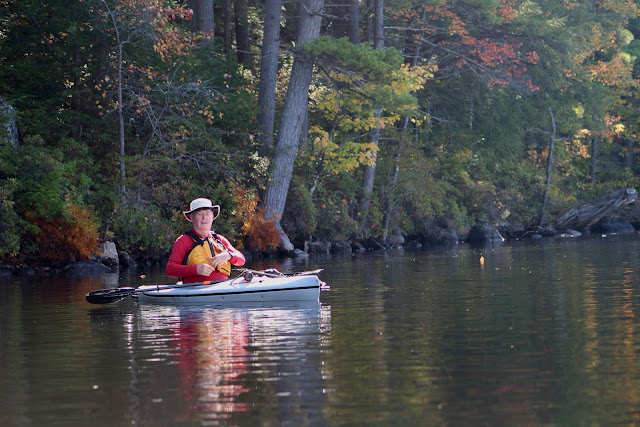 We met a few other paddlers also out enjoying the day.
We were all attracted to a loud racket coming from the east shore of the lake, along Loon Point Rd.  As we approached it was clear the source of the noise was a massive flock of birds up in the trees - hundreds of them.  Those on shore (thanks CB) said they had been there for quite a while.  After a consult with the Cornell Ornithology mobile app, I determined they were Common Grackles.  You can hear the ruckus they make here; listen to the "Calls of flock" recording.

We also found a pair of loons on the lake, their plumage starting to change from their sharp, black and white breeding colors to their gray winter appearance. 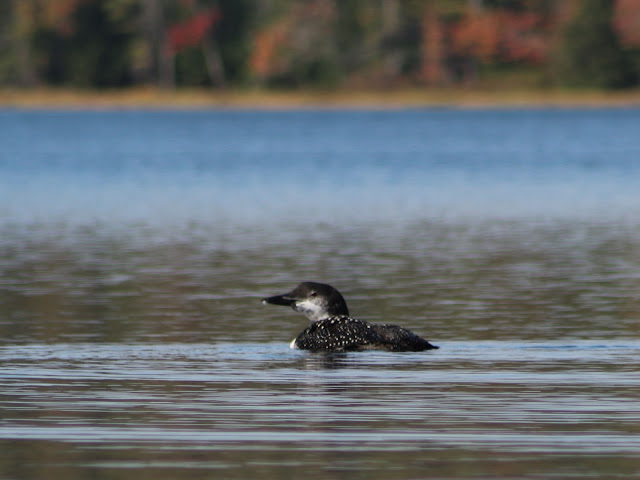 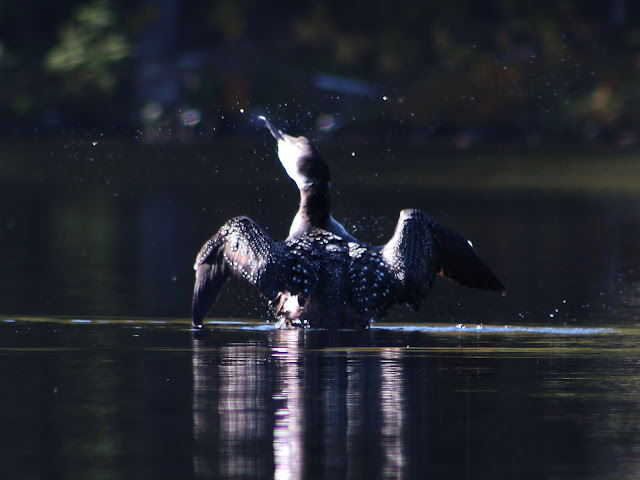 One was preening for us, and when it rolled over to pay attention to its belly we were able to see that it was our banded female - no surprise there!

As cooler weather arrives, decreasing human activity around the Lakes Region is replaced with a rise in animal activity.  Migrating birds are starting to come through New Hampshire on their travels south for the winter, and the animals that live here year-round are busy building up their winter energy sources, either through caching food or increasing their stores of fat.  These hardy year-rounders are also winterizing their homes, preparing for a New Hampshire winter just like we are.
It's amazing how much noise a small animal can make rummaging around in the dry leaves this time of year.  I'm sure there's a bear, or a least a good size deer tramping through the woods near me, but when I stop to look for it, I find it's just a gray squirrel, or maybe even a chipmunk making all that ruckus. 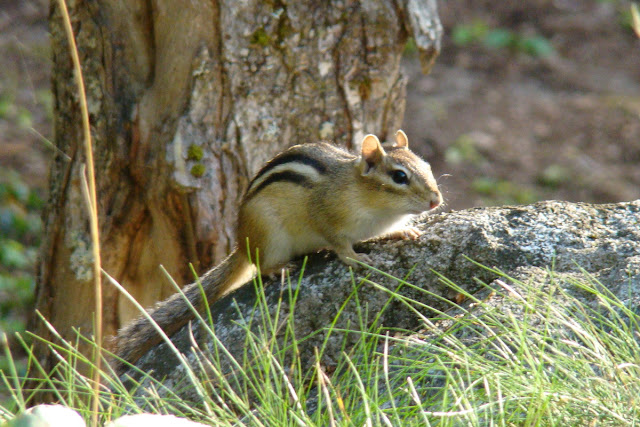 I would be remiss if I didn't share some of nature's beauty now on display;  I think the Maples this year are some of the best I have seen. 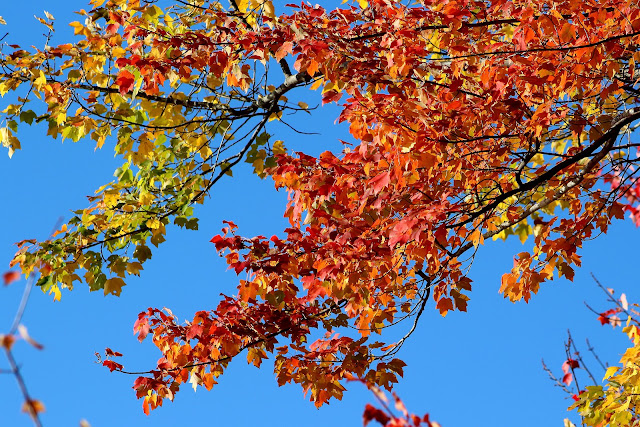 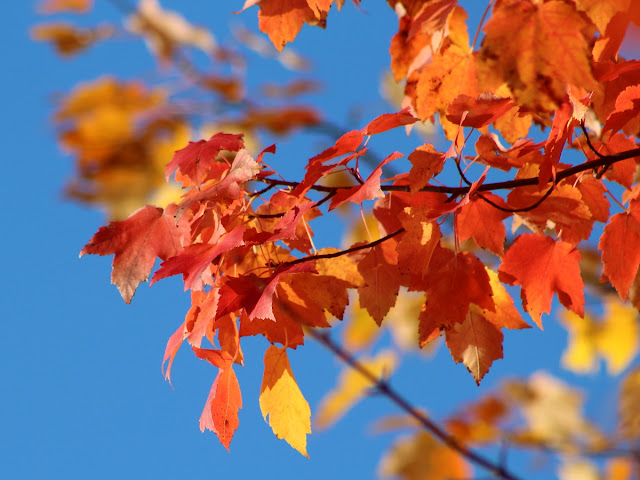 If you haven't done your New Hampshire foliage viewing yet, there's still time, but it's getting short.

Posted by Scott Powell at 5:59 PM No comments:

The glorious weather this week hasn't been able to stave off the foliage progression, as waning sunlight continues to deplete chlorophyll levels in the leaves regardless of the temperature. 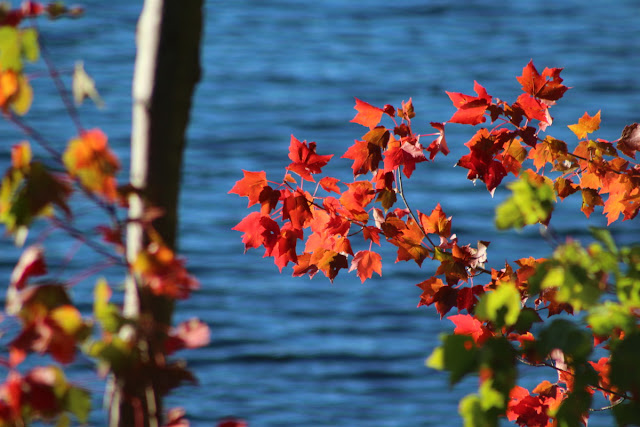 Even the lilly pads are getting in on the action.

The beaver population throughout New Hampshire continues to expand, at least as far as I can tell.  We now have one or two beavers swimming past every night, just before nightfall.  They are coming on shore everywhere, cutting small openings along the bank where there are are none, and building large scent piles to mark their territory.
If I go outside they pick up the slightest motion and jump in the lake. They'll swim around a bit and give some loud tail slaps - one night I was treated to four of these.

Beaver are genetically programmed to stop any flowing water, bringing much agony to people who manage dams.  This fall they have been persistent at stuffing the Lake Wicwas dam with all kinds of debris.
We can't thank the town employees enough for dealing with this disgusting mess - downstream are the remains of prior clear-out work.
It's quite a success story for these, our largest rodents, after having been completely eliminated by trapping in the 1800's.  Between 1926 and 1930 six beavers were released in New Hampshire - has this entire population grown from those six animals? 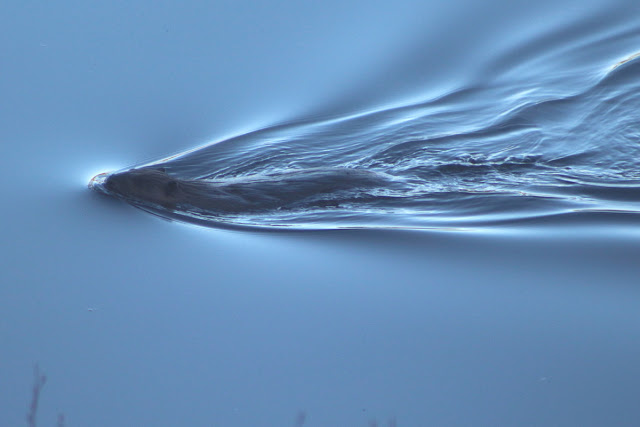 The Indian summer has confused the blueberry bushes, as I saw some bewildered plants that are setting new blossoms.
But no, I don't think we'll get a second blueberry crop this year.

It's still early, but the peak foliage will be coming to the Lakes Region soon; hopefully you'll be able to get out and enjoy it - either on land or on water.

Posted by Scott Powell at 11:00 AM No comments: