Only in the winter of 2012 would people be excited about a minor snowfall of five or six inches.  But considering it's perhaps the most snow we've had since November, it was a big deal.  If nothing else, it made it feel like winter again. 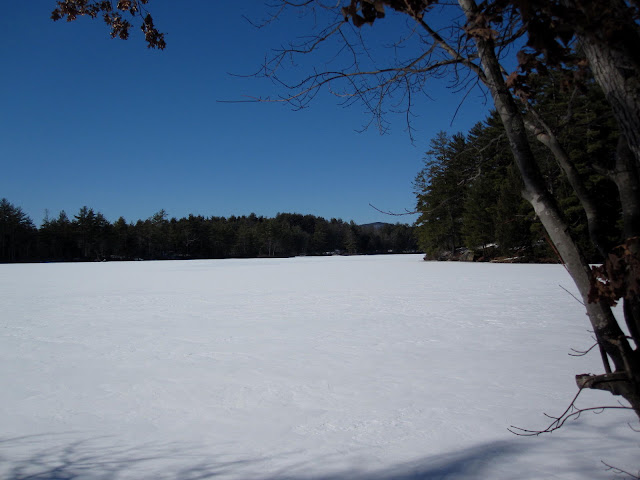 All the warm weather of the preceding two weeks has taken their toll on the ice as well as the snow.  South facing shores of Lake Wicwas have large stretches of open water. 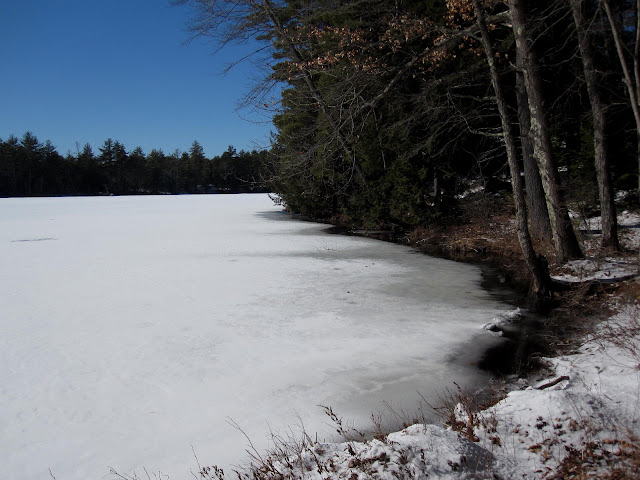 The impact of longer days and more intense solar radiation is particularly evident where the water is shallow and well exposed.  This looks more like mid to late March than February.  Anyone for swim? 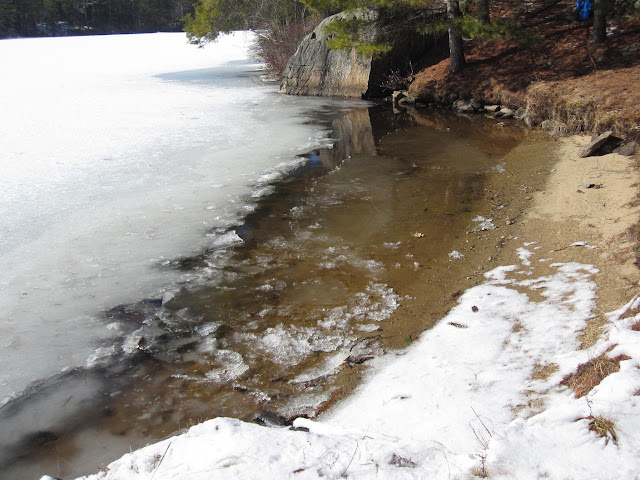 The otters are!  They are taking advantage of the many openings and warm weather to travel on dry land.  This is an "otter roll" and a slide (hard to make out) going back into the lake. 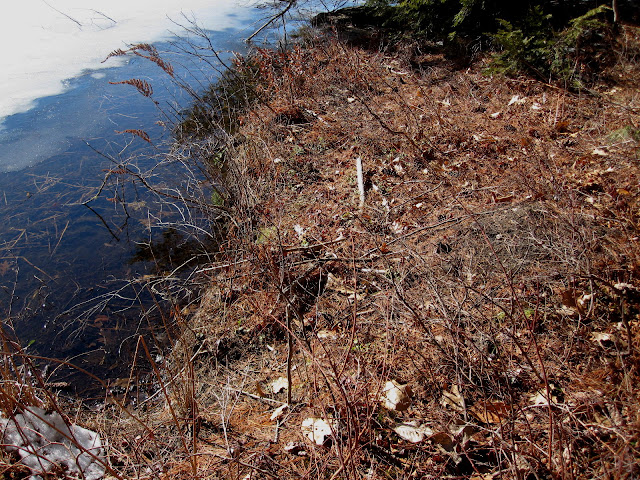 Last week we were following along one of the many stone walls around the lake, and found some old barbed-wire that was strung along the wall.  I was amazed to see where the wire passed completely through a tree, almost straight through the center. 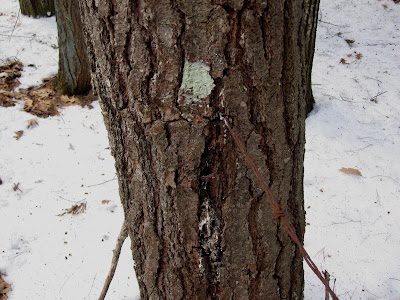 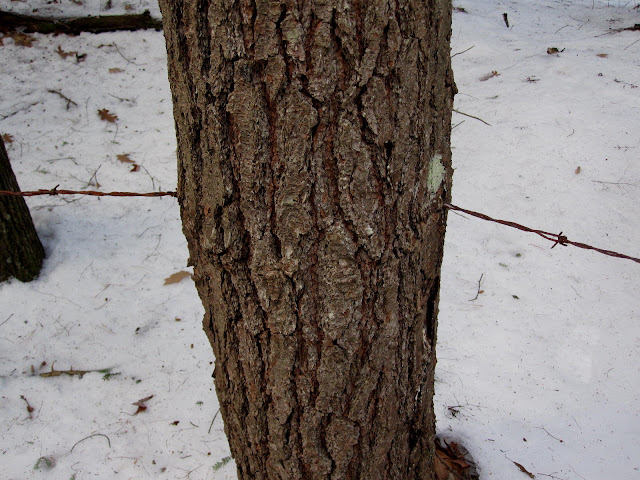 There were several trees like this, so I'm guessing that the wire was attached to the tree when is was quite small - otherwise it wouldn't pass through the middle of it.  The tree is 18 inches in diameter.  I'll guess that it's maybe 70 to 90 years old, which dates the placement of the wire around 1930.  This is well past the peak of the sheep craze, so perhaps sheep farming continued longer around Meredith Center.
Posted by Scott Powell at 8:34 PM No comments:

Meredith hosted the fishing derby this weekend, and there was plenty of activity out on Lake Wicwas for the big event.  Fisher-people were scattered all over the lake, including a well-equipped village on the north side of Bryant Island.  They had quite a group, with huts, vehicles, and high tech equipment, and they were having good luck, catching perch, pickerel and black crappie. 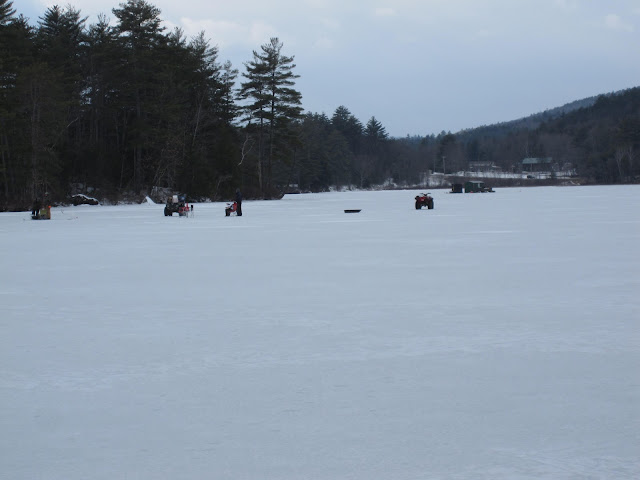 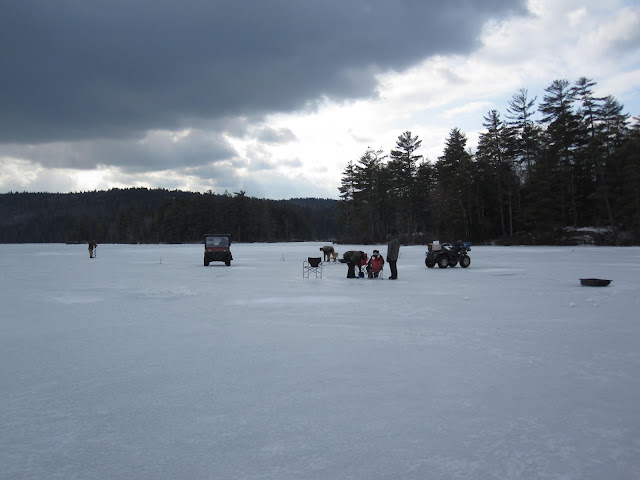 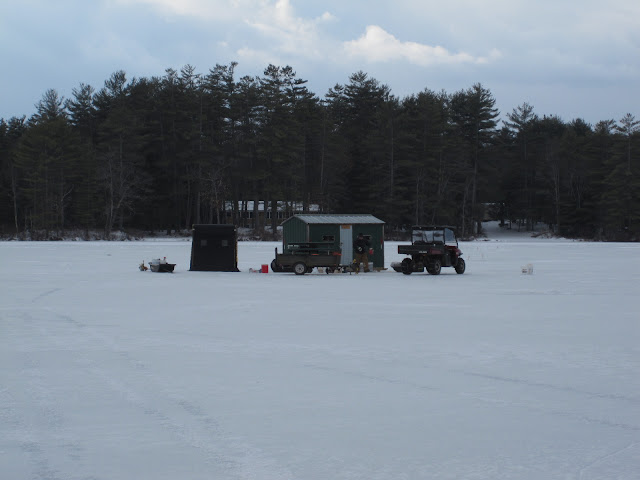 They even had air support! 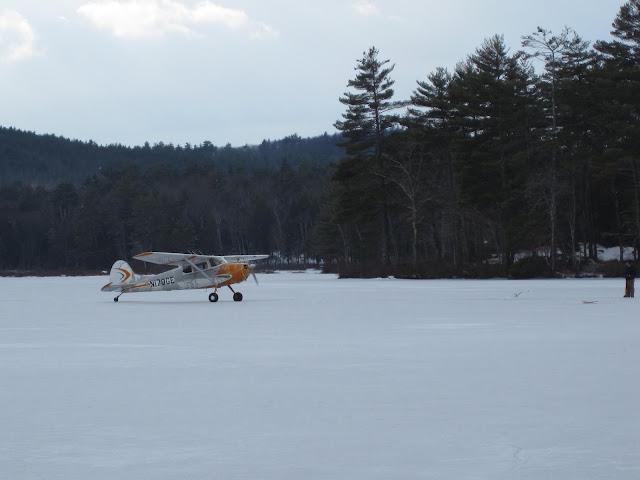 The pilot flew in Barnstead to bring reinforcements.  He took off while I was there, soared up high, then veered back and gave us a low altitude flyover.

I kind of like the low-tech style of ice fishing, bringing out the supplies via sled.  This bob house was my favorite, complete with American flag and a wood stove. 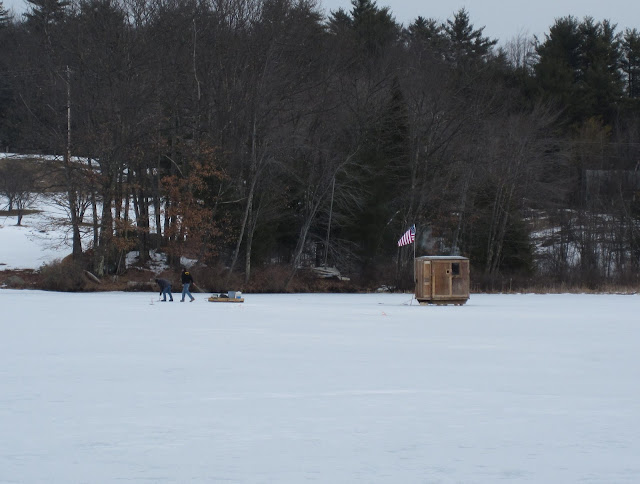 The ice was good enough for skating again, which made for quick travel around the lake.  How crazy is that, to be able to skate on the entire lake in the middle of February?  Here's a nice look at the newest house on the lake, which has been in progress for well over a year now. 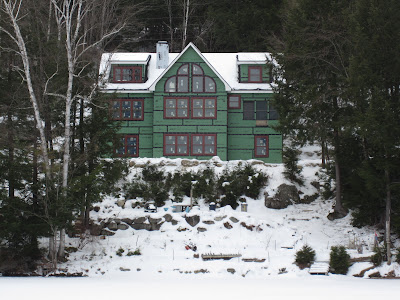 Back on the nature-side, we took a walk through the blue trails in the Hamlin area and explored some of the beaver ponds.  The paths are pretty icy from all the melt and freeze cycles.

On one of the beaver ponds, the rising water from the beavers enlarging their dam is evident in recently killed hemlock trees along the shore line of the pond.  Most of the shoreline looks like this.

As many know, one of the bridges has been washed out, but the stream crossing is easy with the low water.  It will be a different story come spring.

From a different bridge, water swirling around the rocks had created an artistic ice pattern. 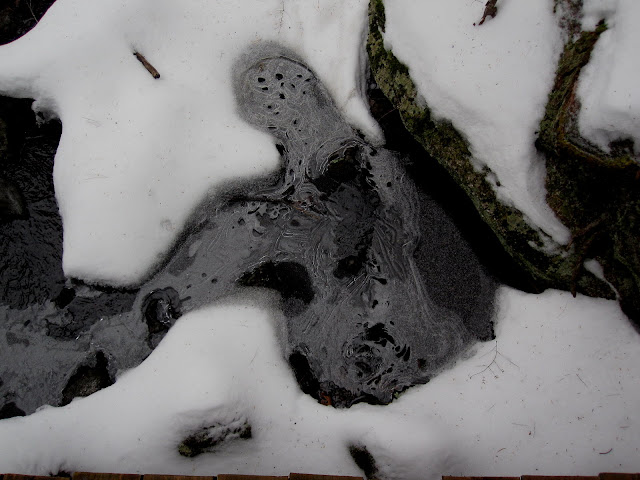 Back closer to home, the animals have taken away the half of the deer backbone with the skull, leaving only the rear half.

This is all that's left of the original site - the crows eventually even went after the intestines, and now they hack violently at the few remaining bones, trying to get at the marrow. 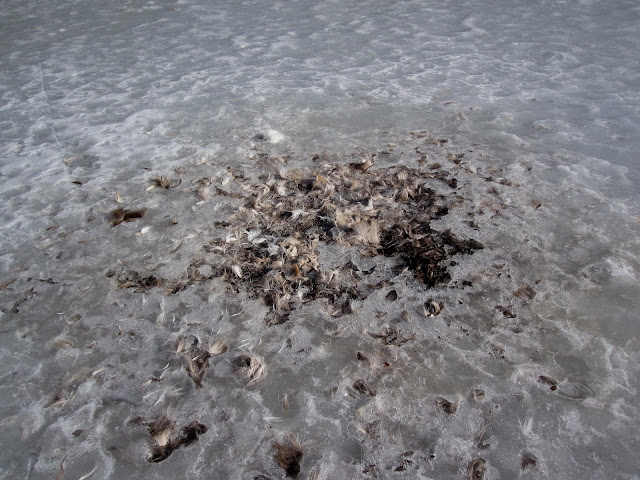 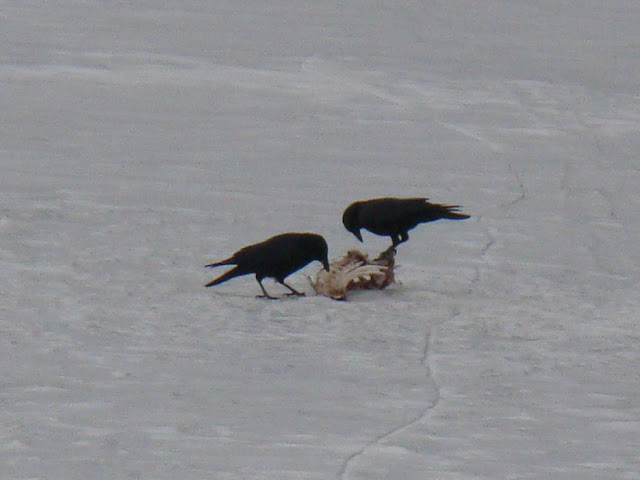 After dark we had another visit from a flying squirrel.  This time I couldn't resist going out and scaring it off the railing to see if they really can fly, and I wasn't disappointed.  In fact, if I didn't see it with my own eyes, I wouldn't have believed it.  When it jumped off, it dropped straight down for a few feet to pick up air speed.  Then it spread its "wings" and soared in a perfect parabolic arc right across the yard toward the lake.  It flew straight towards a tree, and about ten feet away it pulled up, gaining maybe five feet of altitude to reduce its speed, and timed the physics perfectly so that it land gently right on the trunk of a tree.  It soon returned and we got to see an encore performance.  How did a mammal learn that skill and gain that capability?

Posted by Scott Powell at 10:45 AM No comments:

Lake Wicwas was treated to some beautiful winter weather this week - seasonably cold, not bitter, with bright sunshine and blue skies.  We took advantage of the nice weather to explore some different areas around the lake.  We discovered another beaver lodge - rather small - which brings my count of lodges on the lake to ten, and I doubt I've found them all. Nearby was this rather interesting way to fell a tree - cut 90% of the way through, then start all over again a bit higher. 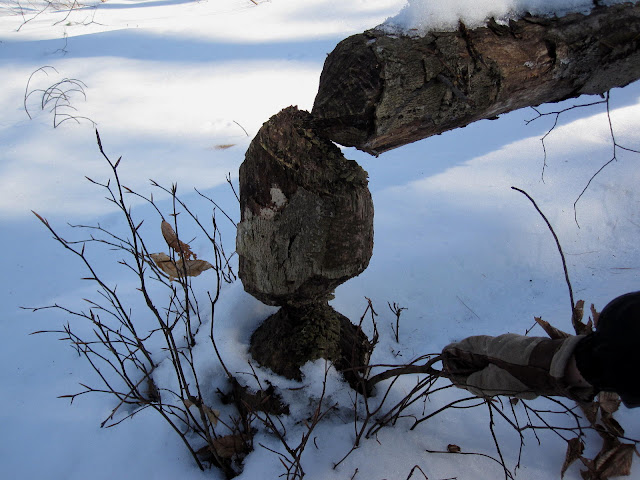 Maybe junior started it, and then grand dad came along and didn't want to bend over.

We also discovered some new pileated woodpecker activity:  a hemlock with half a dozen new holes where the bird had drilled up to four inches to find insects hiding deep in the trunk.
There were a variety of sizes and shapes where it followed the sound of its prey. 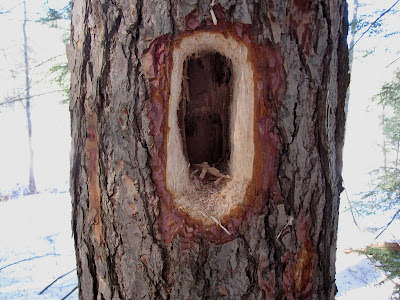 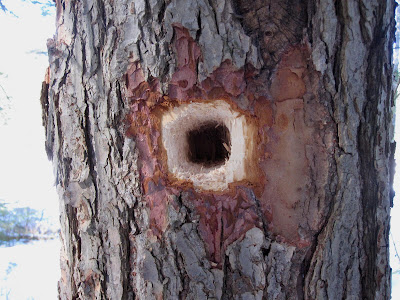 The trees around here certainly do have to deal with a lot of attacks on them.  If not beavers, it's insects or birds, and sometimes both!

Although we're still a couple of days away from the full Snow Moon, Saturday night was crystal clear, and the lake was lit up enough to wander easily without any man-made light. 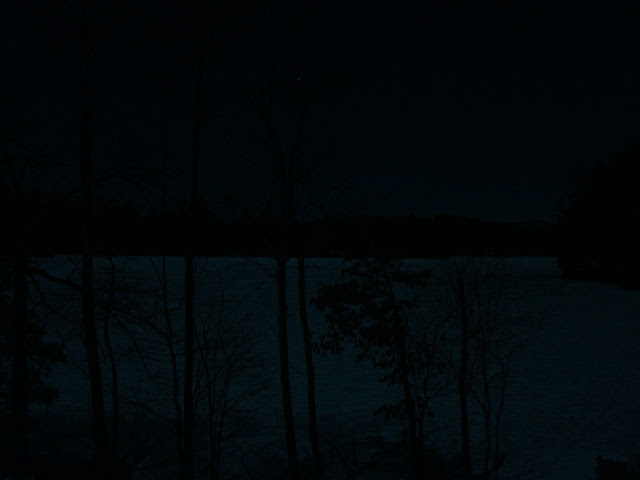 With abundant moonlight, not many stars are visible - I took one 30 second exposure straight up which shows the motion of the earth under the stars. 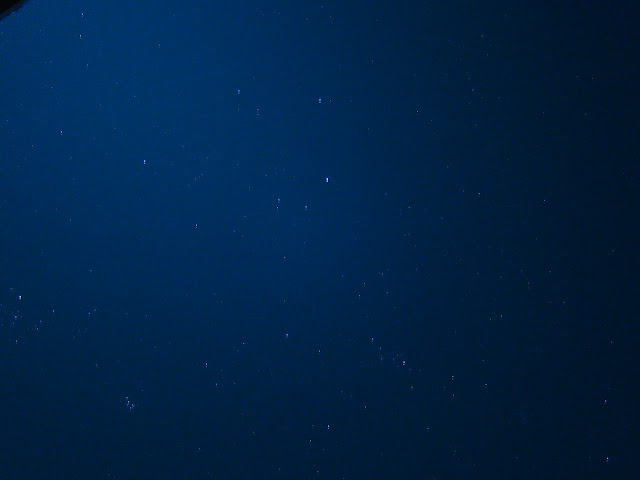 There was almost no activity around the remains of the deer the past few days, but the coyotes and crows were back earlier in the week to finish off the leftovers.  Now only the skull and backbone remain, and even the crows only pick for a minute before moving on. 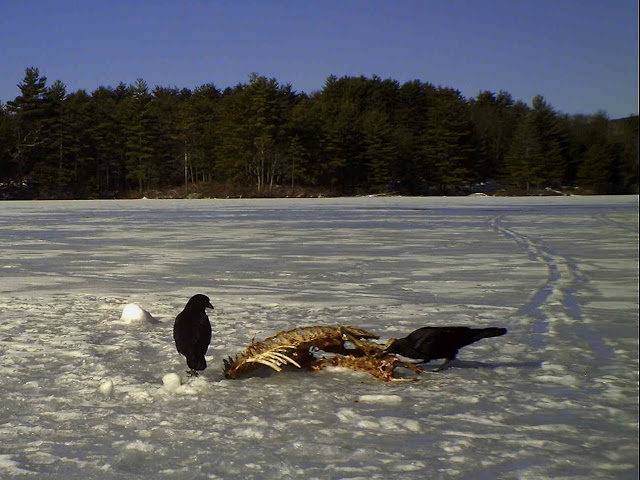 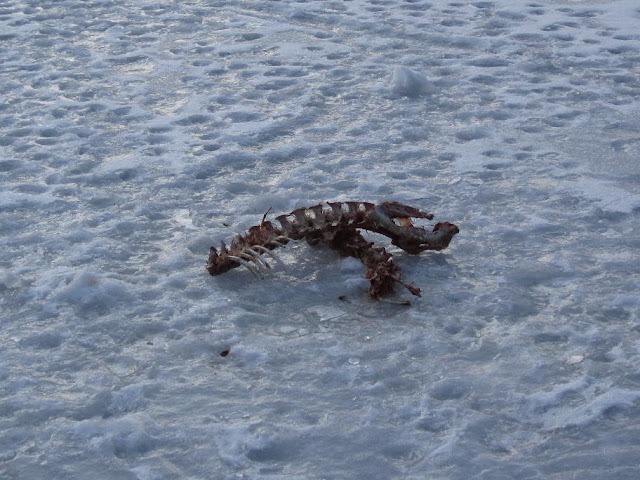 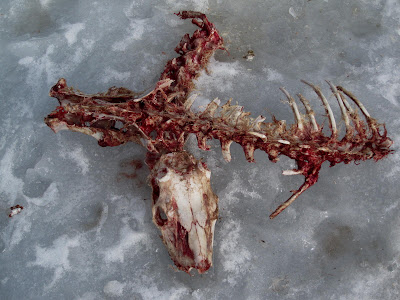 And no, I didn't pile up the bones like that.  Unless another human visitor moved them, it was the animals that left "X marks the spot".

In leaving their own mark, the coyotes show that they are maintaining a well balanced diet, adding seeds and fiber to their protein!

But we did finally get the visitor we were waiting for:  a bald eagle (immature).

It saw an object on the ice (X-marks the spot?) and came down to investigate.  Finding little left, it took off after just must a minute without taking a peck.  With it's good eyes, though, it spotted us watching from the window! 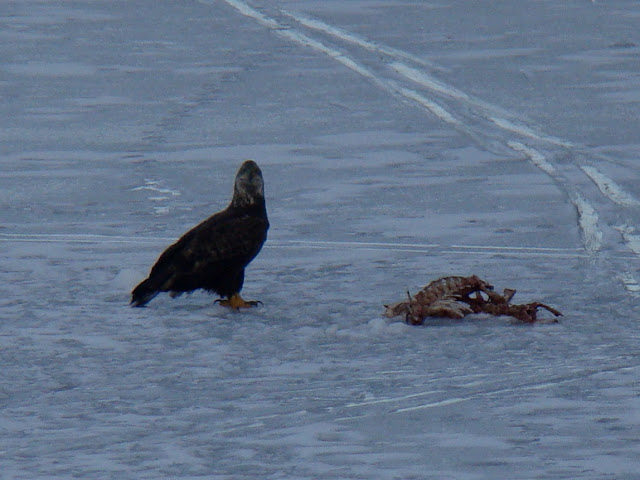 Posted by Scott Powell at 4:31 PM No comments: