The new loon chick continues to thrive on the abundant waters of Lake Wicwas - I send many thanks to the loon watchers who continue to send me such great pictures.  These photos were taken by Marge and Dave Thorpe, who just yesterday were recognized at the Lake Wicwas Association annual meeting for receiving the John F. Morten Award in recognition of their exemplary stewardship of the lake by the New Hampshire Lakes Association!  (There was also a great presentation on Osprey and their migration from New Hampshire to South America by Iain MacLeod, Executive Director of the Squam Lakes Natural Science Center. If you missed it you can read about the osprey journeys here:  http://www.nhnature.org/programs/project_ospreytrack/ )

Mom was proudly showing off her leg band again with a foot wag, 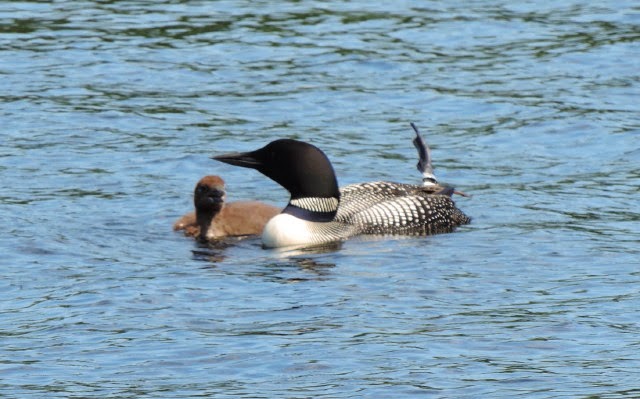 and the young protege had to show that he/she could do it too! 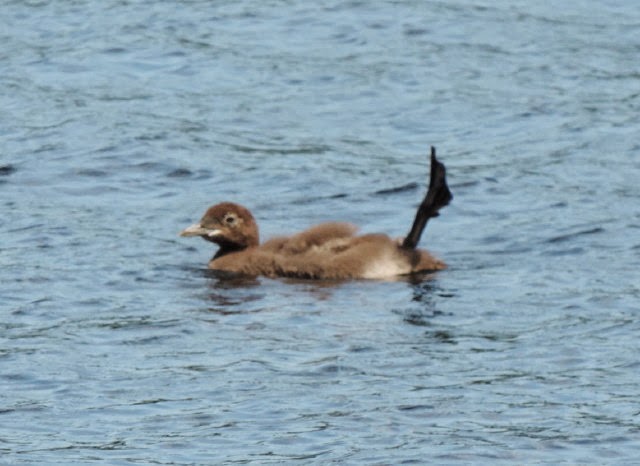 Another observer watched one the parents providing the chick some fishing lessons.  It came up with a small minnow, brought it over to the eager chick, who was then very dismayed to not have the fish popped in its beak, but rather to see mom drop it in the water for the chick to catch.  The chick watched in confusion as the minnow swam away, then dunked its head under the water a few times to look for it, and learned an important lesson:  if one wants to eat, one better work for it!

Although getting to be good size now, 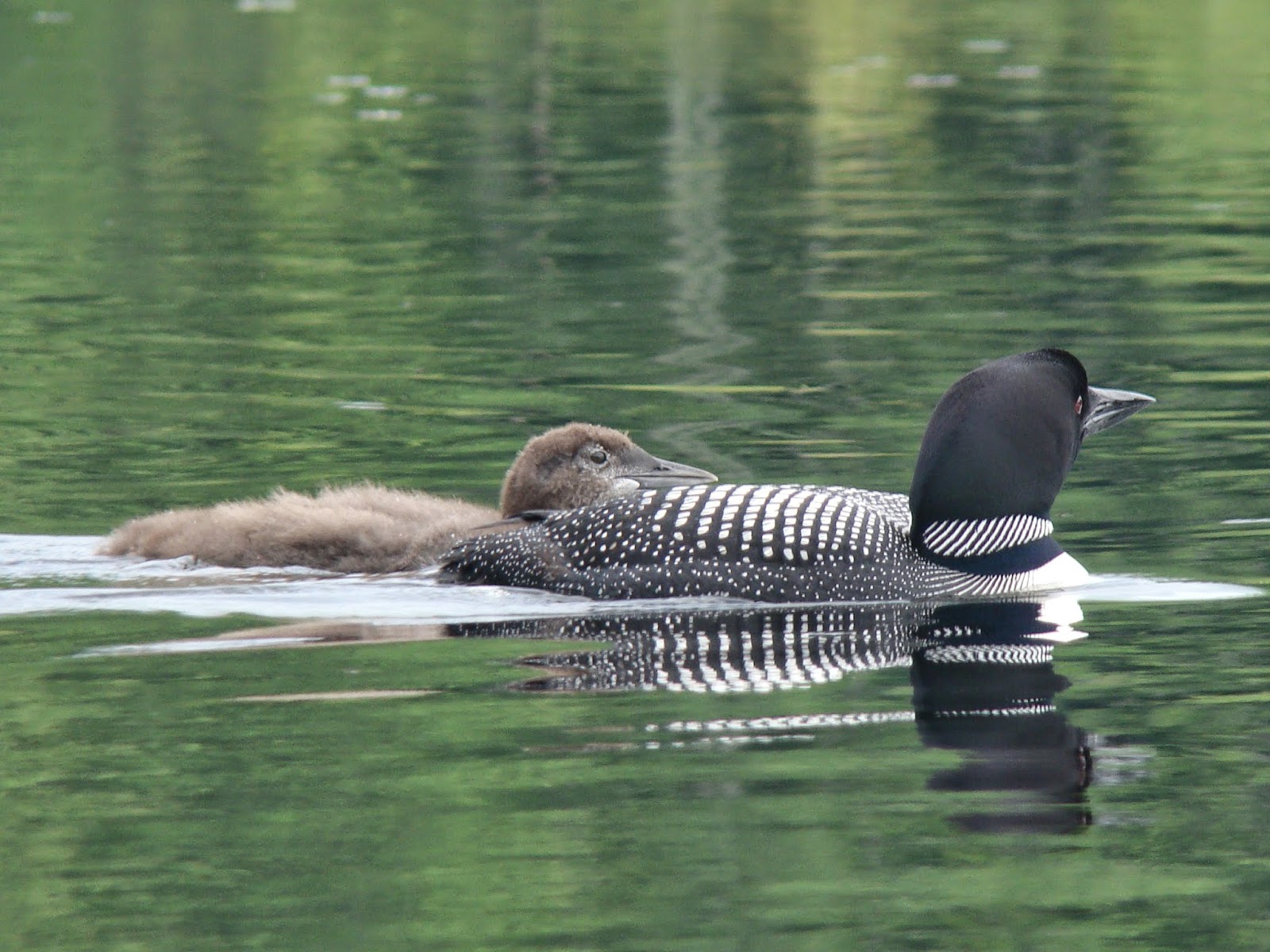 it is still a fuzzy, downy, young bird. 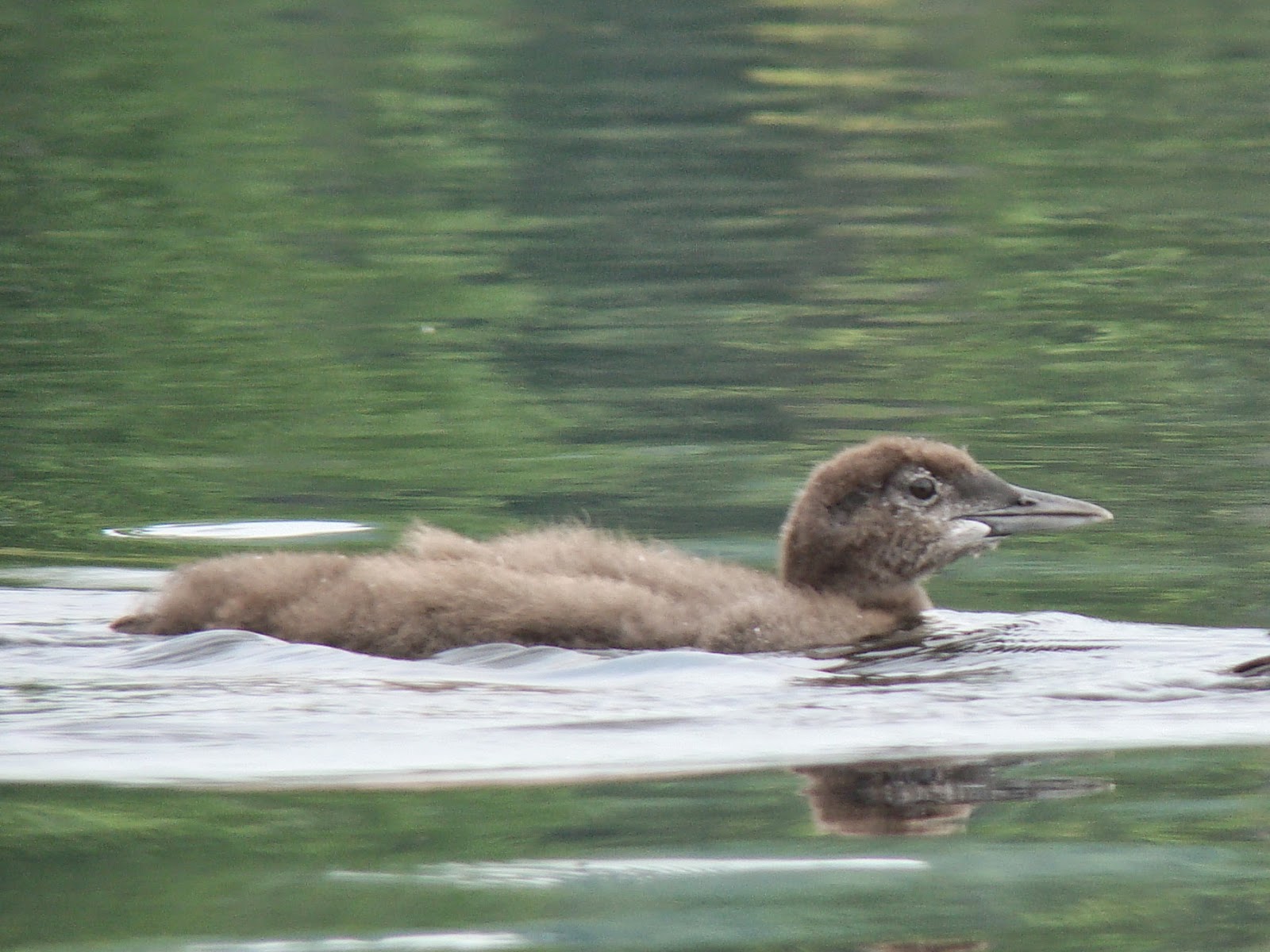 I saw another pair of water birds, Black Ducks, on the lake, but if this pair had ducklings, they were nowhere to be seen.  The drake was up on a rock, visibly preening itself, while the duck and any ducklings were hidden away in the reeds and bushes close by. 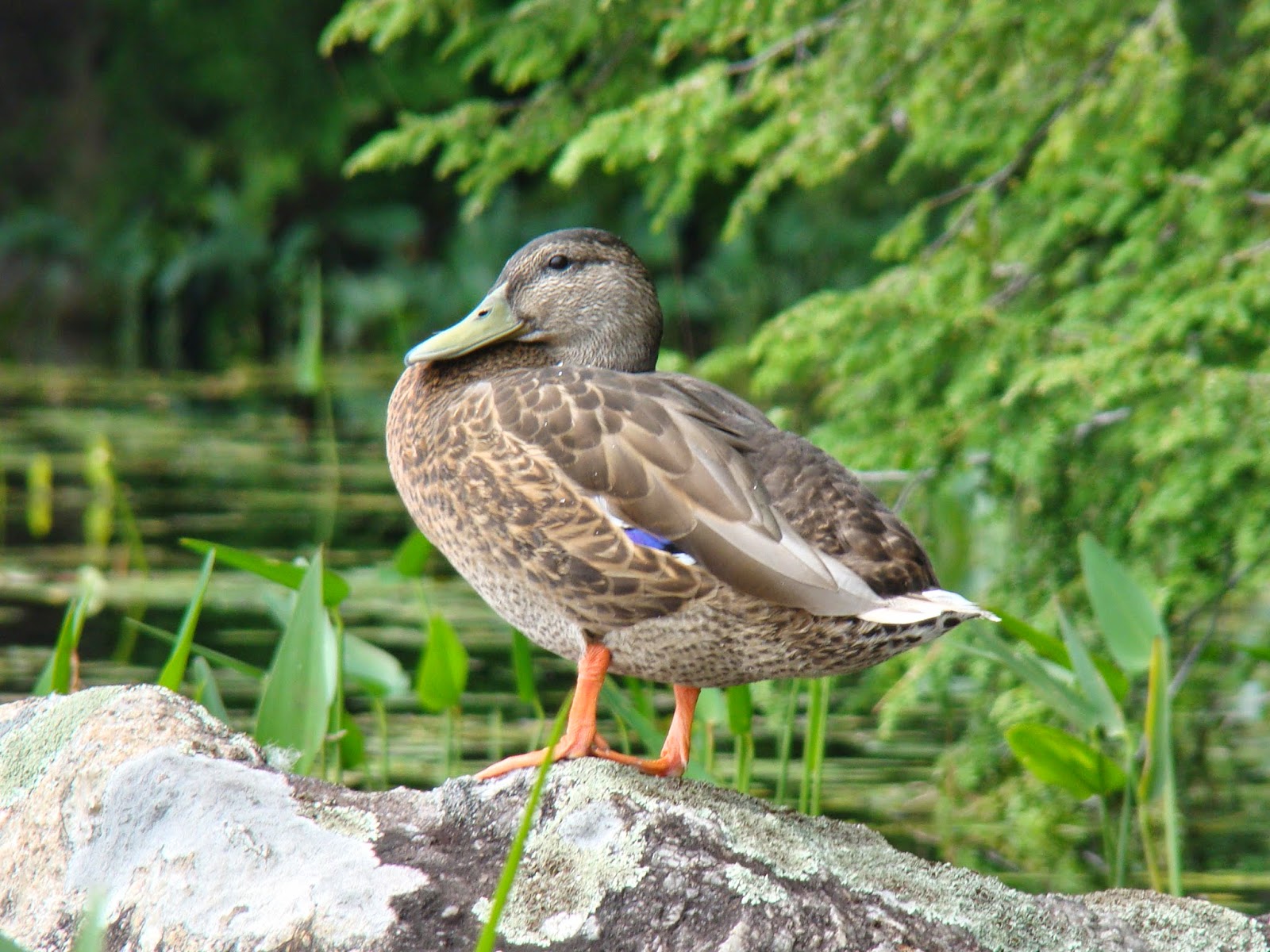 One other bird, a visitor from the ocean, was on the lake playing sentry: 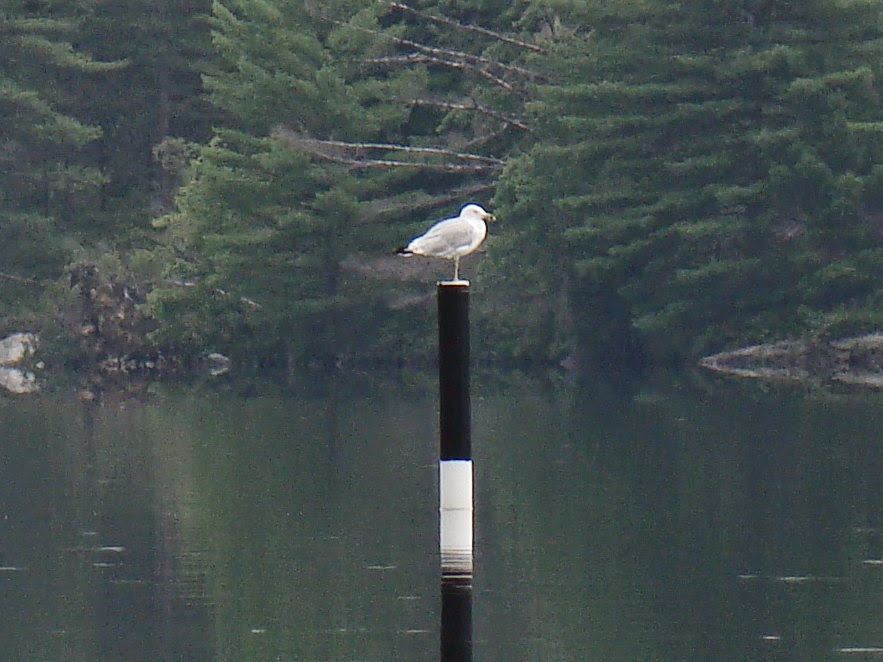 Seagulls like to hang out on the buoys, watching for small fish to rise near the surface, and then grab them for lunch.  They are safe out there from competing with the Opsrey which tend to fish from trees overhanging the shoreline.

Along the shoreline I saw a small stand of Skullcaps blooming.

These are called Common Skullcap, Hooded Skullcap, and Marsh Skullcap, as their preffered habitat is marshes and wetlands.  It is considered an herb, and was used by Native Americans as a medicinal sedative, though its medical properties have not been formally documented.

Other summer flowers in bloom are the Meadowsweet, also a perennial herb, though not indigenous to America, and the Hedge Bindweed, a member of the Morning Glory family. 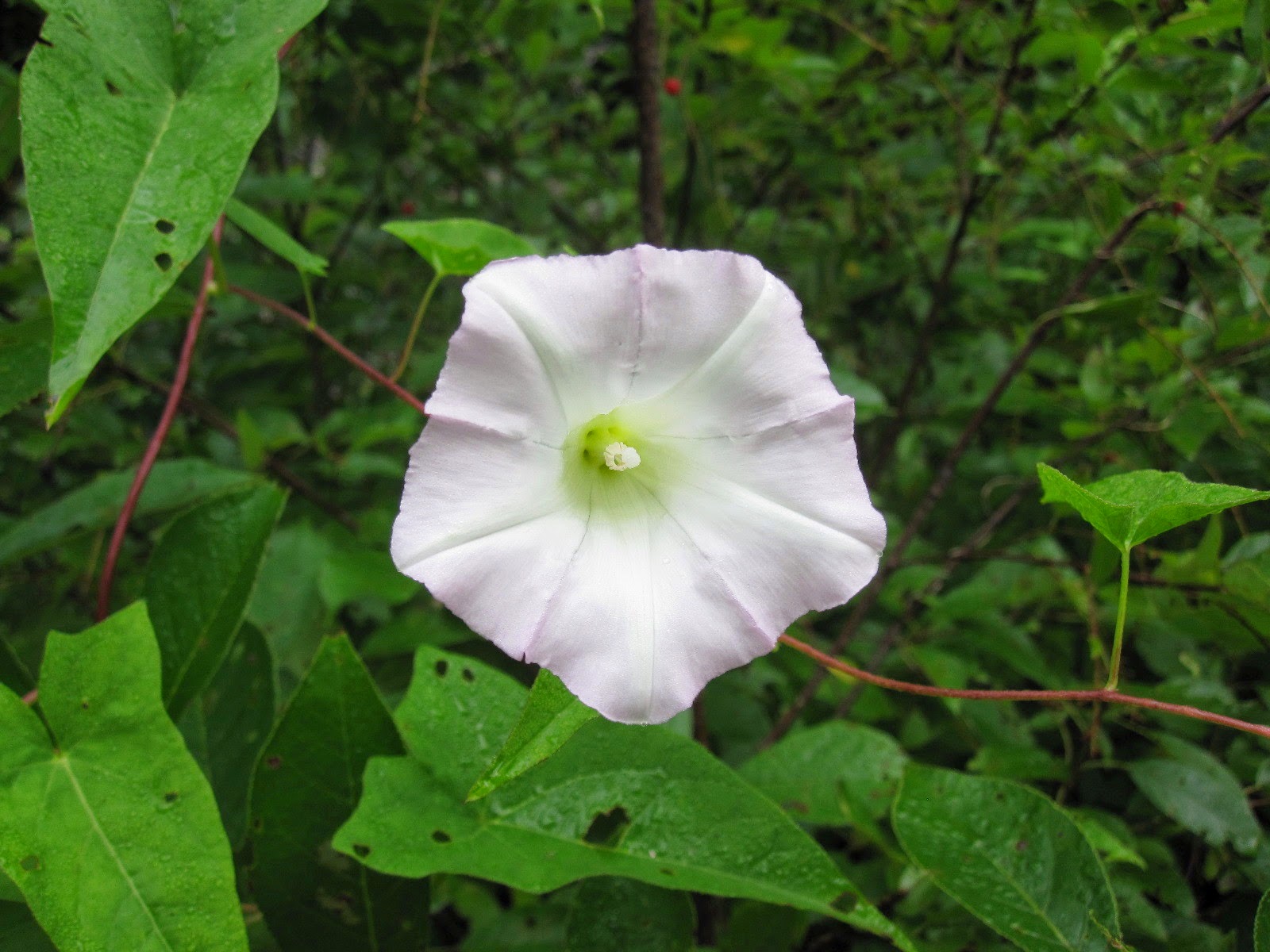 A bit farther inland, I found this large Sulphur Shelf mushroom growing on a oak stump - it is well over a foot across.

It is also called a Chicken Mushroom, as it is edible and is supposed to have a taste and texture like chicken, though I'm not about to try it - I'll stick with the blueberries!   Blueberries are still out there, though the Black Cherries have been totally cleaned out now.
Later this week I will post a review of the Black Cherries, as I followed their progression from flower to consumed fruit this year, so keep your eye out for a mid-week post.