No sightings of eagles around Lake Wicwas this week, but far on the other end of the avian spectrum I found a tiny new bird:  a Winter Wren.  I have often heard the loud chattering of an unrecognized bird deep in a thicket as I walked by various areas of undergrowth (such as the Black Cherry patch) but could never see the source through the dense foliage.  This particular morning I stopped to look because they were cavorting about an area where an old pine tree had fallen down, crushing a lot of the small trees and thus opening up some sight lines. 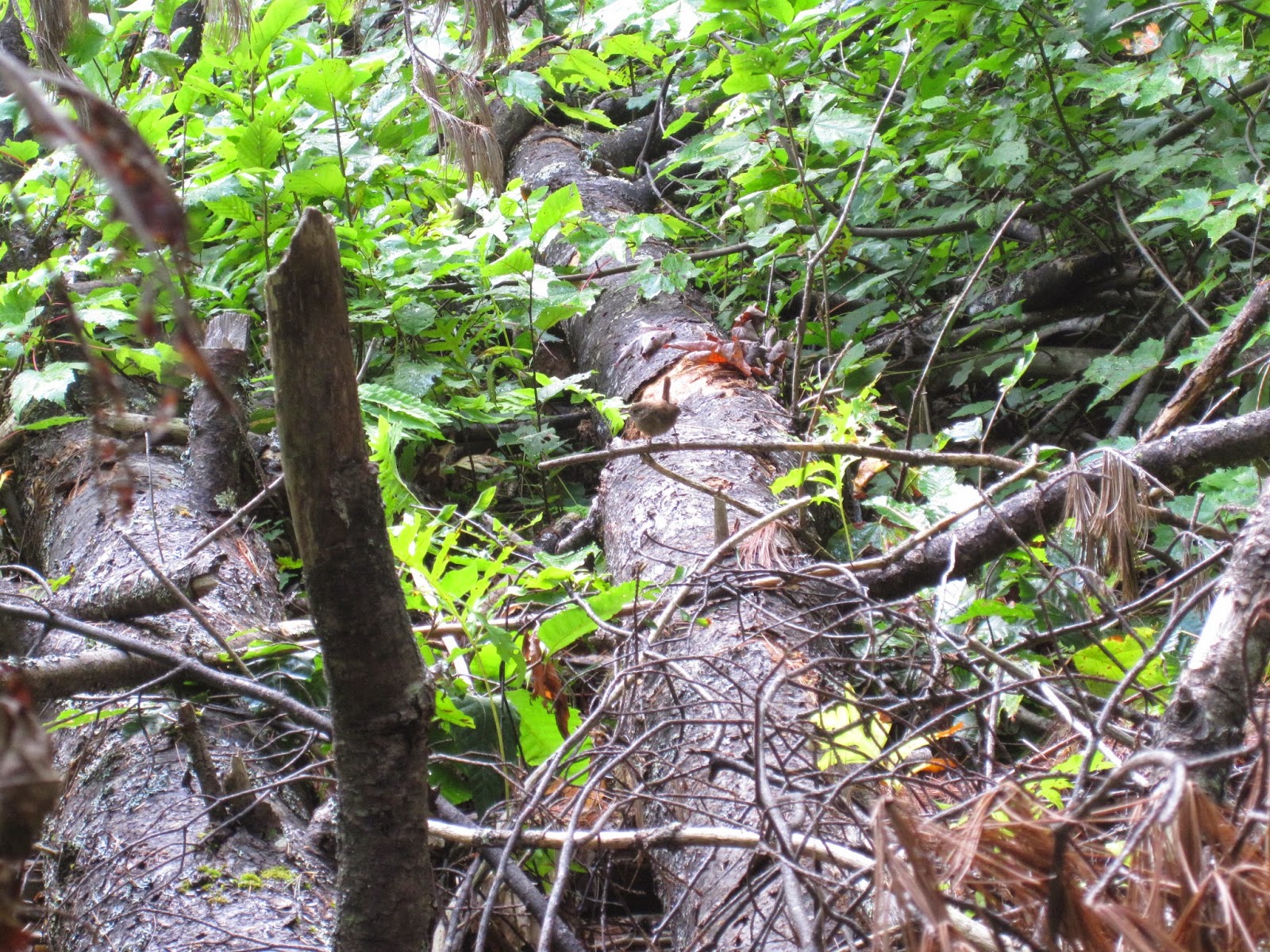 I saw four or five tiny, nondescript brown birds hopping around the branches, probably picking small insects - ants, caterpillars, spiders - off the leaves and trunks.  They made frequent short chirps.  I watched motionless for several minutes, and eventually one or two flew close enough to take a fuzzy picture in the dim light, but sufficient to to take home to look up in the nature book.  One photo was good enough to see small white dots lining the edge of the wings, which identified it as a Winter Wren. 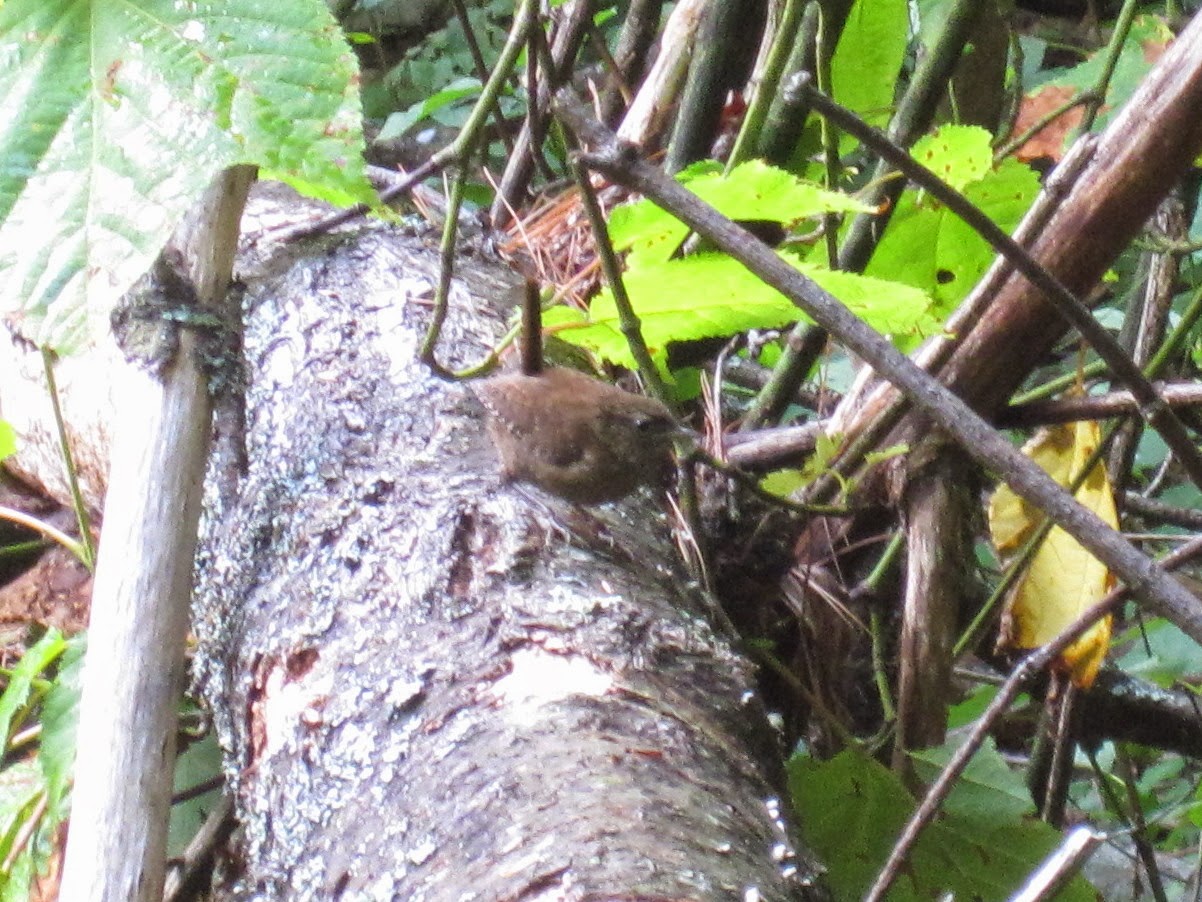 The Cornell Lab of Ornithology says Winter Wrens are ground feeders, often found in low shrubs and on fallen logs and trees, further confirming their identity.  I believe these are quite common, but based on their chosen habitat, I had not observed them previously.

Another one of our small birds, the Goldfinch, will likely be visiting soon, as we have a wild Bull Thistle blooming.

Before long the goldfinch, and possibly the chick-a-dees, will be tearing into these flowers to rip out the tiny seeds.


No other animal is likely to touch them due to the incredibly sharp thorns on the branches, leaves, and even blossoms. This plant is also aptly known as a Spear Thistle. 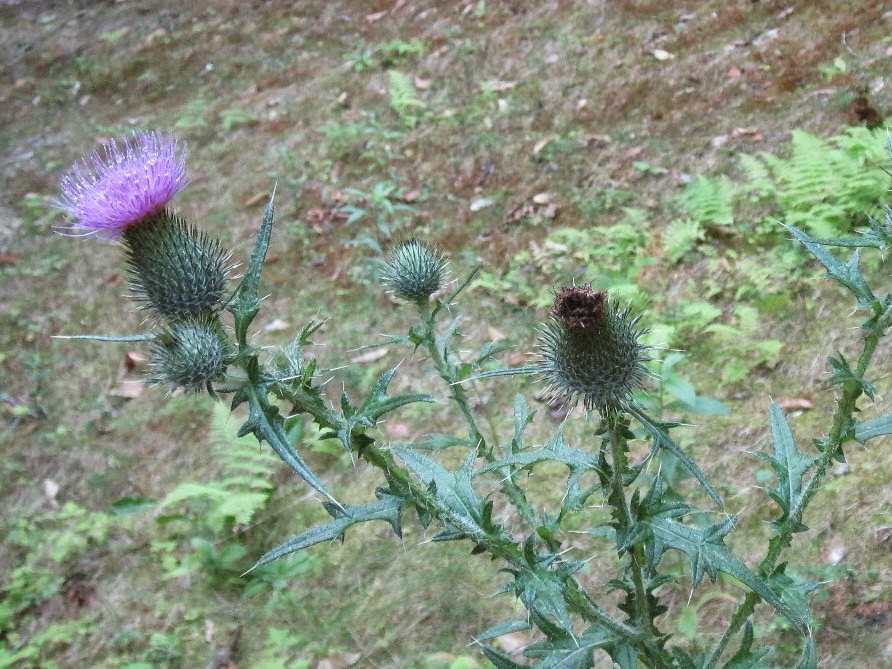 The blossoms are an excellent source of nectar, frequented by butterflies and bees.  It is also the national flower of Scotland! 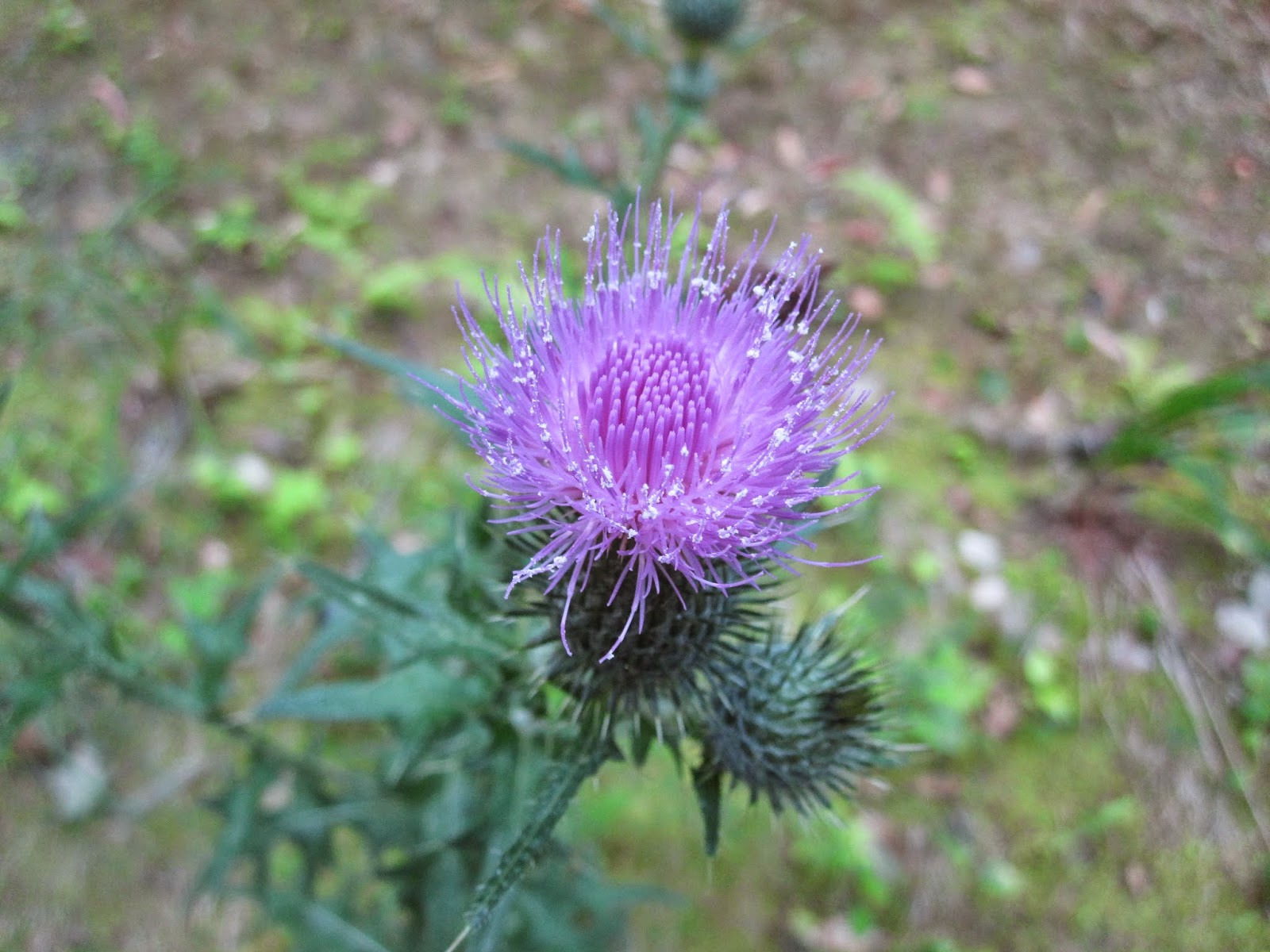 The thistle is an ancient Celtic symbol of nobility of character, for contact with a thistle will yield certain punishment.  Here is a legend of how it became the symbol of Scotland, according to
John A. Duncan's "Scottish History Online":

The prickly purple thistle was adopted as the Emblem of Scotland during the rein of Alexander III (1249 -1286). Legend has it that an Army of King Haakon of Norway, intent on conquering the Scots landed at the Coast of Largs at night to surprise the sleeping Scottish Clansmen. In order to move more stealthily under the cover of darkness the Norsemen removed their footwear.

As they drew near to the Scots it wasn't the only thing hiding under the cover of darkness. For one of  Haakon's men unfortunately stood on one of these spiny little defenders and shrieked out in pain, alerting the Clansmen of the advancing Norsemen. Needless to say the Scots who won the day.

Enjoy your quest for birds around Lake Wicwas, large or small, with care - and sturdy shoes!
Posted by Scott Powell at 7:53 PM