What a winter so far - lots of snow, cold temperatures, and no rain!  Sunday night we had the coldest weather Lake Wicwas has seen in a couple of years:  13.4 degrees below zero.  It hasn't been that cold since 2009, when it got down to -21.6 degrees on January 17th.  That, by the way, is the coldest temperature I've recorded since I started keeping records in 2002.

The storms have been coming mid-week this winter, which isn't great for the school schedules or commuters, but it's great for weekend sports, with fresh snow and good weather for the weekend.  This weekend was beautiful - partly sunny and warm (near freezing) temperatures.  Today there was a group out ice fishing, complete with gas grill for their lunch.  They had only caught a couple of perch when I went by in the late morning.  They used an interesting technique to pick their fishing spot - they drove out on the lake until their ATV got stuck in the slush, and that's where they fished!

I still don't understand exactly why there is so much slush under the snow even when it's been so cold.  Between the top 6" of snow and the firm ice, there's a good 6" of slush.  I know snow is good insulator, but where does the heat come from when there's cold ice below, and cold air above?  My best guess is that IR radiation from the sun penetrates the snow until it hits the dark ice where it gets absorbed, melting the bottom layer of the snow.  Any better ideas?

I skied around the marshes and swamps on the west side of the lake looking for signs of otter, but I didn't see any.  I did see tracks of smaller weasels on and around Sheep Island.  It was likely a mink, as the tracks frequently went down into the lake at holes along the shore line. 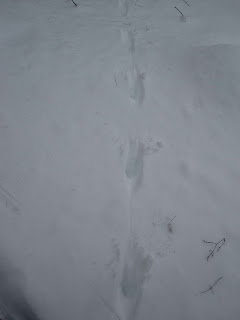 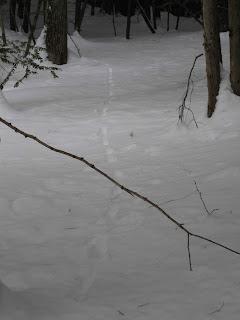 Weasel's leave a tell-tale two by two track, and this one followed my ski trail for a while, enjoying the easier going in the deep snow.  It then took a pretty straight path up into the woods away from the lake.


There are also lots of fox trails all around the lake with the weekend's warmer temperatures.  I found what seems to be a fox super-highway, with lots of tracks all leading into and out of this stream.  All these tracks were made since the last snow on Thursday.

The house construction on the north side of the lake is coming along nicely - people who come back in the spring may never know it's been rebuilt. 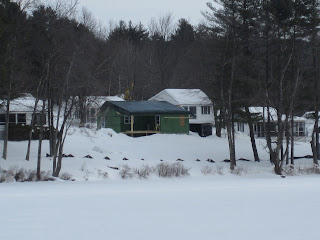 And I was quite surprised to see that the docks on Byrant Island have been removed!

There are two more storms projected for this week - there may be new snow yet again next weekend!